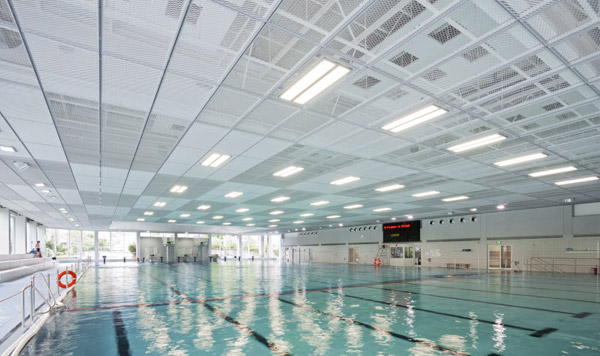 The Querenburg indoor pool was outfitted with a new extruded metal suspended ceiling during the makeover. Photo © Lindner Group

Swimming pools have a long tradition when it comes to recreational activities. Municipal and local authorities have set themselves the task of promoting this leisure activity. Not only to counter the growing numbers of people who can’t swim, but also with a view to preserving pools as an institution conducive to good health. No easy task as many pools were built back in the 1970s and need refurbishing both technologically but also as regards their appearance. Given rising energy costs, outdated filter and heating systems are no longer viable. Moreover, the dismal design guests sometimes encounter offers little incentive for them to stay on after their swim. So the aim is to modernize swimming pools and make them attractive again. For example, by installing metal ceilings from the Lindner Group’s own production. Not only do they meet the new technical requirements of a pool, they also considerably improve its appearance.

Take the Querenburg swimming pool in Bochum. Built in 1978 the pool needed a complete makeover: The ceilings and filter systems were ramshackle and the asbestos used at the time had to be removed. Cladding the walls, floors and ceilings posed a particular challenge as their surfaces must be corrosion resistant, since the warm, humid air with a high chlorine concentration damages the structure. Difficult conditions, in other words. But the modernization work was more than worth it.
The unappealing bare concrete walls were painted white; showers, toilets and changing rooms were also modernized. All the filters were replaced and a heat recovery system was installed. The client decided against having new tiles in the pool itself and had it clad with stainless steel instead. This not only looks smart, but is also easier to clean. The Lindner Group was responsible for installing the new ceiling, choosing the expanded metal suspended ceiling LMD-St 213 BWS: It works very well visually because the “mesh” pattern resembles a chessboard, and thanks to the galvanized steel it appears delicate and transparent, while the integrated light solution provides the best possible lighting for the hall.

The Lindner Group was also involved in modernizing the Massing swimming pool. The public baths on the market square in the Rottal-Inn district of Lower Bavaria was equipped with a central heating system and heat exchanger. A new paneled ceiling in Dolomite white and a segmented cassette ceiling in yellow create a pleasant, friendly atmosphere. Moreover, both metal ceilings are protected against corrosion (C4L) so chlorine cannot damage them. The modernization paid off for the both ecologically and financially, as the measures have resulted in considerably lower energy costs.

The Querenburg indoor pool was outfitted with a new extruded metal suspended ceiling during the makeover. Photo © Lindner Group 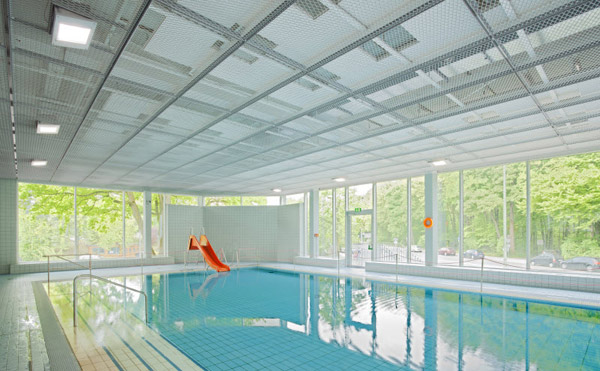 The ceiling is ball-proof, as is the integrated lighting solution. Photo © Lindner Group 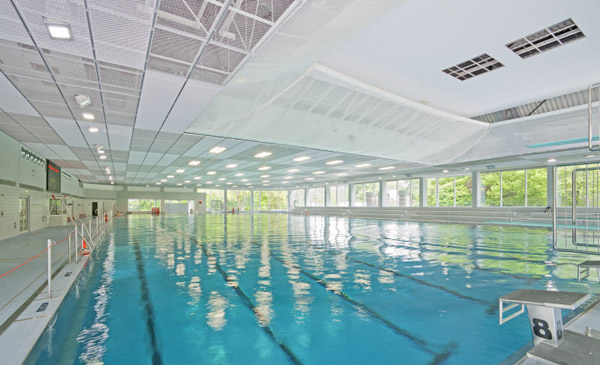 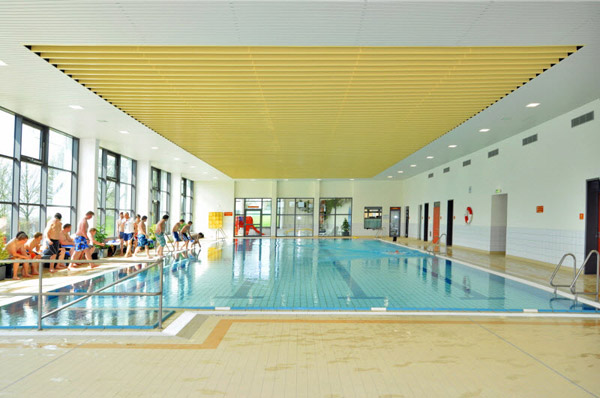 A cassette ceiling in Dolomite white was chosen, with a service life of as long as thirty years. Photo © Lindner Group 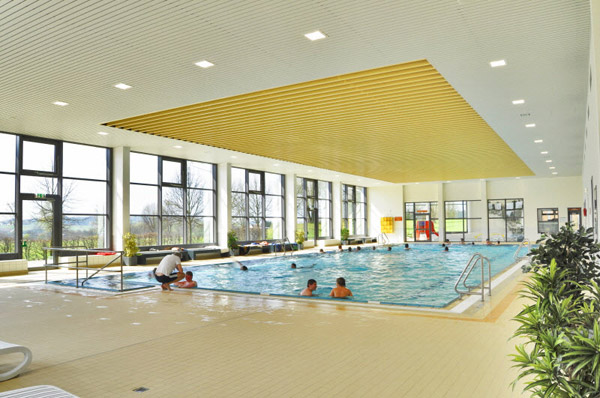 The metal ceiling is not only corrosion-resistant, but creates an attractive pattern above your head. Photo © Lindner Group
Advertisement