The networked house is in fact nothing new; indeed, the topic has been flitting through the media and trade fairs for many years. And so the systems that can network anything with everything celebrated another revival at this year's Light+Building: a feast of screens, integration solutions and apps for Apple and for the first time also Android mobile devices. Now these systems, almost all of which build on the KNX communication standard, even encompass the operation and monitoring of household appliances, the bathroom and even the garden. Electronics specialist Busch-Jaeger is collaborating with Gardena and integrating garden lighting and motion detectors into its building automation.

Why, we might ask, do we need good old switches, if everything is controlled via a touchscreen on the wall or your own smartphone. The answer: because there are still only few private developers opting for an integrated system. It may be the necessary investments putting them off, the uncertainty as regards standards and certainly also the psychological hurdle of putting your own home in the endless update loop, too. But that will presumably change as soon as the smartphone generation starts building homes. What is far more important is how the shiny new control system will find its way into the home. For the more advanced and integrative home networking becomes, the more the usual market conditions will change. Thus the previously strictly separated realms of electricity, heating and sanitary facilities, window and shutter manufacturers and IT have to work together. This ultimately means dissolving traditional boundary lines between the crafts, between planners, specialist suppliers and skilled tradesmen. Yet it is precisely tradesmen who are reluctant to seize the new possibilities and see them as an opportunity to hone their profile in terms of quality and improve turnover. The system manufacturers have realized this and are working on simplifying the configuration of the systems and also offering the end user simple setting options aside from operation. That should definitely help. However, even with simplified operating concepts a committed planner and a skilled tradesman who thinks outside the box of cable ducts and plug sockets are essential. Naturally, the manufacturers are happy to help look for such specialists.

Voices from the plug socket

Talking of plug sockets, they are going to become even more important, and versatile, with the growing digital device zoo. There were various new derivatives on show at Light+Building: plug sockets with LED orientation lamps and integrated USB chargers, inserts with W-LAN access points and Web radios. Interesting developments that can really increase the value added of home sweet home. They also include dimmer switches and universal dimmers optimized for LEDs such as by Berker, which are excellent for the harmonious and flicker-free control of halogen lamps, LEDs and even energy-saving lamps.

Back to home networking, where various communications standards now meet: the internationally established KNX technology and IP standard from the world of networking. KNX networks technical domestic components, i.e. heating control, sun protection, lighting and household appliances, while IP opens the system to the outside, to stationary or mobile interfaces which can be used to control the home network via iPhone or iPad. KNX and IP can now be better linked to each other in the home via servers or gateways. That said, IP is evolving into the standard for door communication. Siedle was one of the companies to show how, with the system "Siedle Access".

As the manufacturers see it, in future building technology, i.e., checking consumption values, status reports, preset programs or 'everything off' modes, will be increasingly controlled by means of small or large wall-mounted touchscreens. Their interfaces are definitely moving in the direction of more intuitive operation, in part with room images or floor plans and with clearly identifiable icons. Precisely in complex networking systems their representation via interface is a challenge; after all the various levels on the display screens, which although they are getting bigger are still limited in size, need to be user friendly. The brand Mertens, owned by Schneider Electric, has taken a graphically and structurally very clear approach with the system "Uniq", which can be shown on a PC or even television via Web interface. Clear symbols and visualizations of readings make "Uniq" a fun system to use.

The positive influence of Apple usability can be felt everywhere, even if the optics differ. That said, the hardware often lags behind the Apple benchmark: only a few screens are able to keep up in terms of brightness, sensitivity and image composition. This is in reality not all that dramatic, but thanks to the ubiquitously celebrated proximity of Apple's big and small "i's" we expect the same performance.

Hitherto home networking was only really able to be properly realized in new or extensively renovated buildings. With the "eNet", Gira and Jung, like Schneider Electric before them, are tackling the actually much larger market of the old building awaiting cost-effective modernization. The "eNet" is a bidirectional radio system including transmitters, sensors and actuators. It is operated via hand or wall transmitters, touchscreen or iPhone app, if it has an integrated "eNet server". A great idea, as it is also mobile and can thus be used in rented apartments. Jung has also come up with a further innovation, namely a small-format alternative to large operating screens. The "KNX Smart Panel" is compact and combines the touchscreen with touch keys on the glass front.

The Swiss system "Digitalstrom" is also interesting in this context. Here small modules that can be integrated in multidirectional sockets, luminaires, shutter drives or other electrical devices subsequently network the building in a simple way. The control signals are modulated onto the 230 volt power supply, which saves additional cabling. Here, too, smartphones can be used to operate the systems.

The iPad as door opener

Alongside the big all-rounders there are manufacturers that are deliberately focusing on a smaller field. Trivum from Stuttgart for instance, whose systems are rooted in the area of multi-room audio and control building technology using KNX. Or Siedle, the door communications expert based in the Black Forest. The abovementioned "Siedle Access" software solution links building access with video and audio, media control and internal IP telephony. It is based on a structured network with standard components that links all users. This is particularly interesting for buildings with several residential units as well as companies, which can also use the intercom function between branches via the Internet. In principle, the system, which uses a dedicated server, permits a virtually unlimited number of participants. Users can manage "Siedle Access" from an iPhone or iPad app or a Web interface on a PC.

Alongside convenient features, which we may or may not need, the control of energy efficiency is a key argument in favor of networking. The monitoring of individual systems or devices enables them to be optimally configured – from the flow temperature of the heating to lighting. And in the context of upgrading the electricity grid, the grid-compatible operation of household appliances, local electricity storage devices and the feeding-in of photovoltaic electricity will become highly important in future. Thus for instance, high-energy and non-time-critical devices will operate when electricity is cheap and suppliers indicate such. Or self-generated PV electricity will only be fed into the grid when there is demand for it – if not, it will be available for own consumption or flow into the E-Mobile battery at the networked charging station. These intelligent networks, also called smart grids, are designed, among other things, to balance out the fluctuations in regenerative energy sources. Yet because this requires a building networked on both the inside and the outside, this is set to become an important component of green energy policies. 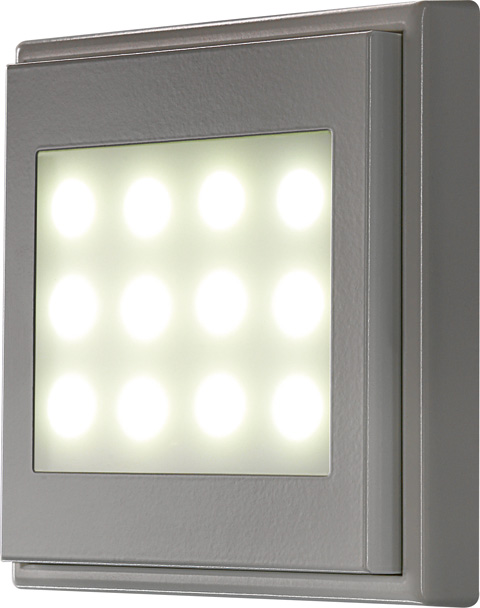 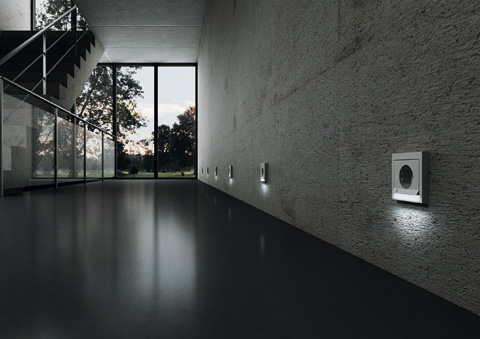 Even sockets are multifunctional: here an example by Berker with integrated LED guide light, photo © Berker 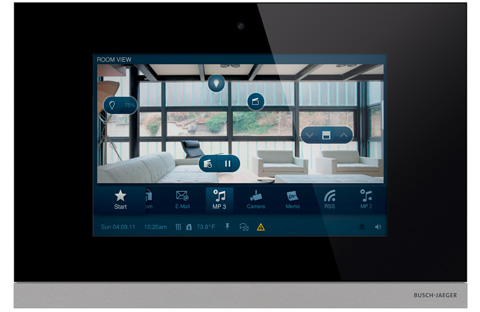 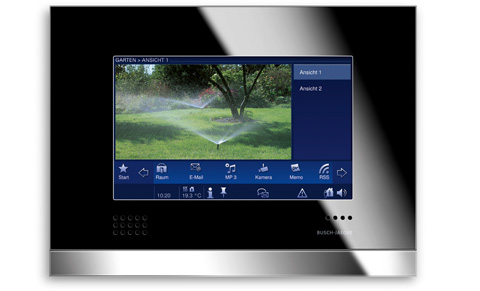 The integration of garden functions is new and the result of Busch-Jaeger’s collaboration with Gardena, photo © Busch-Jaeger 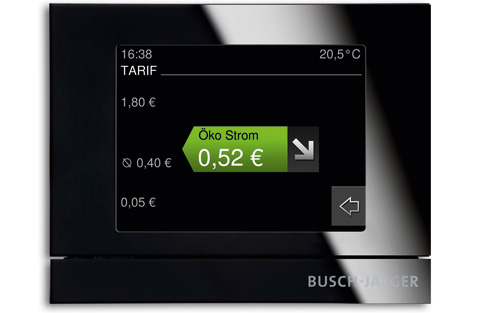 For checking rates in real time: “Busch-EnergyControl” shows the latest fluctuations in electricity prices. This function can become particularly important for the future use of the electricity grid, photo © Busch-Jaeger 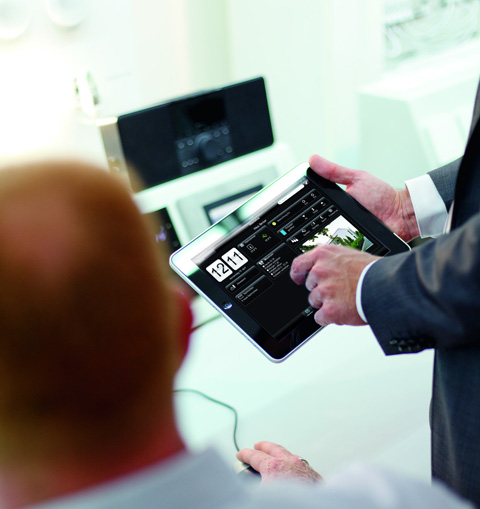 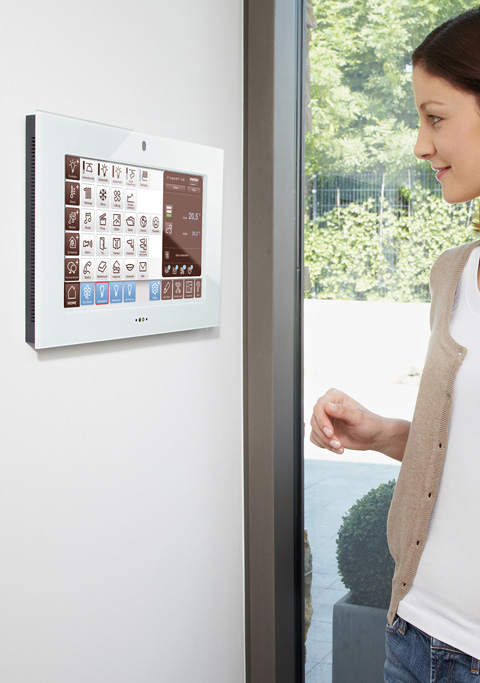 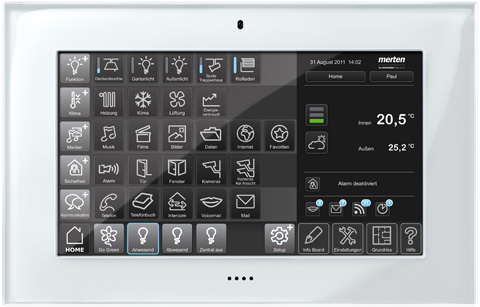 Merten has filled the “Uniq Interface” homepage with a multitude of icons and snippets of information. This gives you a quick overview and ensures uncomplicated use of the various functions, Photo © Merten 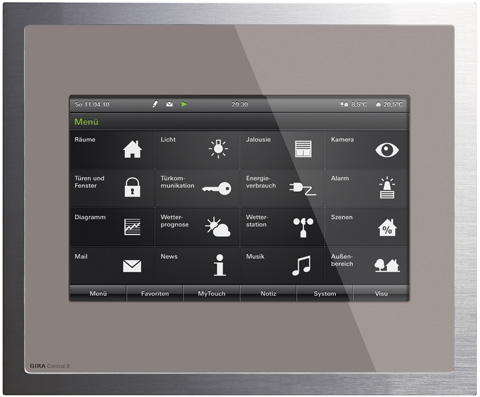 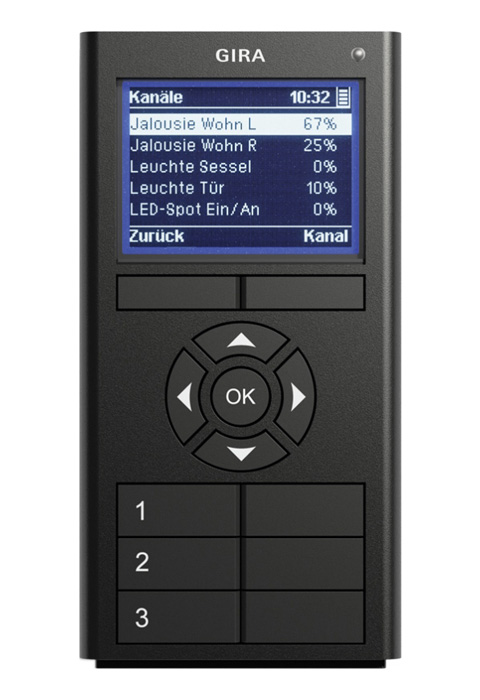 Remote control for the “eNet”, enabling subsequent networking without the need for new cables, photo © Gira 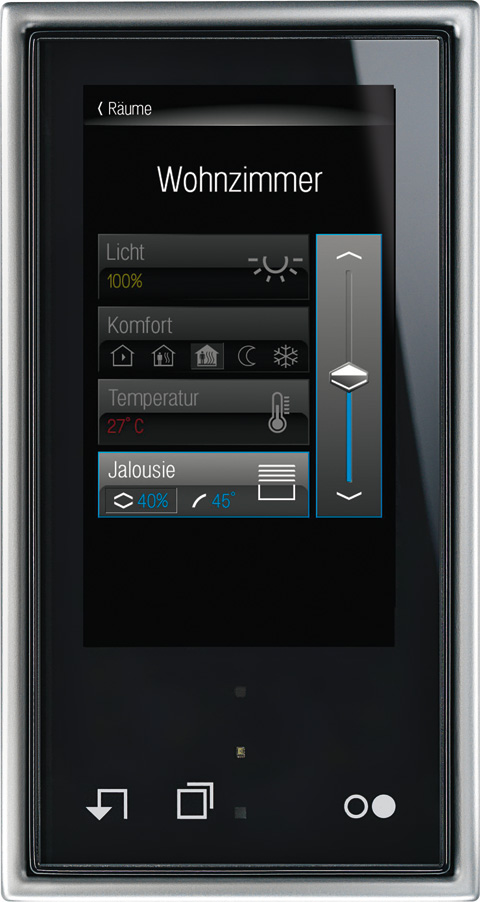 The screens are not only getting bigger, but also more compact: the “KNX Smart-Control”, small TFT touchscreen with additional touch keys by Jung, photo © Jung 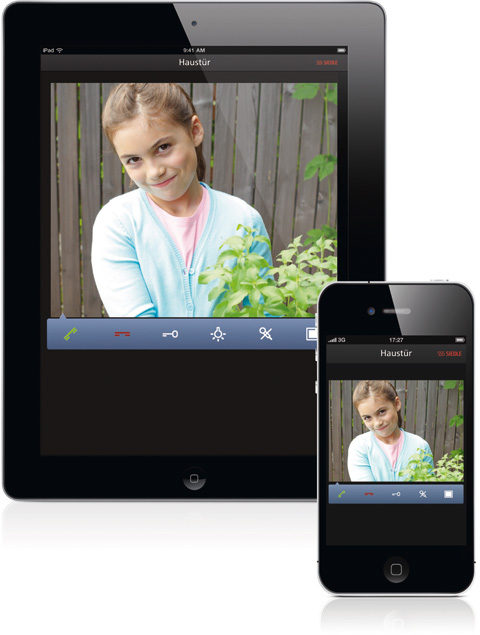 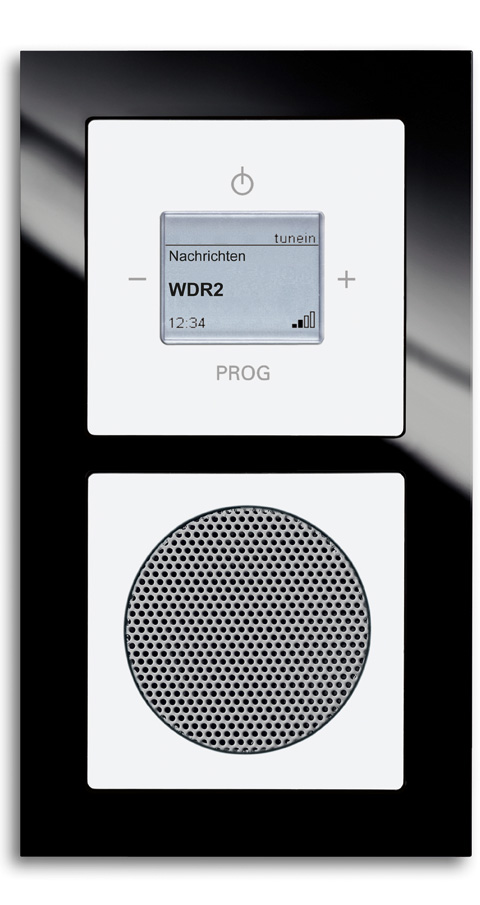 The W-LAN Internet radio is mounted on the wall. Although the idea is not entirely novel, here it is perfectly realized in formal terms. Stereo solutions are now also available, photo © Busch-Jaeger 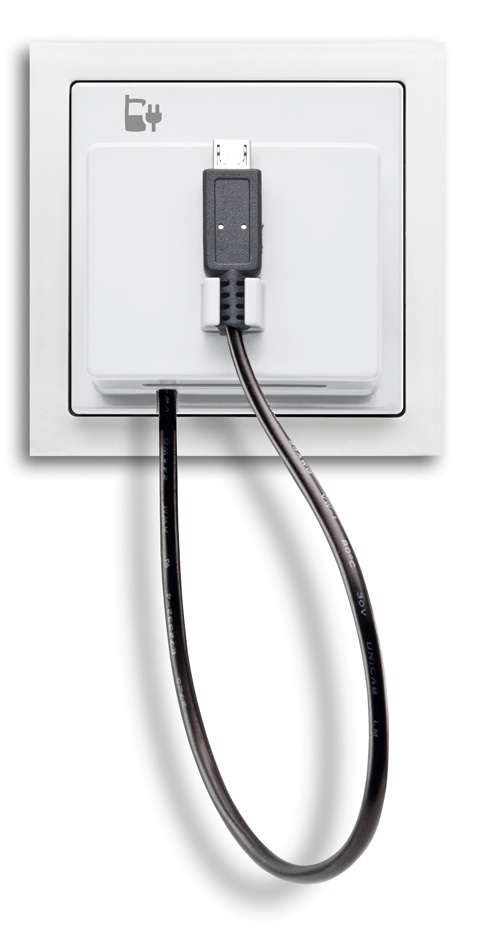