The comforting message from this year's IAA motor show is that there is no need to reinvent the wheel. Yet just about everything else that has anything to do with the use of contemporary automobiles is under scrutiny: It really doesn't matter if we are talking mild, full, plug-in hybrid or purely electric car: In addition to electric technology suitable for everyday use there is a call for new business models for manufacturers, automotive parts suppliers and workshops, but primarily for new types of car. Whereas nowadays competing marques and manufacturers are already jointly developing parts in order to save money, we are also still conducting research into hydrogen fuel cells and electric cars, "consistently multi-track" is how Daimler CEO Thomas Weber refers to it. But are we actually going put a nationwide infrastructure in place for any from of technology that comes into question? So in future, in addition to liquefied gas and natural gas - which already have advantages in terms of costs and consumption, battery exchange points and hydrogen and electricity stations?

To date car shows displayed technology if anything as an alibi. Engines, polished to a shine and without a single drop of filthy oil moved slowly and silently on the fair stands, as if this had long since been the age of the electric car. Research into all these concepts has been being conducted for years now, with a breakthrough repeatedly being promised in the near future. This can only happen if manufacturers and engineers are made to feel the pressure of the market and the law. For the moment the goal is not exactly clear. Are electric cars to be produced in order to reduce emissions and to replace the scarcely efficient combustion engine with better technology? Is the peak of world oil production so close that technical alternatives need to be introduced forcibly and with political pressure? Or are the alternative drives just what they have been over the past few decades: one of many PR options.

The US consumer lawyer Ralph Nader, who in the mid-1960s with his book "Unsafe At Any Speed" pushed forward the debate about car safety, thinks little of announcements. "The industry loves going back to the future," he says. "It has been doing so for decades." New developments keep being announced, but they are never going to materialize as long as enough money is being made with conventional technology. And indeed: What other branch would we allow to regularly keep feeding us with "studies" and "show cars", that have nothing to do either with reality that can be marketed or with the actual corporate policy?

Back in 1977, mechanical engineer Jörg Linser recognized that "there is no other similarly important branch of industry that is so incapable of real innovation and nonetheless portrays itself (or which the trade press portrays) as a pioneer of cutting-edge technology as the car industry." Since Linser's polemic settling up "Our car - a planned poor construction!" appeared, a considerable amount has changed with regard to car features. Engines have become much more powerful, vehicle bigger and heavier, and in many respects more comfortable. The tendency to corrode he criticized is nowadays scarcely an item at all, whereas the reliable interplay between electronic construction groups and controls is all the more. And cars are still geared to abrasion than to longevity.

The main marketing message of this IAA was: drivers, don't worry, in future you won't have to do without anything, not size, not comfort, not speed, and certainly not acceleration. With this approach the big manufactures struck perfectly a zeitgeist which regards horrendous debts and lower taxes as no problem whatever and views atomic power as ecological electricity. And yet for anyone buying a car in 2020 there ought to be a lot of changes. Starting with the price. The electric car of the future saves on consumption, can in some cases even use braking energy and releases its torque highly spontaneously. Compared with today's production cars it could well be about three times as expensive. Where the industry is going to recoup the increased development and production costs is obvious: From buyers and tax-payers.

Cars are still all-rounders. Even in niche models you can drive to the shops, or to the coast, on the interstate and into town. So far neither legislation nor tolls have restricted us to any great extent. Only the price of gas and points on our license are in a position to affect our automobility at times. Whereas nowadays at fair stands huge sockets and long cable leading into cars have become a sign of progressiveness, in everyday life they promise if anything to be tiresome. Recharging is far more trouble than filling up. It is not a killer argument, but an additional burden, which can hardly be reconciled with the car as a liberal manifestation of individuality. Cars with correspondingly powerful engines still make a huge din. Are almost silent electric cars going to rob us of automobile swank, of a fundamental reason for the existence of modern man as we know him?

Nowadays it is designers who have the greatest difficulty delivering plausible designs for the future. The focal point of their activities is the marque, the face. They are true masters when it comes to making a Ford Ka and Fiat Cinquecento look as if they had nothing whatever in common, even though both rely on identical technology. Designers ought yet to create car sculptures that are as emotionally overcharged as possible. So now we are meant to celebrate as the pinnacle of innovation, technology which from the point of view of users will not only have advantages. A little as we Eurocentrics might like being told: Nowadays money is being made with new car models for China, South America, and India, while at present European design know-how is being concentrated here.

A widespread approach would appear to be that in terms of design everything is going to remain as it is for the moment. The shape of vehicles is not going to change. Lettering, ornaments and stickers, with which marketing suggests how progressive the technology beneath the sheet steel and plastic hood is, is set to become all the larger and more ludicrous.

From technology automobile design has in the past few years developed to the point of ignorance. This is a questionable trend, as through it cars have become neither more attractive, more efficient, nor more functional.

A popular viewpoint among laymen is that the industry has long since overcome all the technical problems associated with new drives, and that it and the oil industry have no intention of spoiling the excellent business with tried-and-tested technology. This is a half-truth. Electric vehicles have been around for a long time now, and indeed still are. In April 1899 the Belgian Camille Jenatzky was the first man to reach a speed of 100 kmh in an electric car. In 1907 AEG produced an electric car under the Protos marque, and there was even an electric truck at the time. A popular example from recent times is the streamlined Saturn EV1 two-seater, which established an enthusiastic following in California from 1996 until 2003. In 2003, however, industry, lobbyists and the Bush administration toppled the Clean Air Act, which aimed to increase the proportion of electric cars in California to up to 10 percent. In 2006 in his film "Who Killed the Electric Car?" the documentary film maker Chris Paine investigated why the experiment was discontinued and all 800 cars of those who were still enthusiastic about the EV1 they had leased rounded up and scrapped. Paine's interview partners maintain that politicians and lobbyists were guilty, but to a certain extent buyers as well, as in America there was a traditional mistrust of small cars and people there had no intention of driving "European-style". In London it is the Reva Electric Cars from India, which enable emission-free mobility and look like morphed caricatures of contemporary cars.

For new technologies to win out in cars, users must change their habits. And not give things up, but take a new focus. Why do we buy limousines if on the backseat you bump your head and knees? Who needs motorized transport if it does not offer an advantage en route to work or the kindergarten? It is we buyers who help create fashions, support them and egg them on. Possibly we should start completing ecological driver-safely training before calling out for new technologies.

The breakthrough will probably not be private owners, but companies such as UPS, with fleets running on emission-free vehicles, perhaps even e-vans such as the "Teamo", which Johann Tomforde, who invented the Smart, has developed as a van with a Boat chassis: it weighs in at a mere 700 kg. Only if we consider mobility from a holistic perspective and do not give up common sense will new drives actually spell progress. 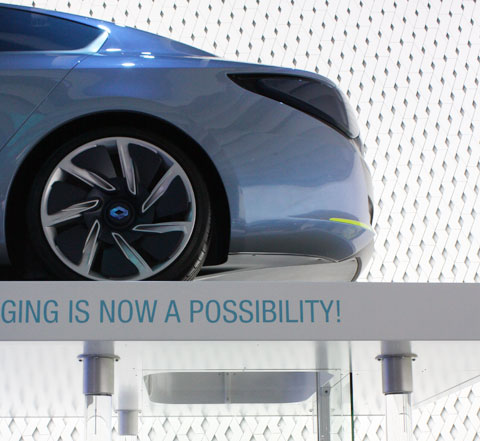 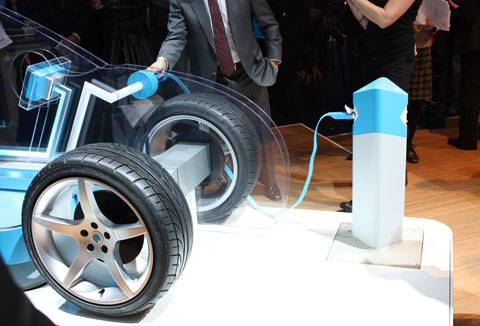 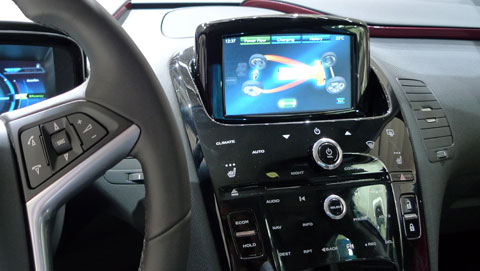 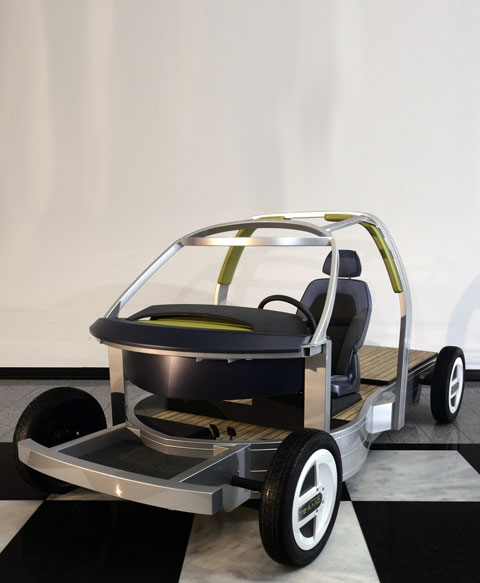 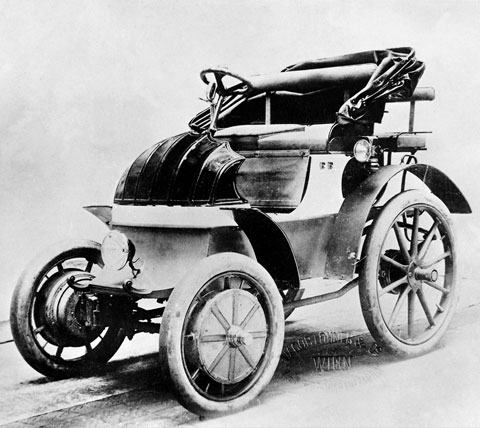 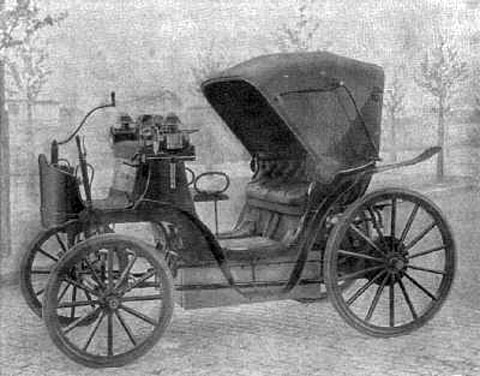 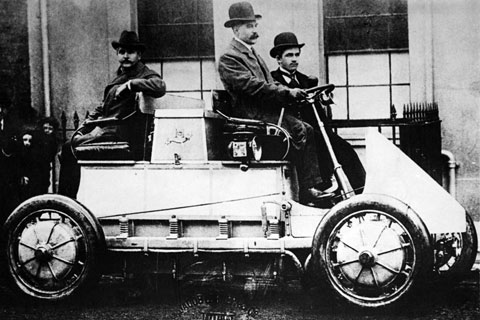 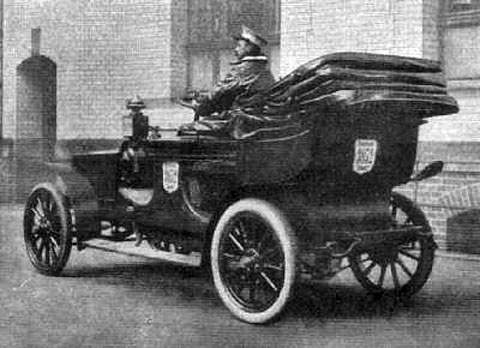 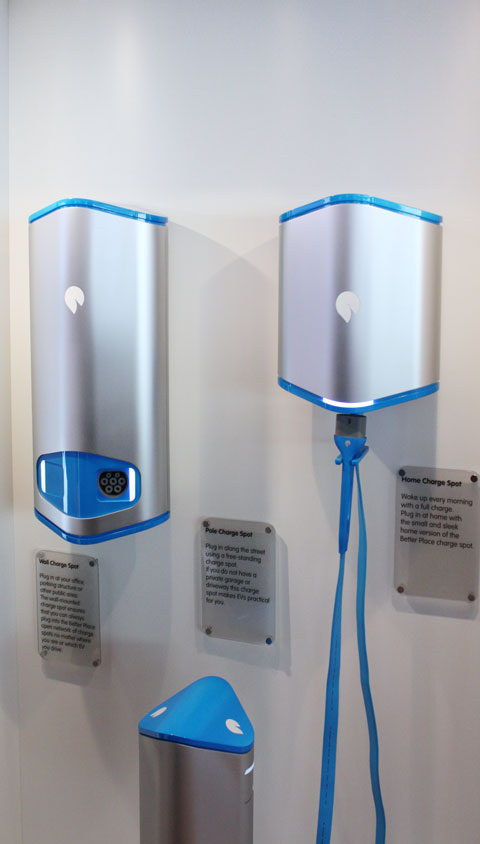 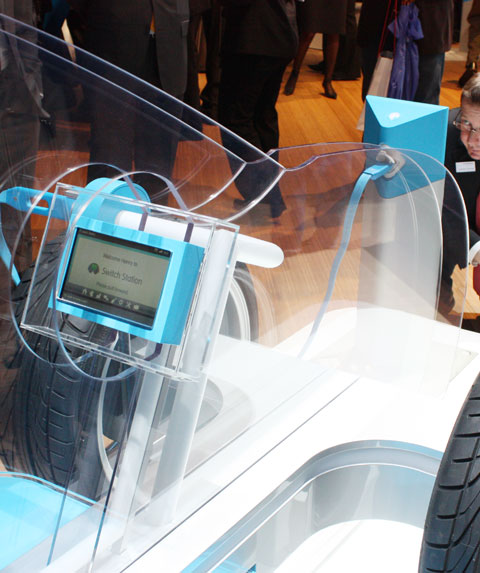 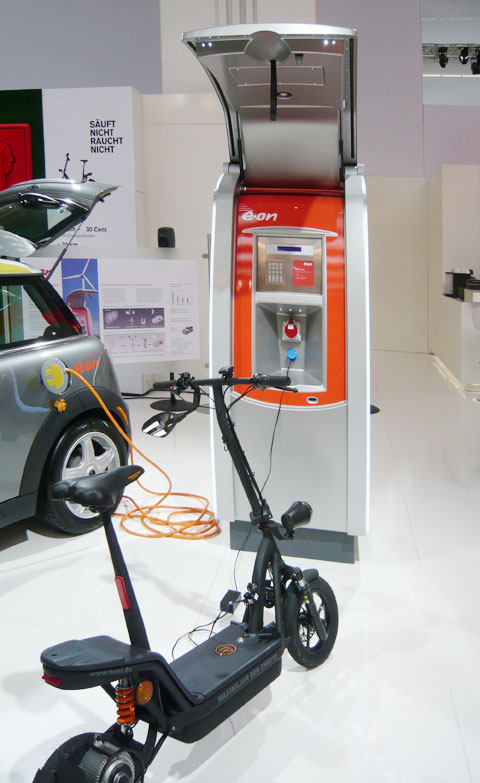 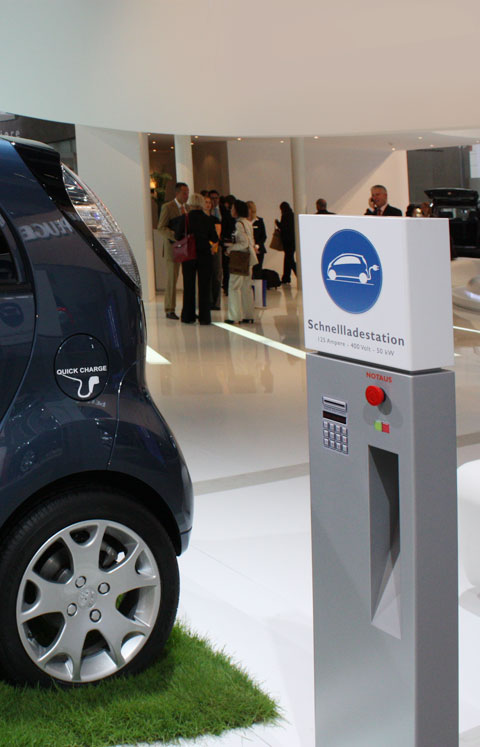 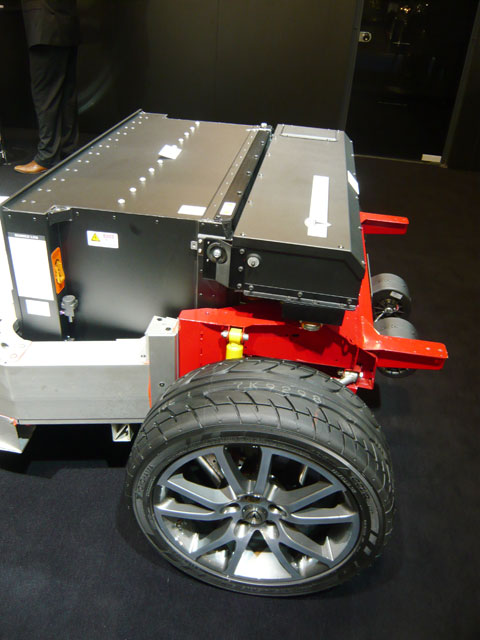 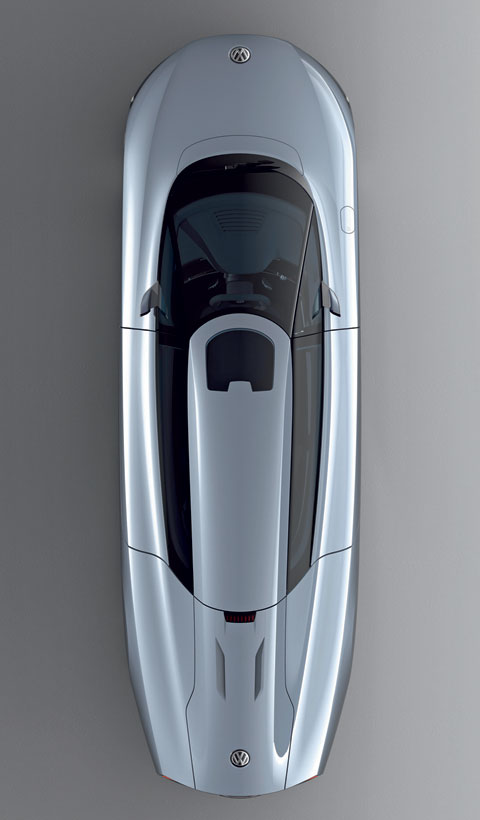 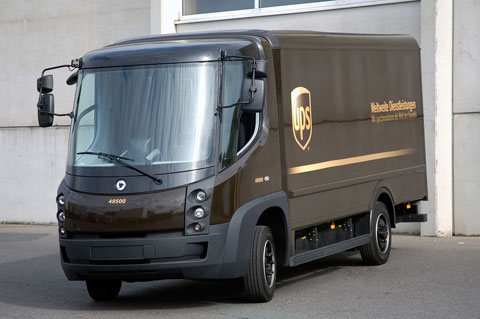 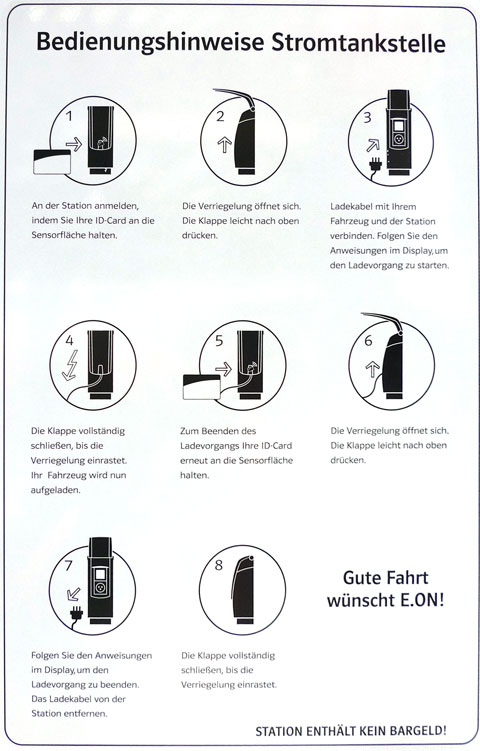