For their cultural project "Allmeinde Commengrounds" Katia und Gerold Schneider rebuild an old stable building. There they show currently the​​ subtle photographs taken by Walter Niedermayr in 2015 and 2016 in the area round Lech am Arlberg.​
by Thomas Wagner | 8/18/2017

Hearing the name Lech am Arlberg we automatically think of skiing and tourism. In this context, the name of the photographer Walter Niedermayr and the mention of the words the “appropriation of space” it appears obvious that this is a case of the damage caused by winter sports being critically appraised. And if you do assume this, you are right and wrong at the same time.

It is true that Lech is, as they say, using a phrase as complimentary as it is vacuous, a renowned tourist destination in the Austrian Alps and that the scenery around the village is used with this in mind, particularly intensively in the winter. Ski slopes, lifts, chalets, avalanche barriers and cat tracks have all left their mark on the landscape. And it is also true that since 1987 Walter Niedermayr has, in various work groups, looked at the visible and atmospheric changes to the environment that have occurred because of human intervention. And his camera has investigated not only alpine landscapes but also spatial sequences, the shells of unfinished buildings, streets and highways. For the series “Bildraum”, for example, he collaborated with Kazuyo Sejima and Ryue Nishizawa of SANAA.

It should be said, however, that presenting two opposing views is not as simple as the prevalent prejudices against skiing tourism would have us believe. After all, Niedermayr’s work was initiated by the “Allmeinde Commongrounds” in Lech, specifically by Gerold Schneider, an organizer of cultural events and hotelier, and his wife Katia. This small, privately funded, independent cultural initiative established in the year 2002 devotes itself – in the building of the same name specially set-aside for the purpose – to shaping the community on the basis of the spirit of the community. The name, as I found out, explicitly refers to the “Allmeinde”  or “Allmende”, i.e. to common property, be it physical or intellectual, whether on a local or a global scale. Its aim: To use meetings, dialogue, exhibitions, interdisciplinary research and aesthetic experiences to communicate knowledge, thus contributing to better shaping the local living environment.

Walter Niedermayr spent a week during both the winter and summer seasons of 2015 and 2016 respectively working in Lech. And he kept returning to the same places in the landscape surrounding the village in order to gradually familiarize himself with the scenery, pinpoint modifications to the topography, understand the progress of changes in the landscape and record the atmosphere. Always in several parts and often panoramic, his subsequent photographs did not merely present the crowded and often deformed reality, they approached it, in order to carefully feel their way around it without further injuring its surface, shaped and often deformed as it is by human intervention. The colors in his photos seem extremely restrained, their hues bordering on the pastel. Admittedly though, even at first glance, they bear no resemblance either to the heroic approach favored by historical photographs or to the luscious colors in those idealized postcards that proclaim the illusion that the world consists entirely of perfect Sundays.

In Niedermayr’s photographs of Lech am Arlberg – taken during the winter season, when the skiers get lost, like ghosts, in their white background, and in the summer, when the meadows are in bloom but when slopes that have been flattened out to create pistes and paths through the now sparse forestation stand out clearly and the out-of-service lift stops resemble foreign bodies planted on top of the landscape – the viewer keeps on finding eloquent details. Stating his position, Niedermayr comments “Most of my photographs give an equal weighting to the landscape, man and the infrastructure, because I always try to see things from both sides and thus to maintain a certain distance”.

Niedermayr’s photographs really do not reveal any new or clichéd scenery to us. By accentuating the uniformity of the snow-covered landscape under which the vegetation disappears in winter and emphasizing the delicate beauty of the flora in summer, he focuses our gaze on the contrasts. Because major changes are noticeable the landscape does not remain static. And we realize to what extent it is shaped by its geographic, economic and cultural reality.

Instead of offering only one perspective with a central vanishing point, Niedermayr instead “decentralizes” and expands our view to look at an environment where mountains, skiers and ramblers are not interconnected and do not appear to be communicating with one another. As Catherine Grout writes in her essay, “By preferring an inquiring position to an affirmative one, he questions commonplaces on various levels – standards in photography, the portrayal of mountains, everyday activities. At the same time he shows, where necessary, new ways of being present in an environment that is both powerful and, at the same time, fragile.” 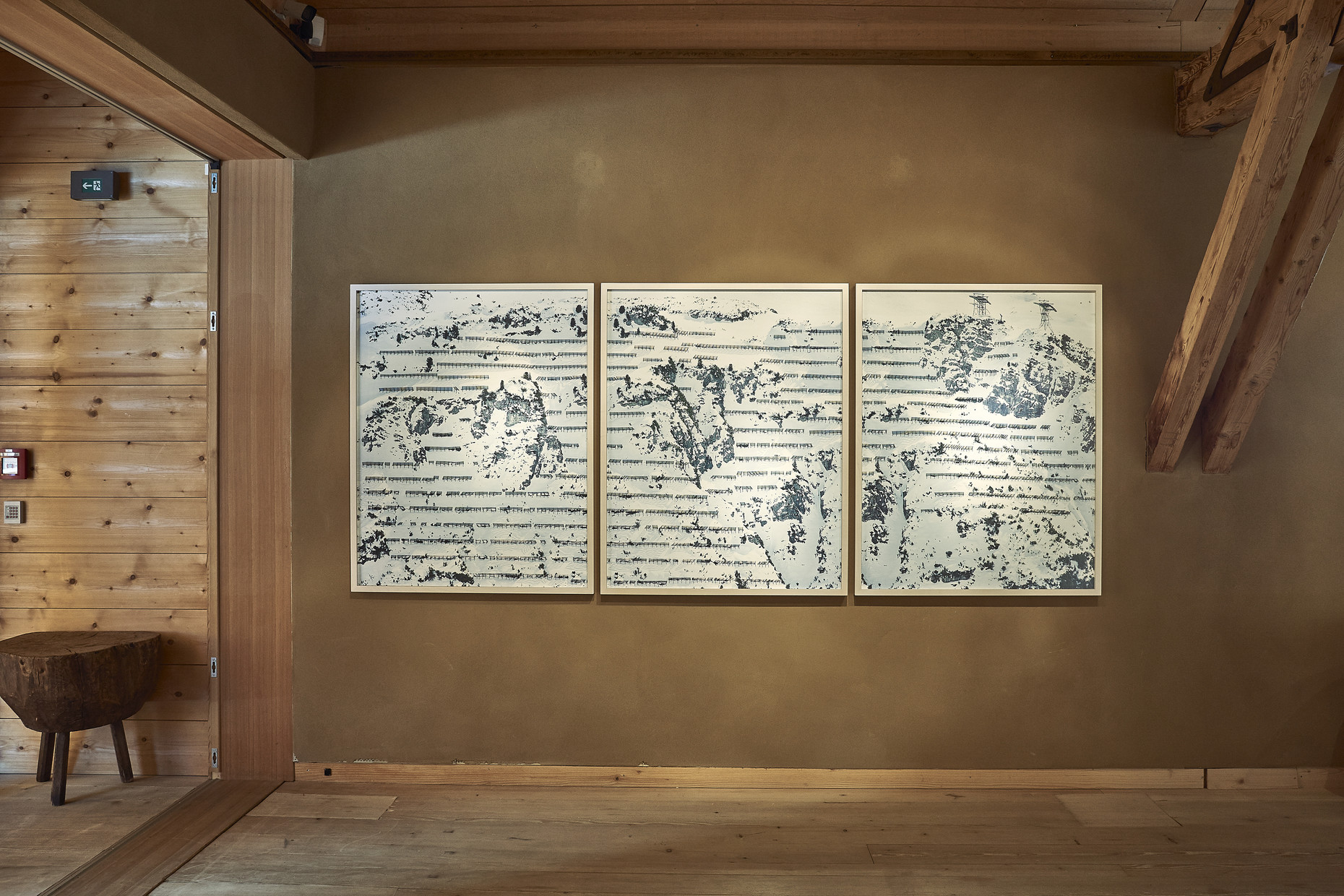 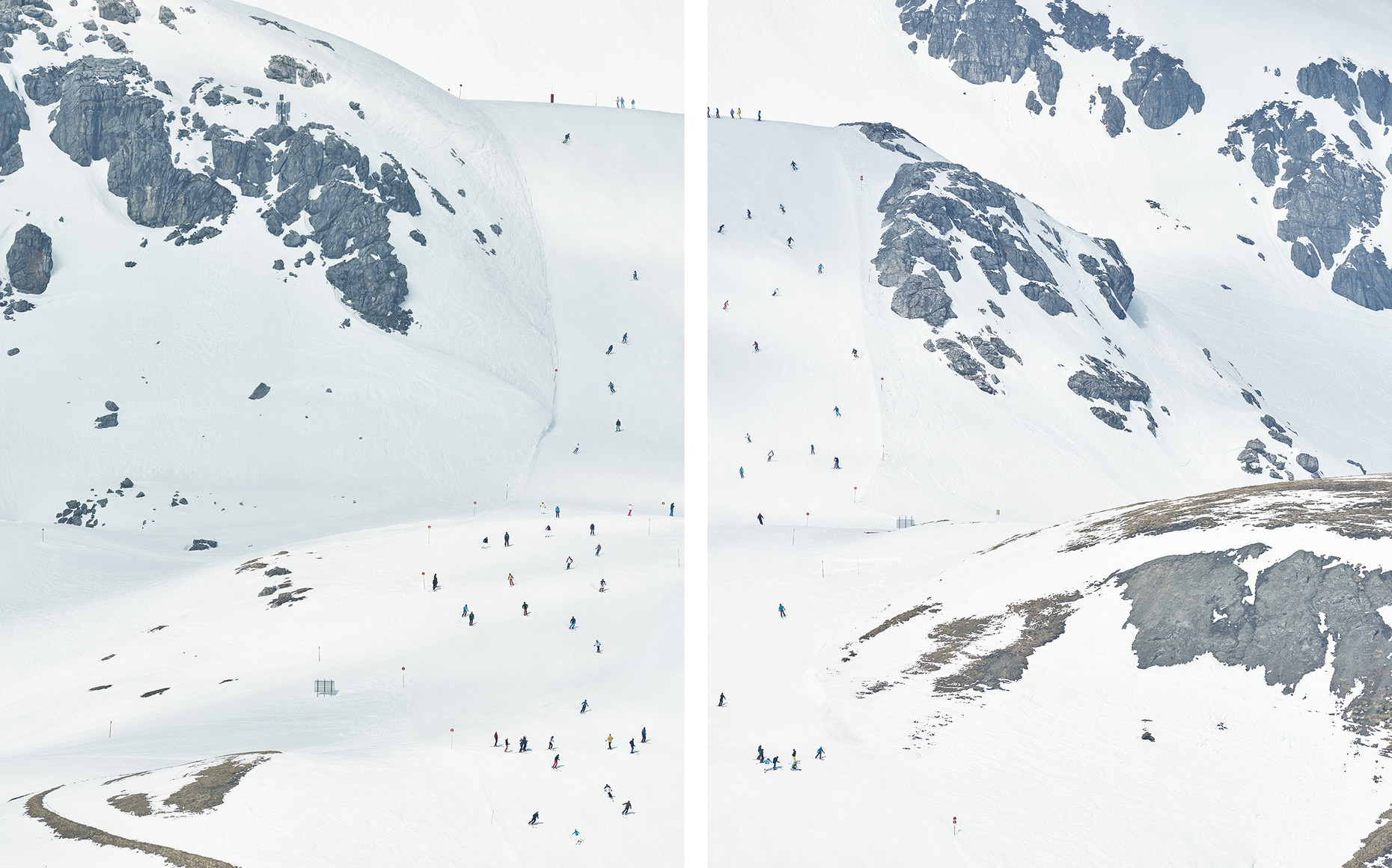 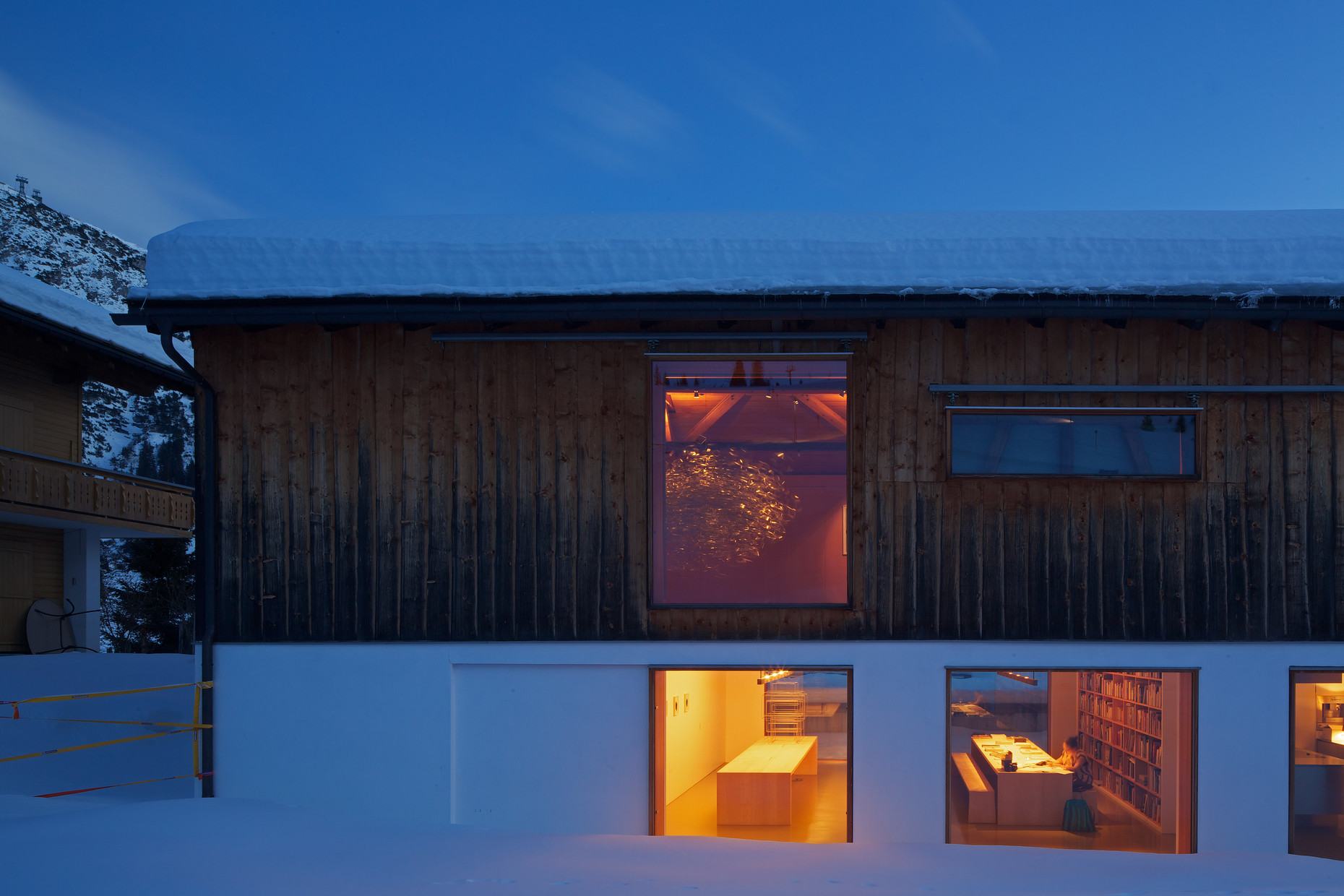