They're extraordinary even at first sight: colorful photos are laid out on long tables or assembled in back-lit boxes and repeatedly show happy children. Quite unlike the usual architectural photography, which tends to be restrained in the choice of color and to present stringently composed shots of spaces that are rarely populated by humans.

In the "Testify! The Consequences of Architecture" exhibition (it first went on show at Neederlands Architectuurinstituut in Rotterdam) the focus is primarily on the users of buildings, on the history of how the architecture came about, and its impact on society. The emphasis is less on the aesthetics of the just under 25 projects presented – irrespective of how different and in part overtly colorful the descriptions. For exhibition curator Lukas Feireiss believes the current architecture discourse is too self-centered, too little connected to real life, and limited exclusively to the experts. He finds it especially irritating that architects are hardly ever interested in their buildings after these have been commissioned – or on how the buildings then fare; hence the choice of title, "Testify". Feireiss highlights an architecture which still needs to prove its qualities.

The best example of such a dedicated architecture is the open-air library in a suburb of Magdeburg. "Lesezeichen" was built in Salbke, a district that has suffered severely from an outflow of residents; it's a strange mixture of plaza design and architecture. Along a heavily frequented road, a wall offers roofed niches on the non-road side, with seats where readers can tarry, and closed shelves for the books. Prior to realization, the local citizens took part in a design workshop the results of which were then visualized using beer crates as a life-size model for a two-day reading festival. Then, the materials chosen by Leipzig-based Karo-Architekten created a real eye-catcher. They recycled the characteristic white façade elements from a Horten department store and contrasted this with surfaces painted in a powerful green. The project is to this day run by volunteers and book donations – the total is now over 30,000. The exhibition catalog explains that the project has definitely impacted favorably on the area, houses have been modernized, but also reports that there have been instances of vandalism.

One shortcoming of the exhibition is that the photos do not sufficiently explain all the projects and you have to resort to the catalogs that are at hand to find out how they came about and how users received them. The countless panels with their short, striking quotes are no help here.

Not all the projects are convincing architecture, but what counts is the social process and the impact on the surroundings, such as with the "Eichbaumoper" by the architects at Raumlabor in the Ruhr region. Stacked containers at a subway station in the midst of a maze of highways served as the meeting point and project office. Staircases and station platforms morphed into the temporary stage for various performances by inhabitants: a contemporary opera, boxing matches, and rap concerts. When designing stops for the gaps between buildings in Saragossa the architects essentially acted as intermediaries, moderating the social projects with the locals, and providing design support. In the densely populated downtown, neglected wastelands thus became sports and playgrounds or improvised gardens. Here, the architect again acted as a trustee, as the three projects in question arose as part of building shows, festivals or modernization programs, initiated by municipal administrations and not, as one might sometimes think, at the architect's own initiative.

Alongside projects in Bangkok, Rio de Janeiro and Paris, that all follow a similar participatory approach, larger buildings around the world demonstrate how architecture can be brought to bear in improving a district. In Cape Town, for example, where a school building not only lowered the demolition rate, but also created a place of security and identification for pupils. Another school building, this time in China, bridged a river and references historical round clay buildings, thus linking the past and the present. In Medellin, Columbia, a science park serves as a tourist attraction, but also created desperately needed free space for locals and for-free learning sources for their kids. Here, the choice was not simply functional buildings as the projects made a contribution to urban and social development – architecture became socially relevant in a vein that is all too rare in the West now. Other initiatives on show such as the open-air "Cinema Jenin" in Palestine or the "Skateistan" skateboard school in Kabul achieve this and a global media presence, too – with no claims to architectural brilliance. Sometimes the design work may get neglected along the way, given all the other activities, such as that of social worker and manager. 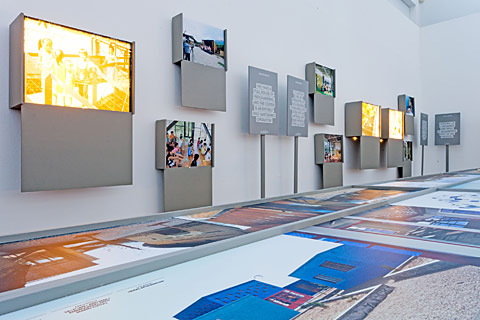 Images of construction projects worldwide are laid out on tables and in light boxes, photo © DAT/Till Budde 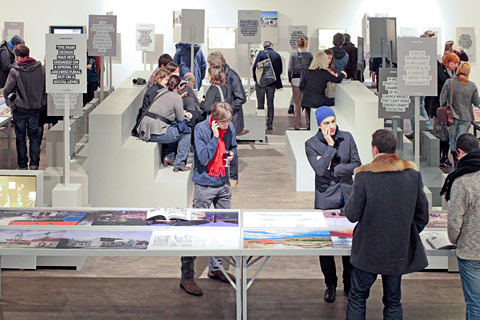 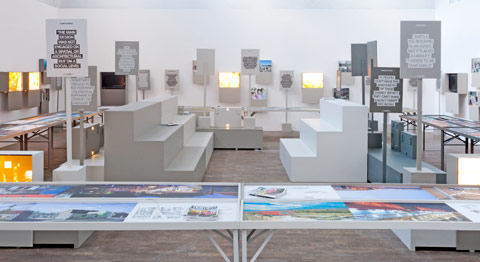 Like posters at a protest march: the panels of quotes stand out from the exhibition architecture, photo © DAT/Till Budde 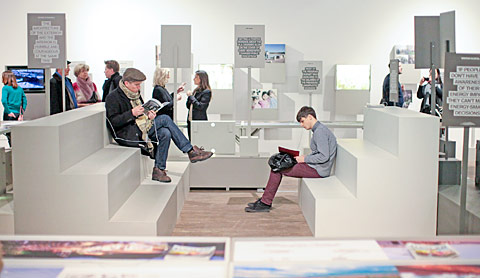 You have to rely on the catalog for background information on the projects, photo © DAT/Till Budde 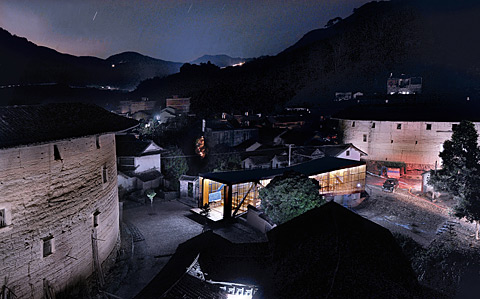 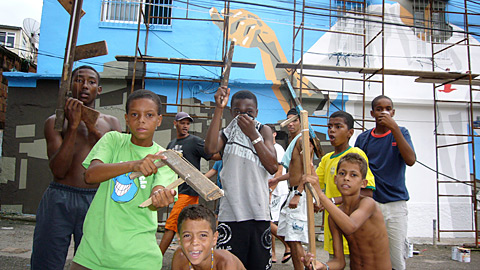 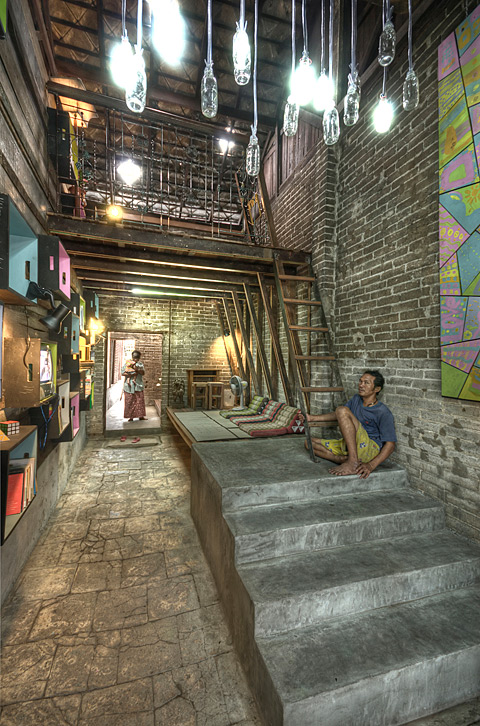 The library is a meeting point for the community of those who live at Min Buri Old Market, photo © Pasi Aalto 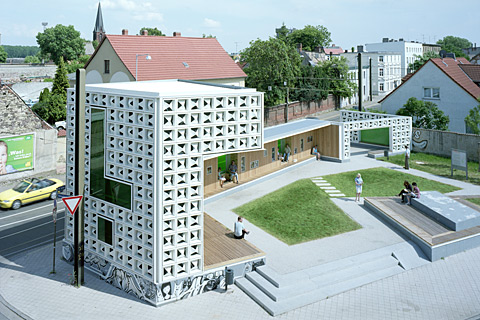 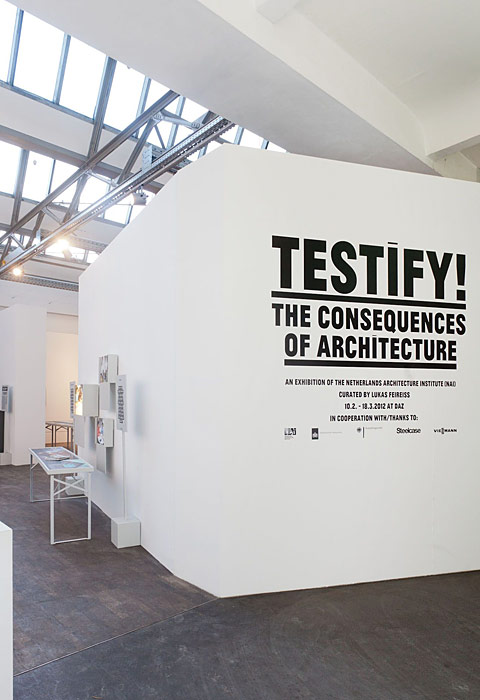 The “Testify! ‒ The consequences of Architecture” exhibition reports from the users’ perspective, photo © DAT/Till Budde 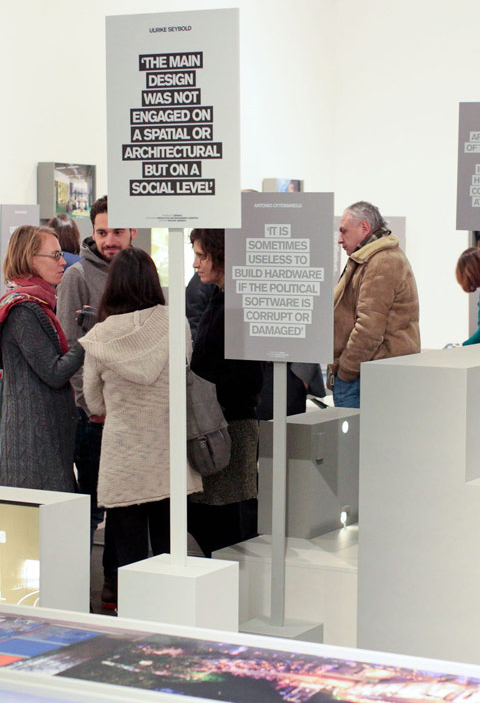 Panels with catchy quotes announce how the users reacted to the architecture, photo © DAT/Till Budde 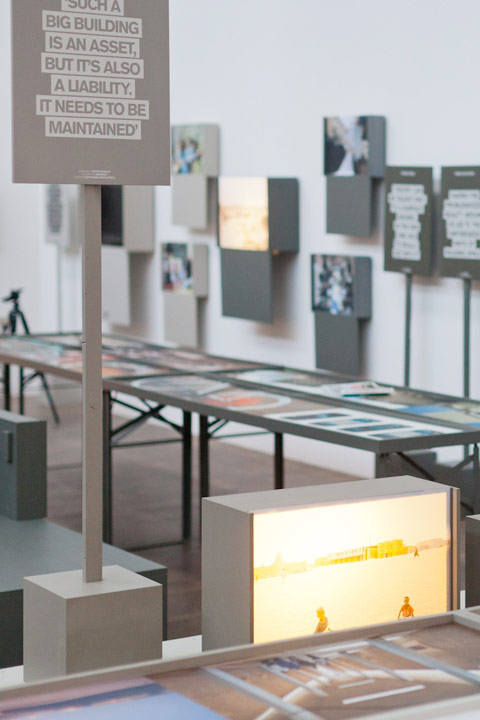 Users often complain that once a building is commissioned the architects are no longer interested in its utility, photo © DAT/Till Budde 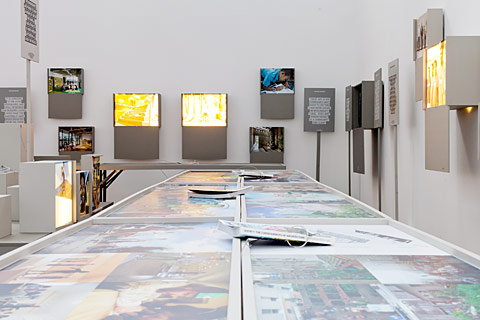 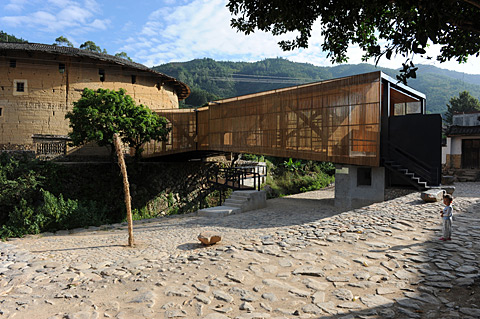 The “Bridge School” in Fujian, China, is a project by Li Xiaodong Atelier, photo © Li Xiaodong

The “Eichbaumoper” events stage in Mühlheim an der Ruhr is a project devised and managed by Raumlaborberlin, photo © Rainer Schlautmann 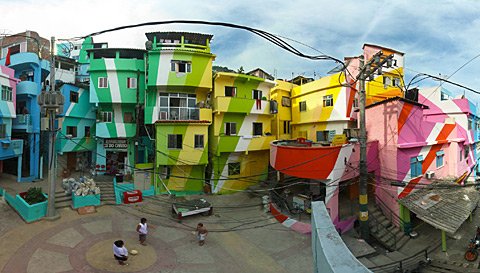 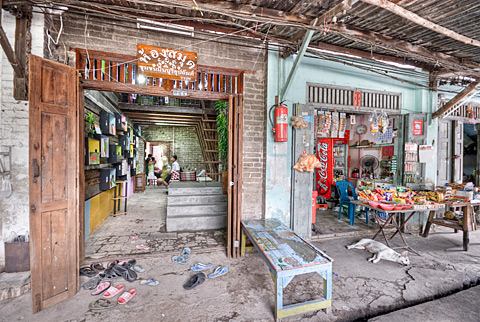 The “Old Market Library” in Bangkok is a joint project by architects TYIN Tegnestue and Kasama Yamtree, photo © Pasi Aalto 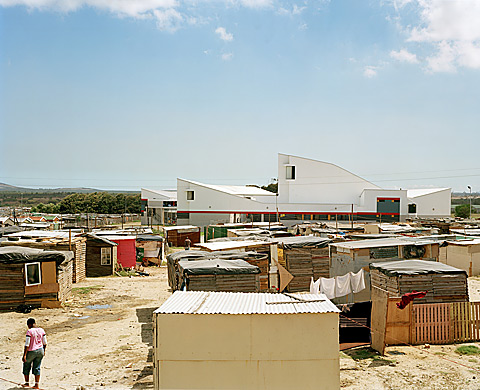 The Inkwenkwezi Secondary School in Cape Town was made with the support of architects Noero Wolff and Sonja Spamer, photo © Dave Southwood, Iwan Baan 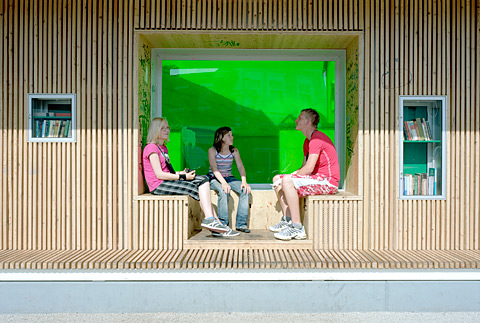 Seat niches and library display cases offer a welcome place to which you can retreat, photo © Thomas Völkel
Advertisement