At motor shows, and only there, do studies go on display that never actually make it into mass production. If you’re going to dream, then in style is the motto at Renault, where the “Symbioz” concept car comes with no less than a house as the display cabinet.
by Thomas Edelmann | 9/15/2017

Photographing beautiful cars in front of beautiful buildings is easy. Thanks to cutting-edge digital technology, location and mobile object no longer even need to come together in the traditional world of atoms and molecules. Having them meld in the sphere of pixels, bits and megabytes is enough. A far cry from the early days of the modern era: In 1928, Daimler drove its Mercedes 8/38 PS cabriolet to the recently built Weissenhof housing estate and presented the car along with a young belle from Stuttgart, allegedly an emancipated woman driver, who in reality never even had a driver’s license, in front of buildings designed by Mies van der Rohe and Le Corbusier. The latter loved featuring streamlined cars in his writings in order to recommend them as a role model for what he referred to as backward architecture. In photos of his structures with the cars of the day, the vehicles nowadays look curiously backward. The formal idiom of the architecture of that era, on the other hand, seems familiar, indeed contemporary to us. Do iconic buildings age more slowly than expressive cars?

If you ask Laurens van den Acker, Head of Design at Renault, about the state of play between buildings and cars today, and which has the edge, he mentions not an aesthetic, but rather a technological advantage on the part of present-day cars. What building opens and shuts on its own just by your approaching it or moving away from it with your key in your pocket, he asks rhetorically. Modern cars can do that, buildings not. But what is the state of play between buildings and cars actually like? Is there one at all?

Roads have long since no longer been a thoroughfare for the many, but rather something where everyone is subordinate to cars. Could that change? Not “like in the olden days”, but better, more original, more inspiring? A motor show is not really the right place to ask questions of this nature, or even discuss them seriously. And yet that is exactly what Renault has done. As is usual in the case of exciting projects, the ingredients are all familiar, but the way they are mixed, the result, is original.

The designers went for a setting in the year 2030, which revolves around an electric concept car that drives itself. It could share its data with a family home, and the car’s battery could just as much serve as a temporary power store for the house, but couldn’t it do more as well?

When doing its research, the team of young designers and architects from Renault and the French company Marchi Architectes came across well-known role models, in addition to the aforementioned Le Corbusier, Richard Buckminster Fuller and his Dymaxion Car and Dymaxion Dwelling Machine. The designers also took another look at Frank Lloyd Wright’s speculative drawings, and images of the sort of open-plan living structures Pierre Koenig came up with in the Case Study Houses in California, with directly accessible open car parking spaces.

We know from cities such as Miami, Singapore, and even Berlin that for car enthusiasts there have been real estate projects that allocate their car a space of its own in an apartment building or high-rise. For the most part these are high-performance sports cars, which, though they might be nice to look at through the windscreen, need to be carefully shielded from the living area on account of the oil and gas they have on board. That was not what interested the Renault design team. Instead of high-rise individualism, the designers focused their attention on the hideout, a week-end house, similar to those which Marchi Architectes has already designed and realized. Alongside all the “carry on in the same vein studies” in evidence at this year’s International Motor Show (IAA) in Frankfurt/Main, alongside the “let’s put another kink in the bodywork” mass-rollout cars, the Renault Symbioz is indeed a highly original statement. It can be related to the Renault design history, as it can to the show cars from America in the 1950s and 1960s, bursting as they were with technology; the Firebird studies for example, which Harley Earl developed for GM. The elongated, shallow vehicle with its rotating armchairs in front is nonetheless a present-day design. The seat belt buckles are as elaborate as a smartwatch and serve not only safety purposes but also to regulate the car seat temperature.

As far as design is concerned, Renault has been pursuing an evolutionary strategy over the past few years. Laurens van den Acker (born 1965) followed the intellectual inventor Patrick le Quément (born 1945), who as head of design from 1987 to 2009 defined the company and instilled the Renault spirit in every study and series vehicle. The Dutchman successfully paid attention to cohesion where the growing number of model ranges was concerned. At the same time, he wanted emotionality to play a major role, but without the front grille or the headlights being so exaggerated that they looked like caricatures or something from a manga comic, as had been the case with several competitors. Even more voluminous Renault models are harmonious in appearance, and in comparison less aggressive in terms of design.

A dilemma and dreamt up ways out

Nonetheless, and this is a design problem on a totally different level, Renault is no exception when it comes to exceeding exhaust emission values during road tests under real conditions. With some of its models the company even achieved record negative levels. All this was no reason to stop the Renault design team giving thought to a future that is no longer that far away. Alongside the 4.70-meter long and a mere 1.45-meter high concept car, which with a glass roof that opens upwards and double doors that meet the vehicle’s edges is easy to get in and out of, the designers have also developed a presentation setting which in the furthest corner of Hall 8 at the IAA is set to become a crowd puller. The house – a steel frame construction that can be dismantled known as “H33” – takes up design elements of the car and vice versa, from the the copper color for the cylindrical upper story down to the details of the homely interior. The house takes “Symbioz” in as a temporary cohabitant. Fully electric, the car drives itself right into the living area, onto a turntable, is then raised by means of four steel cables, before driving, slightly offset, onto the house’s terrace. You may well think it is all just a gimmick, and grinning may even think of Jacques Tati. And yet the many aesthetic details demonstrate that the designers who worked on this are no narcissistic cynics. We can look to the future with optimism. This unusual project offers inspiration, where others only delivered studies of their fluency in design. 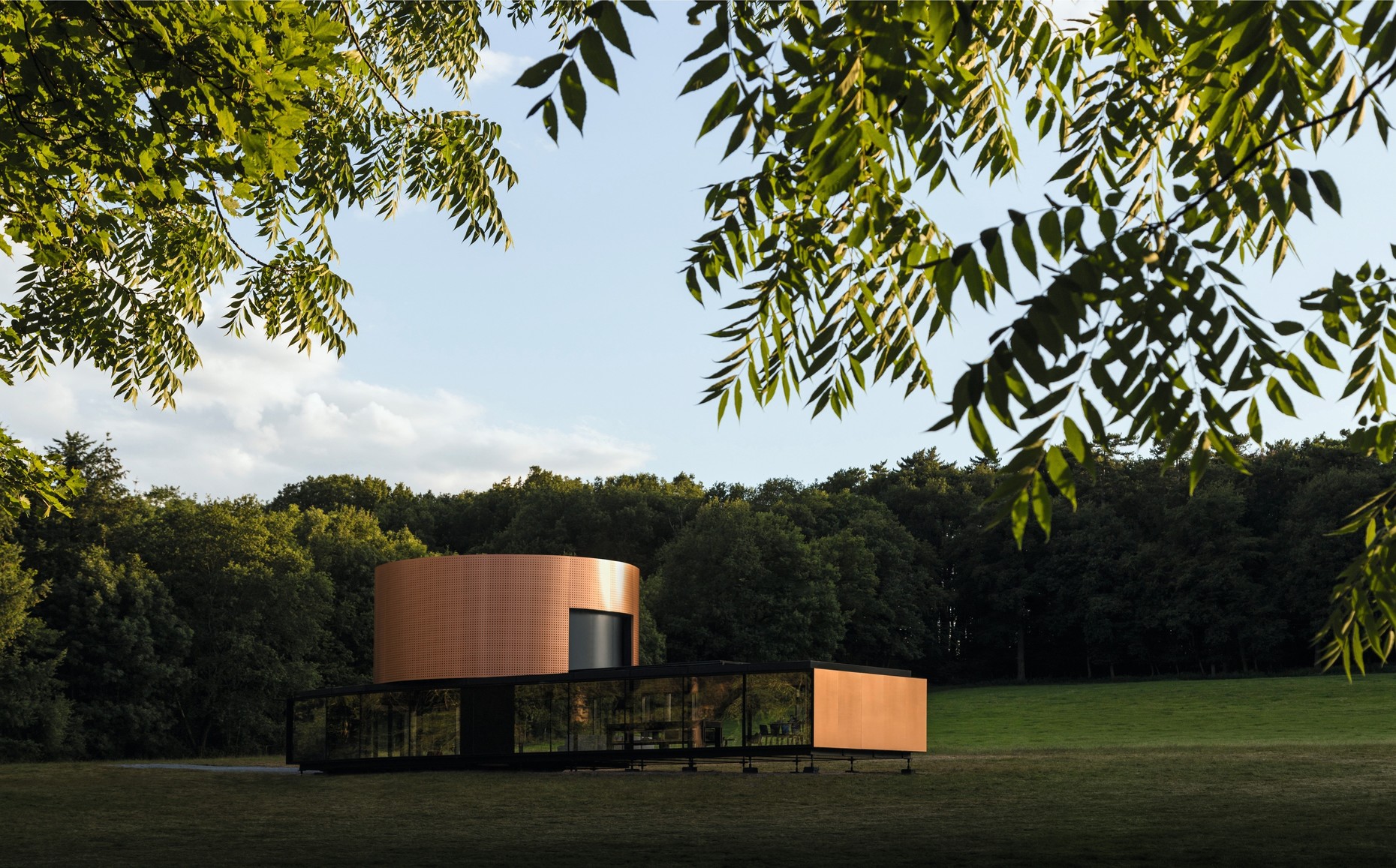 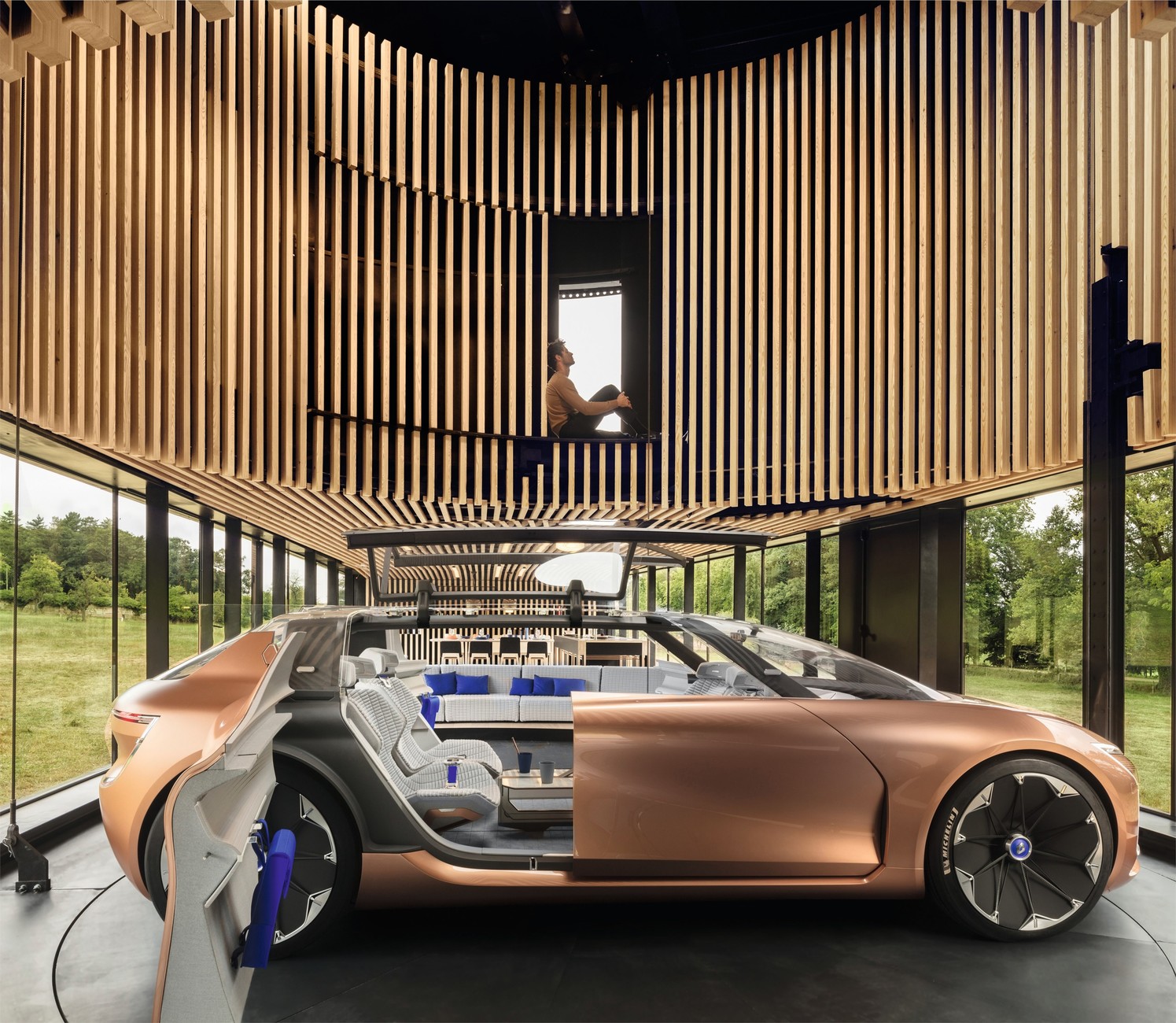 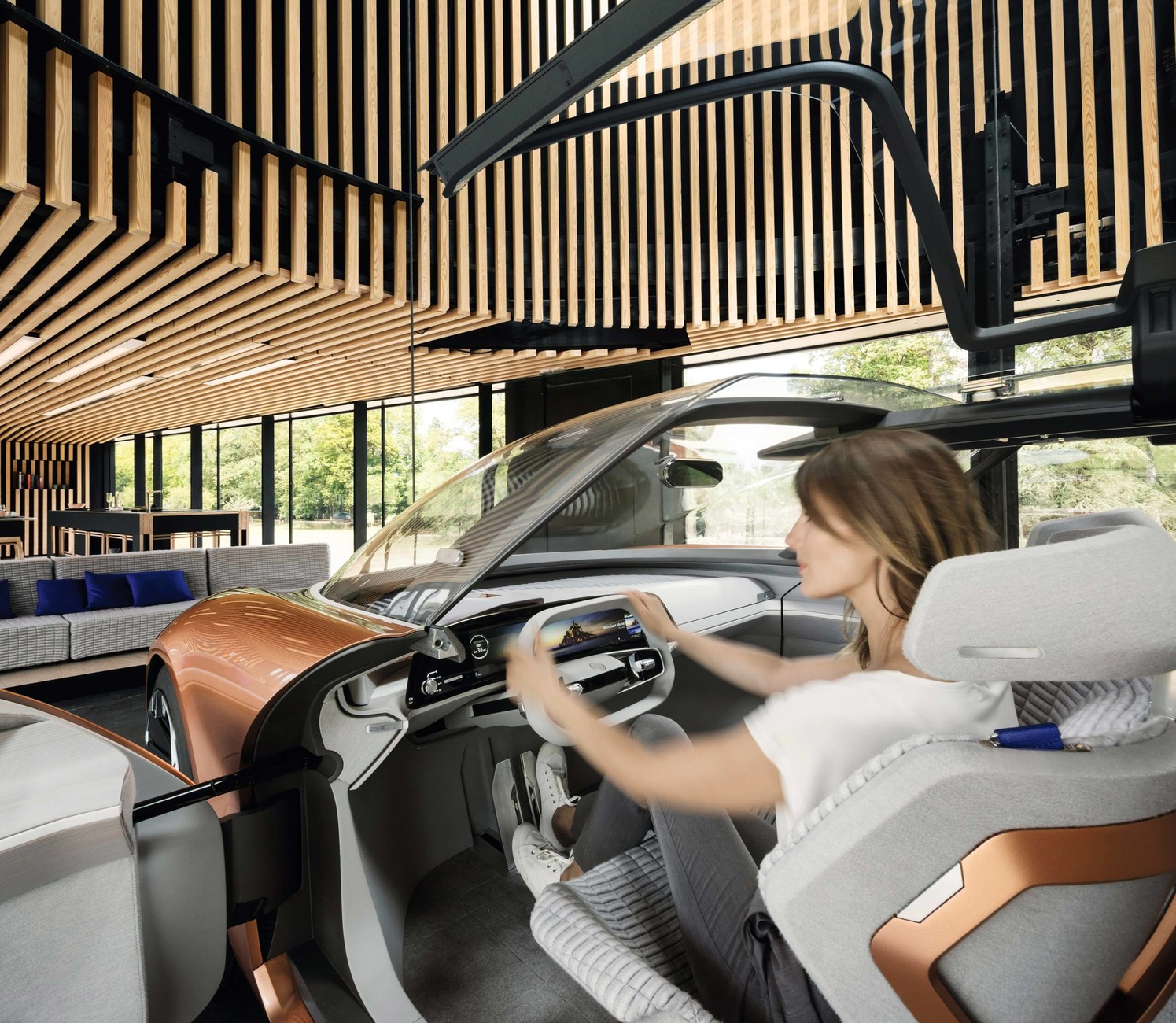 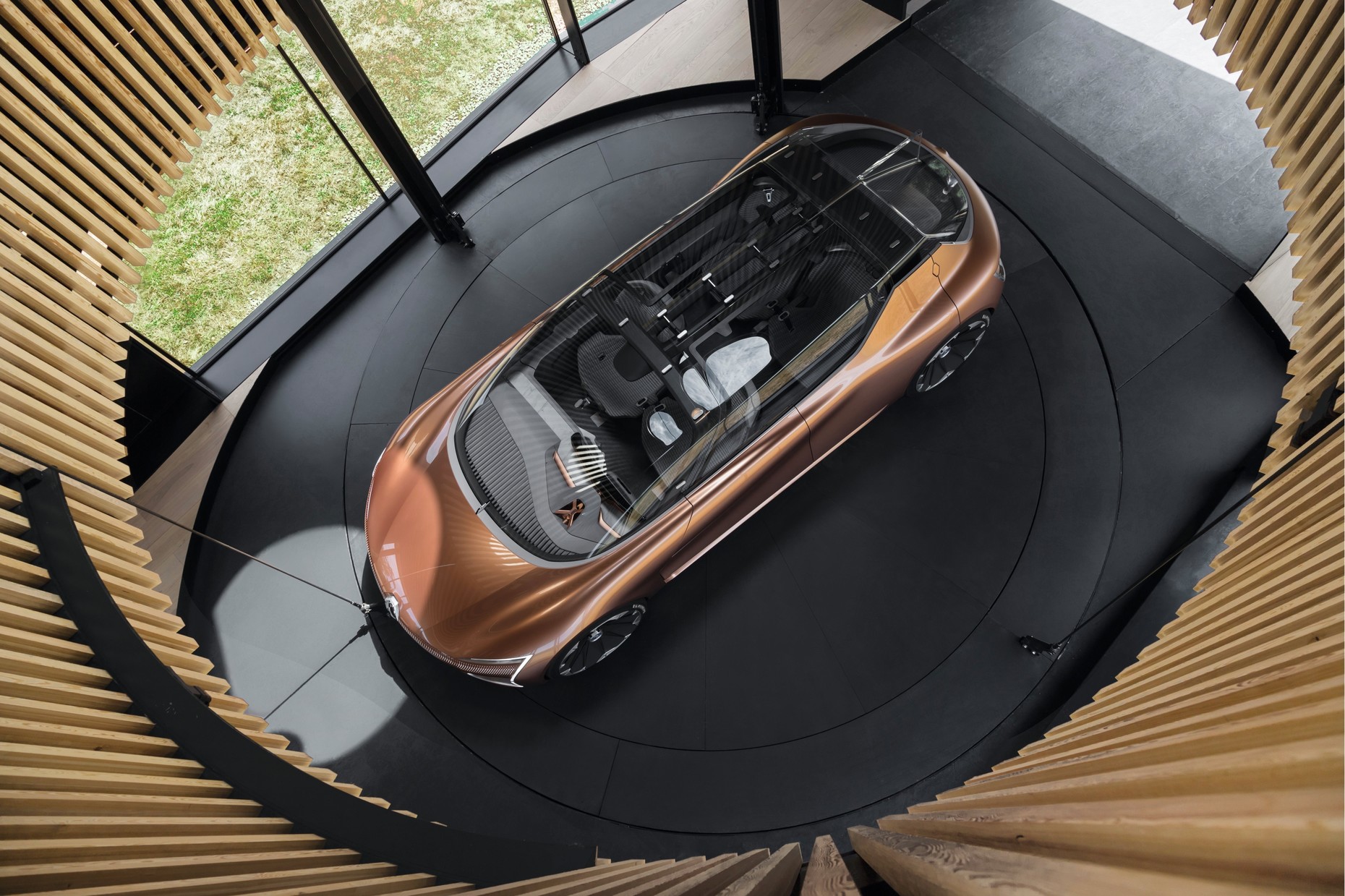 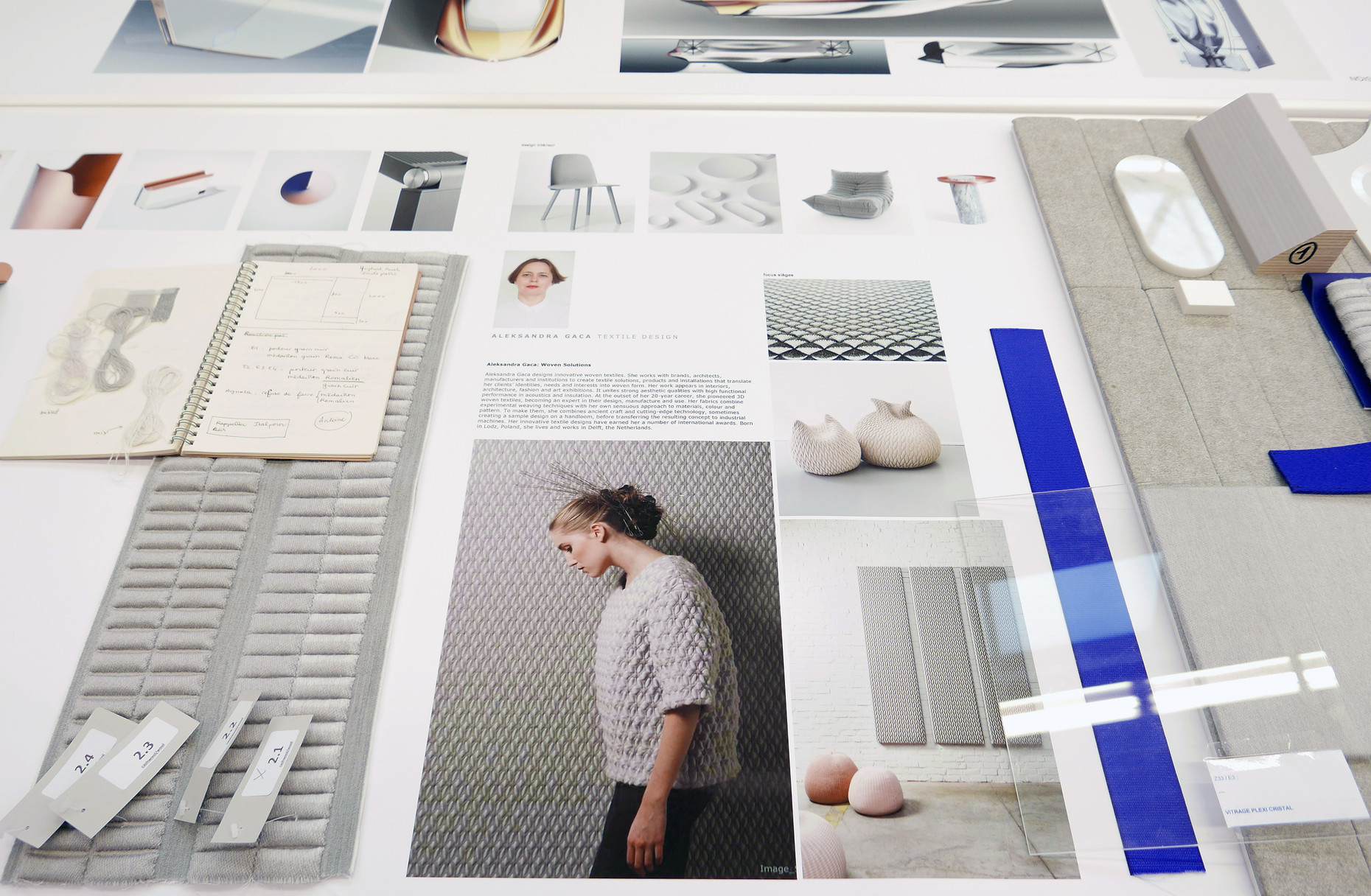 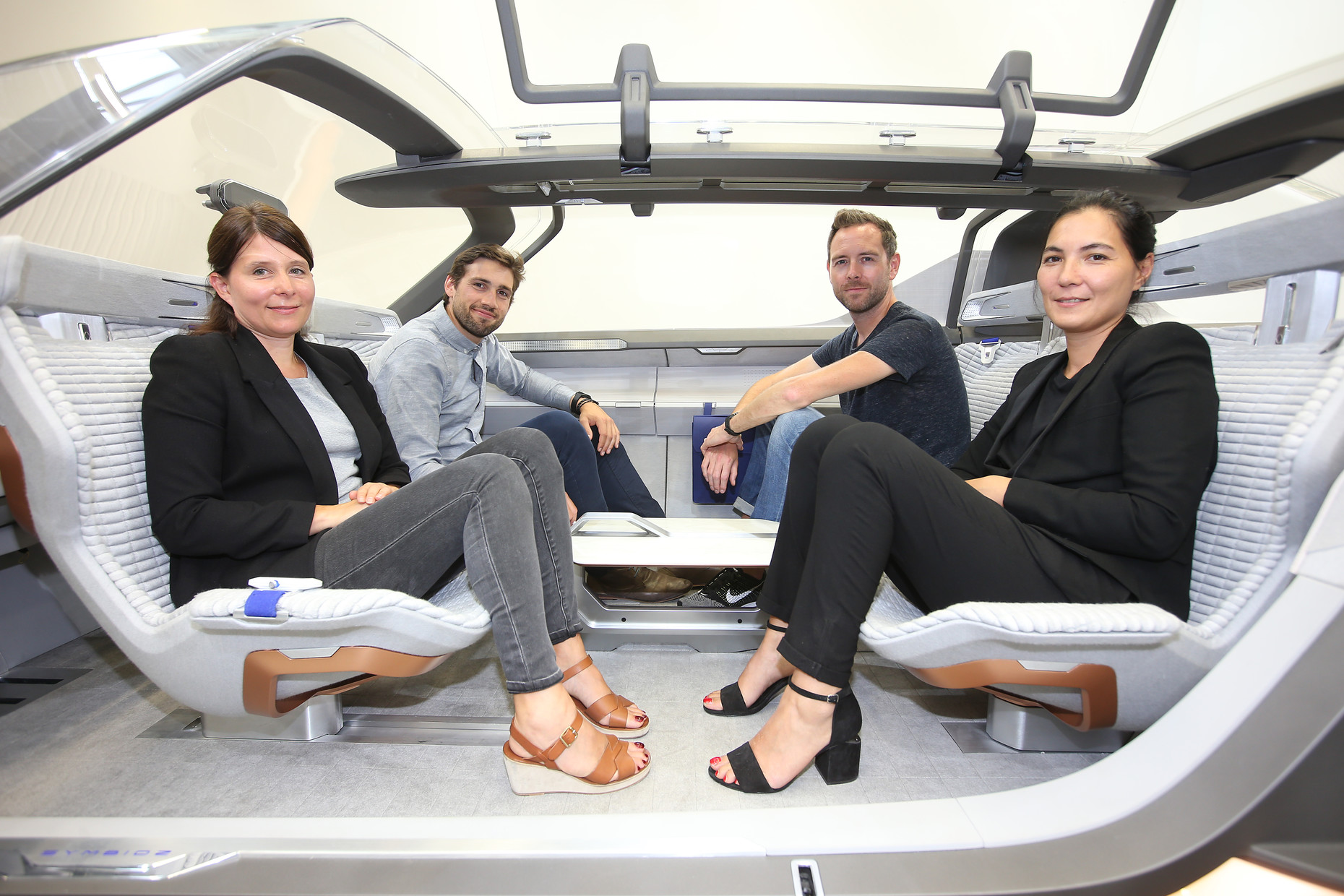 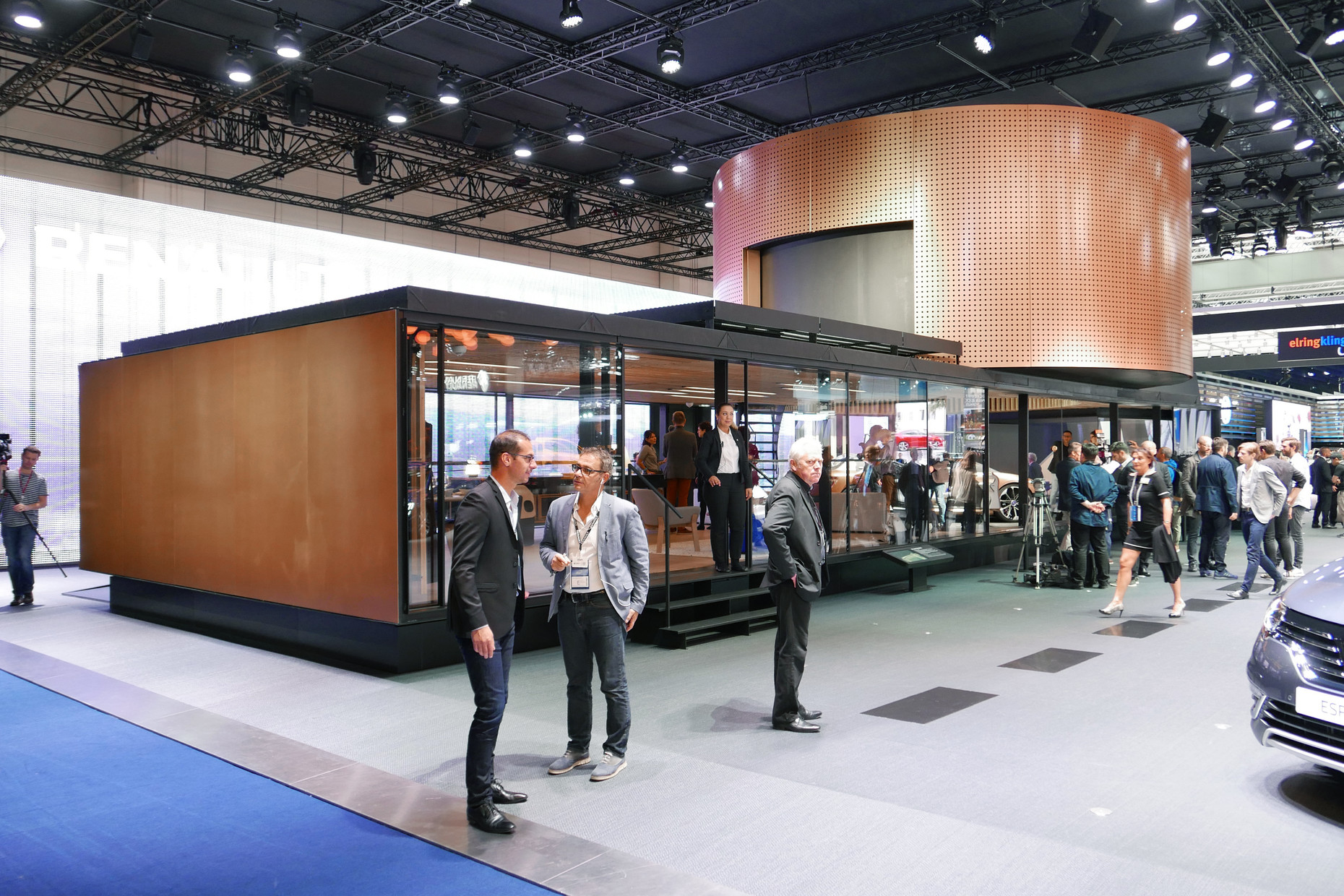 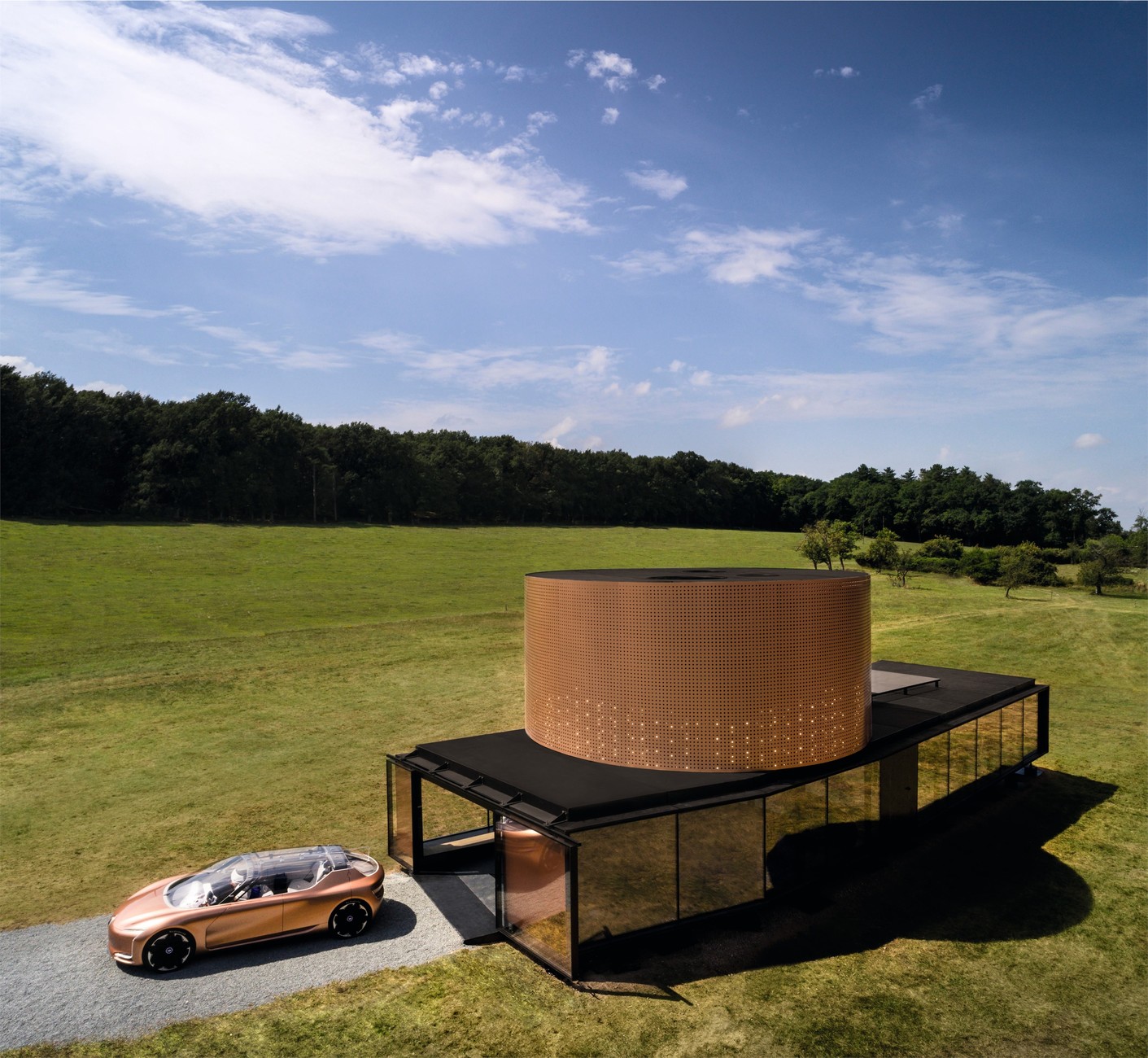 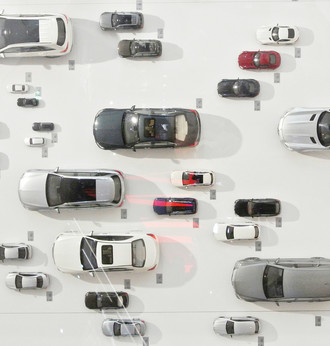 “Volk ohne Wagen” (a people without a car) is the provocative title of a polemic by mobility researcher Stephan Rammler. What solutions does he actually have to offer for future mobility? 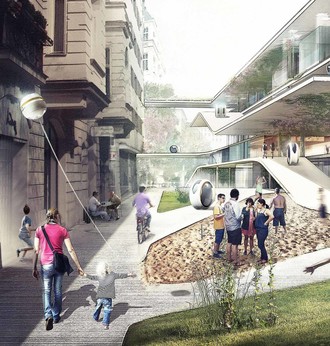 Which forms of settlement have which mobility needs?

Do we need more sweeping changes to the interplay between building and mobility? Christian Gärtner from Urban Standards about the steps needed for a new mobility policy.