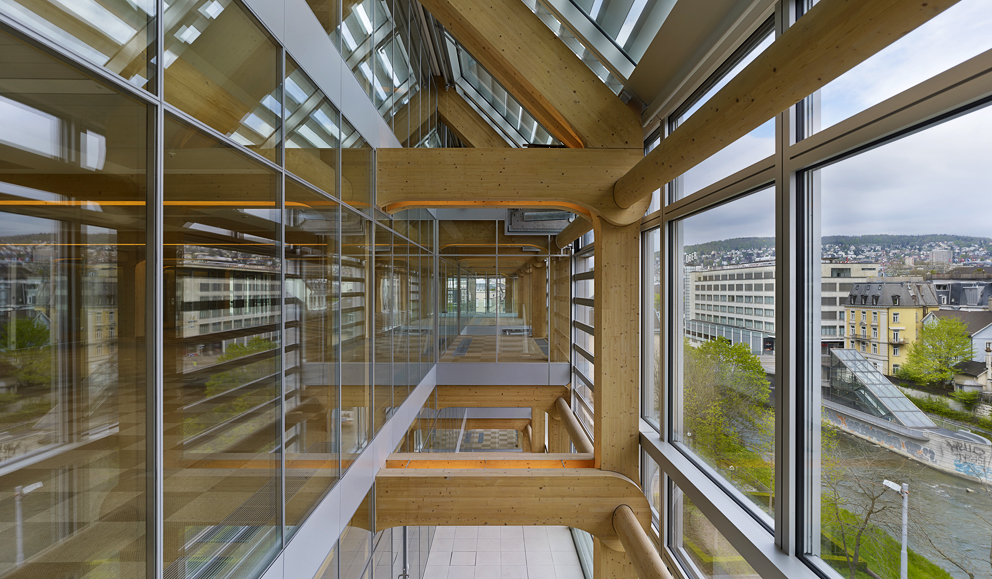 The construction site was quite spectacular. More than once in the summer of 2012 passers-by stopped in their tracks to take snapshots on their mobile phones. Rarely do you see a wooden structure on this scale arise downtown. The office The Tamedia offices, which can accommodate some 480 of the media corporation staff, replace a prior edifice and with its two-story hipped roof finishes flush with the neighboring building. What caused such a stir long before turnkey was how it is made. It consists of a solid frame made of pinewood, 21 meters high and weighing some 20 tons. It was assembled on site and heaved into place by crane. There are seven axes spaced 5.5 meters apart, creating the rhythm of the building’s longer side. Beams oval in cross section link the frames of the five stories. Without any metal connectors: Their oval beechwood core ensures the wooden connections remain firm and rigid. Striking beechwood pins link the thickened stringers to the supports.

An office building made entirely of wood and glass with no steel at all? For about ten years now, the Swiss authorities have permitted wooden buildings up to six stories high and wooden facades that run to eight stories, a fact that reflects the technological development in wooden engineering in recent decades. Today, thanks to CNC milling, the elements can be cut down to the last millimeter, sections prefabricated and then assembled on site. And fire prevention standards can be complied with as the corresponding decrees were amended in 2005 to reflect the latest research. Wood can withstand fire if it is solid. For once charred the surface protects the inside. Wood can therefore be used as a construction material if it has a fire resistance time of 60 minutes. And the building material’s ecological advantages are manifest – wooden structures are light and entail little grey energy. One cubic meter of wood has, as a tree, already absorbed a ton of carbon dioxide. If one makes it from components, the CO₂ emissions are one third lower than for metal, and compared to concrete about one half less. Moreover, wood is a renewable construction material, all goods reasons not only to use it for chalets in the mountains but also for multi-story office buildings. That fits a city well whose electorate voted in 2008 in favor of trying to achieve a 2,000-Watt society. That alone is a challenge. So all the better if construction engineers show that things can be done differently. The building also offers other benefits that can be considered exemplary of ecological architecture: Operating it produces no CO₂ and requires no nuclear power. Heating and cooling using the ground water enables as good as no fossil fuels to be used.

Shigeru Ban, who was commissioned direct by Tamedia Advisory Board Chairman Pietro Supino to design a new office building, contributes the necessary celebrity status. The architect is renowned world-wide for his ideas that use unconventional construction materials, such as cardboard and paper. He uses them for temporary structures, such as the Japanese Pavilion at the Hanover Expo 2000, for a temporary church for the victims of the Kobe earthquake, and for interim housing for the victims of Fukushima. Shigeru Ban knows the advantages of working with wood.

Ban relied on the expertise of Waldstatt-based wood engineer Hermann Blumer when realizing the Tamedia building. It was Blumer who proposed the special connections and the type of wood to us: pine from Styria in Austria, felled some 1,000-1,500 meters above sea level. Thus, people were able to watch the building grow in downtown Zurich, as the woodworkers sat on the frame and hammered in the pins. A total of 2,000 cubic meters of wood were required. And quite a show it was. Today, a double glass skin envelopes the solid wooden structure and yet ensures it is visible – the facade’s grid reflects that of the buildings in the vicinity. The interstice between outer and inner façade serves as a temperature buffer and provides space for stairs, meeting rooms and lounges, with window that open out toward the river.

There are obvious benefits to using wood. But what about formal quality? Shigeru Ban has, alongside other architects in Austria and Switzerland, proven that multi-storey office buildings can be made from wood. And the various examples show that wood need not automatically spell eco-sleek or old-fashioned builds. The choice of wood reveals two ideas. In addition to the material’s ecological benefits, Ban seeks to create work spaces that exude a warm feel. The load-bearing structure with the massive columns is visible throughout. Chairs, small tables and room dividers made of tubes of newspaper furnish the quiet zones outside the editorial rooms. Thanks to the large windows opening onto the Sihl River, the building feels light and transparent from the inside. And what makes it a role model is not least its formal sobriety. If you didn’t know what was on the inside you could easily overlook it. Which also means that the attitude behind the idea can also be transposed onto other spatial settings.

Shigeru Ban’s first building in Switzerland will not be his last. He won the architectural competition for a new HQ for the Swatch Group – with a proposal based on a wooden frame. The schedule foresees at least part of the project being completed by the latest in 2015. The unobtrusive charm of Shigeru Ban’s temporary edifices was also to be noted this summer with a pavilion erected for the Zurich festival: Next to Villa Wesendonck in one of the city’s nicest parks he built a pavilion using cardboard pillars to bear the load, and a weight-saving carbon structure. The structure also made sense as it was easy to take apart and reassemble, enabling the museum to re-use it at a later point in time.

Top notch for living: The new Hermès furniture collection was presented at Pelota hall in a house installation by Shigeru Ban
(19 April 2011)

The return of the curved: Be it purses, chairs or roofs, wickerwork is experiencing a revival
(10 August 2010) 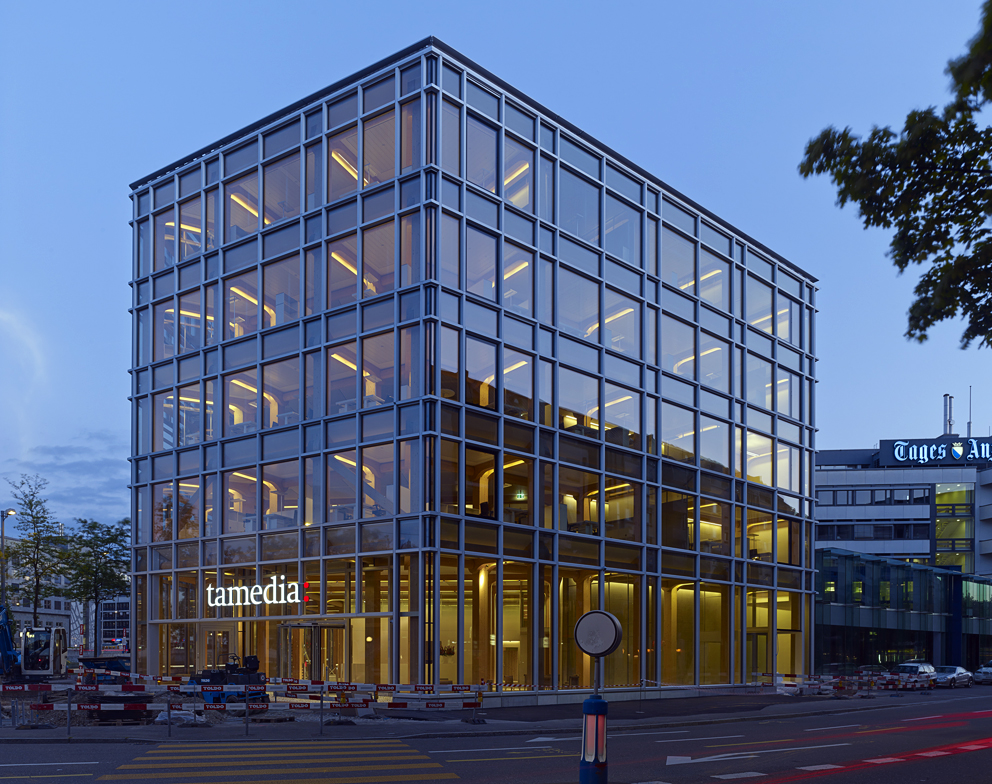 Clear understatement: If you didn’t know what was on the inside you could easily overlook it. Photo © Didier Boy de La Tour 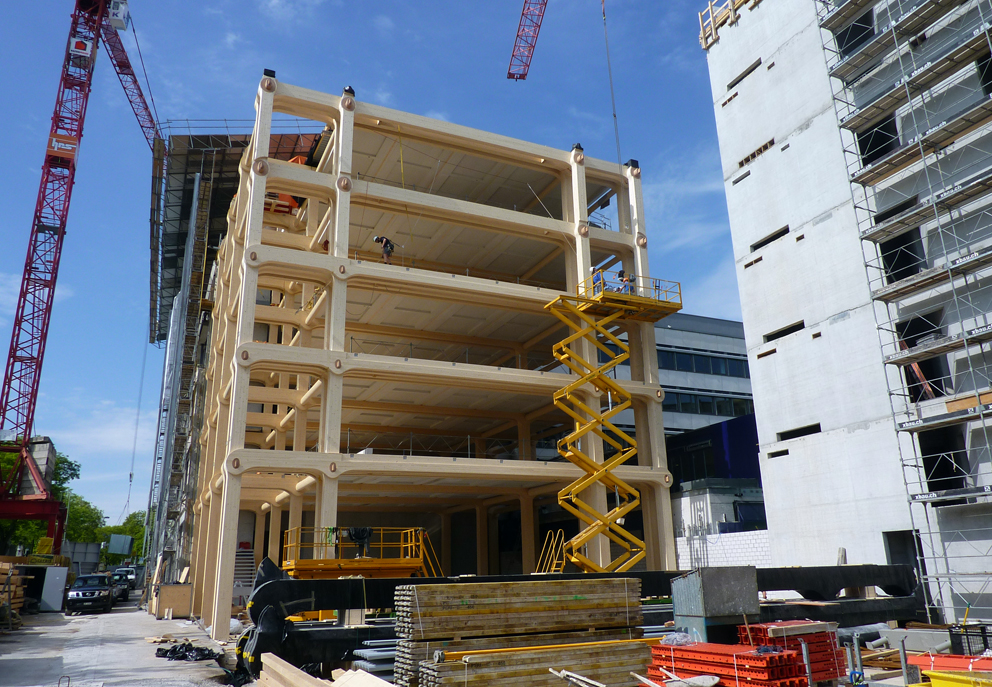 From april 2012 on the workers were hammering and beating to rise up the wooden carcass into a high of 21 meter. Photo © Blumer-Lehmann AG 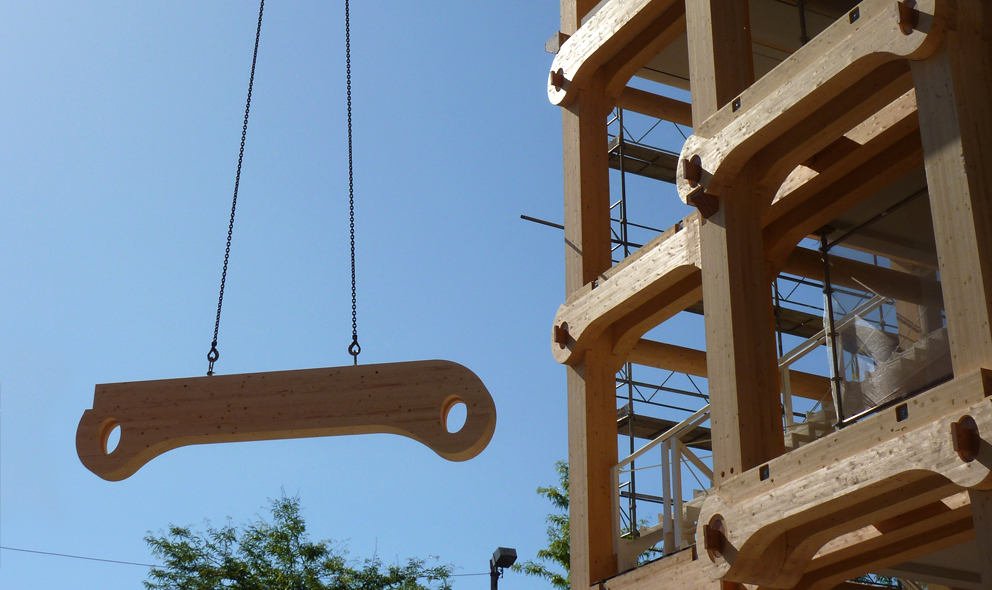 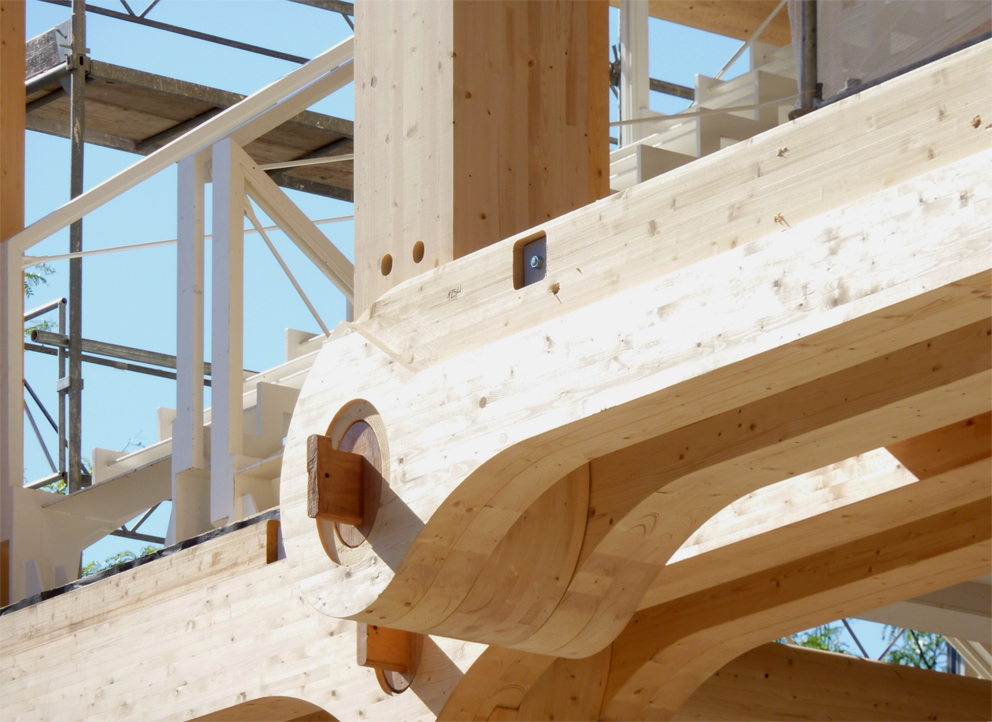 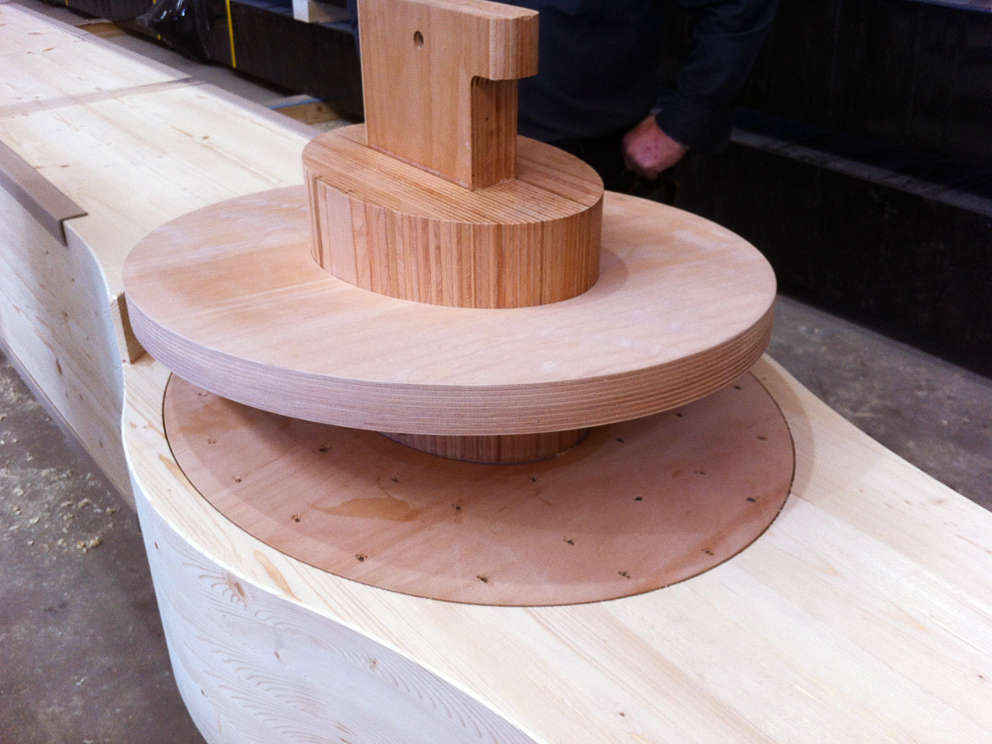 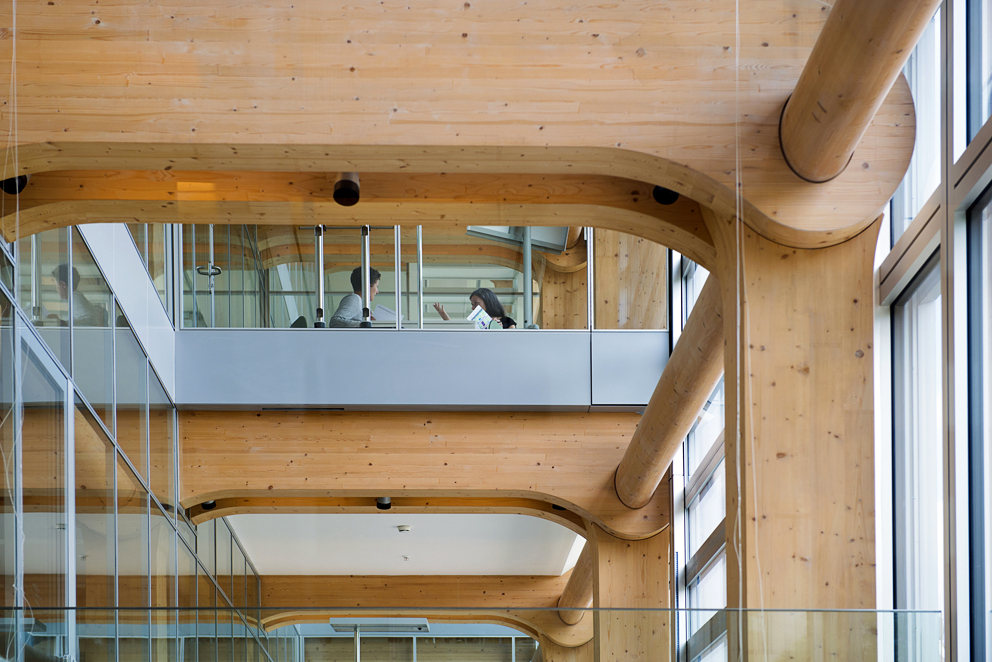 Exemplary, not only for its wooden construction: Operating it produces no CO₂ and requires no nuclear power. Photo © Reto Oeschger 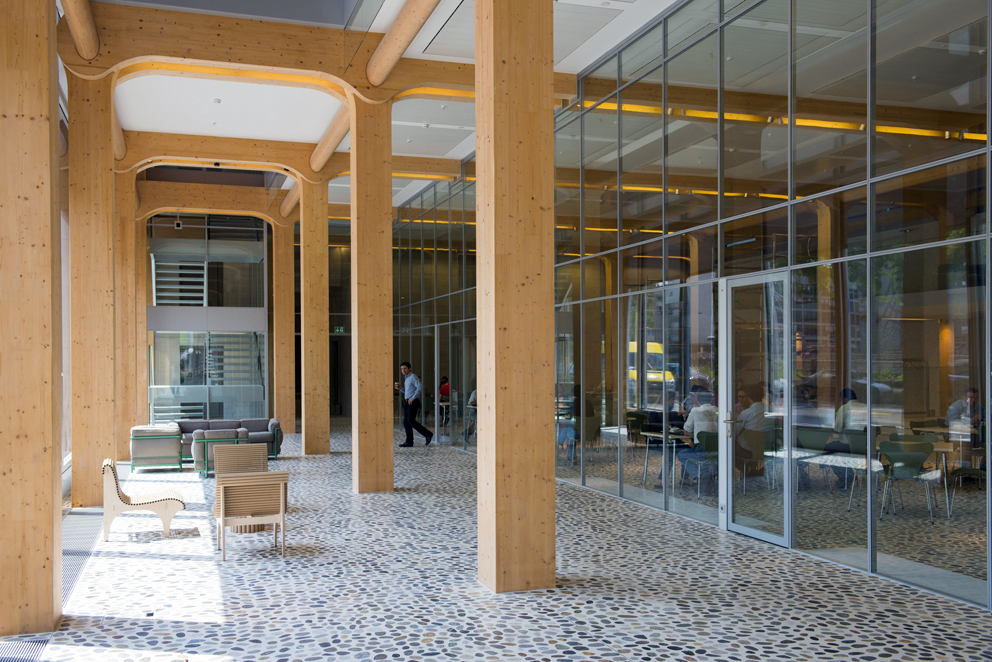 The interstice between outer and inner façade serves as a temperature buffer and provides space for stairs, meeting rooms and lounges. Photo © Reto Oeschger 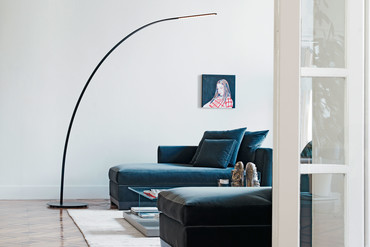 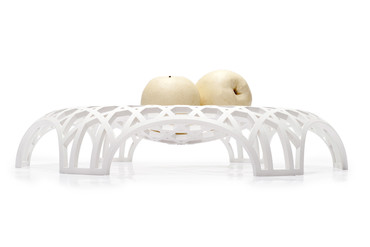 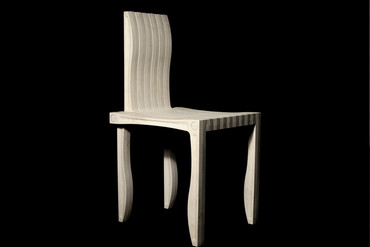 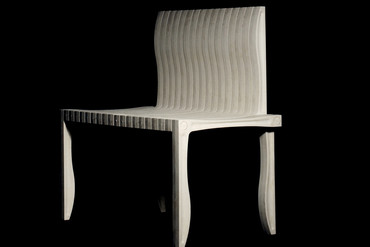 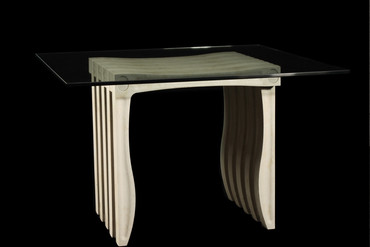