FEATURED PROJECT
A plaza not a silo

Freed from the old constraints! At its WorkLife Center in Madrid, Steelcase breaks down structures and dividing walls.
7/2/2019

If you stop moving forward you get left behind. And no company today can afford to stand still. This makes it all the more important both to exploit the creativity and potential of all employees to the full and put them to use, an idea people greatly appreciate in the Madrid outlet of office furniture manufacturer Steelcase. And to achieve this goal there has been a radical makeover to the workspace in Steelcase Madrid WorkLife Center – with the intention being to spark a corporate culture that promotes collaboration and the exchange of ideas as well as creative work and fast responses.

Previously the Steelcase office in Madrid had a rather classical structure with the various departments being assigned their own office space. Typically, tasks were dealt with inside the group and other departments tended to be brought in only to handle individual tasks. There was a danger of a silo mentality developing – whereby the various units do not get a regular insight into other areas of activity and consequently lack a sense of the bigger picture. And where there was cross departmental collaboration this was not normally evident in the workspace itself. In addition, often the equipment required for collaboration in ad-hoc teams was simply not available while stationary computers and landline phones tended to confine staff to their own individual workspace.

The planning and implementation work for the new workspace was also used as a trial run for the new work methodology. A multidisciplinary in-house team was formed that not only included the company’s own designers and architects but also executives from all departments. Subsequently, this team organized workshops with the other employees to identify areas of friction that crop up with collaboration. Noise was one issue that was tackled by a working group. At a later stage of the planning the project team appointed “ambassadors”, who were responsible for mediating between the team and the rest of the workforce. But before any construction work began there was a clean out on a large scale as in future Steelcase Madrid WorkLife Center is to become a paperless office. Everything that does not necessarily need to be kept was thrown out and an incredible 15 tons of paper landed up in the shredder.

The design concept for the new office areas was developed by the Steelcase design team headed by Patricia Koszyl and was based on the work of the project team; the idea being to focus on individual employees. The design is inspired by the layout of a typical Spanish city with a central plaza, a city Centre, various neighborhoods, paths and intersections. A special feature of the new design is the so-called “Leadership Space”. To make it easier for employees and colleagues to approach the individual offices executives previously had were scrapped in favor of a joint working area they can all use (when they are not part of an interdepartmental team).

Meanwhile there is general agreement amongst employees that both the new structure but also the new architecture have proven a huge success. Staff satisfaction has risen and collaboration has improved noticeably. Or to quote Project Manager and Human Resources Director David Martin: "You need only walk through the door to experience the new corporate culture for which we have worked so hard." (fap) 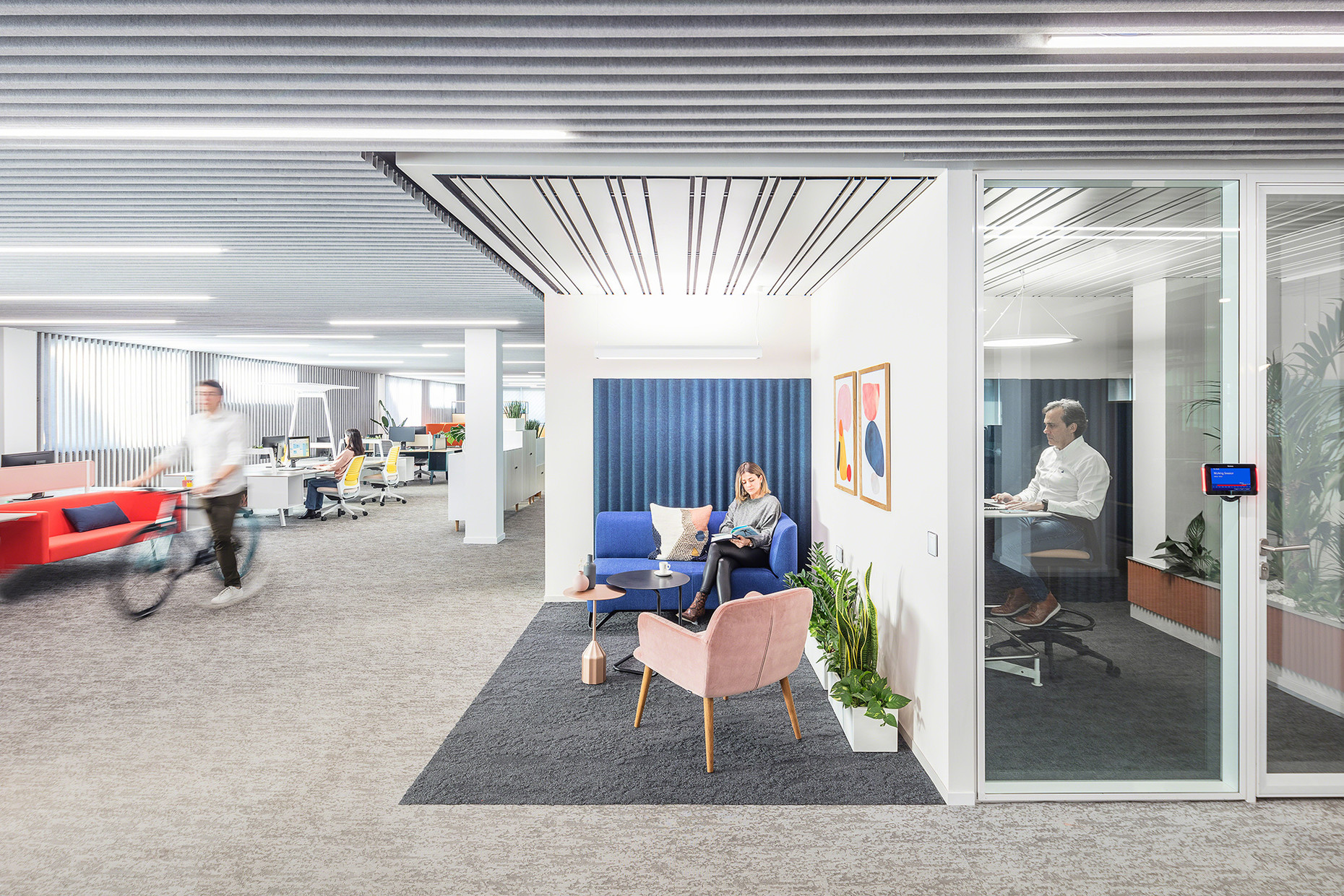 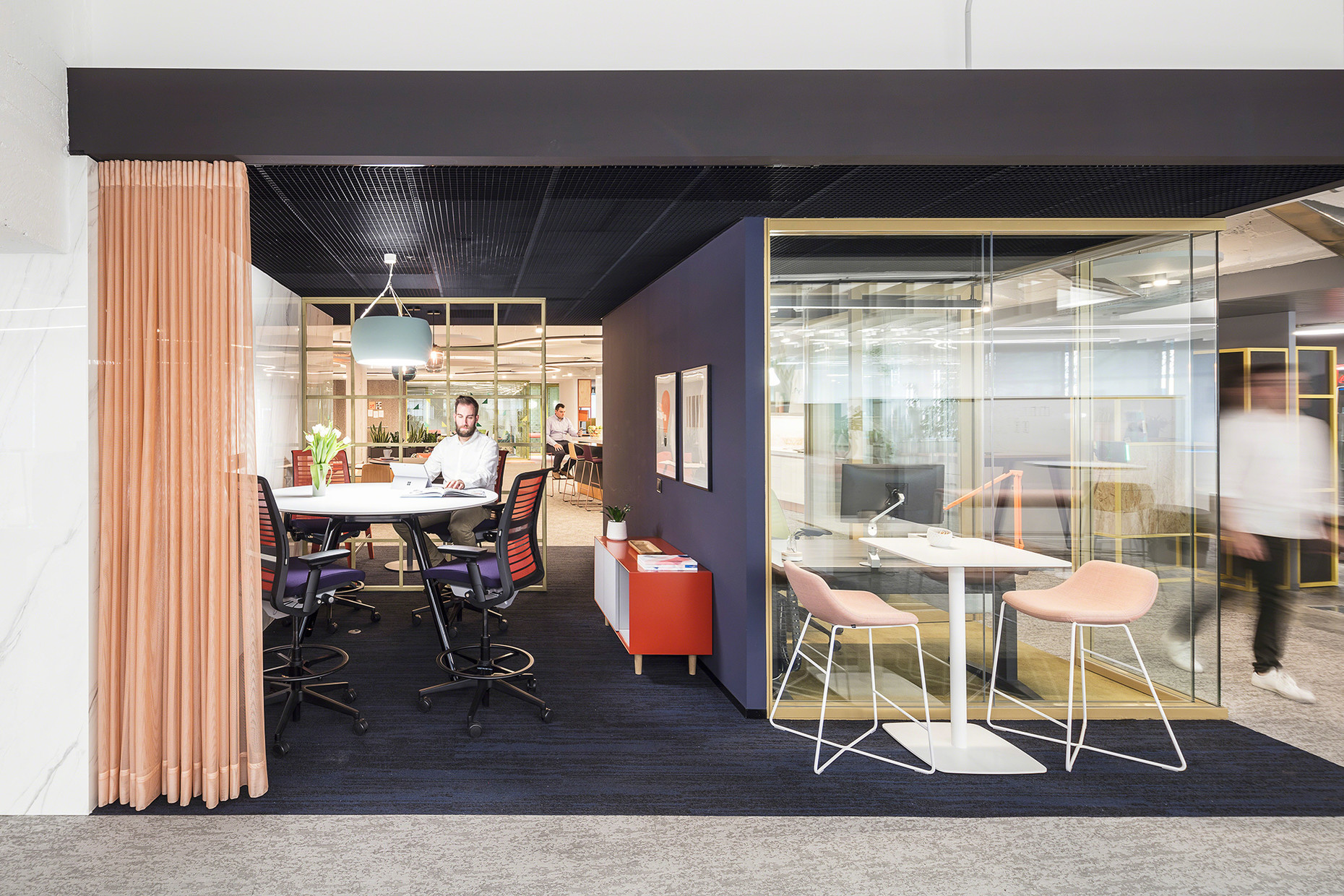 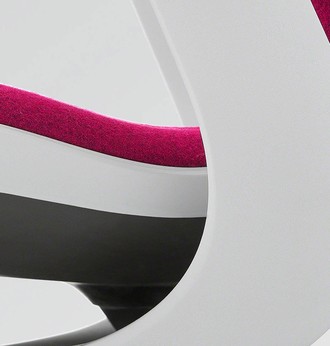 Steelcase has developed an affordable material that offers all of the advantages of carbon. The result is a robust office chair that reacts flexibly to its user’s movements. 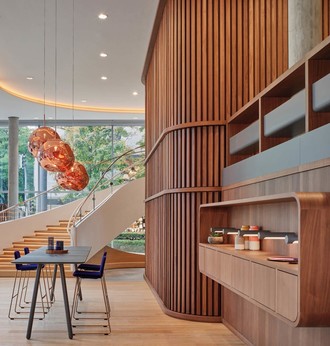 The future of work

In the Learning and Innovation Center in Munich Steelcase has developed working environments aimed at increasing employee productivity. 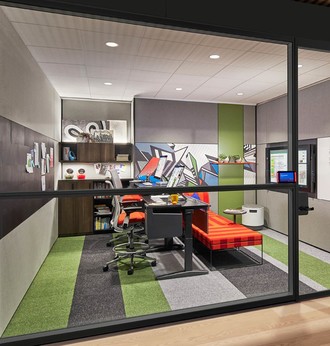 The right place for everyone

Steelcase and Microsoft have developed five “Creative Spaces” that combine space and technology to enable the users to work more creatively.
Advertisement