From Berlin out into the world

Berlin-based Designstudio 7.5 has developed the “Cosm” office chair for US office specialists Herman Miller – and the newcomer is fast becoming a world hit. It would not be the first once for Carola Zwick, Roland Zwick and Burkhard Schmitz. An interview
Text by Fabian Peters, Photos by Alexander Kilian | 12/12/2019

Fabian Peters: Over the last two decades you have designed four highly successful office chair models for Herman Miller. How did the collaboration come about?

Carola Zwick: It all started with a phone call. It was in the period just after the Wall came down and we had finally managed to get a phoneline for our office. That was a real challenge back then. And when I heard who was ringing, I initially thought it must be a prank.

Burkhard Schmitz: Herman Miller invited us to take part in a European competition for a desk-screen system, meaning a vanity screen. We were, to put it mildly, surprised, as we admired Herman Miller for the fact that they didn’t develop individual items of furniture, but systems, such as the legendary “Action Office”. We eventually decided to submit a system, and a big fat book to accompany it, in which we tried to explain the cultural and architectural differences between the USA and Europe. And why the “Action Office” was not a success in Europe.

And you promptly won the competition?

Burkhard Schmitz: We of course didn’t get the job. But we did attract their attention. And at some point, Herman Miller then wanted to work with us, on a chair project, which culminated in “Mirra 1”. Our task at the time was pretty much a Mission Impossible. For the chair was meant to be able to do just about as much as the extremely successful “Aeron” chair but be 20 percent cheaper.

Carola Zwick: At the beginning of the collaboration there was quite a cultural clash. We presented a seating cushion to the project managers – we wanted to use it to simulate the kind of sitting experience we had in mind. They, however, had expected a presentation with a scale model or at least a rendering of what we thought the future chair would look like.

Evidently, both sides somehow found a way to move things forward after all?

Burkhard Schmitz: In the final instance, the project was a huge success. Over one and a half million “Mirra 1” units have since been sold. And we were suddenly the first non-American designers to have come up with a commercially successful office chair for Herman Miller. However, we then swore to ourselves never to go about something that way again. Because the estimated two years’ development period had turned into five.

Roland Zwick: When developing a product, we repeatedly undertake so-called explorations. They allow you to go off in different directions, and if you land up in a dead-end you simply turn around. Herman Miller is a kind of supertanker that attempted to follow us when we developed “Mirra 1”. That invariably got nowhere. Fortunately, at some point Bill Stumpf, who designed the “Aeron”, sat down on one of our prototypes, rolled back and forth, and said: “That’s like driving your Jaguar out of the carport.” That accolade probably saved us at that point from being thrown out.

Did you do things differently when it came to developing “Setu”?

Carola Zwick: Completely differently. We first presented the chair to the team at Herman Miller once we had completed the exploration phase and it already more or less looked and felt the way we imagined the final mass product would.

So there was no real briefing for “Setu”?

Burkhard Schmitz: None whatsoever! We had noticed back then that there was a great need for something that we called “instant comfort”: There are so many places where you work but do not have your own chair, such as conference rooms. Nevertheless, the chairs there are often not destined to be used as work chairs. We wanted to offer a solution. And we were, moreover, convinced that it should be possible to deliver comfort using less material inputs. For that reason, we then developed something that MIT later termed a “compliant mechanism”.

Burkhard Schmitz: They are elements that are made of one piece but are nonetheless flexible. They have a geometry that enables the chair to follow the sitter’s movements. These elements are made of a type of polypropylene that has a little rubber added to it. Such a technology also spells a chair that requires far fewer parts and weighs a lot less: “Setu” can bear a load of 150kg, but itself only weighs nine kilos.

That also plays a major role as regards eco-friendliness.

Burkhard Schmitz: From the very outset, sustainability was an important topic for us. For example, “Mirra 1” was the very first complex product to receive “cradle-to-cradle” certification. For quite some time, Herman Miller regarded the product weight as relatively unimportant. We have since then managed to persuade the company to see things differently. Because if there are 1.5 million units of a chair, even saving 20 grams when it comes to the star base make a huge difference.

How did the relationship with Herman Miller continue after “Setu”?

Burkhard Schmitz: In actual fact, we were just really glad to have got “Mirra 1” over the finishing line. However, in retrospect we were not completely happy with the result. And ten years later we decided to contact Herman Miller and ask whether we could develop “Mirra” all over again.

And what was the response?

Burkhard Schmitz: It was muted. They asked us whether we would not prefer to do something completely new. At some point I then said to Brian Walker, who was CEO at the time: “Brian, why do you drive a BMW? Because you know what the next BMW will look like, Namely like a BMW.” Which is when he realized that what we wanted was to demonstrate confidence in an existing product.

Carola Zwick: When developing “Mirra 2” we managed to reduce the chair by the complete weight of “Setu”, i.e., by nine kilos. Almost all the parts that were steel in “Mirra 1” are made of plastic or aluminum for “Mirra 2”. In the final instance, “Mirra 2” is the far better embodiment of our original idea than its predecessor.

For “Cosm”, your latest chair for Herman Miller, you then advanced the ideas you had already played with for “Setu” and “Mirra”.

Carola Zwick: Burkhard always says: “Revolution is overrated.” Revolution always sounds sexy, of course, but evolution is a much more powerful concept. Roland actually made the first prototype for “Cosm” almost entirely from parts of “Setu Lounge” and “Mirra 2”. And when we then sat down on it we soon realized: “Damn. We’ll have a big problem if the competition brings something like this to market.”

Burkhard Schmitz: Like “Setu”, “Cosm” has an end-to-end membrane seating surface and, like “Mirra 2”, a central bracket that stabilizes the backrest. What’s really special, though, is that “Cosm” sets itself without any outside intervention.

Burkhard Schmitz: Exactly. However, “Setu” only has a seesaw joint. The joint in “Cosm” is far more complex. We call it an “ankle tilt” movement. This usually always requires that you set the chair manually. But “Cosm” lets you tilt automatically simply when you sit down on it, adjusting itself accordingly.

How does that work?

Roland Zwick: It took a total of 18 years until the mechanism was ready for market. Originally, we had such a technology in mind for the first “Mirra” chair. Back then, I assembled the first prototype from tubular aluminum from a milking machine and springs from my Vespa – a pretty wild structure but it actually functioned. The mechanism was not possible for the price we had been set. So we didn’t evolve the idea any further back then.

Burkhard Schmitz: Over the last five years we advanced the system quite considerably to make certain it passed all the requisite tests and the mechanism is as good as idiot-proof. And not least we and Herman Miller had to devise the production methods.

What sitting feeling is “Cosm” meant to offer?

Carola Zwick: In Germany the proverb would have it that comfort is half-way to wantonness. After all, the chair is destined for work, not for sleeping in. We learned in the States that such a mindset need not be right. And have today realized that comfort need not be some frivolous joy but is the most important characteristic of a good office chair. 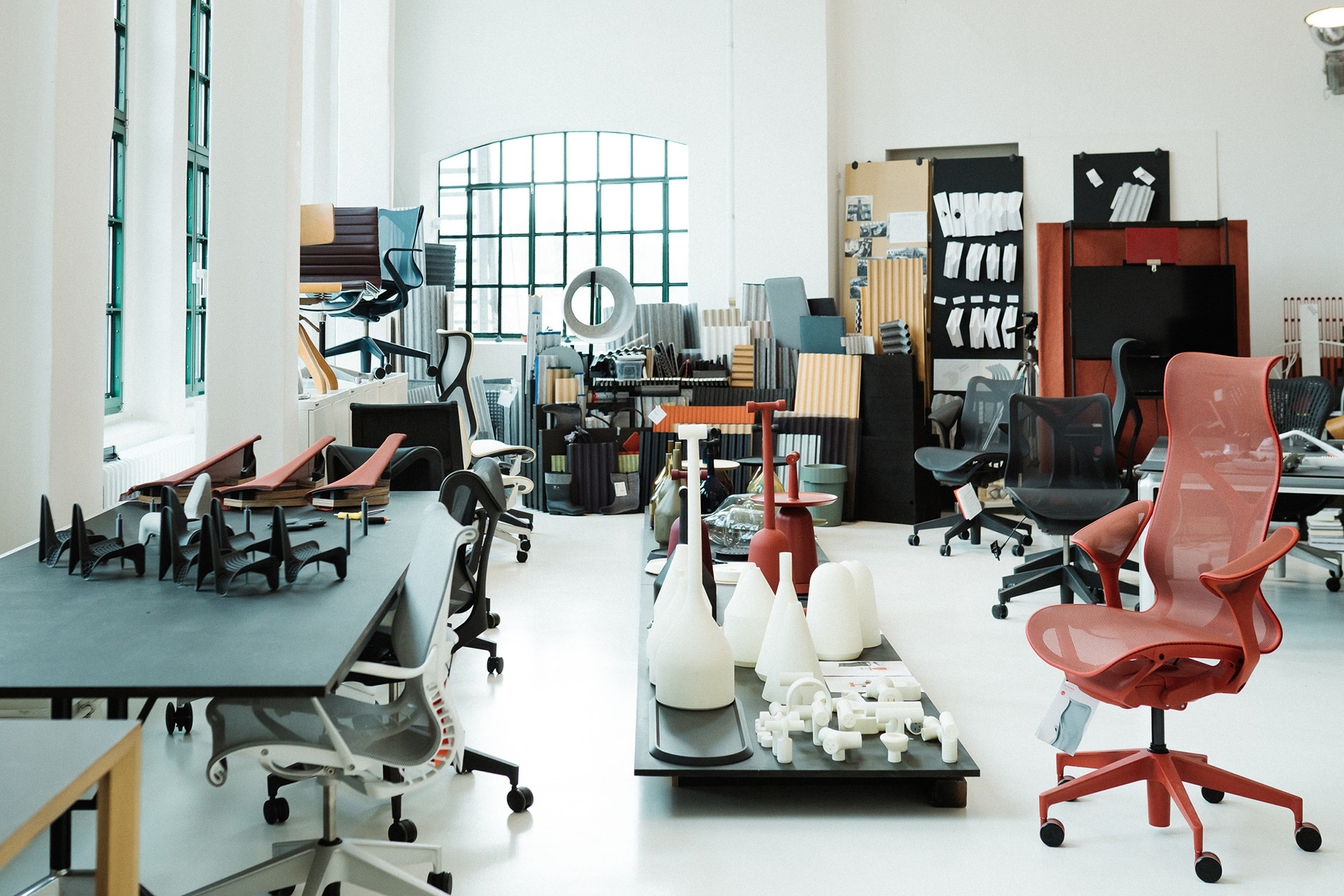 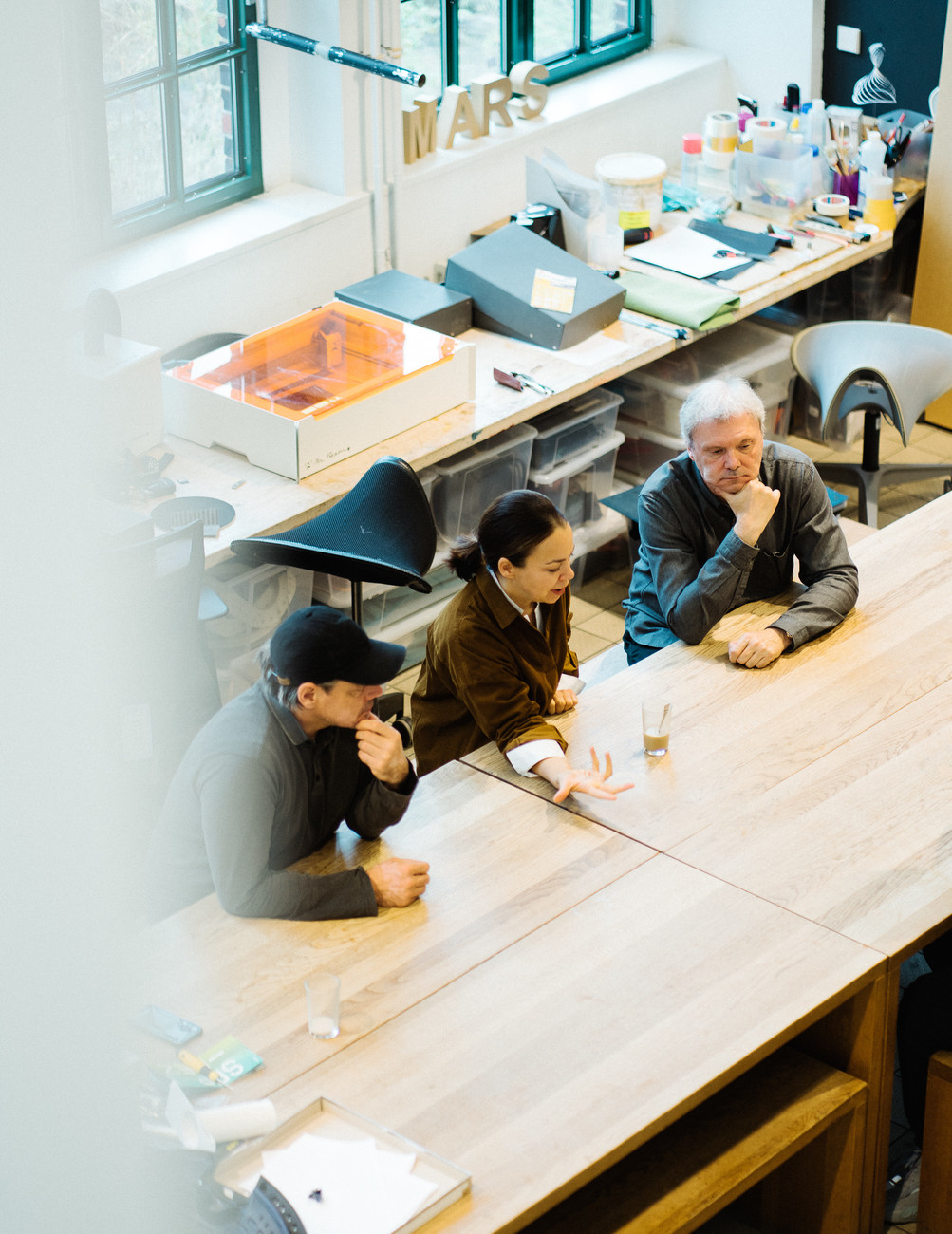 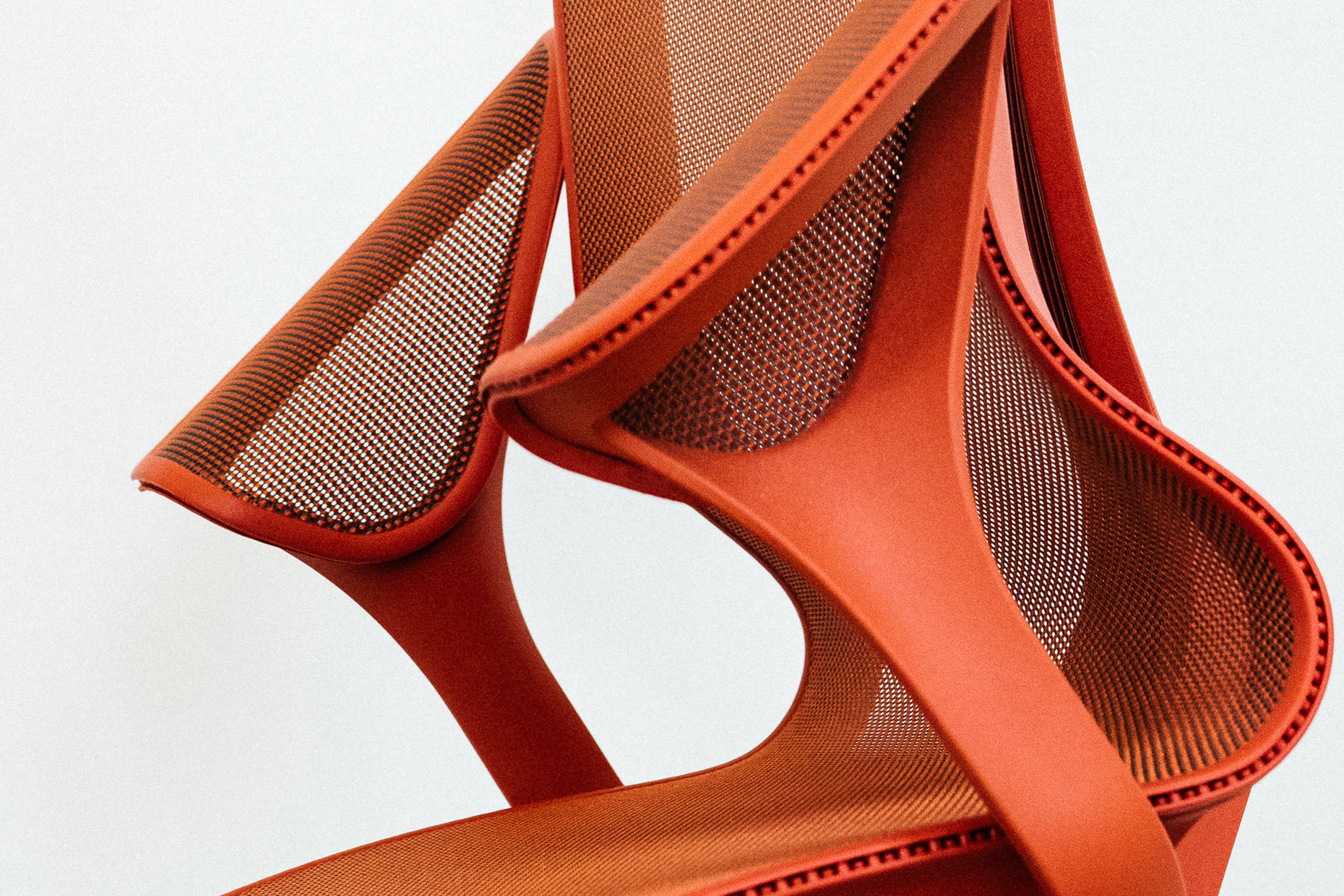 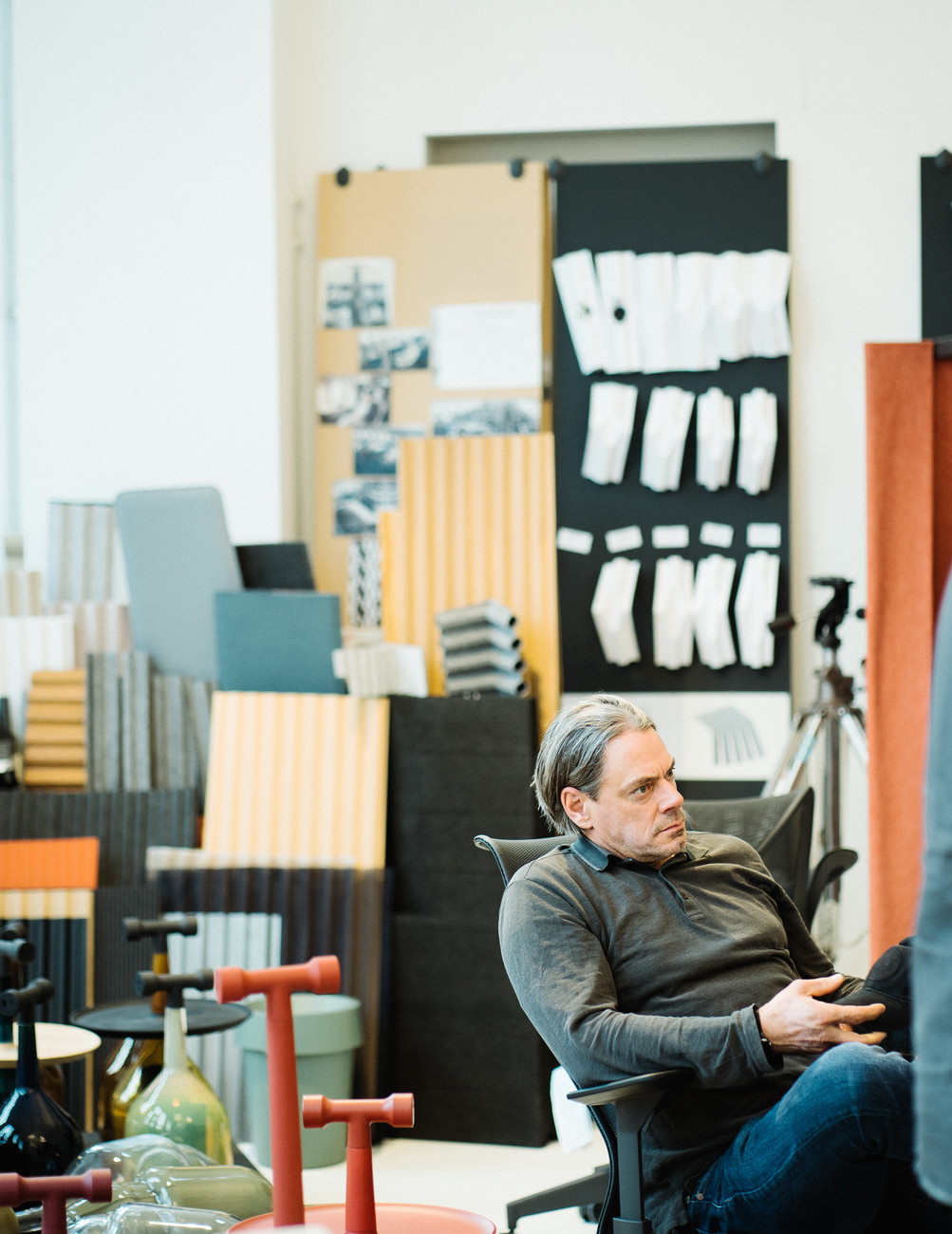 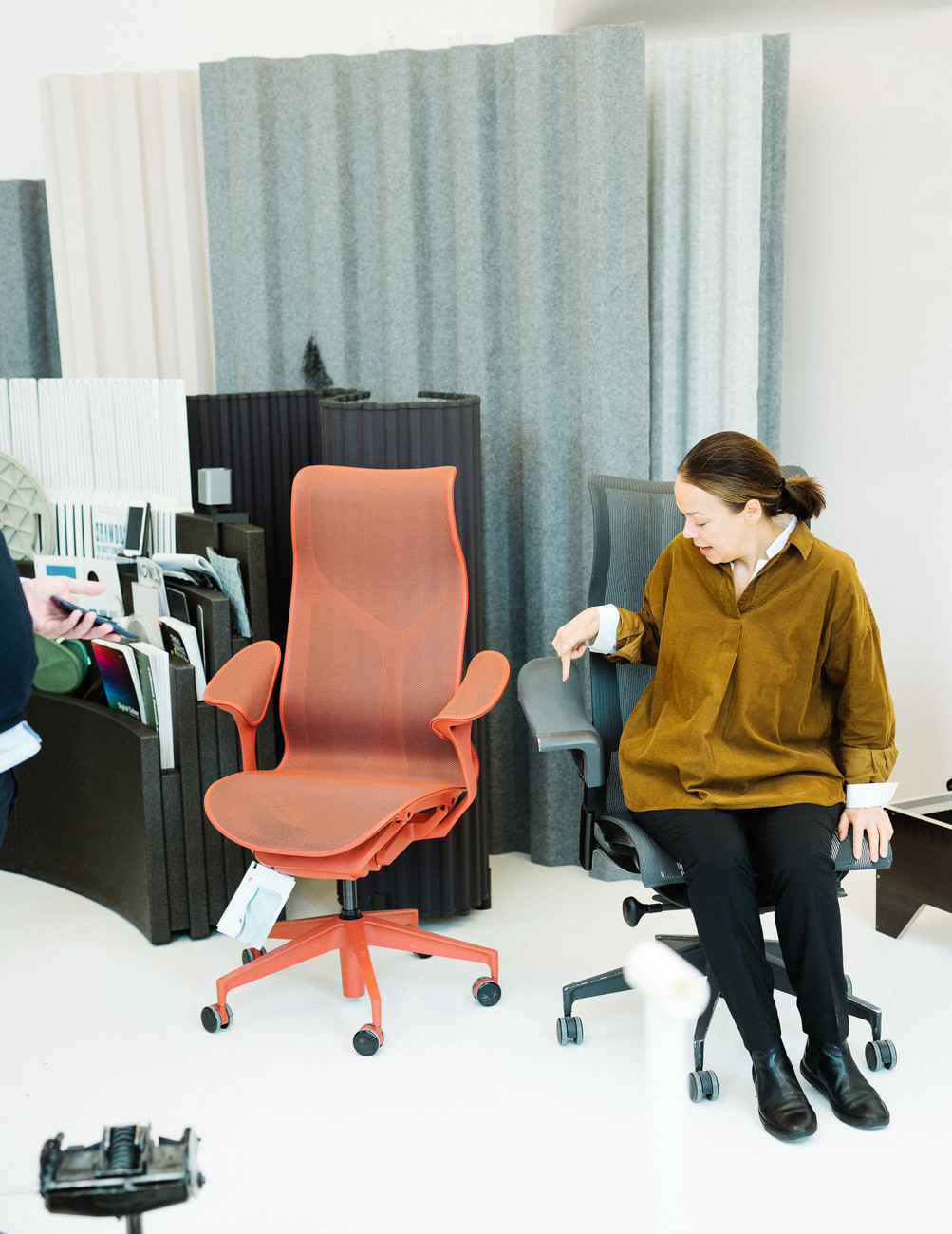 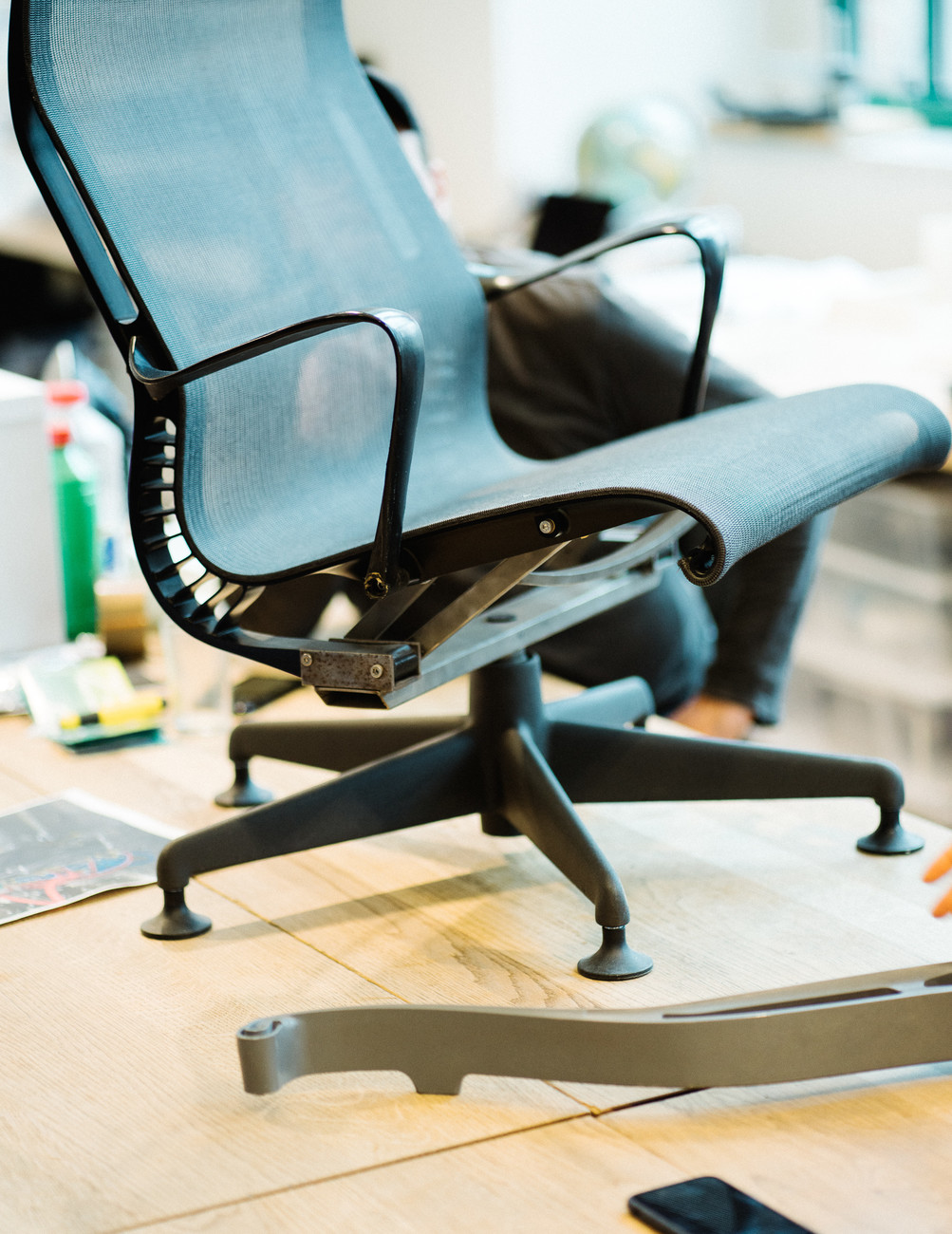 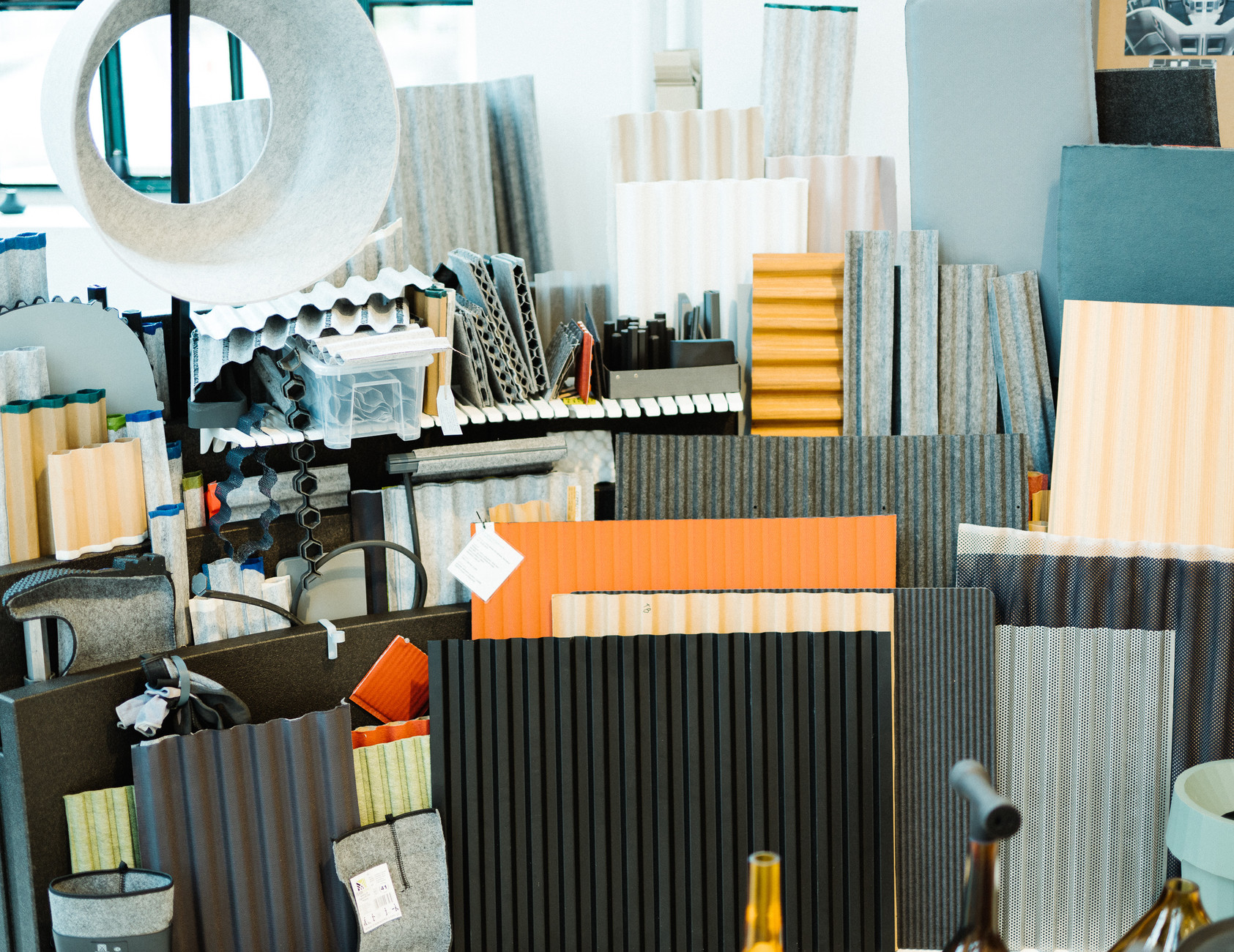 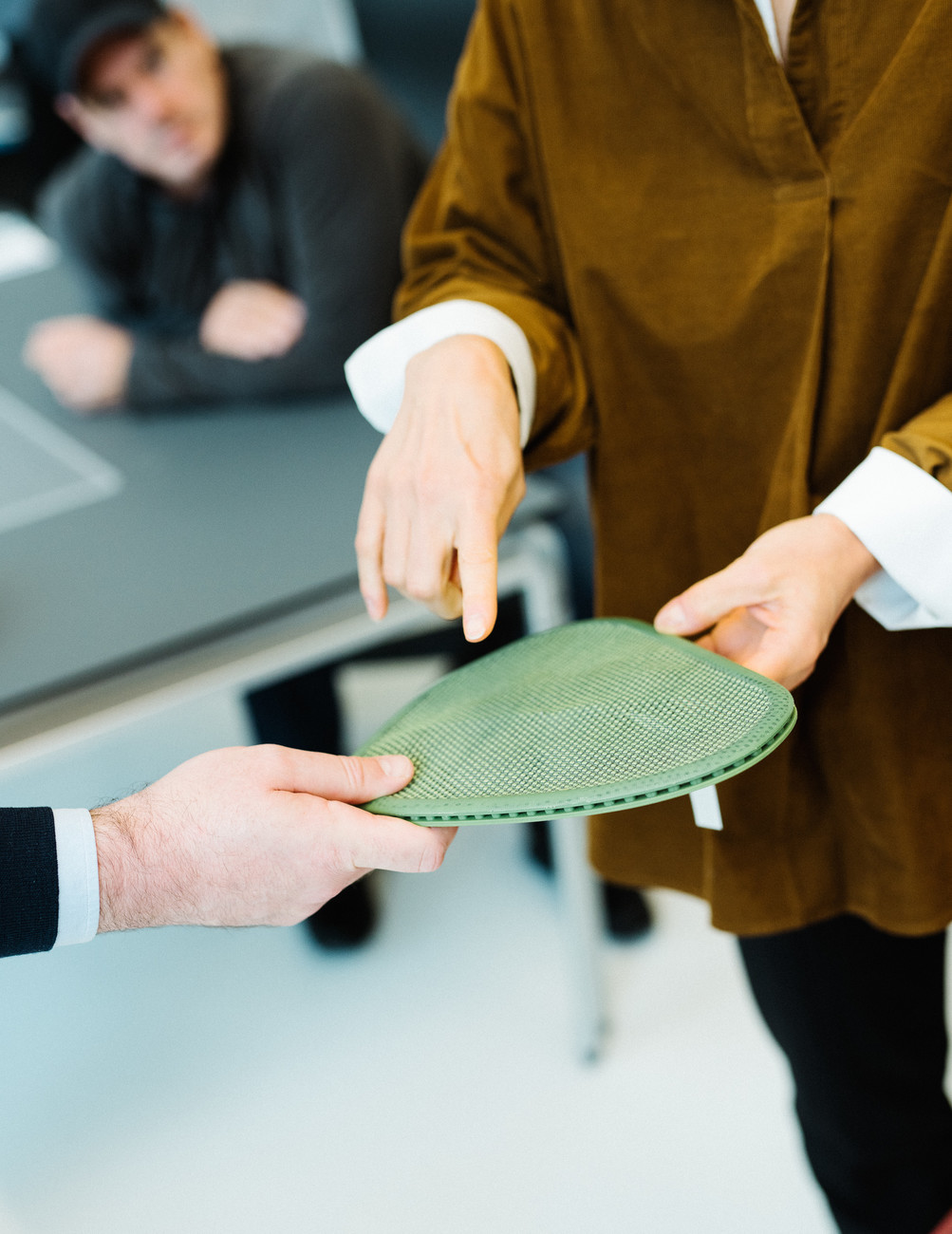 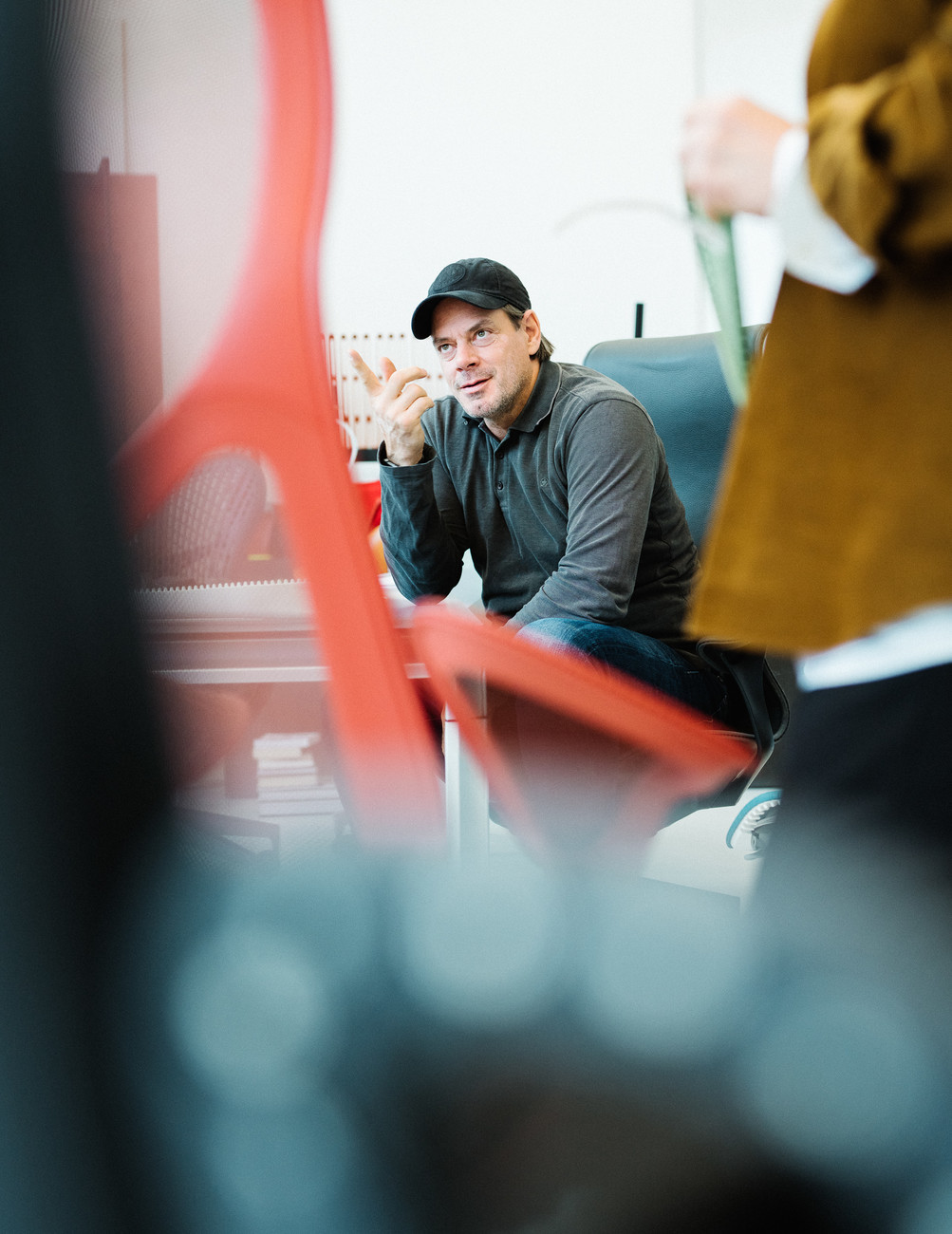 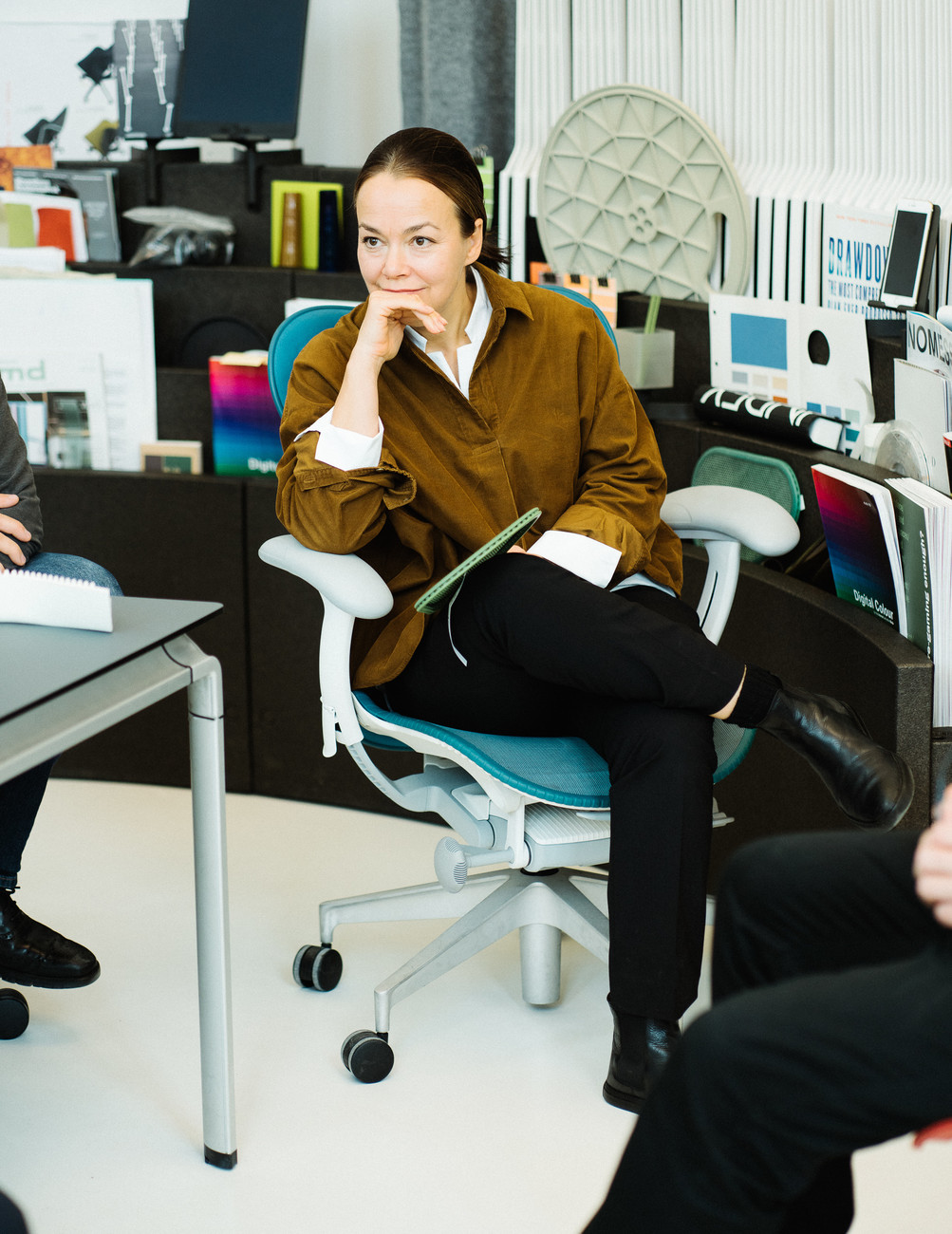 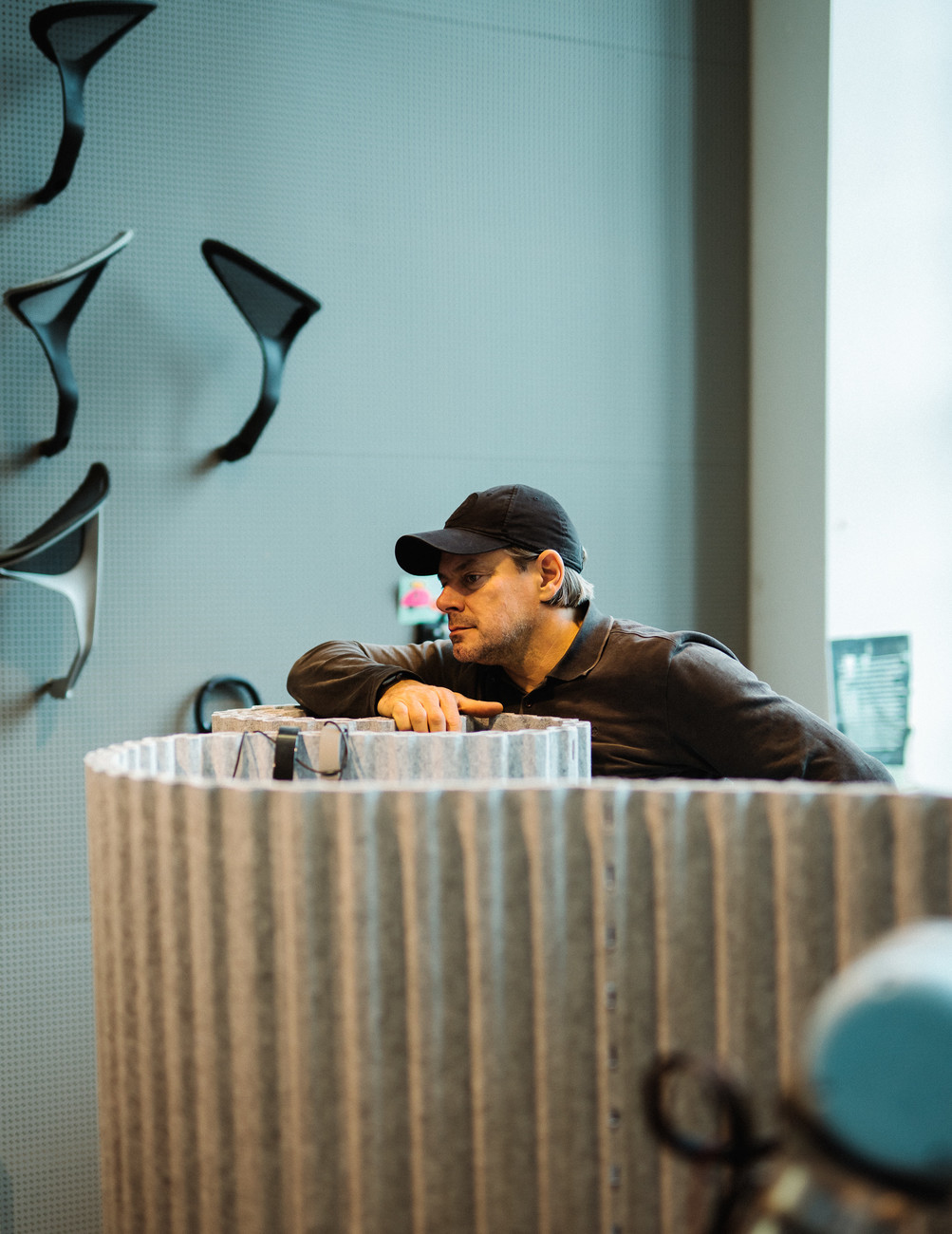 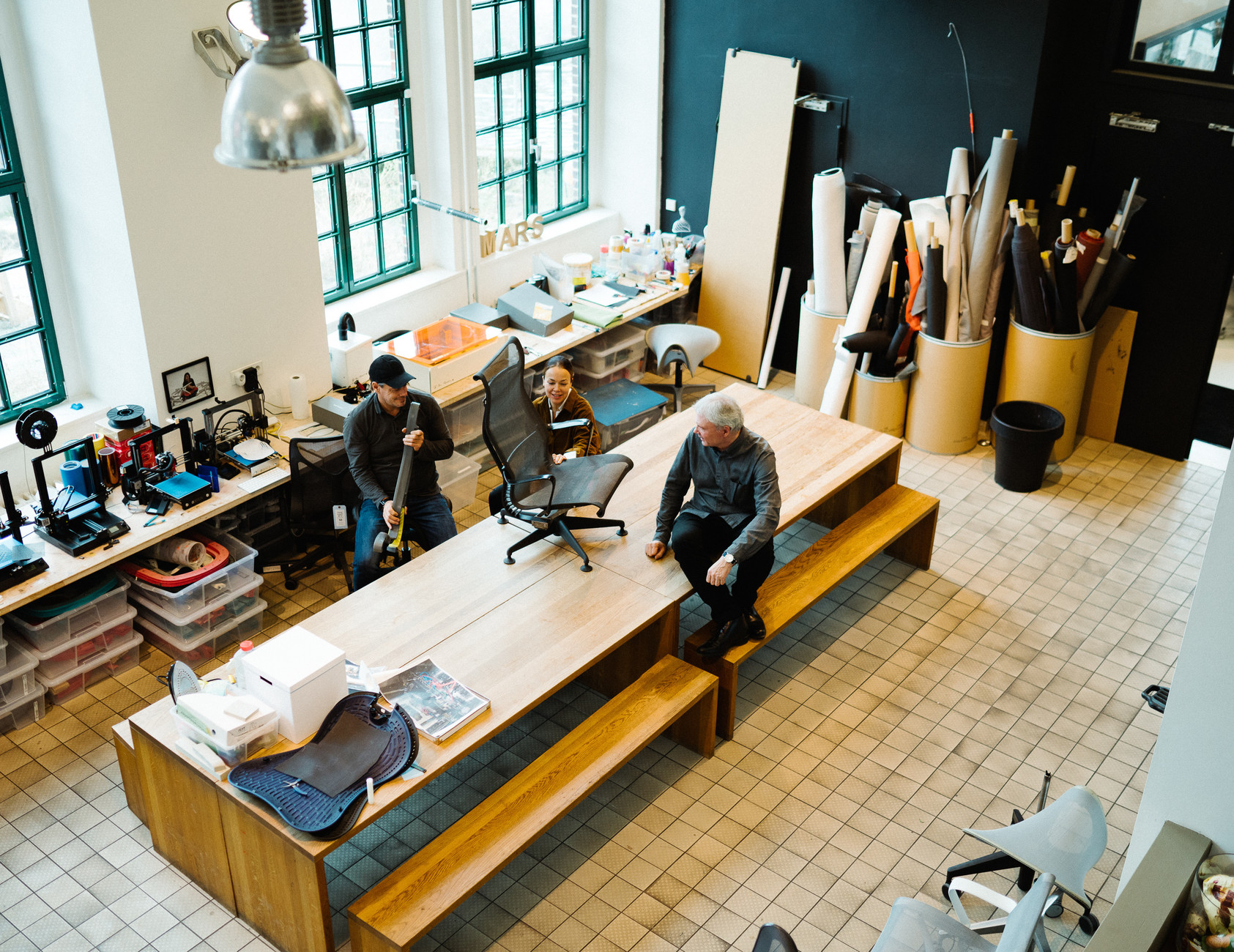 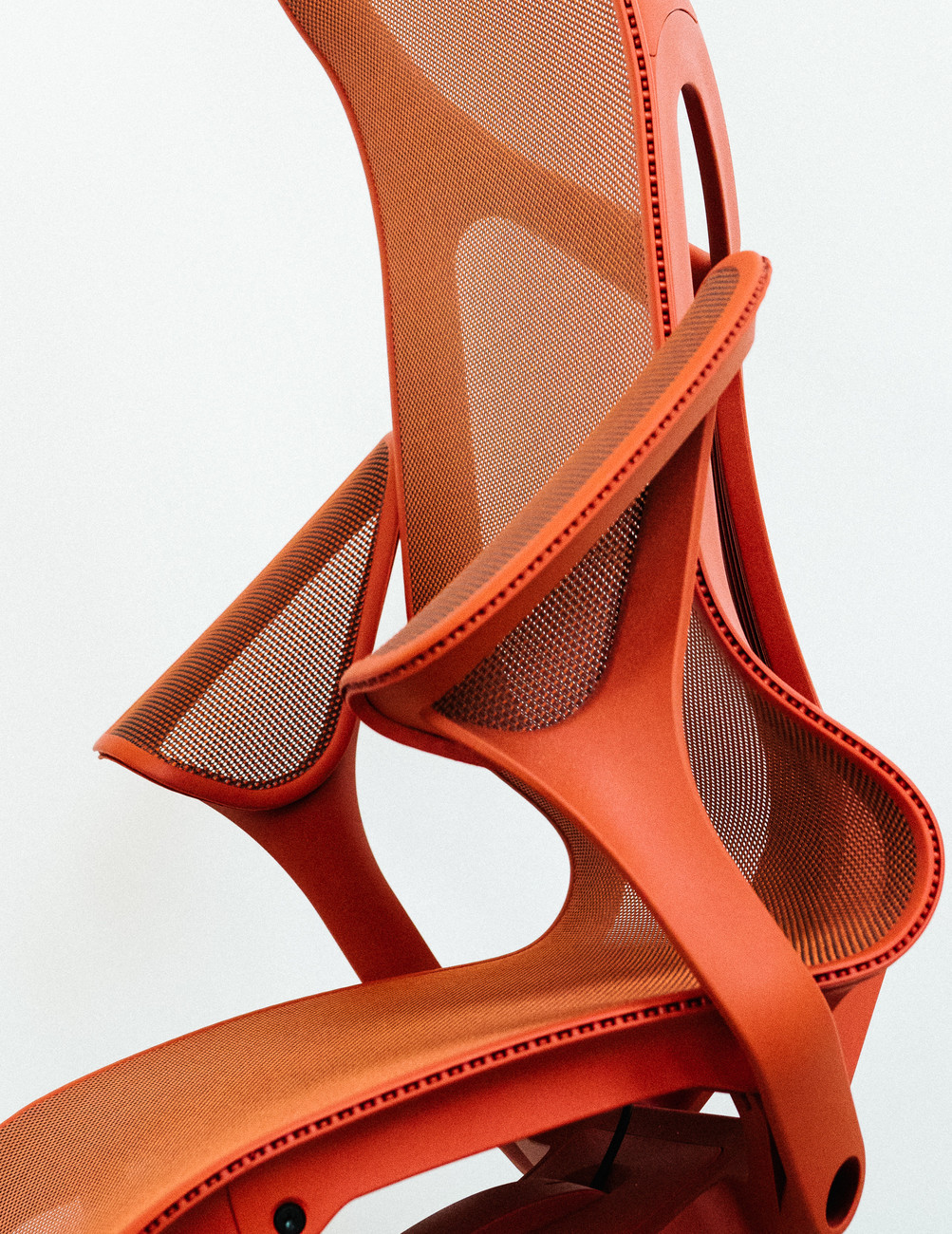 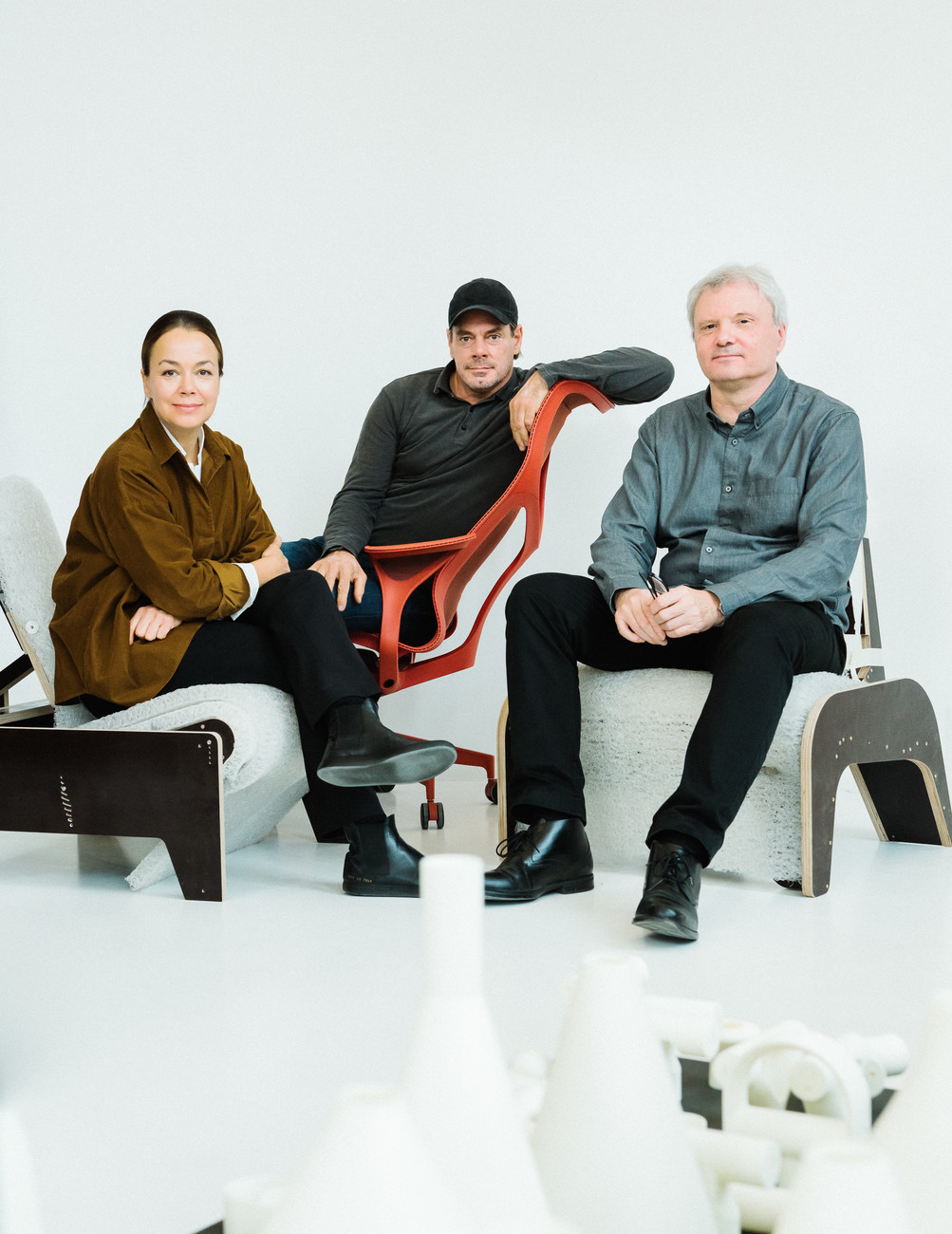 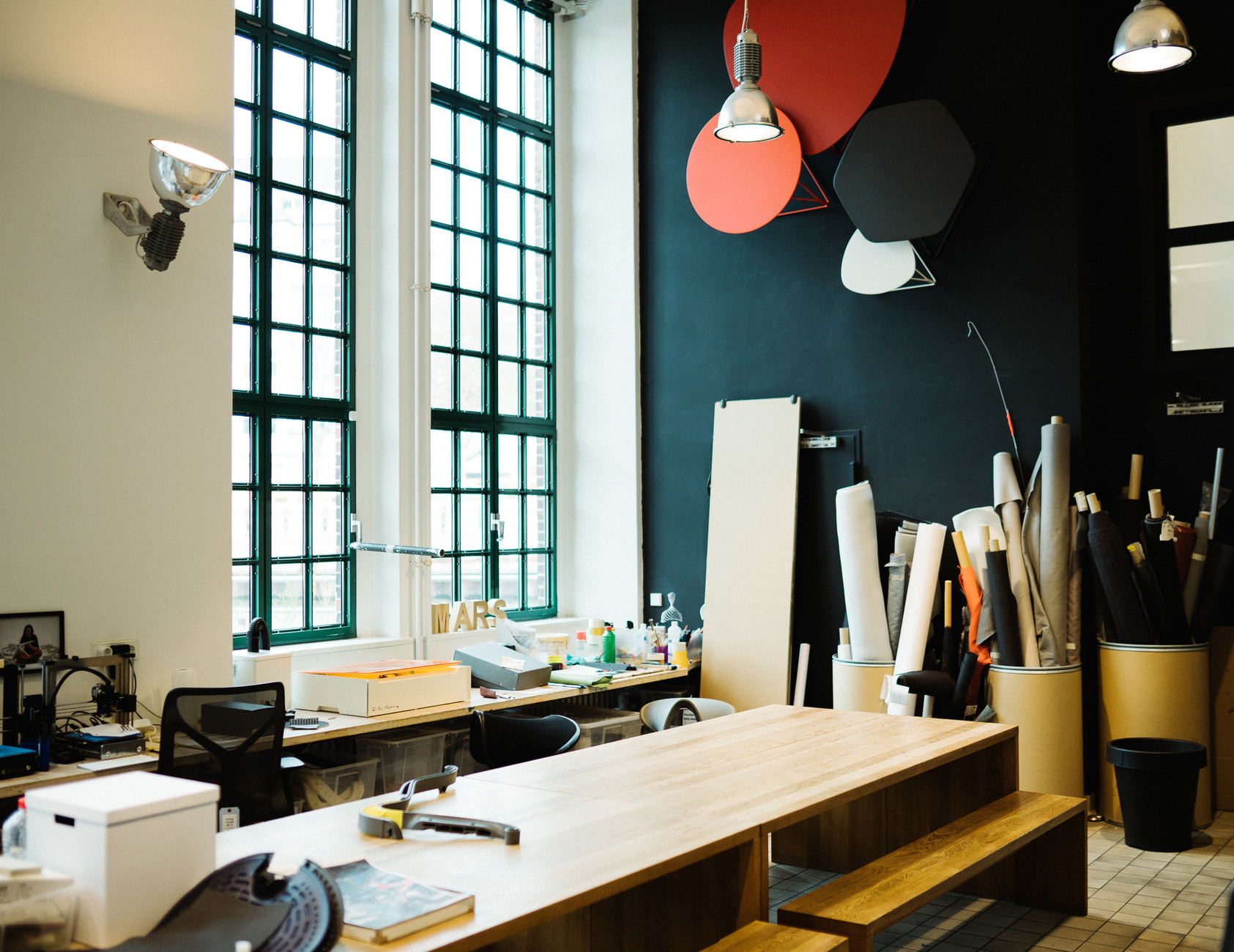 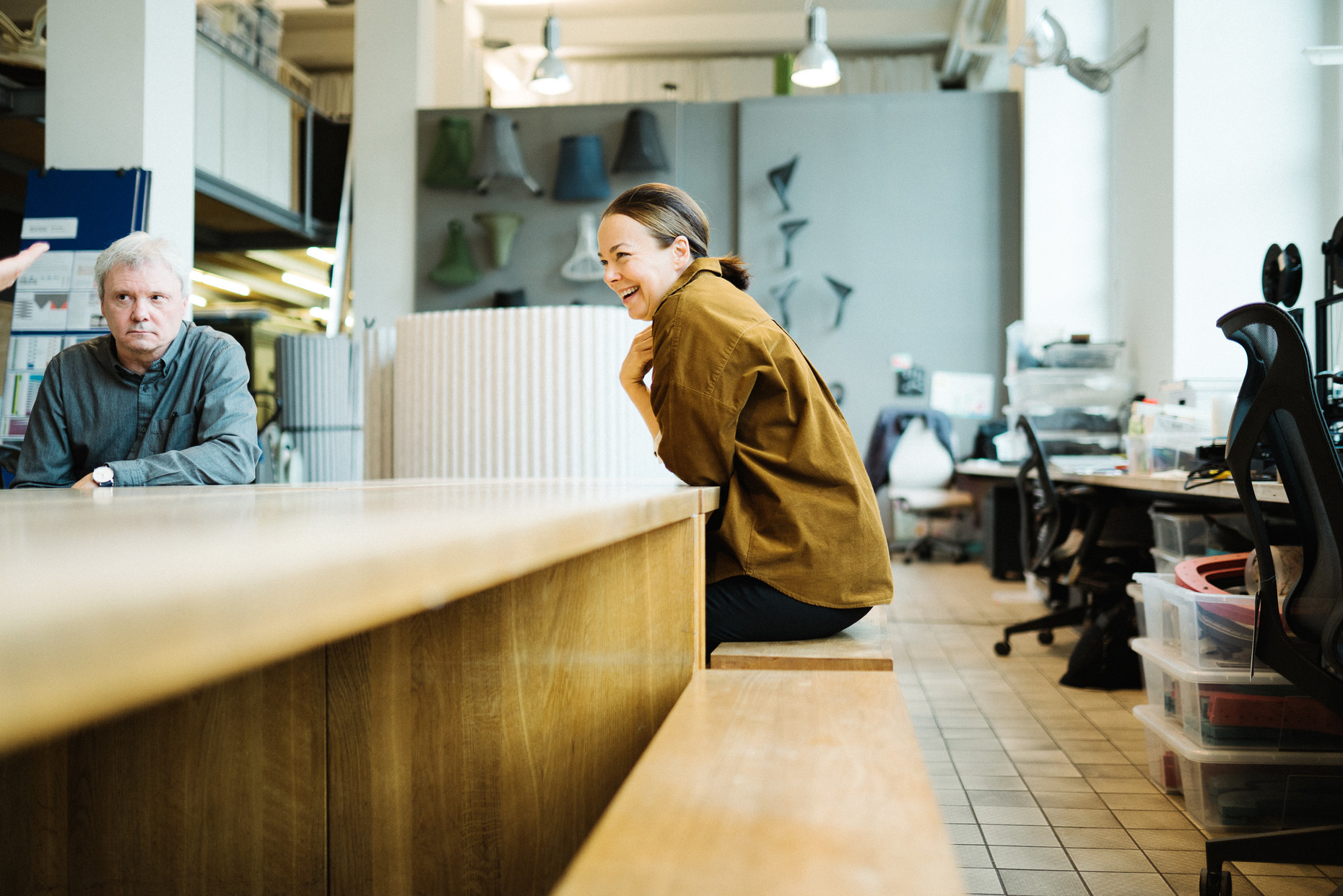 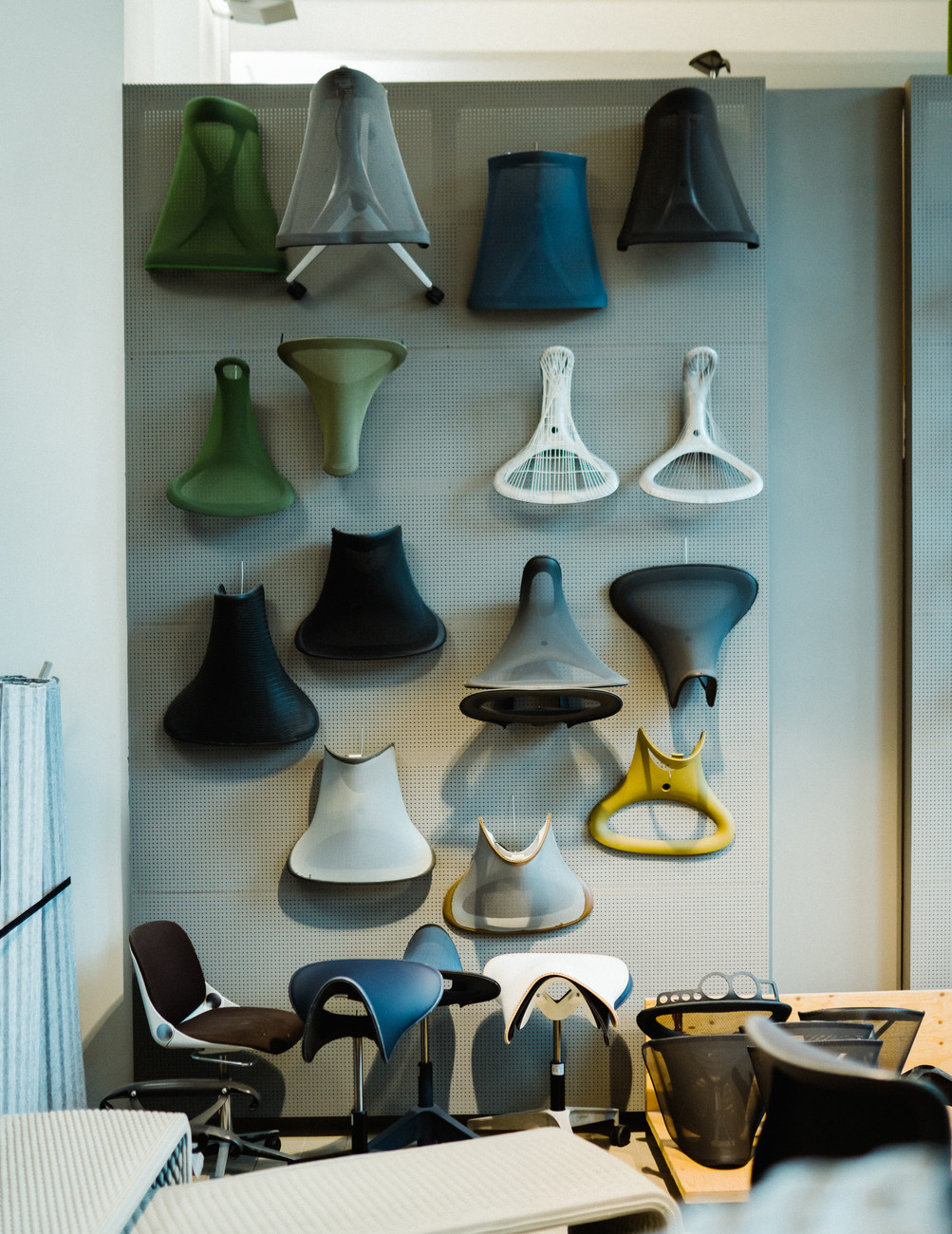 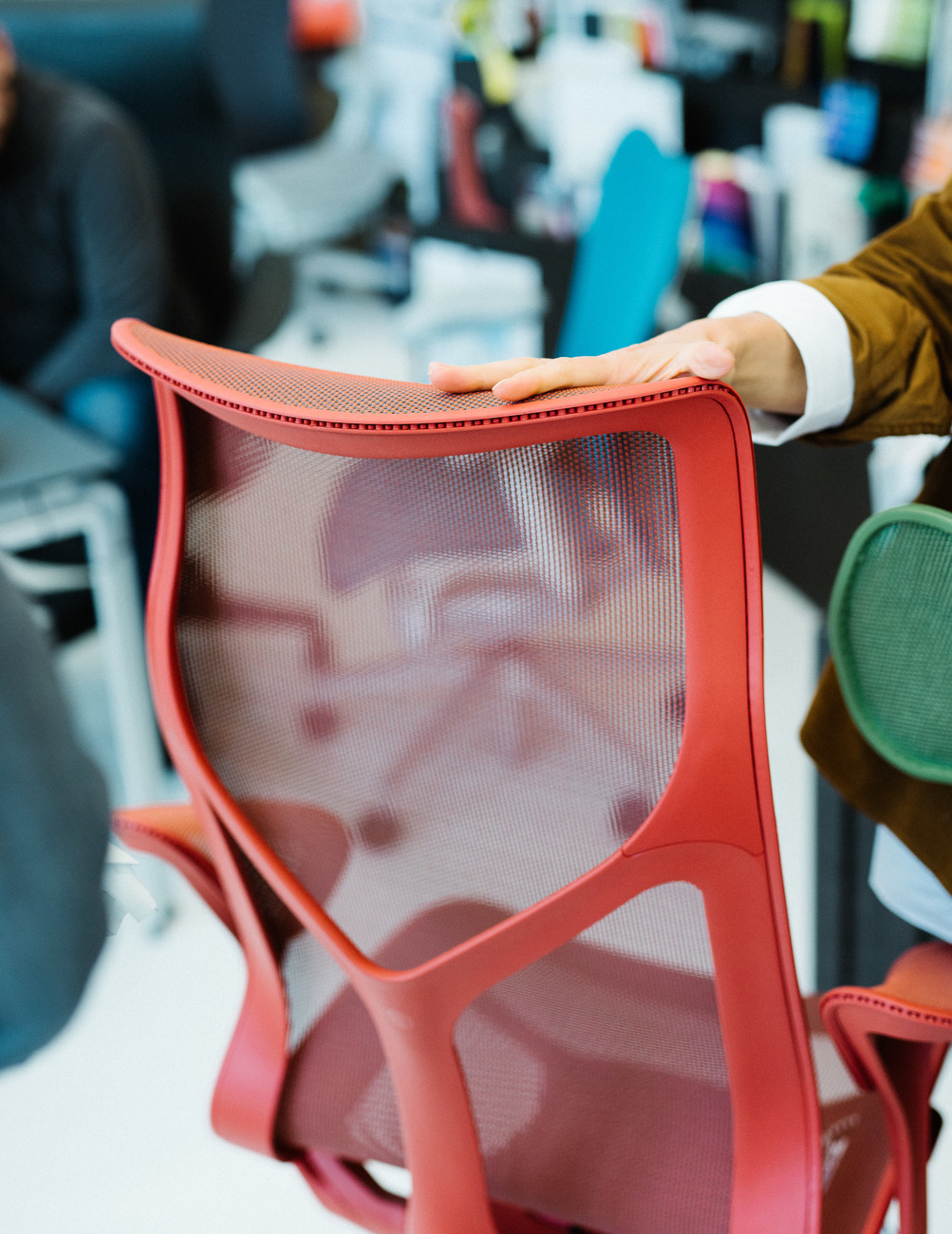 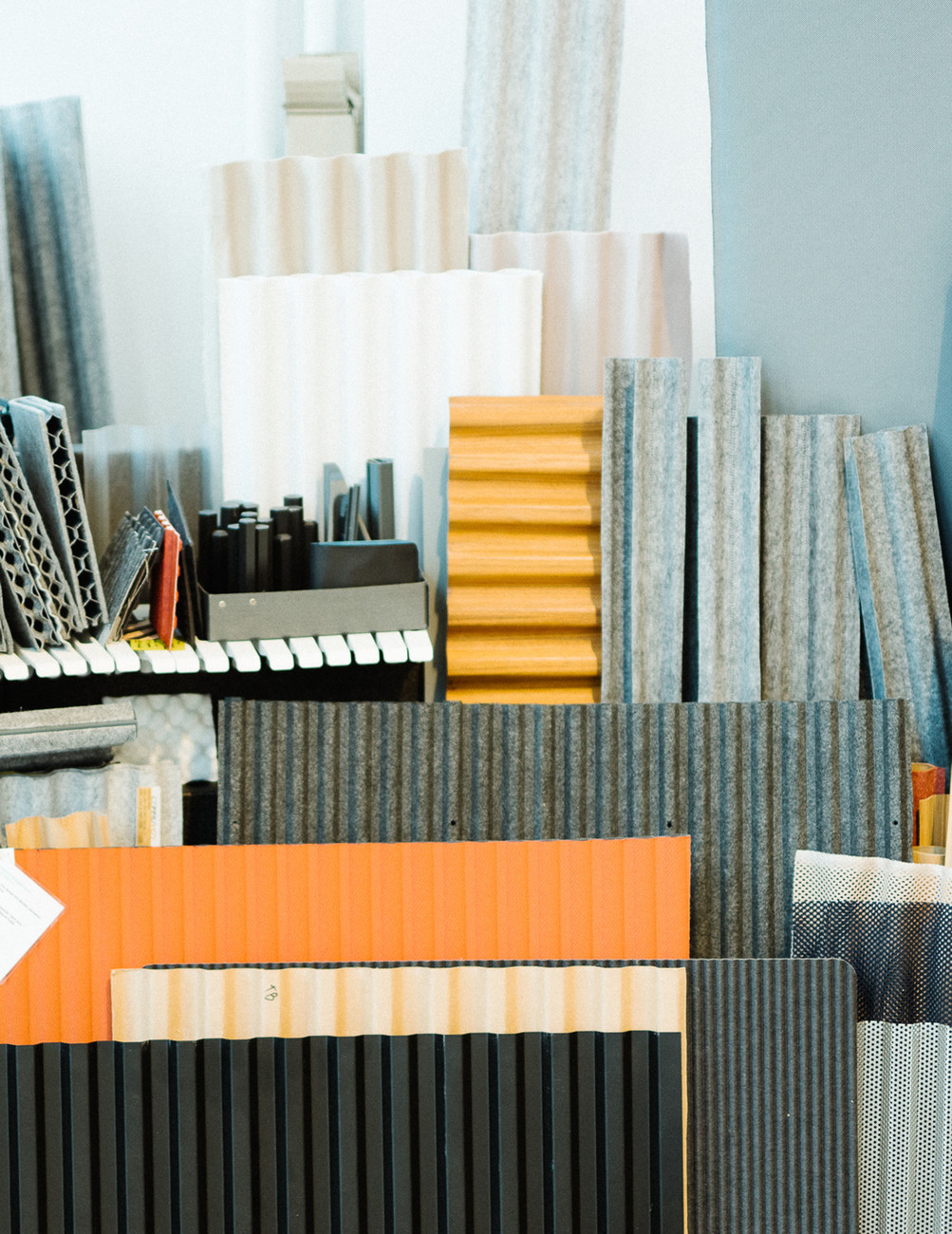 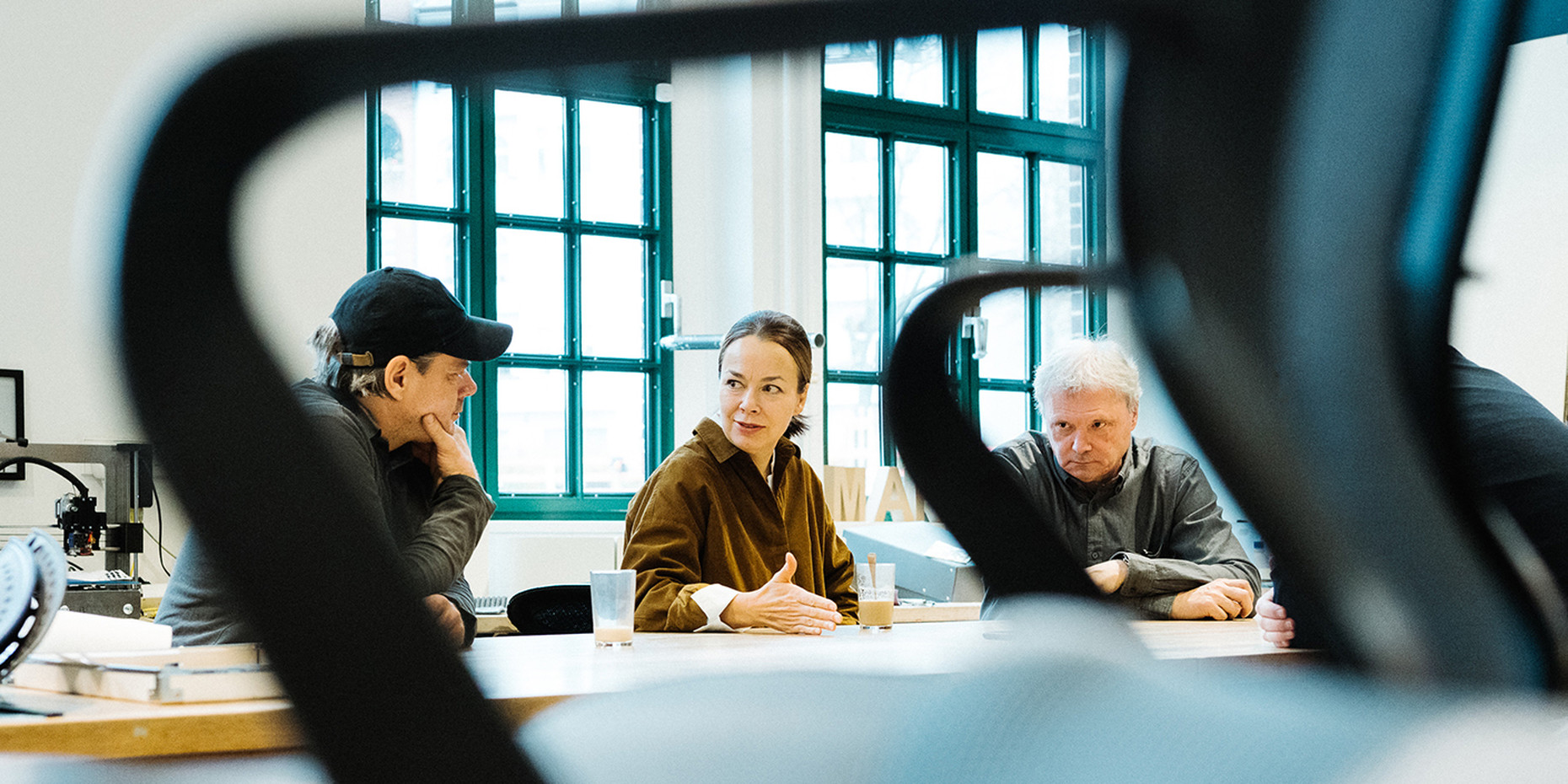 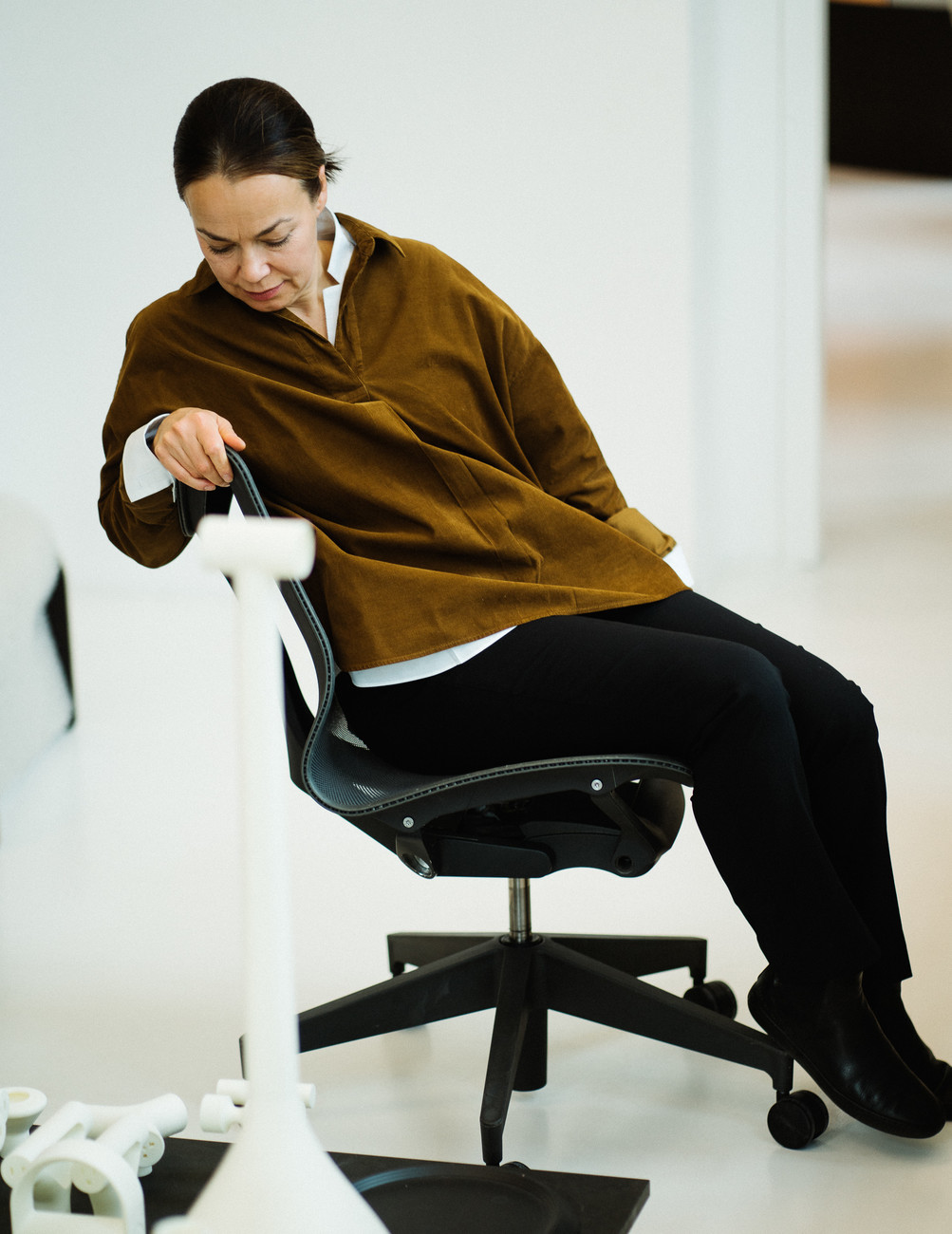 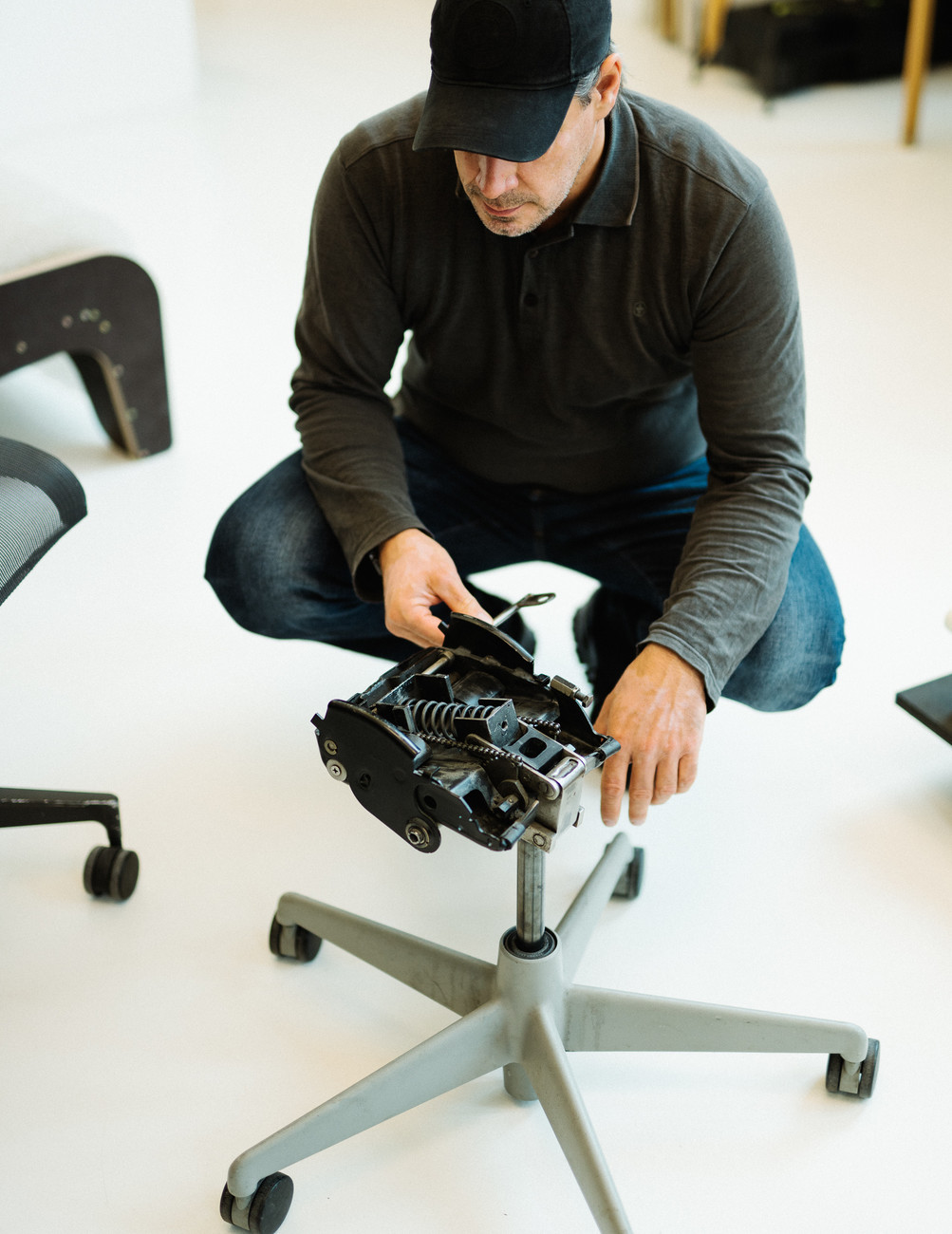 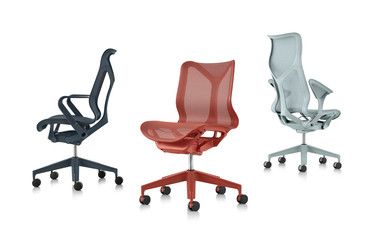 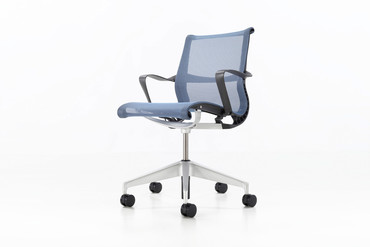 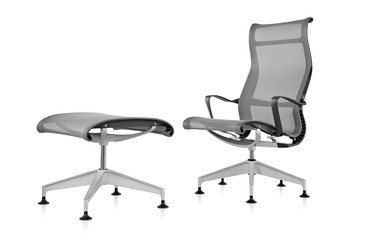 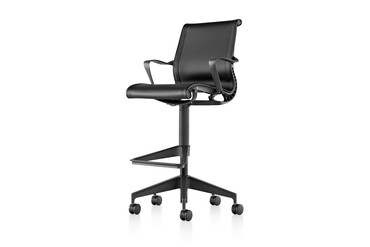 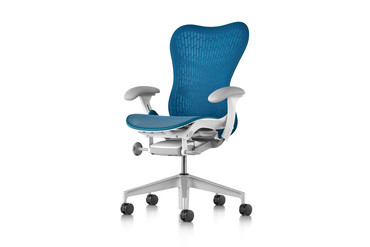 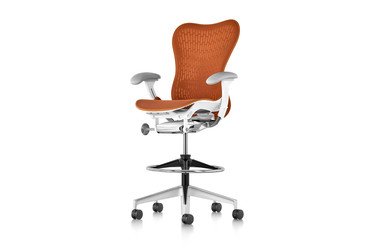