top
Take your dromedary to the beach
by Thomas Edelmann | Jul 26, 2013 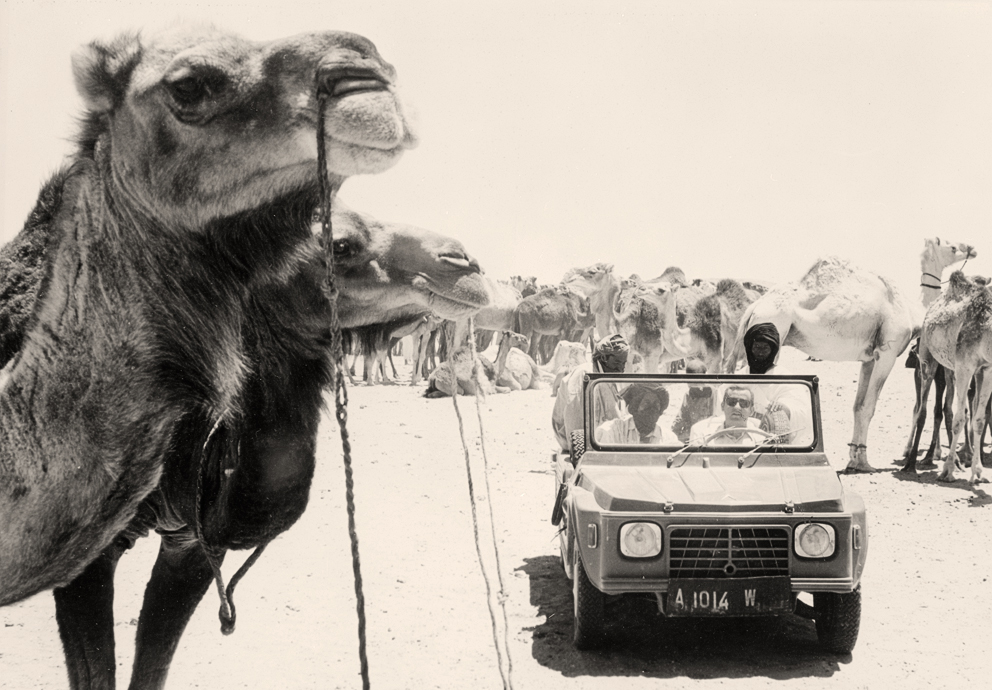 The name of the Citroën “Méhari” derived from the domesticated dromedaries of North Africa that offer a comparatively fast ride once they get moving. Photo © Citroën

Summer, sun, open top: It is now 45 years since a car premiered on the golf links in Deauville in Normandy that has since prompted many a designer or engineer to dream up new ideas for it. In Deauville of all places, in May 1968! Not that the Citroën “Méhari” is in any sense a luxury vehicle, even if the venue and the glamorous presentation might suggest something different. In keeping with the spirit of the times, 20 models in different attires took to the car-walk: in flowing Hippie robes, red bodysuits, bikinis and, all city-guerillas, with machine guns at the ready. The PR ideas of the Sixties! Not that “Méhari” really needed such nonsense. Technologically, it was based on a Citroën Dyane 6, a model introduced a little earlier and developed by the engineers at Panhard, which Citroën had bought out in 1965. The name “Méhari” derived from the domesticated dromedaries of North Africa that offer a comparatively fast ride once they get moving. France’s colonial days had, after all, only just come to an end.

An early ad brochure claimed tersely and matter-of-factly that the car was meant both as “instrument de travail” and “voiture de vacances”. The “Méhari” was intended to be a jack of all trades, a utilitarian object for life on land, at the seaside and in impassable terrain. That said, the first press release also lists the car’s advantages for public-sector users, such as the police, firefighters, soldiers or customs officers. With its air-cooled 602cm3 engine and just short of 9 horsepower, the “Méhari” was one of the typical small Citroën models of its day: the range ran from the “2CV” through the “Dyane” to the “Ami”. At 3.5 meters long, it weighed 525 kilos empty, with two Spartan seats for the driver and front passenger, with a second row for two more passengers an optional extra.

Unlike off-road fun vehicles of today, the Jeep-like compact was a robust utility vehicle, albeit it with the plainest of features. The plastic roof was hardly up to keeping the wind or the rain out, meaning it was a fairweather-only affair. Hard to imagine that a coupe with a comparatively flat side panels once counted as roadworthy. A little time was to pass until headrests and safety belts were to be introduced. The finely framed folding wind screen hardly served as a guarantee of survival if the car bellied up. In Germany, the “Méhari” was deemed un-roadworthy owing to its inflammable plastic construction, not that this impaired its popularity in vacation areas down south.

Entrepreneur with the Order of Lenin

The special feature of the “Mehari” is its body, which is made of ABS plastic, the same material as is used for those colorful Lego bricks and meanwhile for most auto bumpers. ABS panels were riveted onto a tubular steel frame. The material, construction system and manufacturing technology were introduced by plastics pioneer Roland de la Poype (1920-2012), who played a major part in the development of the “Méhari”. De la Poype was a count who during World War II had been a fighter pilot with the “Normandie-Niémen”, a French squadron that did service in the Soviet Union. Alongside French medals he also won the Soviet Union’s Order of Lenin. In 1947 he founded “Société d’Etudes et d’Applications de Brevets” (SEAB), which developed all manner of plastic products. In the early 1950s he invented the shampoo portioning pack for L’Oréal – it boasted a design by Victor Vasarely.

The count was inspired by the British “Mini-Moke” but replaced its conventional metal structure with the combined body using light, dyed plastic. The carbody was designed by Jean-Louis Barrault (the designer, not the actor) who until then had concerned himself little with automobiles – from 1963 to 1988 he designed all Moulinex appliances. In fact, he was also the brains behind the French Lotto signet. The “Méhari” has a comparatively additive structure, with the hood simple being fastened with leather straps.

Citroën kept building the “Méhari” until 1987. In total, some 144,000 units rolled off the belts, about 1,200 as a 4WD version introduced in 1979. Unlike the VW jeep, (“a car for men who have to get to their destination”, as the ad claim read in 1970), the “Méhari” had no military feel to it. Alongside manufacturers of replica kits (such as “El Cid” in Düsseldorf), the French plastic beach auto has repeatedly inspired designers to try and go one step further. For Matali Crasset it’s “ideal for the country, very simple and practical.” In 1996, Philippe Stark and Kartell presented an open study “Toto la Toto à Toto” in Milan – a white descendant of the “Méhari” and a “non-car”, as the designer proudly announced. But nothing came of the studies and models. Starck’s little electric car “V+” for Volteis quotes ideas from the “Méhari”. Yet despite the finely designed seats with the woven Dedon fibers, it somehow is more of a pimped golf cart. Swiss auto pimp and designer Frank M. Rinderknecht presented a concept car called “BamBoo” at the 2001 Geneva Auto Salon, showing what could happen if you merged technology today and integrative design with the beach visions of yesteryear: A colorful round-eyed something on wheels, with the plastic body featuring sustainable bamboo parts.

And only recently it was not the distressed PSA group with its Citroën marque but Japanese automaker Toyota who presented the design study called “Me.We” by Jean-Marie Massaud. The European Toyota Design and Development Center ED2 is based in Nice. Meaning that the collaboration between the renowned industrial designer and Toyota was a decidedly inner French affair. Yet “Me.We” does not simply find a new formal take on the “Méhari”, but also returns to its radically minimalist concept.

Roadworthy further on down the road?

The name “Me.We” is meant to symbolize a linkage of individualism and altruism, and stand for a future more responsible form of mobility. The electric car has an aluminum tubular grid frame, and a body made of foamed polypropylene that weighs in at only 14 kilos. The floor, hood and roof are all made of bamboo. The vehicle with its wheel hub motors (with drives for either two or four wheels) is expected to be a lightweight – at max. 750 kilos. And the dyed plastic offers countless possible ways of giving its outer skin a 3D texture. “Me.We can be a pickup, a convertible, an off-roader and a small urban car, and all at once,” claims Toyota. The interior boasts freely-suspended upholstered armchairs and sofas. Unlike BMW’s “i3” electric plastic auto, with its crash-proof carbon cell, for all its visual appeal “Me.We” is currently pure futurism. It’s anyone’s guess if and when a comparable vehicle actually gets built.

Small wonder as the road license office will no doubt have a hard time approving a polypropylene body. The material cannot only be 100-per-cent recycled, as manufacturers and designers love to emphasize, but especially if it is highly inflammable is not fit for outdoor use. The open-pored structure of the “Me.We” panels may look great when it’s new, but is unlikely to be nearly as good at resisting mud, dirt or sand as was the predecessor. Which is a bit of a shame. But then it’s a long path from beautiful image to functioning fun product. Even, or precisely 45 years after “Méhari”. 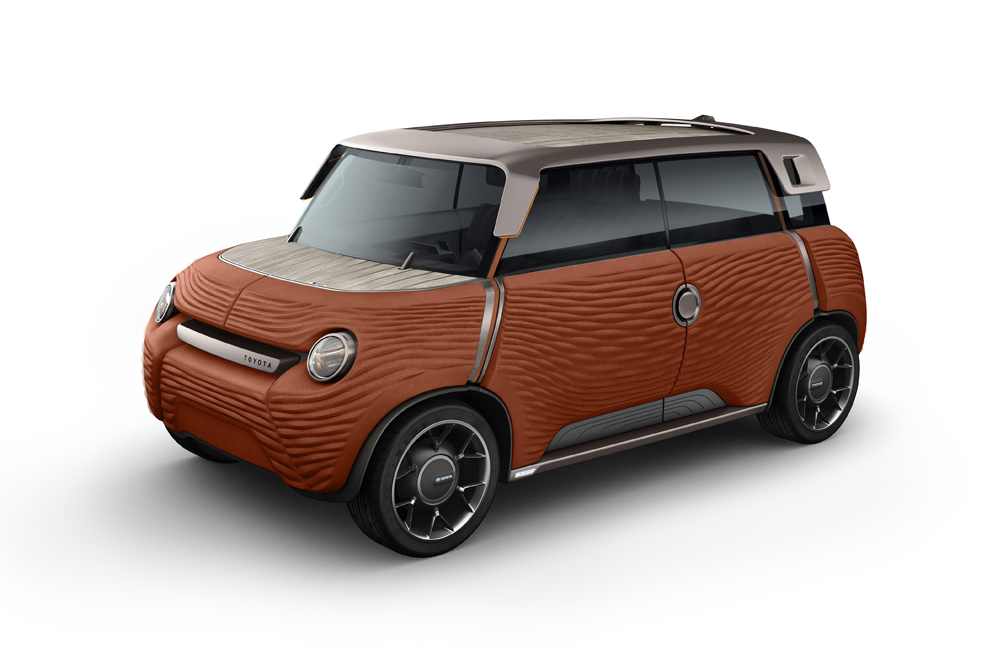 The „Me.We“ by Jean-Marie Massaud for Toyota should express individuality on one hand („Me“), on the other responsibilty fort he society („We“) in sense of eco-friendliness. Photo © Toyota 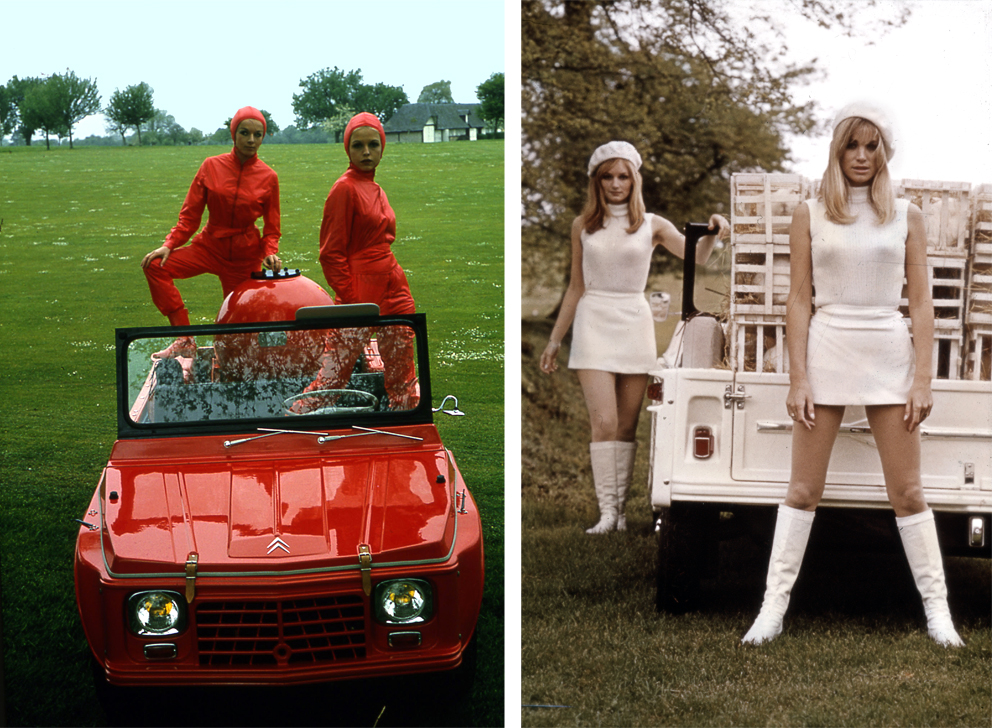 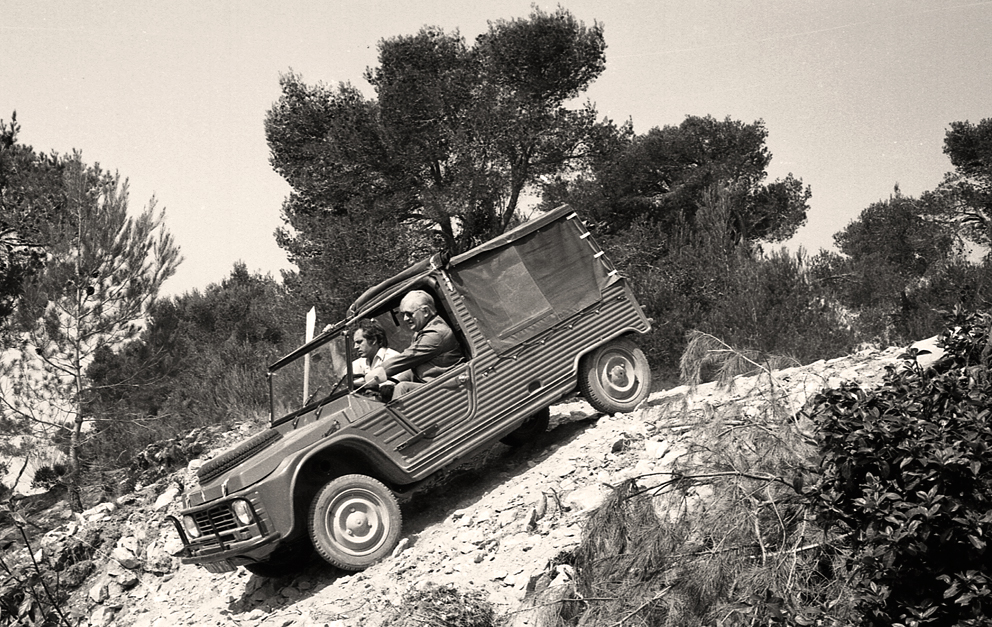 An allround-talent for the life at the countryside and at the sea. Photo © Citroën 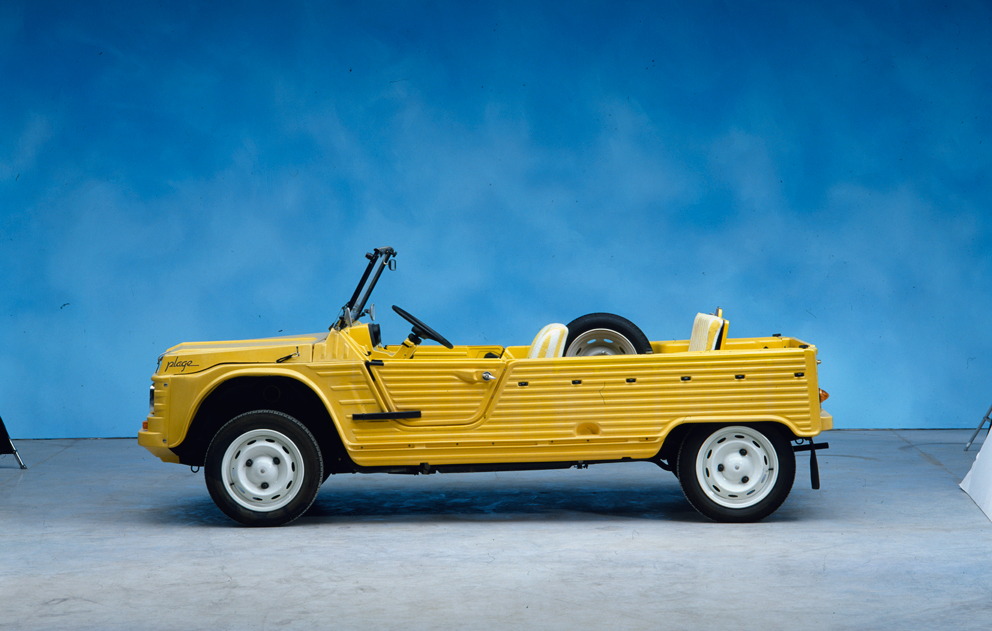 The „Méhari Plage“ for the beach. Photo © Citroën 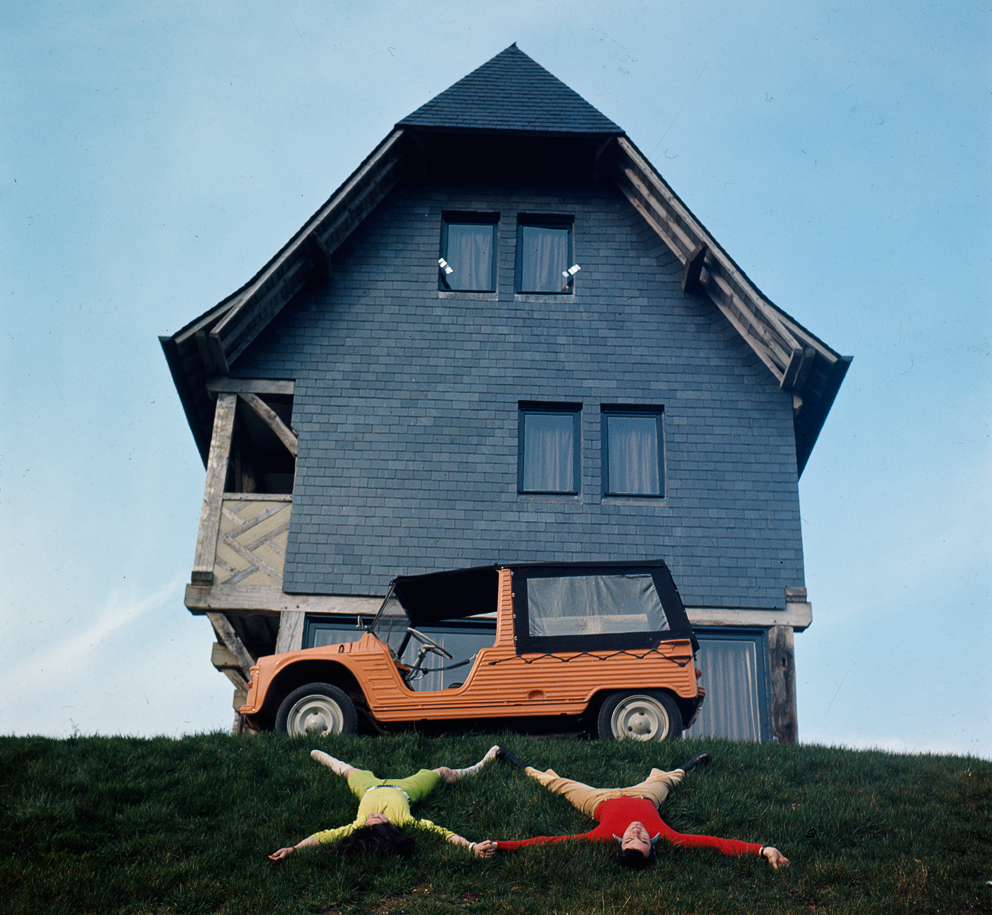 And the fun-car was born. Photo © Citroën 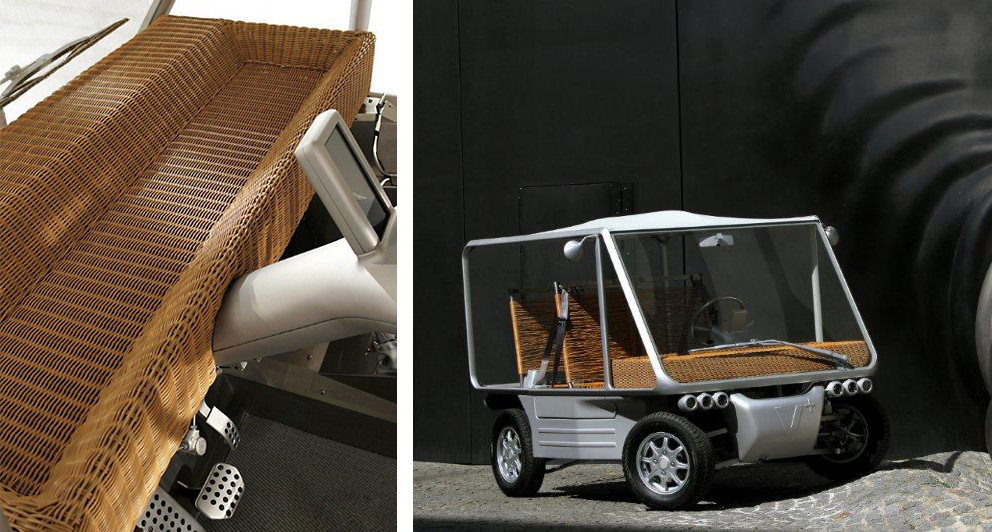 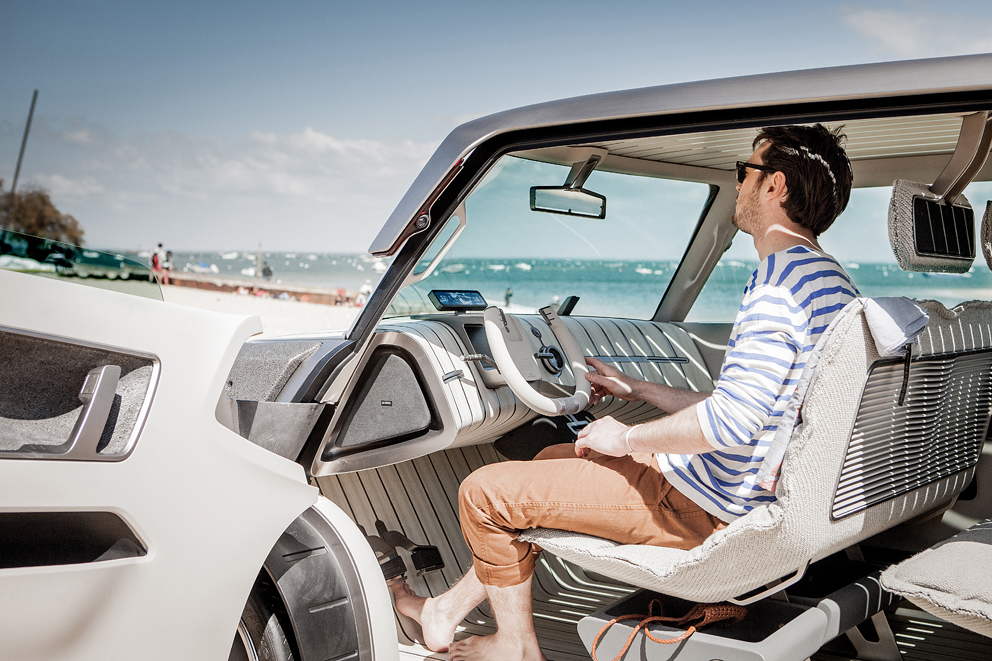 The „Me.We“ can be a pickup, a convertible, an off-roader and a small urban car, and all at once, claims Toyota. Photo © Toyota 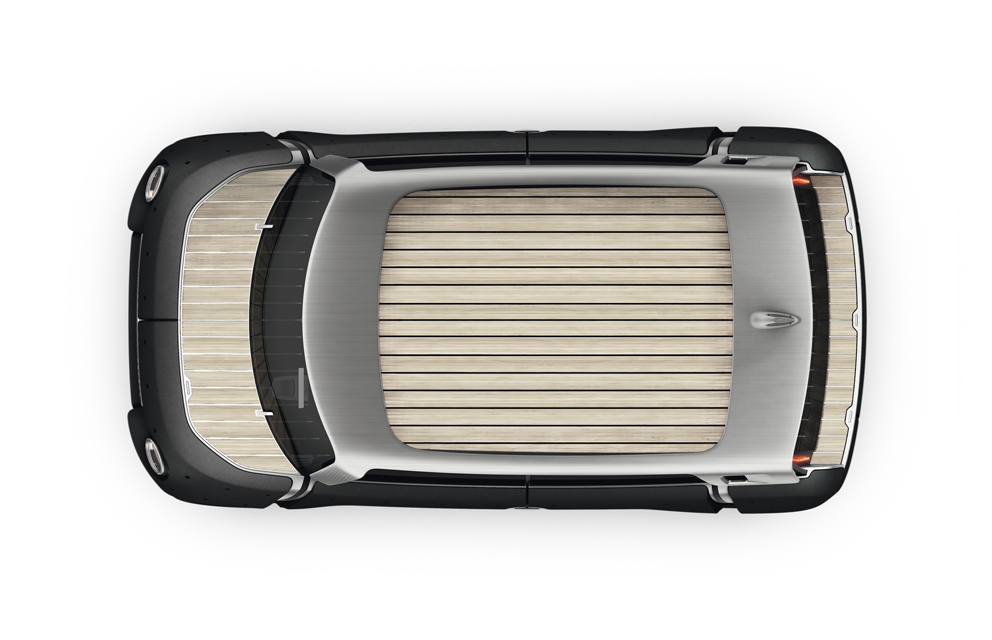 The „Me.We“ is designed of sustainable material like bamboo for the roof, hood and floor. Photo © Toyota 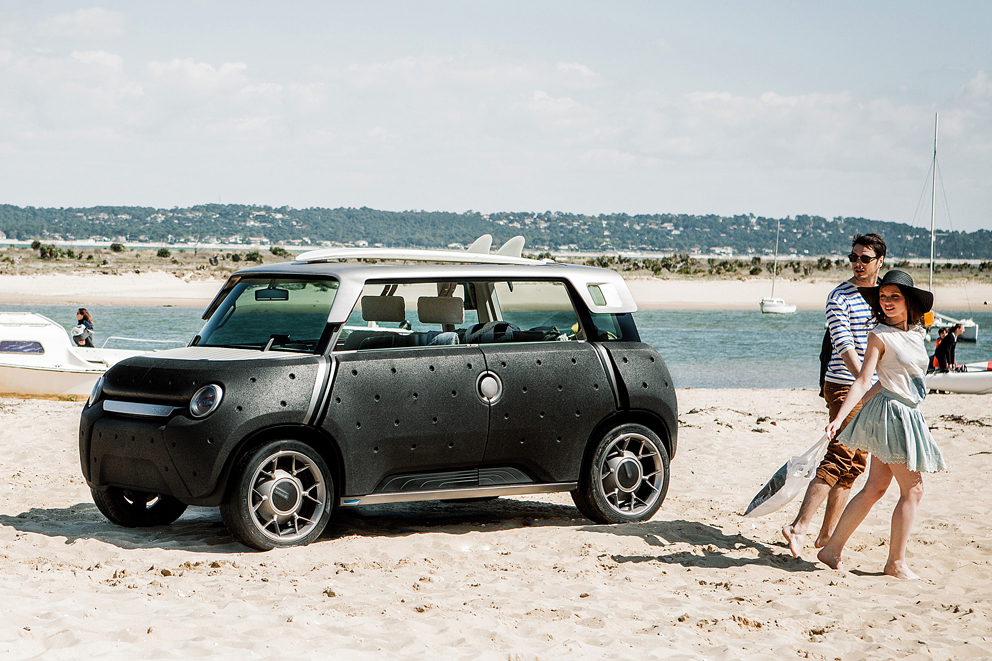 It’s anyone’s guess if and when the „Me.We“ or a comparable vehicle actually gets built. Photo © Toyota 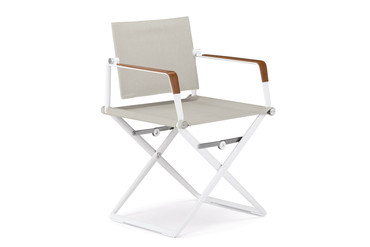 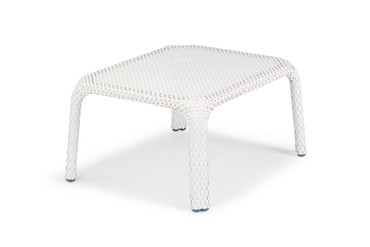