Broad is the field in which architecture enjoys itself, and the ground on which the architects stand is not always one they like to share with others. Yet in Venice there are some exciting presentations that consciously seek to counter narrowing the tasks at architecture and urban planning's doorstep. They do so not rarely by means of installations that reflect on specific phenomena to do with space and building in order less to present these discursively and more to render them tangible to the senses.

Be it the Dutch Pavilion, where taking Its cue from "Re-set" we are shown different way for tackling existing structures - in a purist spatial installation made up of mobile strips of fabric that glide through the room along tracks in the ceiling, permanently changing it, allowing the viewer to constantly perceive it differently. Be it the US Pavilion where blinds hanging from the ceiling present an entire encyclopedia of spontaneous urban guerilla projects, ranging from a temporary wedding chapel for lesbians in New York’s Central Park, though benches for neglected bus stops and homes for bats, to chair bombing – here, seats made of pallets are distributed about public space. The focus is always on making space in all its different primarily public facets visible as something we can change, experience and perceive.

As a result, the one or other rigidity gets loosened somewhat specifically in the Giardini, where the individual country pavilions vie with one another. Clearly, many architects (and other groups, too) set out to lead the trade out of its self-created Babylonian imprisonment. Okay, not everywhere does this succeed, and the one or other piece is all too simple; yet in many places we can sense the wish to place an architecture from below alongside the star cult and to promote a form of building that does not isolate itself and turn a deaf ear on the legitimate claims of its current or future users.

Short is the list of the pavilions that do not get lost in the media worlds (e.g., Russia) or simply present some local project or other: Alongside the two afore-mentioned ones, Kumiko Inui, Sou Fujimoto, Akihisa Hirata and Naoya Hatekayama at the Japanese Pavilion (it won the Golden Lion for best pavilion) demonstrates impressively how to develop a “Home-for-all” after the tsunami and Fukushima disaster. Great Britain opt for the witty title of “Venice Takeaway” where ten teams of architects hunted for ideas in other countries that could be suited to change British architecture – for example the somewhat ironic suggestion of a floating community (borrowing from Amsterdam) for London’s Royal Victoria Docks. And at the Polish Pavilion Katarzyna Krakowiak and curator Michael Libera draw on Dickens for their title “Making the walls quake as if they were dilating with the secret knowledge of great powers” to explore how “sound” can be exhibited – they turn the pavilion into a chamber resounding with collective interventions.

VI. Protecting your own interests

The curators of the Israeli Pavilion are decidedly political, quoting on the rear wall former US Secretary of State Alexander Haig with his cynical sentence:

“Israel is the largest American aircraft carrier in the world that cannot be sunk ... and is located in a critical area for American national security.”

“To The American Pavilion”

The exhibition then focuses on the changes in architecture in Israel since 1973 and how it has been influenced by America, its capitalist system and its strategic interests. The socio-political side to building is highlighted using merchandise items such as small dolls of the President, a build-your-own container for settlers, or money box resplendent with Uncle Sam asking you to “save to save your country”. Rarely has a Biennale had such an official and yet realistic and critical contribution.

In the German Pavilion Muck Petzet, photographer Erica Overmeer and Konstantin Grcic as the exhibition designers have been alliterative: RRR – Reduce, Reuse, Recycle. They not only write the triad of conscious avoidance of architecture in large letters on the façade, they decline it using terms such as perception, maintenance, behavior, renovation, conversion, filling, redesign, subtraction, addition, materials recycling, recycling shapes, and 16 actual projects.

Contraction and reduction in size are important planning tasks and even where there’s still growth, the idea is not a clean slate and new builds, but revitalization, conversion, greater densities, additions, both in existing buildings and in the urban fabric. The approach to existing buildings is culturally and economically decisive for our future, and the ambitious climate goals will only be achieved if we improve what we have and renew existing infrastructures.”

Petzet advocates alternative growth that links the concept of the new back to what exists. Here, architects don’t get spotlighted, but a total of 16 results of efforts showcased. Whereby the presentation is weak because the 16 are only displayed cursorily in the Pavilion as groundplans, with the user structures (who lives here, who got ousted?), urban contexts, social issues and gentrification processes left out. You can’t really judge what the costs/benefits of each individual project are. The one or other (luxury) modernization provokes opposition.

Essentially, the idea is to re-use, transform, re-interpret or, if otherwise not possible, recycle what we already have. All of this attests to a great respect for the existing, which points to a fundamental change. Suddenly as regards the impact the slightest of interventions seems better and no change at all best. Taking all the factors together, RRR plus avoiding architecture, we sense a new ethics of building that centers no longer on the Modernist value of the new.

Anne Lacaton and Jean-Philippe Vassal are cited as the crown witnesses of such an expansion and expanded estimation of “building with existing buildings”: 16 years ago they improved Léon Aucoc plaza in Bordeaux by not changing anything. All they did was encourage the plaza be regularly tended.

“We feel it our duty to start at zero when considering any new task. This can even mean fundamentally questioning our discipline, i.e., the way architecture is practiced.”
Jean-Philippe Vassal

The German Pavilion is a breath of fresh air, and not just thematically. Konstantin Grcic has used astonishingly few means to successfully transform the difficult spaces into a clear and pleasant ensemble. Anyone who has over the last 20 years observed how hard a time the artists and designers have had in the forever controversial German Pavilion (and this applies to both the art and architecture shows) will be filled with admiration for Grcic’s easygoing and somehow matter-of-fact solution.

On balance, three factors make all the difference: he’s put the entrance on the side, and firstly has calmed the area in front of the central entrance making it a place to tarry a while, and secondly enabled us to perceive the sequence of spaces within with their visual links in a different way. And the Erica Overmeer photographs (they’re wallpapered on) help that along with the visual links the projects presents always seem to really be here, and not to exist merely as abstract documentation. If you look through the central space at a photograph in one of the side halls, you can be forgiven thinking for a moment that you are looking at the building in question. Last but not least Grcic has come up with an homage to Venice that is as charming as it is unobtrusive, using the community’s high-water boardwalks as walkways and benches that structure the exhibition space.

Even if the issue addressed relates primarily to European and German conditions, i.e., the shrinking size of cities and the existence of sound buildings, rarely has the link between ethics, building policy, individual projects worthy of debate and a presentation that is sufficiently appealing for a show such as the Biennale but never superficial been so well forged as this year.

Which leaves us with the Danish Pavilion, where there’s a lot of thinking about a new and different Greenland, which has suddenly moved from the edge of the globe to the center of attention. “Possible Greenland” is the name of the undertaking, which not only squares up to climatic changes in the Arctic but also to its historical and cultural features. At root, the focus here is on nothing less than what an independent Greenlandic society, a new nation, could look like and how architecture could help. Fishing and seal-hunting, tourism, alcohol, demographics, energy and its sustainable use, the mixture of ethnic communities and languages, all this and more gets presented and debated. Meaning it’s more a matter of questions than solutions, and thus nothing looks pretentious. Not that there aren’t a few major projects on show. For example, how Greenland could in future be linked by sea and air to the rest of the world is shown in the project for a “global hub” in Nuuk, in which among others the architects at the Bjarke Ingels Group (BIG) took part. Their proposal takes linking ship and airports literally, creating a veritable futuristic hub of runway and shipping pier.

On one of the walls of the Danish pavilion we can read something that could equally apply to many open issues and projects the world over:

“What is Your Vision?
There is no shortcut to a better future. There are a lot of choices to be made. A lot of barriers to be broken down. A lot of dilemmas to be solved. We need to define our values and formulate a vision for Greenland to guide us in the right direction. Only a broad debate can help us make wise decisions and develop smart solutions. Let the debate go on ...”

One of the insights offered by Venice is that the common ground is anything but stable. It needs to be forever created new, differently and above all in an open dialog including as many people as possible. Which also means that architects and developers are no longer alone. Something they will have to get used to. 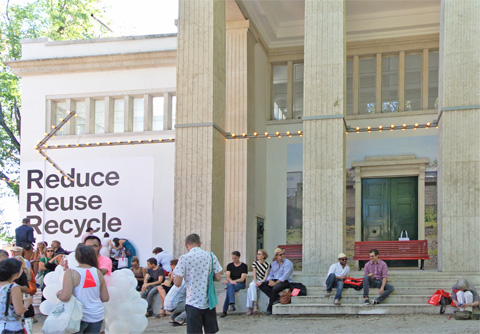 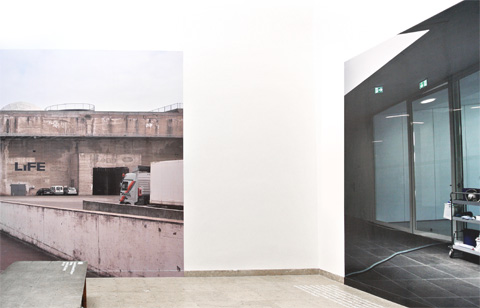 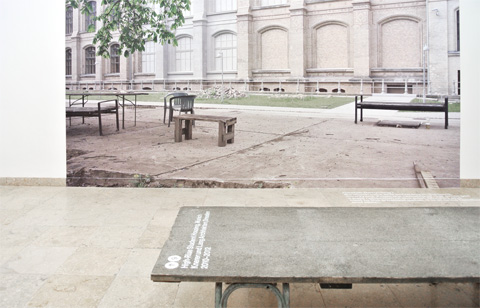 Realistic perspective: Erica Overmeer’s large-scale photographs, presented at the German pavilion, sometimes seem as if one would actually stand in front of a real building, photo © Thomas Wagner, Stylepark 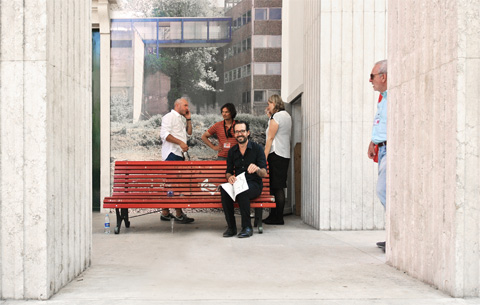 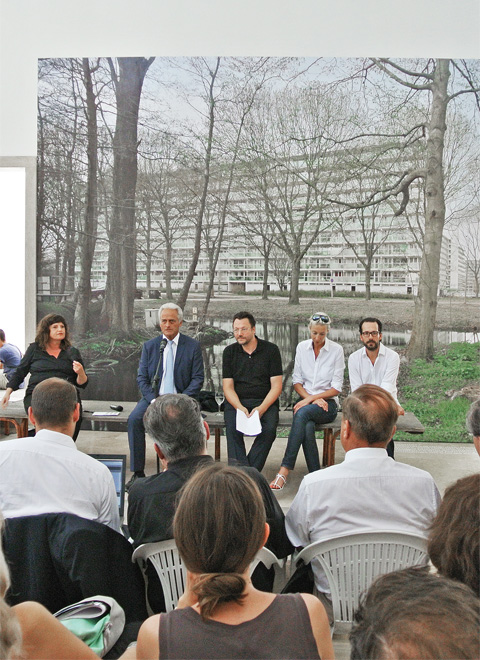 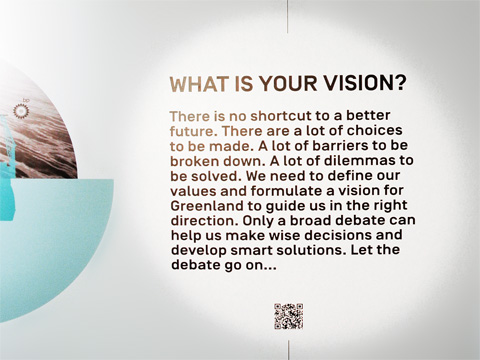 This discussion will probably not only affect Greenland in the future, photo © Thomas Wagner, Stylepark 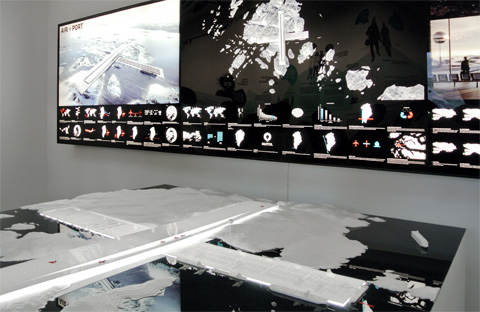 Greenland’s bridge to the world: The major project of a “global hub” for the city of Nuuk aims to connect Greenland with the rest of the world via air and water and is presented at the Danish pavilion, photo © Thomas Wagner, Stylepark 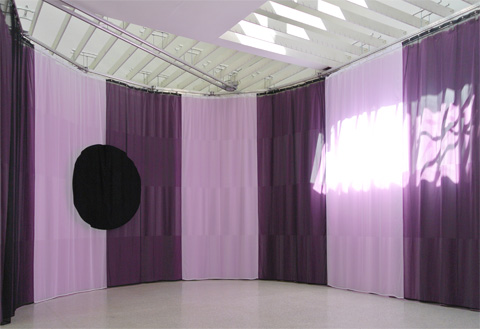 Discover what’s possible: The curators of the Dutch pavilion use this minimalist installation of movable cloth panels to advocate the importance of already existing constructions, photo © Thomas Wagner, Stylepark 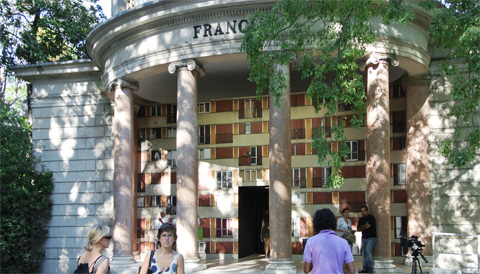 The French pavilion has its own photo wallpaper too, photo © Thomas Wagner, Stylepark 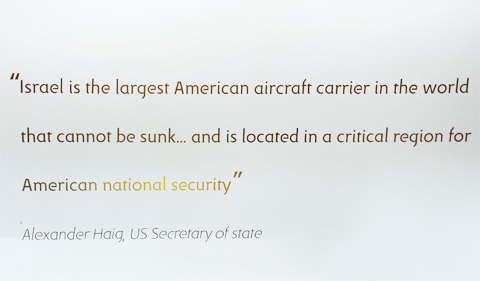 This quote at the Israeli pavilion is from Alexander Haig, former American Secretary of state, photo © Thomas Wagner, Stylepark 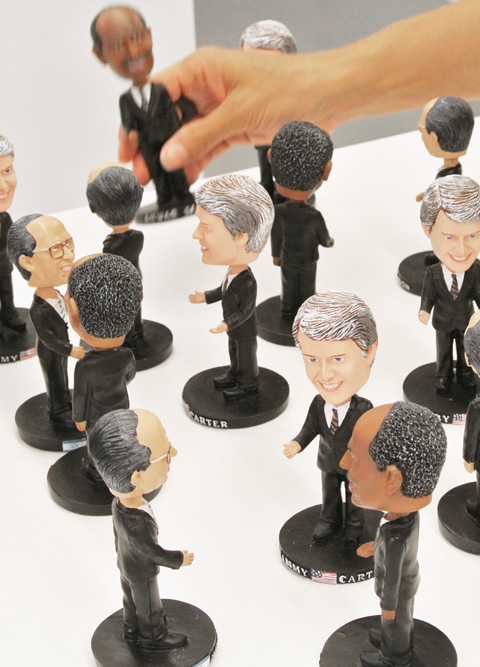 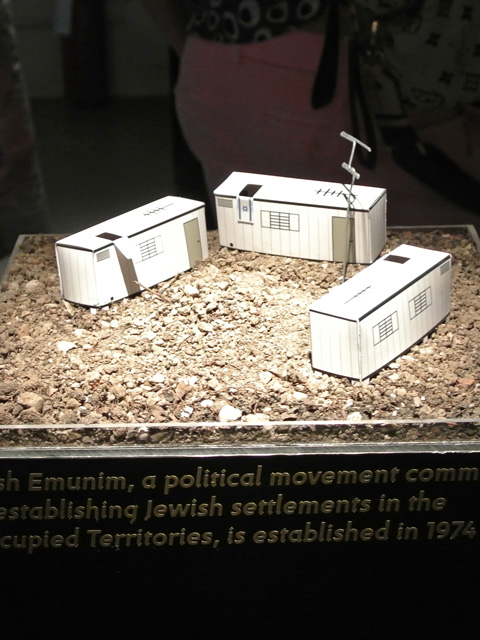 Settlement policy as a construction kit: One of the merchandise products at the Israeli pavilion, photo © Thomas Wagner, Stylepark 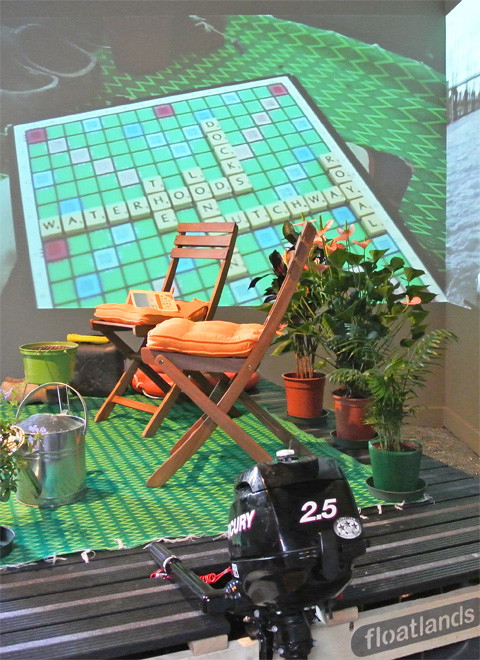 How to look on other countries in a humorous way: “The Dutch Way“ by dRMM at the British pavilion, photo © Thomas Wagner, Stylepark 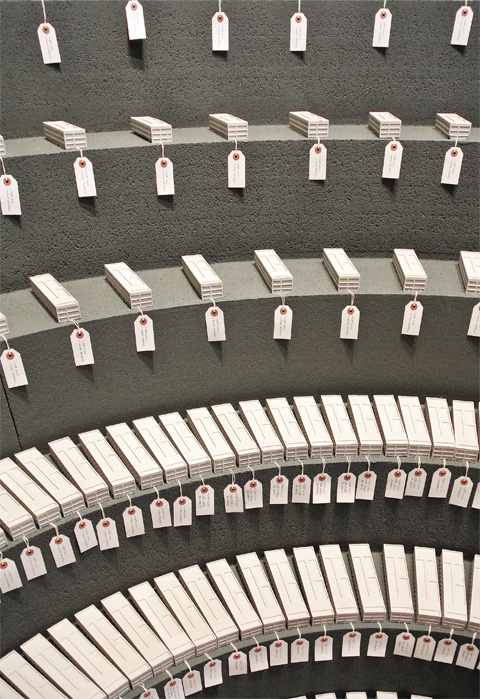 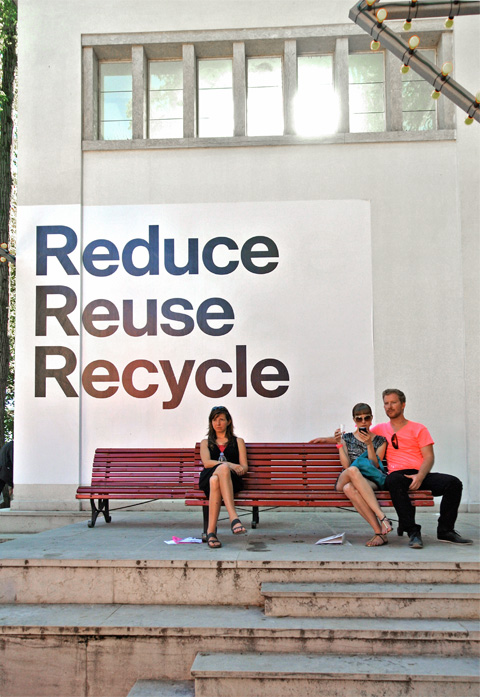 Triple “R“ for Germany: The German pavilion is committed to an avoiding kind of architecture, photo © Thomas Wagner, Stylepark 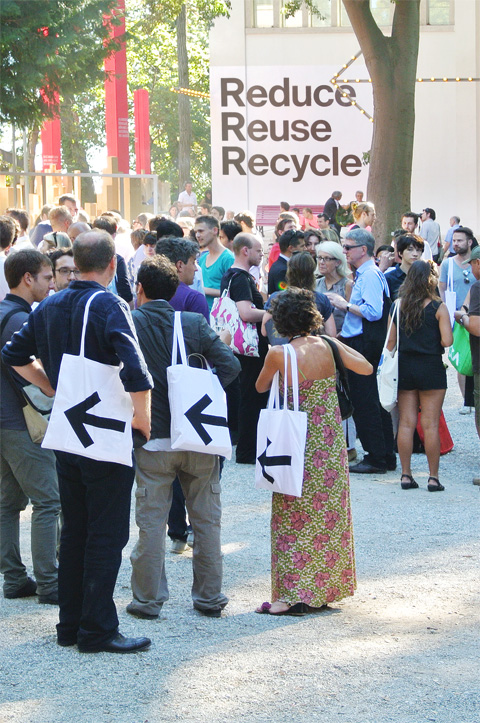 The bags from the German pavilion were quickly handed out to the visitors of the Giardini, photo © Thomas Wagner, Stylepark 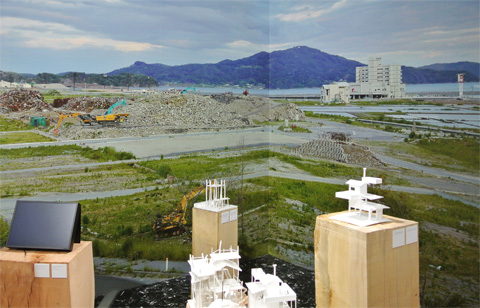 A new start for Japan: Kumiko Inui, Sou Fujimoto, Akihisa Hirata and Naoya Hatekayama were awarded with the Golden Lion for their project “Home-for-all” and the best pavilion at this year’s Biennale, photo © Thomas Wagner, Stylepark 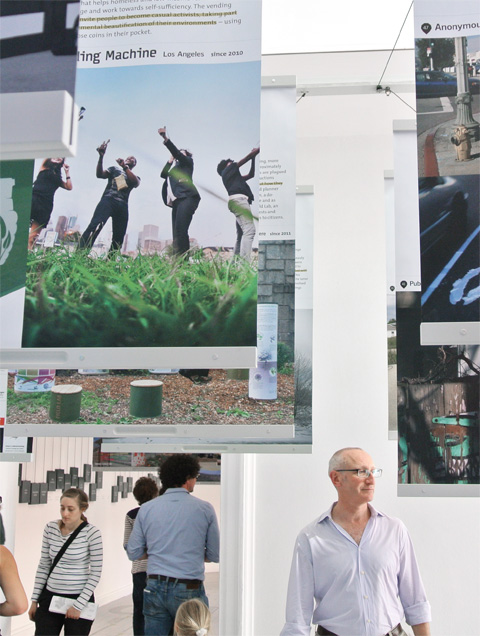 Of wedding chapels and chair bombing: The presented guerilla projects at the American pavilion demonstrate, how to achieve a maximum out of a low budget, photo © Thomas Wagner, Stylepark 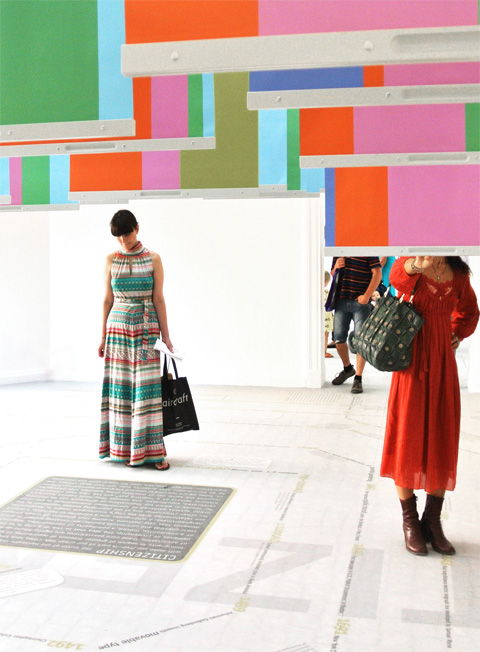