It is as if a giant spider had deposited its transparent mega-eggs in Hamburger Bahnhof and had used a maze of steel cabling to fasten the bizarre clutch to the iron beams and trusses of the classicist building as firmly as possible. In actual fact, it was installation artist Tomás Saraceno who was at work here, and he is someone you would expect to spin more than some instinctive realization of a naturally-given yarn. Taking as his title "Cloud Cities", the native Argentine sets out to no less than link the manifest intervention in urban space with his cloudy utopia of a future metropolis. Yet whereas he recently opted in the Marta Museum in Herford (in honor of the ingenious Buckminster Fuller, that "World Redesigner") to span his black steel mesh across a sea of houses taken from a classicist 19th century capital as a parallelogram of vectors that pointed into the future, here in Berlin in an all too ostentatious solo show there's not enough friction, a dearth of fruitful contradictions.

First of all, on show are all the "spheres" that Saraceno has conceived of and presented in recent years. And there are not a few of them, whereby the transparent air balloons are getting ever larger. Covered with plants such as the rootless tillandsia, which absorb nutrients from the air, these modules could form the basis for the cities in the clouds he seeks to dream up, were not each biotope then to grow rampant all on its own. This idyll in a former railroad station hall from the end of the 19th century was on show in similar form back in 2006 in Frankfurt's Portikus, a 21st-century white cube. So how do these repeat patterns fit into the "site-specific referentiality" that the artist pronounces his works possess, i.e., his specific approach to the respective venue?

This refers to something quite unlike the limited museum context, as Saraceno's works are also not intended as sculptures. This is clearly shown by some of the out-sized spherical skins that reach up as far as the ceiling and are anchored to the floor by sacks filled with water. These transparent spheres feature intermediate surfaces that function like a kind of bouncing castle. Anyone who steps out from the gangway onto the wobbly surface together with three or four other visitors (after having waited patiently in a queue) may be forgiven thinking they are on a trampoline. It is an urban lab, an experimental entity. "Each time you move, you also move the others," is how Saraceno explains the quasi-scientific configuration.

Pseudo-realist reconstructions of possible urban encounters are simply not suited to explore utopian living projects that certainly do not exist even as prototypes. On a Sunday afternoon the "Cloud Cities" tend to resemble more some fluffy place for nuclear families to spend their leisure time than a radically planned future project. Yet over and above this first trait of the museum show, the installation does beg the question whether and above all how in the domain of art a metropolis can be analytically represented, symbolically embodied or sensorily discerned.

There have been answers to this from Robert Venturi's postmodern ironic "Learning from Las Vegas" through to the digital nomadism of "Second Life. Tomas Saraceno misses quite a few things in his search for an, if not excessively new then at least eye-catching alternative, constrained in the narrows of metaphors for dirigibles and biosphere constructs. For example, his project lacks the complexity of urban indeed of social life per se. What his spherical light encounter rooms have that the computer simulations do not is the physical/sensory, corporeal aspect. That said, as regards diversity, the diversity of possible factors, influences and designs is completely lacking. Futurist rings-of-roses with three or four other bozos under the glass jar of the museum are definitely fundamentally unlike coexistence, like living, working or spending your leisure time together with tens or even hundreds of thousands in the projected cloud cities.

Above all, the colorless iridescent future cloud-ships exist in a strangely place-less form in Hamburger Bahnhof, they lack roots, some anchorage in history. Yet even the most daring of the utopians among us are but dwarves on the shoulders of giants. That is something that any visitor seeking more nourishing museum fodder after leaving the "Cloud Cities" and heading into the exhibition in the neighboring Rieck Halls, a newly arranged show drawing on the Friedrich Christian Flick Collection, soon realized: Glass places by Bruno Taut, the colonies in the air by Wenzel Hablik or the elegant record spans that Frei Otto achieved with his loadbearing structures - all dished up as fingerfood from the history of architecture in small cabinets. Before the main meals are served: Square, rectangular or even round volumes, combined to form abstract and to certain degree thus "architectural" ensembles. These formal foundations for possible urban structures are aseptic and sterile in the case of Donald Judd or Sol LeWitt, roughy and rustic in the case of Carl Andre's wooden blocks. And in the photo documentation by Gordon Matta-Clark we can clearly see how much every utopia relies on its opposite, the dystopia: A wrecking ball has crashed into grey tenement block facades like a lightning bolt, leaving a gaping hole through which even the largest of Tomas Saraceno's spheres would still fit. That is the somber, but necessary flipside as "without contradiction nothing gets revealed, no picture arises in a clear mirror if one side is not darkened." Jakob Böhme's insight would seem to have done the rounds; after all, it is more than 400 years old. 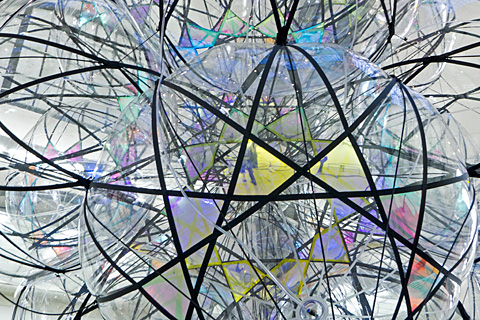 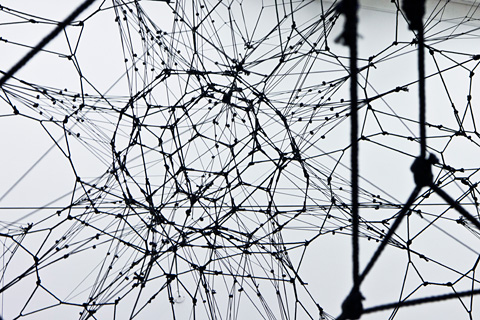 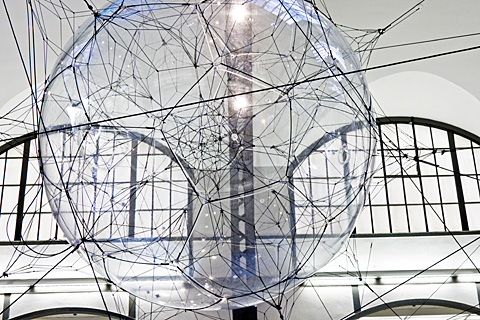 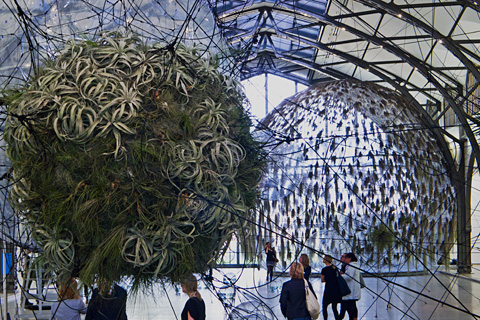 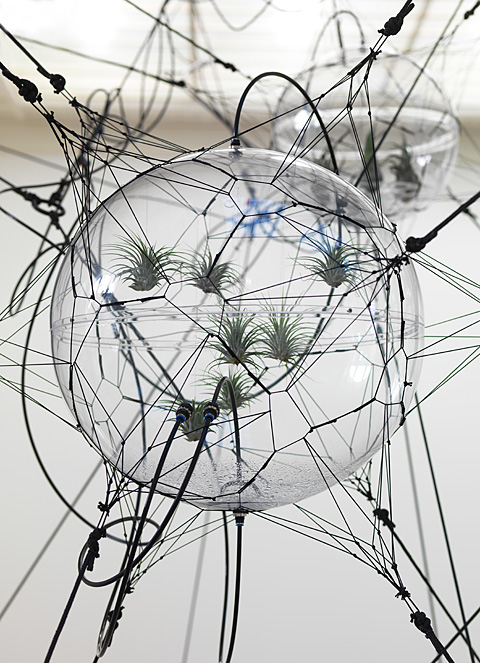 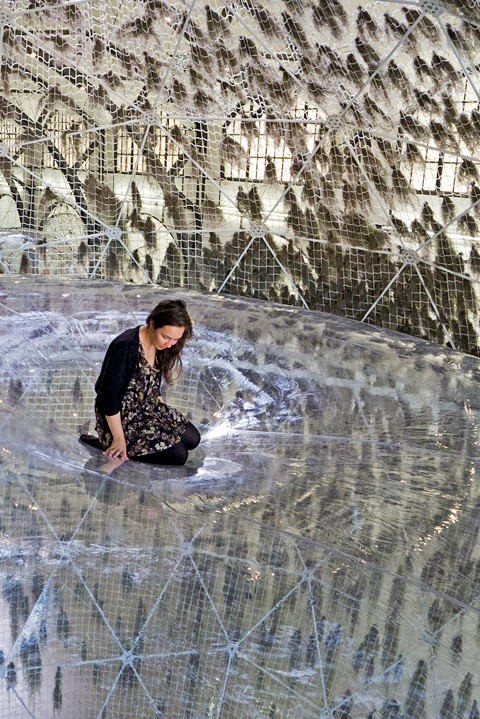 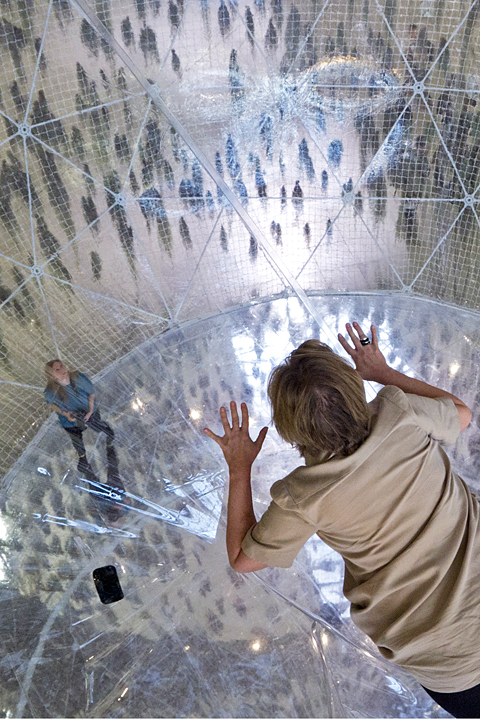 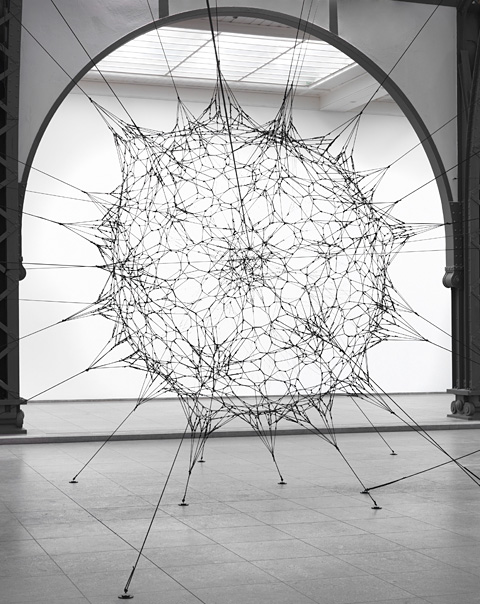 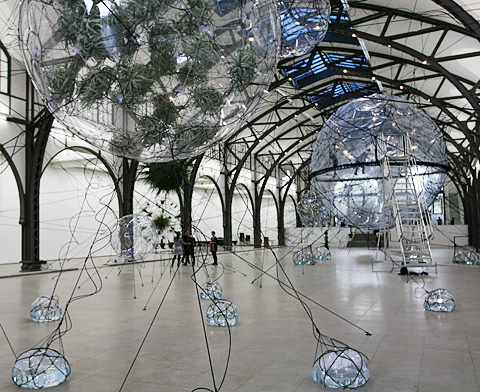 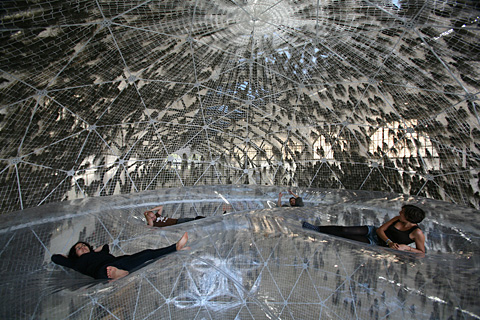 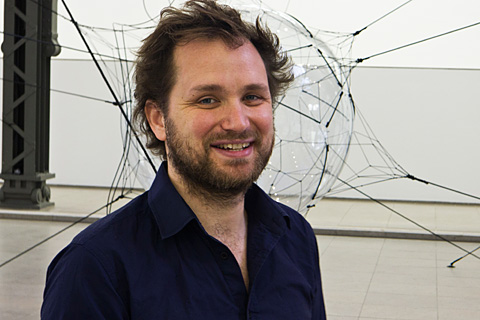