top
The Flood or Impressions from Wellness Zone 1
by Thomas Wagner | Mar 13, 2009 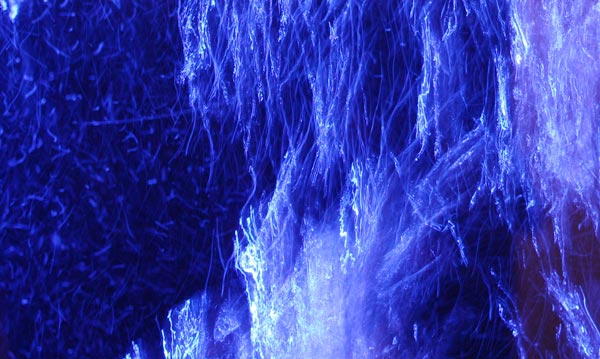 Let us not begin by talking about the fear of water that was common among the European aristocracy, even if this was in fact the reason why bathing was frowned upon in this country for such a long time. In this day and age, we love our baths lavish, luxurious and wet - even without servants to clean up the splash after us. However, our relationship with waters, foams and wellness bubbles is not quite as easy as new layout concepts and Green Design would have us believe. In the debate on how to find an ecological conscious design for the manifestly wasteful attitude towards water and energy, much of the ambivalence that historically related to waters both large and small still lives on albeit obscured by our immersion in the present.

Past and present demons Not only had the Greeks, known as a nation of seafarers, harboured feelings of fear and disgust for the sea, the fear of waters that come crashing down on people, portrayed for example in Albrecht Dürer's watercolour "Dream Face" (1525) or - even gorier - in the famous shower scene in Hitchcock's "Psycho", evokes nightmarish experiences in us. For all the positive connotations of water as a means of purification, atonement and re-birth, even Christianity views the sea as a home to sinister, man-eating demons. The Apocalypse of John actually describes how the earth will be liberated from the sea at the end of time, and why Columbus' crossing of the Atlantic could be interpreted as leading up to this liberation and as harbinger of the Second Appearance of Christ. In those days, this event was granted as much significance as the creation of the earth, and celebrated accordingly. Compared to such historical expectations of salvation, our modern, industrially tamed floods that flow down our bodies in pleasant streams or plummet into luxurious tubs in wide gushes, must seem rather lame. But even if our relationship with water is still affected by the faintest eschatological notion, it is predominantly feelings of ambivalence that prevail when encountering it. Even if the well-heated waters from the world of advertising help to evoke connotations of our desire for comfort, healing and the fantasies associated with it, the waters that come crashing down from above still provoke fears of Flood and drowning deep in our unconscious. The perfect image of the bath as a sphere of harmony and as a habitat is again haunted by demons from the past - but now it is scenarios of melting polar ice and the resulting rising sea levels as well as our fear of a possible energy breakdown. Admittedly, as soon as water flows from the tap in a controlled manner and there is talk of Blue Responsibility and Green Design, these feelings are immediately shifted into the positive.

Blessings in the wellness zones Even in times of crisis, naturally there can be no talk of shipwreck or the Flood at an international bathroom and sanitary trade fair. Instead, our longing for health, wellness and the blessings of the comfort zones in our dry and well-heated homes take centre stage. If we go by the elaborate slogans of an industry that is geared towards restoring our senses from floor to ceiling, we are certainly spoilt for choice. It may well be the case that soon we will need to choose our options for our average-size apartments: Do I want a kitchen, a living room or a bathroom? Or all in one? But one thing seems clear: Washing, bathing and relaxing are no longer seen as separate entities. Not only does the body cult promoted by the media (along with body shaping and beauty frenzy) have an effect on the water cult of our modern bathroom worlds, it also means that the modernist white cell that knew cleaning as its only function, has finally become a thing of the past. Now it is on the bathroom industry to present its latest creations, and the space that is filled with these wonderful worlds of contemporary cleaning and relaxing is constantly growing. Where there is an abundance of space and pleasure can be had from using our precious resource of water in moderation, a sense of well-being will naturally develop. It goes without saying that trade fairs such as the ISH firmly belong in the entrepreneurial showbiz - putting on a good show is part of the business. For that reason alone, modesty is out of the question for any of the large manufacturers, especially at a trade fair that seeks to undermine its own claim to grandeur by calling itself "World's Leading Trade Fair" for the "Bathroom Experience" as well as for "Building, Energy, Air-Conditioning and Renewable Energies". Even if at ISH, now in its 50th year, the majority of the 2,400 exhibitors have made the diminishing resources of water and energy the clear focus of their show and the German Sanitation Industry is running a campaign for sustainable living called "Blue Responsibility", the industry seems, apart from a few exceptions, to grapple with the task of closing the ever widening gap between expectations and reality, technology and design, sustainability and creativity. In addition to technical innovations, design is increasingly taking centre stage. However, the latter has not really come into its own yet, something that is shown by the fact that truly astonishing und innovative designs that merge aesthetics and ecological living into a convincing synthesis for the bathroom of the future are nowhere to be found. Instead, we are witnessing differentiation at quite a high level. Having said that, the looming crisis, and it is definitely more than just an economical crisis, will be quick to arrive.

Economical technology in attractive packaging In terms of technology itself, there is an abundant range of systems intended for saving energy, generating and recovering heat, reducing the amount of drinking water consumed and limiting the water consumption in taps. The amphoras from which the naiads used to dispense water in abundance, to give an example from the world of baths, have had their throughput limited long ago. The trade fair stand of the Dornbracht company boasts a large touch screen that displays the percentage by which water consumption in certain taps has been reduced in comparison to earlier models. Mostly invisible, innovations like these are necessary and important, even if the Blue Responsibility campaign will need to work hard on raising our awareness that we cannot place the responsibility for water and energy consumption solely in the hands of the manufacturers but that our behaviour as users is just as important. Running a tap for an entire day, even with a valve in place to reduce the flow, will certainly not help to save any water. More and over, the idea of a technologically designed water shortage can only be pushed so far, not only because the marketing industry still insists on alluring us with images of plenitude and luxurious abundance, but also because since ancient history it has always been flowing water to which cultures attributed a cleansing effect.

The field of aesthetics certainly views things from a different angle. As bathing is a sensuous experience in itself, naturally it is promoted. So why all these rather embarrassing attempts to clad stuffy, box-shaped bathtubs in luxurious woods or to jazz them up with coloured luminous strips known as LED stripes, to immerse shower cabins in coloured light or to illuminate shower heads and mixer taps in blue and red, depending on the temperature of the water? Useless gadgets such as these are certainly void of any design or modern aesthetics of relaxing, even if some star designers were not able to fully resist the temptations. Furthermore, design is often confused with decor -washbasins simply covered with images of the skylines of Shanghai or Berlin and marked "urban" are the result. This love affair with decorating has also spread to single lever taps - they now also come with a floral design. Still, the overall verdict is that there is a wide range of quality products to suit any purpose and any taste. The sheer variety is amazing - even if the stands and showcasing methods are surprisingly conventional. A tub will always be a tub, and a tap will always be a tap. Thus the pool of ingredients from which the novel is drawn finally turns out to be just as limited as the rituals that are used to obtain a sense of well-being.