top
The future’s just being tested in New York
von Znidaric Amelie | May 17, 2011

The bubble is an oft-used metaphor. It can be found in IT, finance and real estate, where it also quite often bursts, or quite generally in "reality", where it is considered a refuge for intellectuals and other musers. On May7, a bubble, quite literally, was placed in Sara D. Roosevelt Park on New York's Lower East side – called Spacebuster, it was created by Berlin architecture firm Raumlabor. Quite in keeping with the metaphor, intellectuals and musers convened there to debate the city's future.

Architects, engineers, writers, sociologists, anthropologists, and philosophers locked horns in discussions, while surrounded by a thin, semi-transparent membrane. It was to be expected that the car in its current state – combustion engine, metal bodywork, private transport – would not fare well. That three bold employees of the main sponsor Audi, however, were prepared to take part in the debate was certainly more of a surprise. The at times very abstract, intellectual jargon that formed these discussions was not always their territory, but it afforded them the opportunity to quietly focus on the company's core expertise and touch upon the practicability of the idea presented. What does "open source urbanism", an idea suggested by sociologist Saskia Sassen, mean in real terms on the ground? Out of the bubble and into reality, so to say.

There, the contributors would have found themselves in good company. For all the while the "Streetfest", a one-day street party as part of "Festival of Ideas for the New City", was going on around them. Over a hundred grassroots organizations and small businesses used Roosevelt Park and the nearby Bowery to raise their really quite every day concerns about the city. Activists from Bushwick Art Park, for example, wore colorful, knitted jumpsuits, sprawled out on knitted beds, read knitted books and ironed with a knitted iron, to express their feelings against fallow land in the Brooklyn neighborhood, Bushwick. There was much talk of recycling and sustainability, about renewable energy and alternative means of transport, about urban agriculture and organic farming. Outside the New Museum on the Bowery, the festival's sponsor, the "Silkworm", a kind of pink and turquoise tunnel tent, snaked its way through the street and housed street sellers as well as cooks selling their wares. Just a few steps from the Spacebuster, there were also worms – and real worms, at that. The initiative was called "Hug a Worm", according to which every New Yorker should have a small compost heap under their sink. After all, the city produces over 3,000 tons of organic waste each and every day.

The "Festival of Ideas for the New City" began three days earlier – with a conference and an address by architect Rem Koolhaas. He used the opportunity to address the topic of "preservation", the conservation and demolition of architecture – a surprise for the audience, as the speech was supposed to be about the city's future and not its history. "Heritage is our future," Koolhaas went on to claim. What the New Yorkers did not care too much for was that Koolhaas went onto the topic of recycling: a subject to which he actually devoted an entire exhibition at the Venice Architecture Biennial last summer. But for many, horrific rental prices in the city mean that long-distance travel is out of the question – this was also a hot topic at the festival.

At over a hundred other sites in Downtown Manhattan, there was also reflection on the city and its future; at a seven-hour Pecha Kuncha evening in a former school gym in Soho, for instance. Just a few buildings along, in the Openhouse Gallery, stood a 15 meter-high model of Manhattan. Stylepark curated "Project New York" as part of the "Audi Urban Future Initiative" together with Architizer, the New York architecture platform. Five young architecture companies were asked to contemplate what New York would look like in 2030 and put their visions together to create a large model in the entrance to the gallery. In just a few weeks, concepts such as Adaptive Zoning by Abruzzo Bodziak Architects had come to life. Here, the unused airspace over buildings is put to good use – instead of air, the renderings display photovoltaic arrays, which are placed just within the maximum building height on the buildings' roofs. By contrast, Leung Leung suggested suspending green canopies between buildings, providing a new habitat for birds and other wild animals. An interesting invention that inevitably brings one to consider nature's uncontrollability and thereby another pressing problem for New York: the rising sea level. In just 70 years Lower Manhattan could be submerged in water. Maybe Audi should dedicate some time to developing amphibian vehicles for New York. Or waterproof car-bubbles. 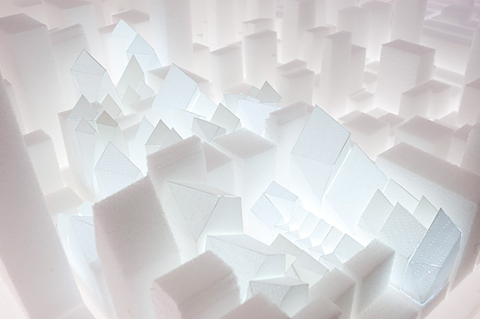 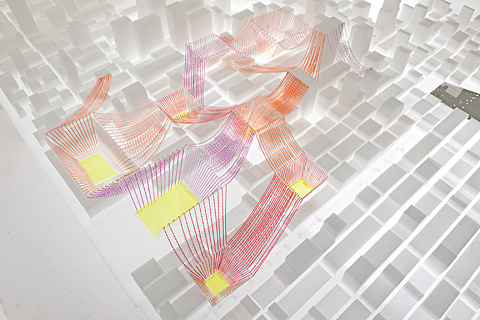 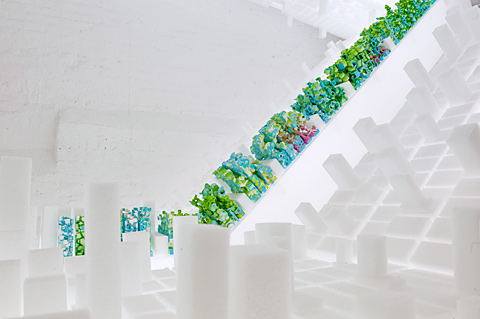 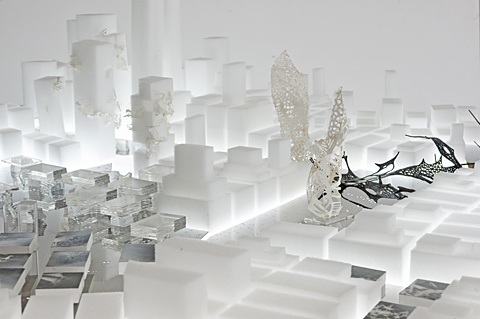 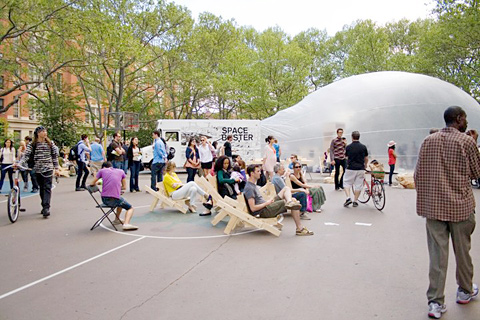 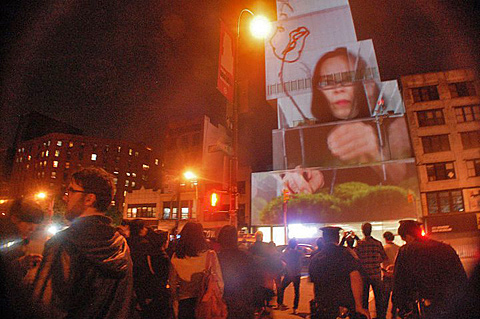 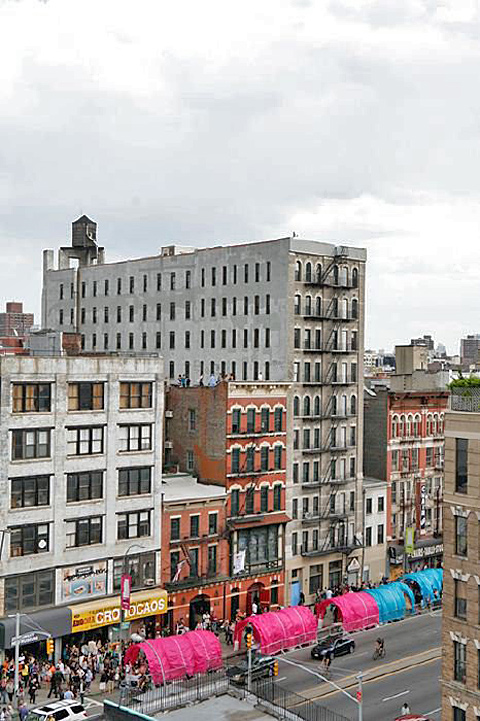 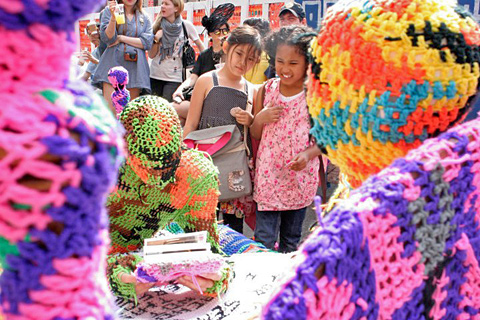 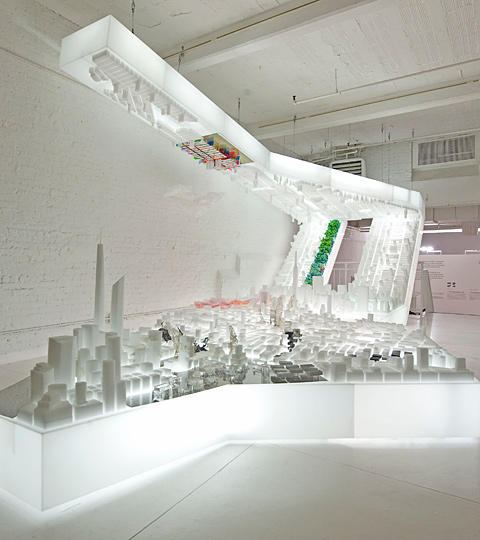 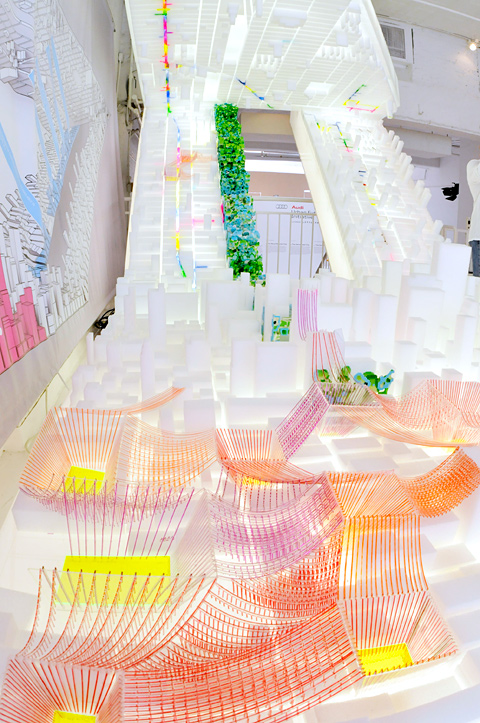 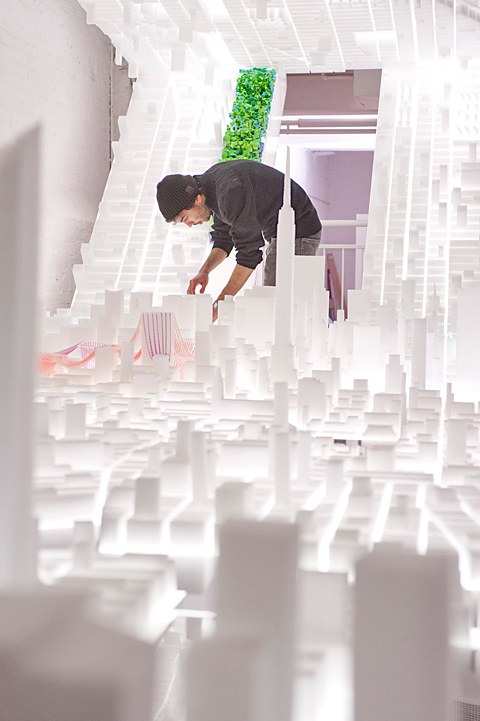 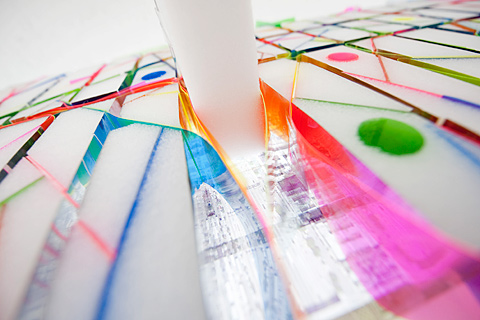 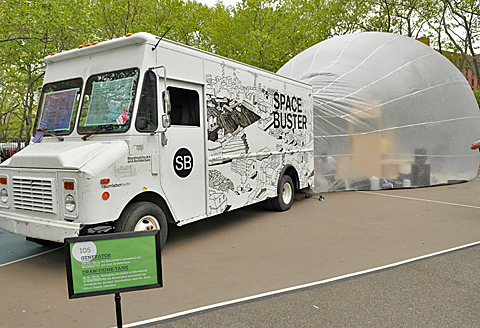 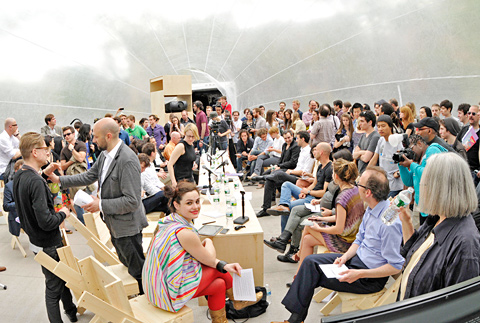 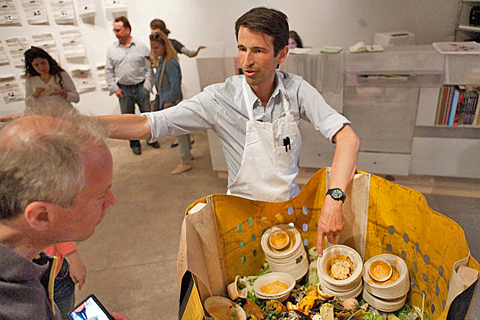 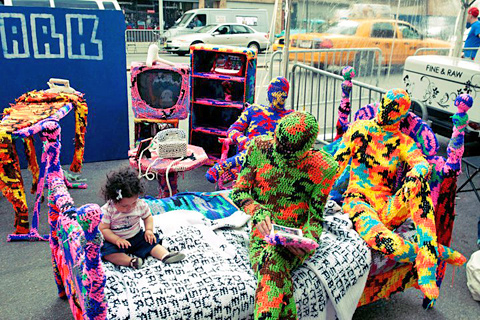