The omnipresent factories brought them into people's lives: metals, iron, steel! The materials of the industrial age were the materials of the design avant-garde in the early 20th century. They wanted to design the appropriate furniture, apartments and houses for a new age and new human beings. The Bauhaus designers fashioned the first tubular steel furniture from heating pipes and celebrated the "Metallic Party" in 1929 decked out with sheet metal and metal masks. Design as a discipline was accompanied by new materials. From the outset, transferring materials used in industry or for technical applications was one of its major driving forces. Designers also applied themselves to the appropriate processing and employment of materials, considering the natural coloring, the material's intrinsic logic and the appropriate use of material.

In the debates for and against functionalism in the late 1960s the new plastics must have represented a real coup, after all, they went against all the criteria that had been applied until then: They had no "natural" coloring, they were transparent and light and their use was not restricted by the size of a tree or the toughness of a metal. From their liquid to solid state plastics could presumably be formed into any shape desired. Just like metals a few decades earlier, plastics now marked the start of a new design era. Designers experimented with organic shapes and bright colors, questioned customary product shapes, designed hugely enlarged sections of lawn or columns made of foam as seating and developed future visions for living in rooms completely lined with plastic cushions or made of plastic elements. The part the new plastics played in inventing new social and living forms in the 1960s cannot be estimated highly enough.

Imitation as the starting point for new home designs

That said, at this time plastics could already look back on a development history over a hundred years old: As early as the 19th century industry experimented with new plastics some of which were extracted from natural raw materials and satisfied with industrially manufactured products the higher demand for consumer goods. In historicism early duroplasts were mostly used as replacements for precious materials such as mother-of-pearl and tortoiseshell and consequently led to the image of a cheap culture of plastics. The fully-synthetic plastic Bakelite the new materials established themselves as independent materials with special properties. Nonetheless, they played a subordinate role for the creative avant-garde of the 1920s and 1930s. It was only through the intensive advancement of numerous synthetic materials during World War II that plastics experienced a new development impetus, which was also reflected in civilian life after the war. When in 1946 Earl S. Tupper developed Tupperware from polyethylene, soft plastics first made their entry into households. The triumphal march of plastics that allowed mass demand to be met rationally and inexpensively was no longer to be halted. A new world opened up for designers.

As early as the 1940s Charles and Ray Eames were experimenting with fiberglass-reinforced polyester for their shell chairs; their work numbers amongst the most famous early design experiments using plastic. In the 1950s innumerable designers conceived shapes that could be realized with the new materials: Saarinen's Tulip-Chair (1956), Arne Jacobsen's organically shaped chairs Egg and Swan. But the "functionalists" at the Ulm Design School also revolutionized entire product categories using plastic: The famous Snow White's Coffin (Phonosuper SK4) by Braun, which Hans Gugelot and Dieter Rams designed in 1956, featured a transparent Plexiglas lid permitting a view of the operating controls, which were previously concealed in heavy, wooden hi-fi cabinets. The eagerness to experiment and enthusiasm for the future marking the 1960s produced visions of things disappearing and innumerable design classics of plastic: Creations such as Eero Arnio's "Ball Chair", Gaetano Pesce's "UP", Joe Colombo's "Tubo" furniture, the "Capitello" armchair by Studio 65 or the "Pratone" furniture by Strum. Inflatable and transparent furniture like the Blow chair by De Pas, D'Urbino and Lomazzi came close to Marcel Breuer's utopia of "sitting on a column of air". And naturally Verner Panton is known for the innovative use of plastic. With his famous fantasy landscape for the "Visiona 2" exhibition he caused a stir at the Cologne Furniture Fair in 1970. His famous "Panton" Chair was one of the first cantilever chairs to be made entirely of plastic. The design has long become a design classic whose desire to impress absurdly is not rated any differently by most people than a design classic by Mies van der Rohe or Le Corbusier.

The fluctuating value of plastics

Since the oil crisis in the 1970s and the onset of the environmental movement "plastics" have also meant alienation from a natural materiality. They stood for a throwaway mentality, a blind belief in progress. Plastics, which for a while had been deemed progressive and revolutionary were out of fashion. The creative experiment with plastic was continued by groups such as Memphis and Alchimia, but it was not until the early 1990s that plastics were also reappraised in the mass market: For example through the designs for household products by Authentics, which appeared translucent and matt creating a totally new aesthetics that contrasted with the tough, shiny plastics of the1970s. Plastics gained equal status to other materials, and no longer sought to compete with traditional materials. Many designs are characterized by a playful approach to the material plastic, no longer seeing its employment as a break with what is familiar but rather resort to archetypal shapes. For the first time, products made entirely of plastic could be seen as manifesting the creative endeavor for simplicity and naturalness.

In particular the new design of their surfaces lent them a contemporary value. Precisely the surface seems in plastics - more than in any other material - to fluctuate permanently between matte and glossy: The glossy plastics of the 1960s were soon seen as cheap. Designs such as the Braun Sixtant shaver by Hans Gugelot and Gerd A. Müller (1961/62) with its matte etched surface and the Lamy 2000 fountain pen in which in 1966 Gerd A. Müller employed the same material and surface appearance achieved a higher value through the matt finish. The glossy plastic furniture of the 1970s was followed by the matt black designs of the 1980s and the translucent, matt plastic products of the 1990s.The iMacs and iPods by Apple recently saw the return of glossy plastic as a high quality surface, a look that is currently spreading to all plastic products and whose end is already in sight. Favored surfaces typical of a certain period and changing the material used can completely alter a design: The matte Panton Chair for example altered its appearance completely thanks to the use of different materials: Light is either not reflected on matte polypropylene or it produces scattered light reflection making the material seem thicker and the overall shape more solid than in the glossy versions. He is no longer an elegant, provocative-progressive dining room chair but rather comes across like a sturdy garden chair, which however only allows for a few scratches on its matte surface.

For a while plastics were not seen as suitable materials for high-quality design; for a long time designers sought to avoid using plastic where possible or to conceal it from sight. It was not until the 1990s that designers adopted a more impartial attitude towards plastics per se and used them once again to conceive contemporary product designs: Philippe Starck's chair design for Kartell, the shelf Bookworm (1994) by Ron Arad, the plastic elements "Algues" (2004) by the Bouroullec brothers. With the "Myto" chair presented 2008 Konstantin Grcic developed a new interpretation of the plastic cantilever, which was likewise possible thanks to a new material. A younger designer generation experiments just as naturally with traditional materials associated with craftsmanship as with newly discovered high-tech plastics. Charles and Ray Eames once experimented with glass fiber reinforced plastics, today Konstantin Grcic experiments with Hirek plastic while Patricia Urquiola favors transparent polymers in a bid to achieve totally new shapes, surface qualities, application areas or uses that make design not only the formal but also technological manifestation of our age capable of altering people's lives.

The article is the abridged version of an article that is twice as long and that will soon be published in the accompanying book to a Stylepark Material Edition devoted to plastic. 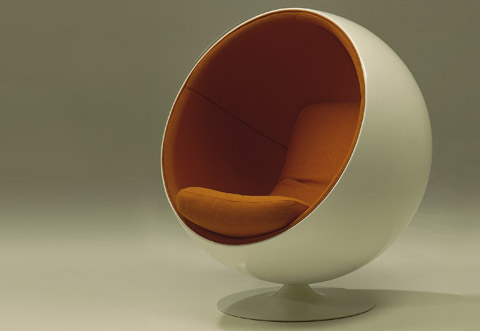 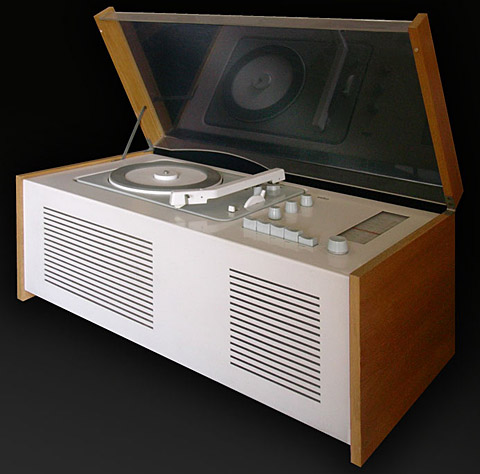 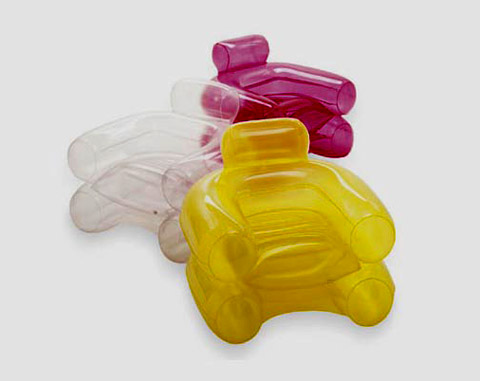 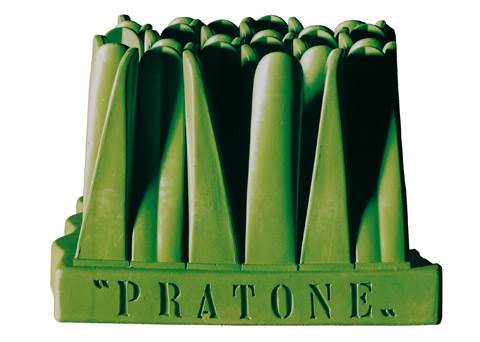 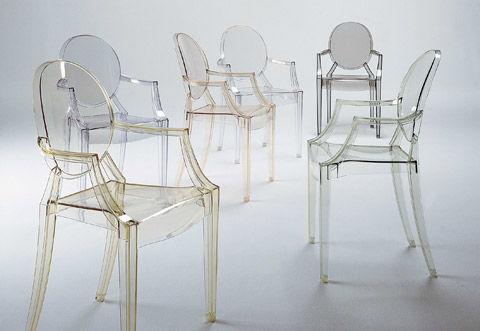 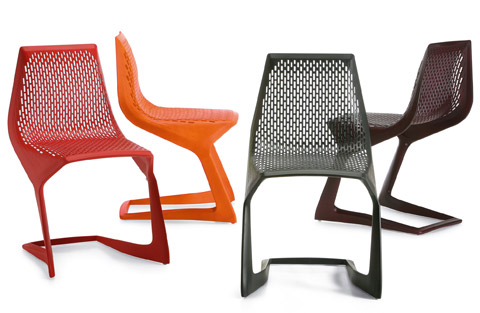 Myto by Konstantin Grcic for Plank 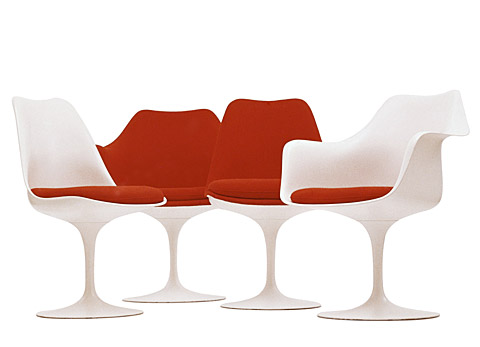 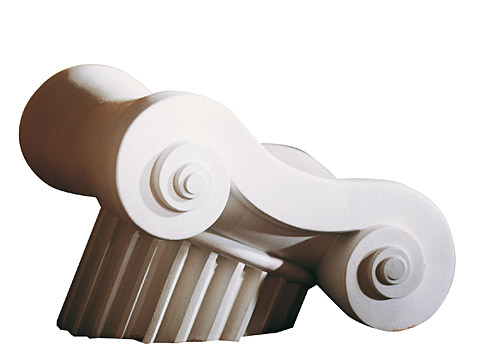 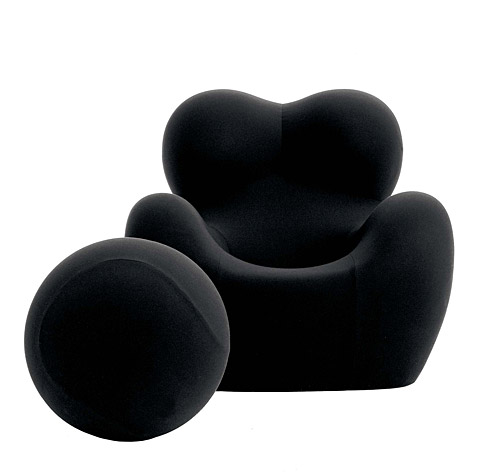 UP by Gaetano Pesce 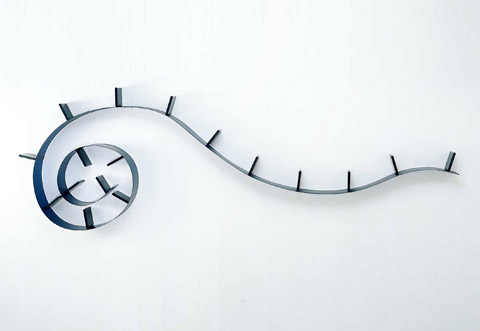 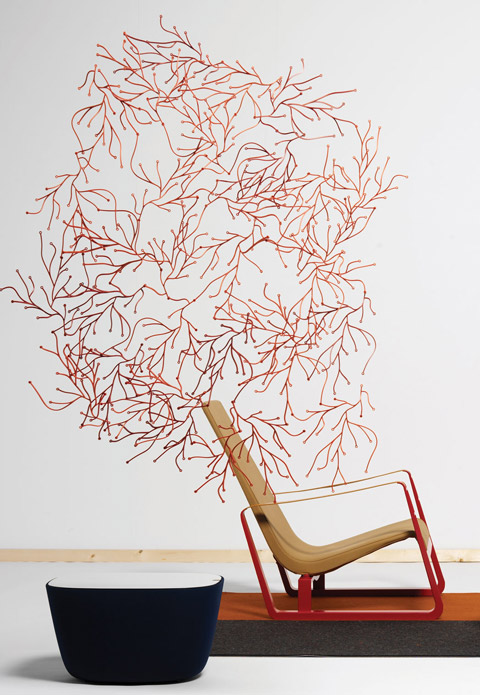