It is not only children that enjoy sledding - adults too are attracted to the slopes. However, the latter's assaults on the summit usually coincide with a visit of a mountain inn. We head up the top in the early afternoon, eat and drink plenty before we ride down to the valley in the dark. While the daring among us see it as a competition, others simply enjoy a relaxed ride down the hill. Depending on the sled, the riding style - and the degree of drunkenness - the one or other accident may occur: Some get stuck in a snow drift; others do not manage to get around a bend and end up in the deep powder snow. The winter landscape with its snow-covered trees, the clear, crisp air and the almost surreal-looking bright starry sky will delight any sledder, whatever their sledding skills.

Obviously, it is also possible to sled down a hill on a plastic bag. Sleds, bobs, tires and airboards, however, offer far more elegant ways to return to the foot of the mountain. Depending on the shape, material and size of the device, the travel speed will range from virtual standstill (when the sled keeps on getting stuck in the snow because of rusty runners) to highway speed (airboards can reach a speed of more than one hundred kilometers per hour). Currently, we mostly get to see sleds made of wood, plastic, tubular steel or aluminum on the slopes. When choosing the device, criteria such as sliding performance, directional stability and braking options must be taken into consideration. Some models can be transported and easily stored thanks to their minimalistic design or integrated folding mechanisms.

We all know the good old "wooden Davos sledge" that today is one of the most widely used models. In the 19th century, a predecessor model was imported from Norway to Switzerland where it was further refined. It was then used in its present form during a sled race in Davos in 1883. Today, the long-established Sirch company based in the Allgäu region produces first-rate Davos sleds that are optionally made of layer-glued beech or steam-curved ash.

Lovers of design will of course be intrigued by the illustrations of the historic Thonet slides made of bentwood and manufactured more than one hundred years ago, but no longer produced. Nowadays, Thonet produces a sled model made of bent steel tubing. The "S 333" features two parallel runners that bend up into a seat across which mesh fabric is stretched. The cantilever frame counteracts any unevenness on the slope. For transport, the sled can be easily slung across the shoulders like a backpack.

Car manufacturers such as BMW, Mercedes Benz and Volkswagen too have looked into sled manufacturing in recent years. After all, when it comes to exclusive accessories they know precisely what they owe their customers. From a design point of view we are particularly impressed with "Rodel" created by Porsche Design Studio and produced by Swiss Rodel. Inspired by professional bobsleds, this model is made of black plastic and consists of a seat with five lateral openings that sits on two steeply inclined runners. The model's longitudinal curve improves maneuverability, while thanks to the angular position of the runners only the outer edges touch the floor, providing greater directional stability as a result.

As early as in 2003, Konstantin Grcic declared the traditional sled as good as dead. According to Grcic, the clear and simple rules of trades and crafts simply felt outdated in times that cherished such a diversity of interpretations. The traditional wooden sled as it was used in the 15th century in Valle d`Aosta in northern Italy inspired Grcic to design a sled in the shape of a hoop with nine handles. "...my sledge no longer fits a set of rules, it is no longer made from wood, nor is it designed to run head down," Grcic comments. "The new sledge is inflated and round. It's out of control and dangerous!"

Airboarders, too, speed down the hills on inflatable machines, but in a much more controlled way than Grcic's model would allow. On the air cushions invented by the Swiss Joe Steiner sledders lie on their stomach head down and hold on to the handles. The ribbed underside of the board makes it stay on track, while the low center of gravity increases the speed; the sledder brakes by shifting the airboard sideways and in case of an accident the board protects the user like an airbag.

We may rest also assured: Sleds are anything but dead. Designers and engineers have been and will be working not only on pneumatic inflatable tires and airboards, but they also keep inventing new sled designs. "Alurunner" by Hans Deiseroth and Thomas Breen is but one example. Consisting of an aluminum frame with a plastic seat, it has suspension forks and a claw brake like a mountain bike.

Yet even if sleds are becoming increasingly more sporty, enabling ever higher traveling speeds, they are still perfectly suitable for an evening trip to a nearby alpine hut. The mountains are calling! Yet sometimes we get back to the valley a lot faster than we intended. 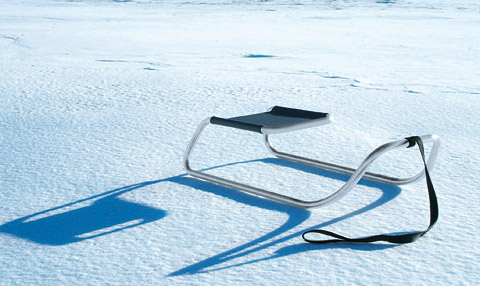 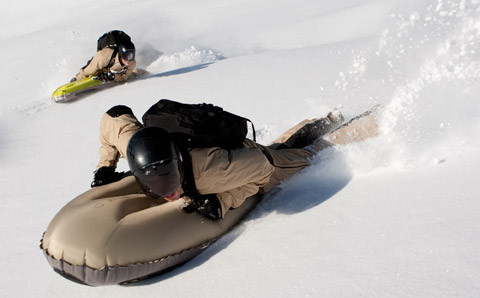 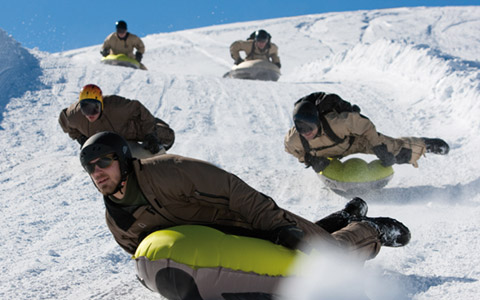 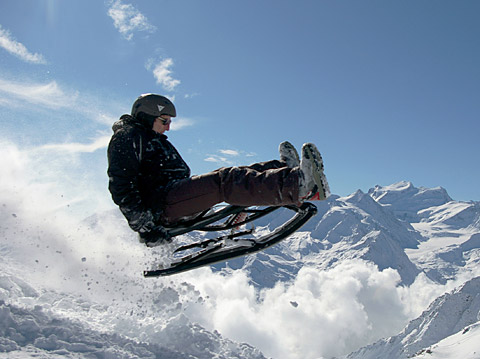 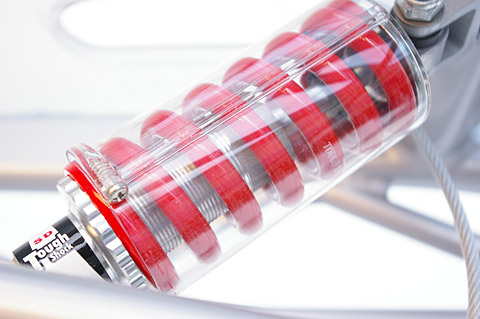 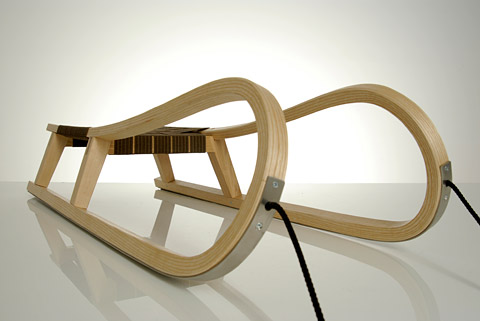 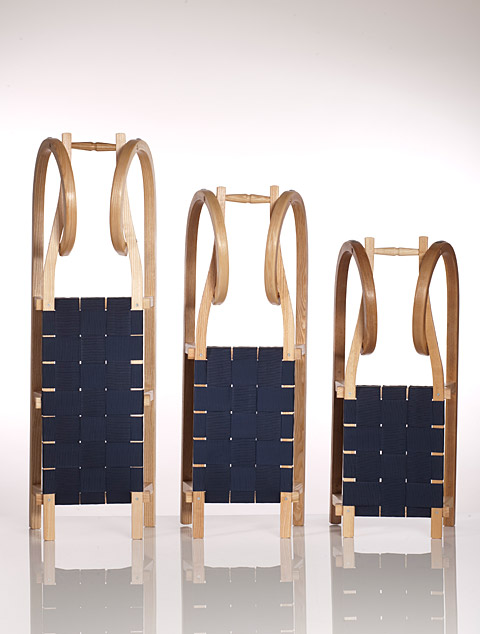 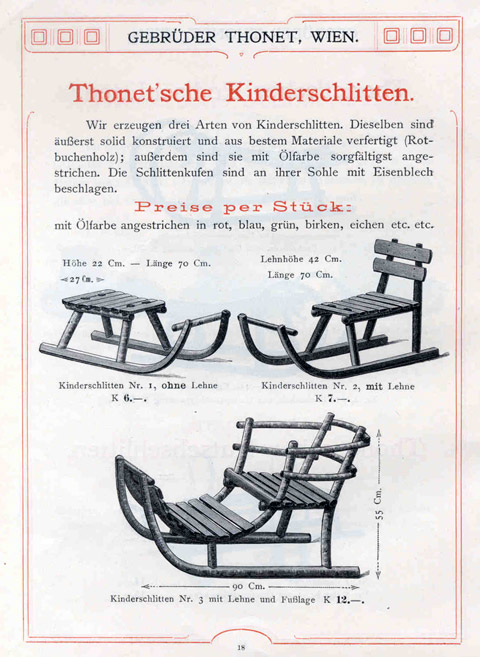 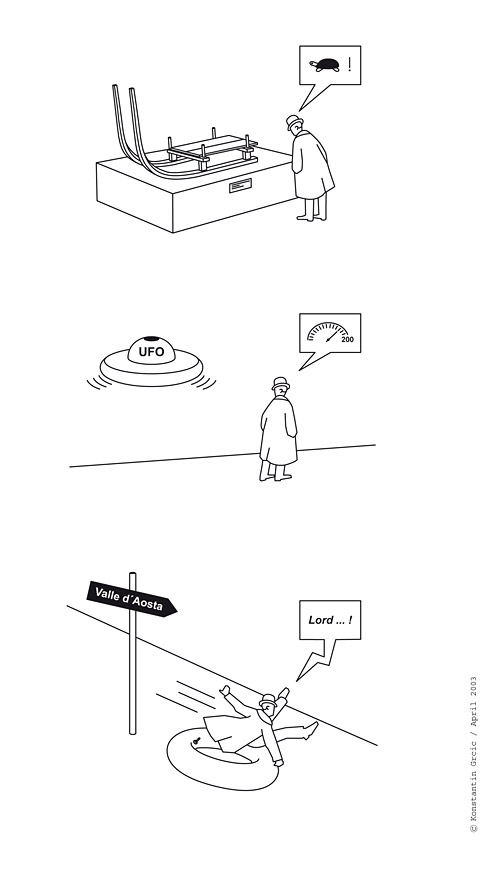 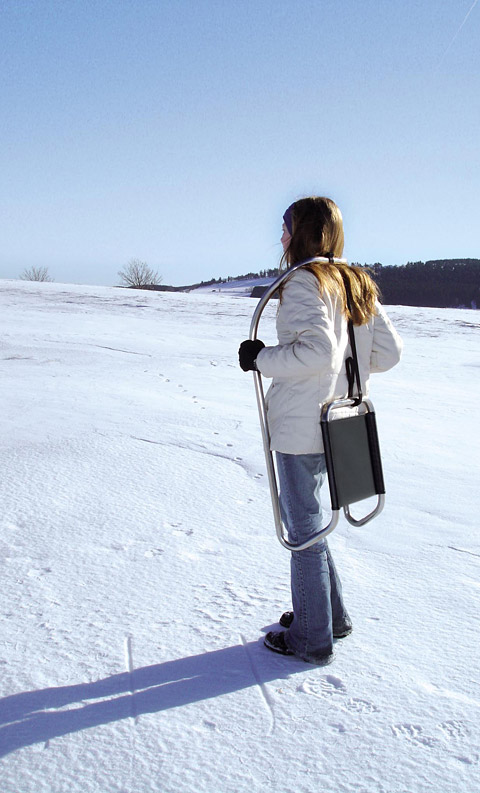 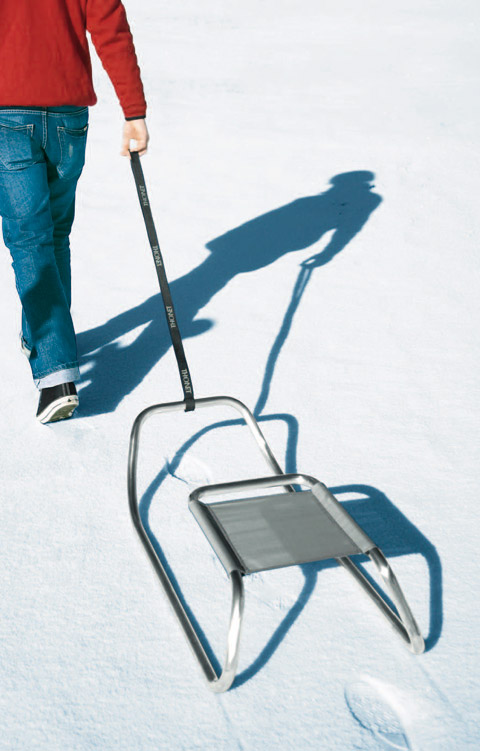 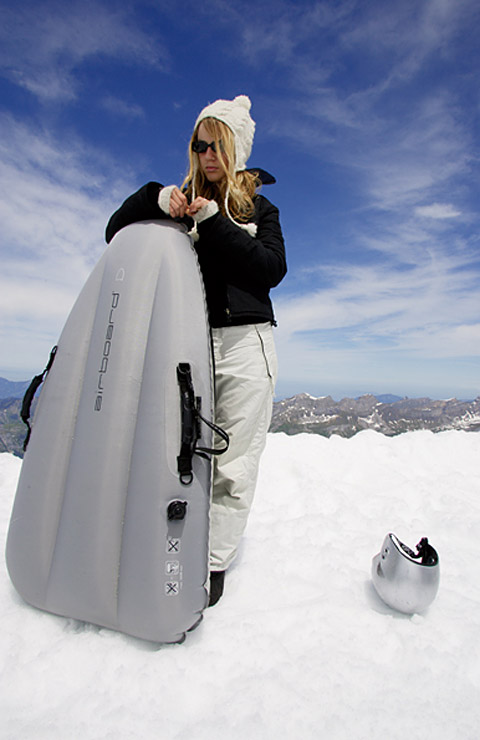 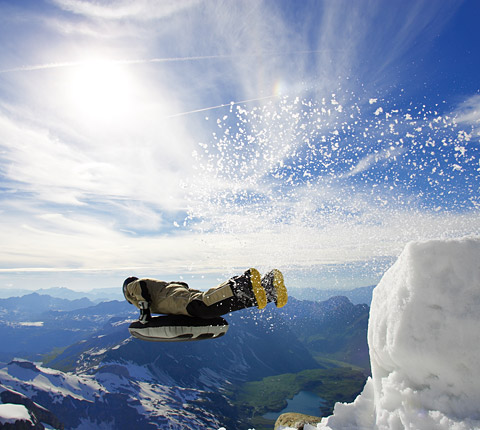 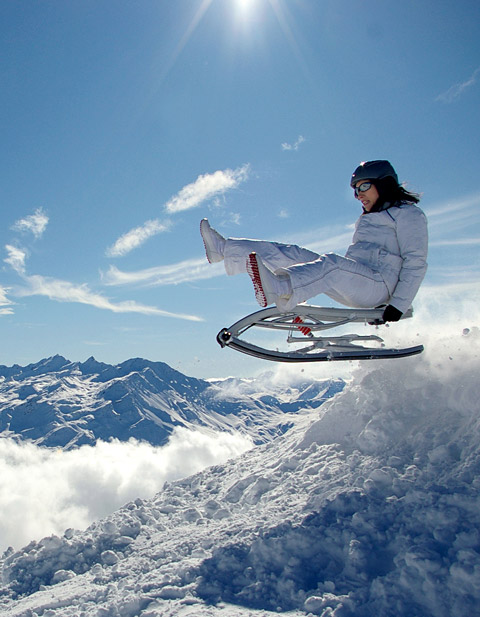 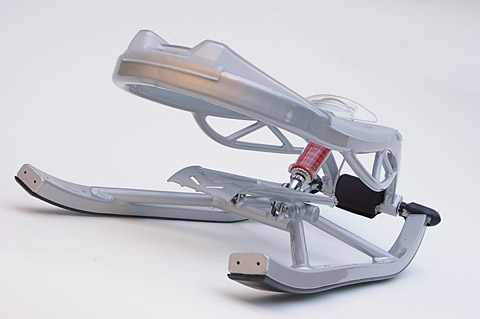 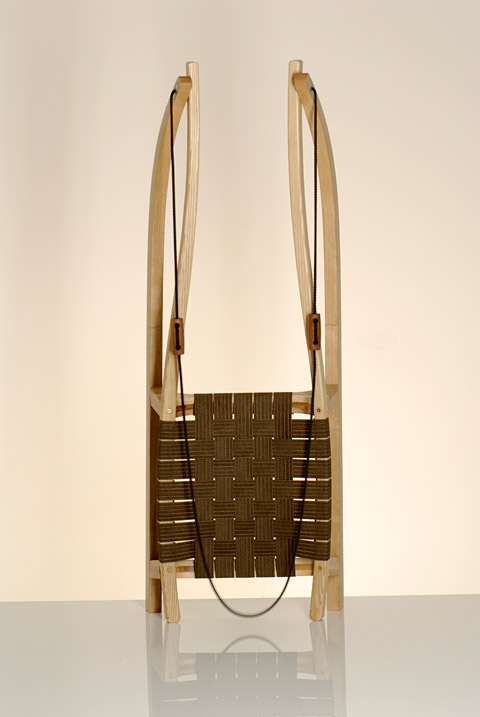 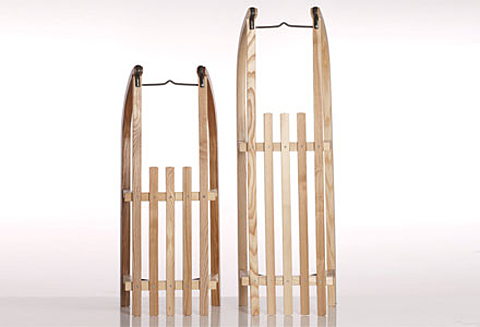 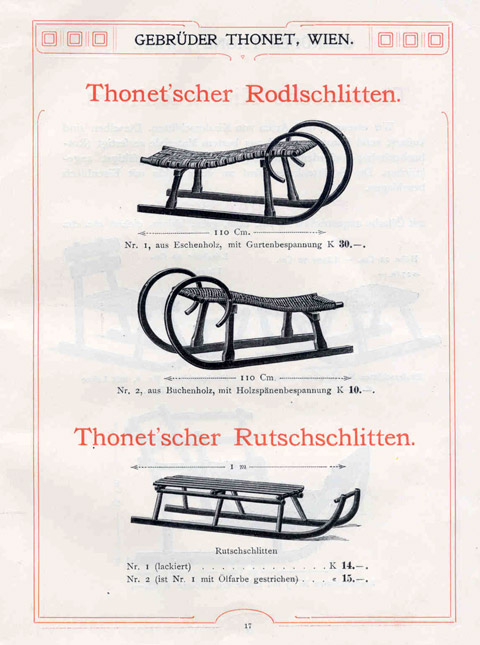 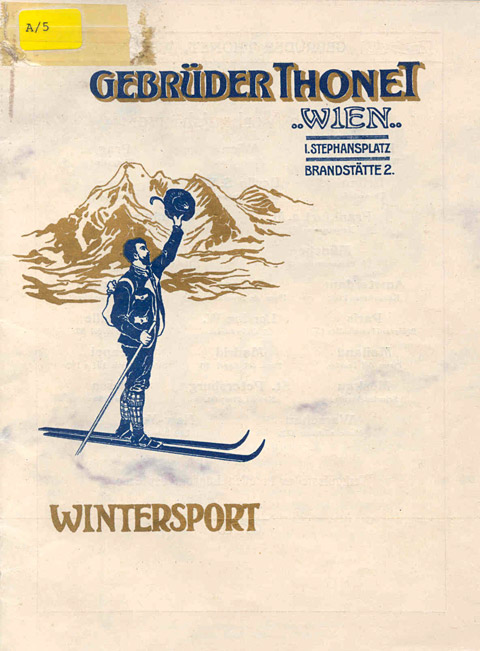 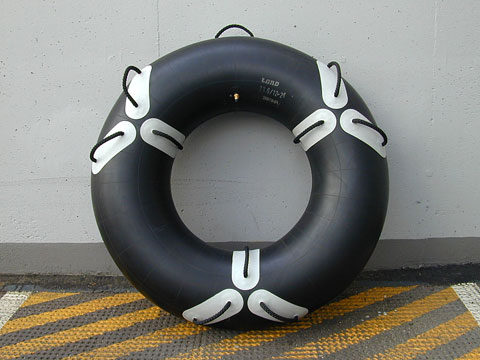