Trade fairs are a wondrous and wonderful matter. A unique cosmos of give and take, a traditional world of products, be they big or small, colorful or matter-of-fact. In fact, the one or other item is potentially obscure or unnecessary, desired or yearned for, has long gone unnoticed or even surprising. A throng of people who develop and present these goods, along with those who note the bestsellers and novelties down on their order lists, delighted but with hard business sense. All of them experts, like those who look critically at things, ask twice, and who seek to be find in the flood of images and information an insight worth talking about. As trade fairs are markets, and "markets are conversations" – that we have known at the latest since 1999 when the "Cluetrain Manifesto" came out. In markets, manufacturers, dealers, users, critics, observers, and consumers all converse with one another. Information gets spread, thoughts floated that then mature into ideas, which in turn develop a momentum of their own and at times return forcefully as products to the place the thought was first aired. That's the way it's been for centuries, so why should things be different at the imm 2012 in Cologne?

"The Italians are back" was a piece of news heard uttered joyfully at the Cologne furniture fair. A sigh of relief across the board. And indeed, the big hitters such as Cassina, B&B Italia, Moroso, Kartell were back in town and their presence attested to the imm's importance on the international trade-fair circuit. Not that the Italians had brought many real novelties with them, merely product variants. The launch of Italian innovations evidently remains reserved for the Salone Internationale in Milan.

That said, companies using Cologne as a platform to showcase their new products can really score big-time, as does manufacturer Ligne Roset. The expansion of its fresh product line is moving ineluctably forward, with the sure hand of Michel Roset at the helm. The firm now has 40 designers under contract, and 60 new products make a visit to its booth an enjoyable affair. The idea of immediately taking young and highly promising designers under contract who have just bagged their first awards or won competitions (such as the imm's very own "D3 Contest") is certainly smart. Thus, the "Bidum" designs by Laetitia Florin, an elastic container made of steel strips covered with fabric, and the "Olive" and "Peye" luminaires by designer trio Numéro 111 are already in the new range. For their "Picnic" side-table, Italo-Danish duo Stine Gam and Enrico Fratesi have given that old picnic basket a few forked legs. And Pierre Paulin's "Élysee" line, a re-interpretation of the seating designed in 1971 for the paintings salon in the private rooms of Georges and Claude Pompidou in Élysée Palace in Paris now boasts not only a sofa but also an armchair and a pouf.

Product development at Walter Knoll focuses on the search for "archetypes". "Tobu", a round oak table, reveals Asian influences with its heavy-weight central column, that in visual terms seems so light. And with a revolving Lazy Susan on top, hospitality emulates Far Eastern practices. The "Bao" armchair, designed by Vienna's Eoos, is visually reminiscent of a symbiosis of a larger seat shell from von Arne Jacobsen "3107" with a round pouf, and its combination of leather on the backrest and upholstery on the seat is certainly persuasive. It's a combination that other manufacturers go for, too. For example, Swiss leather specialist de Sede, who displayed Hugo de Ruiter's "DS 167" sofa in a fresh mix of leather and fabric. Team by Wellis presents "Monolit", a triangular sideboard system that at first glance challenges us to question its utility, but on closer inspection it's truly charming. In fact, "Monolit" gives a room a little less open a structure and corners don't seem as cluttered as they would if rectangular modular furniture were used.

Cor's "Bahir" seems to have been chipped from a single block, and Jörg Boner says it's "definitely not furniture for nomads". The Swiss designer suggests it's meant to "make the sofa more of a bed" but not "to define it as a place, but as a landscape". The unusual depth and geometric lines that arise simply from the workmanship structure the broad surface of the seat – the upholstery cushions can simply be unzipped and cleaned. That's so very Swiss: practical and delighted if there are synergies, as at Cor, which "contributes real production know-how to the collaboration."

On occasion, the Swiss search for common ground and with the brand name "Swissness" makers Hersteller Baltensweiler, Création Baumann, Lehni, Röthlisberger Kollektion, Thut Möbel and Wogg opted for a joint booth in Cologne, which Jörg Boner they divided into zones using red palisades. Probably a good idea: giving clear Swiss design a strong showing together, but the presentation could have been better. Mark Werder at Wogg ("I tend to work more as a gallerist for furniture" had a couple of examples of Swiss patience at hand. The chair "Wogg 42" wasn't initially understood by most, but has now been well-received by the market. He is justly proud when he points to the elaborate photo production for the product launch six years ago. Cutting-edge photos, as Flötotto has just chosen for "Pro", the school chair created by Konstantin Grcic. Somehow the Swiss area always out in front. Even if different type of marketing are involved. Baltensweiler has brought out the "Typ 600" luminaire in a strictly limited edition; since the product's 60th jubilee in 2011 it has been marketed one by one at a very high-end price.

Without much ado, Cologne designer Eric Degenhardt is pressing ahead with things. He made the "Gentle" table for Böwer. The top stands out for its thinner edge, its core has a linoleum or veneer lipping applied in a vacuum process. The forked legs emphasize the design's lightness.

Things look sturdier at Richard Lampert, who presented a new collection including outdoor furniture in Cologne. Eric Degenhardt has contributed a table called "Hook", circular, folding, and evidently ready to be hung up. Thanks to the large metal eyelet, which doubles up as a handle, the powder-coated sheet-steel side-table can be hung on a wall to save space till it's time for the next BBQ. The firm's "Mash" folding chair refers the Robert Altmann's satirical anti-war movie. Its appearance is strongly influenced by the folding mechanism – here, designer Alexander Seifried takes his cue from everyday US design. Things only get really comfortable with the "Tie-Break" armchair, which incorporates mesh resembling a tennis net in its seat and backrest. On warm summer evenings you can sit back in it and relax, irrespective of whether you played a match beforehand or not.

Stefan Diez's "Tropez" sofa for Gandia Blasco was inspired, he says, by the "sports world of the 1920s and 1930s". First to be glimpsed as a prototype in a back yard in Milan last April we now see it as an outdoor item that takes indoor comforts out into the world.

Austria's Team 7 crucially focuses on the sustainability of the materials they use when developing a product. The "S1" chair uses Austrian and German heart beechwood. The clearly shaped design with the inserted backrest looks very modern and fresh especially in the leather-upholstered version.

Italian manufacturer Kristalia has proudly won the Interior Innovation Award this year with its "Elephant wood" chair masterminded by Eva Paster and Michael Geldmacher. We can look forward to its stackable "Compas" chair. In Cologne, a highly promising prototype of Patrick Norguet's design was on display. The seat and backrest are made of polypropylene, while the legs are die-cast aluminum with a weatherproof powder coating. The materials make it ideal for both indoor and outdoor use.

Schönbuch this year has very gently brought colors into play. The "Flare" floorboard line by Scholten & Baijings constitutes light lines of color when used as a print on the fronts of cupboards, wall cupboards and sideboards made of powder-coated sheet steel. A typical piece by the Dutch duo. The "Pick" wardrobe hook is a five-part set of tubes of different lengths and with different color dots – here designer Simon Bredt has dreamed up more visual emphasis for entrance areas.

If more proof is needed that rocking chairs have long since ceased to be something for fuddy-duddies, then Montis' "Dim Sum" offers it. British designer Simon Pengelly has chosen a formal idiom that at first sight shows a broad, low-lying armchair with an elongated backrest. Only on closer inspection do you note the wooden runners. Judging by the number of satisfied looking test rockers at Design Post, Montis has landed a biggie with "Dim Sum".

Yes, there was much to be discovered, ordered, tried out in Cologne. Ergo: the market place on the Rhine functions well. With great routine, novelties, dedication. Consolidation is well underway. Which can surely not mean that people should rest on their laurels. Innovations are by definition only new for a limited period and thus interesting. This applies to makers as it does to trailblazers. Ideas for 2013 are already being floated and we are already interested to see what the results will be. 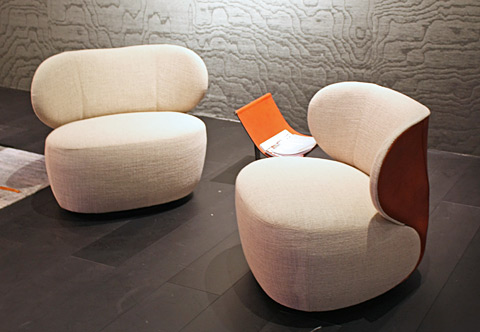 According to Walter Knoll Eoos has created an “archetype” with the armchair “Bao“, photo © Dimitrios Tsatsas, Stylepark 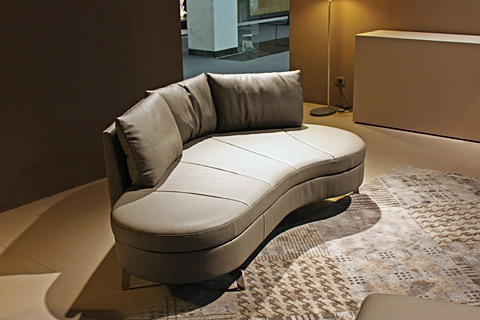 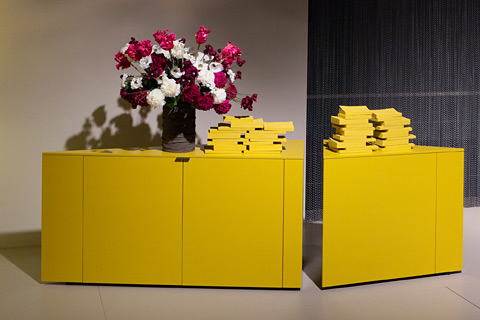 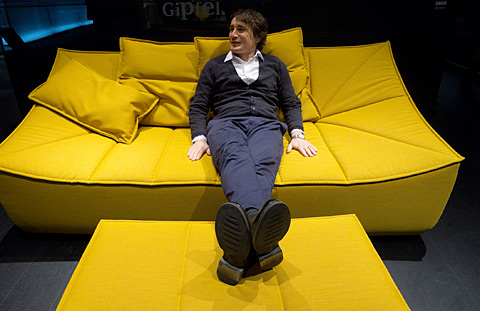 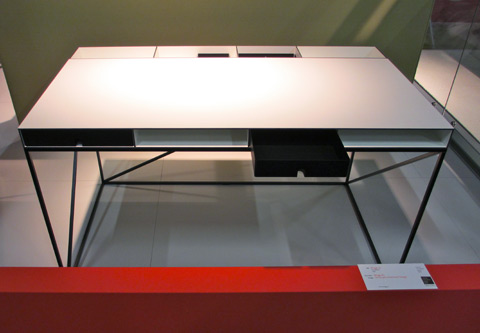 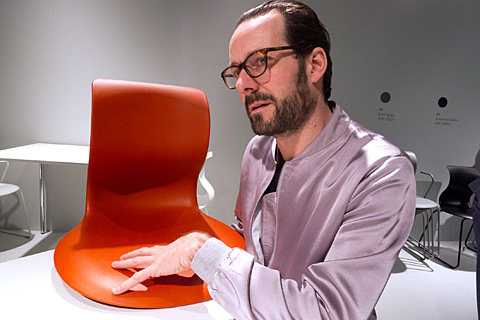 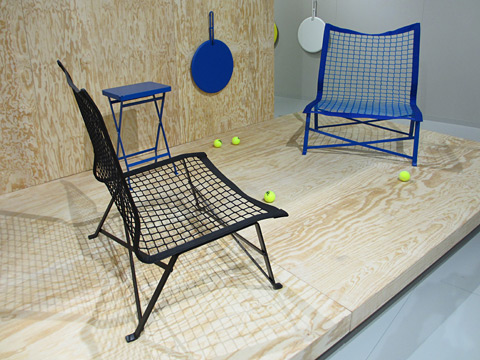 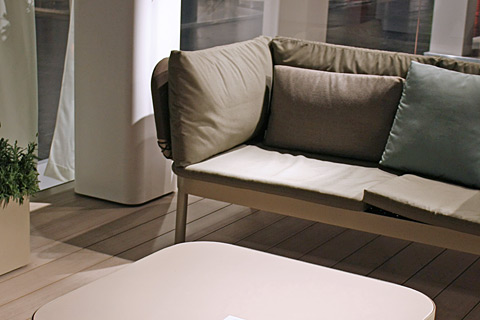 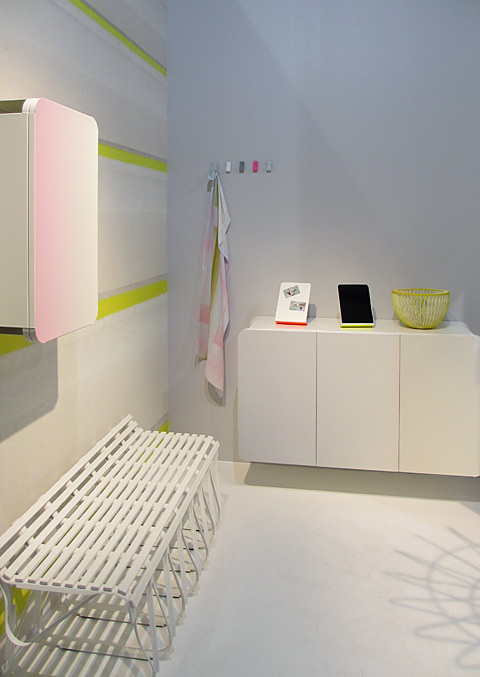 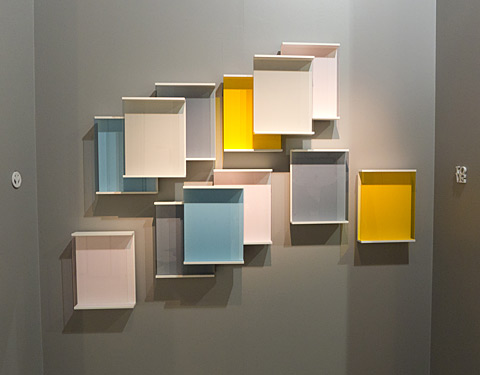 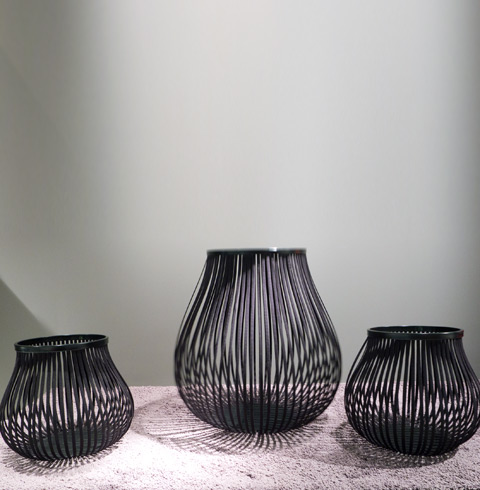 “Bidum“ by Laetitia Florin at Ligne Roset is an elastic basket with steel-straps coated with textiles, photo © Jörg Zimmermann, Stylepark 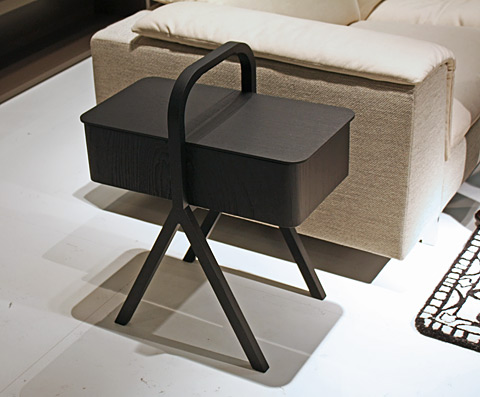 The side-table “Picnic“ was designed by the duo Stine Gam and Enrico Fratesi for Ligne Roset”, photo © Dimitrios Tsatsas, Stylepark 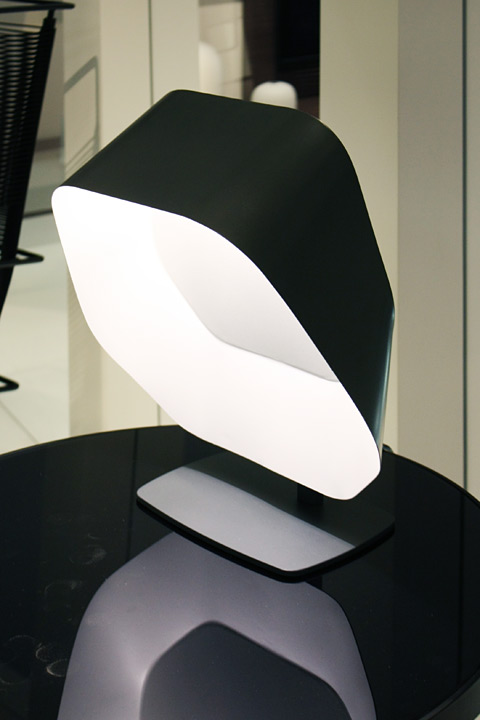 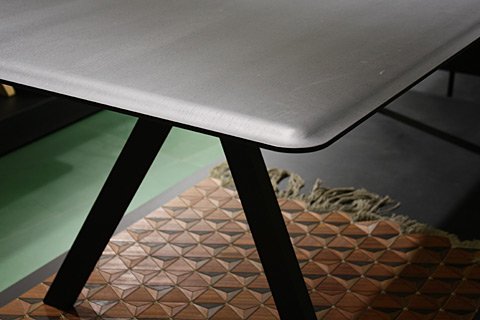 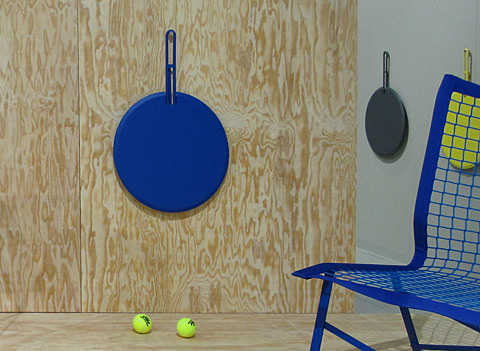 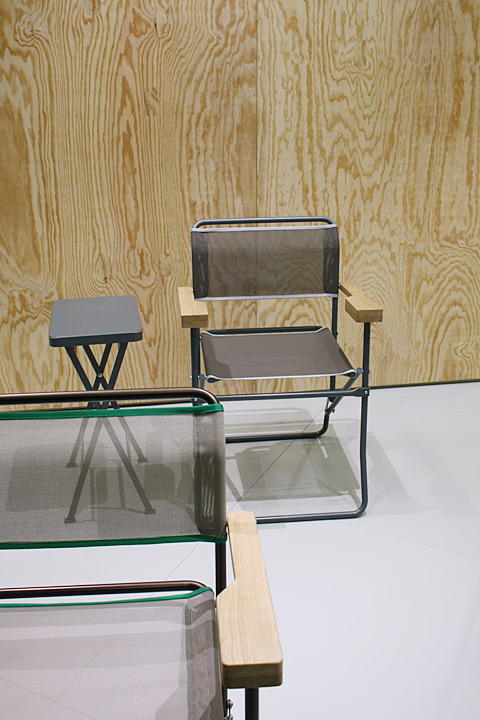 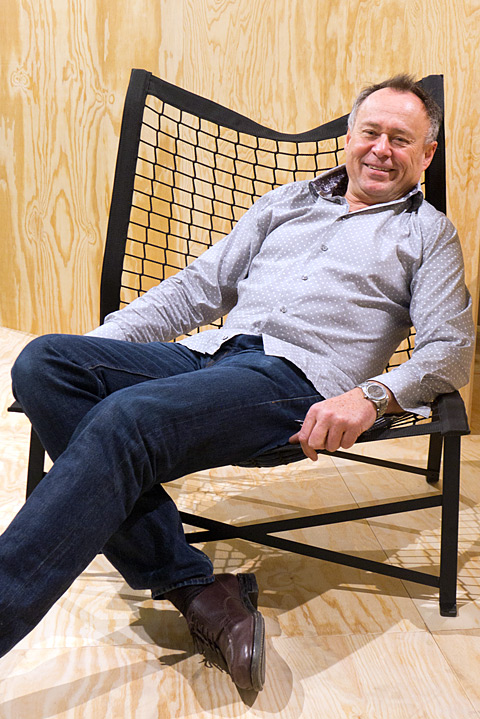 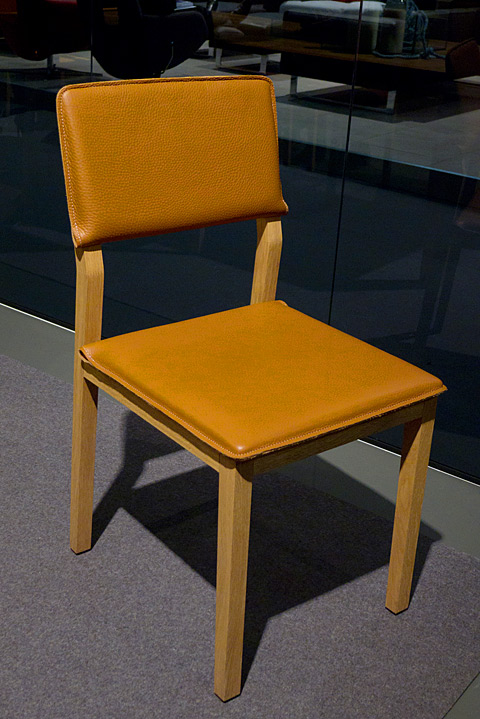 During the development of the chair “S1” by Team 7 designer Jacob Strobel the focus was put on the sustainability of material and production, photo © Jörg Zimmermann, Stylepark 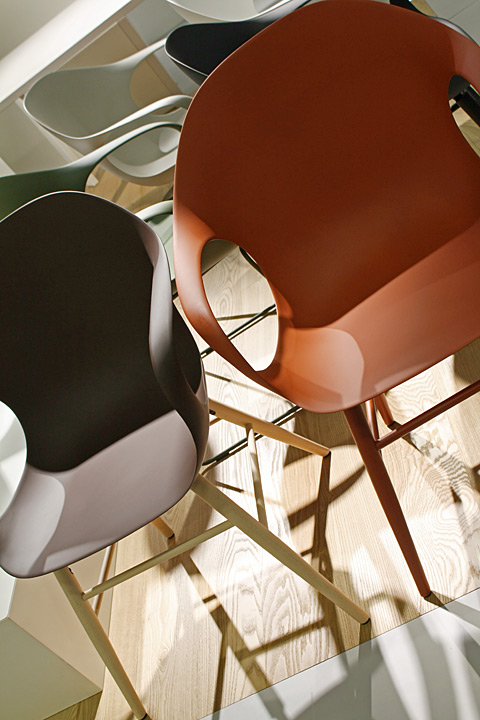 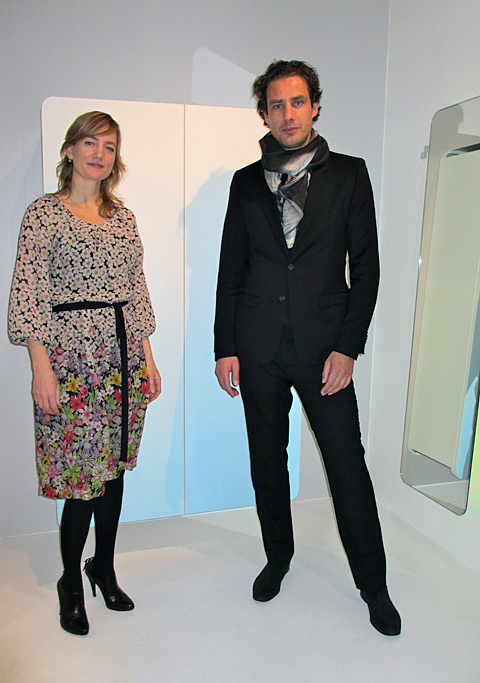 Fresh wind for the category of rocking chairs: With „Dim Sum“ of the British designer Simon Pengelly the manufacturer Montis seems to have shown a lucky hand, photo © Jörg Zimmermann, Stylepark 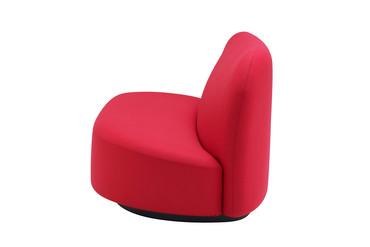 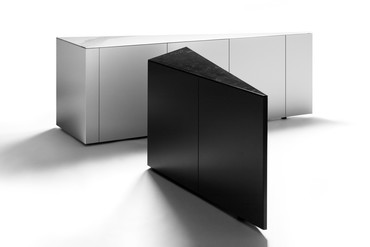 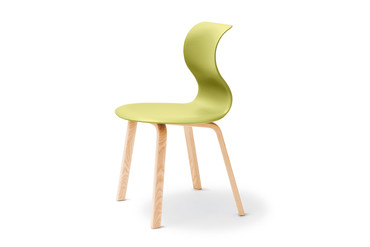 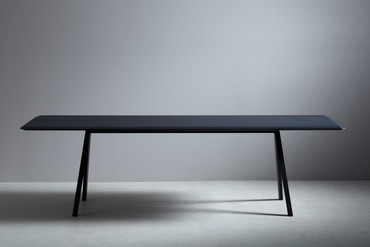 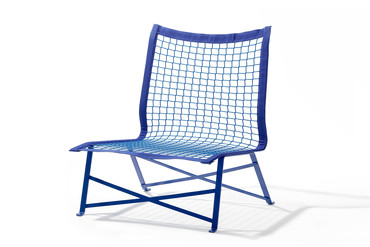 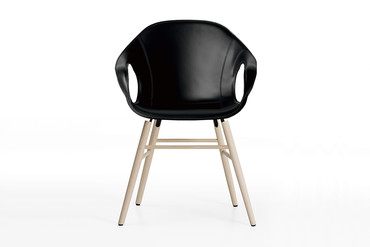 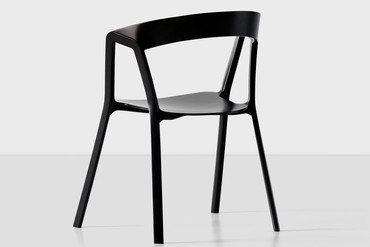 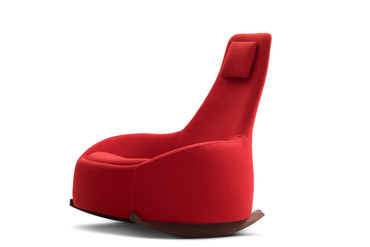 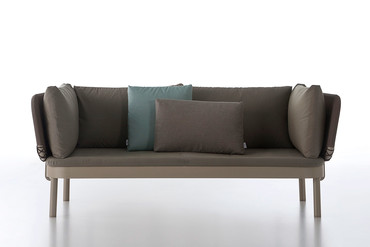