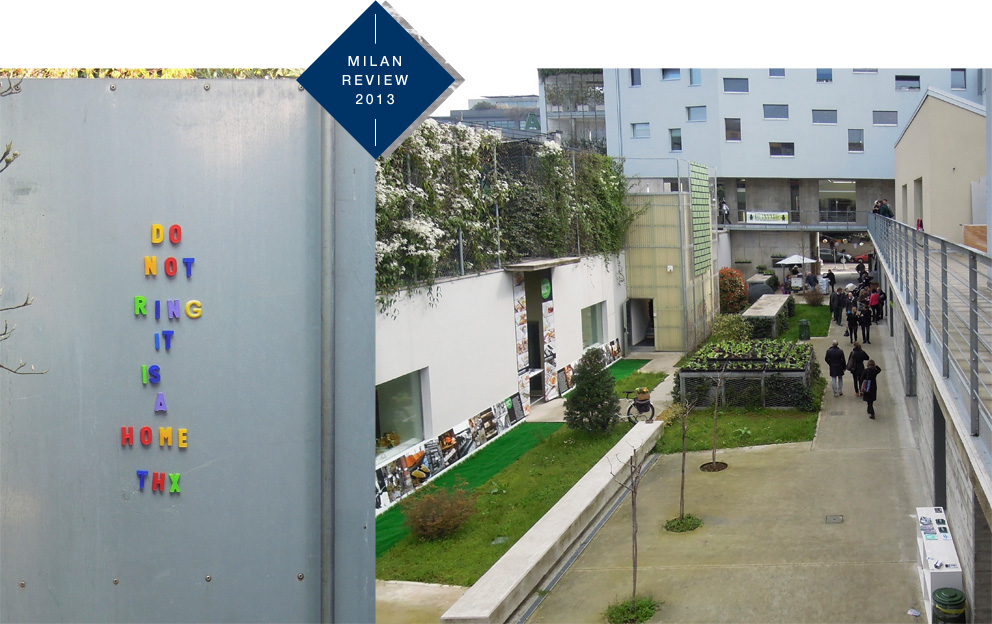 Anyone heading for Lambrate should take plenty of time along with them. It’s not the route to the district located northeast of downtown Milan that is so arduous, and the distances between the individual locations can be covered by shuttle for the footsore and back-weary. No, it’s the exhibitions themselves that are time-traps. Because this year alongside sustainability the other main theme was the process of design. For example, Eindhoven-based Italian Andrea Brena was proudly ensconced between the little carpets he had crocheted and embroidered by hand or by arm from textile industry offcuts, and, while chatting with interested visitors, was busy making another design, stitch by stitch. Students from the Royal Academy of Art in The Hague were manhandling plaster, filling it in liquid form into a kind of fabric bag which they then pulled up close to the high ceiling of the industrial hall where they braided the colored ribbons hanging from it as if dancing round a May pole. What the actual end product was? No idea? Didn’t have the time to wait around and see…

Lambrate finally came to light as a design district, thanks to the two Dutch initiators Margriet Vollenberg and Margo Konings who consciously worked toward creating a counterpoint to the mainstream show. They wanted to expand the notion of design beyond that of the established trade fair and above all as an alternative to the Zona Tortona, where many years ago there had also been a sense of the new, of an inventive spirit – something that had since slipped away to the factory halls in northeast Milan. It’s the students, start-ups and young designers who prefer Lambrate, primarily for financial reasons. Between 2010 and 2012 the number of exhibitors at Lambrate has as good as doubled each year, with the 2013 figure up almost 50 percent on the prior year. There are now 135 exhibitors spread across a space of 10,000 square meters. Lambrate’s success in this respect is proof enough that Milan needs somewhere related to the fair where the next generation of designers can cameo their wares. And in-between them you’ll repeatedly come across more renowned labels, who choose Lambrate for image reasons. Or perhaps out of economic necessity?

Established & Sons, for years the big hitter in Brera, the brand with the greatest sex appeal, the aura of a label with an ex-Beatles’ father-in-law and hippest party – this year it opted for a very modest abode on Via Ventura. What was spaciously draped across many square meters at La Pelota does not really come into its own here, even if what we see are the selfsame articles by the likes of Sebastian Wrong, Zaha Hadid and Amanda Levete; it’s as if a quiet voice was trying to say: “Hey, we’re still part of things!”

Back to crafts and design: the artistic crafts tradition innate in good Nordic design played first fiddle in the Mindcraft13 exhibition of Danish crafts. Christian Flindt presents a table that combines a frame made of fiber-reinforced concrete with a thin ash veneer. Søren Ulrik Petersen exhibits a wooden shelf that can be turned into a coffin – without even a single element being superfluous. Matthias Bengtsson gives his bronze “Growth Chair” pride of place: it simulates natural growth and in doing so emulates nature’s rules and methods.

Nature and sustainability seem to be the key motifs in the work of all these young designers. For example, Israel’s Adital Ela has devised a stool called “Terra”; it’s an organic product made of earth and natural fibers, which she molded by means of compression. A designer, a doctor, an architect, an economist and a farmer all teamed up on a modern farm project in Bologna: Bulbo has developed the “Cynara” and “Quadra” LED luminaire models that deliver light on a spectrum that enables you to grow your own herbs, vegetables and lettuce at home in your kitchen, quite irrespective of the season or the sunlight. For the “Altered Appliances” project, students at Rotterdam’s Piet Zwart Institute concerned themselves with edible alternatives to customary paper or plastic cups and plates: they’ve used dough that has been dyed or decorated with patterns to create one-off bowls that can be composted. Too much eco, too little design? The fact is our planet’s resources are limited and new plastic furniture à la Kartell does not point the way forward. This insight is evidently now part of the curriculum at the academies.

Not that this stops people from playing around: The students at Denmark’s Kolding School of Design chose containers as their stage. And the idea presented by Carl Emil Jacobsen, who clad the available space entirely in blue carpet, was definitely highly original. On it he printed white lines – the outline of the furniture items that you could then fold out from the walls. He certainly managed to undermine our perception of carpets as two-dimensional beings. Nina Kosonen, a student at Finland’s Aalto University, designed a constructivist beechwood chair that she simply slots together – when not in use it can be tucked away in almost as thin a slice as Jacobsen’s furniture. The designs from Kunsthochschule Kassel were somewhat less experimental. The “Kassel Collection 2” comprised items made of glass, leather, copper, felt or wood and all of them hinged on an enquiry into manufacturing processes and usage; indeed, the pieces on show were all mature products ready to go to market and not simply the result of student trial-and-error.

Toying around with materials, manufacturing processes and colors is part of everyday life at Hamburg’s Besau-Marguerre studio. On the heels of the success of their “Nido” stool, in Milan Eva Marguerre and Marcel Besau presented new designs for the Limited Edition Design Gallery at Stilwerk, including copper mirrors. By working the surface with different tools at varying temperatures they have created patterns in the mirrors. Berlin’s Shapes in Play office took part in the small special show called Berlin Trails (which, among other things, presented carpets by Reuber Henning and innovative folding furniture by Superéquipe). Using specially developed software sound is transformed into a virtual 3D product, in this case a vase. Since the digital object is mutable, it can respond to inputs in real time. This is then directly reflected in the product: if the volume is turned up, there are greater differences in the texture of the vase, created by Johanna Spath and Johannes Tsopanides using a rapid manufacturing process.

What you sense in Milan is that the days when the big boys tried to out-trump one another with wave after wave of innovations are over. In Lambrate there’s new design to be seen, not always design that has reached maturity and is ready to roll, but design that sometimes is still too stuck on visually proving that it can be recycled. But at least this is design that responds to scarce resources and with the one or other idea will be incorporated by mainstream industry into the future of furniture design. 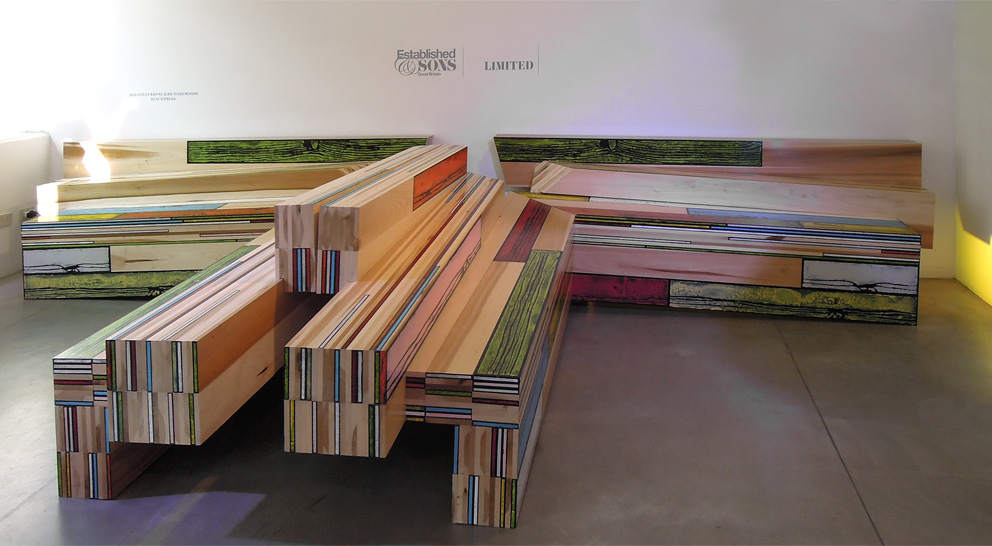 Established & Sons, for years the big hitter in Brera, the brand with the greatest sex appeal– this year it opted for a very modest abode on Via Ventura. Photo © Uta Abendroth 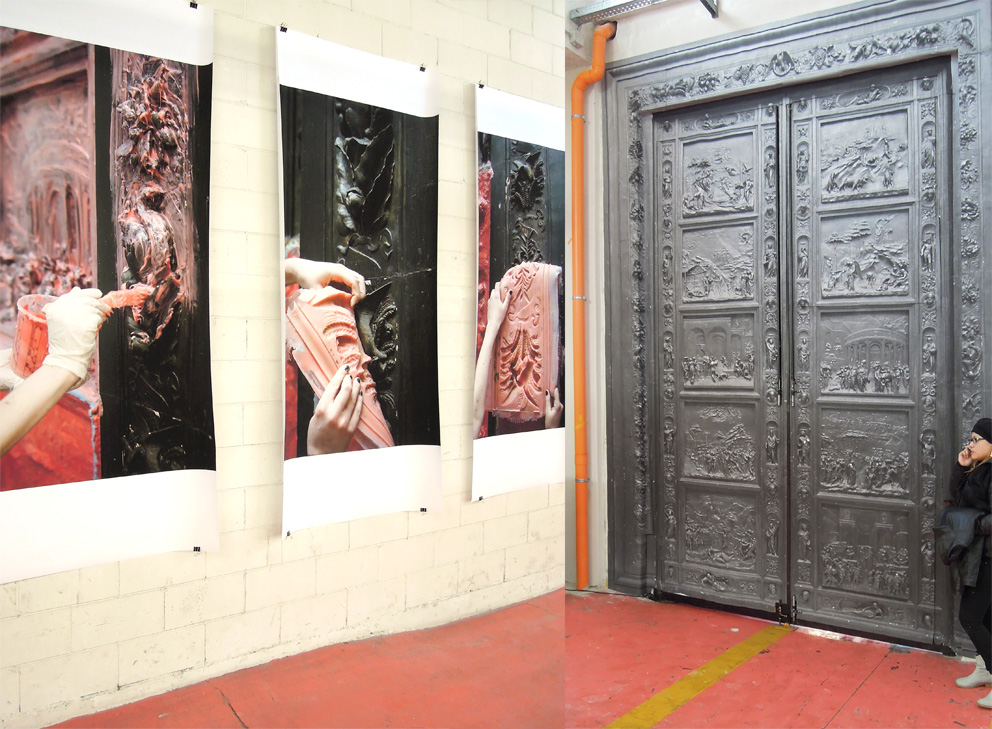 This time again, many experimental works have been shown at the Ventura Lambrate. Photo © Thomas Wagner, Stylepark 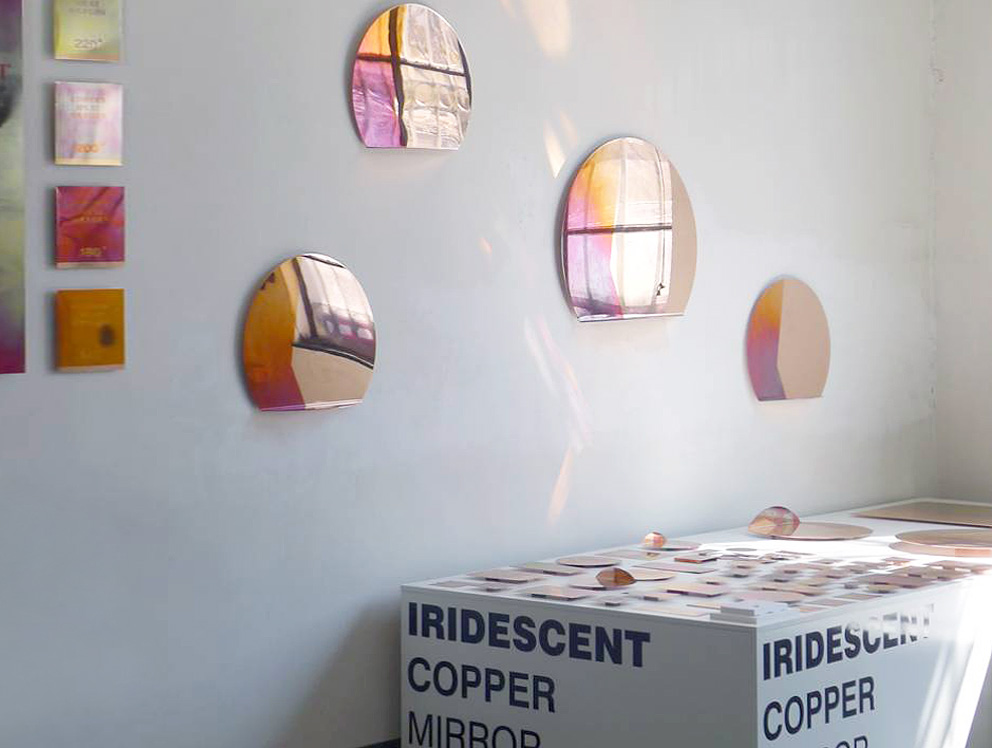 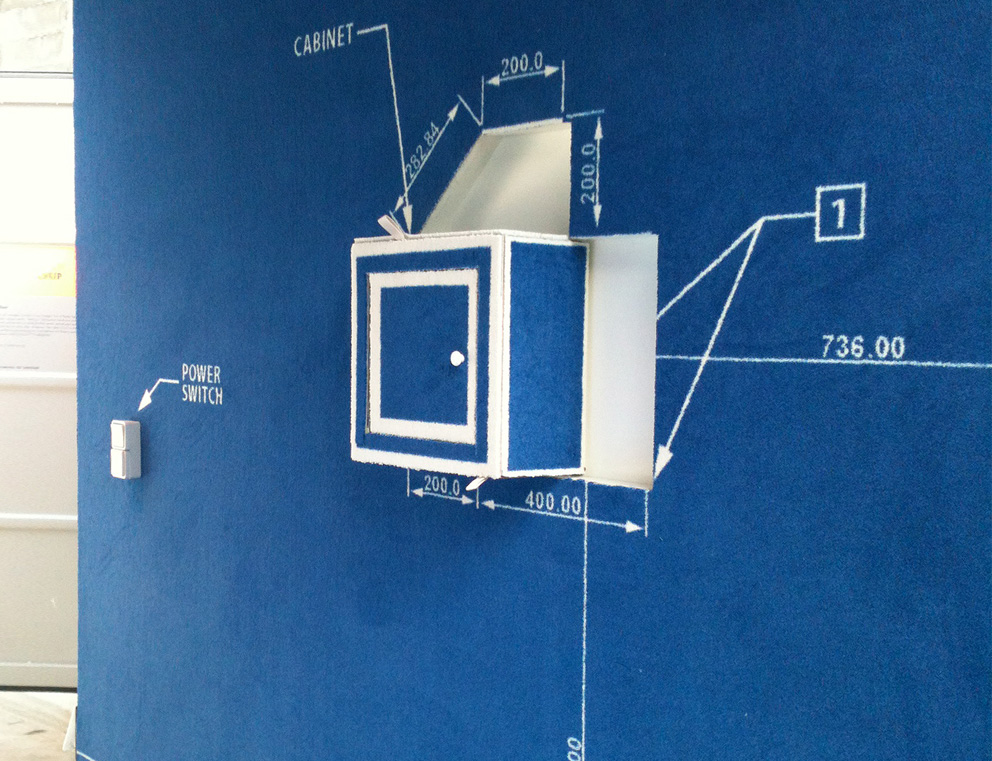 Carl Emil Jacobsen clad a room entirely in blue carpet and printed white lines – the outline of the furniture items that you could then fold out from the walls. Photo © Uta Abendroth 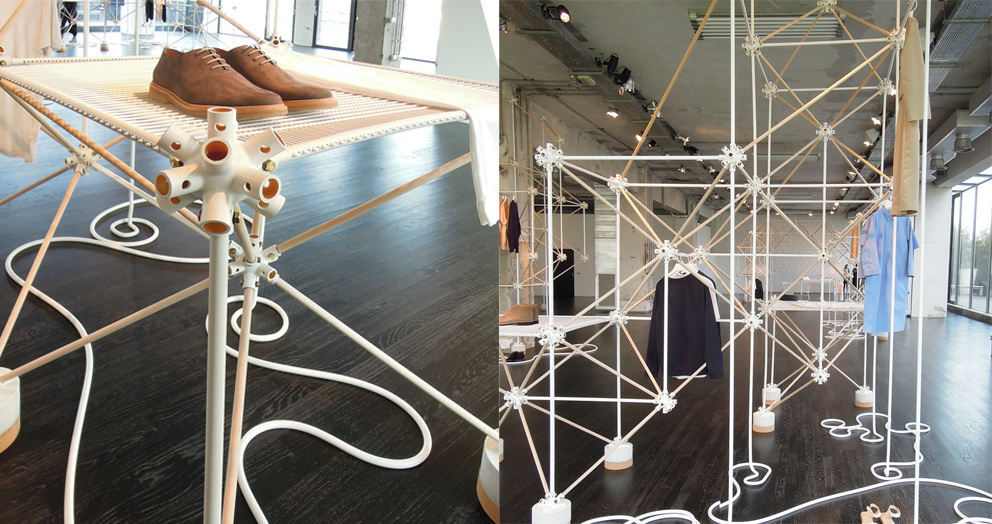 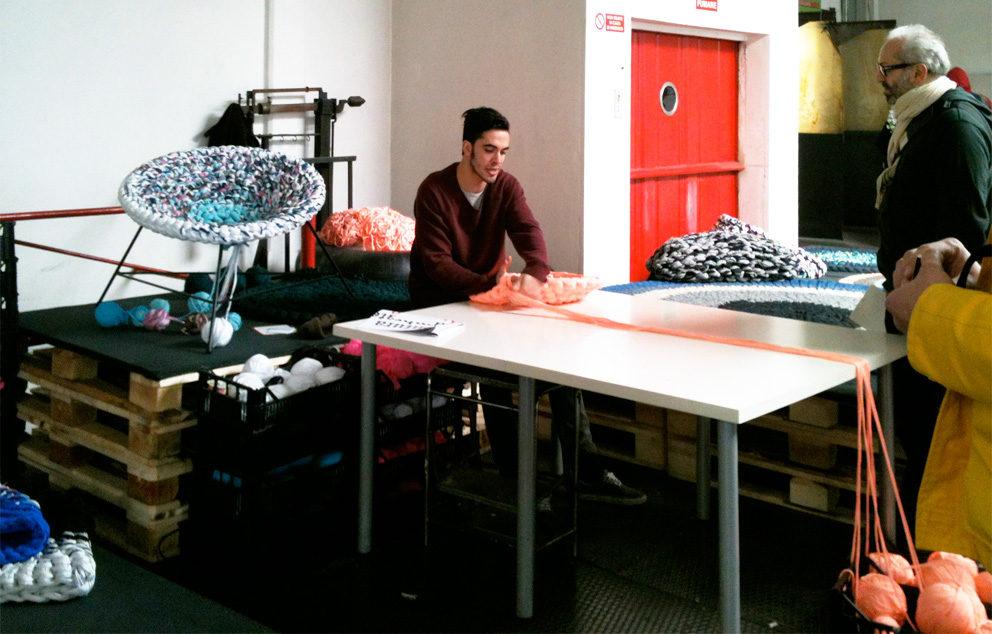 The Italian designer Andrea Brena, who is living in Eindhoven, creates carpets and furniture from remnants of the textile industry. Photo © Uta Abendroth 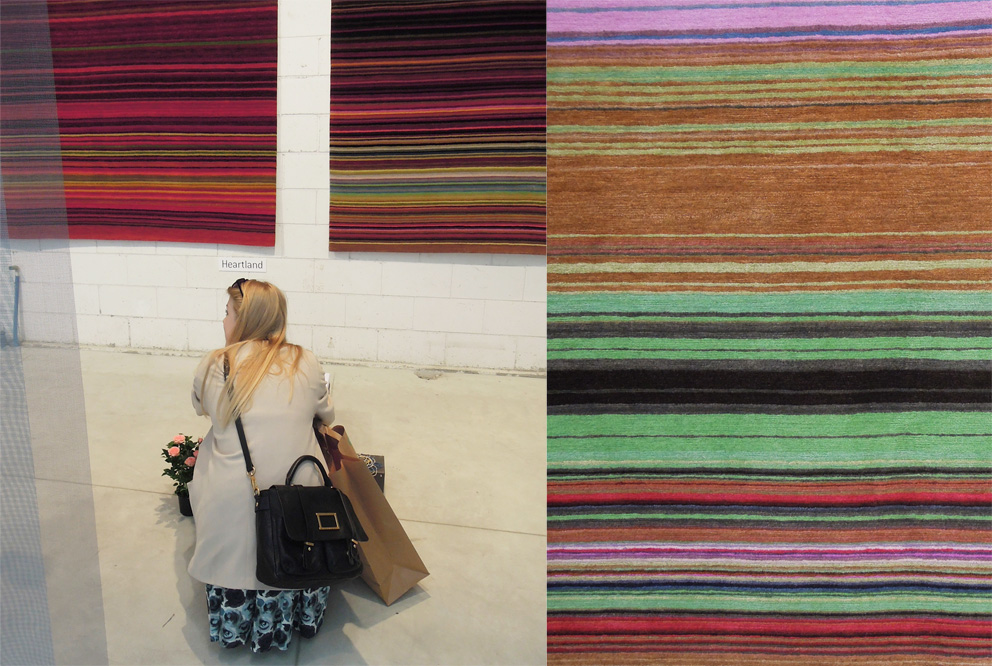 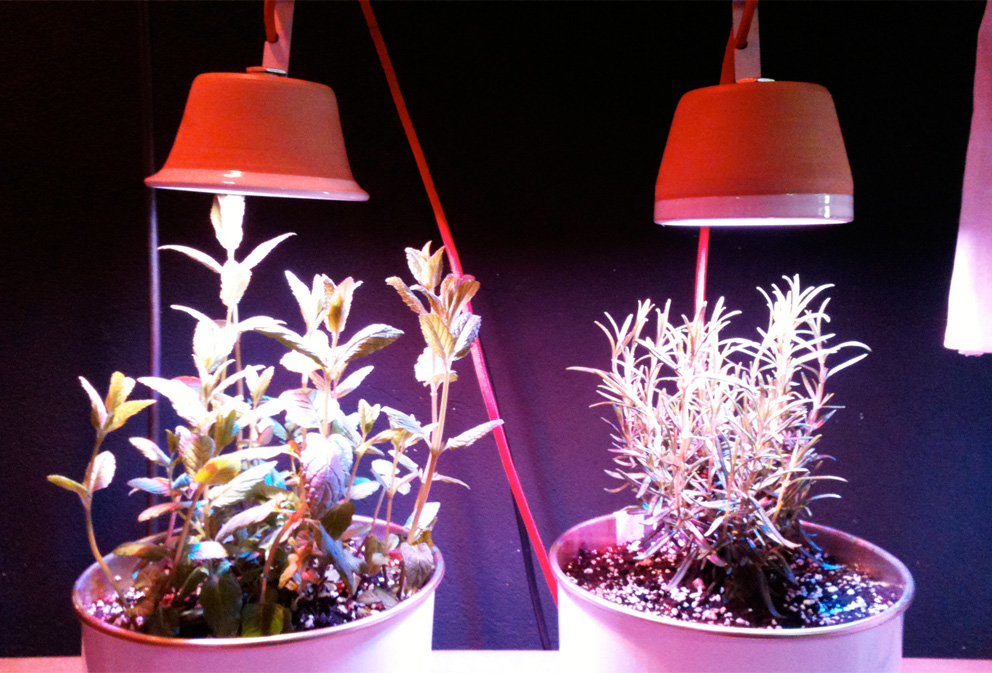 Bulbo has developed the “Cynara” and “Quadra” LED luminaire models that deliver light on a spectrum that enables you to grow your own herbs, vegetables and lettuce at home in your kitchen. Photo © Uta Abendroth