Young, dynamic, cosmopolitan. Born in Spain and based in London, Cristian Zuzunaga has in the course of his life already concerned himself with a whole gamut of disciplines, from biology via typography to fashion. For some time now he has drawn inspiration for his textile prints from urban elements. For his "Squaring of the circle" collection he zoomed into photos of cityscapes - getting up so close that they dissolved into a pixel structure of tiny geometric shapes. He has now launched a new set of designs for Kvadrat, in which he addresses issues relating to space and time, urbanity and globalization. Nancy Jehmlich met Cristian Zuzunaga and spoke with him about the rain in London, fortunate coincidences, and the passion of working with pixels.

Nancy Jehmlich: You were born in Barcelona, and live in London. Can you imagine moving back to Barcelona?

Cristian Zuzunaga: That's a good question to start with as it is one that has been on my mind, too. I see the city in which I grew up in a better light. I could not recognize my old life in the context of Barcelona. Barcelona is inspiring, it is exciting, when I go back, the colors, nature, the people, the craziness. But probably I will move to the country, and then I will need near at hand London, and Barcelona, too, but more the proximity to Europe than to Spain.

Why did you leave Barcelona?

Zuzunaga: I was 17. My father comes from Peru, my mother from Barcelona. I grew up there, but I never felt 100 percent Catalan, or 100 percent Spanish, and clearly not Peruvian, either. When I discovered London, I did not at first like it. But after a while I found out that I was wrong because London confronted me with things that people did not want to see. In Spain it's sunny and you think the world is fine, if there is no sun, then the world suddenly looks different. If the sun shines in London, then it's a bonus. Above all ten or twelve years ago. Nowadays, it rains less. Once it rained really hard and I thought that I needed something for myself as I cannot live in dependency on the weather. It takes years until you notice just how very productive you can be. I do not think I will go back in order to live in the same way to which I am accustomed.

For you, what are the advantages of working in London?

Zuzunaga: London confronts you. It is a difficult city, but at the same time it gives you everything you need. You can find your way in it, even if there is one obstacle after another in your path, and you still know better at the end who you are and what you want.

How did the collaboration with Kvadrat come about?

Zuzunaga: That was really funny. It was all pretty simultaneous. You need time to understand simultaneity. I graduated from the MA at the Royal College of Art with a menswear fashion collection in collaboration with Peter Smith. We called the collection "Quadrat", which means square in Catalan. When I presented the collection someone dropped by and suggested to me that I go to Kvadrat. At first I thought he was talking about the "Quadrat" collection, but then we realized we were talking at cross purposed and he showed me what Kvadrat does. For the presentation of a fashion collection I covered an Ikea sofa with one of my print designs and displayed it at a show, where the focus was on fashion. Suddenly someone came up to me and wanted to buy the sofa. I said that actually it was not on sale. But the person insisted. The next day I saw Ron Arad and mentioned the situation. He told me to call Moroso's showroom in London. So I went to Moroso in London bringing greetings from Ron Arad with me. And the director of Moroso in London then sent me to Kvadrat. And all of this happened in the space of a single week.

The idea of "squaring a circle" is a metaphor in many languages for an intractable problem. So why is your collection called "Squaring of the circle"?

Zuzunaga: A large part of the inspiration came from alchemy, from the different stages and chemical processes, from our own evolution, from the body to the spirit. I thought the title was a good way of describing what I tried to do in my work. In the final instance, pixels have existed for centuries. It is not really my own idea, I am just the catalyst. But perhaps not everyone will understand that. Not that I care. We are all alchemists, we try to do impossible things in our life, we do not know why we are here, but somehow we muddle through. I thought that is reason enough to name the collection after a problem that cannot be solved.

How are the pixel images generated?

Zuzunaga: That depends. It started years ago when I was still studying biology. You look through the microscope and you see shapes and colors. Suddenly, you become devoted to looking closely, to seeing the world from different perspectives. Then, years later, when I had long since abandoned biology, I discovered photography. I bought a scanner, scanned photos and started processing images. You can spend hours cleaning the dust of images. It is like an addiction, and at some point the pixels become ever more important. I'm talking here of round about 1999, 2000. Time passed, I studied typography. In 2004, I discovered book printing and thus Guttenberg, Bauhaus and so forth. A new world opened up before me.

When I headed for Shanghai in 2006 as part of analysis and research for my MA dissertation which focused on studying the swift changes of globalization - I noticed the many plasma screens, digital ads, and thus the pixels. And suddenly it went click, the pixel is the icon of our age. We see the world through these tiny little shapes that resemble atoms. You can see it but not understand it. And it is endless. So I started developing the projects. It was clear to me that the concept underling it all had to reference our present reality. Something that affects us all. I cannot simply do my own thing. That would interest nobody.

You can see the Spanish influence from the choice of passionate colors. It was a digital and analog approach because I simply often work by hand, too. I processed my photos, arranged them, surveyed the result and then looked at them in a pixeled and abstract state. I have no reservations as regards the digital domain, it has become a solution to problems, the destruction and processing of images.

Should we focus more on details?

Zuzunaga: I like that, I must say. The hardest part is actually to choose the path you want to go down. The entire collection, including "Shanghai" or "skyline" and "cityshapes", stem from some shapes, shadows, reflections just as on a window pane you see two angles of different shadows superimposed. I photographed such things, in Barcelona, London, Shanghai, New York and then process the photos, looked at how the reflections responded to the buildings, etc. Things shift and become more real - or do not depending. You then see the city differently. "Skyline" is like a frontal image of New York. The other textile design shows more of the different perspectives of a city. That is also a method of paying attention to more details. Even if you look at the fabric more closely each person will still potentially see something different. And I love critical exchange. I also love colors. Colors bring mood into a room.

You once said design is the ‘playful interpretation of reality'. Should the designs then not look blacker?

Zuzunaga: I can't remember saying that. But it sounds good. (laughs)
Design hinges on identity and how you project yourself, also through the projects you do. We need colors, colors and shapes go hand in hand. We have colors in nature, around us, they are givens. It is like with details - you start looking more closely at a flower and the same happens with design. We need that. We need black and white and more colors, too.

Do you worry that you will be associated only with the pixel design?

Zuzunaga: That makes me laugh, because the beauty of things is to know when to stop, when to continue and why. It's hard. Anyone can have a good idea and sometimes someone makes something of it. I have not only produced a print, I have produced thousands of them, but that is only one of them. At the end of the day, you choose one and that's the hard part. For example, a good photographer may be remembered with just perhaps 20 photos after the thousands he surely took. I find that astonishing. There are so many different possibilities. I have been working on squares for six years now. It is not boring, and opens up all sorts of things. And I am not a worrier. I see it as a challenge when people ask me such things. People want you to progress and create something new. So what do you mean? Do you worry?

Zuzunaga: But after a few years you will think, now's the time.

Zuzunaga: It is a reinterpretation of a work that fascinates me personally. Once, when I was at a trade fair in Paris and saw all the things there, the vases, the décor, and all the products, I found myself asking who needs all this. At the same time I saw how people asked me when I would sell my stuff. Later I thought that it is fascinating how child-like the excitement in people's reactions and how happy they all looked when gazing all the colorful prints. Powerful colors can trigger playful emotions in such a context. After all, it's all about feelings. Gerhard Richter, for example, has also worked with pixels. Everything has already been done by someone. What counts is now you move the idea forward, how you reinterpret it, how people talk about it and whether the age when the idea arose has since past. 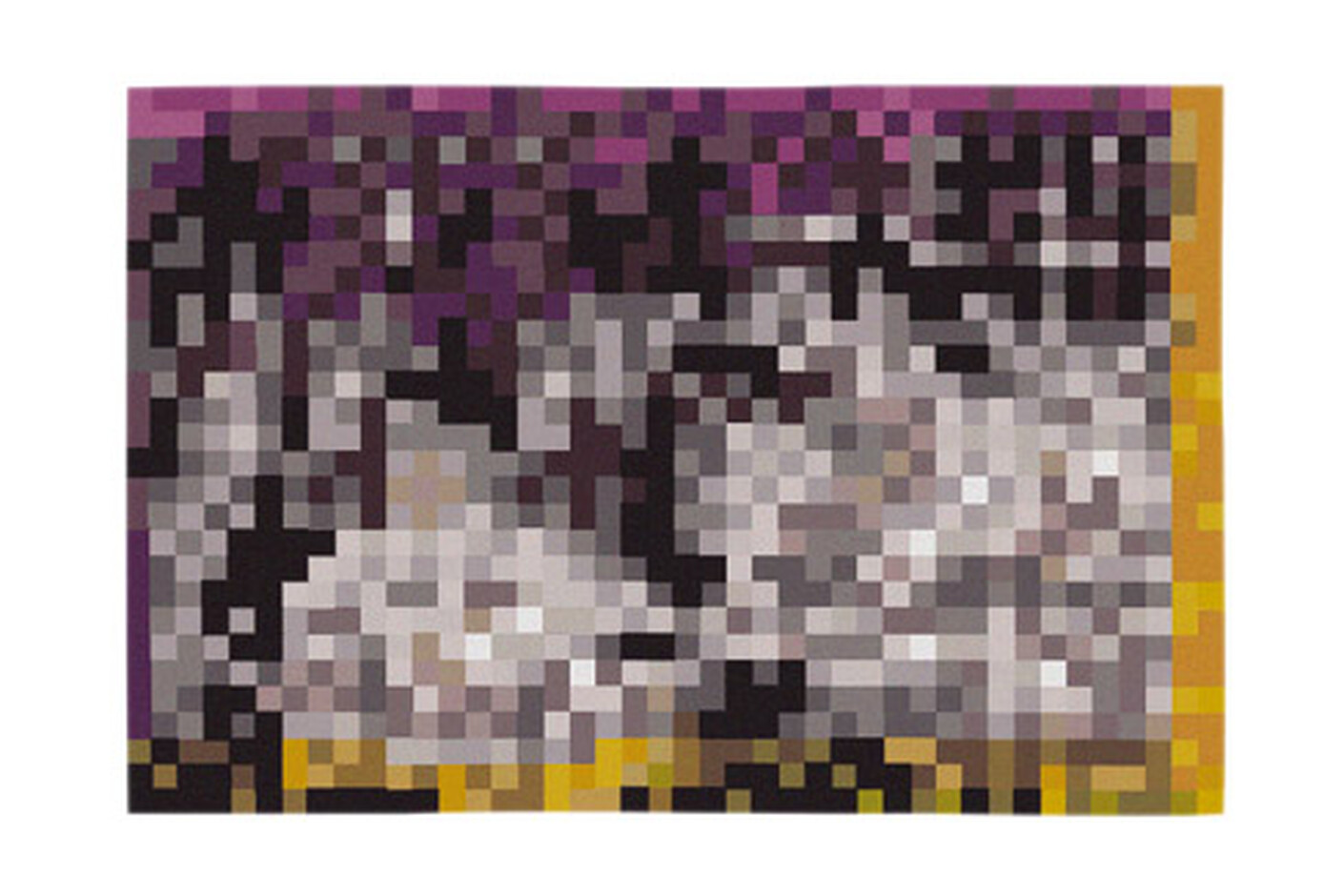