"Small green parrots had completely taken over a tree at the edge of the planted section. (...) A small herd of grey squirrels mixed with the parrots such that over an area the size of a bedspread parrots and squirrels, all of them in shuddering motion, alternated as if in a fabric pattern. A living carpet stretched out before my eyes. Had no silk-weaver seen this before me?" Martin Mosebach's 2005 novel "Das Beben" (the tremble) overflows with concise descriptions of India. Art arises from nature, nature and culture meld. The city, our second nature, blends smoothly with this set of specimens. "My great-grandfather," comments Umang Hutheesing, scion of an ancient Indian textile empire, "founded a joint venture with Louis Comfort Tiffany. That formed the basis of our commitment to contemporary design." And he continues: "By way of background, today 72 percent of the diamonds traded worldwide are polished in our region." Whenever the 46-year-old starts talking, stories merge with history. The descendant of a family of merchants and textile magnates that can trace its roots back 1,200 years, he counters my semi-ironic objection that "you tell history as if you belonged in it" with casual pride "of course it belongs to me."

What do the Hutheesings stand for? Historically for world trade in the spirit of the Silk Road from China to Venice. But also for the linkage of culture and state-of-the-art technology – and for all kinds of cooperation. This family, with its branches of Lalbhais, Hutheesing and Sarabhai, is also a vital actor and motor driving the emergence of Ahmedabad in Northwest India (the world's largest denim production center) as an epicenter of culture and knowledge in India. Individual family members, such as Umang's great aunt Manorama Sarabhai commissioned Le Corbusier back in the 1950s to design villas for the clan. Umang Hutheesing's uncle Anand Sarabhai still lives with his girlfriend, a Greco-American sculptor, in a long since overgrown villa. We visited the two there one fine spring morning. "I've lived for decades in a kind of garden and architectural paradise, something of which I am very aware. We do our best not to change Le Corbusier's concept." After tea we head for the pool behind the house. Five favorite dachshunds are barking loudly between the uniformed butlers.

The metropolis in Gujarat state has 5.8 million inhabitants is a veritable Mecca for international architecture tourists. Over tea in the private Hutheesing House, I meet Sarah Kabbaj and Peter Jordanov, students at Berlin's University of the Arts: "For us, Ahmedabad is a very obvious travel destination," with Louis Kahn, Le Corbusier, the Mogul architecture," they say. Charles and Ray Eames taught here at the National Institute of Design – likewise co-founded by the family. This, too, can be attributed to the still active 94-year-old aunt. "Design," she confesses, "is part of my genetic code. As children we were introduced to that world from the very outset." The Hutheesing Design Company was itself founded as early as 1881 by their ancestor Magganbhai. The political side to the family history is even more impressive. It played a role both in the transition to Mogul rule and, at the beginning of the 20th century, to the rebellion against the British. The latter ended for 12 family members on the gallows. Mahatma Gandhi, a friend of the family who was also a native of Gujarat, and had his headquarters in Ahmedabad, ran his Ashram Sabarmati on the banks of the Sabarmati river. The list of guests who have visited Umang's old town palace (the "Haveli") includes not only Queen Elisabeth and Nehru, but quite naturally also the likes of Bill Clinton and François Mitterrand.

Umang spent 17 years abroad (in Japan, the US and Britain): while at school, at university and then at the beginning of his career. He returned to his home town in the years of the awful earthquake, 2001. A tragic coincidence that after initial despair and thoughts of returning to the West culminated in social commitment and the development of his own cultural institutions. After ten years setting them up, his "master plan" now, he says in combining the two goddesses "Saraswati" (knowledge) and "Lakshmi" (affluence) in the right way into the world of local design. "Only where there is sufficient knowledge does wealth arise, it's that simple", is how he explains the allegory, while sipped an iced lassi.

Bringing together knowledge and money, brilliant minds and "venture capital" in order to help all walks of Indian design get off the ground – that is his central project. The early stage of the project is to forge new links. For example, he has succeeded along with international fashion designers in placing a photospread of a full 22 pages in Vogue – it hinges on the idea of "inspired by India". It won "best fashion spread of the year". Here, he tried for the first time to inject the vibrant Indian design culture, which he summarized in the slogan "more is more", into a Western context.

There's plenty of material to study and view, all of it family-owned; be it the gold-threaded Mogul costumes, Le Corbusier architecture, Tiffany furniture or traditional wood carvings. Small wonder that design researcher Bishaka Shome, who helped work on M. P. Ranjan's monumental book "Handmade in India" (2008) and was appointed two years ago as senior vice president of the Hutheesing Heritage Foundation. The marvelous range of the collection was visible (if only in small excerpts) at his exhibition on "Les derniers Maharajas" (the last Maharajas), which brought together clothing from the Grand Durbar through to Independence (1911-47)), which he held together with Pierre Bergé at the latter's "Collection Pierre Bergé –Yves St Laurent". That was in 2010. In March 2011 "Fortune India" published a portrait of Umang Hutheesing in which he started thinking programmatically about fashion.

Where will this path lead? "In the field of textile production we have always preferred to combine craftsmanship with leading-edge loom technology. There's a strong textile mechanical engineering industry here." The next step will perhaps lead out of the world of textiles and into new Indian furniture design. India currently has the critical mass and it is time to give it a new direction and generate a sense of the new such as seized Italy in 1972 with the MoMA exhibition on "Italy, a new domestic landscape". Yet that will require a strong idea that bundles all the different trends.

Ever since I first met Umang, our discussions have continuously developed in dialog with a constantly changing group of other persons, industrialists, economists, dancers, designers. Such alliances would hardly form in this way in Germany. The common ground shared by the Indians in these discussions is their profound knowledge of their history and culture. Not since the mid-1980s, with the new beginnings in Barcelona, have I witnessed such as vibrant debate on the "new" in design. The central theme: How can India vigorously advance its inestimable trove of knowledge and forms under 21st-century conditions without everything becoming reduced to folklore-like kitsch?

If one thing is certain then it is that there are many potential pitfalls. Many Indian projects degrade into foolishness owing to the omnipresence of provincialism. I don't see this risk here. There are plenty of international resources and contacts in this instance so the real question is whether a meaningful linkage of international multipliers, regional craftsmen and designers, global markets and media is successfully developed, in other words that "amalgam" which a coherent innovative movement needs in order to thrive. Are self-appointed fashion czars such as Umang Hutheesing able to initiate design innovation at the interface of technology and craftsmanship? Will the wealthy Indian upper class accept "national" design or simply continue to go for products by Artemide, Vitra and Iittala? Only if there is a humming local market (which could be huge) will it be possible to realize such a concept.

Populous India is associated from the outside with slums and corruption, an image reinforced by Danny Boyle's 2008 film "Slumdog Millionaire", for example. On the other hand, the subcontinent has breathtaking potential, precisely in the domestic markets. The forecast is 9-percent GDP growth for 2011-2. Western brands are increasingly focusing not just on China but also on India, as a sales market rather than a production hub. Local actors are very self-confident and superbly abreast of the momentum of developments. Here, there are good prospects for independent cutting-edge designs in all segments. If one thinks of Umang Hutheesing and his epic family history, then the project of a comprehensive Indian design renaissance does not seem like pie in the sky. Instead, a scenario is emerging in which his well-dosed combination of high tech, style, global reach and business acumen will possibly soon be making its mark. 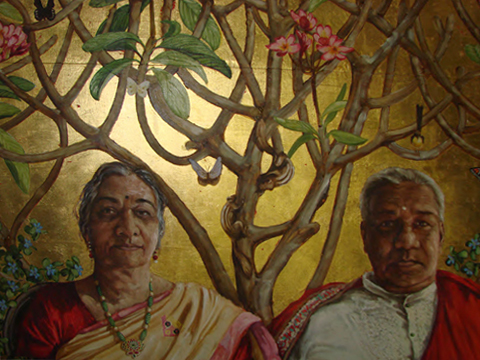 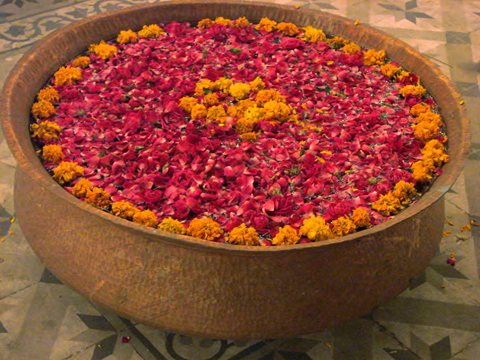 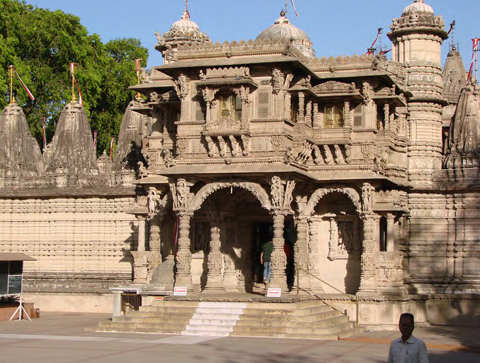 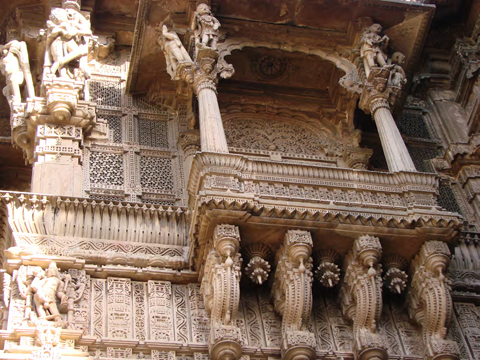 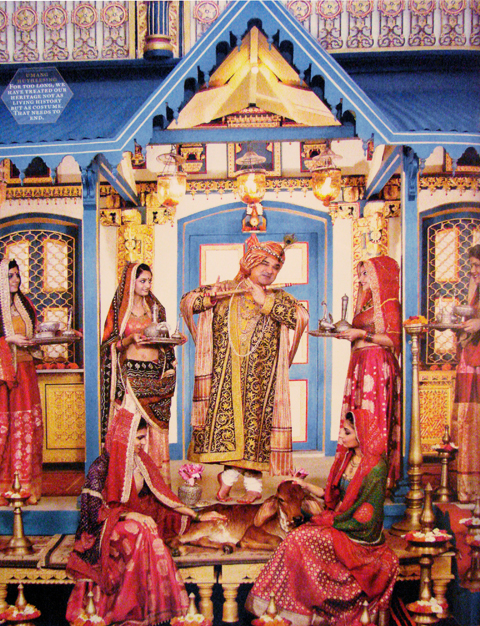 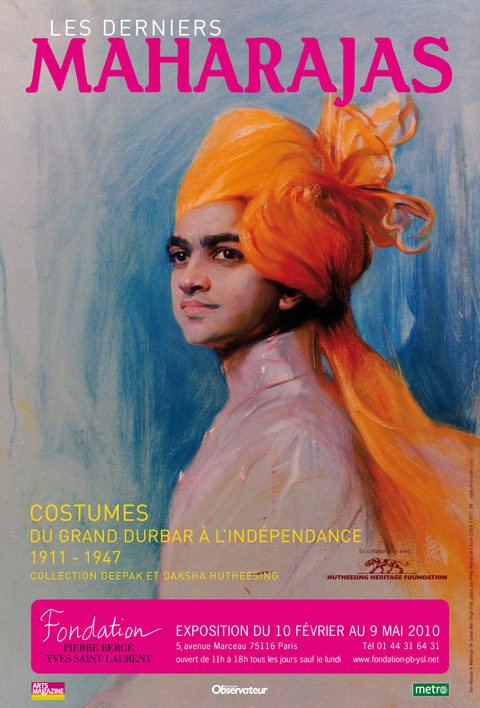 Catalog related to the exhibition "Les Dernier Maharajas" in Paris, 2010 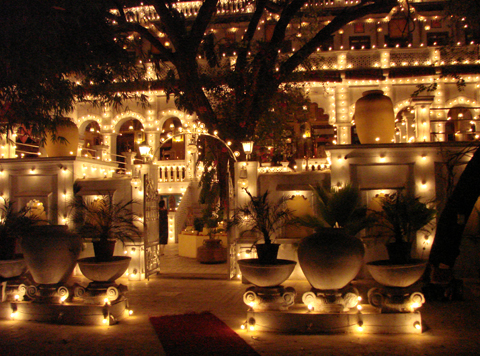 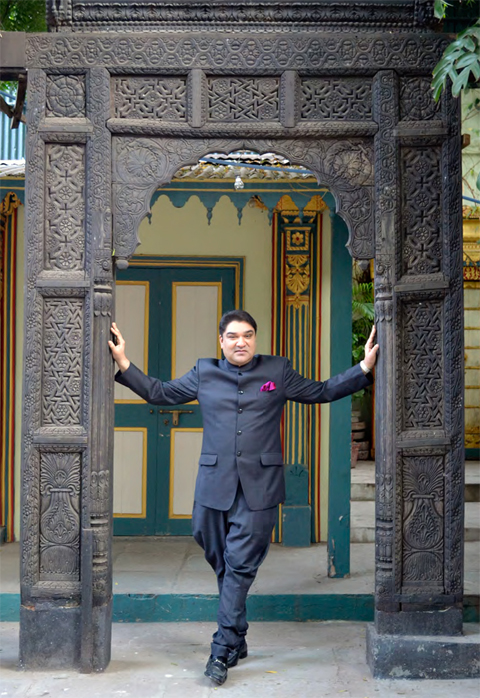 Umang Hutheesing in a wooden door-frame from his private collection, photo: HDC 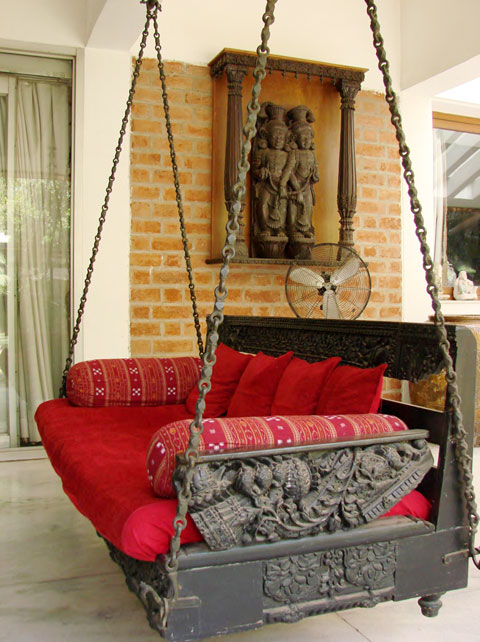