Hashtags and interaction – this year the Heimtextil Trend Space took visitors on a playful journey of discovery.
by Anna Moldenhauer | 1/18/2019

There was lots to explore this year at the Heimtextil trend show in Frankfurt/Main: On the back of a new concept, the site moved from Hall 6.0 to Hall 3.0, where it now rubs shoulders with textile designers, CAD/CAM suppliers and manufacturers of digital printing machines. This was the first time Frankfurt-based Atelier Markgraph was responsible for realizing what was formerly known as “Theme Park.” “We realize exhibitions and trade fair stands and the ‘Trend Space’ is a hybrid of the two,” says Hellen Kleine, Creative Director at Atelier Markgraph.

In line with the motto “Toward Utopia,” five exciting presentations were realized from the predictions of the Trend Council: “Pursue Play,” “Seek Sanctuary,” “Go Off-Grid,” “Escape Reality” and “Embrace Indulgence.” The imaginary worlds of design studio FranklinTill and Stijlinstituut Amsterdam as well as Spott Trends & Business proved highly diverse: From the desire for playfulness and creativity in “Pursue Play,” visitors to “Seek Sanctuary” were immersed in a minimalist atmosphere that created a gentle aesthetic with no strong stimuli. The section “Go Off-Grid” was dominated by an oversized, tent-like structure – in keeping with attempts to reconnect with nature without leaving a trail of destruction. To get in the right frame of mind, visitors could listen to forest sounds here. “Embrace Indulgence” in contrast exuded a touch of nostalgia, using fabric-covered round arches to create a luxurious feel.

This year the organizers wanted to see more interactive elements that could be grasped more quickly. “We sought to create a very clear stand design,” says Atelier Markgraph’s Hellen Kleine in summary. As such, for the first time the lifestyle trends were exhibited together with the fabrics, to underline the visual and tactile correlations. For the presentation of the textiles, Atelier Markgraph opted for a walkable horizon of sorts, in which the thematically relevant fabrics were lined up and combined. The material collages not only offered a clearer picture, but also gave rise to an inspiring mood board. Messe Frankfurt’s brief to Atelier Markgraph included providing numerous settings for impressive photographic documentation and consequently perfecting the “Instagramability” of the Trend Space.

For social media presentations, visitors were able to choose their vision of a utopia in the center of the space in the form of speech bubbles. Non-movable selfie sticks and the preset hashtag #thatsmyutopia encouraged visitors to capture the moment. The mirrors integrated in a mobile were also popular aids for the perfect self-presentation. Those looking for even more ‘ego show’ could disappear in “Escape Reality” into a selfiedrome completely outfitted with distorting mirrors and with a revolving textile installation at its center. For a calmer start to the brief escape from the humdrum, in “Seek Sanctuary” visitors were able to enjoy the heavenly tones of the ambient music luminary Brian Eno beneath fabric canopies.

Whereas in the Trend Space visitors had a clear assignment to present themselves effectively in media, their intuitive understanding of the hidden playful opportunities was more difficult. Without instructions it was not immediately clear, for example, that in order to trigger a dynamic media presentation with graphic and text effects in “Pursue Play,” visitors should not look towards the center, but towards the screens. Neither did the instruction “Feel it” in the fabric-covered round arches in the “Embrace Indulgence” section give any indication that there were hidden openings between the lengths of fabric offering an additional haptic textile experience. Nonetheless, overall the combination of analog and digital formats generated a delightful playground that enabled visitors to experience the “Utopian” trends in an emotional vein. In addition, in seminars and lectures held in the Lecture Area experts communicated how they rate the current textile trends and their impact on the sector. For the otherwise rather bare Hall 3.0, the Trend Space with adjoining café constituted a diverse island that acted as a communicative meeting point and temporary refuge at one and the same time. 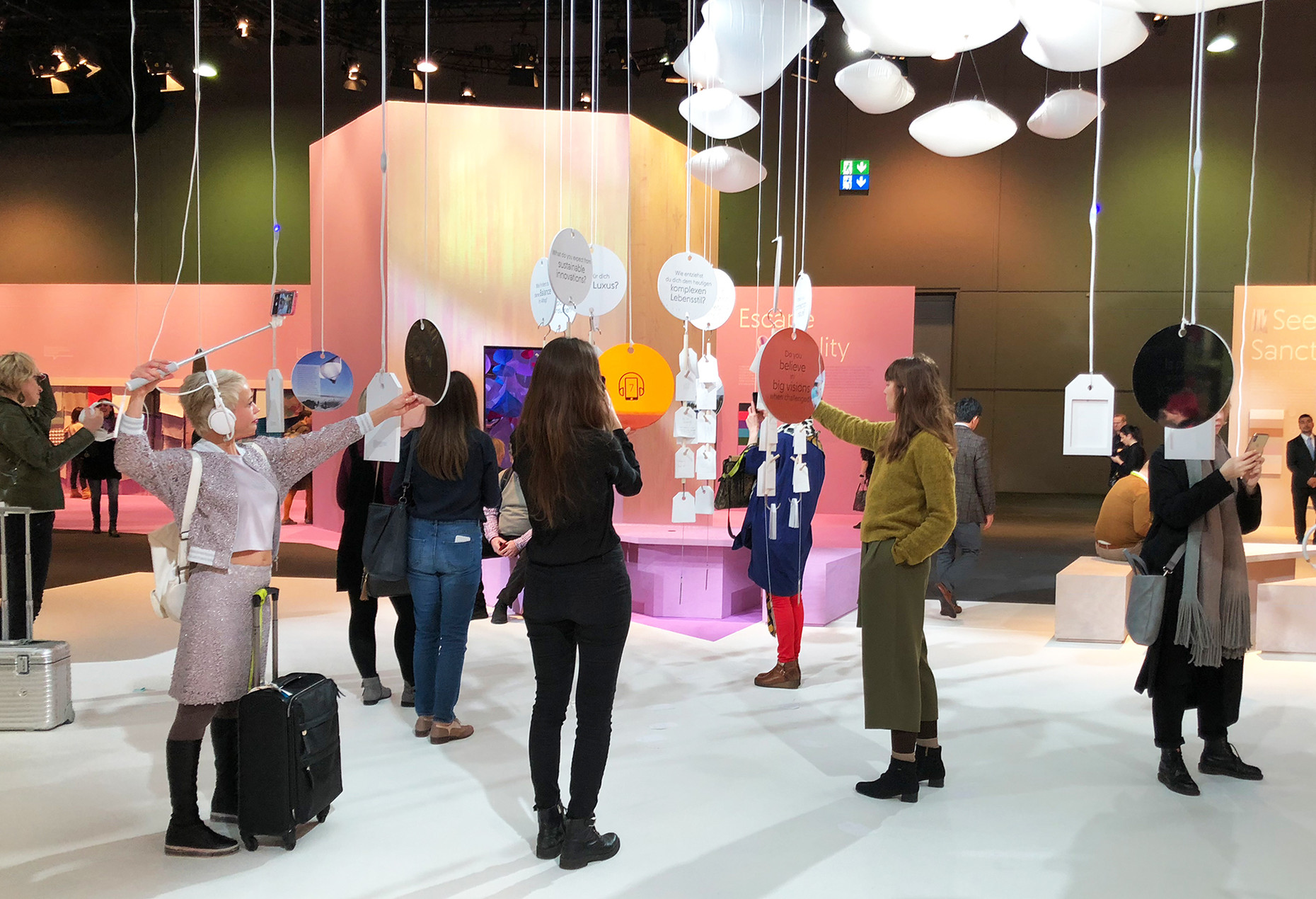 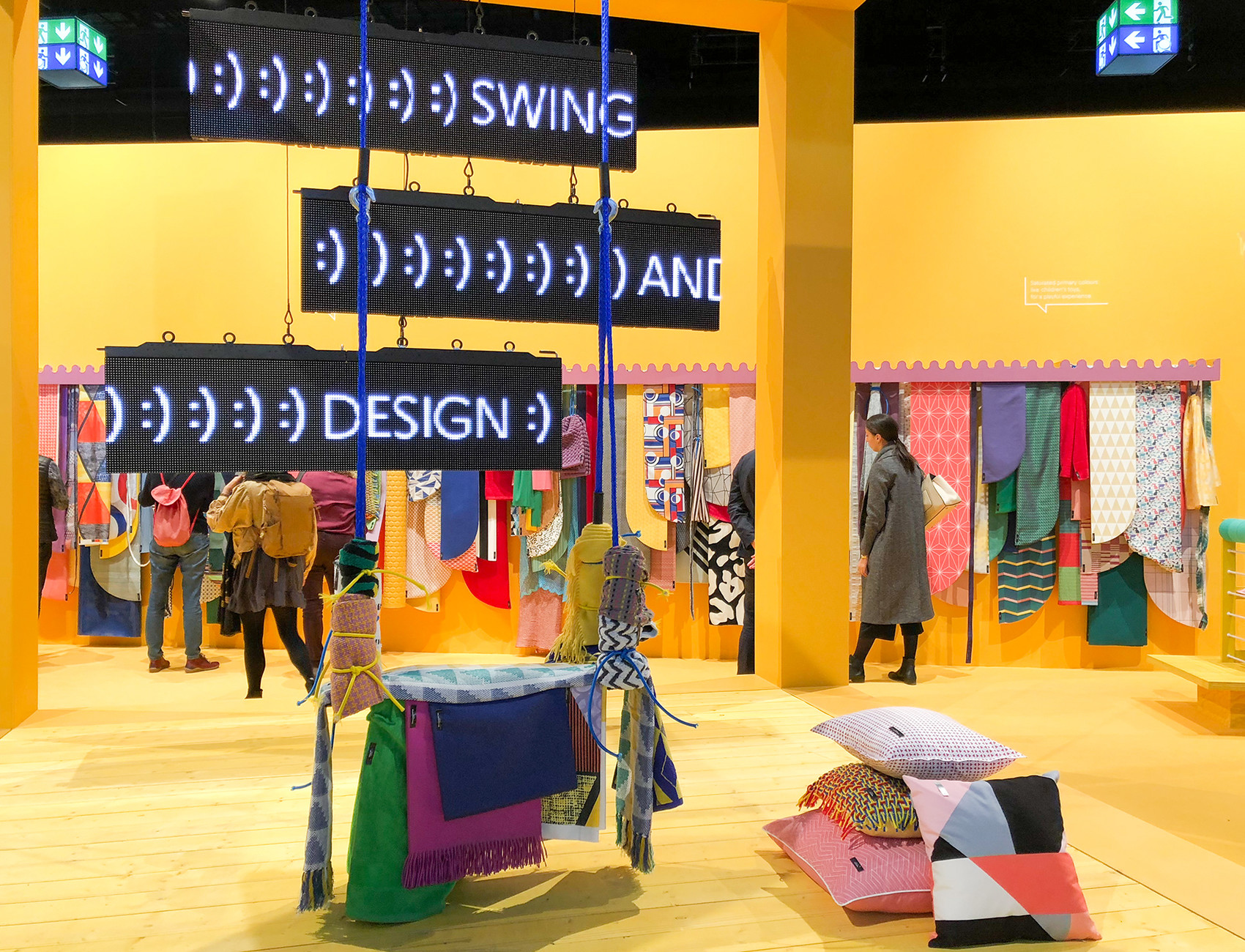 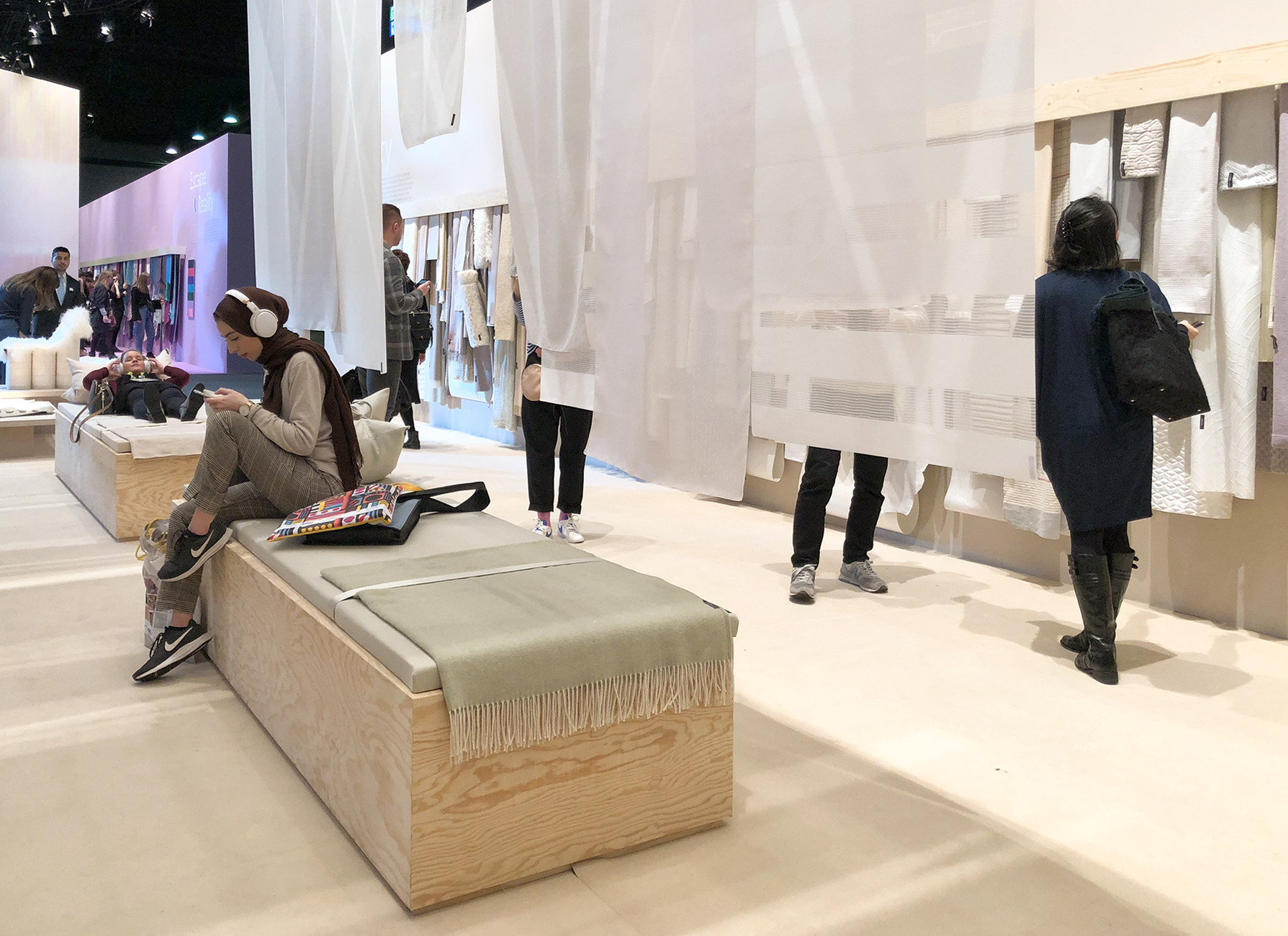 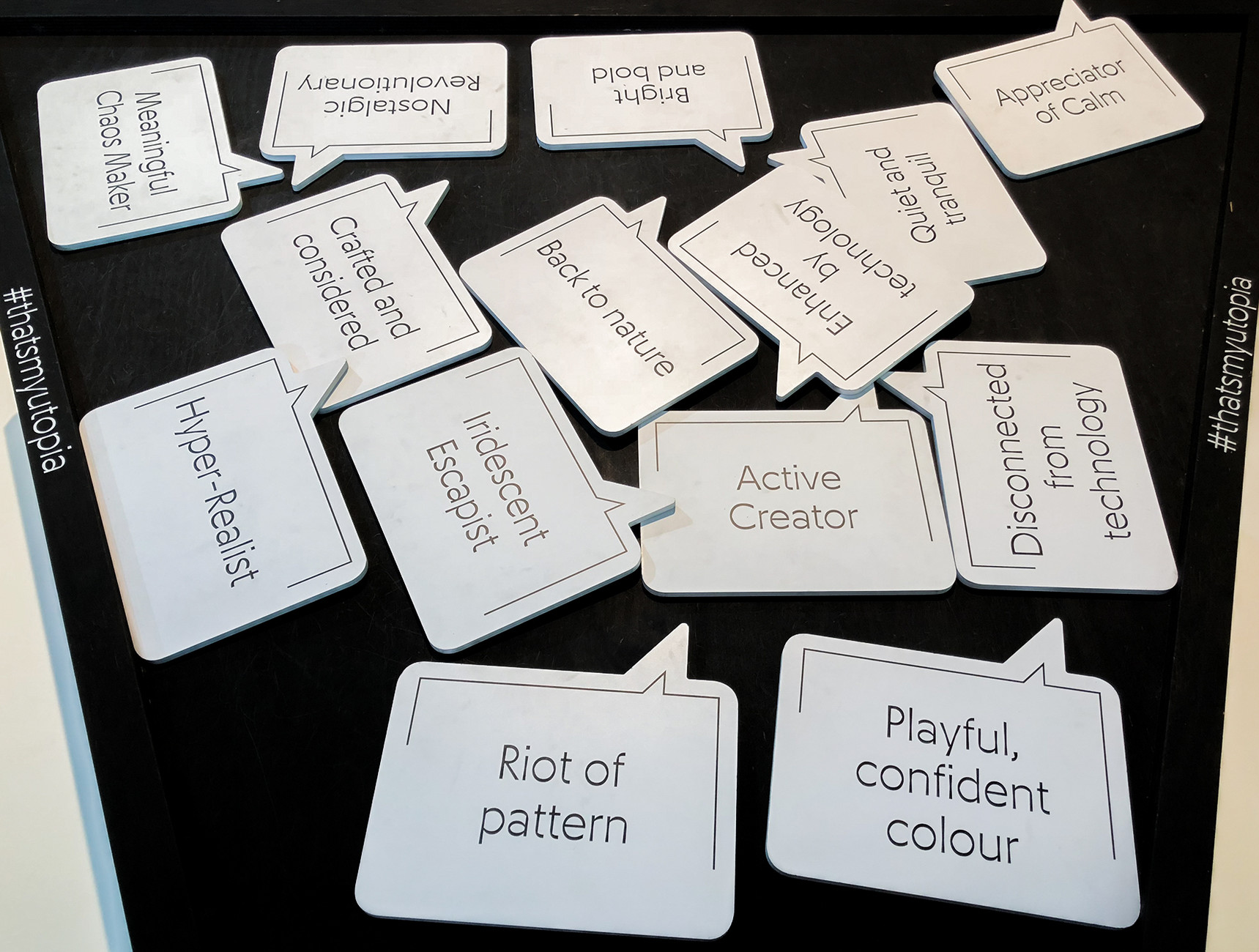 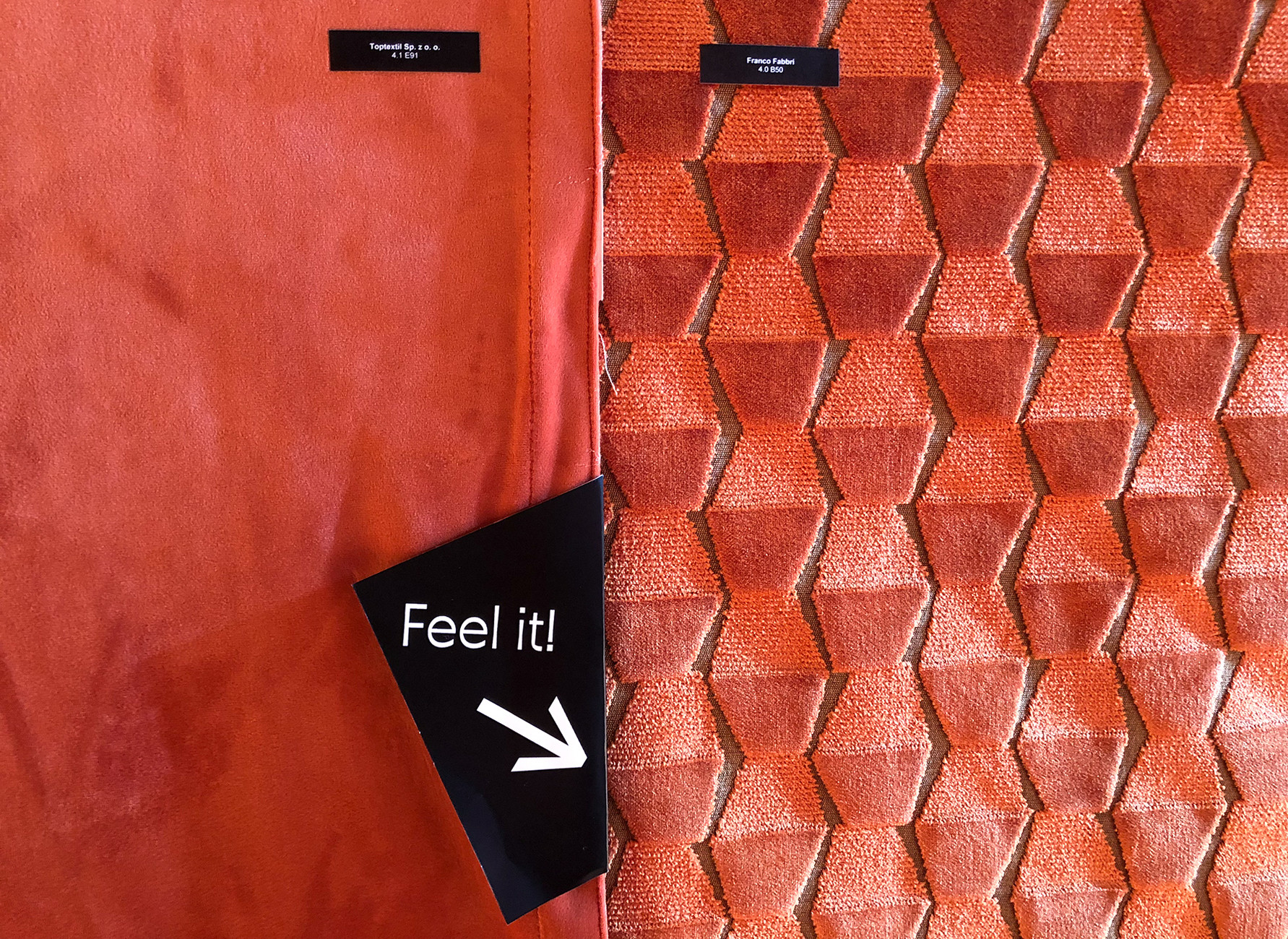 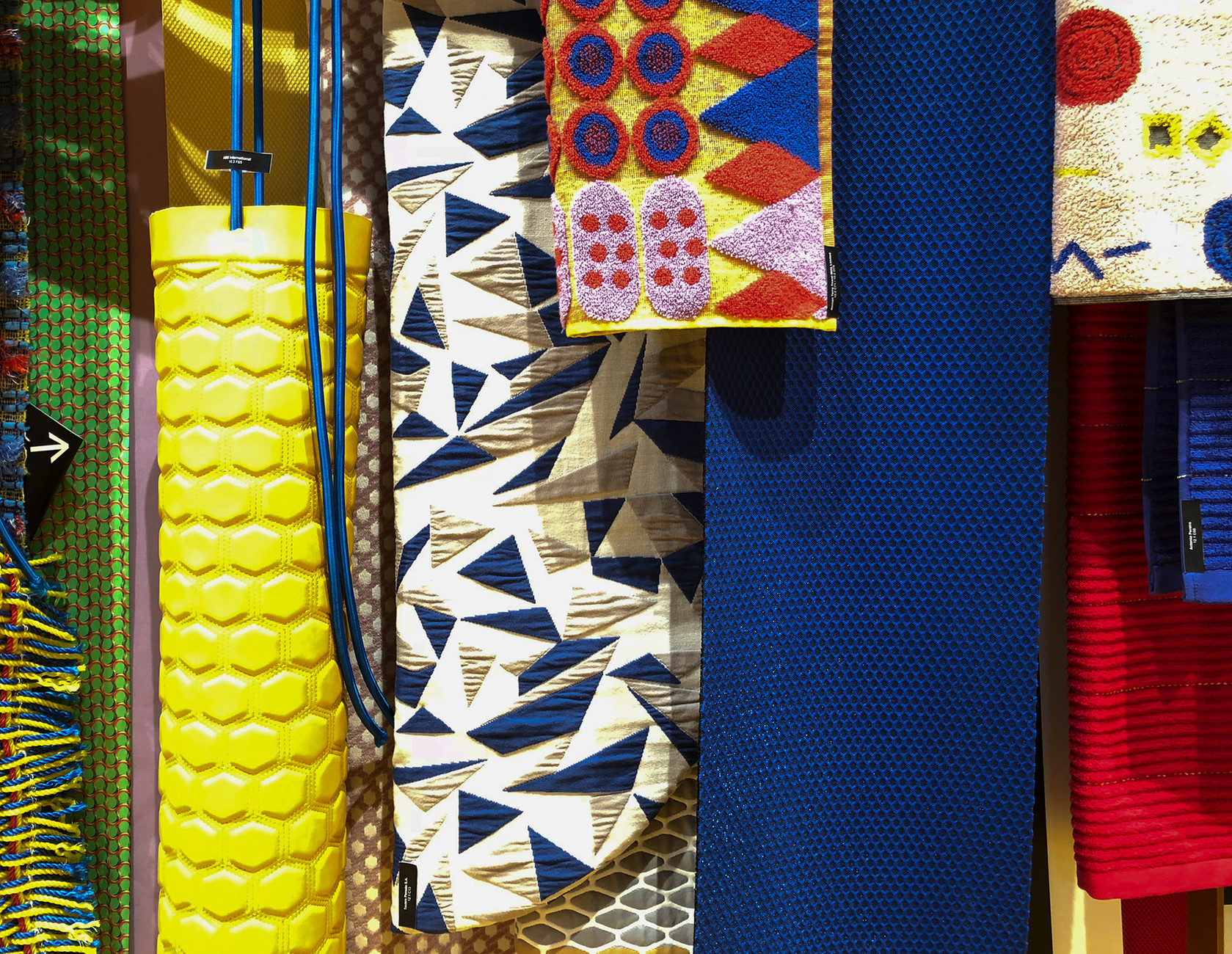 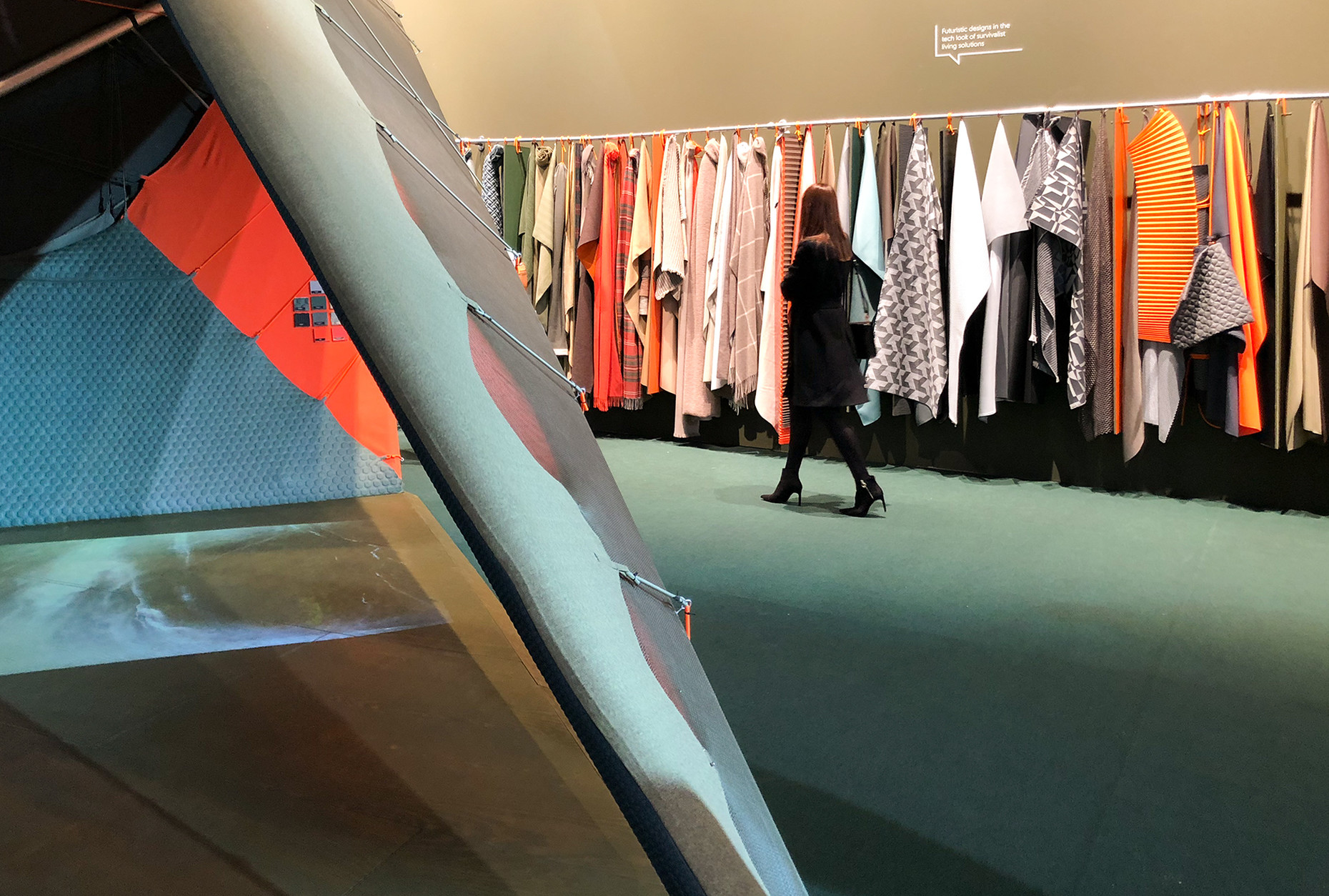 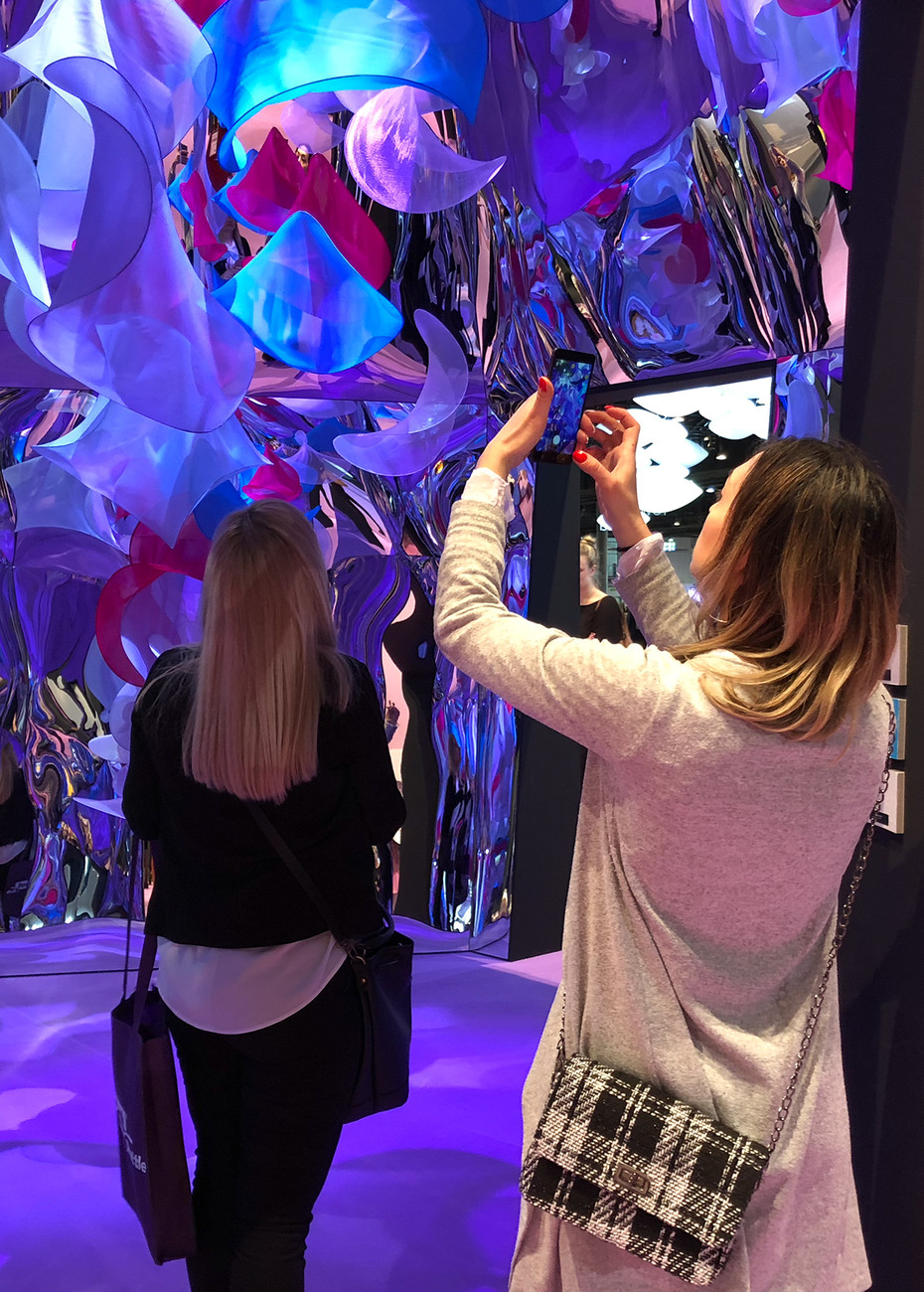 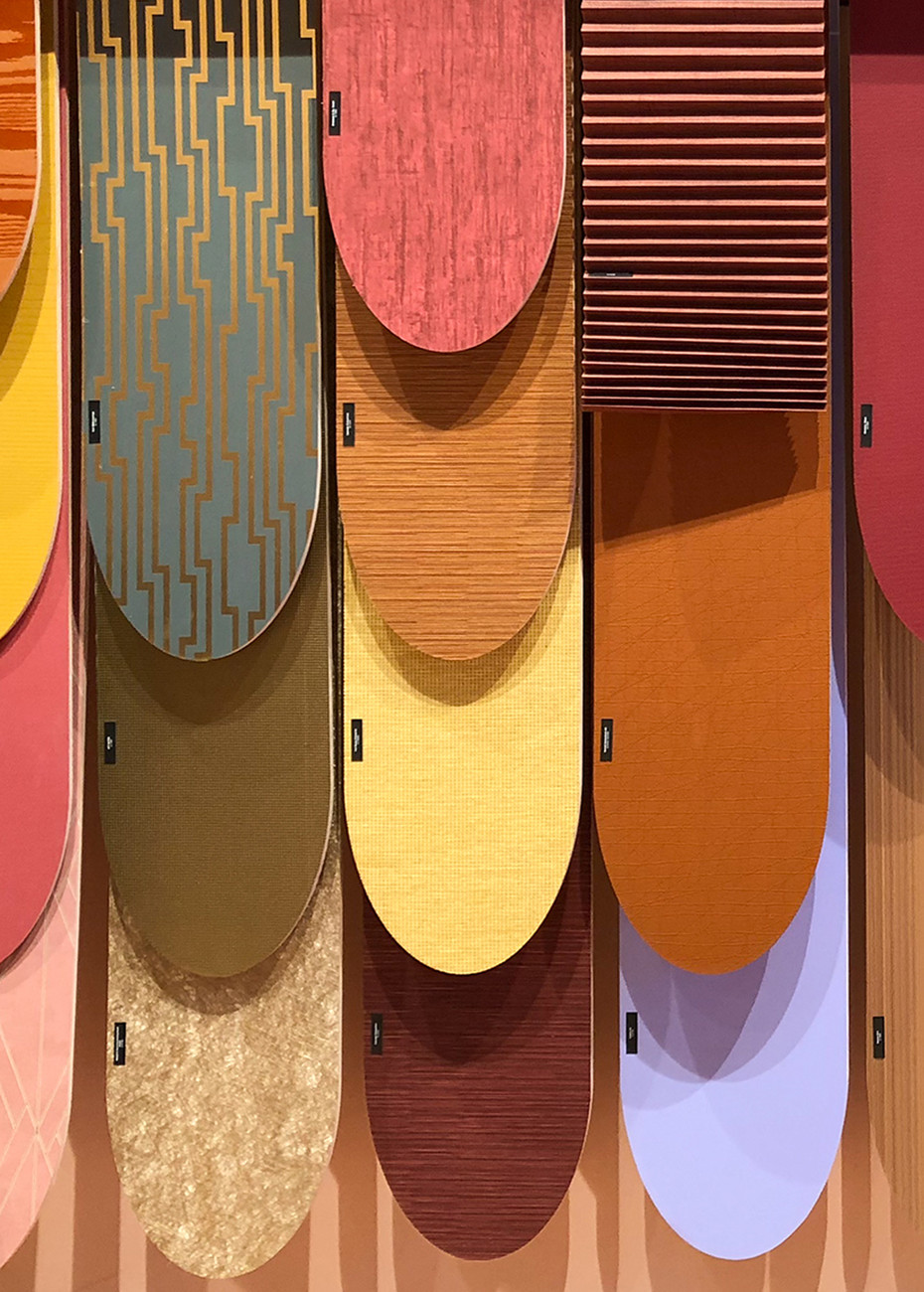 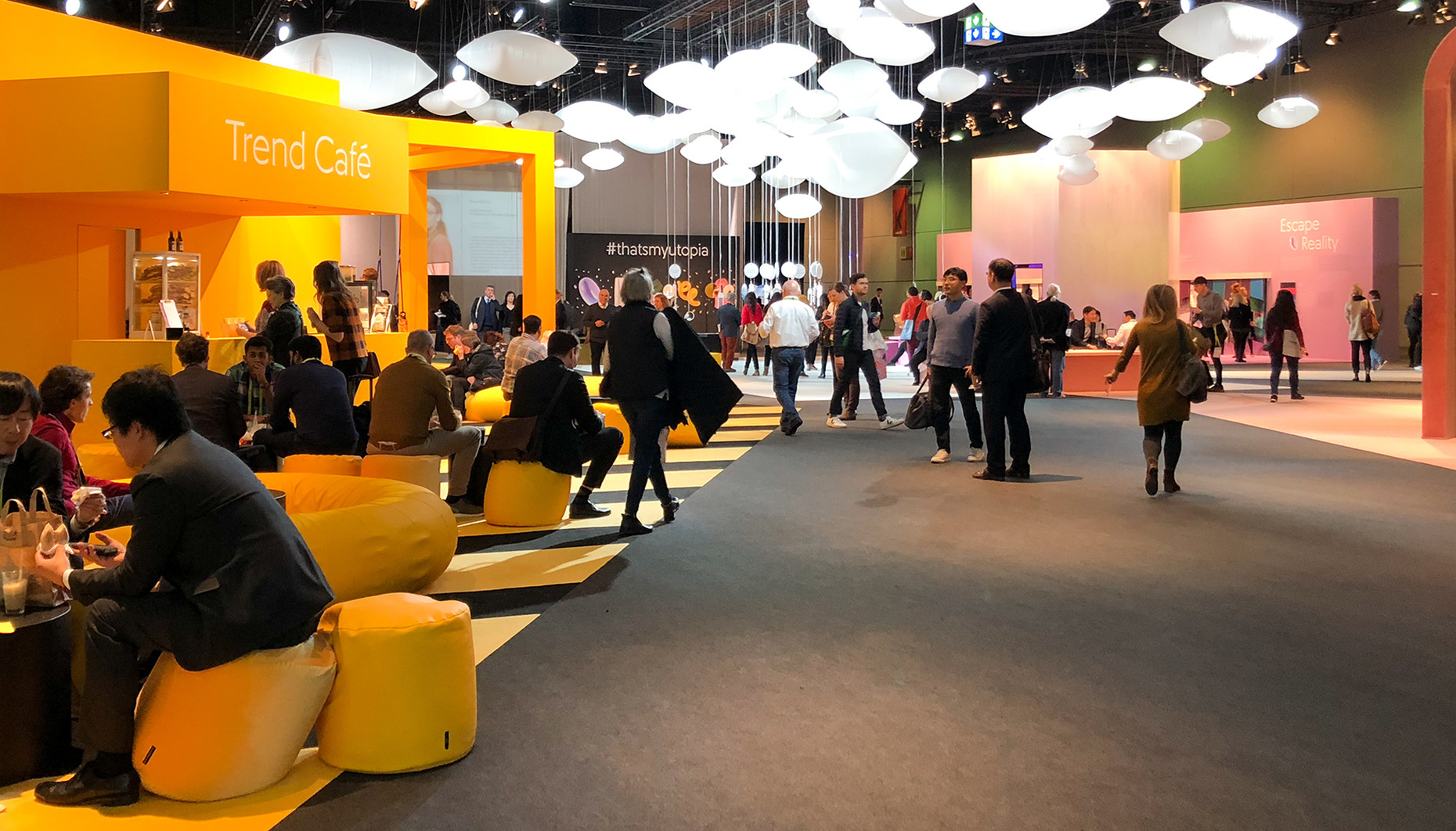 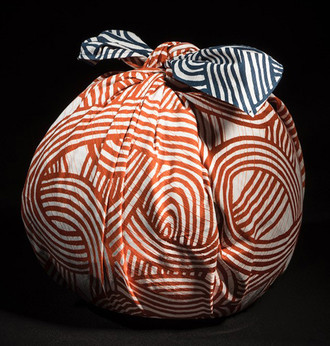 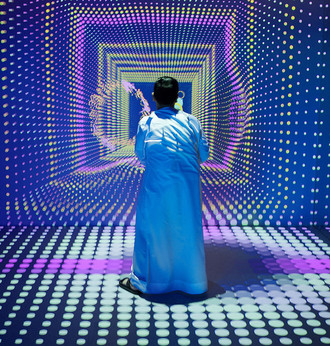 The forthcoming Heimtextil is themed as “Toward Utopia” and represents a return to fiction becoming reality for the trend space. 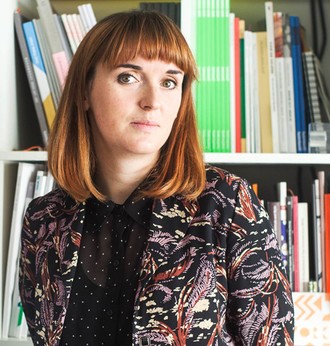 How much trend should it be?

The design of the Theme Park and Trendbook for the upcoming Heimtextil is once again in the hands of British design research agency FranklinTill. Which trend matches to whom – and how to work with it? Caroline Till in the conversation. 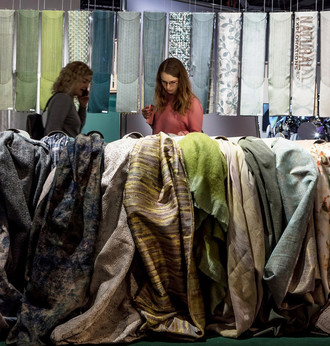 In a labyrinth of fabrics

Heimtextil 2017 casts a glance into the textile crystal ball with great fanfare – but needs to work on communicating the visions.