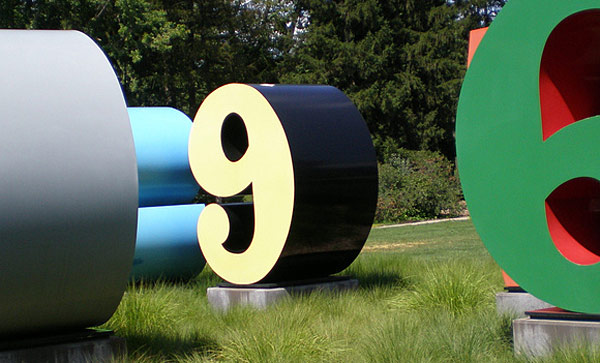 Robert Indiana; All photos by flickr.com

In the song Revolution 9 by the Beatles, from their famous 1968 "White Album", the cover for which was designed by Brit Pop artist Richard Hamilton, a voice monotonously repeats number nine, number nine, number nine, number nine.... John Lennon, Yoko Ono and George Harrison co-produced this sound collage and, in the middle of all the gibberish it reels off, fragments of sentences like "everyone of them knew that as time went by they'd get a little bit older and a litter slower but... " are perceptible. Suddenly the world of sound seems to have radically changed. John Lennon liked nine and he was delighted, that, after changing his name to John Ono Lennon, the letter ‘0' appeared nine times in his and Yoko's name combined.

What kind of a number is the number nine? What's in store for us if it is placed behind the number two and two zeros. I asked my friend Nick but he doesn't know how things will turn out either. "Don't play the prophet!", he warned me, unjustly, in my opinion. After all, what will be, will be. So let's stay with the number, that's neutral, you know what you've got: what you see is what you get!

The nine in the year 1965, as painted by Robert Indiana, is simply incredible. A plain, black number on a pale grey, rectangular canvas measuring 61 x 61 centimetres, it looks even more crooked and dented than as part of the series of "Numbers" from one to zero, where it appears, alongside the word NINE, framed by a black circle on a yellow background. And it doesn't just have a sinister look about it on typography, with its abstract yet individualist appearance.

Is this typical American pop art, catchy, youthful and positive? What happened to the "American Dreams", to which Robert Clark, who, in 1959, in a patriotic gesture, adopted the name of the US state, from then on calling himself "Indiana", dedicated a whole series of paintings? Indiana's "American Dreams" also includes a ninth painting, a rectangle on its apex, consisting of nine nines on nine canvases clasping together once more, the places and numbers of his life, love, food and death. However, it was not "nine" that made Indiana famous, the introspective, almost embryonic nine, it was the word "LOVE", which he saw before him in the Christian Science Church from his earliest childhood. It conquered the world in paintings, sculptures, screen prints, posters, wall tapestries, rugs and a stamp of which 300 million were printed.

But what is this magical nine exactly? Loud and still, ascetic and full of mystery, it steps before us, filled with tremendous physical power. When we look at it, classifications and references to pop art, colour field, hard edge and advertising graphics, are no longer of any help. It is simply there, as if ripped from the page of a calendar of the future. Eight comes before nine and, after nine, the perfect ten. In nine, something appears to be developing, without us knowing what will happen.

Christ died in the ninth hour, Troy was besieged for nine years, Odysseus travelled for nine years. The Chinese moon fox has nine tails. And who isn't delighted when they knock down all nine skittles? Nine muses accompany the god Apollo, a cat has nine lives and Hercules had to perform nine labours. But what nine actually is, even the "Neunmalkluge" [smart aleck] doesn't know. If we only knew what it has in store for us!

Robert Indiana; All photos by flickr.com 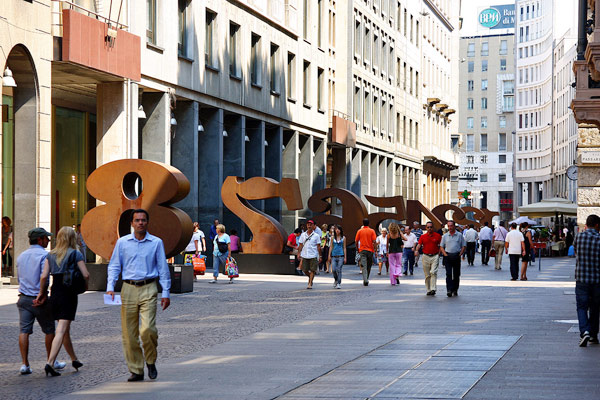