The brilliant enigmatic Mariano Fortuny was born into a family of renowned artists in Granada, Spain 1871. Altough he quickly proved talented as a painter, it soon became clear that painting was only one of his many artistic gifts!
Fortuny traveled

extensively, seeking influence from great European artists like Eleonora Duse and the austrian poet Hofmannasthal. Richard Wagner, best known for his musical compositions, but also for being a profound thinker and writer, deeply influenced Fortuny. A mee

ting with Wagner’s family in 1892, helped him to define his aesthetic ideals and introduce him into new disciplines: scenography and lighting engineering.
In that period he developed a revolutionary system for illuminating the stage trying to c

reate a complete fusion between the last music significant and the theatrical painting. He modernized stage lighting and set design by engineerring the Fortuny Dome, which employed his theories in indirect and diffused light and brought him to created one

of the first dimmer switches.
Constant curiosity made the industrious Fortuny a multidisciplinar artist, first a painter, then a photographer, an architect and inventor. He was truly a Reinaissence man who made his own photographic paper, bound his

own books, and designed his own lamps. His influence on modern life are often unrecognized, but no less immeasurable.
In 1897, Fortuny met his muse Henriette Negrin in Paris. She moved to his home and studio in Venice, the Palazzo Orfei, in 1902 and

there they set the photografic studio where some of the first nudes have beeing shooted.
With Henriette’s unremitting support, Fortuny floureshid. He enter in fashion industry in 1907, his revolutionary garments emphasized the female body in m

otion.
Soon after Fortuny began works on the textiles that are still manufactured today. The production of these textiles was a culmination of his knowledge of enginnering: color, design and art into a manifestation of pure artistic genius.
For

tuny continued his passion for fine arts until he passed away at his home in Venice in 1949. 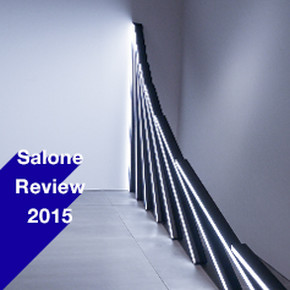 The Euroluce and the events accompanying it in Milan showed how light and luminaire makers are tackling the challenges of the electronic age: with a specific mixture in each case of tradition, technology, and private equity investors.
Advertisement