Estrangement of the familiar

The two architectural firms of Young & Ayata and Michan Architecture joined forces to design a residential building in Mexico City. The result features an expressive concrete façade that provides for subtle agitation.
by Alexander Russ | 3/3/2021

How can you bring light into all four sides of a building when it is lodged between two other buildings? It’s easy: You just undercut the boundary lines. That’s what happened with a four-story residential building in Mexico City designed by Mexican architect Isaac Michan Daniel of Michan Architecture in cooperation with the New York-based architecture firm Young & Ayata. On a site hemmed in between two detached houses with the option to exceed them by one story, the architects decided to set their design back somewhat from the existing buildings in order to ensure sufficient distance in future. The recessed nature of the building also meant approval of an additional story, which compensated for the original loss of floor space.

Alongside the distinctive exposed concrete façade, the large, incised windows in particular define the appearance of the apartment block. “In order to allow light, view, and ventilation to all sides of the building, a scheme was developed to manipulate the windows into something familiar yet subtly strange,” says Kutan Ayata, one of the two partners at the New York firm. The architects describe their approach as “estrangement of the familiar”, whereby they aimed to evoke subtle agitation. The large windows that pick up on the floor divisions of the building on the one hand, and on the other form an expressive counterpart to regular board-marked concrete lend the façade a spatial depth that results from its irregular geometry.

The 22 rectangular openings in five different sizes are cut into the façade like notches, creating both a sculptural and a two-dimensional impression within the neighborhood. Hence the windows, with their large, trapezoid glass surfaces, appear somewhat recessed in the concrete façade and at the same time curve outwards like oriels – as if the concrete were pulling against them. Here, the curved lines likewise give the building a certain suppleness, while also supporting the raw plasticity of the form. In the interior, meanwhile, the different angles of the windows provide for overlapping perspectives, whereby it is possible to look inwards and outwards from the apartments at the same time. The result is a versatility that generates a certain spaciousness in the seven apartments despite their conventional floor plans and small rooms. In order to enhance the sense of alienation, the architects designed the apartments with their white internal walls to contrast with the raw formwork of the façade. Only at the incised window openings do the raw concrete and the rendered interiors come together in one fluid movement. Here, the structured grey exterior contrasts with the light, smooth walls of the interior, lending the building a further element of complexity.

Alongside the approach of alienation, the body of work by the architect and engineer Félix Candela, known for his lightweight concrete shell structures, also had a direct influence on the design process. Kutan Ayata describes it as follows: “We had a chance to see several of his projects up close on trips to Mexico and both the construction techniques and the different aesthetic effects that the casting left on the surfaces. It was interesting to see when and how decisions were made that had as much to do with the final appearance as with the pragmatics of construction.” In contrast to Candela’s delicate supporting structures, however, the apartment building appears pretty solid. Rather, it scores points for its creative efforts towards finding new forms of expression in the geometry of its design and the subtle agitation it brings to the urban space. 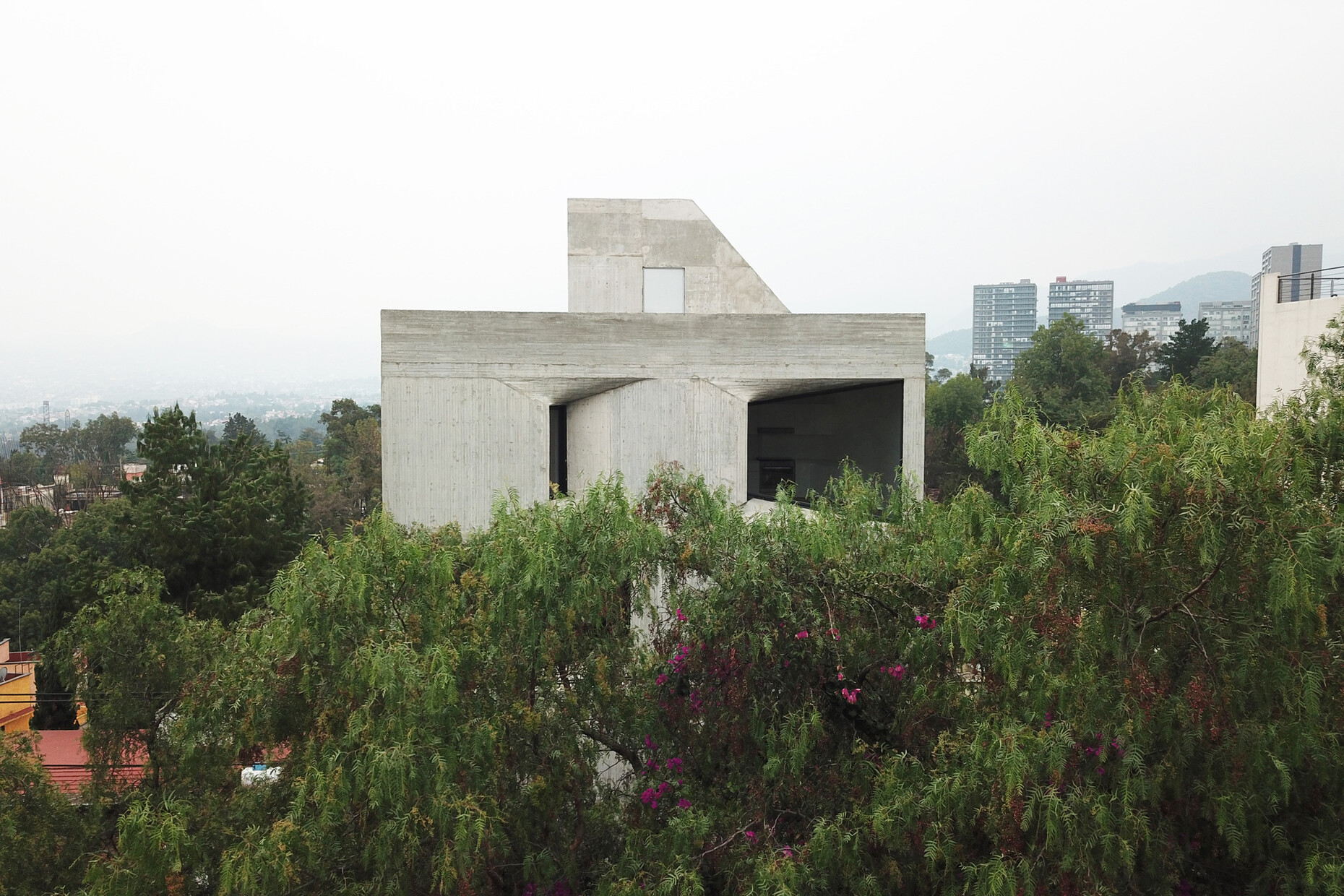 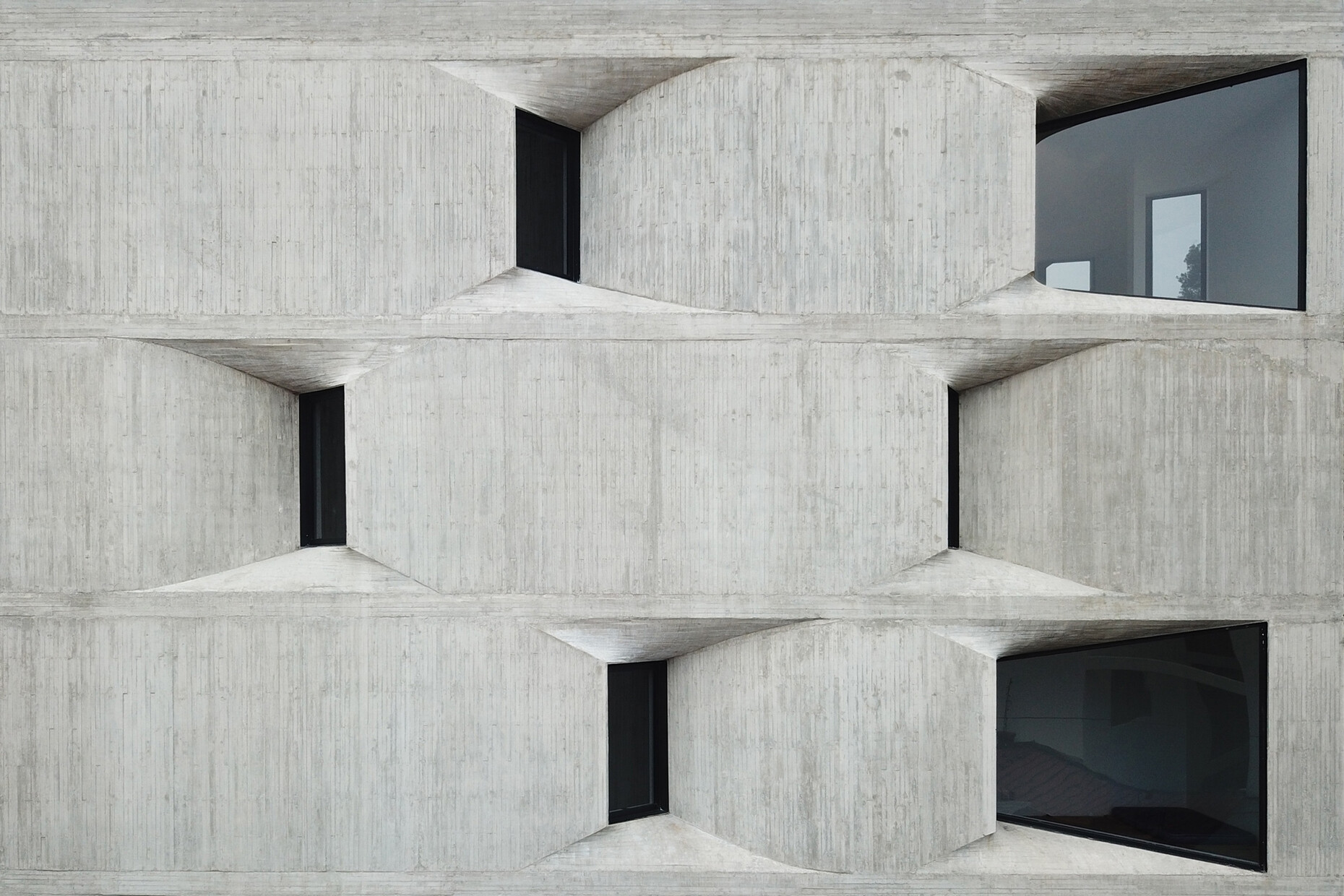 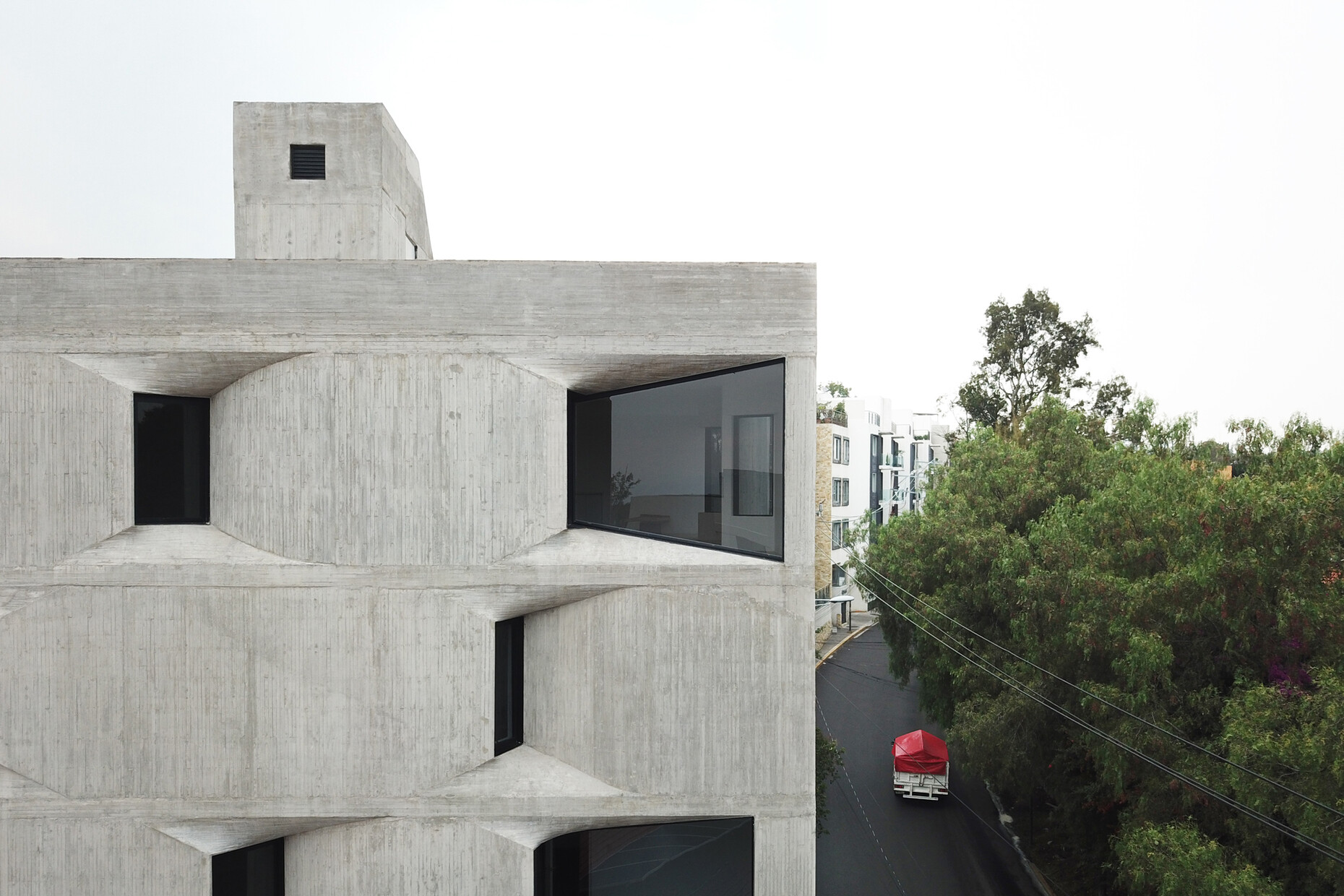 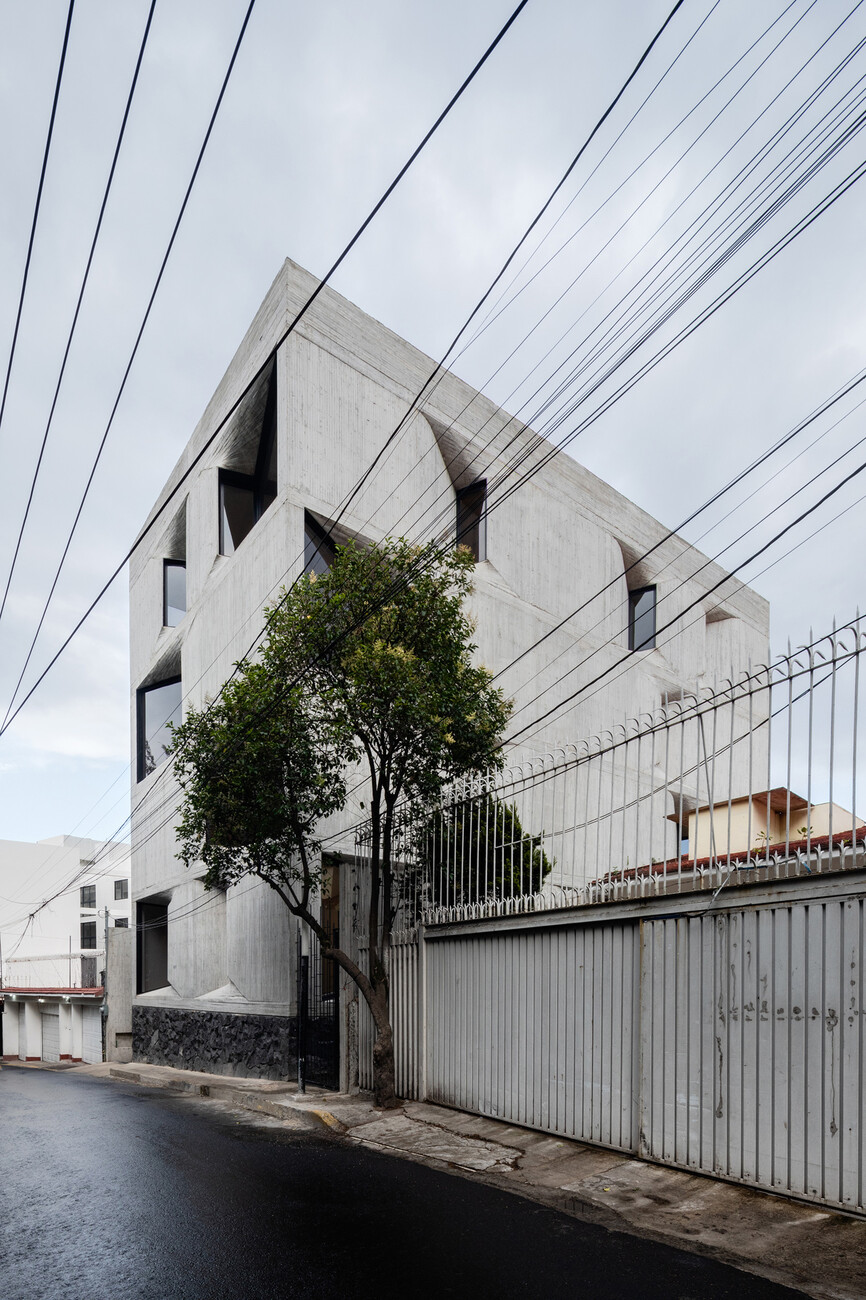 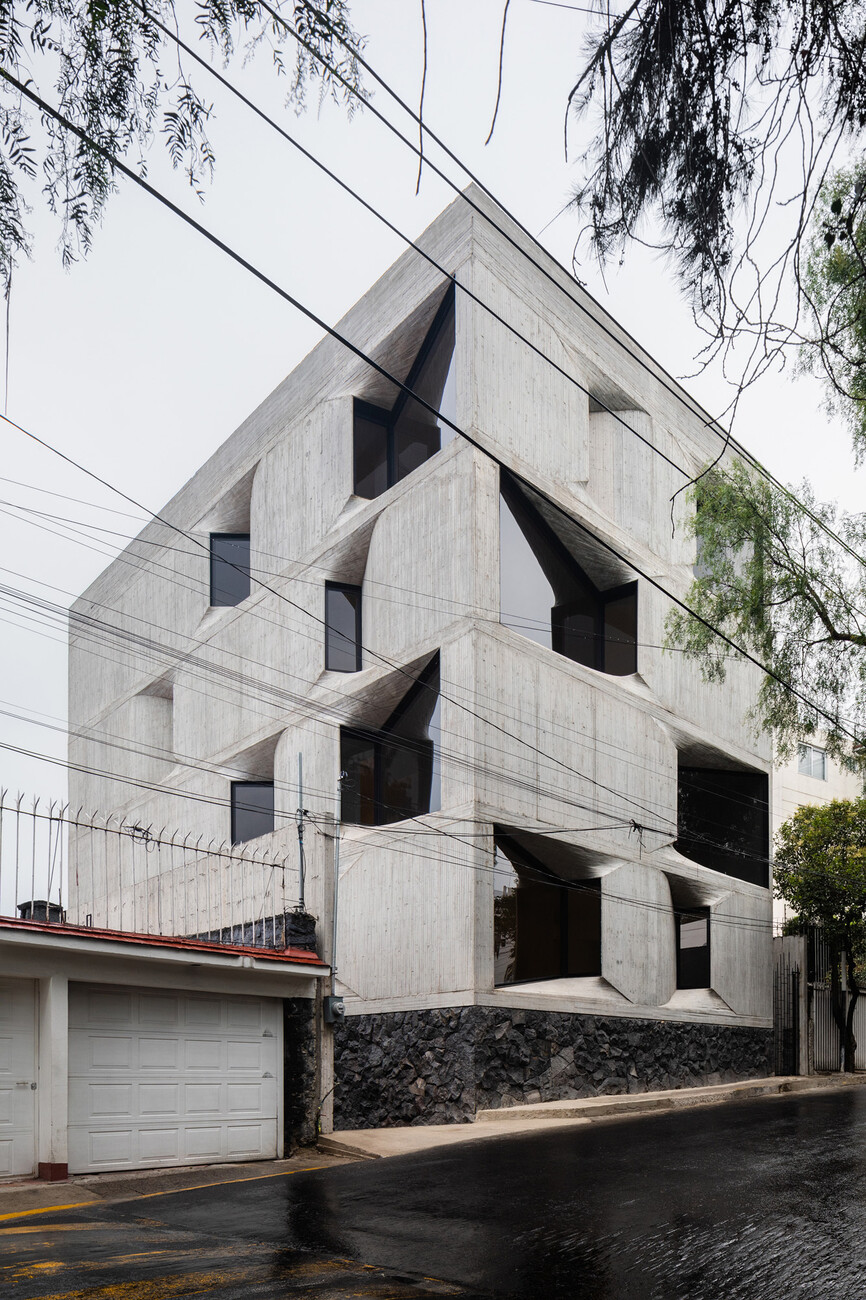 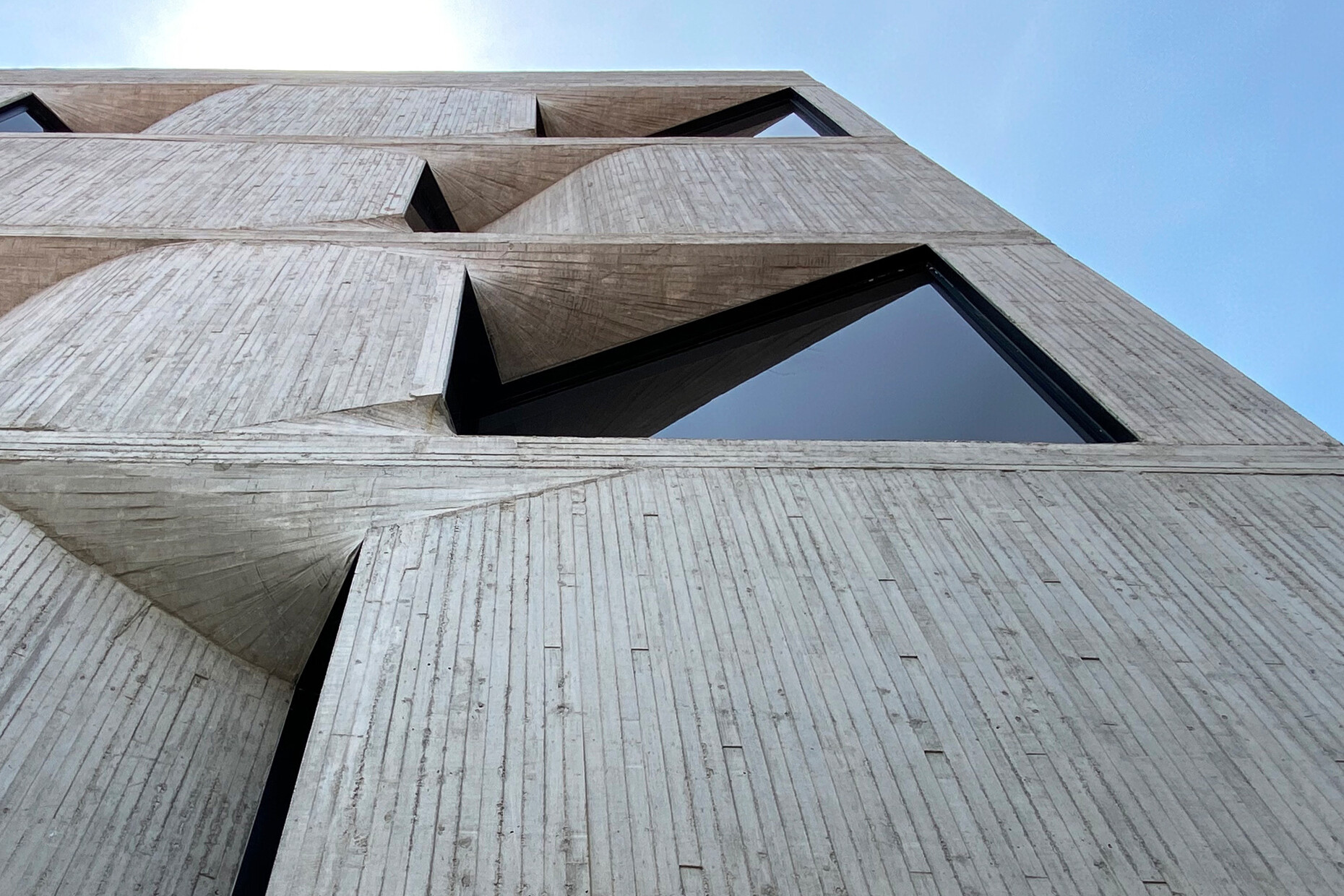 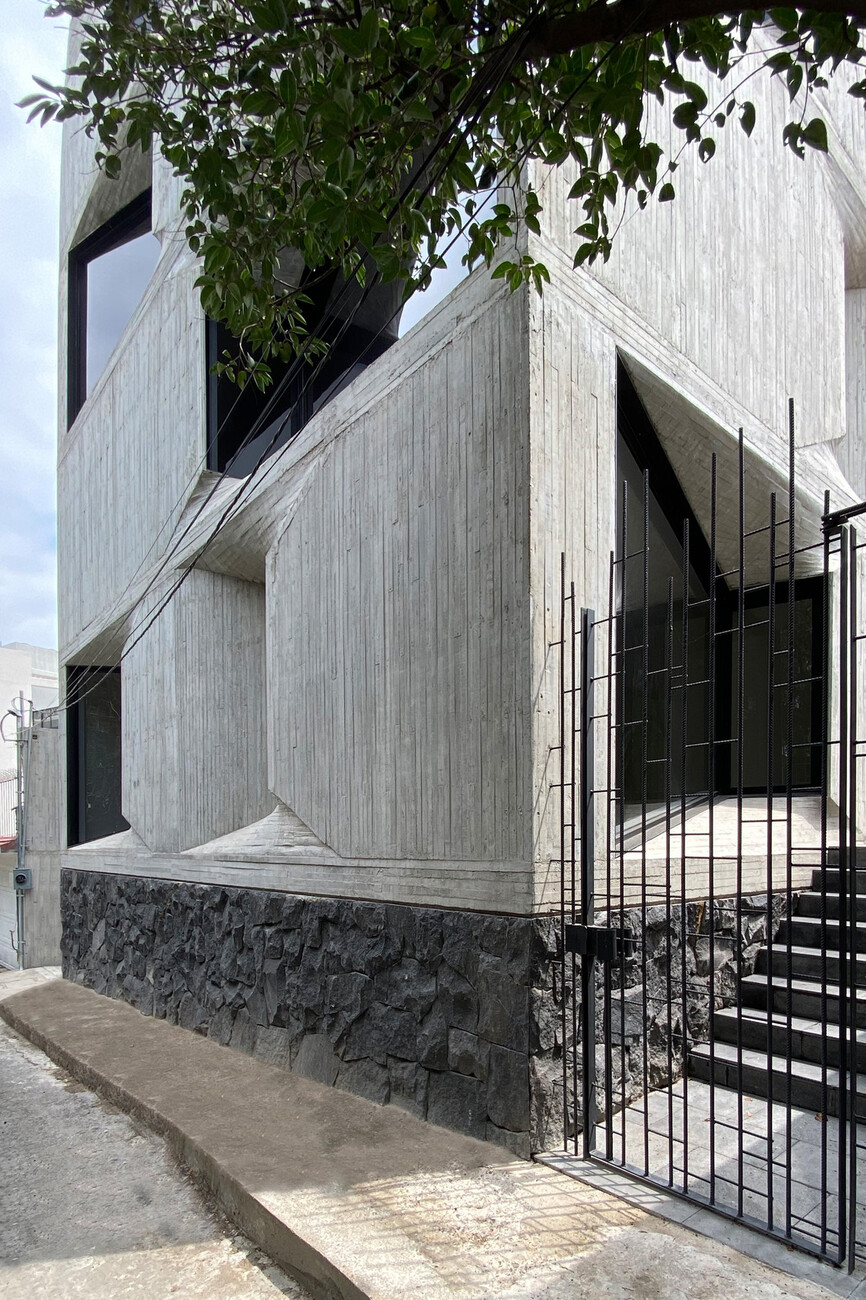 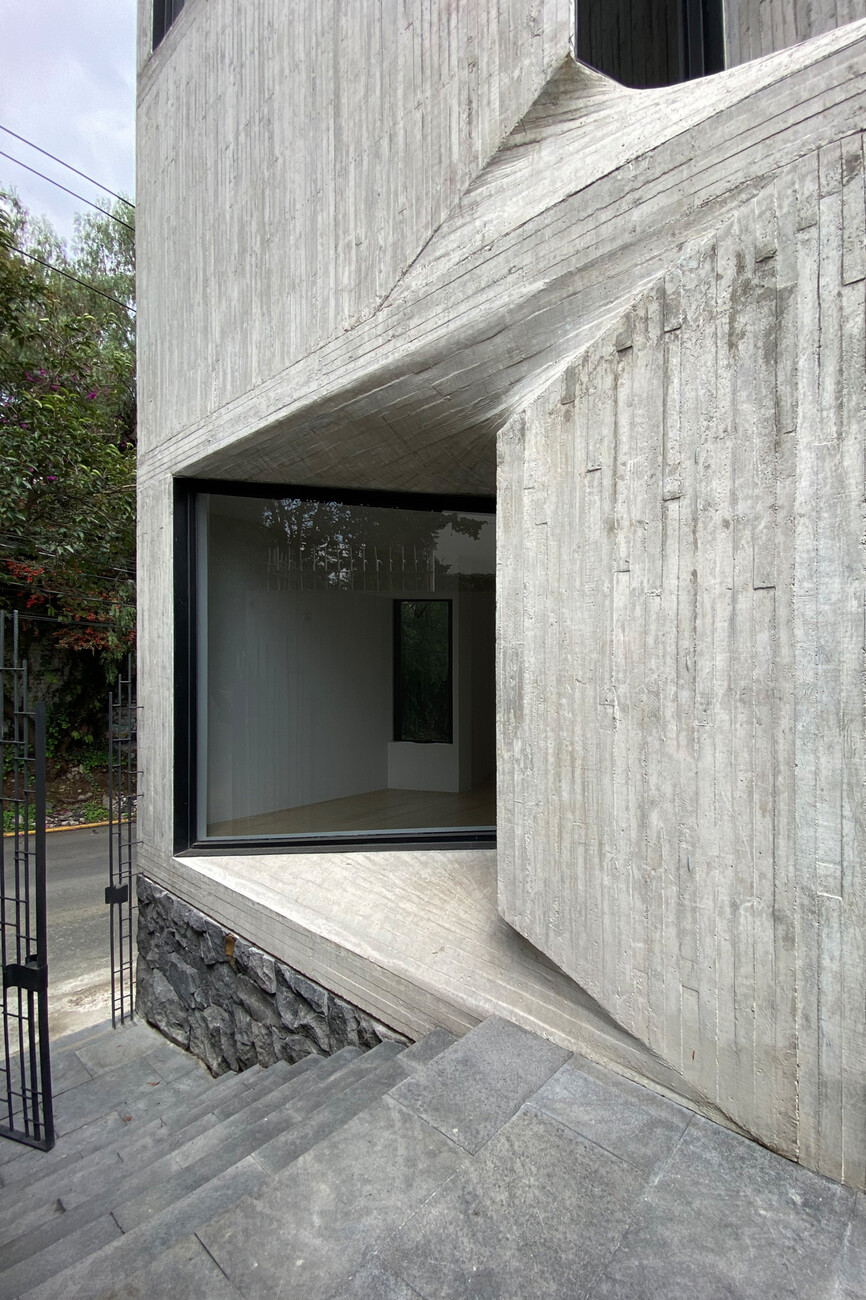 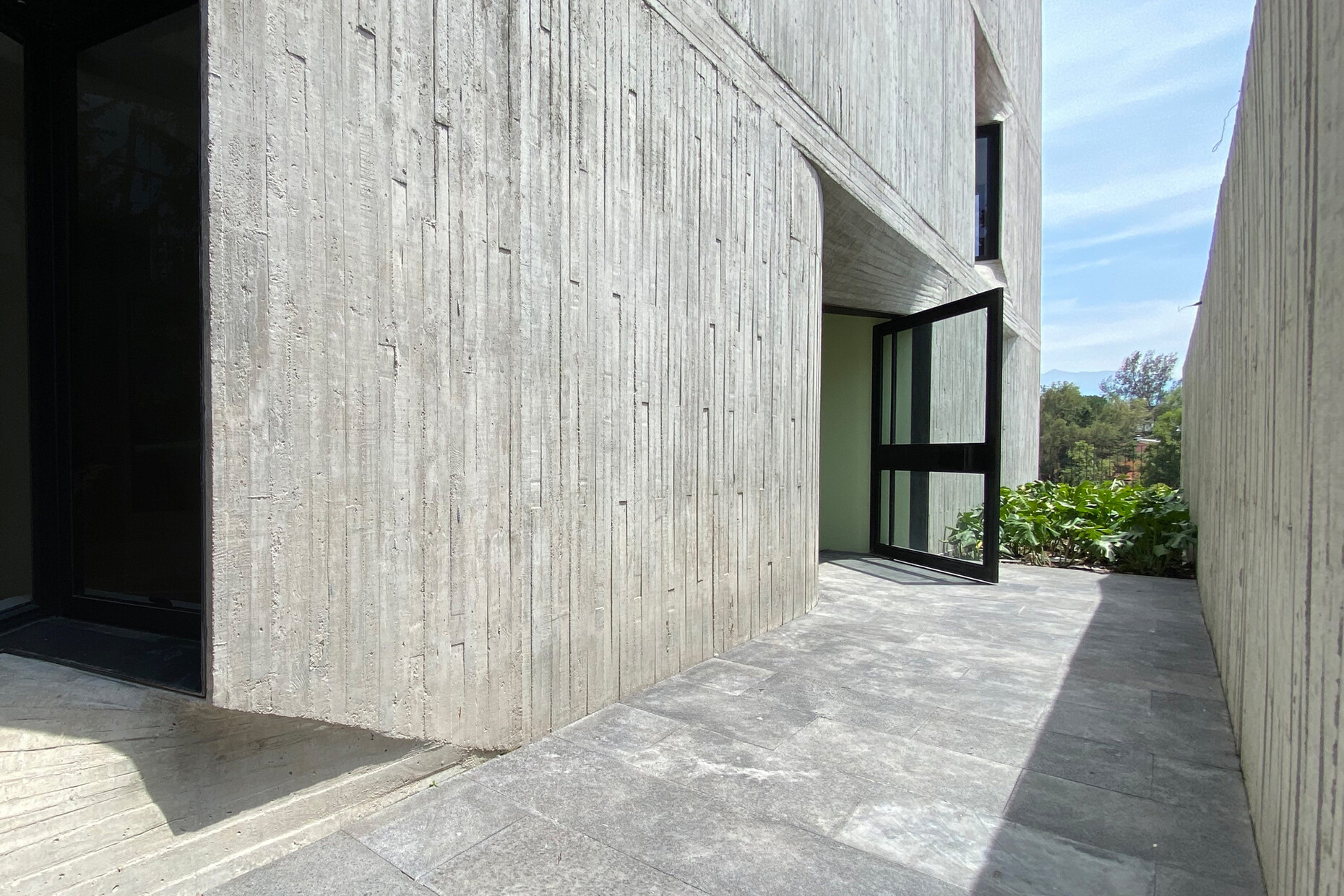 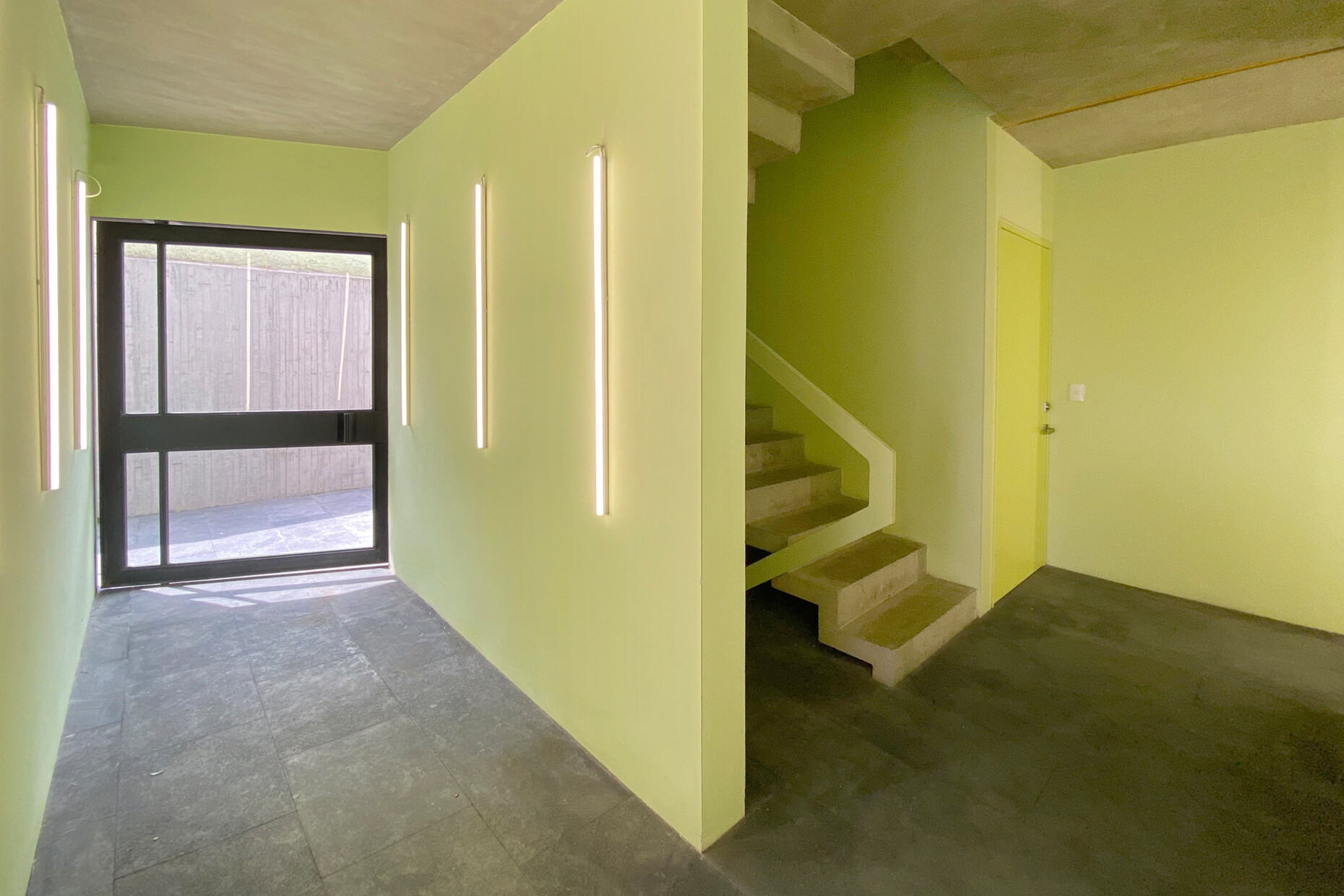 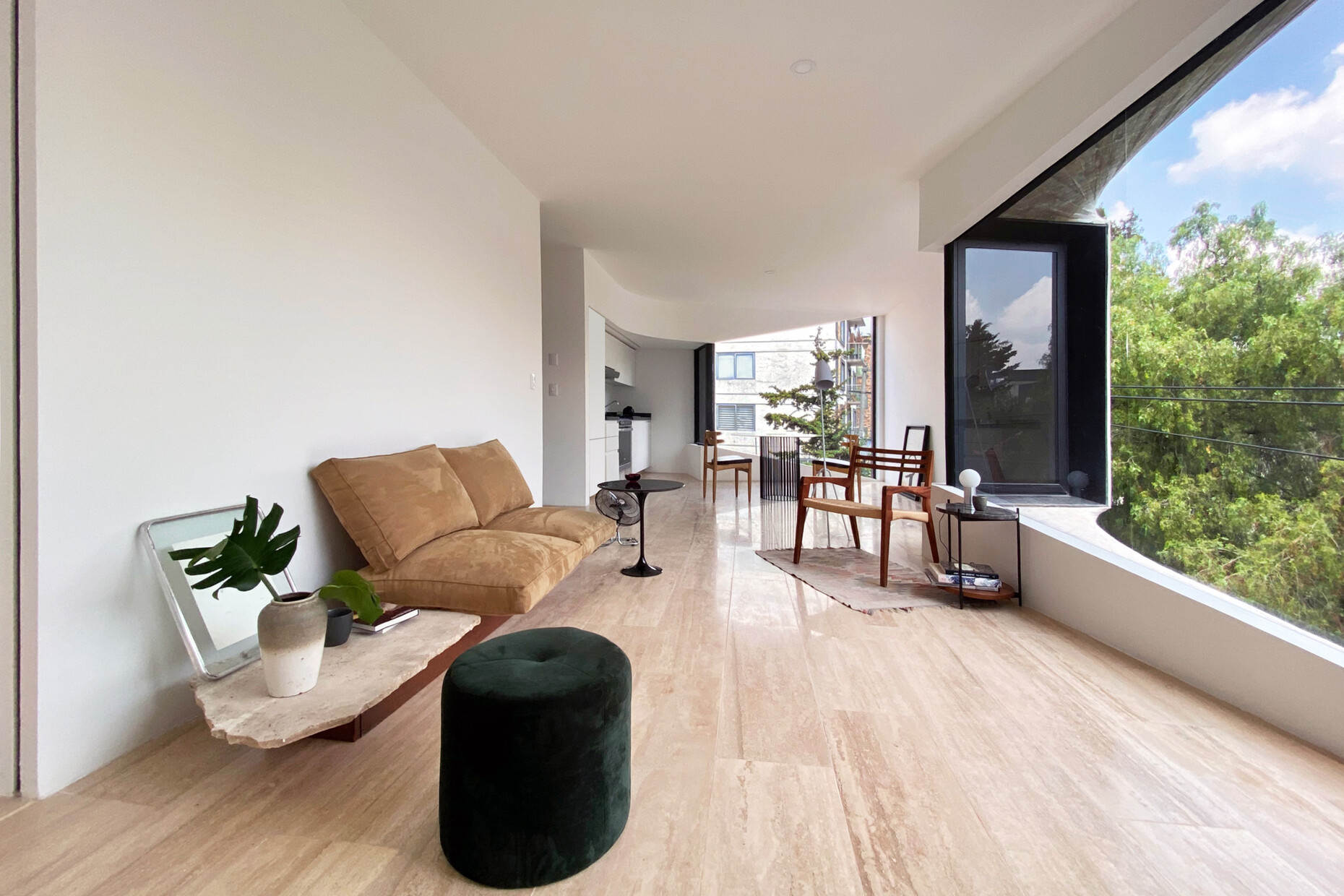 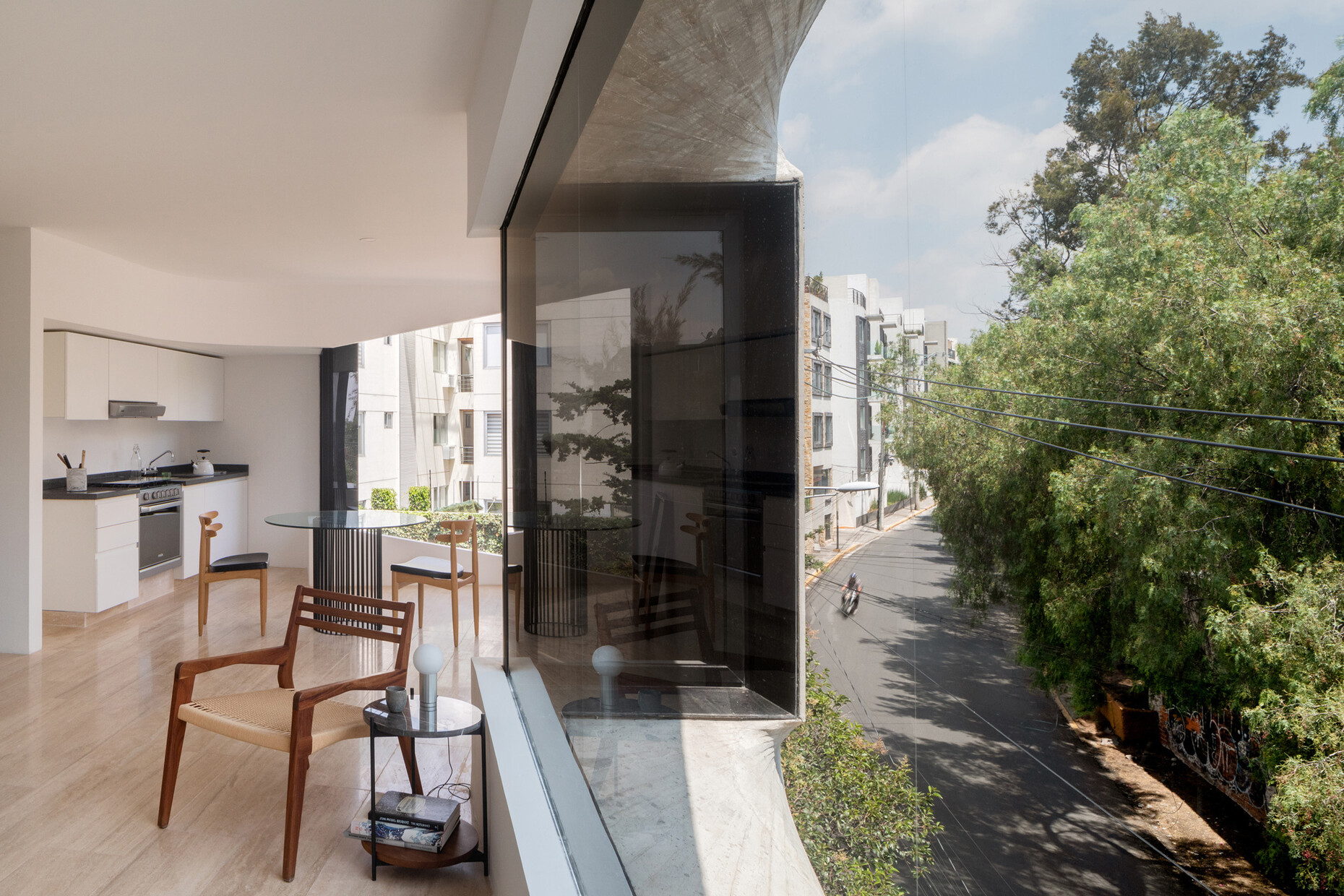 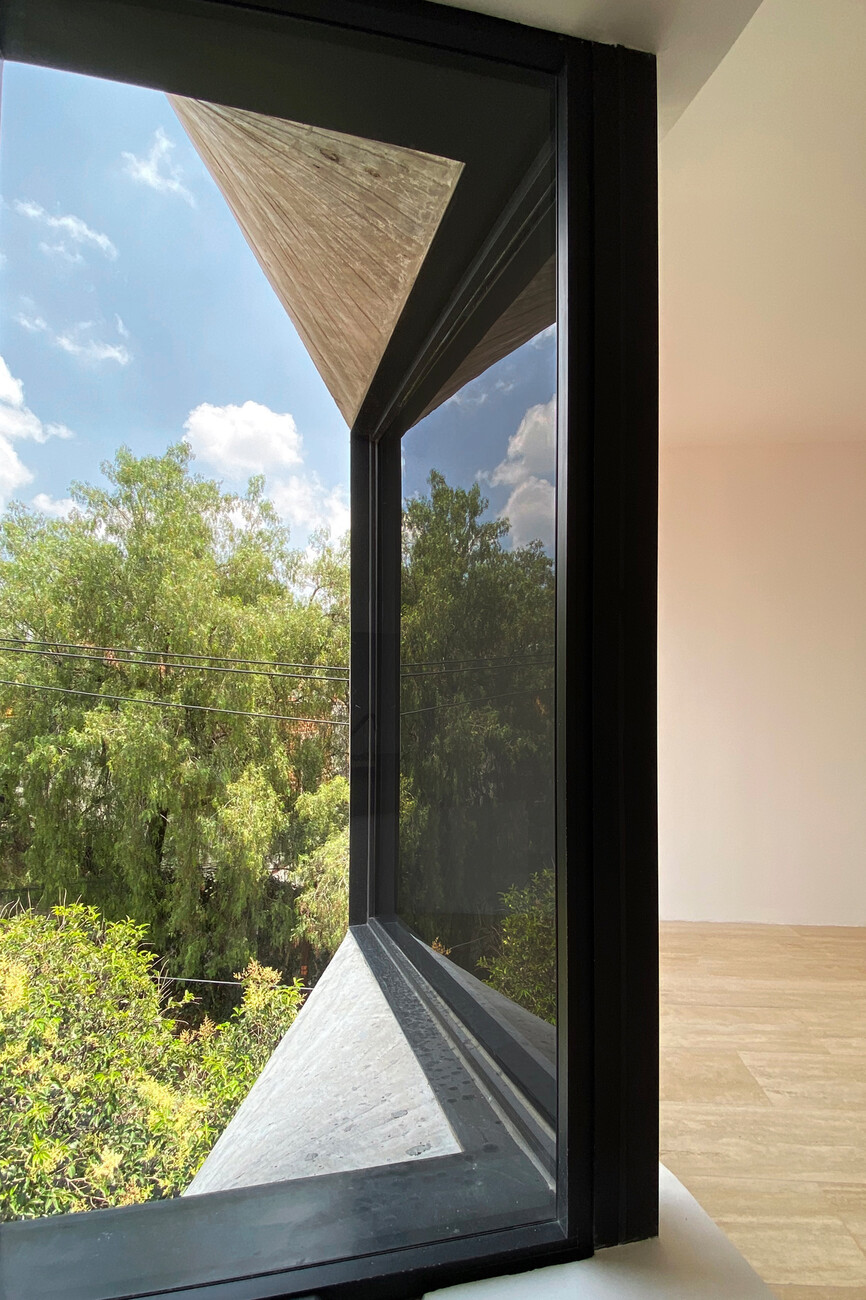 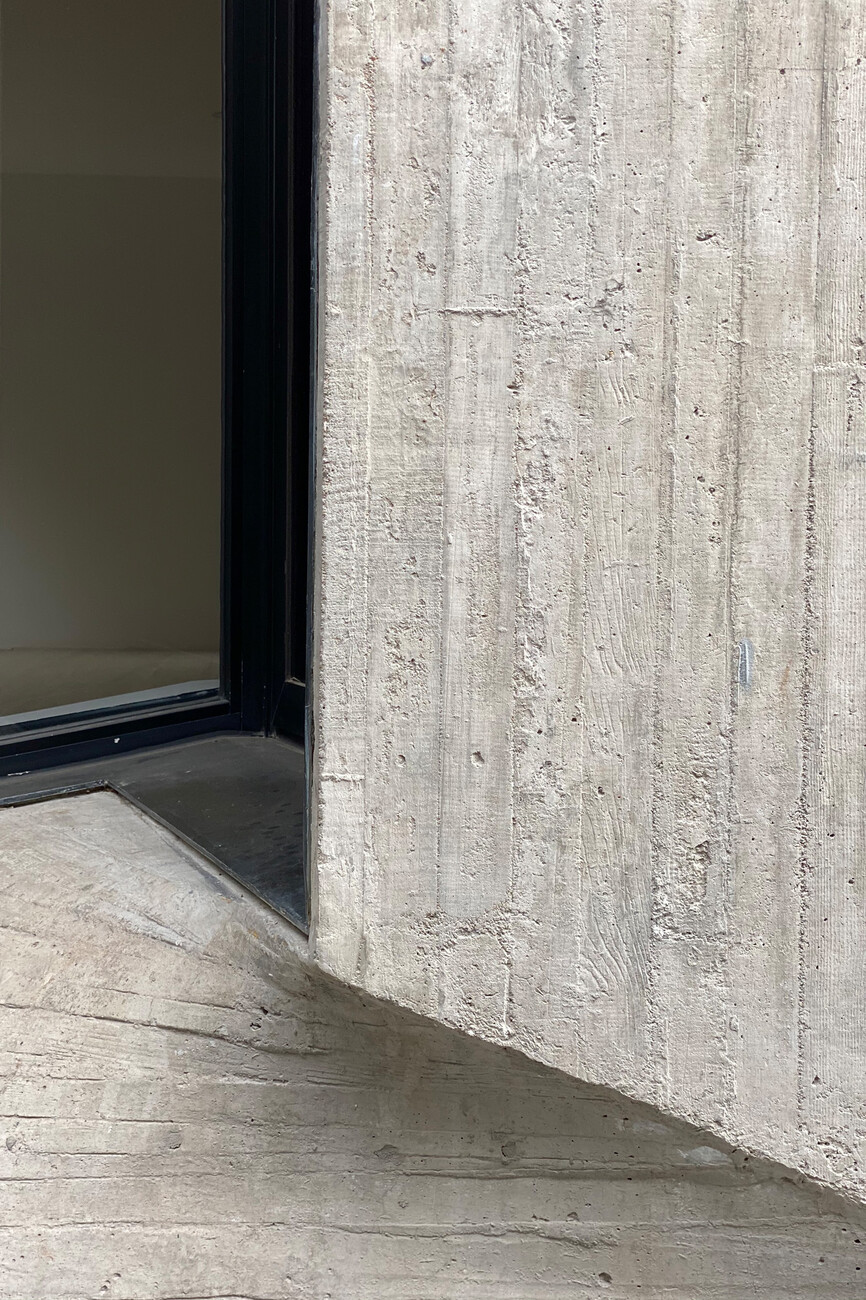 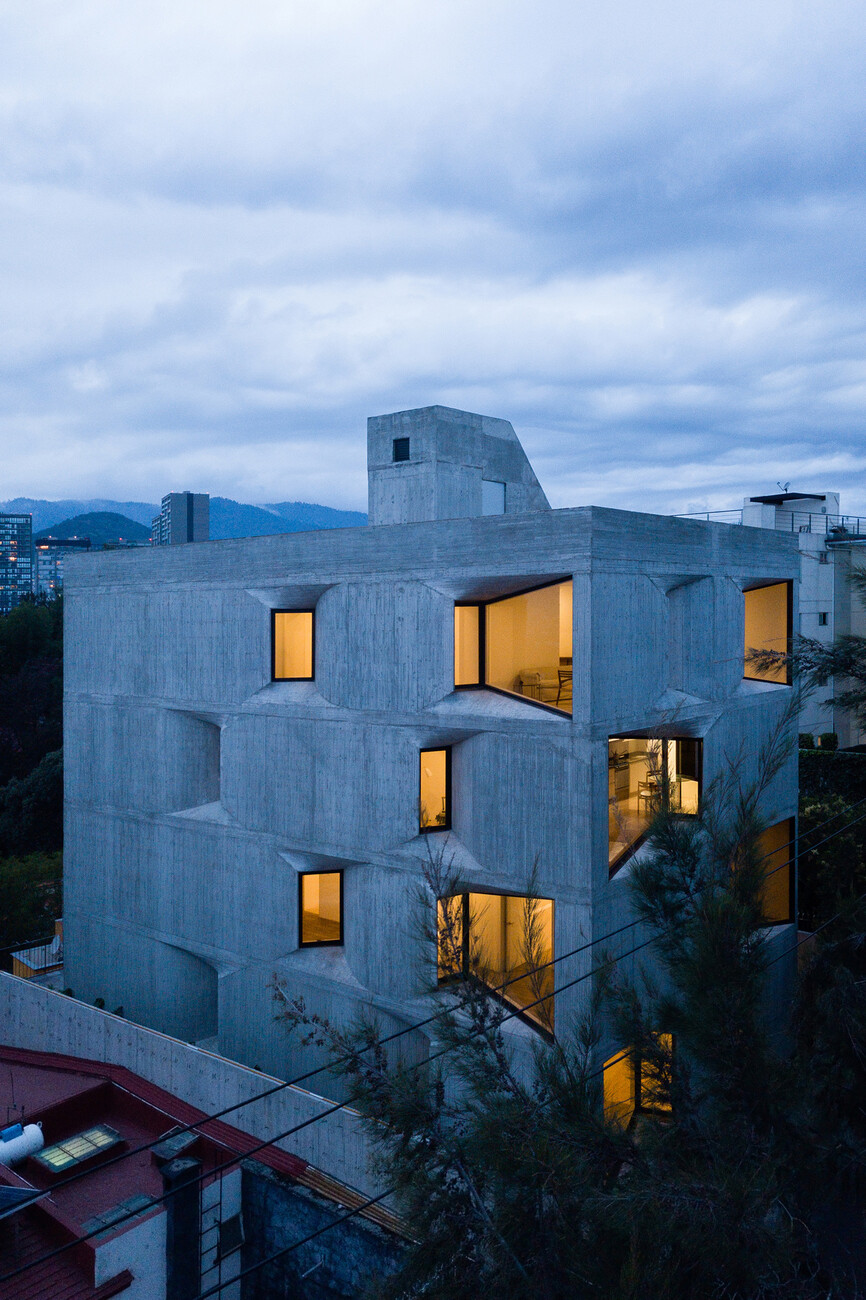 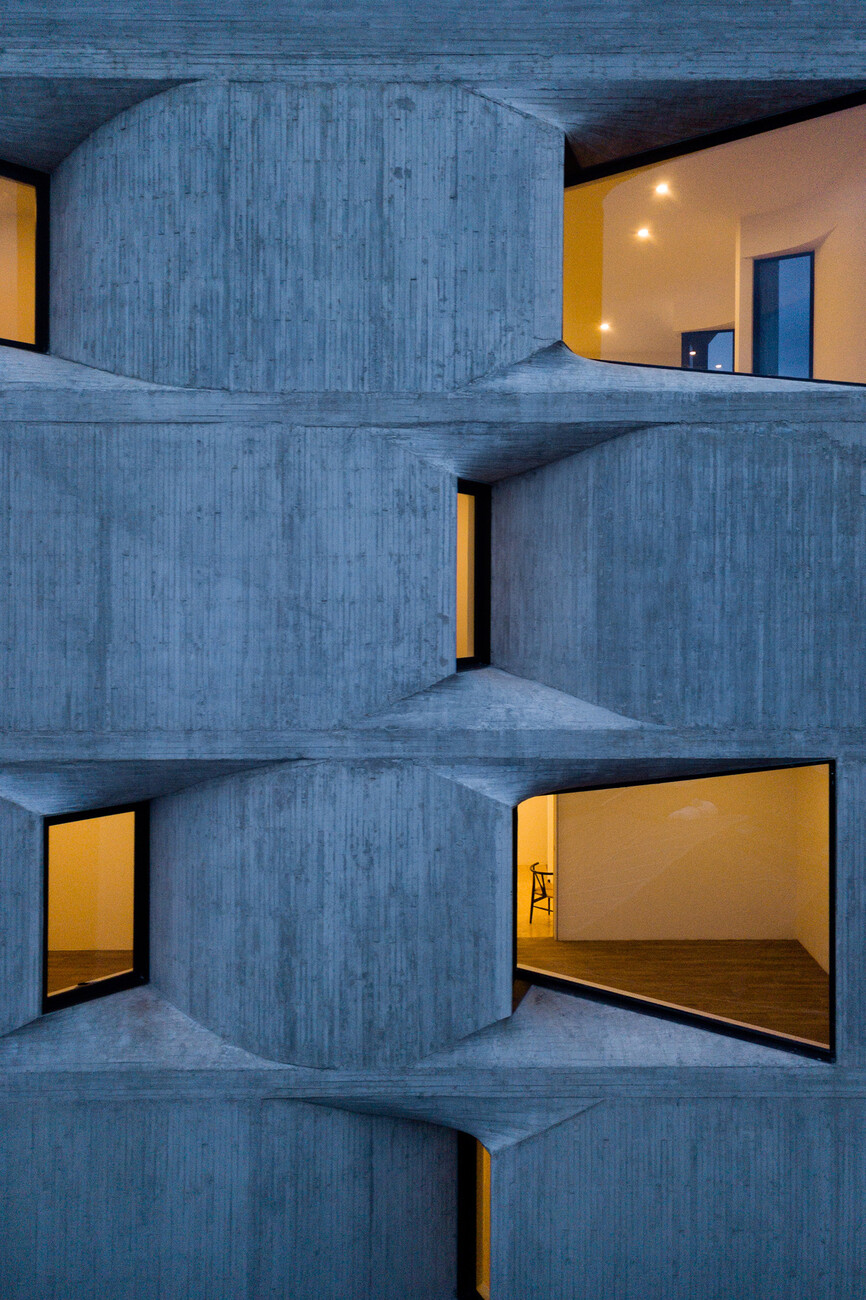 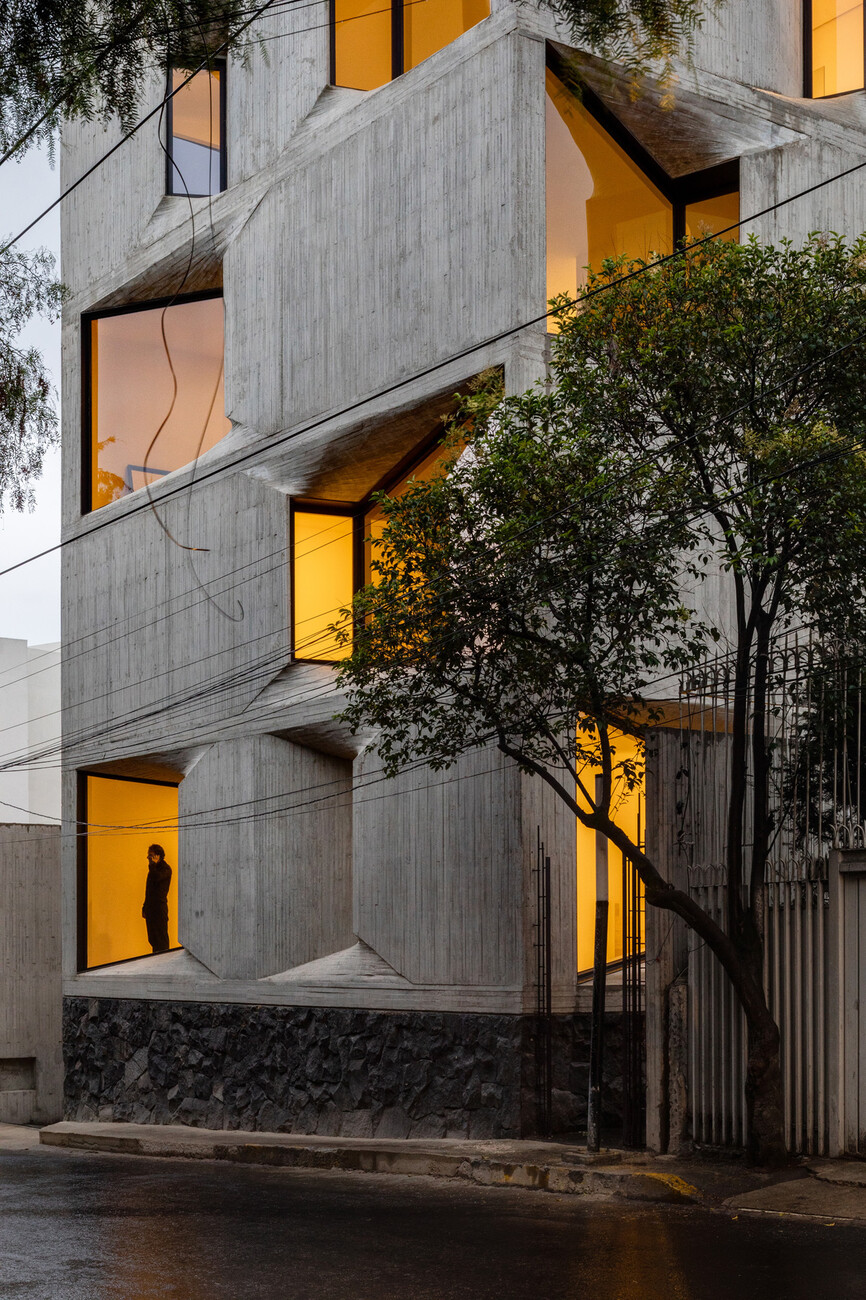 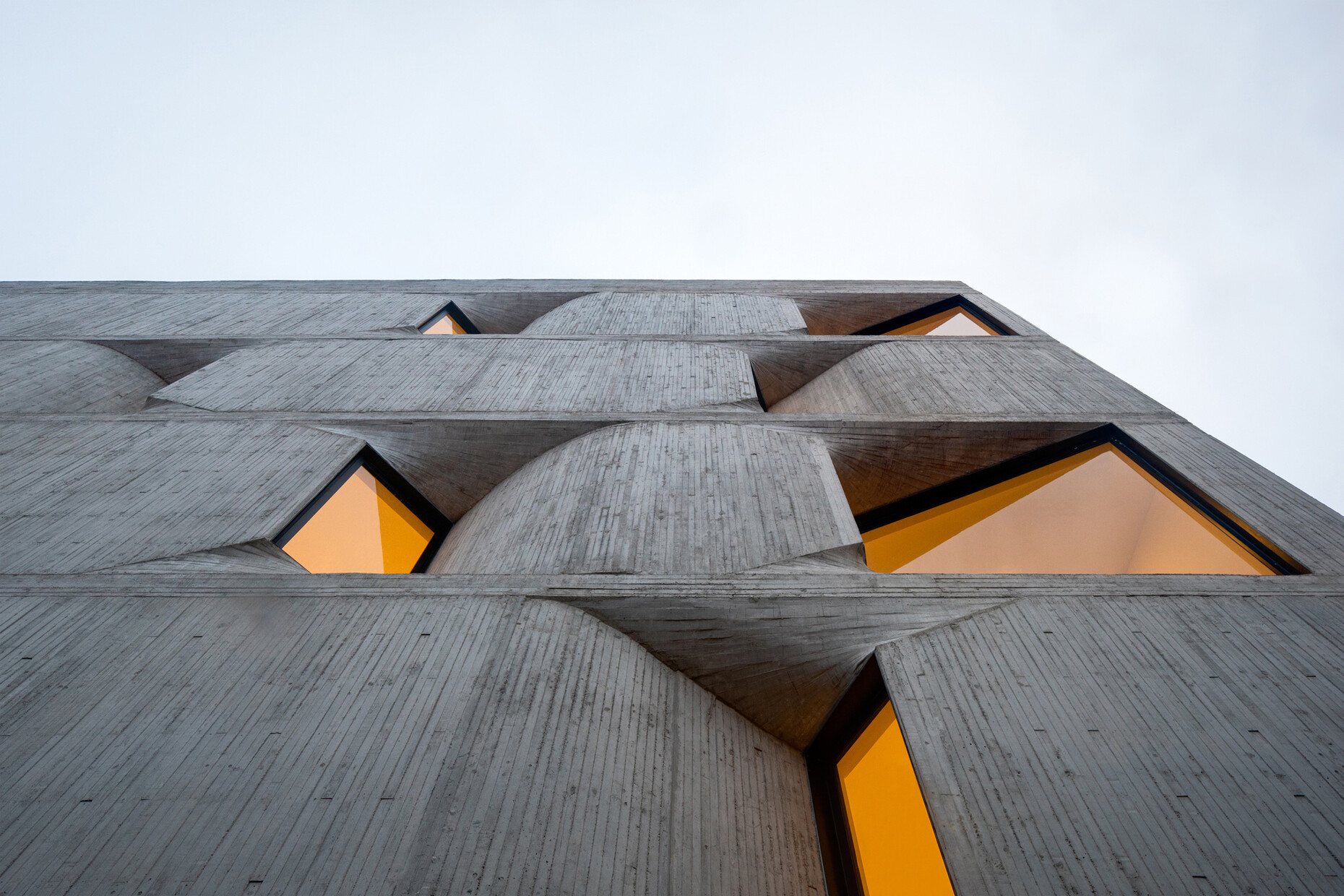 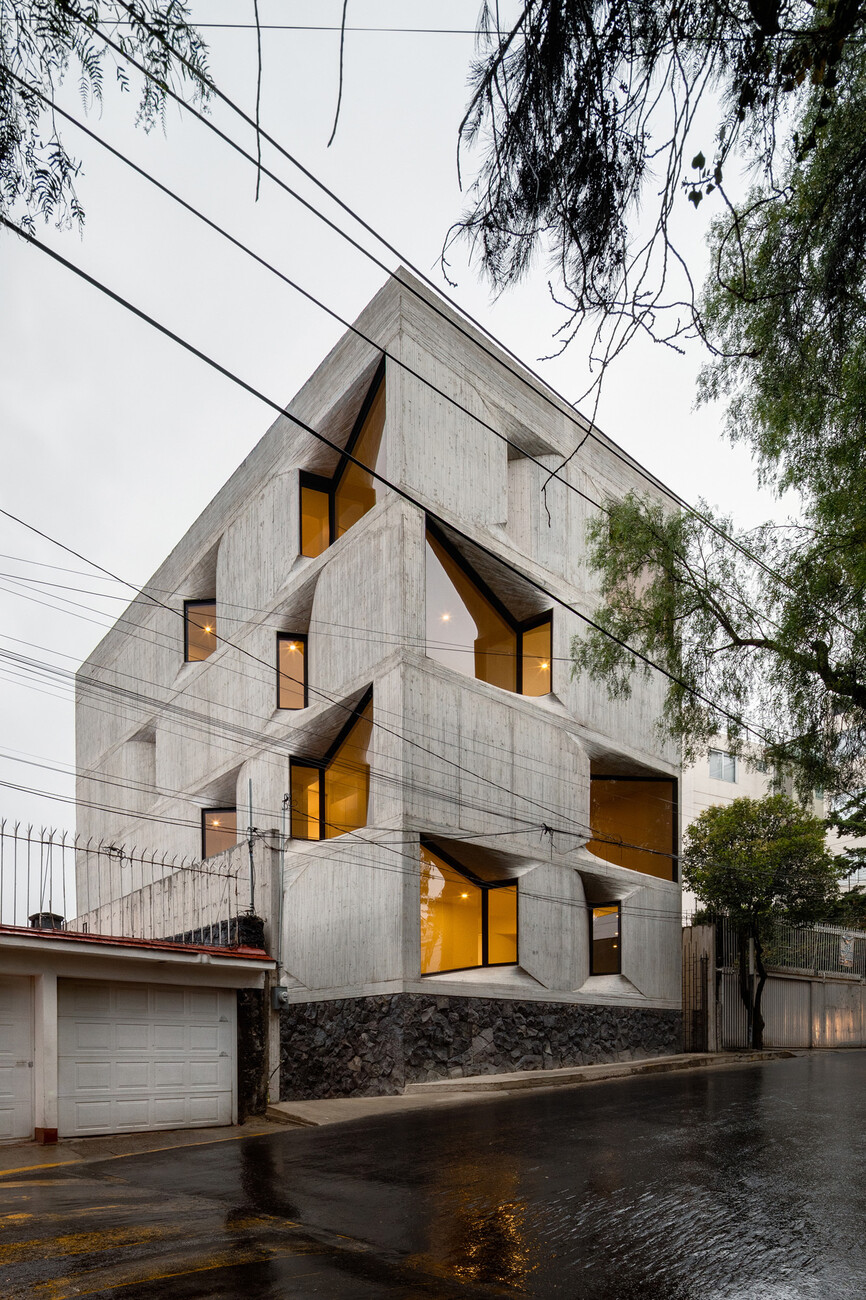 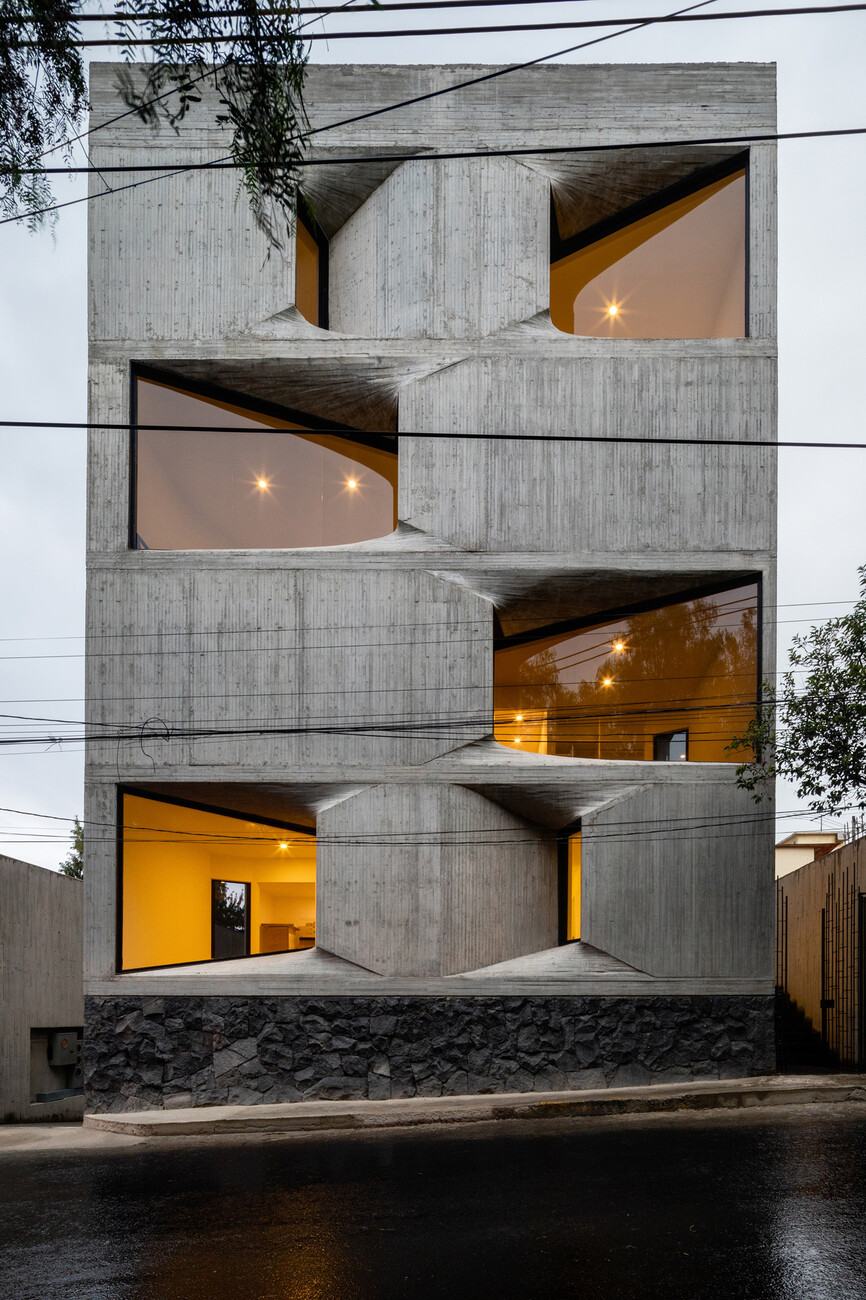 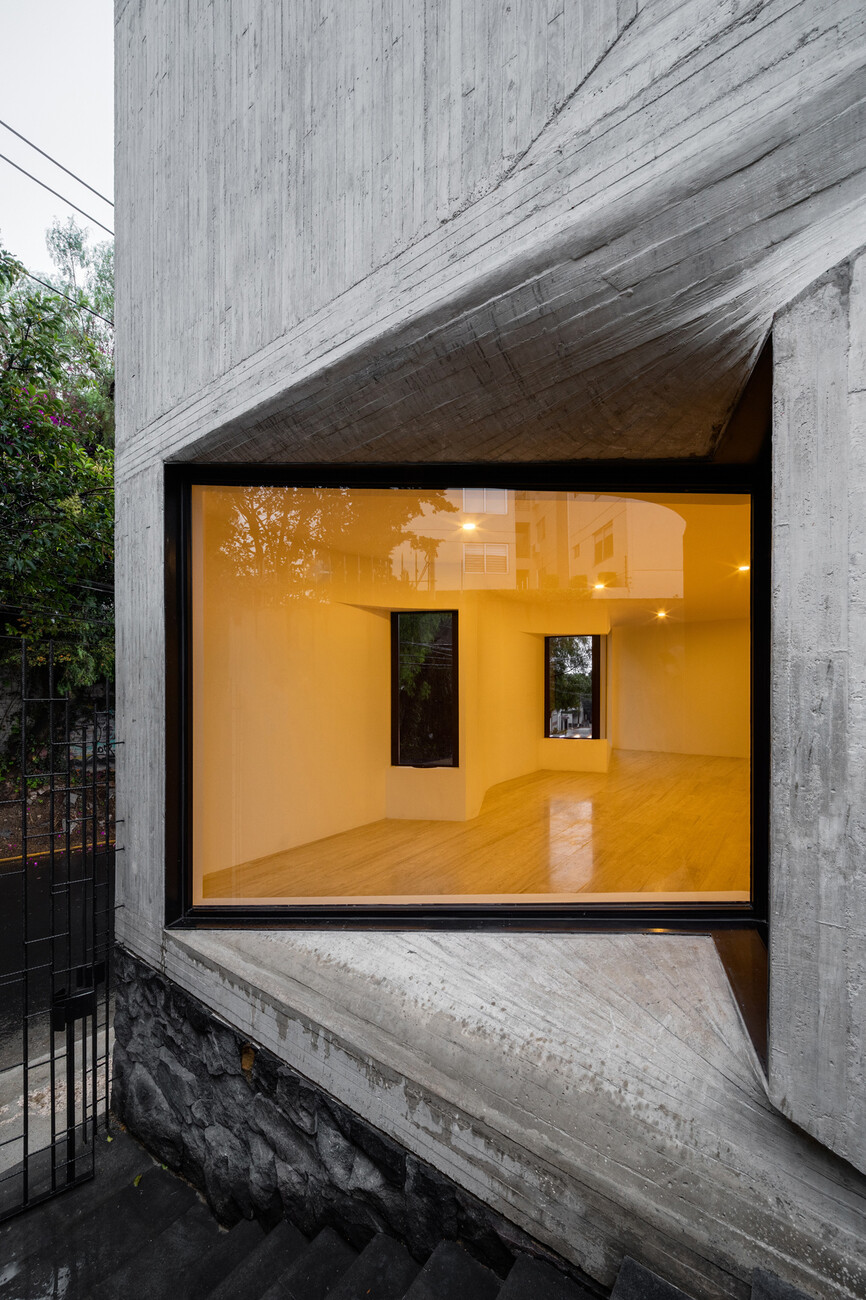 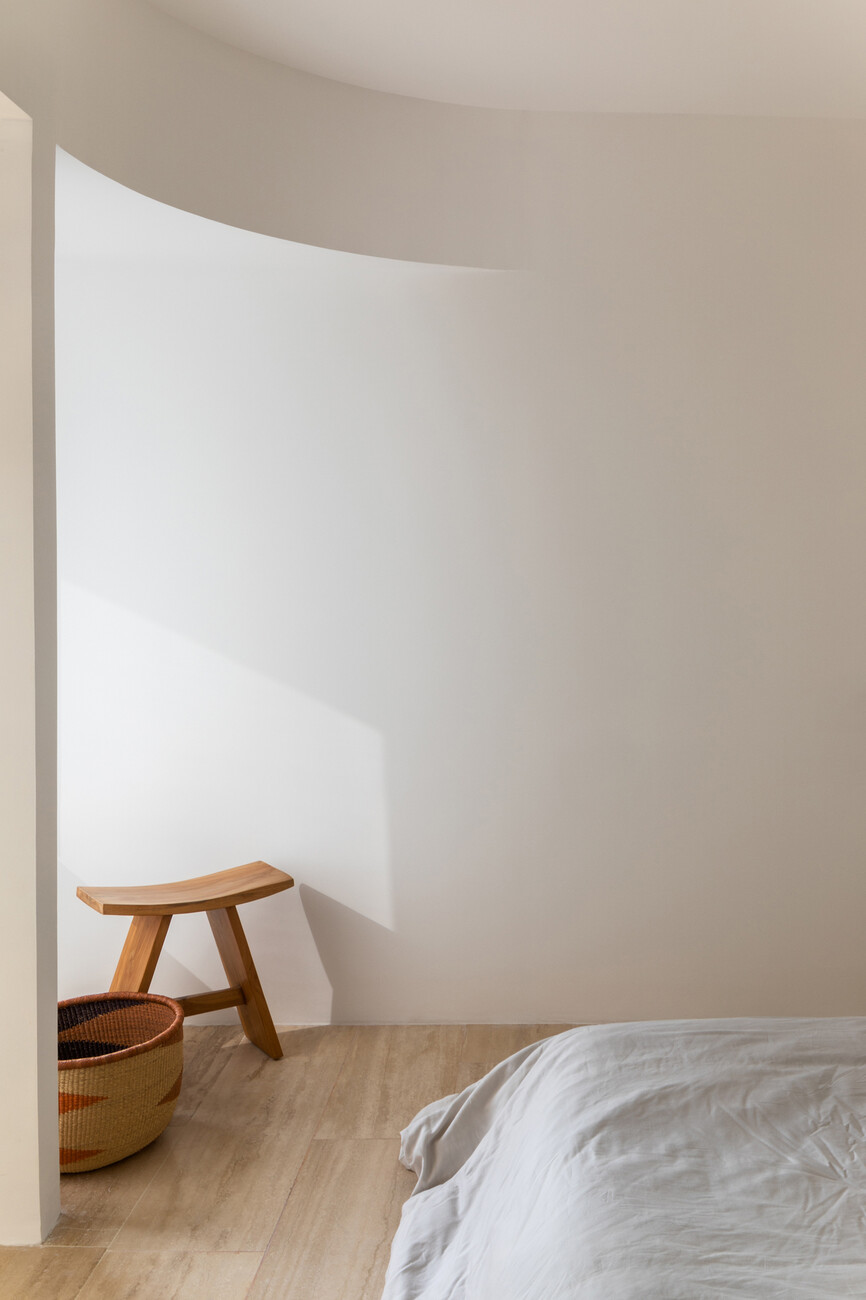 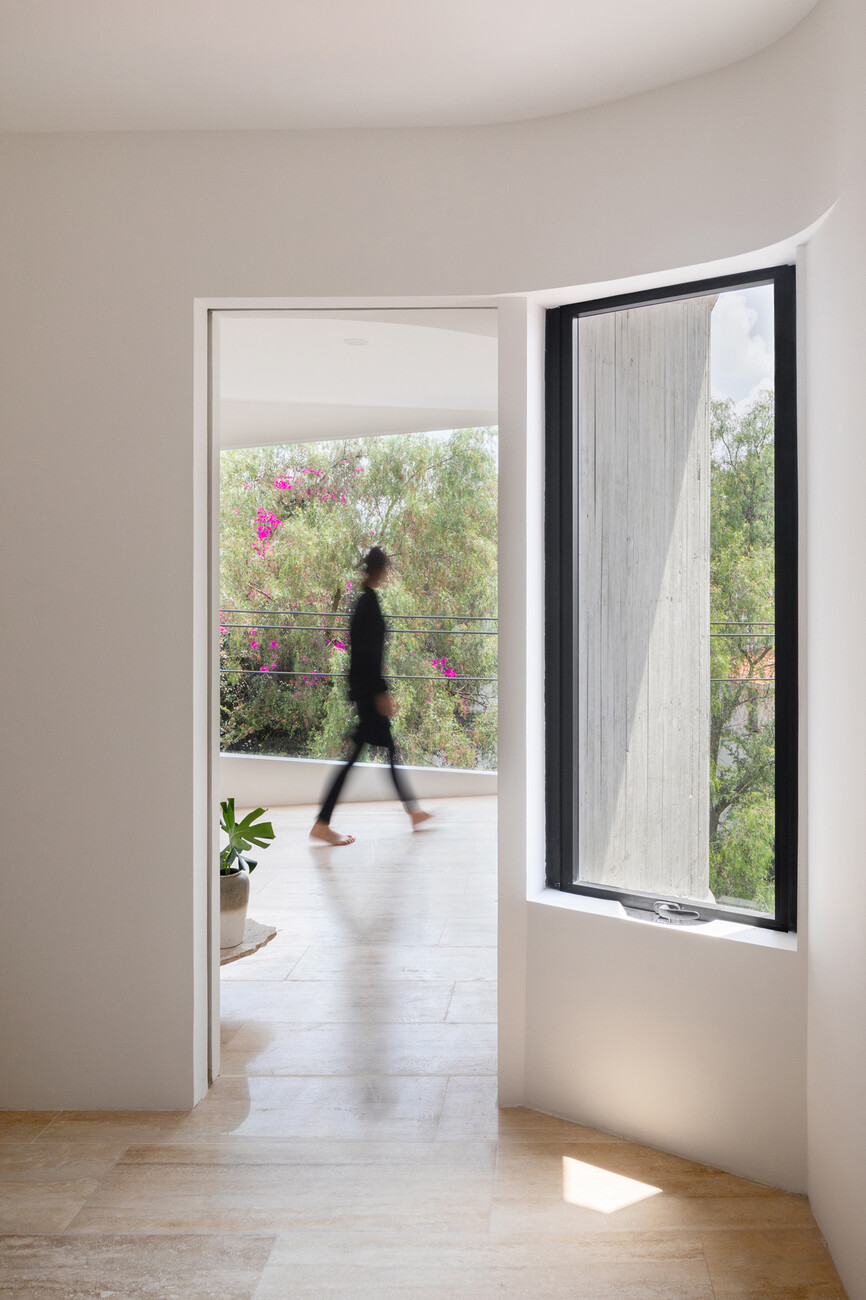 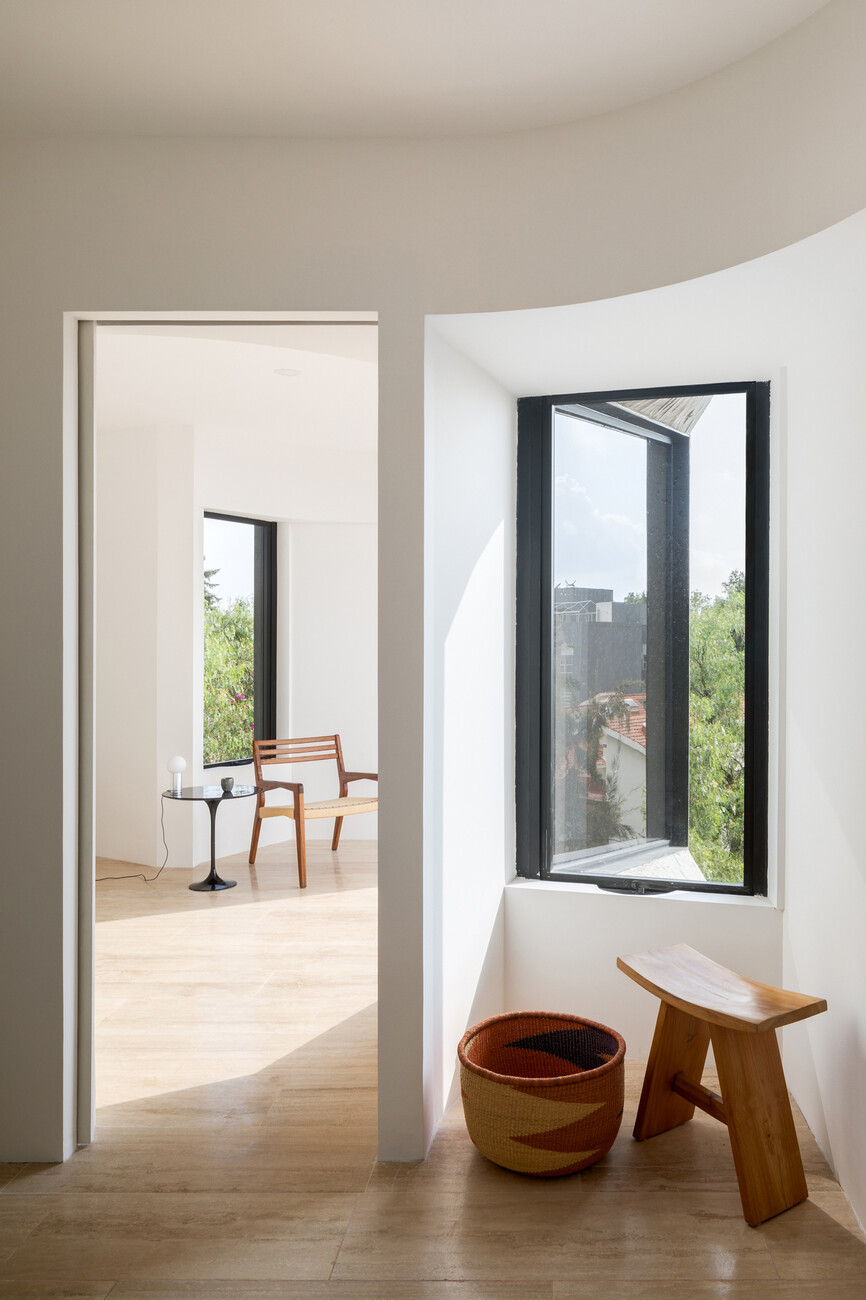 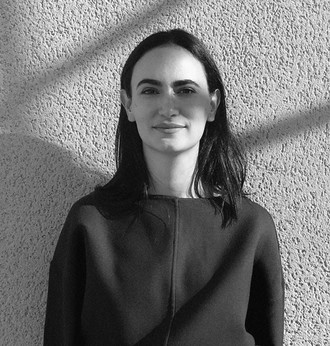 The Mexican architect Frida Escobedo came to international fame in 2018 with her design for the Serpentine Pavilion in London. In her work, questions about urban spaces are met with realistic answers. She tells us about her architecture in an interview. 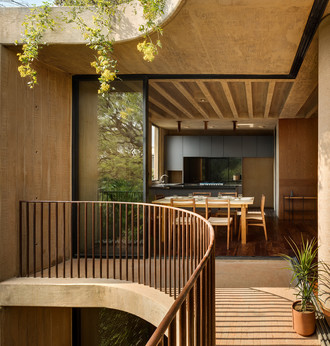 In Mexico City the architecture studio Taller Héctor Barroso has built an apartment block with an extraordinarily interwoven structure that seems impenetrable at first sight. 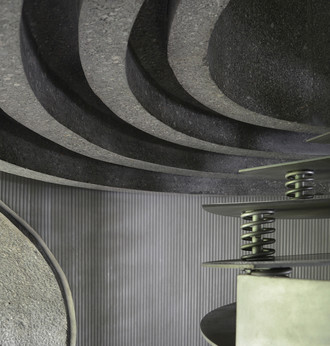 Agustín Hernández constructed his architectural office in Mexico City like a tree. Access to the building erected in the early 1970s is via a gangplank. 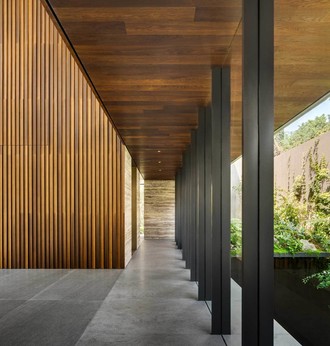 Architecture offices Bernardi Peschard and Blancas Moran have designed a villa in Mexico City that is firmly in the tradition of Latin American mid-century architecture.