Raising the curtain in the boiler hall

In the west of Munich, Stenger2 Architekten and the interior experts at Arnold/Werner are transforming the former Aubing thermal power station into a monumental cultural meeting place complete with bat biotope. It is to go by the name of Bergson Kunstkraftwerk.
by Gabriela Beck | 11/7/2022

A multifunctional event venue is currently evolving where once illegal Techno raves pounded and urban explorers quietly roamed the graffiti-augmented old industrial architecture. Its 20,000 square meters are to encompass a concert hall, a jazz club, event spaces, restaurants and bars, and Germany’s largest gallery space for contemporary art. Here, proprietors Michael and Christian Amberger aim to create a place that makes art accessible to everyone and where visitors will enjoy spending the whole day.

The former thermal power plant in a somewhat nondescript residential and industrial area on Munich’s city limits offers a unique setting for this goal with its reinforced concrete and brick architecture and the narrow, tall bands of windows that lend a vertical rhythm to the buildings. Despite having been built during the Third Reich, the architectural design is based on early 20th-century Historicism. “In other words, the façade is not informed by the ‘Nazi style’,” comments architect Markus Stenger. The impressive cube is intended to define the look of the place in the future too. An adjacent edifice in the shape of a cube, albeit considerably lower, is to be built: Its slatted façade curtaining a glass shell mirrors the vertical window alignment of the historical structure next to it. The uniform arrangement of the slats along the entire length of the new building gives rise to a canvas of sorts, which shows off the architecture of the old power station to even better advantage. The additional building is necessary in order to accommodate all the diverse uses of the complex, explains Stenger. Alongside showrooms and conference spaces it will house the “Pulpo Gallery” (which straddles no less than four stories) and a concert hall seating 476 music enthusiasts; the latter boasts a classic rectangular shoebox design and goes by the name of “Elektra Tonquartier.”

The heart of Bergson Kunstkraftwerk is the power plant’s almost 25-meter-high former boiler hall: the “Atrium”, a reinforced concrete skeleton with a Historicist shell and newly added access structures. “You have to bend your head right back to be able to see the ceiling,” says Stenger. “It feels a bit like being in the Pantheon in Rome.” The architects have sought to underscore this impression by installing a structurally necessary reinforced concrete ceiling in panel form. The architects have from the outset taken their cue from the idea of preserving the effect of the voluminous space and nonetheless enabling use of the horizontal plane. That is why they are installing only a monolithic technical block to supply the ground-floor hospitality outlets, a day-time bar (clad in black and whose cubic shape recalls the former boilers) and a wide staircase in the center of the hall leading to the ‘bel étage’ and whose oak benches encourage visitors to sit a while and soak up the atmosphere. The all-round gallery at a height of six meters affords fantastic views of the cathedral-like expanse of the hall.

The interior experts at Arnold/Werner were tasked with making such a gigantic space welcoming for visitors. “Stenger2
Architekten’s classic design with its fair-faced concrete, oak and a dark cast asphalt terrazzo floor provided a good basis for us,” suggests Sascha Arnold. The interior design derives from a color and material concept that brings to life the combustion processes that once took place here. The spacious foyer with the day bar is dominated by a mix of sulfur-yellow and ash-gray tones. The fine-dining restaurant “Zeitlang” with separate lounge and bar area is located on the south side of the building. There, carbonized wood surfaces and ‘black-washed’ bricks foster to a sense of security within the raw reinforced concrete skeleton of the hall. “We deliberately kept the restaurant very dark, because we imagine it will mainly be used in the evening,” explains Arnold. For him, good acoustics, a good lighting concept, and corner seats are the mainstays of any successful interior in the hospitality sector. For the day bar and the restaurant in the “Atrium” this translates into cushioned benches with high backrests, acoustic material glued under the tabletops to reduce noise, and an intelligent lighting concept encompassing basic illumination with slim cones hanging from the ceiling and dimmable spotlights above the tables to create a pleasant atmosphere.

The cultural usage concept of the “Atrium” is informed by the greatest possible flexibility. The owners do not want any art form to be excluded on the basis of the structural conditions – from acrobatic performances to poetry slams to crazy fashion relays between several smaller podiums. The arrangement of event areas on the ground and first floors also enables several events to be held simultaneously, for instance during a trade fair. Numerous suspension points are envisaged for the technical equipment, each with a load-bearing capacity of 500 kg. The “Silo”, the name given the four former coal storerooms under the ceiling of the “Atrium” is home to additional exhibition spaces. The massive concrete structure catches the eye as soon as you enter the hall. Inside, the rough walls, the mesh flooring installed above the coal outlets, the repetitive emphasis on the four identical spaces, and the soft lighting create a quite unique aura.

And when the sun sets outside, the spotlights come on in the live club “Barbastelle” in the bunker-like basement of the former boiler hall. Here, jazz musicians, comedians and writers take the stage. Heavy curtains and small round tables with their own lighting, crimson tones, and a bar with a small menu give rise to an intimate ambiance. “We sought to bring the atmosphere of 1930s New York Jazz clubs into the here and now,” says Arnold. The live club is named after the rare barbastelle bat (barbastella barbastellus), which wintered in the decommissioned power plant. And to ensure the highly protected species also feels at home at Bergson Kunstkraftwerk, the designers have created a completely separate cave for them in the basement, including a tunnel to the outside at some distance to the future cultural activities, which are planned to begin here in October 2023. 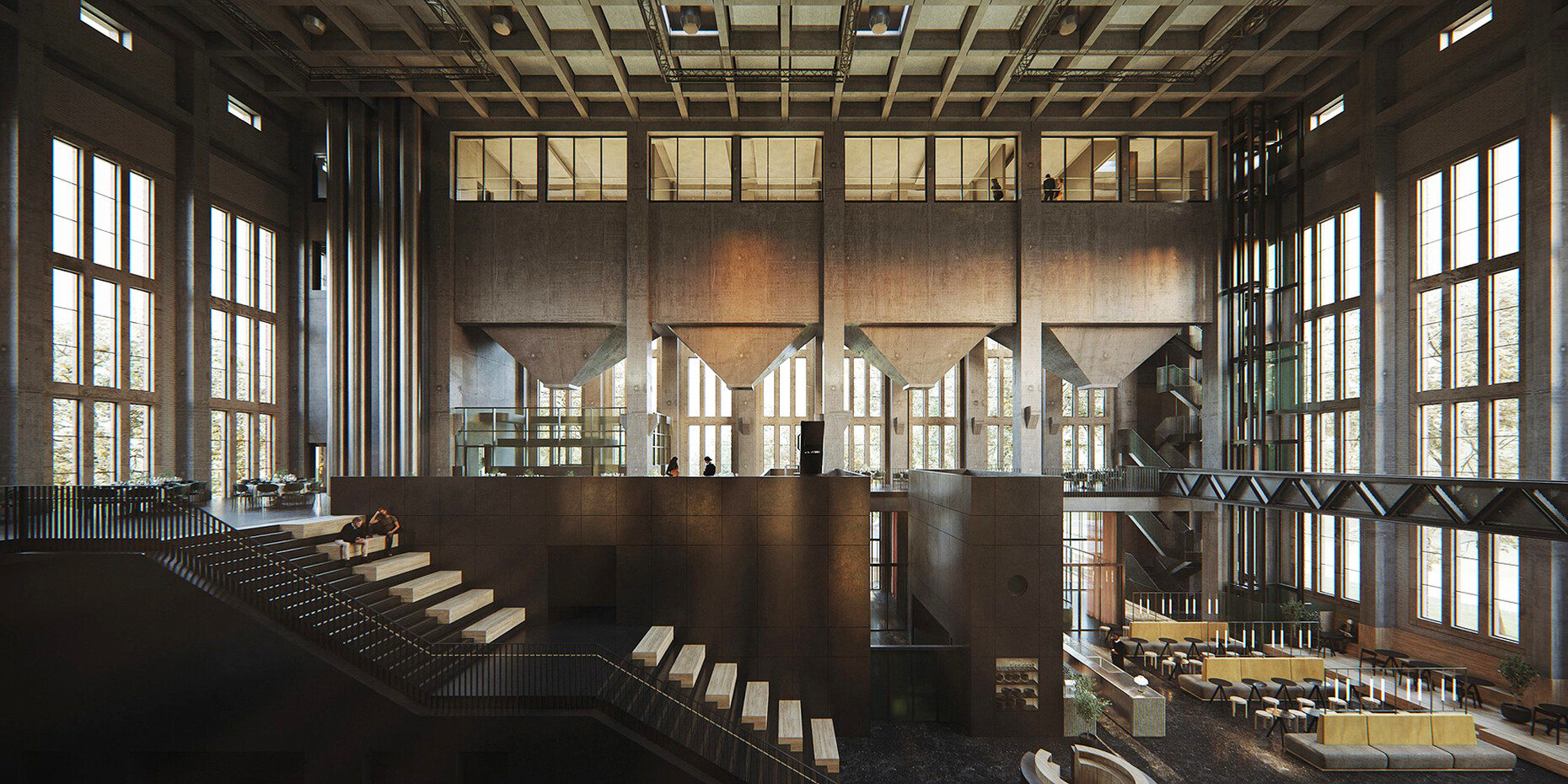 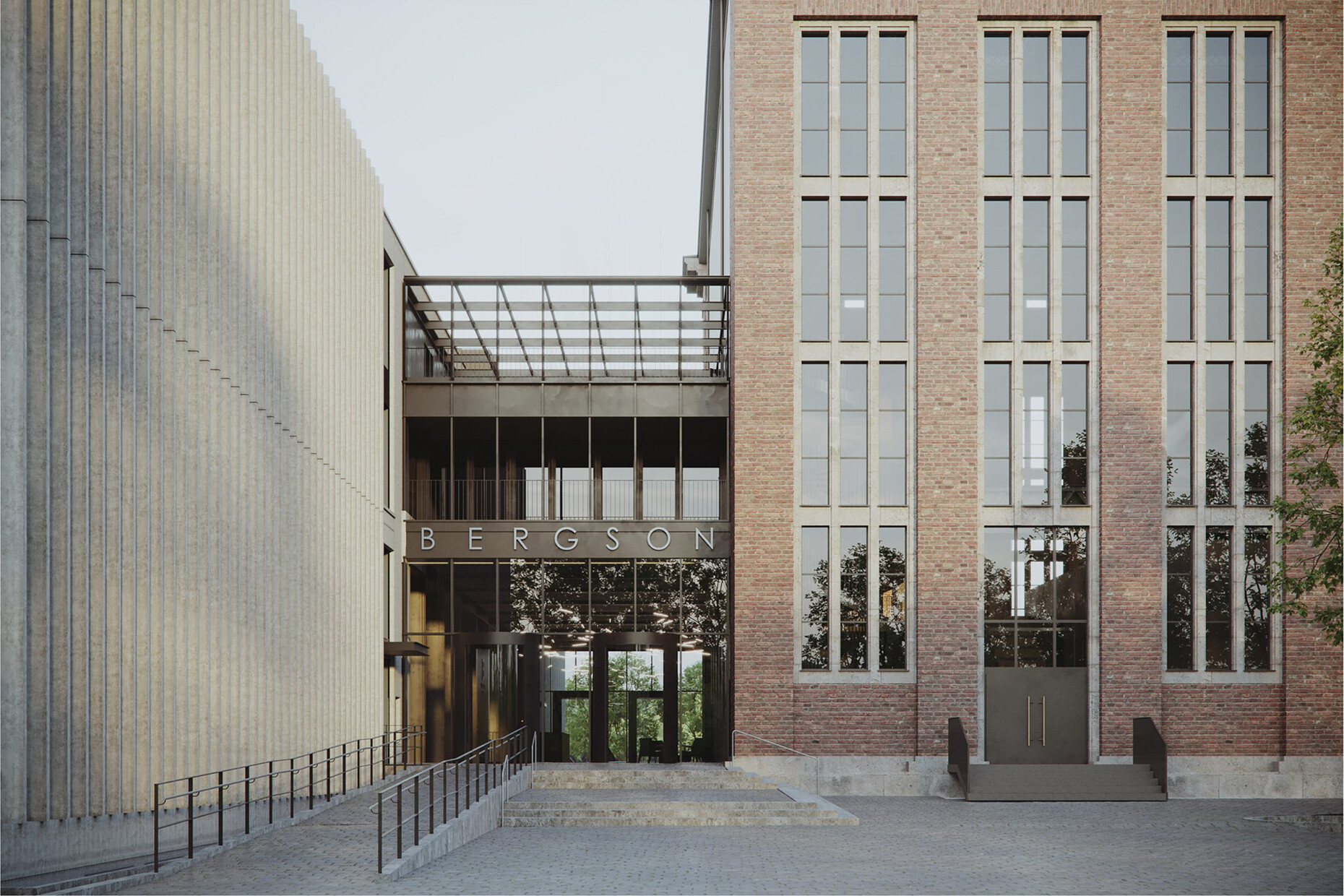 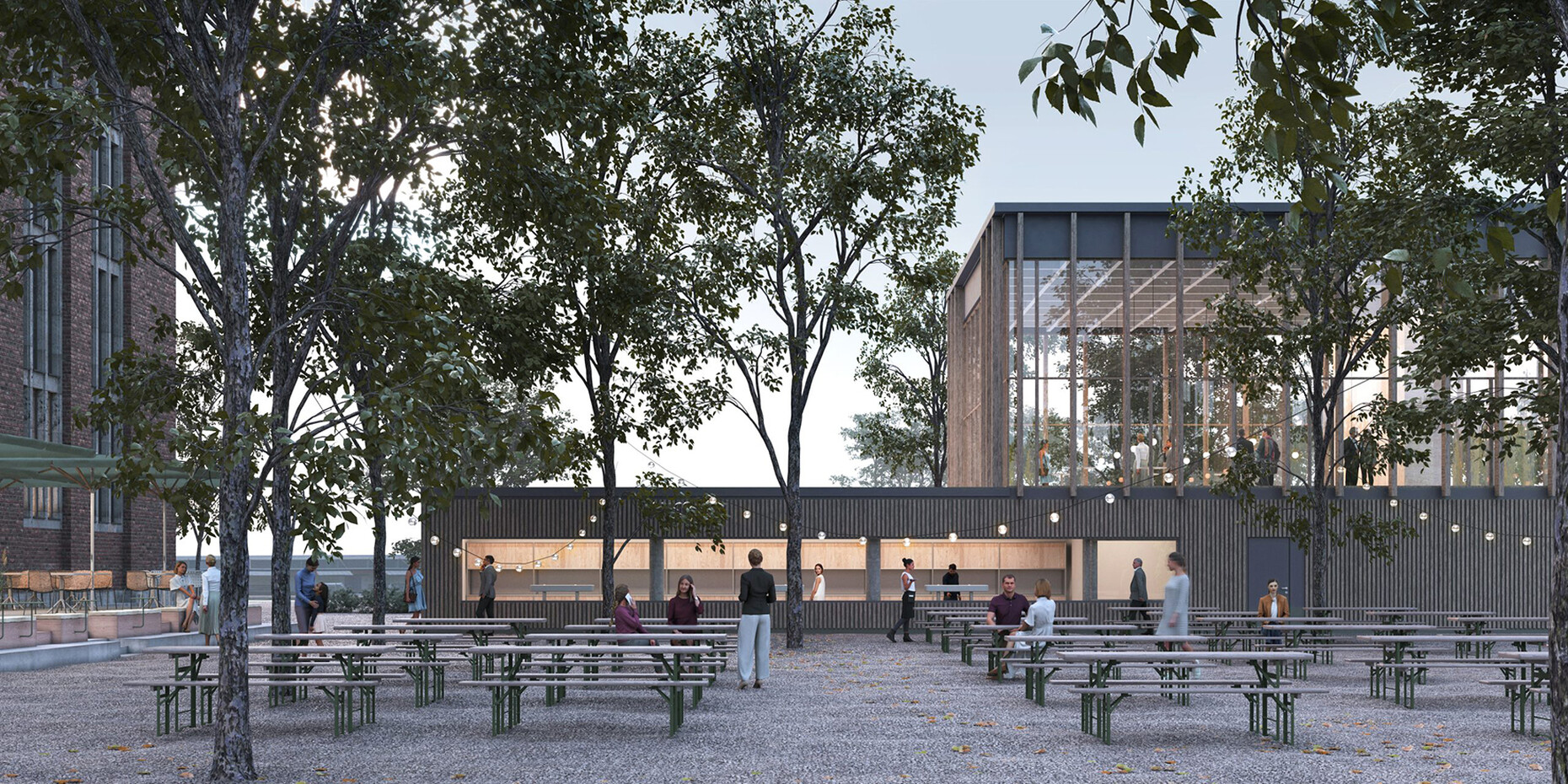 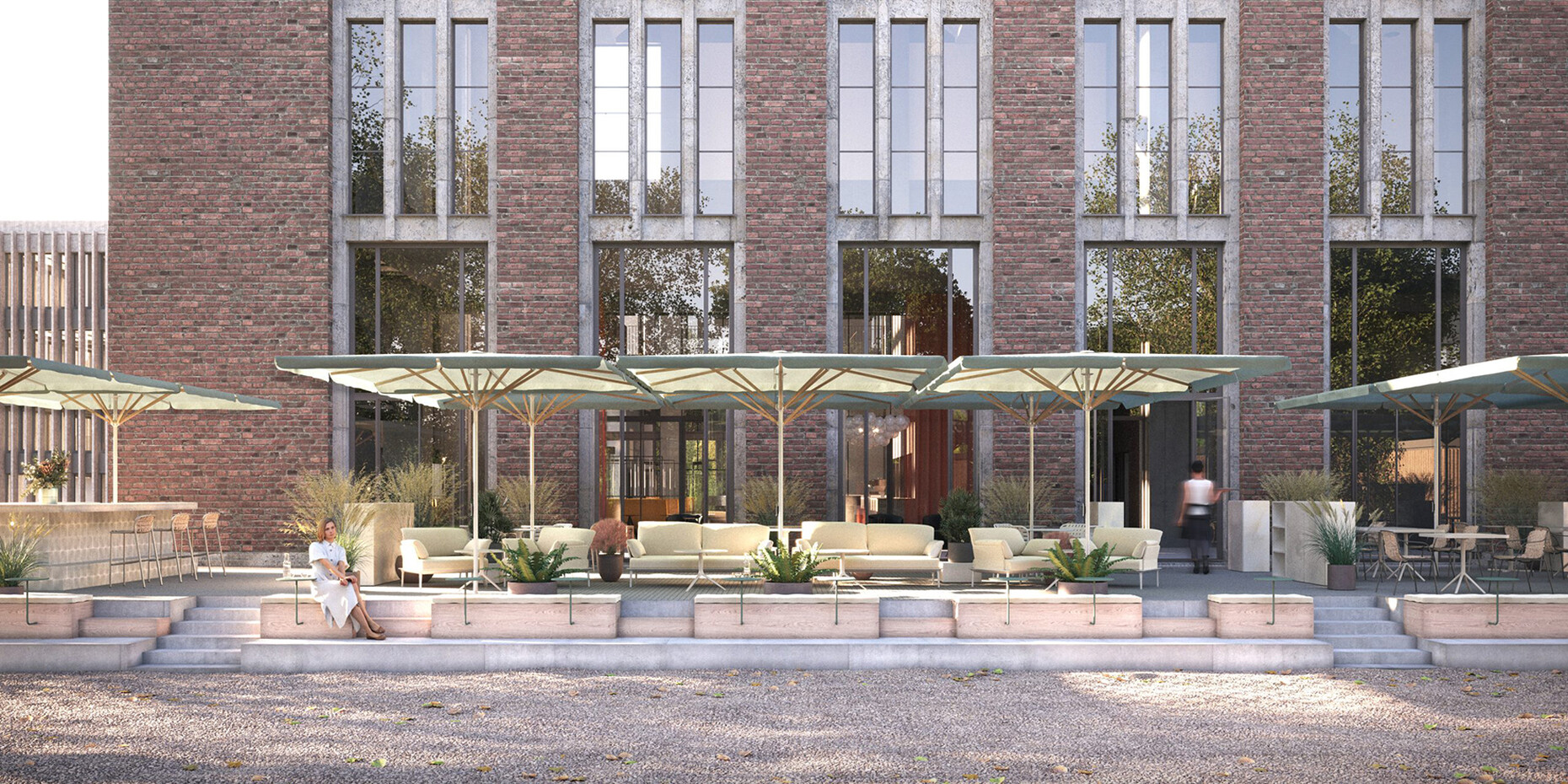 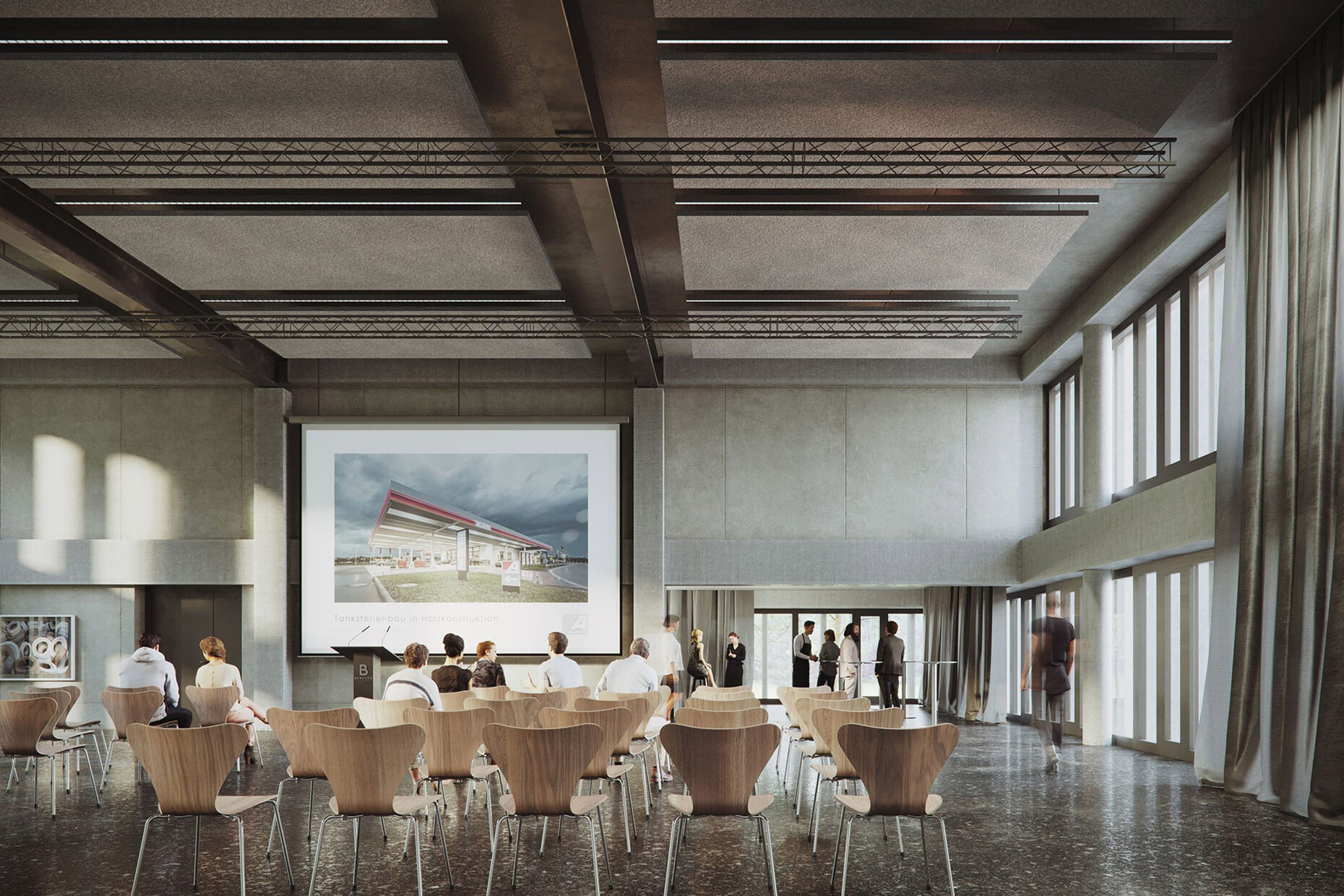 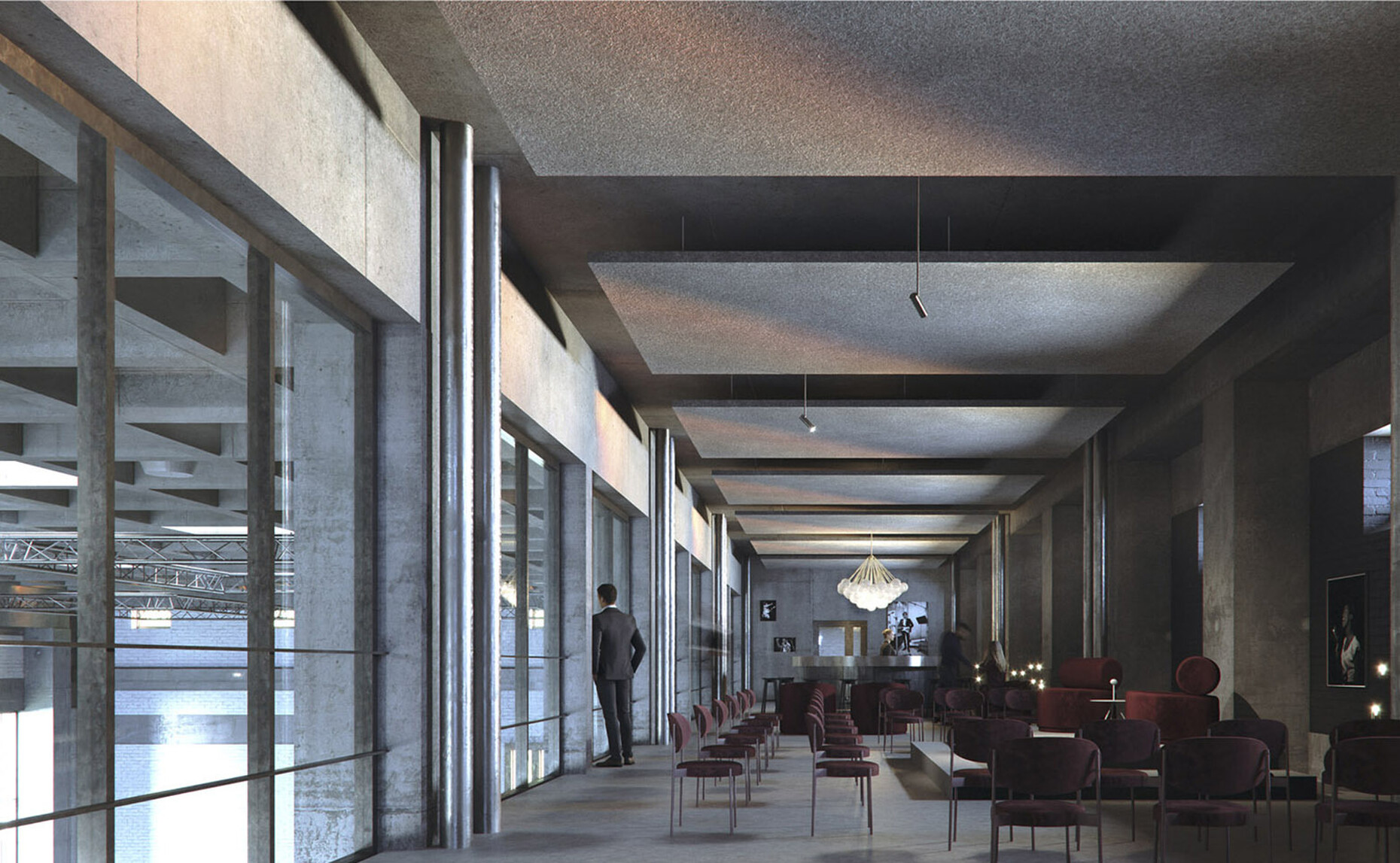 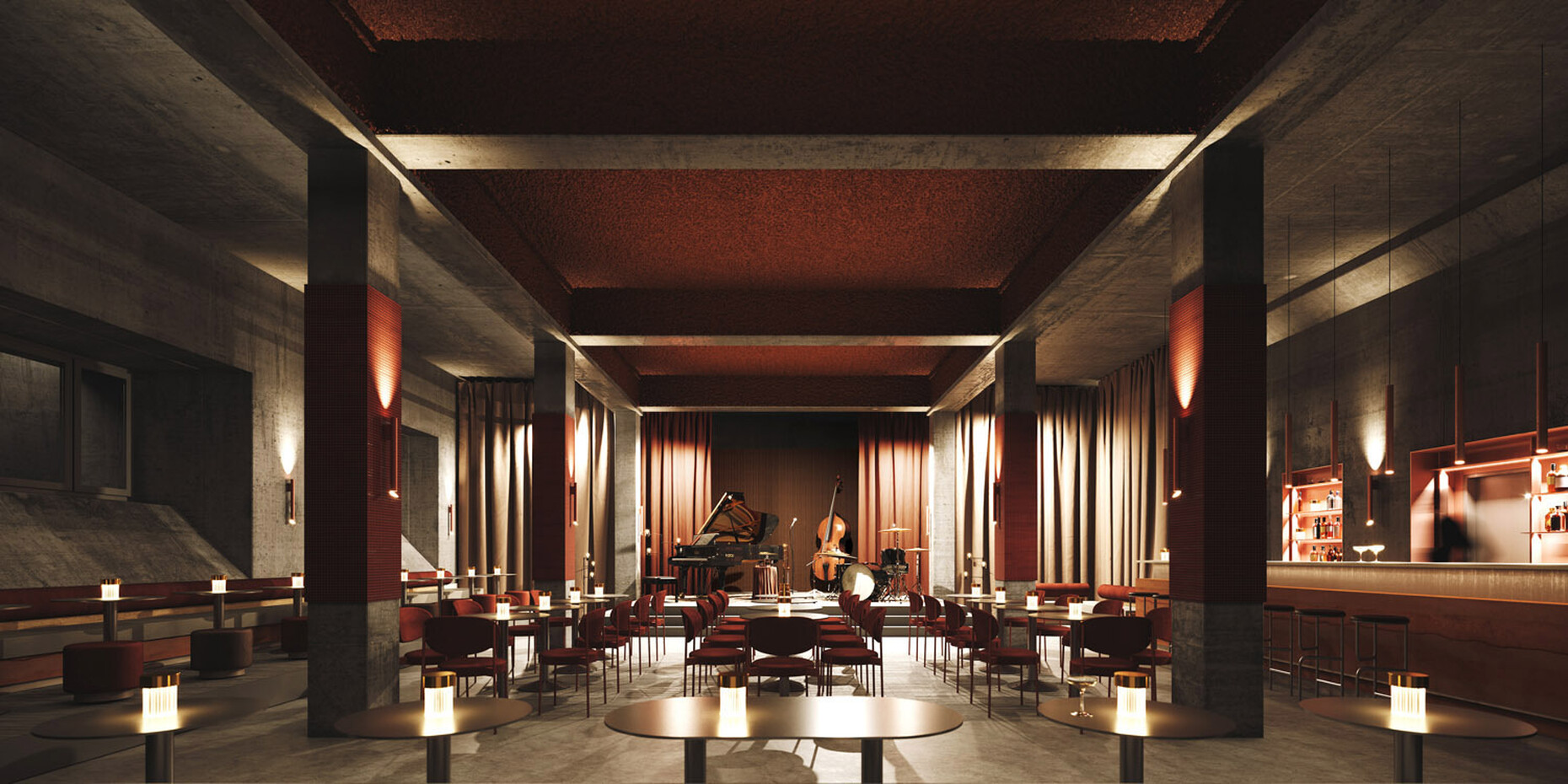 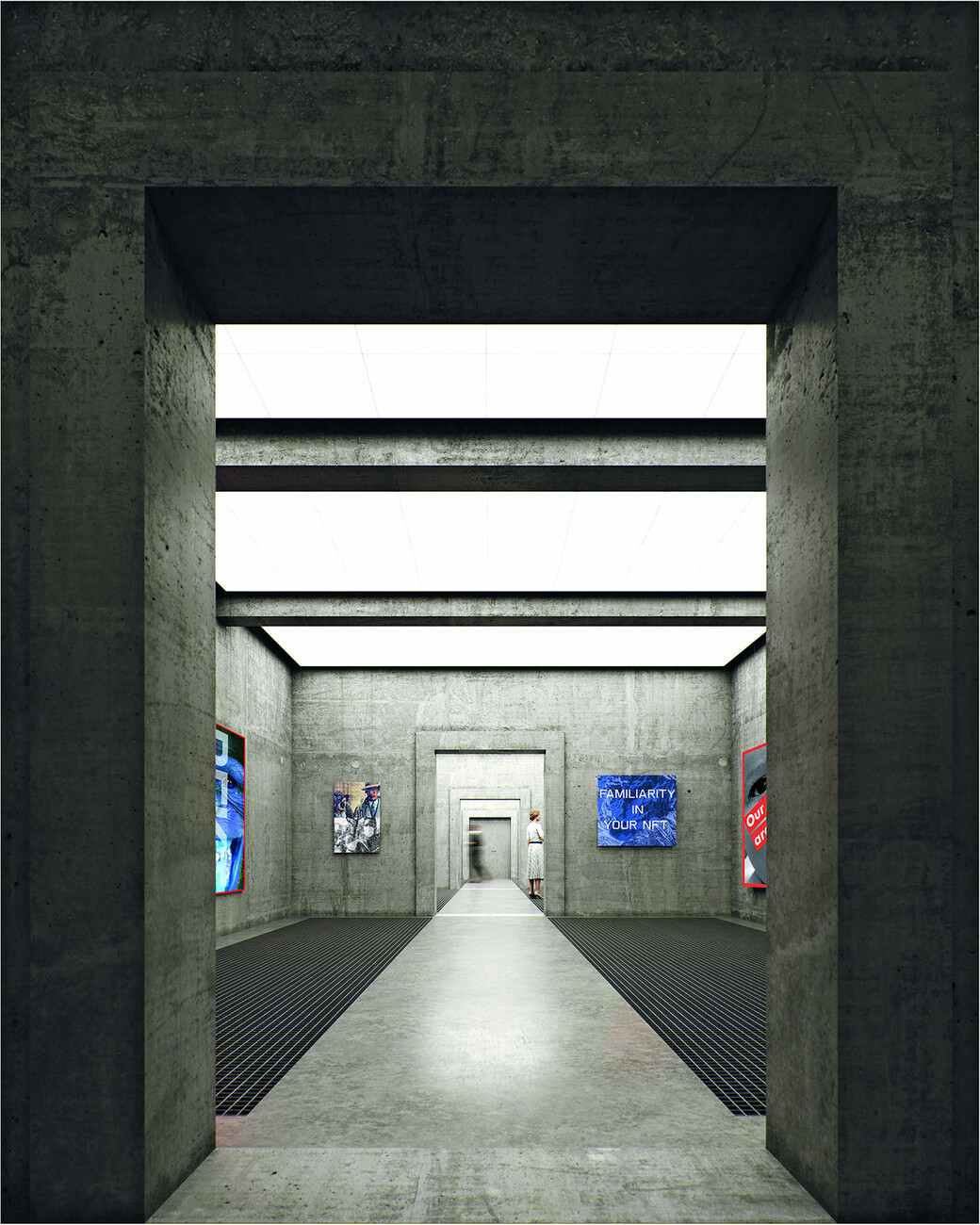 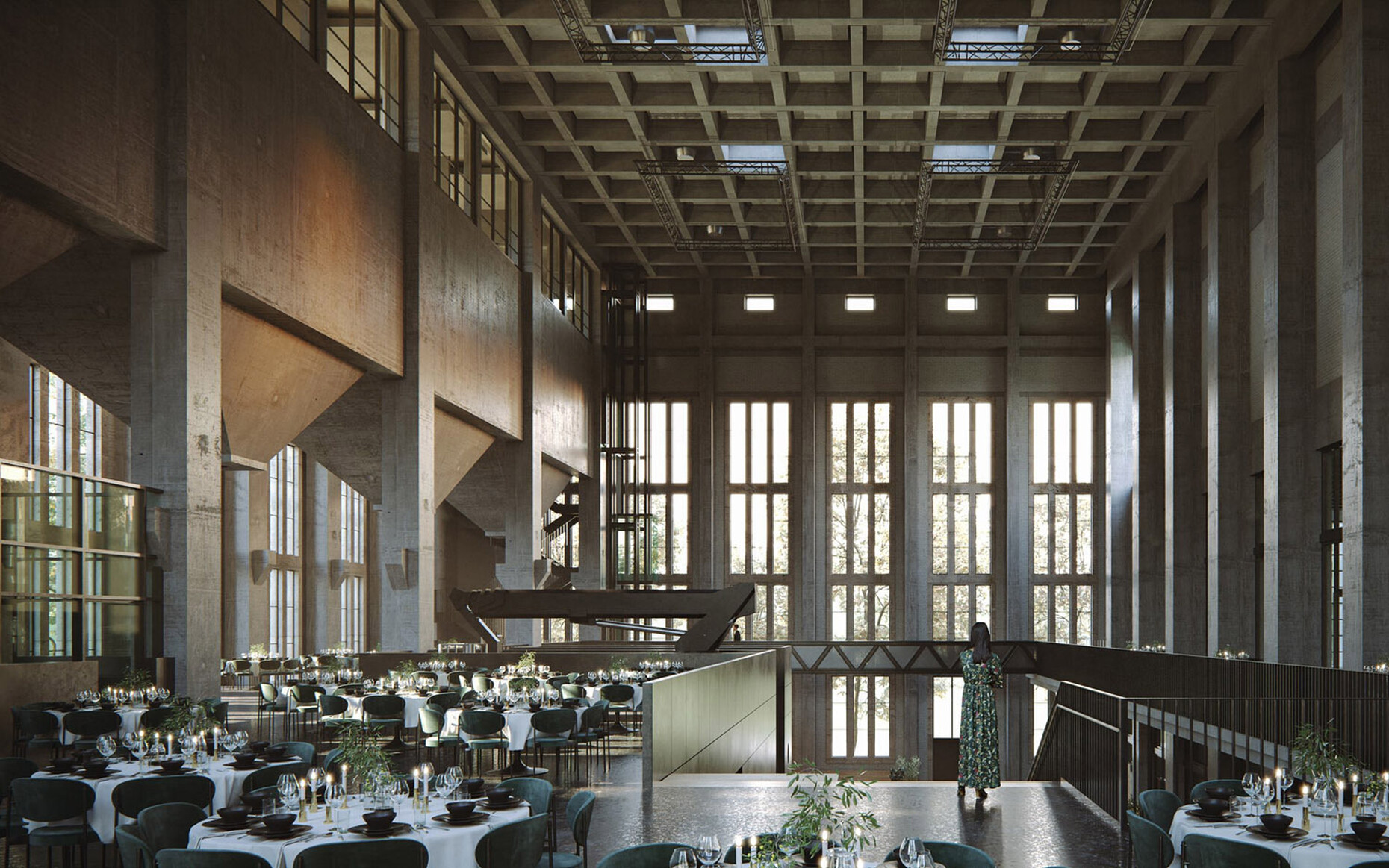 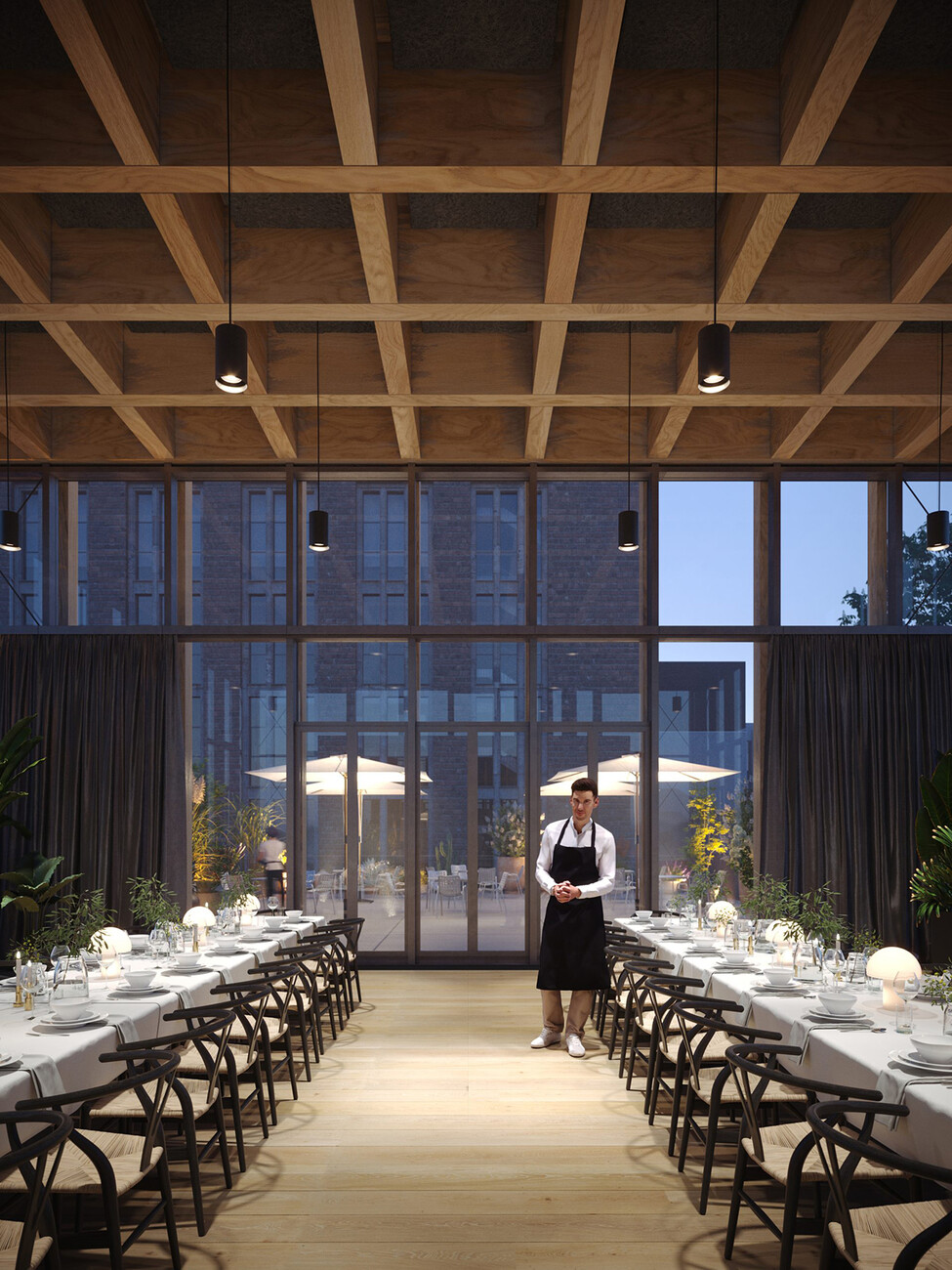 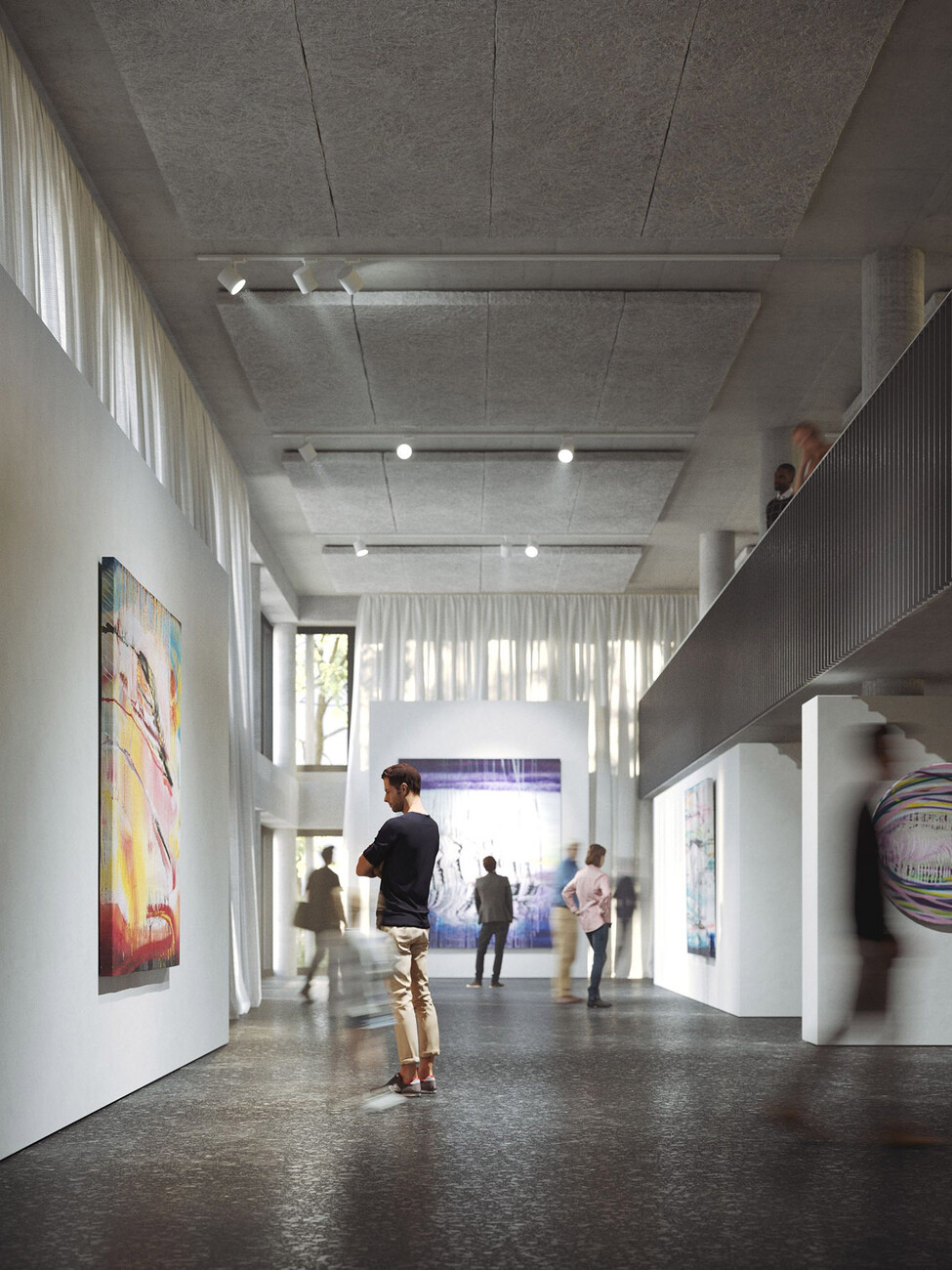 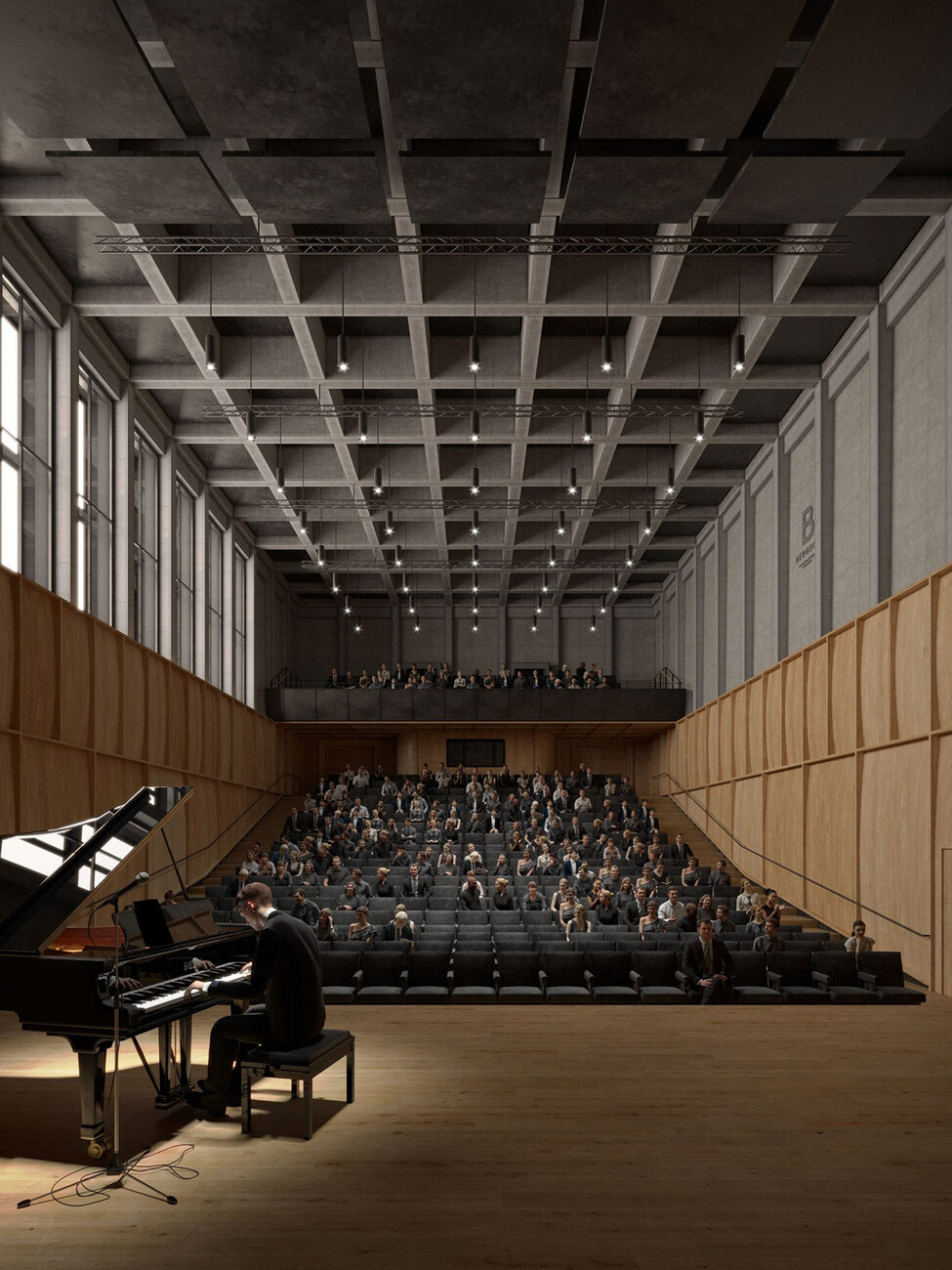 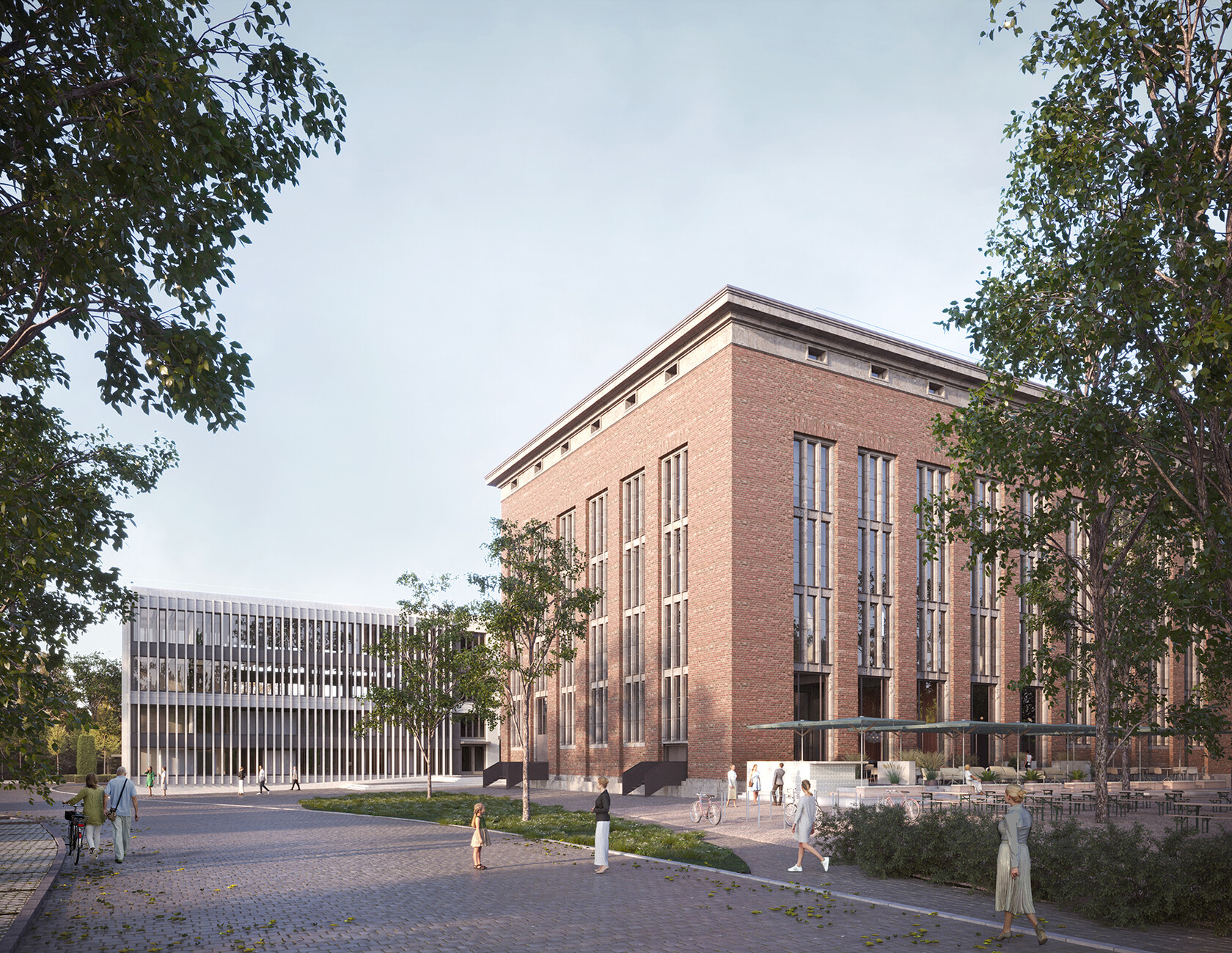 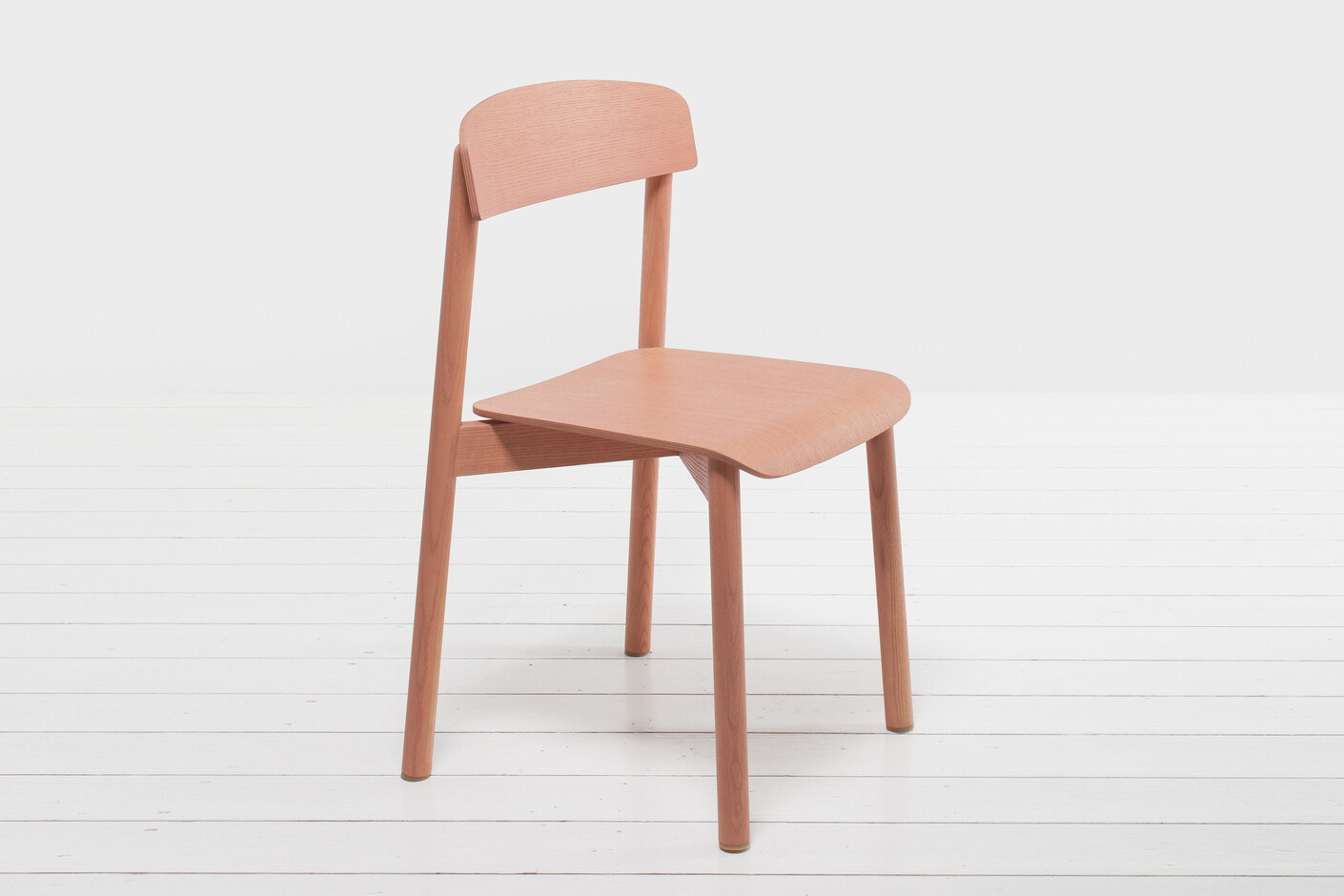 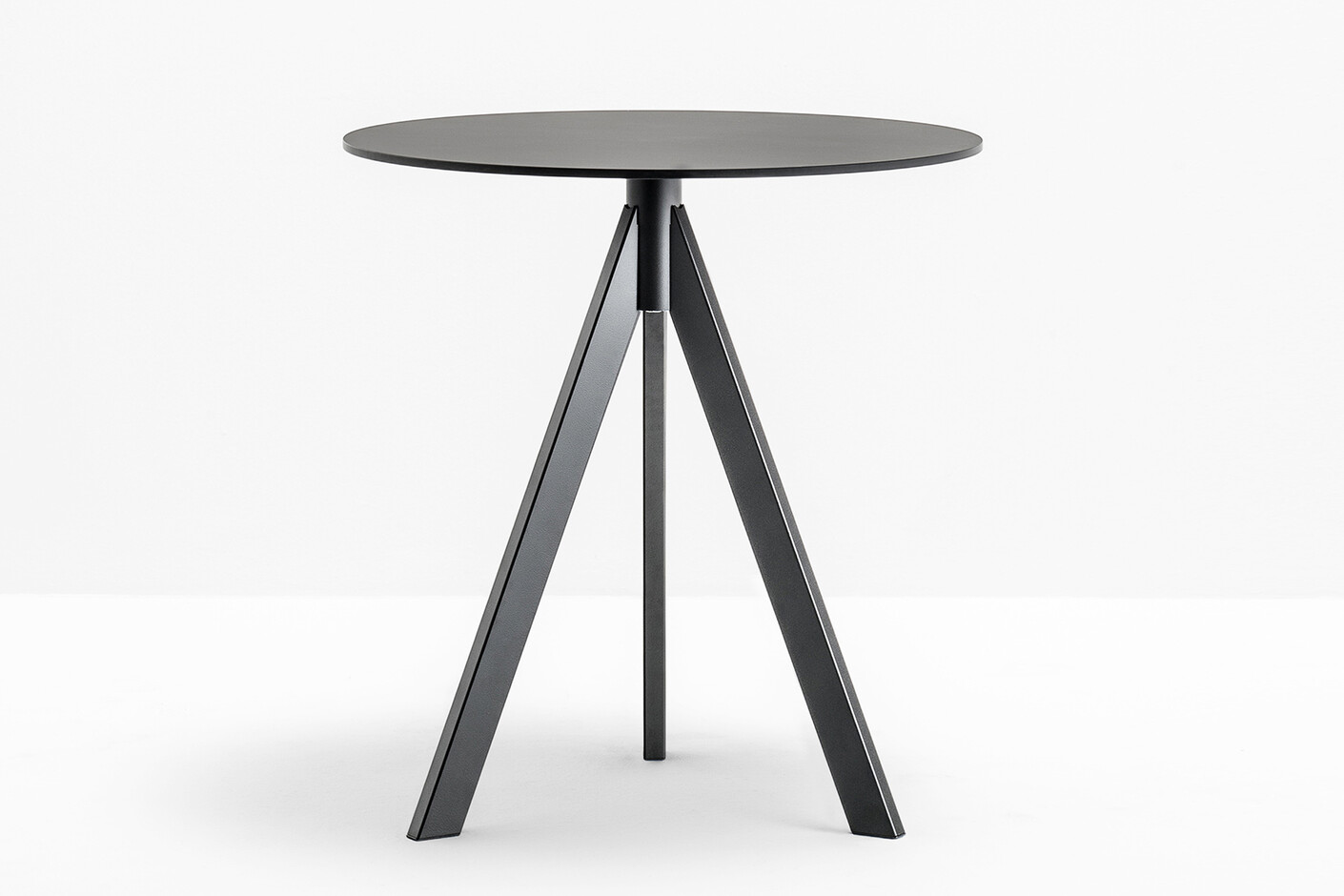 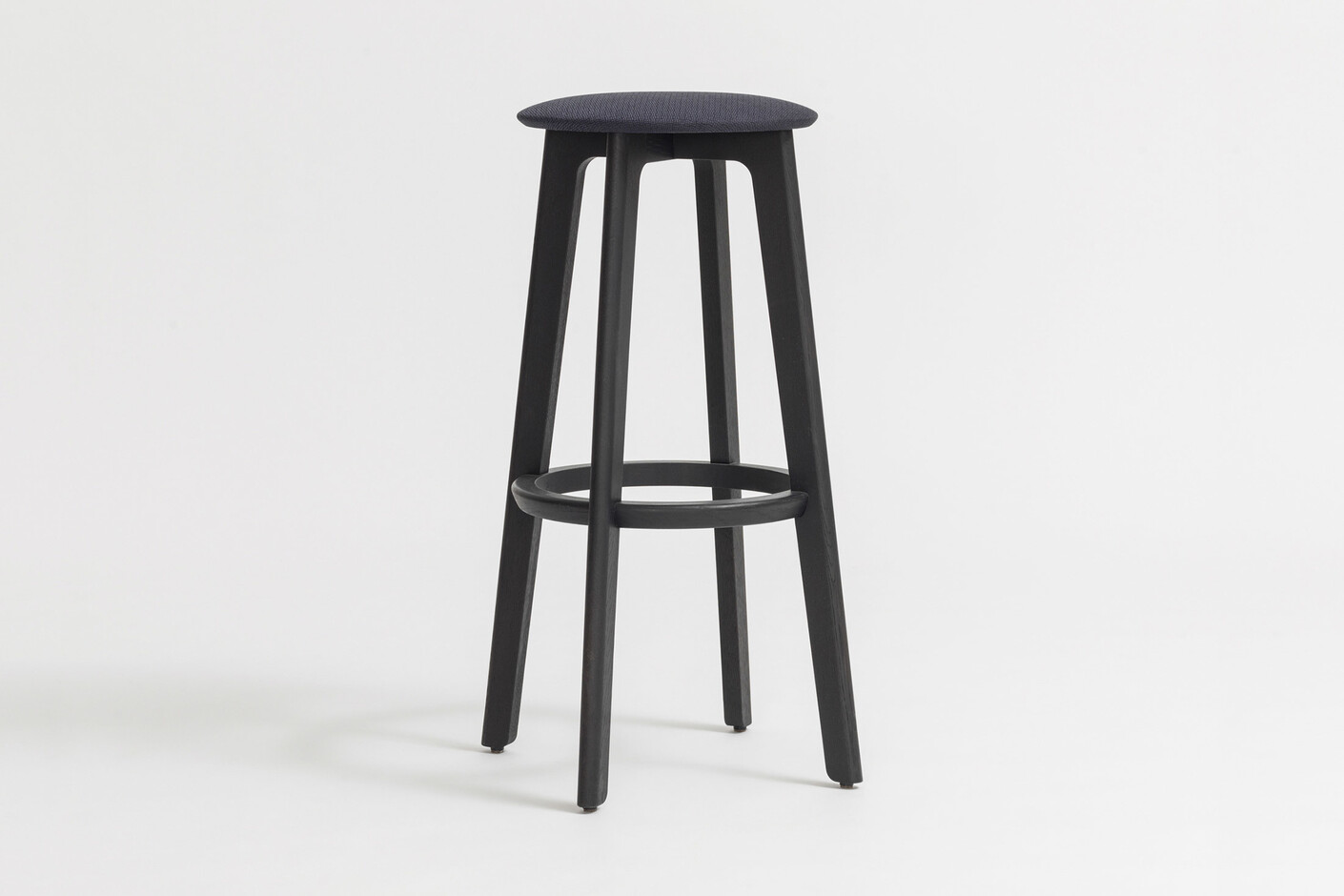 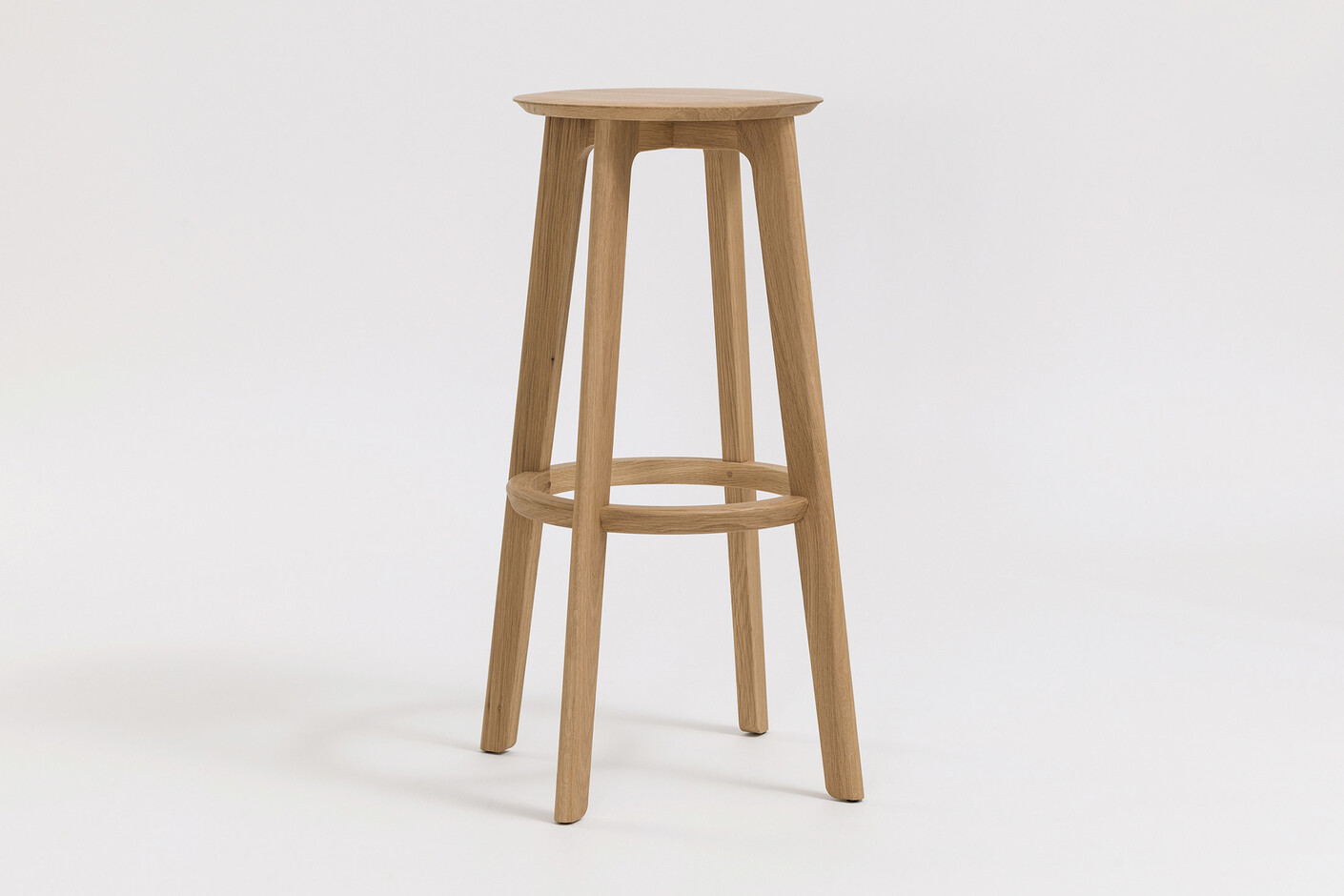 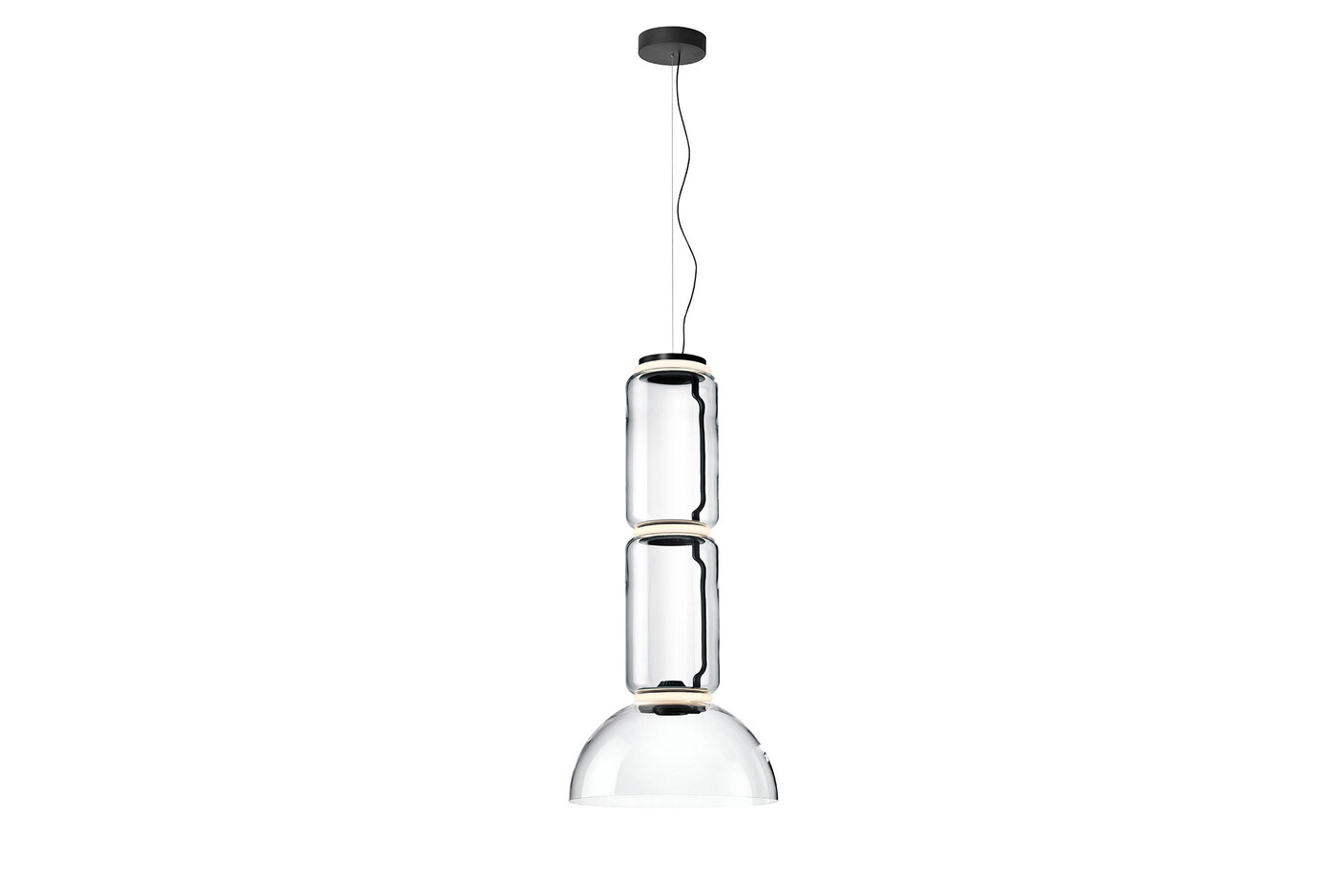 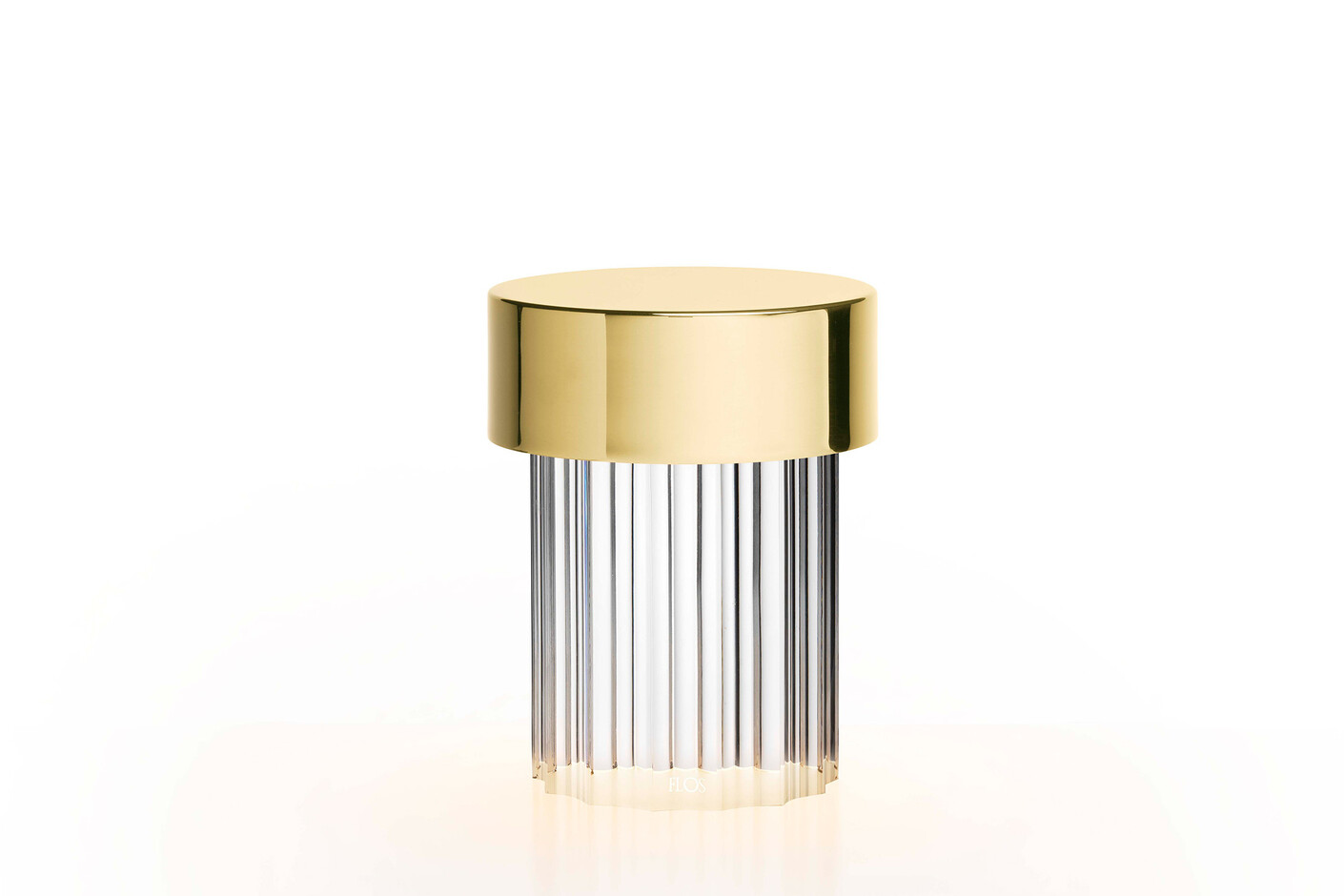 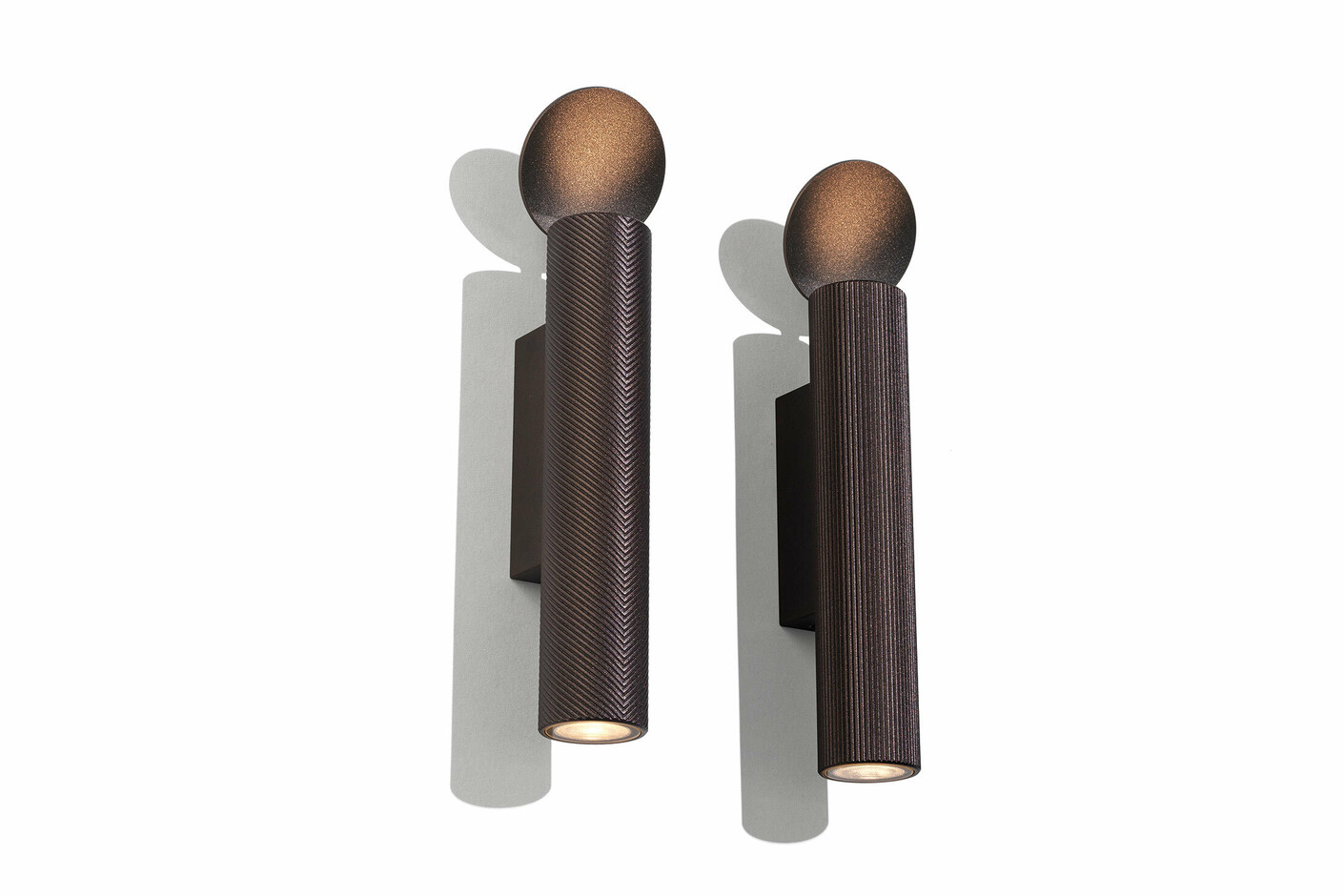 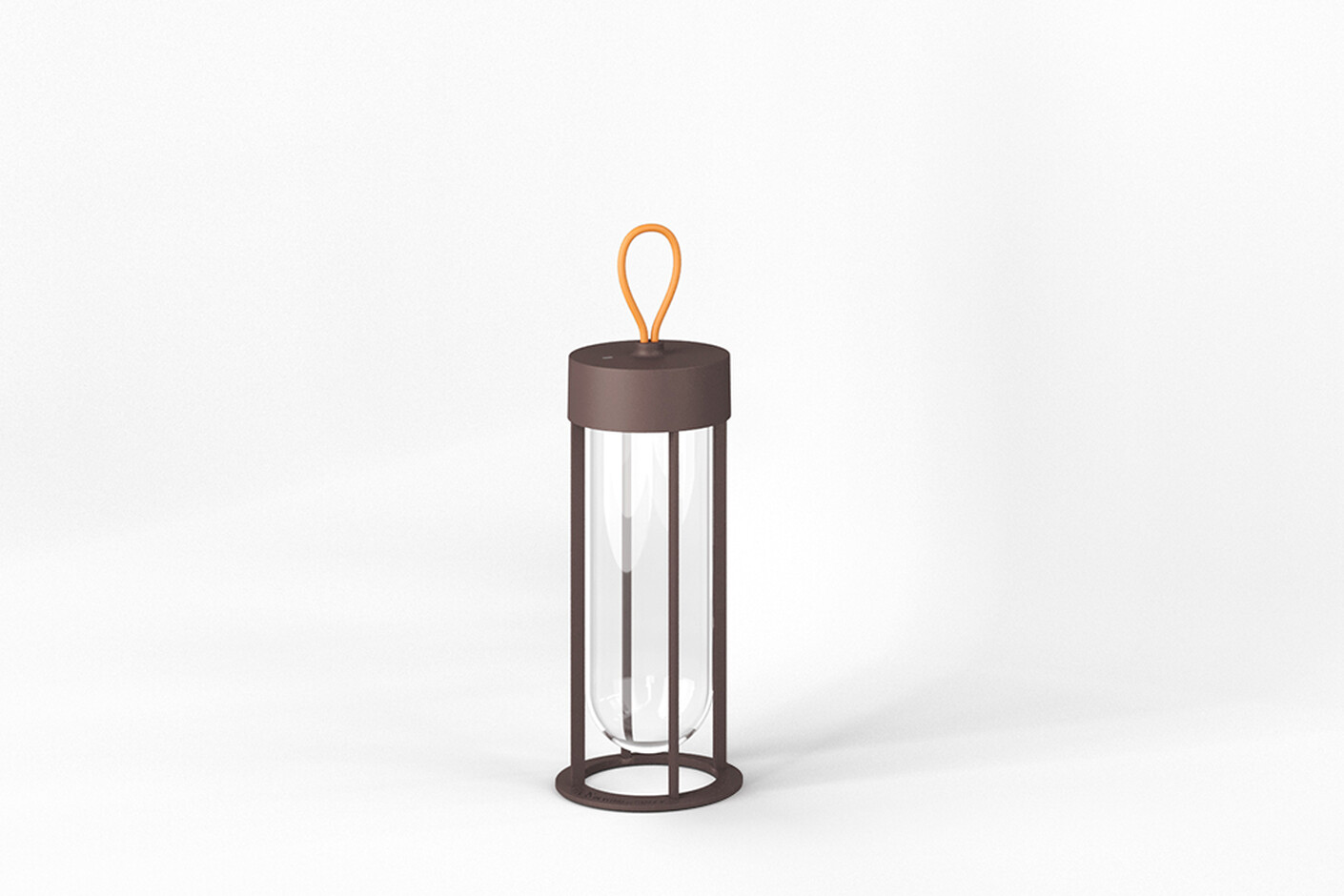 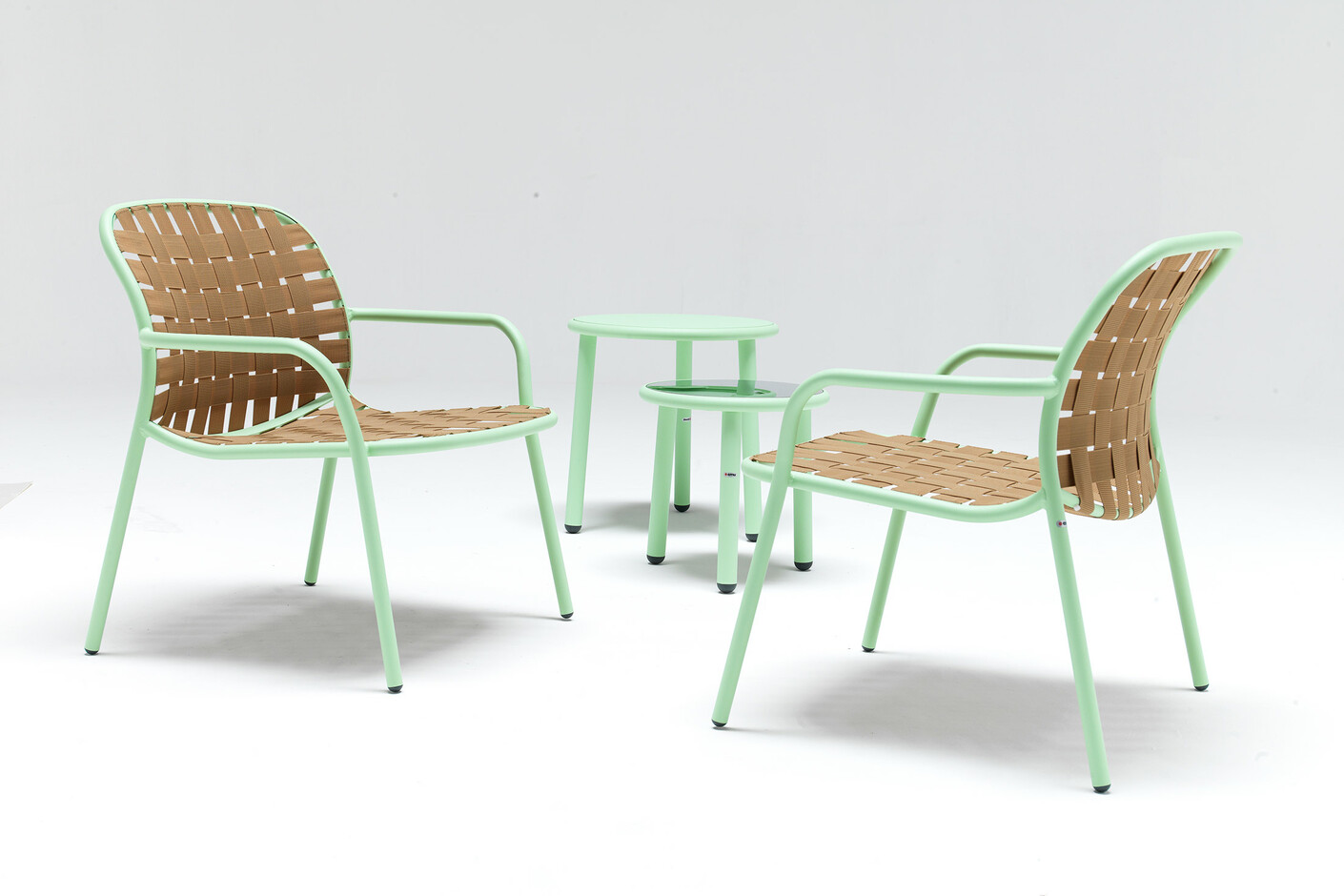 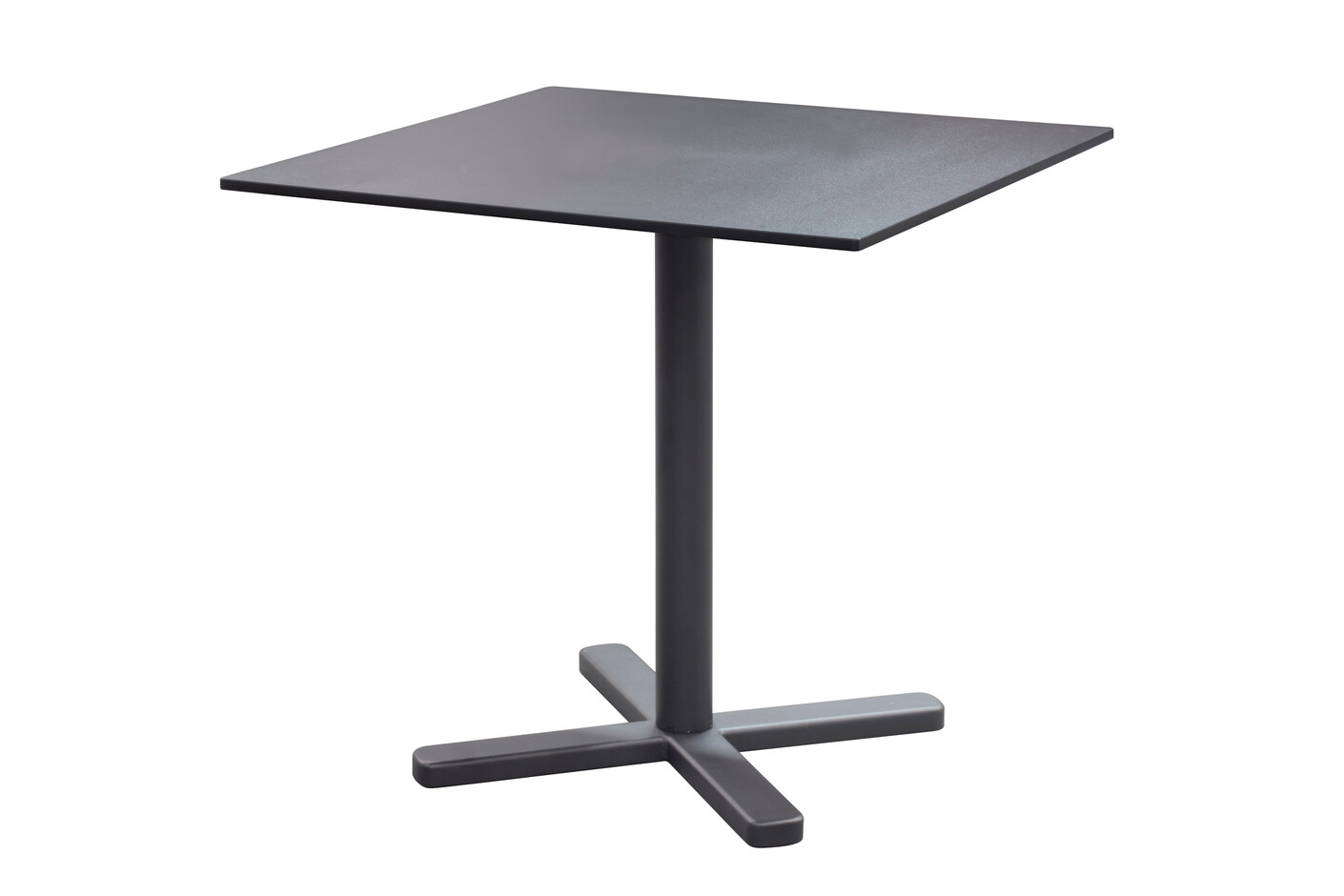 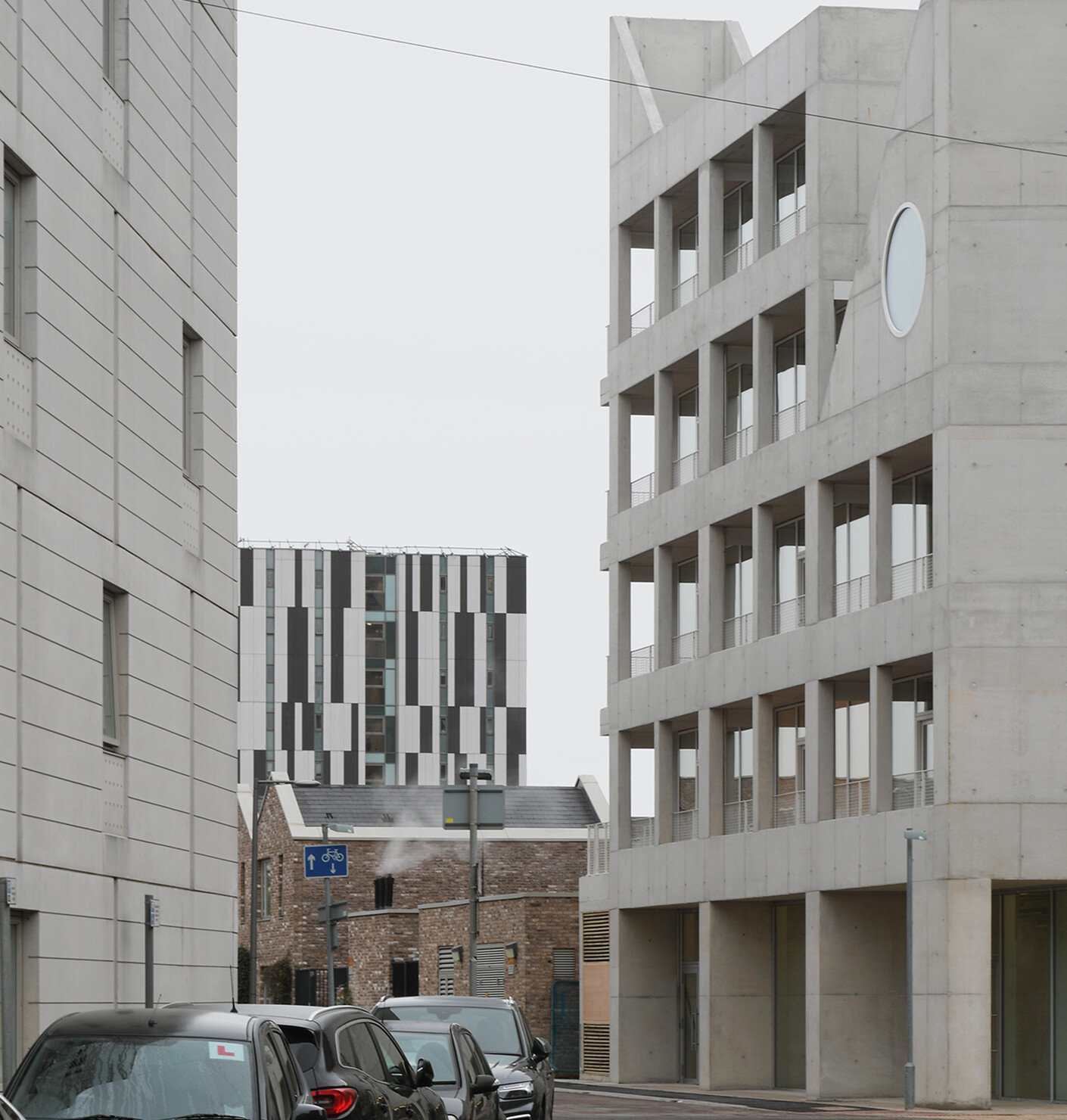 The "House For Artists" in London offers not only flexible apartments, but also studios and communal areas that are intended to act as social catalysts in the neighborhood. 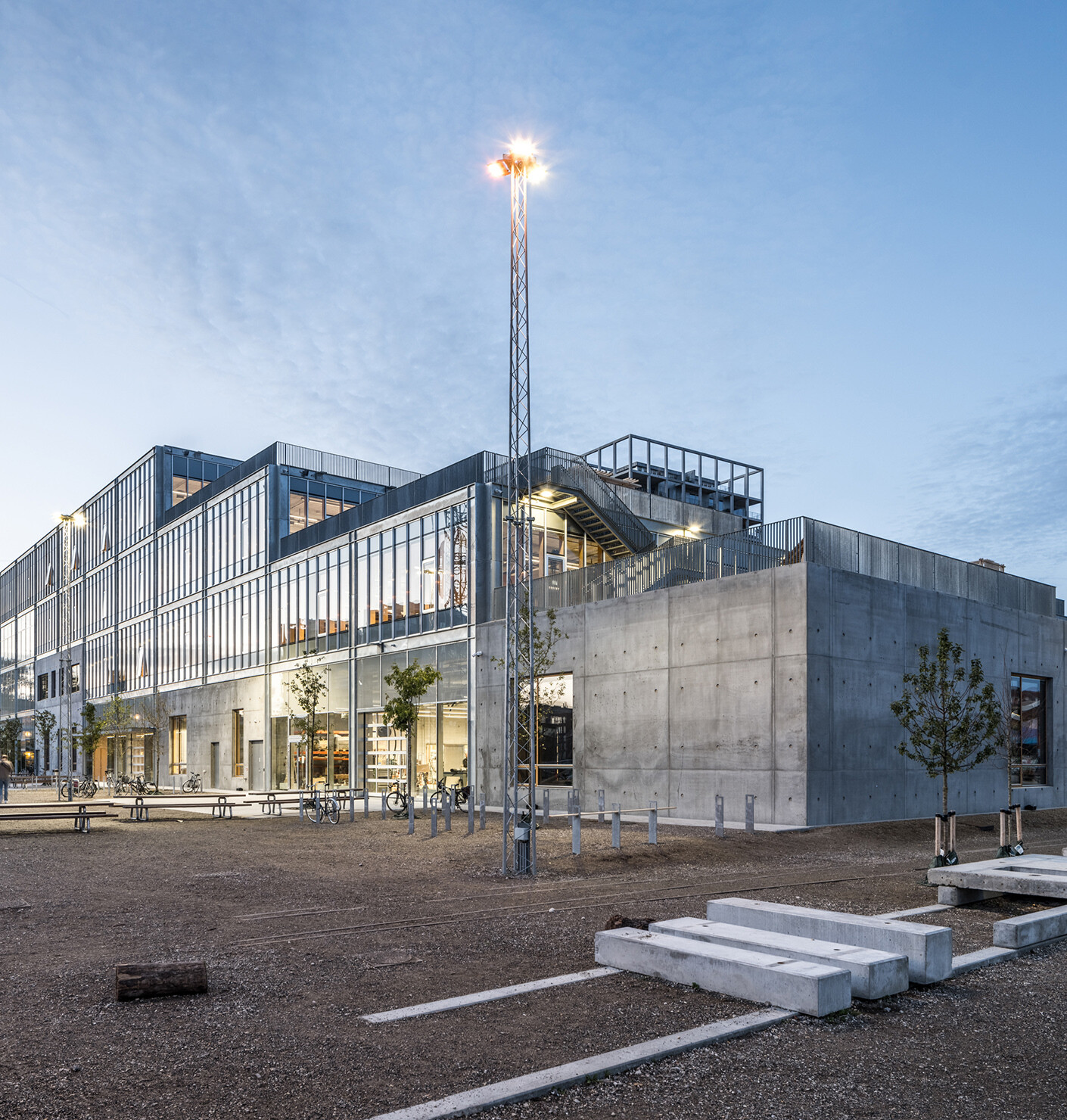 The new Aarhus School of Architecture sees itself as an open laboratory that not only wants to create new synergies between students and teachers, but also seeks exchange with the neighborhood. 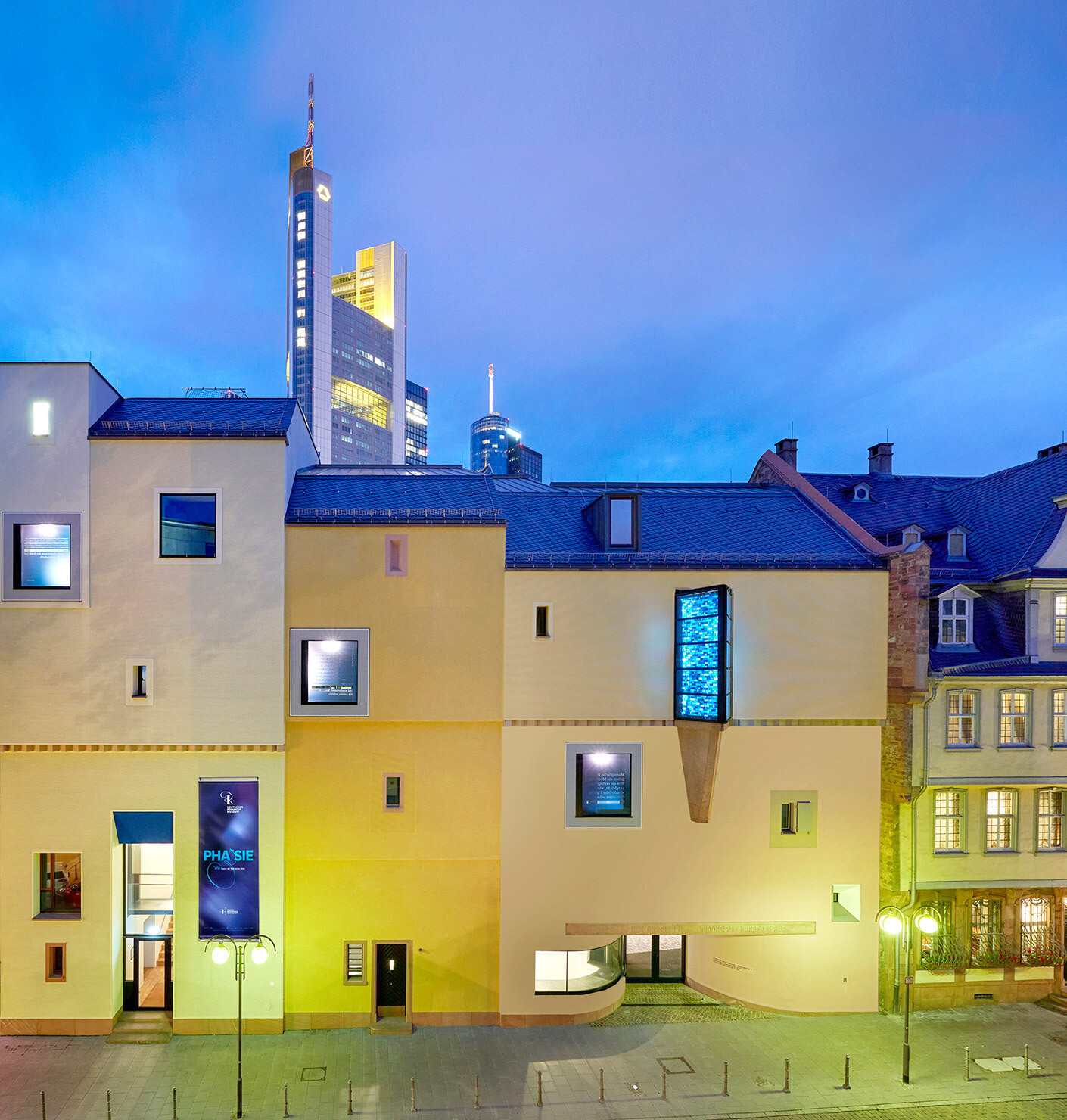 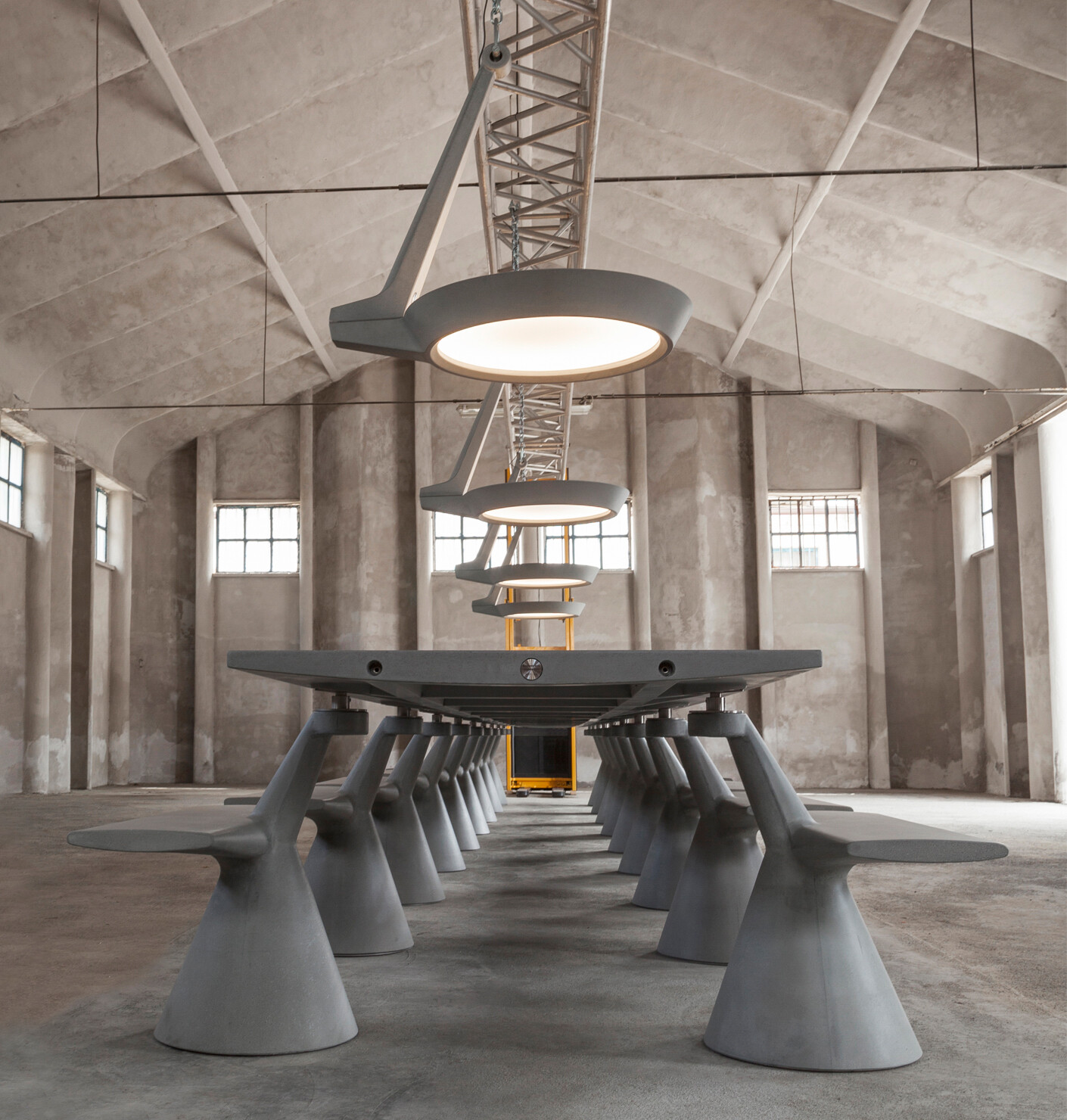