“The phonograph does not hear as do ears that have been trained immediately to filter voices, words, and sounds out of noise; it registers acoustic events as such. Articulateness becomes a second-order exception in a spectrum of noise.”

White noise in the audio-visual theater

The triumphal march of the audio-visual in everyday life comes as a real shock to anyone pondering writing in general and writing by hand in particular. “Ever since that epochal change we have been in possession of storage technologies that can record and reproduce the very time flow of acoustic and optical data.”[1] Ears and eyes have become autonomous. Since then, the audio-visual media define what really is. “What phonographs and cinematographs, whose names not coincidentally derive from writing, were able to store was time: time as a mixture of audio frequencies in the acoustic realm and as the movement of single-image sequences in the optical.” [2]

There is no disputing this fact just as it is manifest that these extensions to our senses have fundamentally changed our perception of the world – especially since it has become available everywhere at all times and is inter-connected. This certainly does not mean that the detour via language and the organization of thoughts in linear script has completely run its course.

It was not without reason that the alphabet provide to be a fruitful invention. Without it, discourses such as those in Greek philosophy, Medieval theology or the modern sciences would never have come about. Is it not surprising and does it not give food for thought that a media philosopher such as Flusser talks about the fact that something in spoken language itself calls to be “fixed in place, and in fact not so much in the memories of speakers and hearers, or in records or tapes, but rather in writing itself. Spoken language seems to rush toward writing almost on its own, to become a written language and so to achieve its full maturity. After the invention of writing, spoken language appears to be a preparation for a written language, to teach people hot to speak properly in the first place.” [3] Do the alphabet and the written word not remain relevant as the everyday school of speaking and thinking even if we act quite differently, immerse ourselves in images directly and in real time, can download information everywhere?

One aspect among many in the contest between the different ways of encountering the world and penetrating to its many-faced sensations, to understand and grasp them, relates to the question: Where with this excessive power of all the images, sounds and opinions circulating in the electronic networks will human critical faculties in future have a place – if not in speaking and writing? Will we in future not need a distance from the digital vortex around us, no media and no space in order to ponder things? “Writing set out to explain images, to explain them away. Pictorial, fanciful, imaginative thinking was to yield to conceptual, discursive, critical thinking. It was necessary to write alphabetically rather than ideographically to be able to think iconoclastically. This is the reason for denoting the sounds of a language. In speech, one talks ‘about’ ideas and ‘about’ images and, in doing so, stands above imagistic thinking, speaking from on high. As the score of a spoken language, the alphabet permits us to stabilize and discipline a transcendence of images that has been won, with effort, through speech. One writes alphabetically to maintain and extend a level of consciousness that is conceptual, superior to images, rather than continually falling back into pictorial thinking, as we did before writing was invented.” [4] Was the alphabet not invented in order to replace mythical speech by a logical language, “literally, for the first time, to ‘think.”? [5]

No one today really can say whether and when the transformation of image symbols from mythograms into ideograms and from ideograms into letters that started in primordial time will come to an end and what will take its place. The media expansion of our senses and the perfecting of recording will probably just as little have the last word in things as will commercial feedback on our behavior into gigantic data pools.

“The typewriter will alienate the hand of the man of letters from the pen only when the precision of typographic forms has directly entered the conception of his books. One might suppose that new systems with more variable typefaces would then be needed. They will replace the pliancy of the hand with the innervation of commanding fingers.”

In the rhythm of the body or the machine

With a view to the typewriter, in the above aphorism in his slender 1928 book “One-Way Street” Walter Benjamin was still as a matter of course relying on the “that… then” scheme. The lacking fingers and the nerve cords required have long since been activated and have taken the place of the ciustomary hand. Today, there is likewise no lack of systems of varying the font design. Just how directly the “precision of typographic forms” has entered into the conceptualization of books is something you mustr decide for yourselves. The rapid development and spread of electronic media has also included the typewriter. Who would have believed in 1984, when the “MacIntosh” hit the market as the first user-friendly “Business Machine”, that a few decades later not only the typewriter would have wandered into museum vitrines, but that through email and Twitter millions of people would be permanently typing away on pocket-sized Smartphones – often, it bears remarking using only their two thumbs.

As regards the typewriter, Friedrich Kittler’s gaze, firmly fixed on the hardware, revealed not only that companies such as Remington & Son transposed the standardization of individual parts practiced since the Napoleonic Wars with weapons onto the production of civilian writing machines, but also that the typewriter became a discursive machine-gun.[6] “A technology,” he wrote, “whose basic action not coincidentally consists of strikes and triggers proceeds in automated and discrete steps, as does ammunitions transport in a revolver and a machine-gun, or celluloid transport in a film projector.” [7] The praise of its heroic fire power is sung to this day, and quite literally sees the machine advantages enter the fray against handwriting.

The hand as part of the body follows its own rhythm. This has as little to do with the awkwardness of a mechanical activity as it does with the abstractions of virtual digital media and their Turing machines. Even the slowness of writing by hand, at least when copying out existing words, may prove to be an advantage in an age of constant sensory over-stimulation.

“Completely familiar. Absolutely revolutionary. As soon as you take it in your hand you notice that the Apple Pencil does exactly what you want. It responds to angle and pressure so that you can draw many different artistic effects. And its pixel-point precision gives you completely new creative opportunities.”

The hand regains the pen

If in this short ad you substitute the words “Apple Pencil” with “pen” or “biro” and “pixel-point precision”, then the statement will be no less accurate. Even if all you want to do is write bereft of any artistic effects. As so often, the very latest usurps the properties of the tried and true. It disguises itself, dons a familiar skin. Designer Raymond Loewy once called this the MAYA principle – Most Advanced Yet Acceptable.[9] Evidently it still functions, being as innovative as possible but not frightening anyone off. Handwriting – that’s something most people can handle.

So is the hand regaining writing and the pen? Will the zest of the writing utensil, controlled by the thumb, forefinger and index finger, and the wrist return rather than being abandoned, catapulted into the digital age? Technically speaking, not a big deal. So why not write on screen and hold a pencil in your hand that enables you to think in the usual linear way and order things, but also input it into the multidimensional world of the digital without great effort? Has such a magical pencil perhaps even the power to reconcile the analog with the digital, the liner with the multidimensional, distance with close-up?

We only discern the reach of truly historical processes with hindsight. Minerva’s owl only starts it flight as dusk approaches, when, as Hegel puts it, “a shape of life grows old”.[10] Who knows, perhaps the hand and the skills it has acquired down through the millennia will in fact be required at the next stage of technological development. A transformation of the pen into a hybrid utensil is not about to change much. The divide between alphabet and digital code would remain in place. Perhaps we must simply learn to accept that “the prospect of planetary literacy appeared as the equivalent of social and intellectual advancement” only for a short period of time.[11]

At the beginning of human development, the hand was nothing more than a tool with which to grasp. “From the Upper Paleolithic to the nineteenth century, the hand enjoyed what seemed like an interminable heyday. It still plays an essential role in industry, a few skilled toolmakers producing the operative parts of machines to be operated by crowds of workers requiring no more than a five-fingered claw to feed in the material or simply an index finger to push the buttons. But ours is still a transitional stage, and there can be no doubt that the non-mechanized phases of industrial processes are being gradually eliminated.”[12]

The rest is handled by the programmers, the software, computer-controlled plant, robots and 3D printers. There’s no denying the facts. Yet until further notice the pencil sits sweetly in the hand, and each day a mass of ink and other writing fluids will flow through pen nibs, biros, ballpoints  – however strongly the real rushes past us and crashes as a powerful wave of progress over our screens.

Thinking Tools
Design as Process: On the Creation of Writing Tools
Museum Angewandte Kunst, Frankfurt/Main
September 24, 2016 through to January 29, 2017

further article:
Completely familiar, absolutely revolutionary - Part 1
Evidently it is harder to dispense with the hand and its skills than one might think. It is especially trained and kept fit through writing. And those who write also train their capacity to think.

Completely familiar, absolutely revolutionary - Part 2
Evidently it is harder to dispense with the hand and its skills than
one might think. It is especially trained and kept fit through writing.
And those who write also train their capacity to think 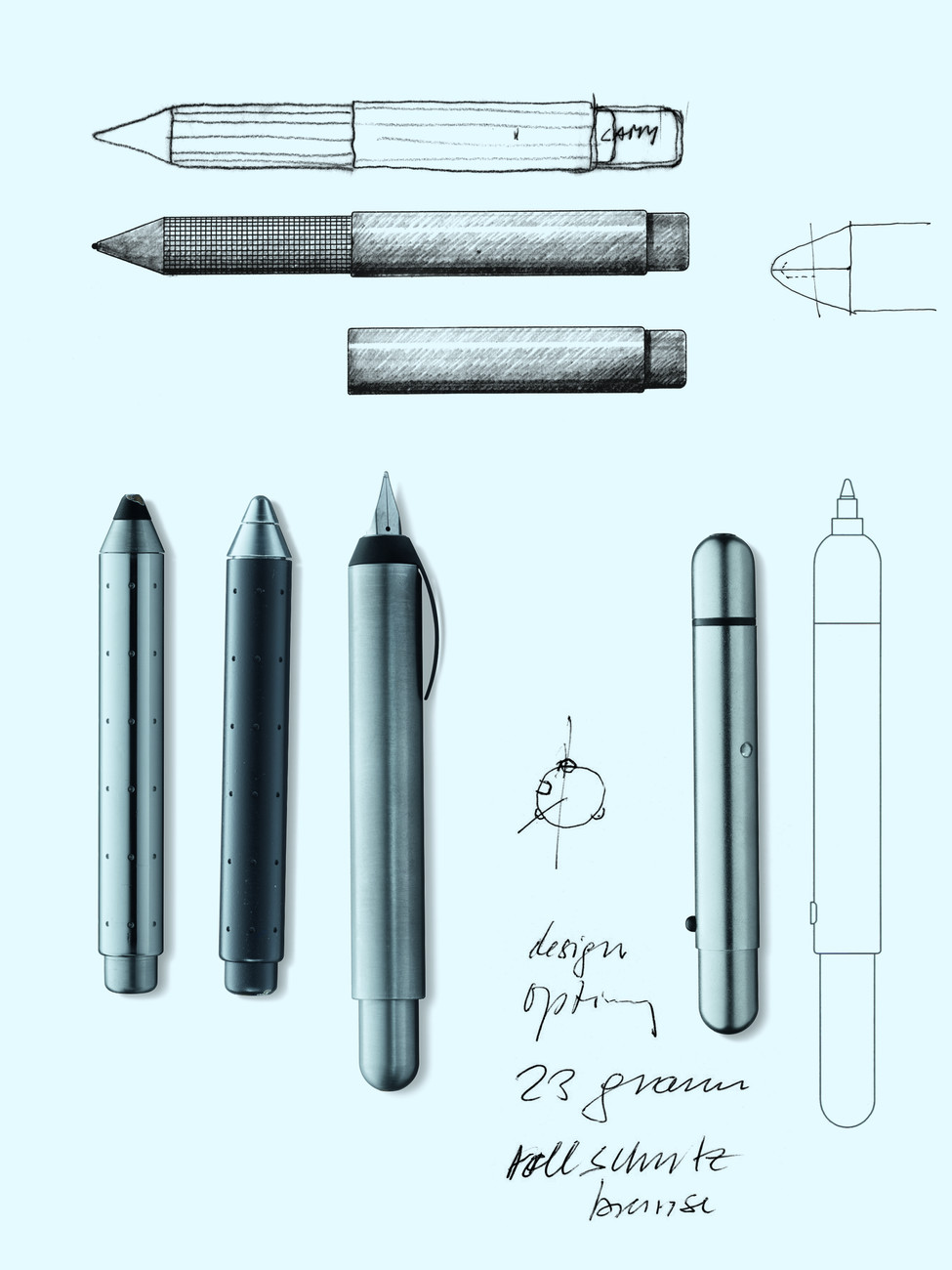 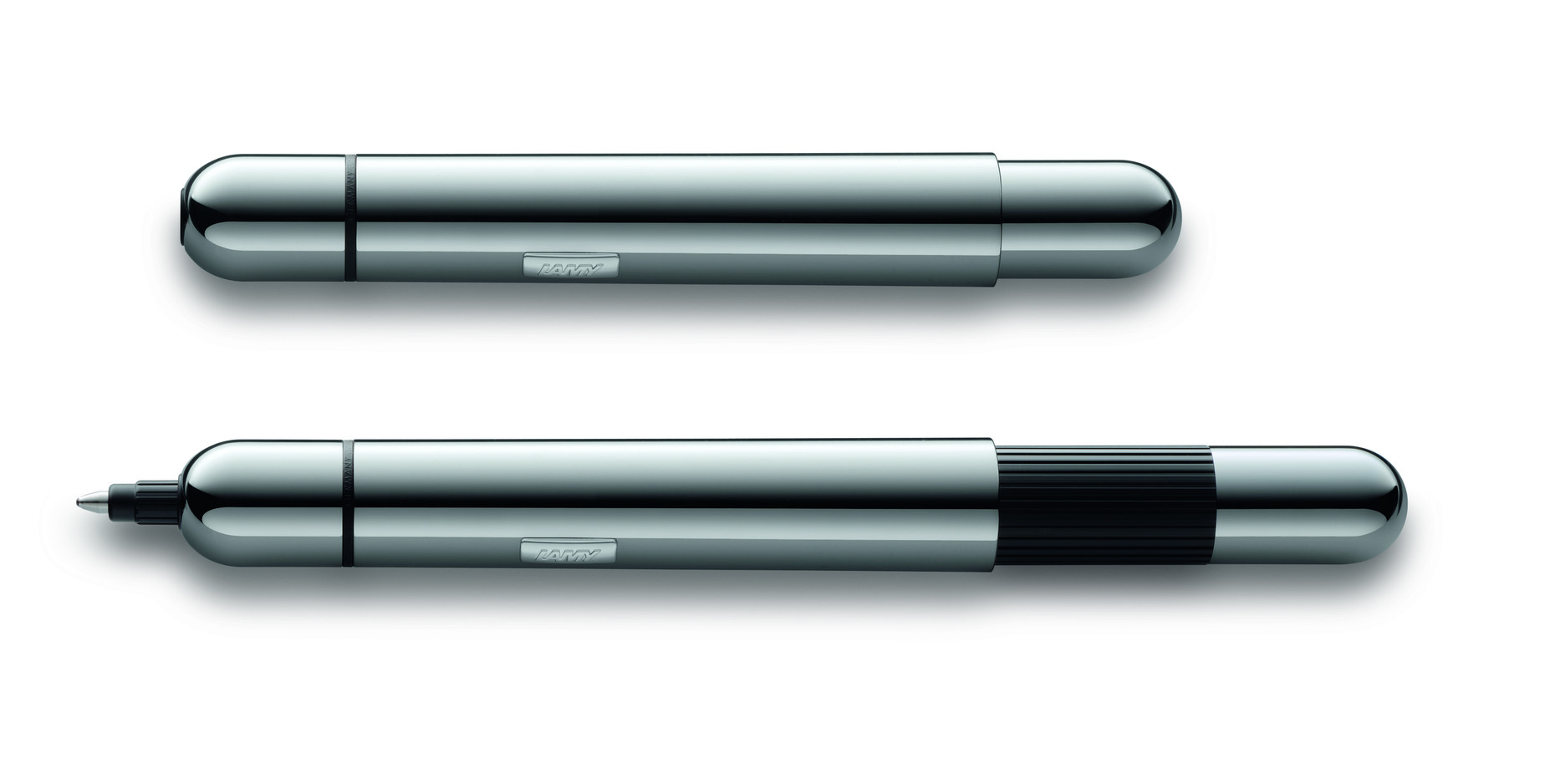 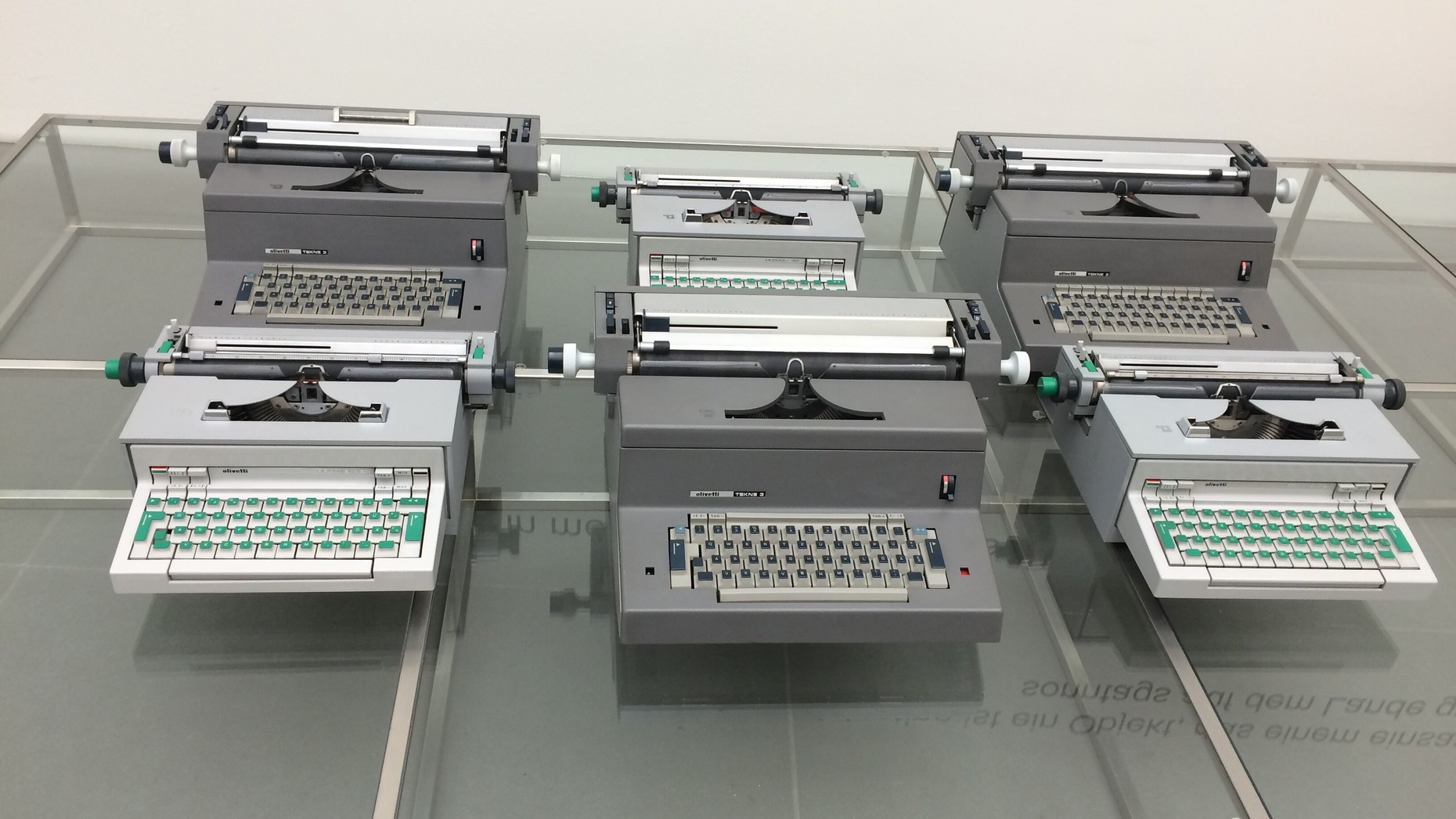 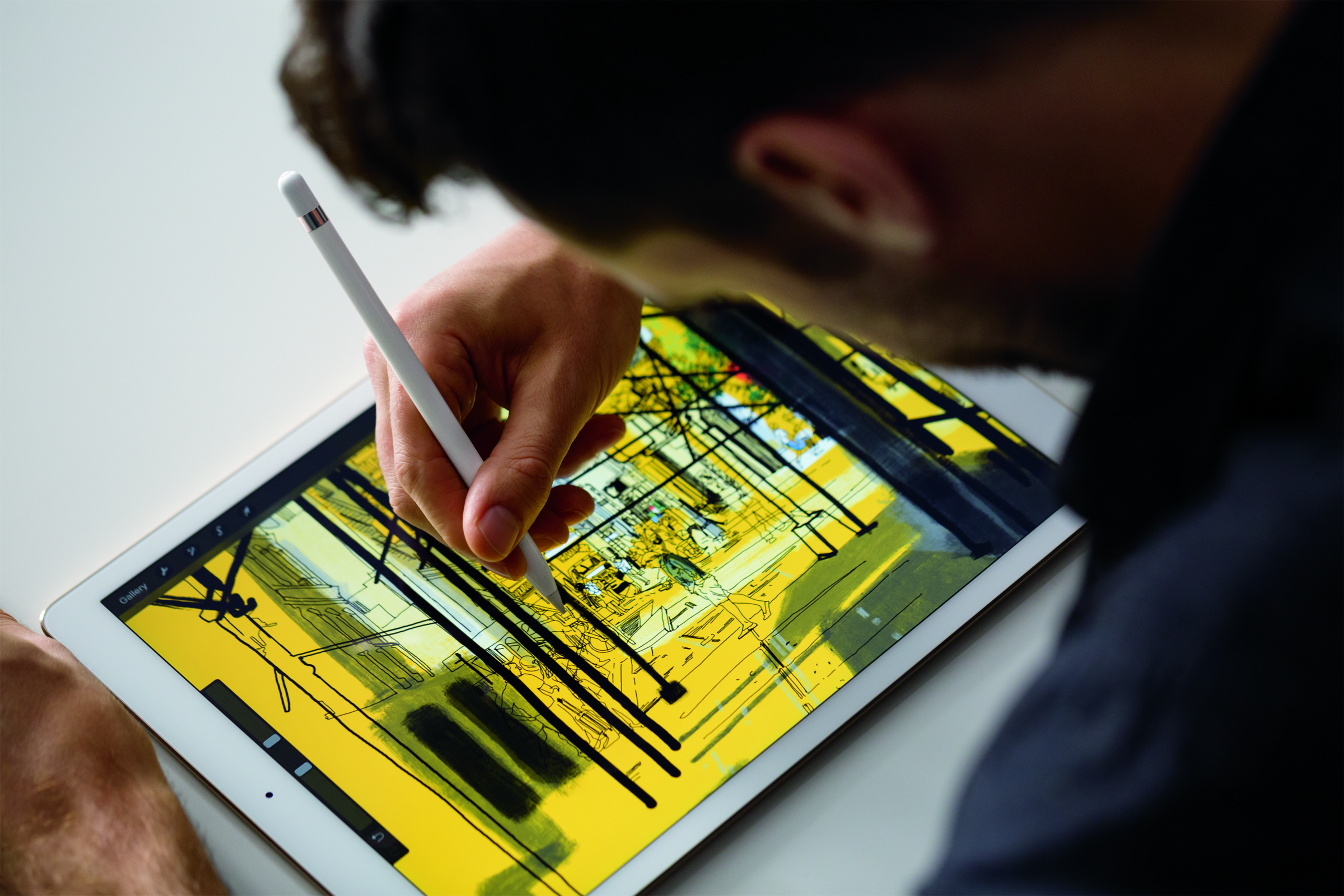