The “Crystal Mesh” lies like an ornament over the façade of the “Iluma” complex in Singapore. Irregular polycarbonate modules, white and in part translucent, make for an unusually varied image even during the day. But what looks like a crystalline façade textured expressively in keeping with Sixties and Seventies ideas in daylight, proves at night to possess an innovative dynamism. Integrated lighting technology ensures that the entire shell functions like one giant monitor, albeit one that clearly differs from the customary screens owing to the arrangement and surface of the façade and lighting elements. There is none of the usually regular surface. Instead, the architects at Berlin’s realities:united have created a colorful, extraordinary and above all dynamic façade, and with it the entire building.

Originally the façade was the “sunny side” of a building. It was the side of the edifice that offered the surroundings and viewers an impression on the building’s purpose and function, conveying its architectural thrust and relation to its setting. Often, the façade is more elaborately designed than the building’s other sides, boasting different, more valuable materials. It’s an idea that is enjoying a new lease of life with the media facades, a renaissance of displaying and presenting, yet in artistic terms in part goes far beyond the historical context.

There are images of media facades dating to the early decades of the 20th century, when for example the ad billboards on New York’s Times Square radiated colored light and the first simply animated neon strips reflected the glory days of Broadway. Initially, these first media facades were static, simple outsized posters usually adapted to perfectly fit the building. With directly referencing the building or its content in any way, they were simply a surface, an addition that pointed to something different, something external.

Contemporary examples such as realities:united’s “Crystal Mesh” exploit the diverse opportunities afforded by new materials, elaborate structures and complex control features to go a lot further and initiate a step change. The façade is increasingly dynamic. The changed image of the shell now offers a chance to forge new links between the building, the location and the function.

Do the media facades give rise to a communications tool? “I consider the media facades an expansion of aesthetics, as media facades per se do not generate any new benefits,” comments Tim Edler, MD and founder of realities:united. Architecture can, he suggests, be construed as the attempt to order the elements of the respective environment. Thanks to dynamic media facades, the building can now interact more directly and swiftly with its surroundings, location and with people, be they inhabitants or passers-by.

Back in 2003 the architects at realities:united designed the “BIX” media façade for Kunsthaus Graz in Austria. The architects’ initial idea of using a blinking façade to point to the exhibitions that take place at the end of the building has since given way to a complex installation that emerged from their critical inquiry into the gallery’s architecture and the technical opportunities available– all its details are aligned to the building. Instead of LEDs it uses the good old fluorescent tubes given their technical reliability. The key factors were the technology and the constrained budget, spawning a rough matrix with 930 Pixels, each a fluorescent tube. For all the technical limitations (the projection screen has only a fraction of the resolution of a normal TV and is only monochrome) BIX can be used in a plethora of way thanks to a specially developed software. The images are either purpose-made for BIX or simply result from the exhibitions shown at Kunsthaus Graz.

Alongside the artistic sides to media facades, there are also interesting attempts to integrated more advanced technical concepts into these innovative building shells. The “GreenPix” project by US architects Simone Giostra & Partners went live in 2008: it is a combination of display elements with colored LED and photovoltaic modules in a glass curtain wall. The architects say that the media façade in Beijing itself generates all the energy it needs. The electric energy accessed during the day by the PV modules is then used to power the LED elements during the night.

All the above examples construe the media façade as an independent communications platform. The shells are not simply grasped as simple screens to present messages or ads, although many an investor requests this. And even if out-sized screens are inevitably forever landing on facades, there are approaches that seek to integrate these presentation areas into a larger conceptual frame. realities:united have outfitted one Singapore office block not only with a large ad screen but also with dynamic luminescent elements. Developed in 2008, this façade installation has morphed into the “Architectural Advertising Amplifier” in which the programming enables the elements to respond in color to the ad clips shown. In this way, foreign content was in a sense integrated into the concept, as it were broaching a dialog between the building and the video material that ran. 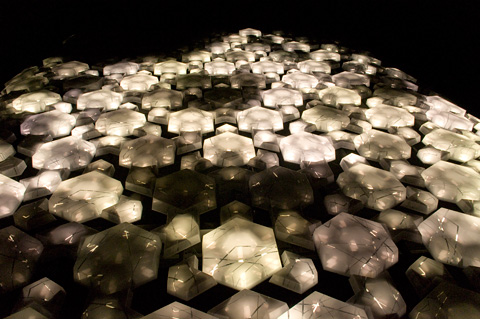 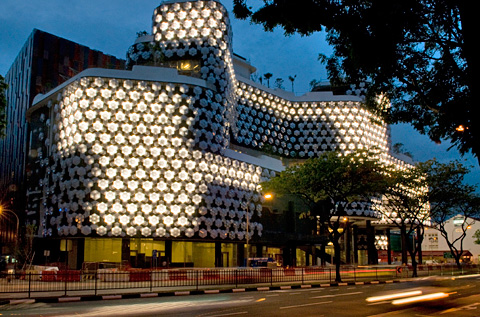 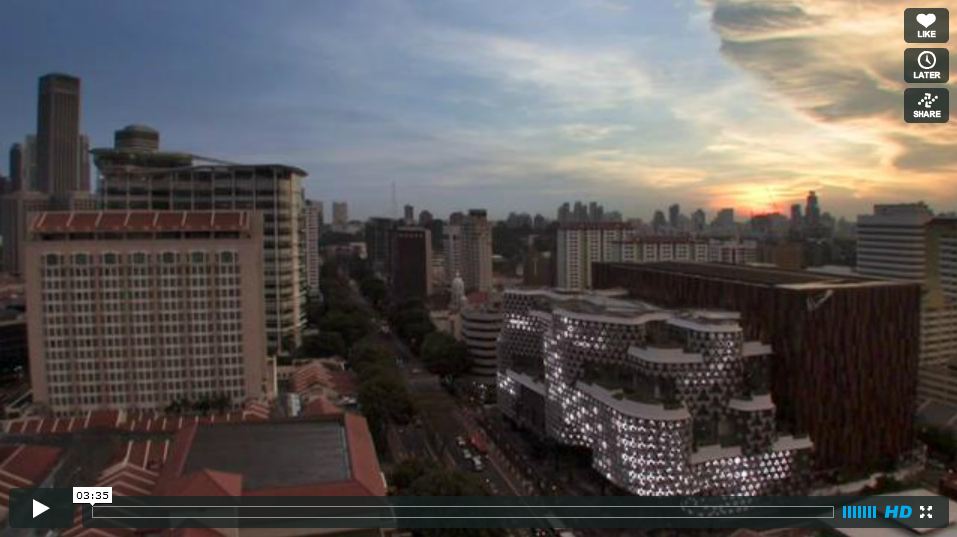 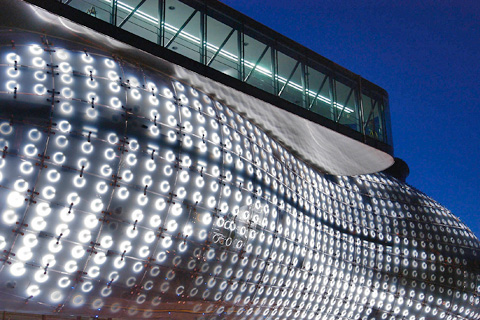 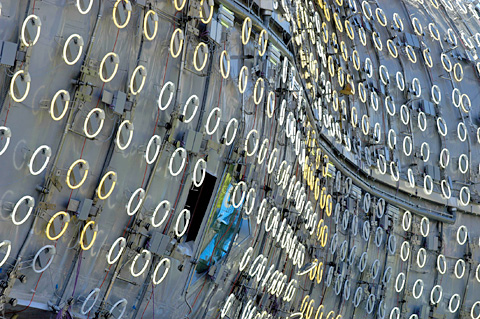 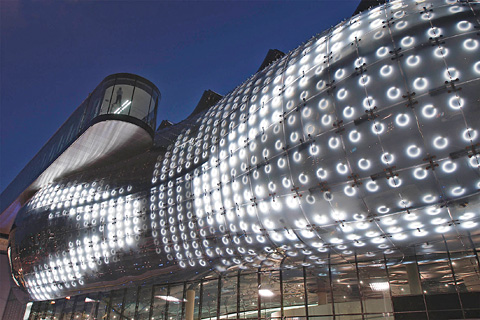 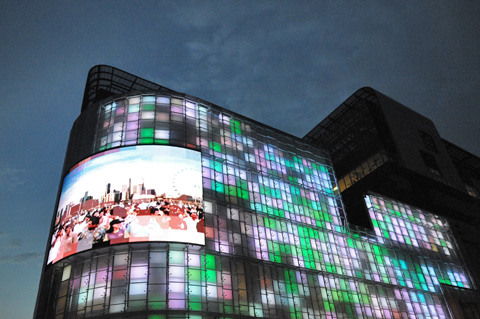 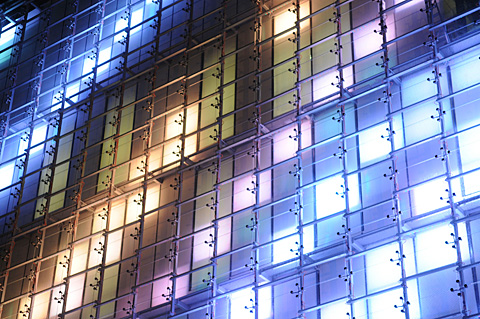 At night, hundreds of computer-controlled LED lights illuminate the façade of the building, photo © realities:united The media façade of the complex building "Iluma" in Singapore is called “Crystal Mesh”, photo © realities:united 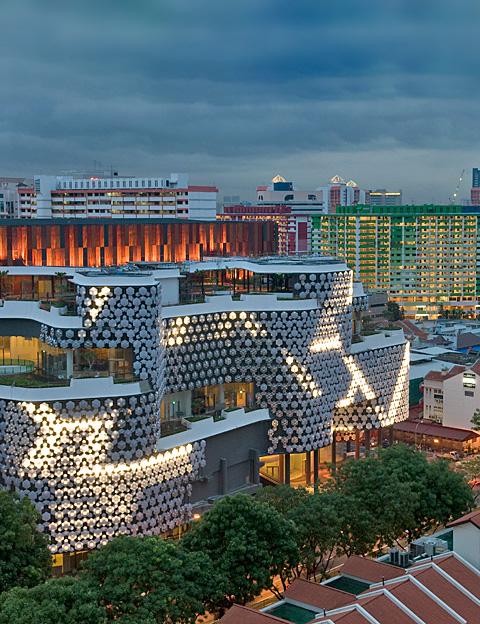 From a distance, the façade looks like a giant monitor, photo © realities:united 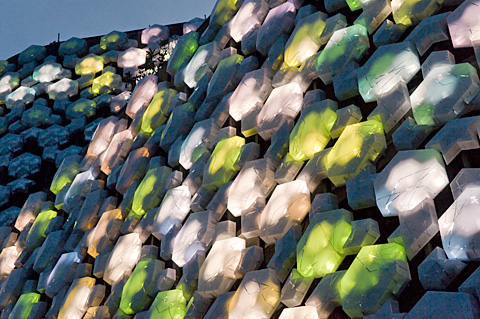 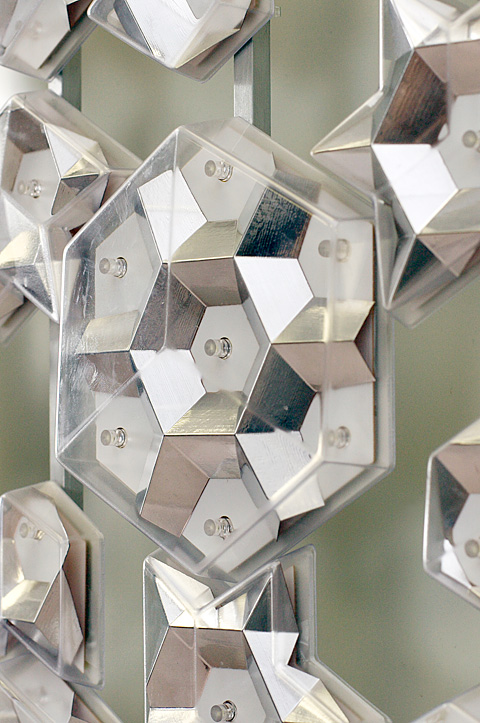 The media façade consists of hundreds of translucent polycarbonate light modules, which are shaped like crystals, photo © realities:united 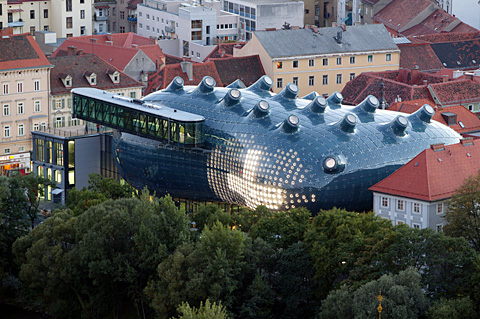 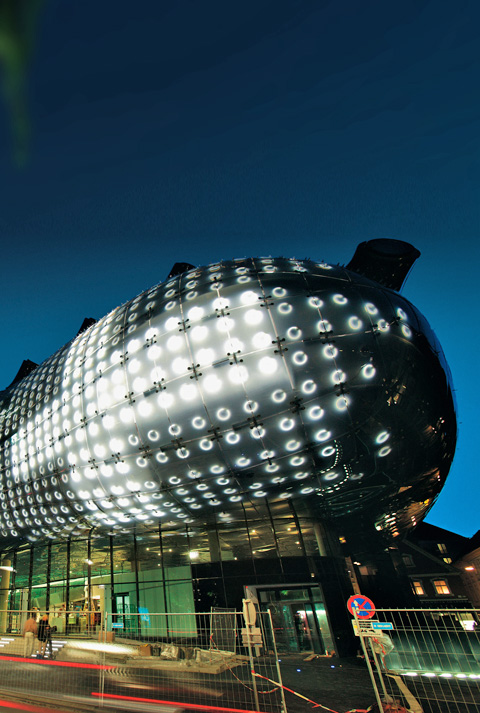 Current exhibitions are projected onto the façade of the Kunsthaus in an abstract way, photo © Harry Schiffer; realities:united 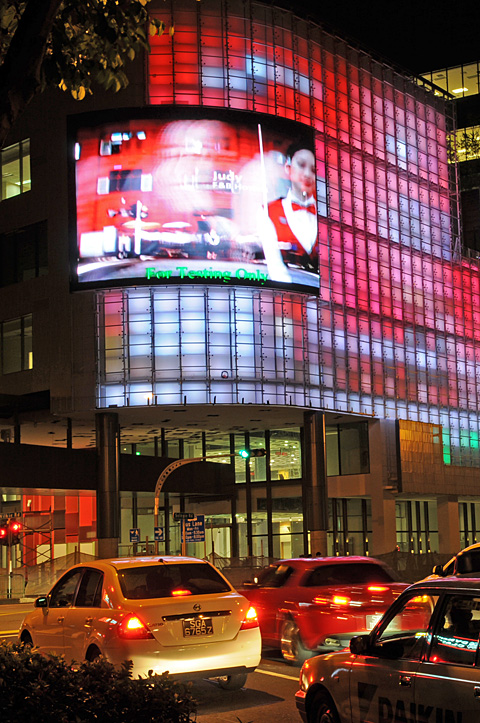 Not only the advertising screen attracts attention, but also the dynamic lighting effects, photo © realities:united 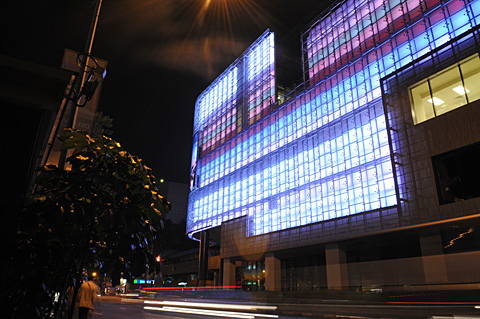 The colour and sequence of the light show responds to the advertising videos on the display screen, photo © realities:united 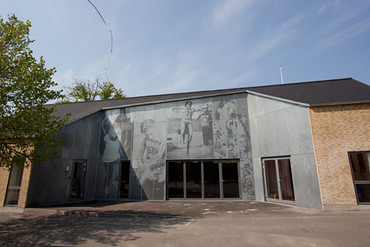 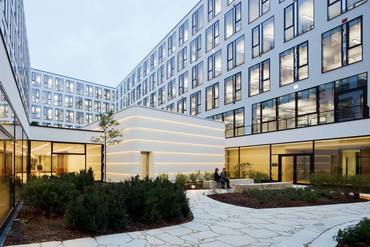 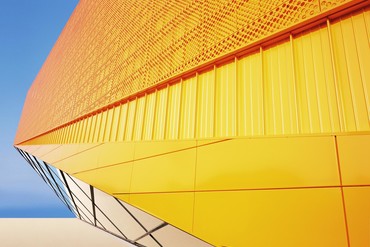 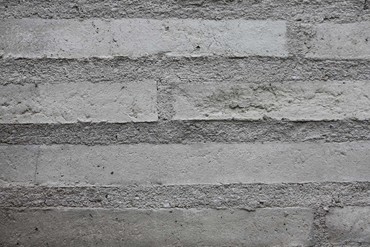 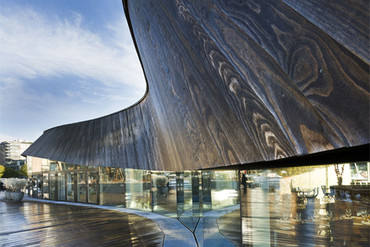 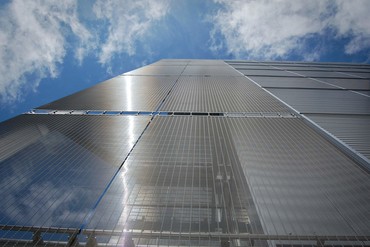 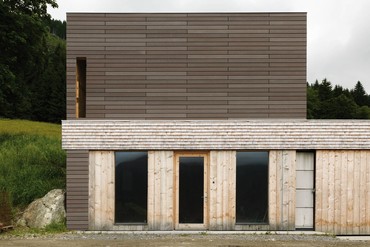 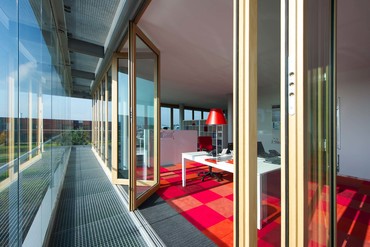 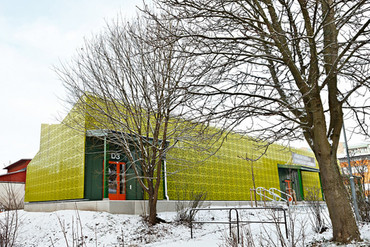