When Elephants fight, it is the frogs that suffer

What does Documenta 14 say about the current state of the world? What role do the curators play, and what role the artists? A commentary.
by Thomas Wagner | 6/19/2017

"The calls for a morality that would be more than the practical side to philosophy are becoming ever louder and the traces of it ever clearer. The talk has even already touched on religion. It is time to tear the veil off Isis and reveal the mystery. Anyone who cannot bear seeing the goddess should flee or rot." – August Wilhelm und Friedrich Schlegel, aus der Zeitschrift Athenaeum, ausgelegt in einer Vitrine in der Neuen Galerie

Documenta 14 in Kassel does not set art dancing. It does not even seek to enlighten, but primarily to preach. To this end, it paradoxically declares that it is time to unlearn all our expectations of art or what we think we know about it. It suggests that a completely different, political lesson needs to be learned instead – one for which art simply provides the visual materials. Thus at Neue Galerie Pélagie Gbaguidi asks: “How can education contribute to cleansing the mind: that there are no secondary creatures, but that the birth of life is a value per se. That all human beings have a right to a cradle.”
There is no talk of the joy of art, of understanding or of the joy of cognition; instead, the (falsely Eurocentric) mind must be cleansed in order at long last to think horizontally and to ensure the equality of all is the basis of a new Humanism. In the name of this notion, and it is hardly artistic, the D14 categorically presses charges against the state of the world – more on behalf of one Robespierre than one Friedrich Schiller. The view it takes on our contemporary world does not have its roots in art, but in a particular variant of political theory. D14 makes use of artworks as proof of every conflict that ever existed, of every historical injustice that ever happened. In this regard, the view D14 affords of the imperfect sides to our globalized world resembles that through the tubes that Hiwa K. has erected in front of the Documenta Hall: On the one hand it directs the eye to the misery caused by politics and, on the other, furnishes it with the means of art and takes up comfortable lodgings within it. The curator as educator simply derives his legitimation skillfully and in a pseudo-democratic way – after the event. If more people flock to the current Documenta than to the one five years ago, then everything must be right.

In much of what is on view in Kassel the focus is on power and money, on misery, colonialism and slavery, poverty and finance capital. Art as art has as little place in the project of general popular re-education as do irony, wit and humor. It is with corresponding stringency that concepts and terms such as diversity, migration, coloniality, postcoloniality, decoloniality, gender, transgender, dehierarchization and decentering are spread out before us in a synoptic and in part historical perspective. Here, the symbolic forms and potential of art are not held in high esteem and at most tolerated; the emphasis instead is on attesting to a morality that is leveled against all traces of colonialism and Eurocentrism, as is visibly evidenced by countless documents of the oppression of the Other. What D14 seeks “beneath the exploded shadow of the Revolution” is a different concept and different images of the present, a present in which (if one believes the curators) art is solely justified as an instrument of morality. In the D14 Reader, its Artistic Director Adam Szymczyk states in this regard: “The question as to what is the state of freedom, and we do not mean a freedom limited only to artistic expression, has still not been answered.” Is art not allowed to be free as long as the world as a whole is not?

The guilty parties are swiftly identified from the viewpoint of an all-inclusive postcolonial critique. Above all Europe, but especially the Germans are constantly named in statements by the curators as the people who caused hierarchical conditions, committed historical crimes and raised hegemonic claims. The perspective the curators consider so wrong is now to be corrected, history to be rewritten, and the visitors educated in this spirit. To take one example of how this works: Greco-German relations are, with a view to Athens as the first stop of D14 and the learning process initiated there, a good place to illustrate the analysis and how the situation should be corrected. It starts with Johann Joachim Winckelmann, whose “pioneering work ‘History of Ancient Art’” of 1764 not only, or so we read, “laid the foundations for the newly emerging science of classical archaeology,” but also and precisely “permanently defined the language of art history with the mythical ideal of Classical Greece as the forever present horizon” of thought. Winckelmann above all proved to be “the untiring champion of the dehistoricized aesthetic that arises from this ideal,” although he never himself set foot on Greek soil: “‘His’ Greece was to remain an invention of his imagination.” The architectural echo of Winckelmann’s “Prussian enthusiasm” is to be found in the oldest museum building on the Continent, namely the Fridericianum in Kassel, flanked by items of booty “brought back from Greece by armies of mercenaries from Hessen,” for example a “pair of marble ears” that are now permanently at home in Schloss Wilhelmshöhe. Objections, alternatives, opposition, from this perspective there was none of that.
The relationship of German dominance, so the D14 hypothesis, instead simply continued with Otto I as King of Greece, with Karl Friedrich Schinkel’s 1834 “proposal for a royal palace on the Acropolis” and with Leo von Klenze’s 1846 “idealized prospect of the Acropolis and the Areopagus in Athens.” The idealizing eye, purportedly coupled with hegemonic intentions, even extends to a sketch made of the Acropolis in 1956 by Theodor Heuss, former Board member and Managing Director of Deutscher Werkbund and from 1949 to 1959 first President of the Federal Republic of Germany.
One can and must discuss all these things and how they should respectively be evaluated. What is debatable, however, is whether a Documenta is the right venue for such a debate, a show that targets the broader general public. Should the visitors (with no prior knowledge, no sources and bereft of any historical context) possibly simply believe what is placed before them? Or are old resentments simply being unearthed again here in order for educational purposes to be woven into a narrative where the plot is predefined?

While the idealizing and mythicizing notion of art (in the spirit of early Romanticism and German Idealism) is denounced as ahistorical and colonialist, the cyclical time of (purportedly authentic) ritual is served up as the counter-program and way out, just as technology unchained is returned (via the Greek concept of techné) to the hand and its crafting. This seems all pretty naïve at the beginning of the 21st century. What is more, the fairly undifferentiated insistence on (arts &) crafts and the folkloristic itself contains a bland and ahistorical streak of Romanticism. Not to mention the cheap and truly ahistorical insistence on calling anything authentic that fits the curators’ own view of history and attacking anything that does not.

As regards the wish to educate the public, the D14 is firmly part of the lineage of the world art exhibitions in Kassel. The return to Germany in 1955 of the ostracized, of people and their art who had been demonized as degenerate, for the first documenta was much more than simply a wish to appease. What is also so irritating about the current edition is the accusatory, aggressive tone throughout the press conference that makes everyone (with the exception of the curators, of course) responsible for the state of the world, for racism, neocolonialism and the oppression of the Other. Here again what we see is that the emphasis is evidently not on aesthetic experience, not on Enlightenment, not on differentiation and also not on improving or changing things, but clearly on deciding who is guilty and presenting oneself as superior and knowledgeable.

As if we didn’t know about the injustices committed in our name. As if we hadn’t long since heard and seen how radical things can be, and what it means artistically if trite attitudes become form and artists are freed of the abuse of a type of realism that can all too easily be controlled and deployed for specific purposes. As if we needed to be moralizingly instructed from what is just as dubiously a one-sided perspective as our own about the state of the world and were not adult enough to discern what has gone wrong and is still going wrong. As if we couldn’t discern when art is not free to evolve as it wishes and is enthralled by an ideologically shaped view of things, of whatever ilk. As if we were not able to see the rupture that gapes between a pretended openness, a pretended modesty, and some patronizing superiority that rises up above art and the viewers and the participators. As if we did not love art precisely for the fact that it is more than a mirror of changing opinions and political views – and into the bargain more than able to resist all forms of instrumentalization. As if we could not distinguish between the reality of aesthetic experience and a gesture driven solely by a particularist interest.

While you stand on a bridge in the Karlsaue meadows listening, with assistance from Benjamin Patterson, to the frogs croaking and the threatening sound of brushwood breaking somewhere in the bushes, alluding to larger animals coming your way (Patterson’s title makes this clear, fires the imagination and, this time with much irony, fans our fear: “When Elephants Fight, It Is the Frogs That Suffer”), you realize something: Time and again art manages sublimely to annul prevailing demands and notions of reason and their validity. That is not its weakness, but its strength. 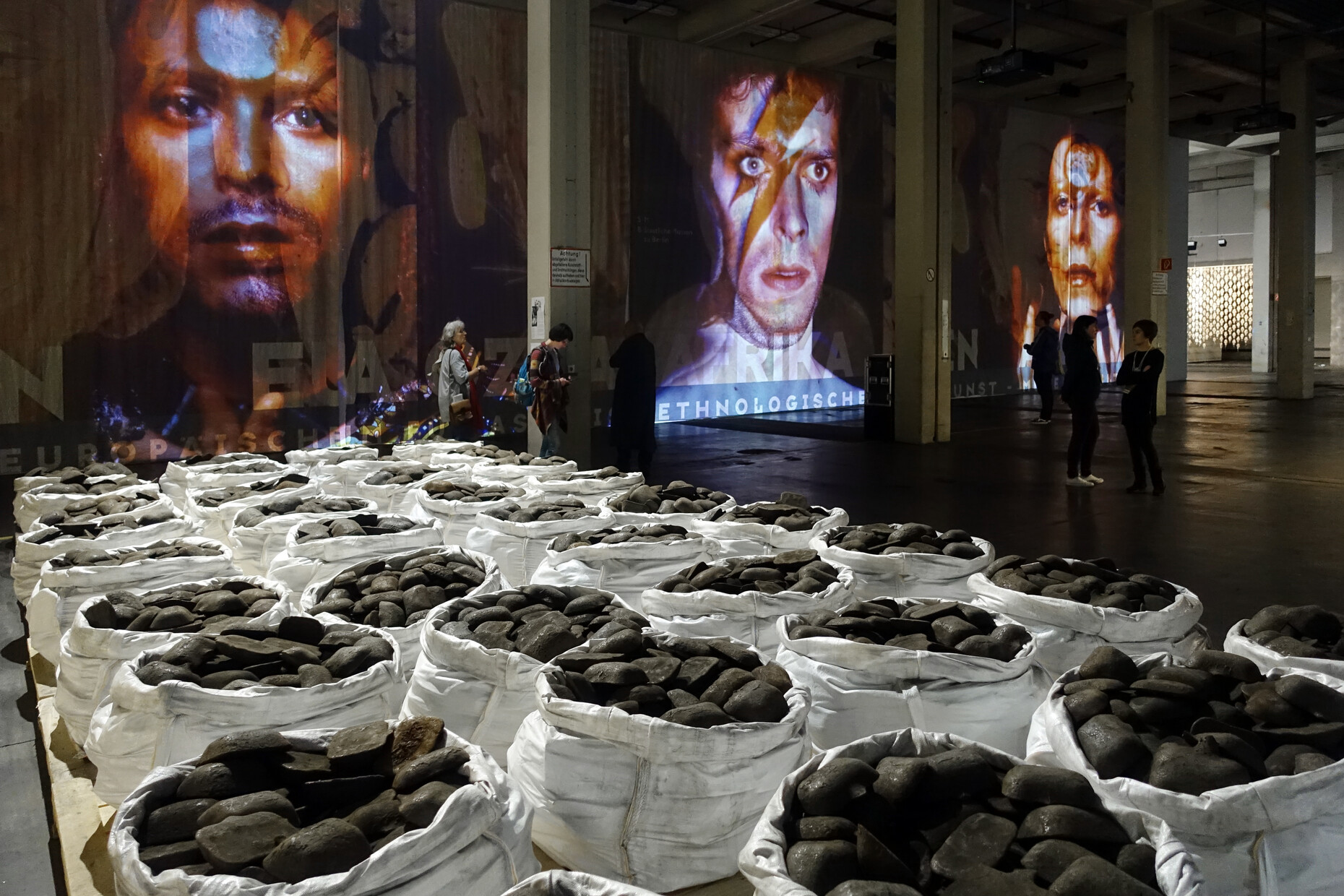 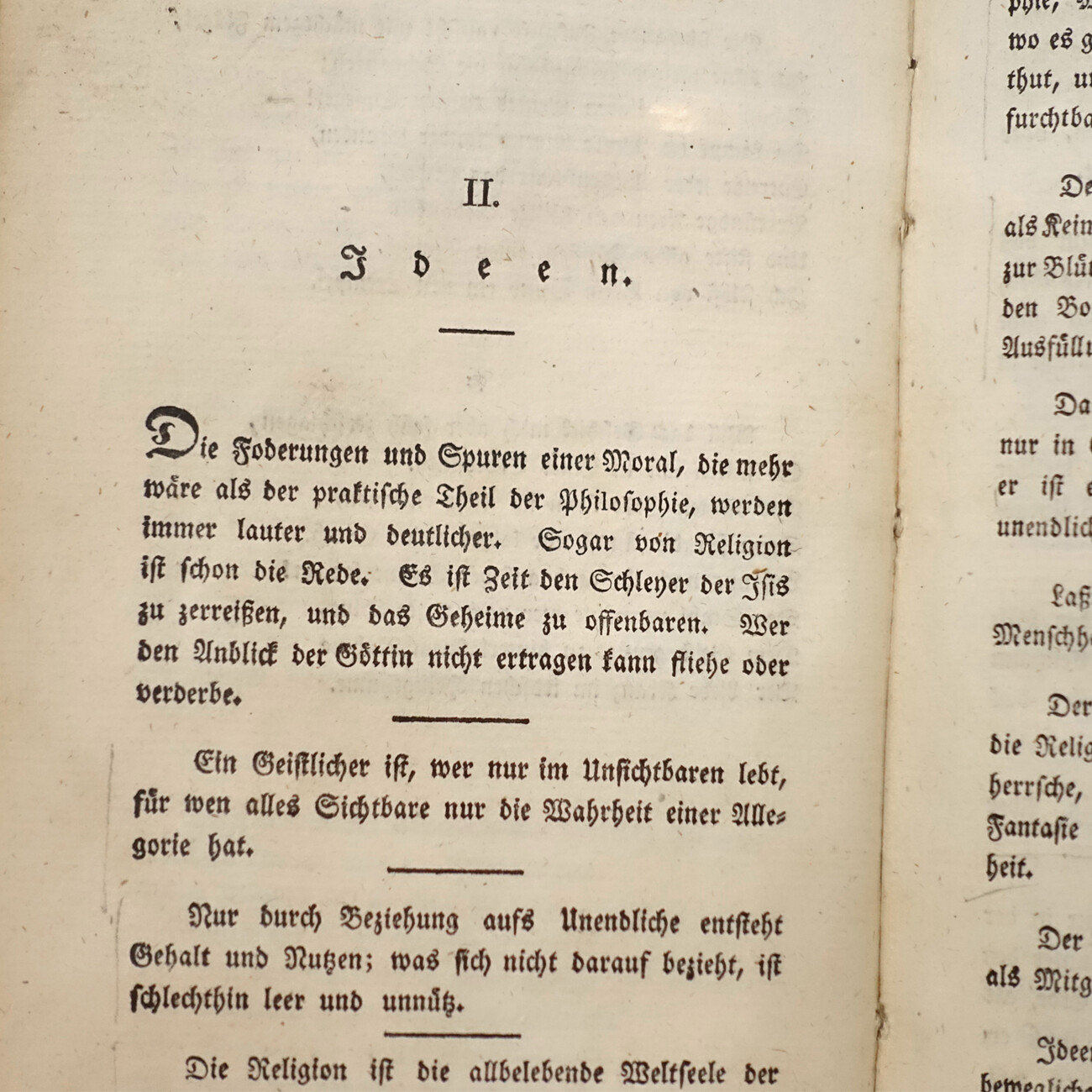 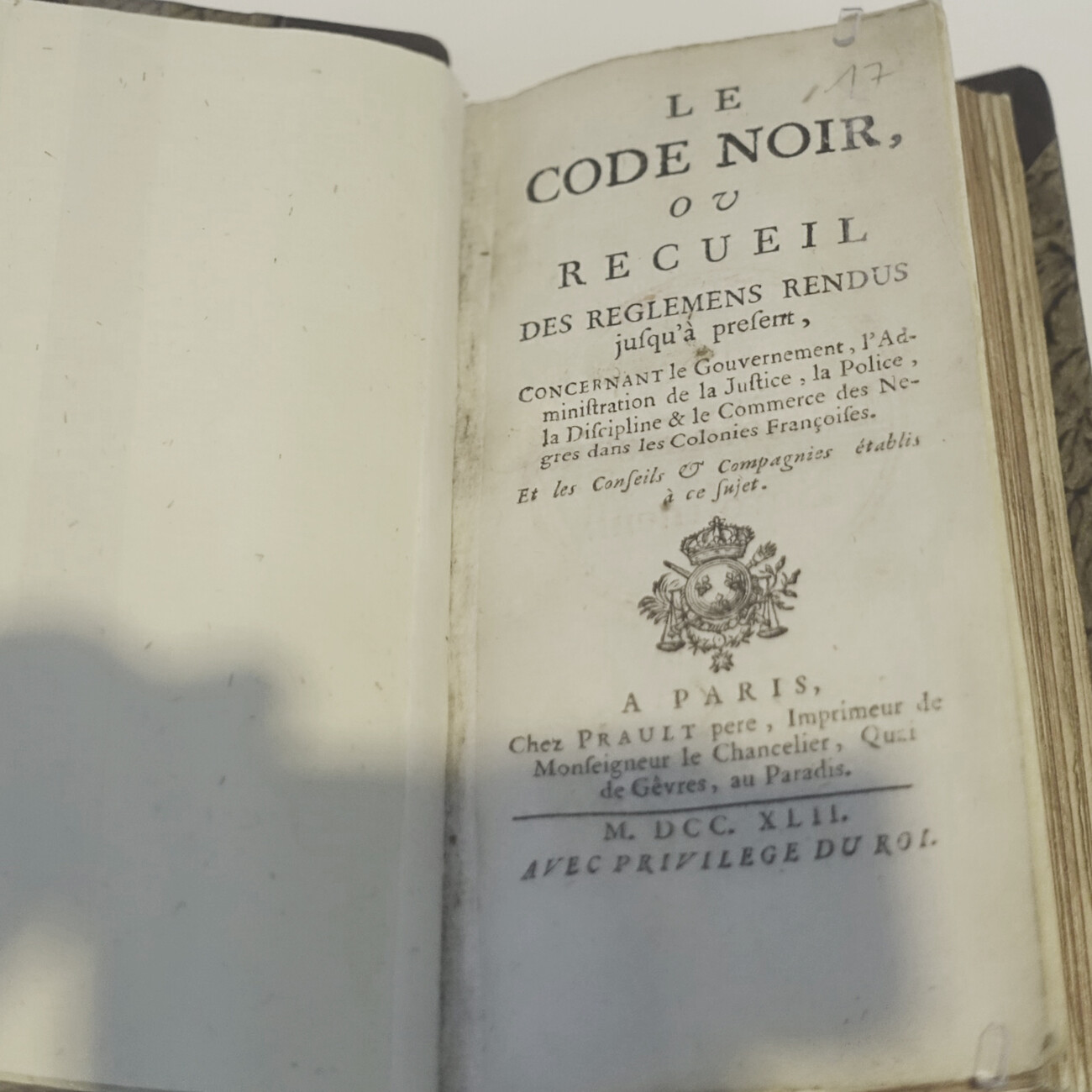 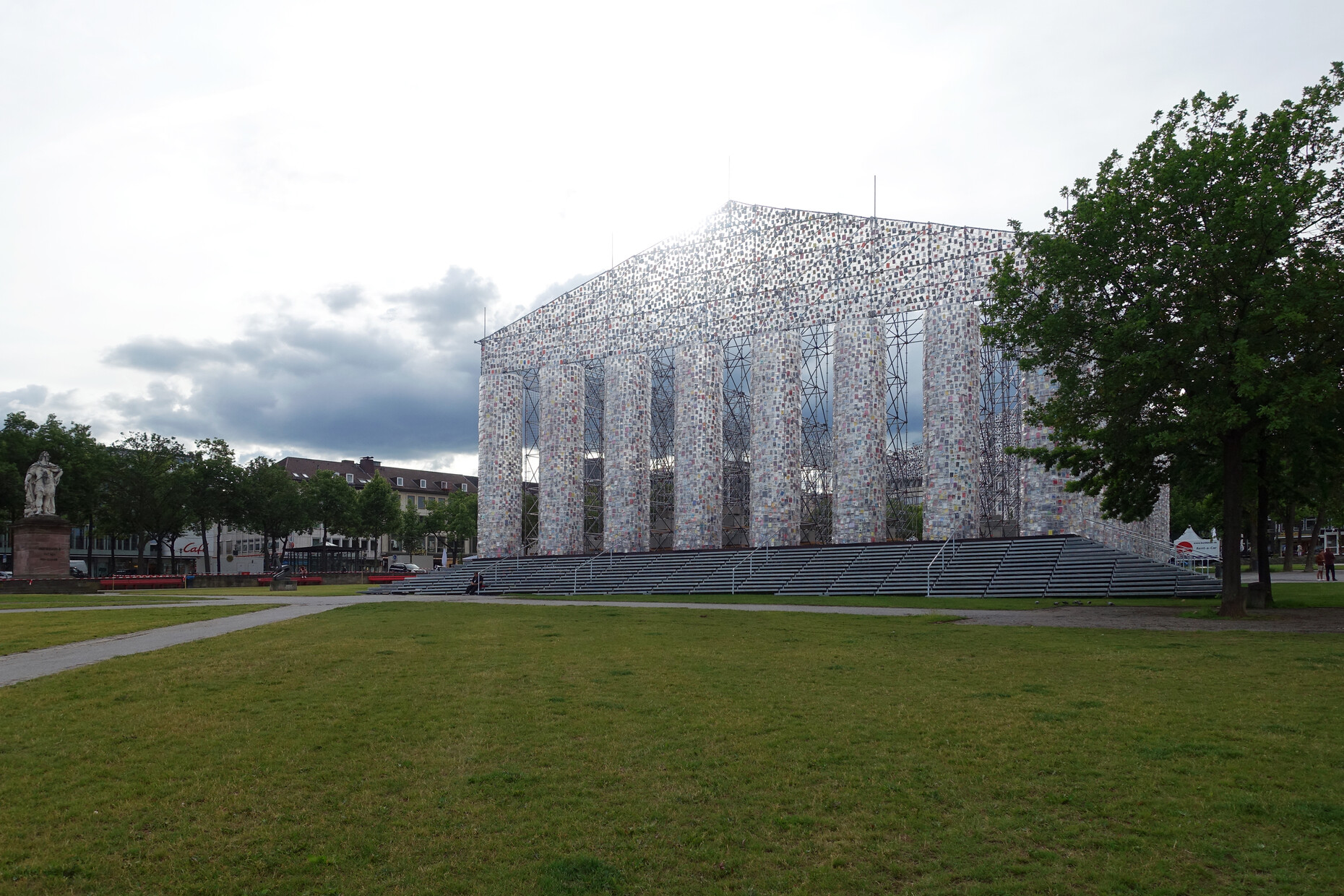 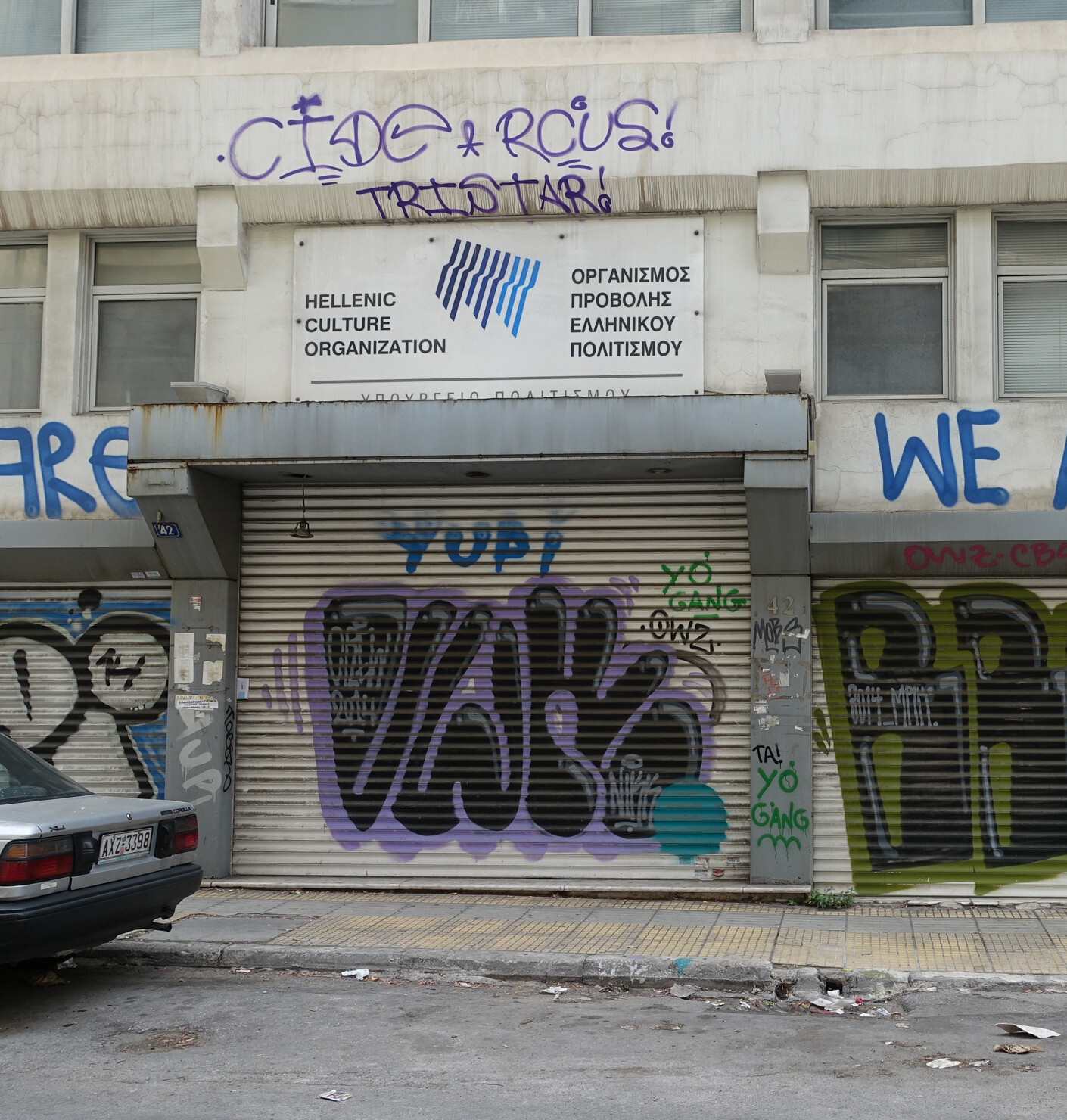 For the first time in its history the Documenta is taking place not only in Kassel. The first exhibition venue is Athens. Impressions from a city that is meant to be a prime example of the precarious state of our present age. 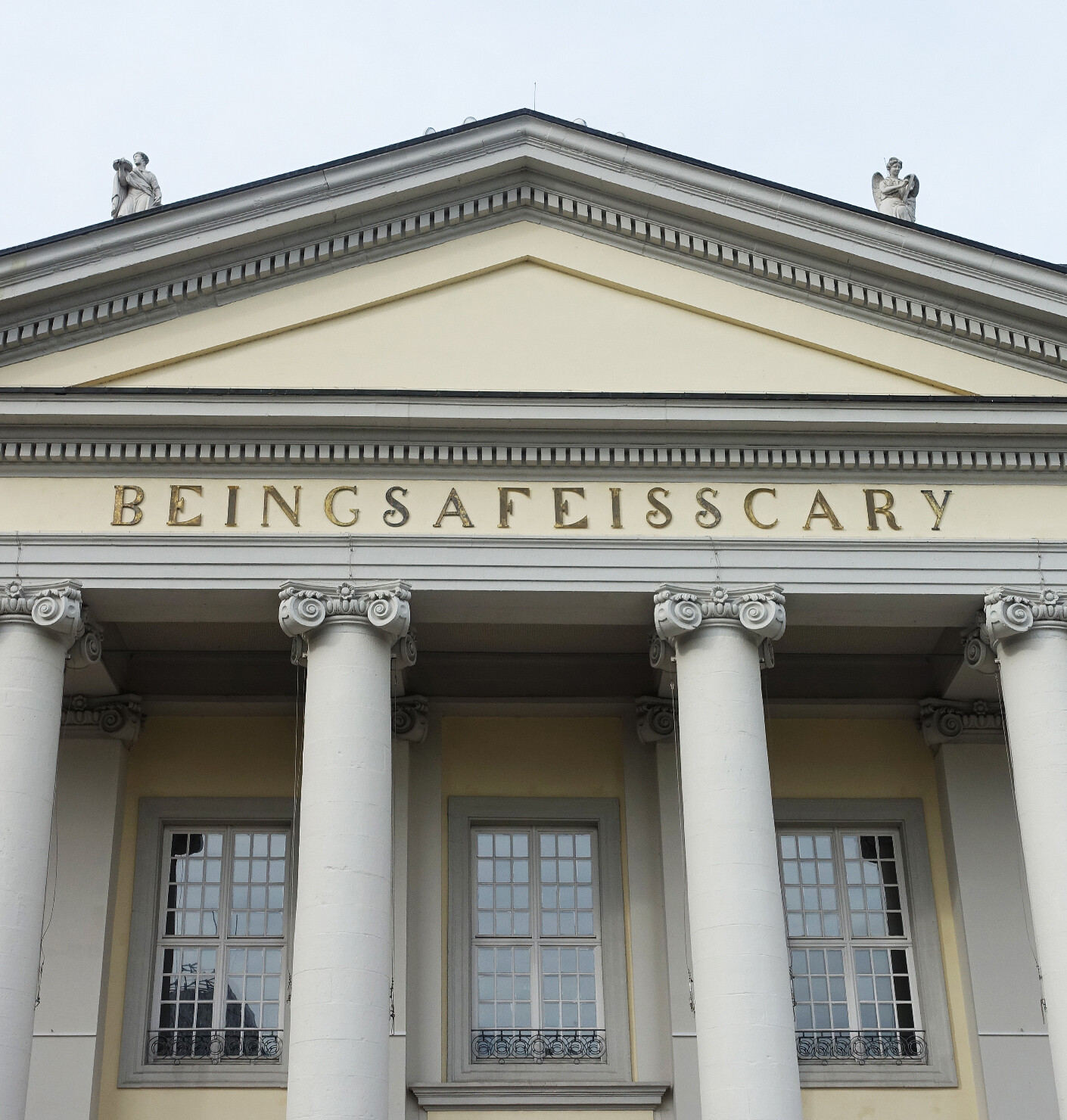 For the 14th time the Documenta in Kassel has opened its gates on June 10th. We show the highlights. 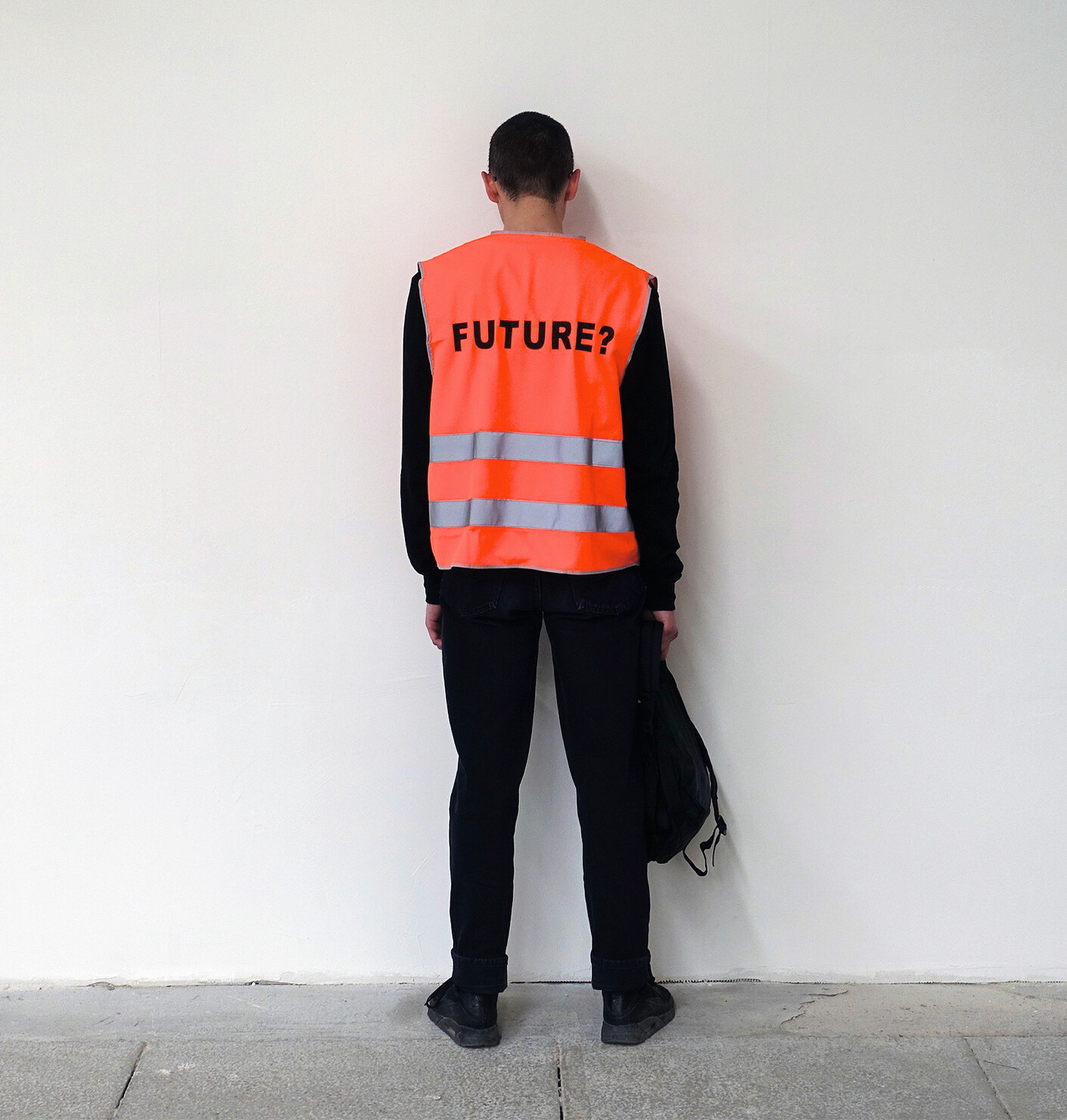 Stand still and gaze over the Med

Here and there it’s fun to take part, but it comes at a price. The central “Viva Arte Viva” exhibition orders art by concept and evokes the power of origins. Observations at the 57th Venice Art Biennale. 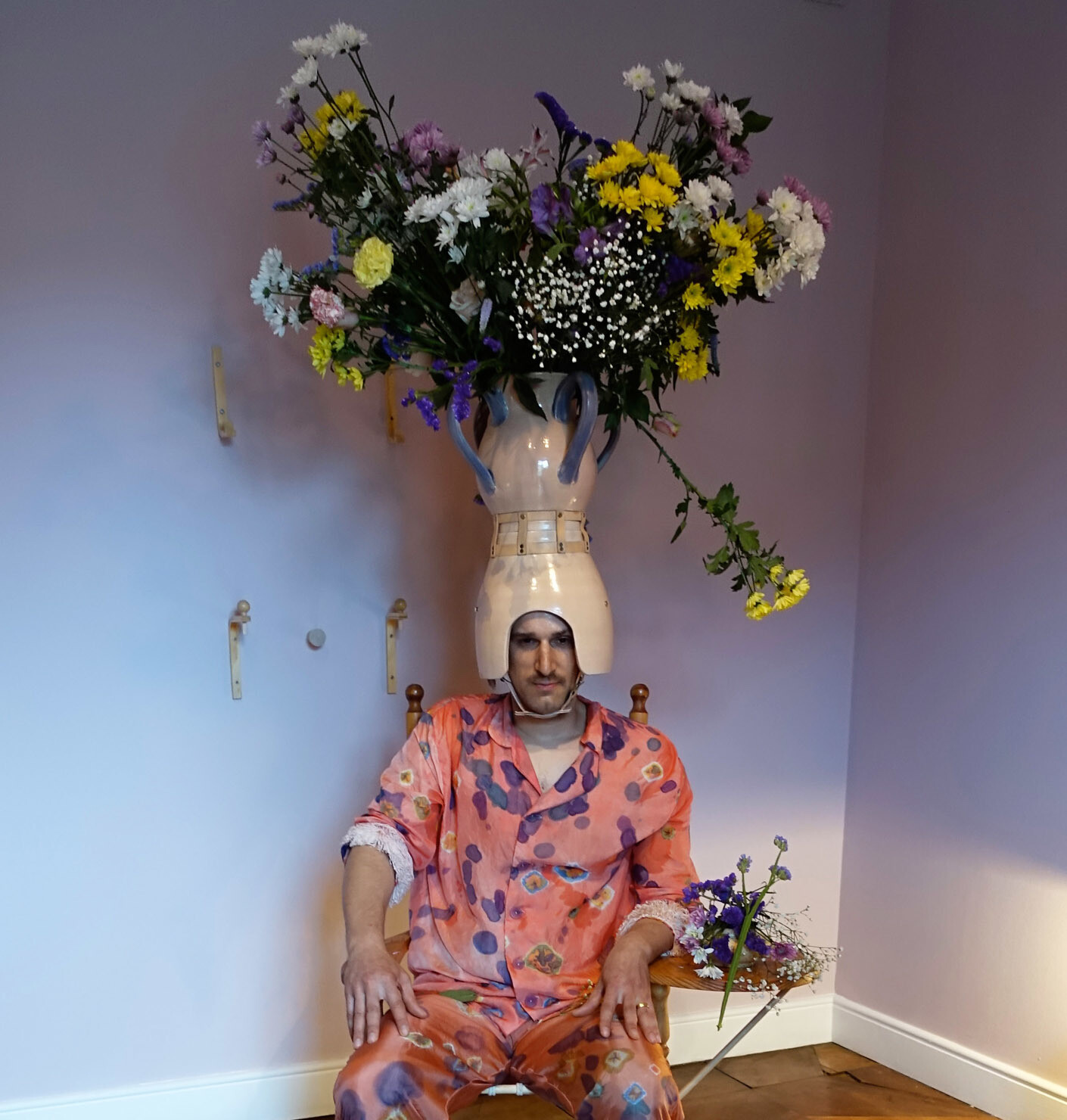 In Christine Macel’s central exhibition, all too much centers around communities, artists, books, refugees, and shamans. In the Arsenale and elsewhere round town the focus is less driven by world view. 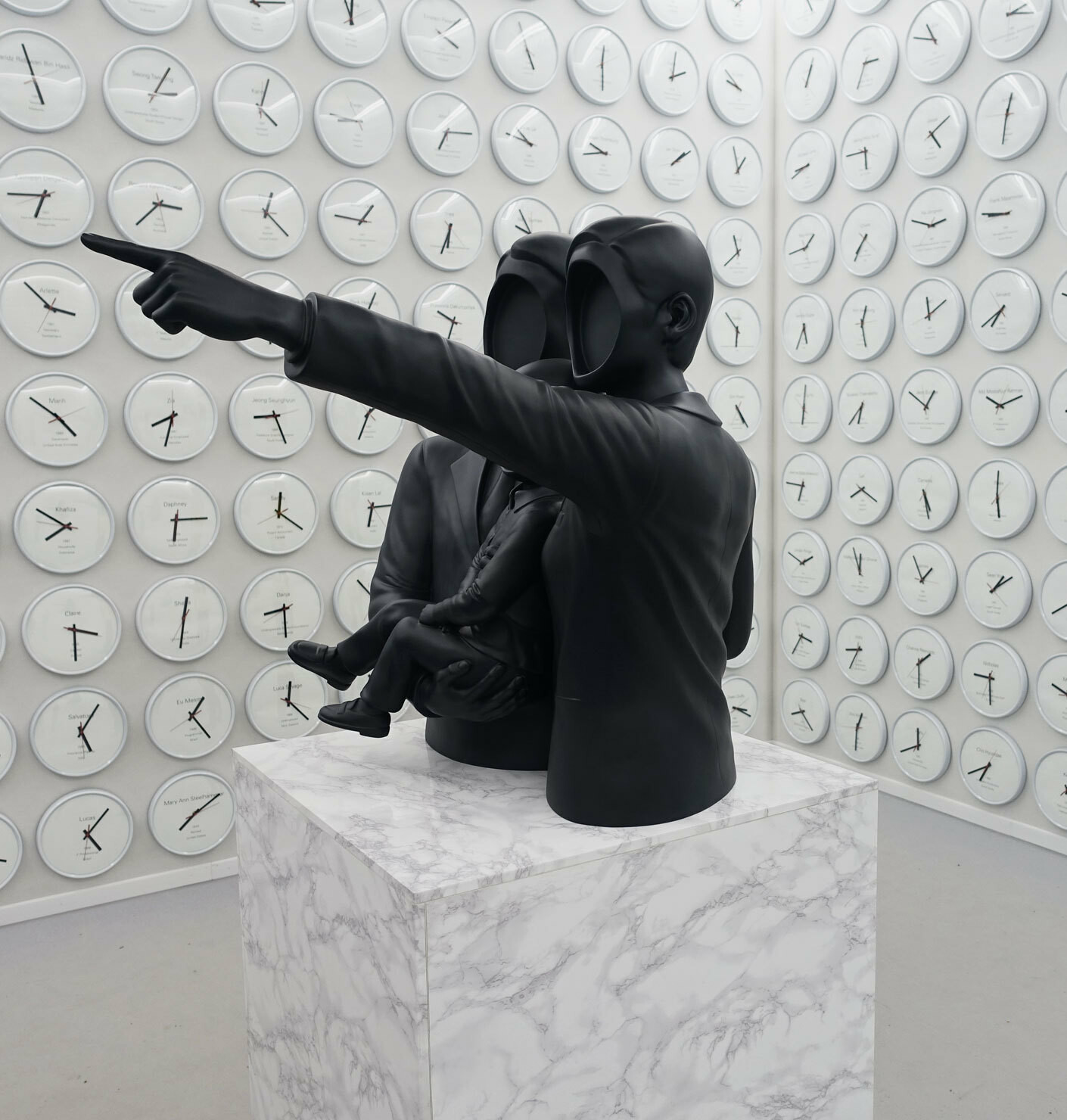 Venice calling "Viva Arte Viva": That's the motto of the 57th International Art Exhibition. And we invite you to join our tour to the most interesting installations of the Giardini.