Obituary
For him architecture was always an art

In February last year the Cologne-based architect Gottfried Böhm happily celebrated his 100th birthday. The City of Cologne, the archbishopric – one of his most important clients – and naturally the architecture community as a whole honored him with a wide range of activities. He was not able to attend everything but he enjoyed it none the less. He received many honors during his lifetime. Other than Frei Otto no other German has ever won the Pritzker Prize, the “Nobel Prize for Architecture”. Hardly surprisingly, he was considered the doyen of the German architectural community. Despite or perhaps precisely because of his highly individual architectural language but also thanks to his personality he was held in very high esteem by his colleagues. He was not subject to hostilities and equally this sensitive and rather shy man would never have dreamt of dealing out harsh words in discussions with fellow colleagues. Anyone privileged enough to study under him from 1963-85 at the RWTH Aachen was obliged to divine his ideas and to learn from him more through the medium of drawing rather than in verbal communication. He was not a man of many words, not one for lectures, symposiums, theoretical discussions.

Böhm came from a family of architects in Offenbach. In 1926, his family moved to Cologne, the city that would become Gottfried’s true home. His father Dominikus Böhm, a renowned architect who specialized in designing churches, exerted a strong influence on him. Today, it is from the latter’s house built in 1931 that the Böhm office, now in its third generation, operates. As a specialist for religious architecture Gottfried initially trod in his father’s footsteps but later outshone him in terms of both stature and importance. Architects Gottfried Böhm admired include Heinrich Tessenow but also Ludwig Mies van der Rohe. Indeed, very disparate models informed his work, which can essentially be divided into phases lasting about ten years. While during the 1950s his style was cool and rationalist as was deemed necessary in the barren reconstruction period, in the 1960s he enters his sculptural phase. One of his major works is the Bensberg City Hall (1967) built on the ruins of the medieval castle in an “ingenious” style. He designed churches above all as expressive sculptures, first and foremost the colossal concrete structure that is the Pilgrimage Church in Neviges. Nobody was as capable as he was of capturing the enigmatic mystery of belief in space and light, in architecture.

In the 1970s, his public commissions were complemented by commercial projects and he embraced Dutch-style technicist and structuralist trends working with steel frames and modular spatial compositions. One example of this can be seen in the Pilgrimage Church in Wigratzbad with its honeycomb structure of hexagonal, steel pavilions. Or the magnificent “Bergischer Löwe” City Hall in Bergisch-Gladbach (1980) with its starkly tectonic but modular structured, deep claret-red facade. During the heyday of postmodernism in the 1980s he connected these structures again with historicist echoes and sometimes decorated them with his own painterly and sculptural works. After all, in Munich he had studied sculpture alongside architecture. It was also during this later period that he designed the Züblin Headquarters in Stuttgart-Möhringen (1984), an administration building comprising two wings of reinforced prefabricated concrete dyed pink and with an enormous glazed structure as was becoming popular at the time. Back then he was also busy masterminding the conversion of the Large Hall of the Württemberg State Theater for which he developed a new stage portal that was to be more a spatial structure suitable for dramatic productions than a portal. The round tempietto of its interval pavilion is only known to opera-goers because it is concealed in the courtyard of the Large Hall.

Böhm was able to heighten things emotionally in a way that would have been kitsch if someone else had attempted it. Consequently, he even considered a kind of romantic castle to be acceptable in a historical context, for example, for the Maritim Hotel in Cologne. And it must be said that despite modern rationality and contemporary designs he nonetheless achieved a powerful design in his projects that led to many of his buildings gaining landmark status. One of his late works, the Hans-Otto-Theater realized in 2006 in Potsdam, a spectacular building located on the banks of the Havel River boasts an eye-catching fiery red roof shell vaguely reminiscent of the Sydney Opera House or an orchid; it has long since become a landmark for the agile regional capital.

Around the same time, he built a municipal library next to the Ulm City Hall. Not everyone would come up with the idea of installing a glass pyramid in the middle of the Old Town. It was important to Böhm that the building can be looked into and appears inviting so that local citizens feel encouraged to enter. Today, the significant structure that initially the one or other local found rather alien is one of the city’s three or four modern landmarks. Böhm showed himself to be especially sensitive when it was a matter of converting or making additions to buildings. With his conversions of the Godesburg near Bonn, the Kautzenburg or the City Hall implanted in the medieval ruins in Bensberg he realized truly ingenious blends of old and new that are obligatory inclusions in every book on how to handle historical buildings.

Gottfried Böhm is one of those architects who can be least criticized for the demise of Modernism and the emergence of an economic functionalism lacking in imagination in the 1960s and 1970s. He could be rationalist when he had to be but he had to also realize monumental buildings without them being boring because there is always something to see in his expressive works. For him architecture was always an art.

One strange thing he would experience in his long life as an architect was that his own buildings were torn down again, examples being the childcare center in Cologne’s Riehl district or the Zentrum für Technologie in Düsseldorf. Some are in danger of being pulled down now as is currently the City Hall in Bocholt (1970). However, it is more often the case that buildings he designed are placed under preservation orders, more than for any other contemporary architect.

In his 100th year Gottfried Böhm still spent time in the office every day, and would often sketch something in charcoal. Indeed, his significant charcoal drawings are legendary and many have been exhibited. On June 9, 2021 he died at the age of 101 in his chosen hometown of Cologne. 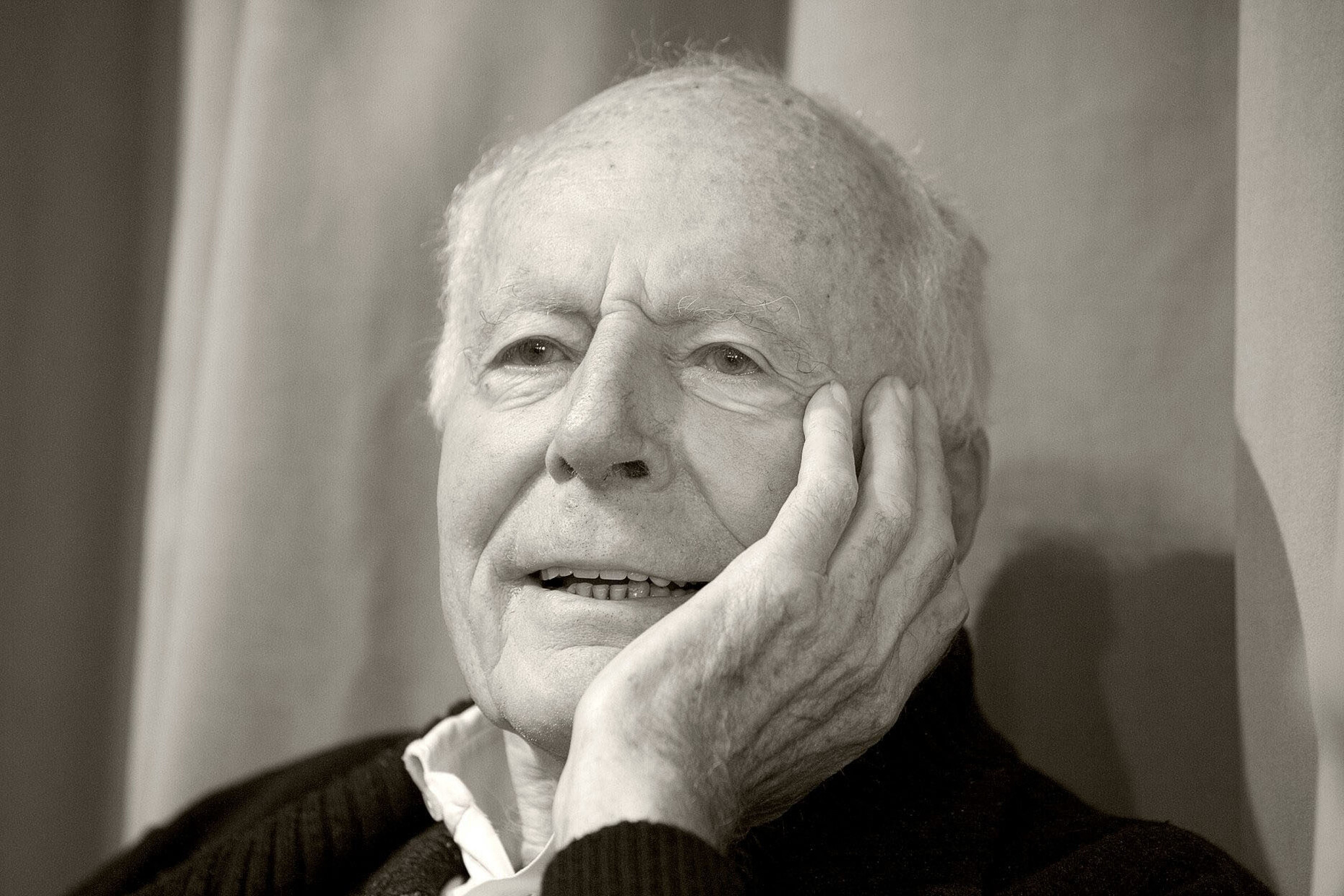 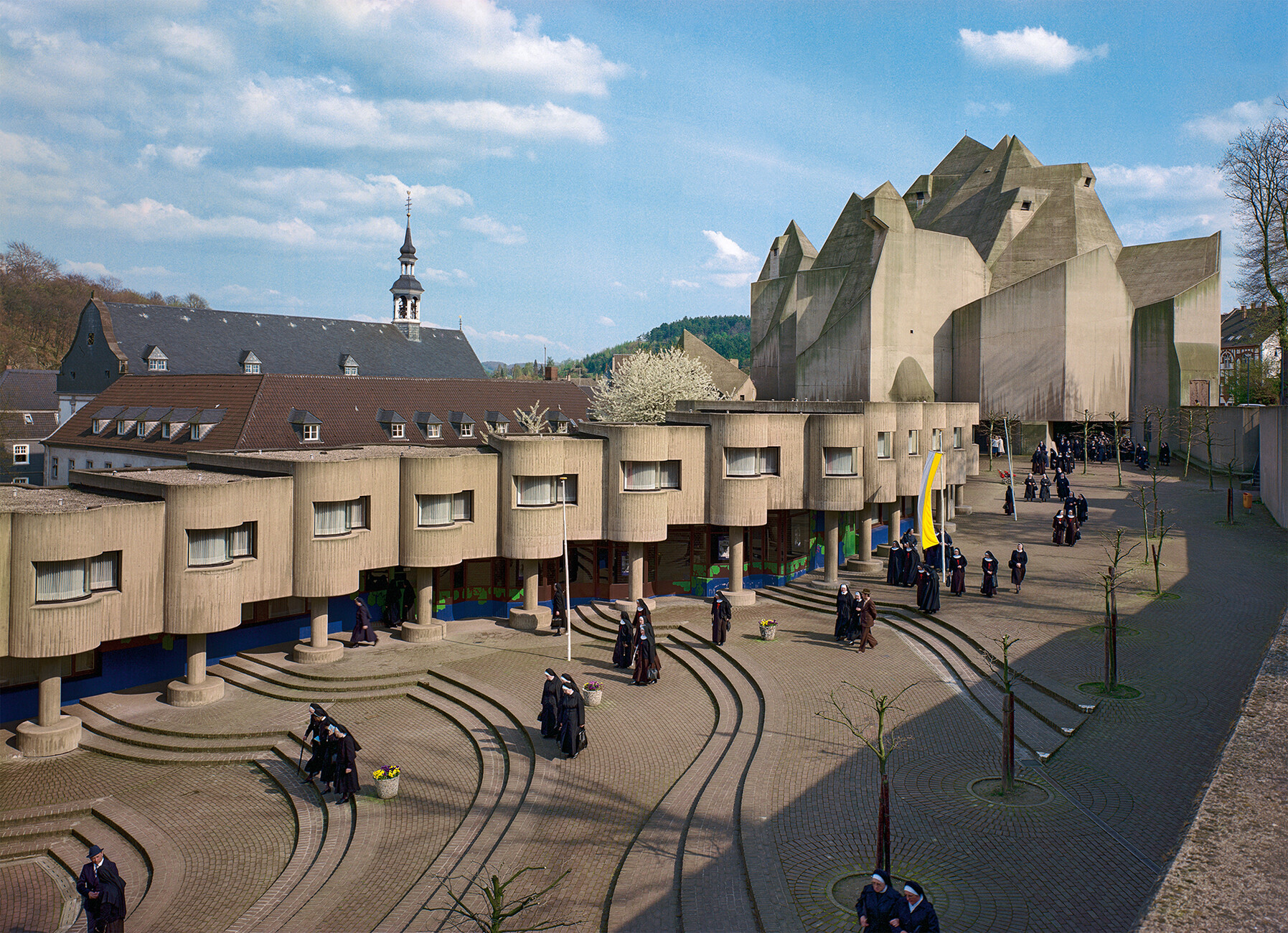 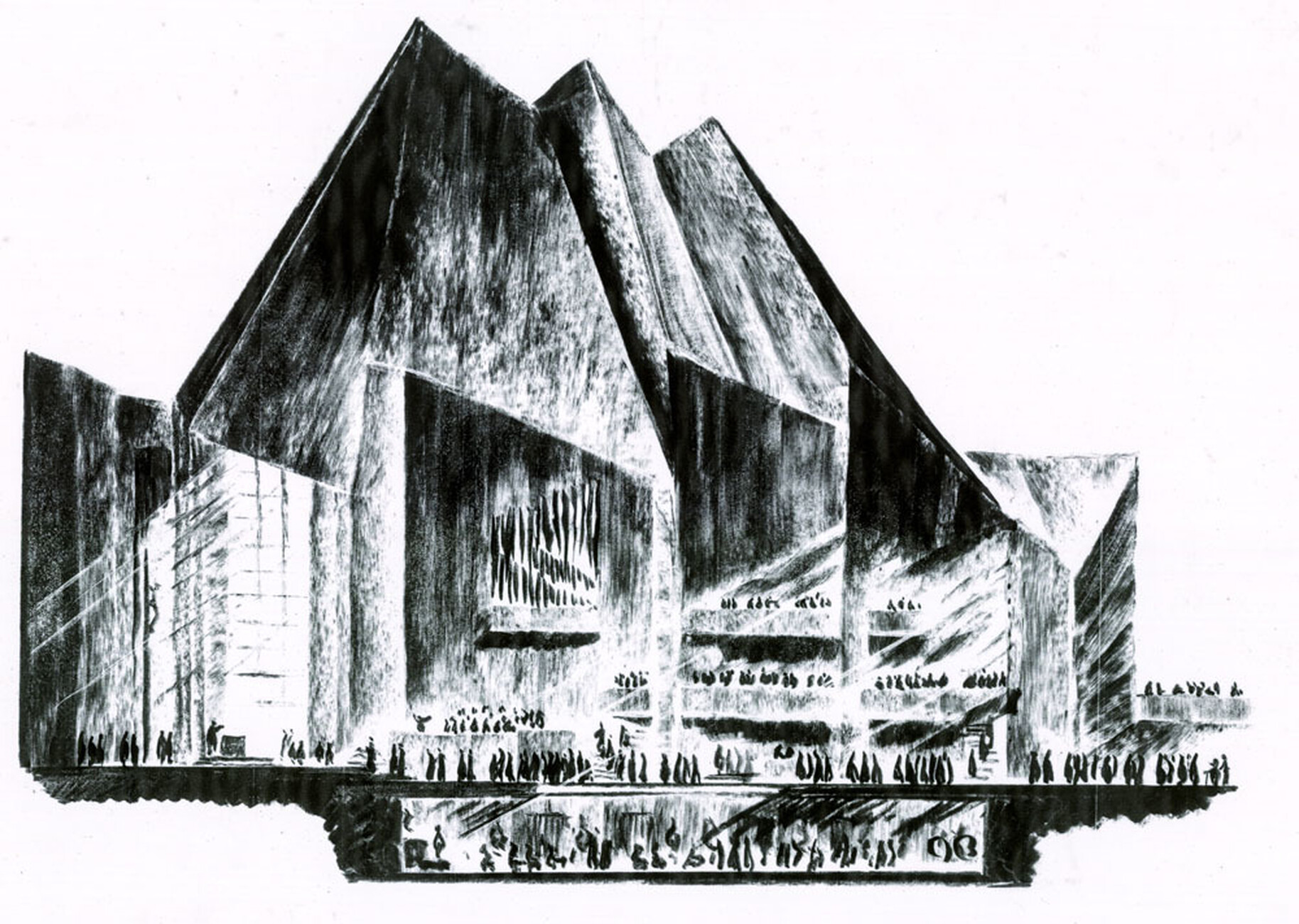 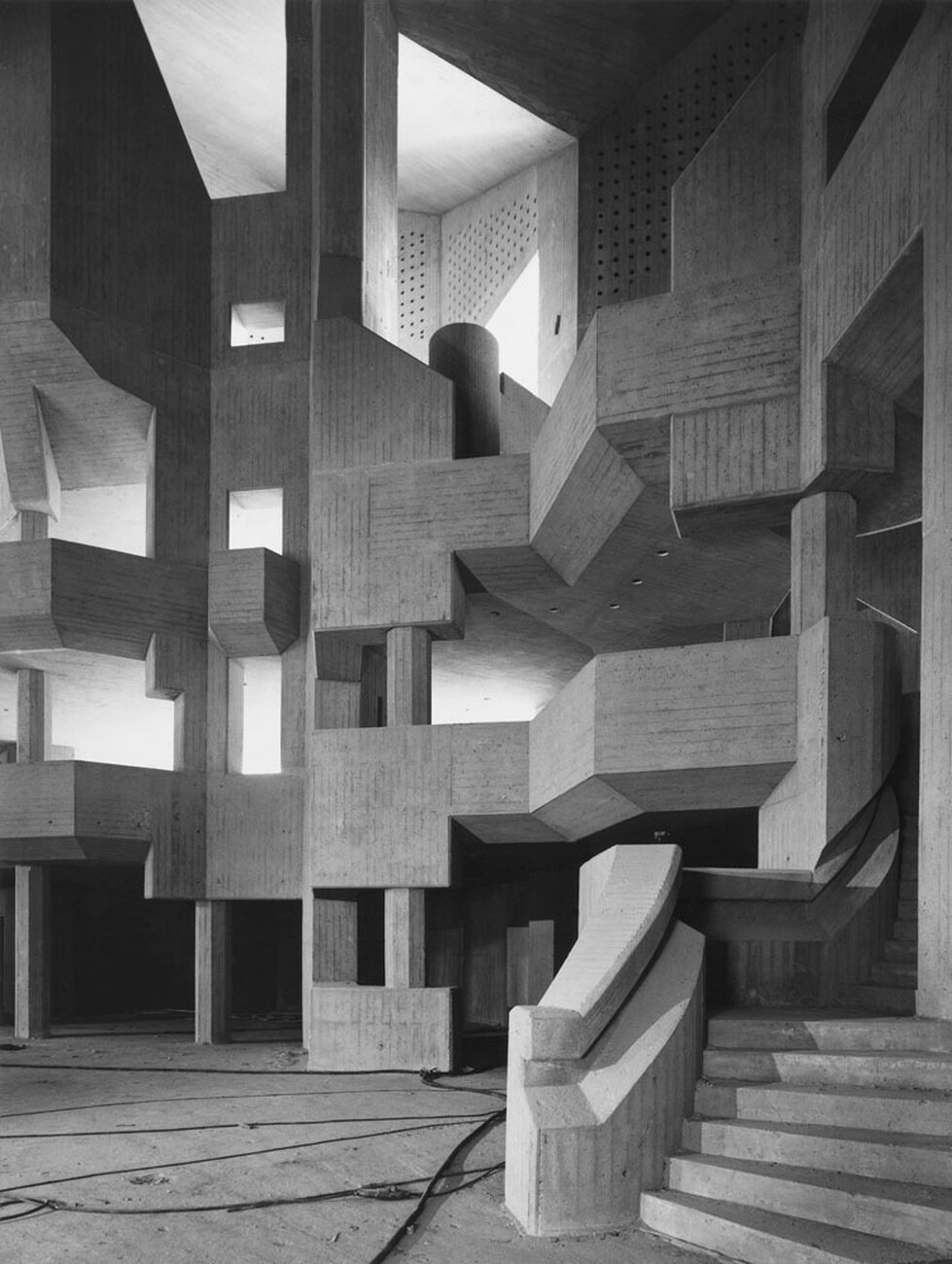 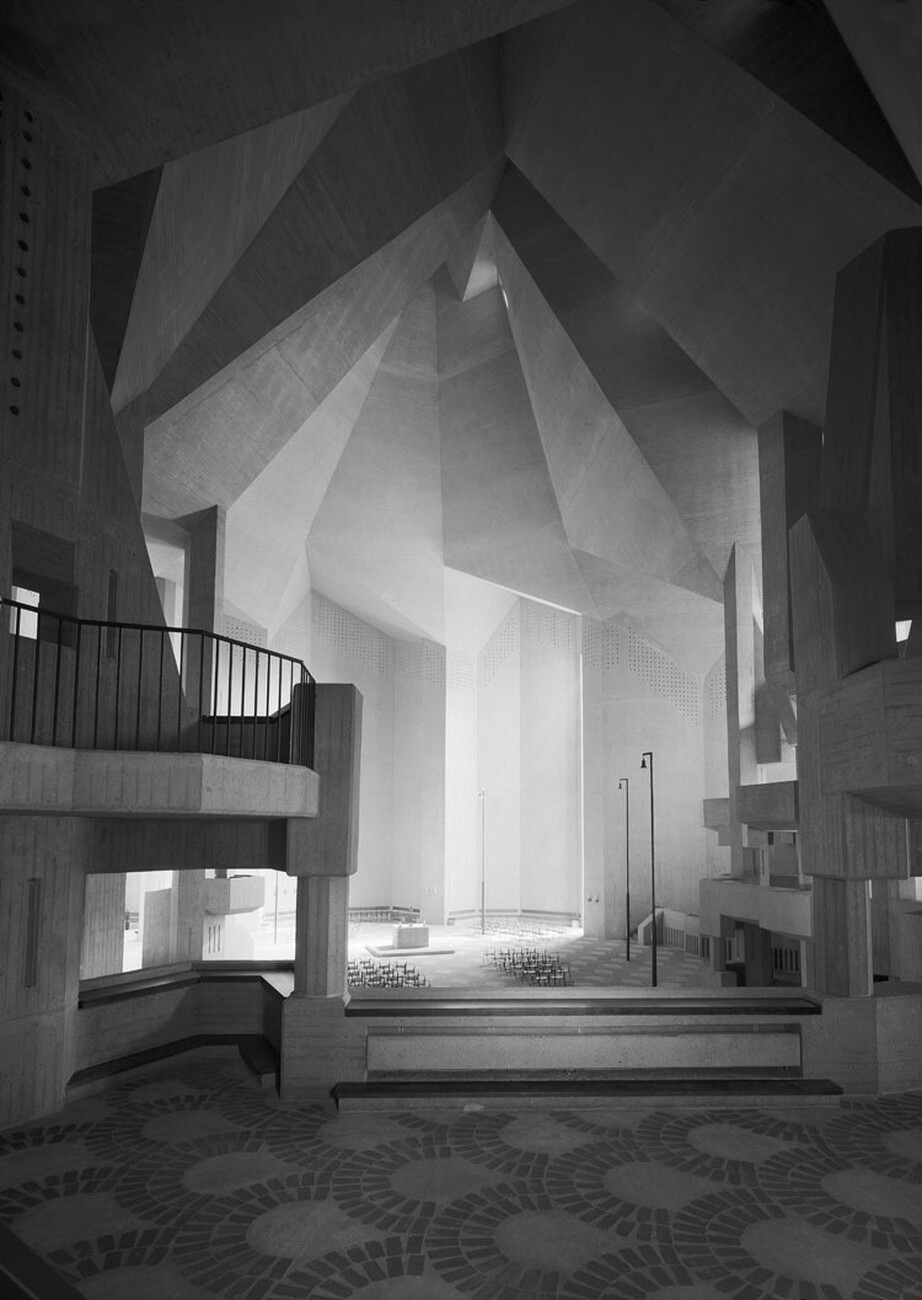 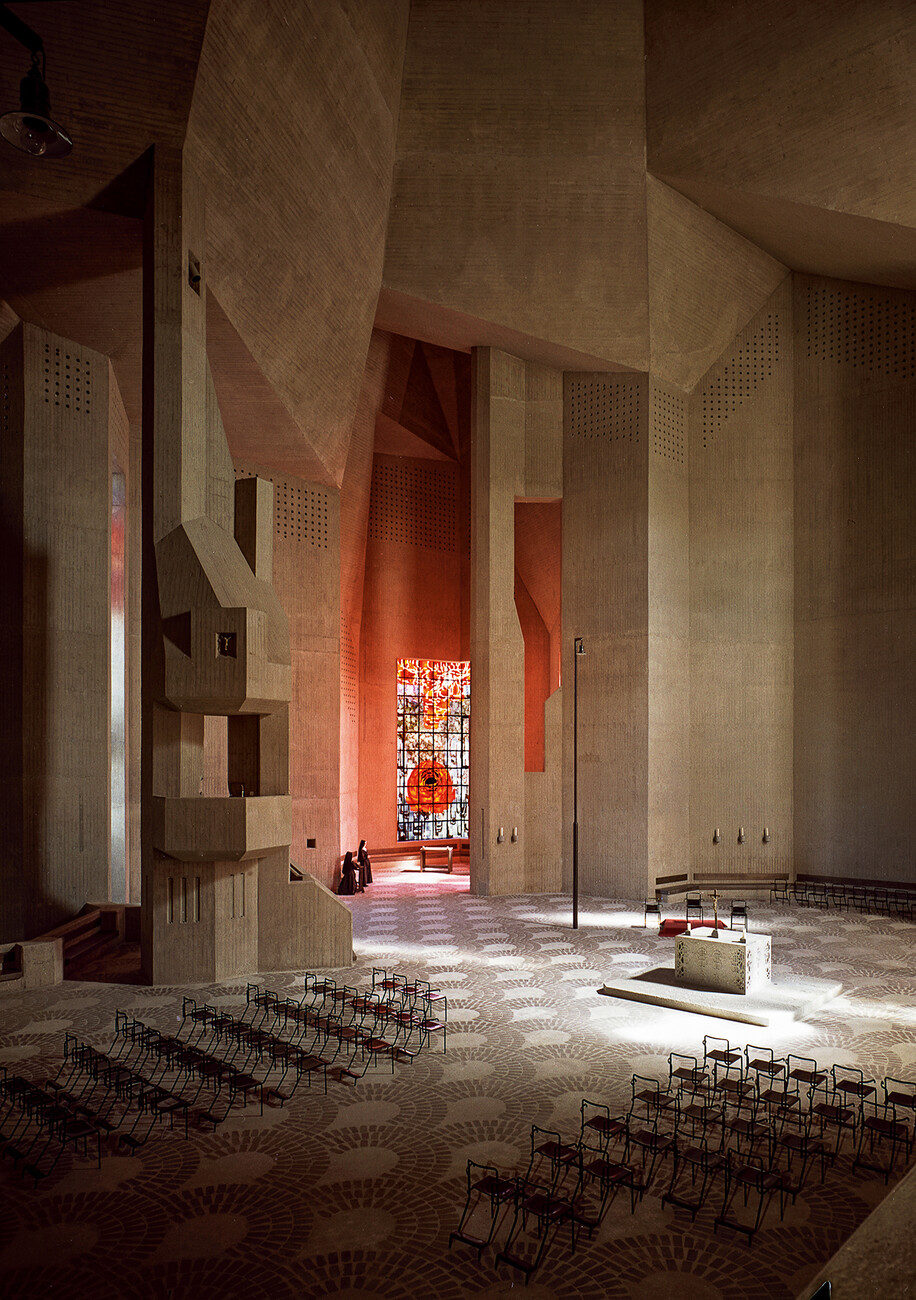 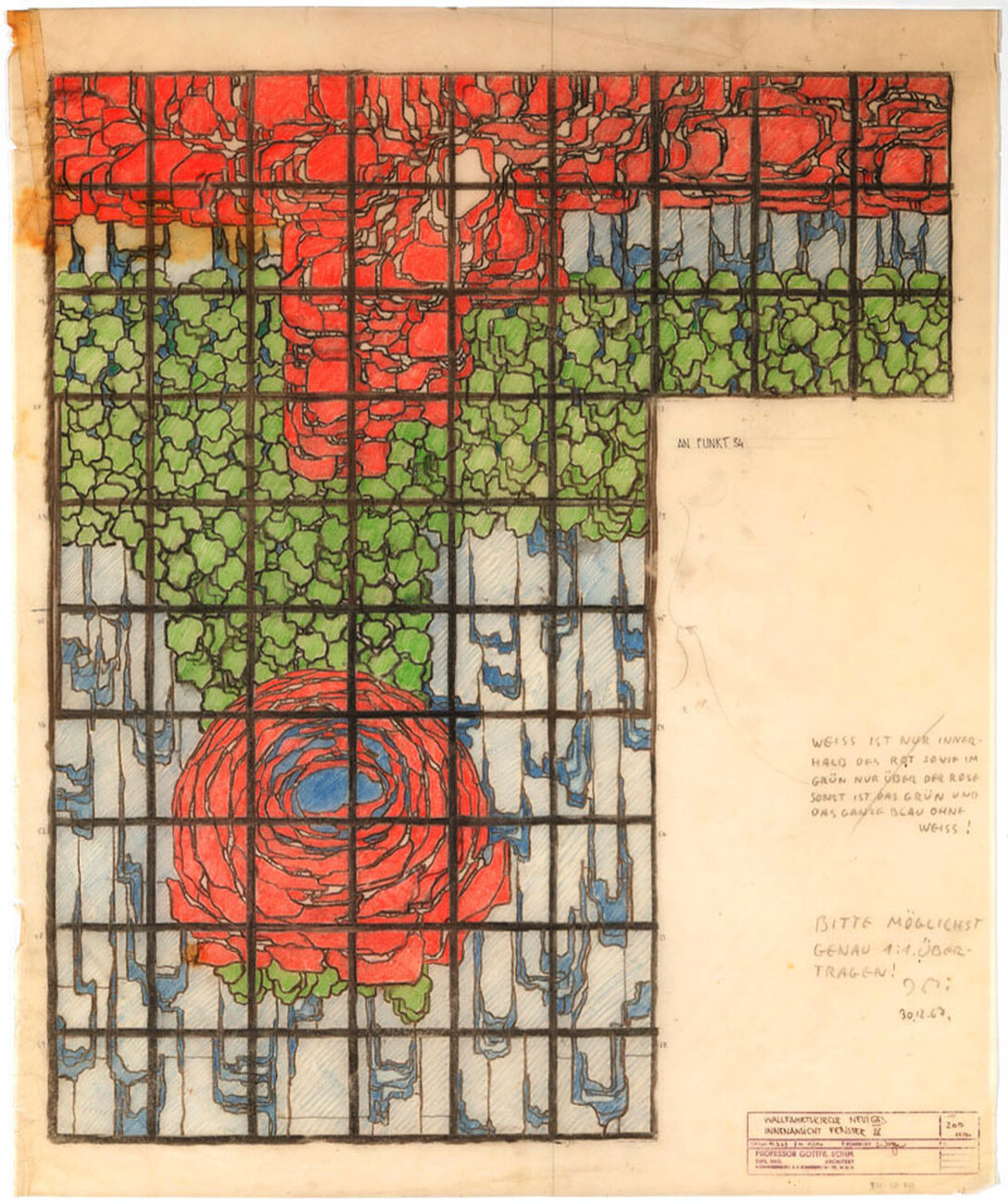 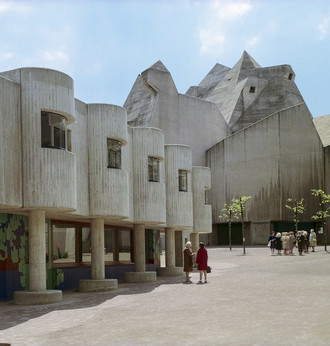 To mark his 100th birthday, Deutsches Architekturmuseum (DAM) in Frankfurt/Main is dedicating an exhibition to the great architect Gottfried Böhm – focusing on just one building from his oeuvre: the famous pilgrimage church in Neviges. Why? A conversation with the exhibition curators, Miriam Kremser and Oliver Elser. 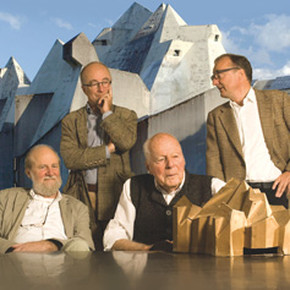 The documentary on the Böhm family is a masterpiece on the psychology of a family in which more or less everything revolves around architecture. 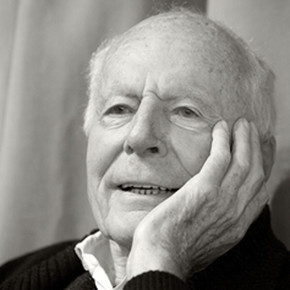 Gottfried Böhm’s oeuvre is immense and even with 95 work still has a firm hold on him. We congratulate the first German Pritzker Prize winner to his birthday and take you on a journey in time through five of his buildings in Cologne. 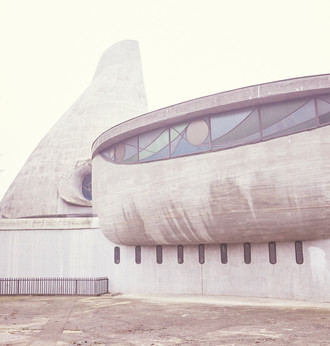