pool Architekten have configured the school building “Vinci” in Suhr in the canton of Aargau around a breathtaking staircase.
by Fabian Peters | 7/18/2018

Suhr is a municipality of around 10,000 inhabitants in the Swiss canton of Aargau. Unlike neighboring Aarau, the capital of the canton, with its medieval center, Suhr only grew beyond village size last century. There is no real center. Large public and private edifices stand alongside the remaining village buildings, lending the place a thoroughly heterogeneous look. In 2014 Zurich-based pool Architekten won the competition for a new elementary school in Suhr. The building plot is located between an existing school complex and the busy main road leading to Aarau. The architects designed a four-story cube on an almost square site. By condensing the layout into a compact volume, they were able to clearly set the building back on the site, away from the main road, creating space for a small public area of greenery as a buffer zone.

At first glance the footprint of the school appears simple: The rooms are configured around the four outer sides and are accessed from a central square atrium with a large skylight, at the center of which is a circular staircase. The building’s loadbearing structure consists of prefabricated concrete piles, which are integrated in the four outer façades and also surround the atrium. The showpiece of the building is the central staircase, with four sets of steps connecting each of the stories with one another. With this feature the architects wished to cite the famous double-spiral staircase at Château de Chambord in the Loire Valley, whose design is attributed to Leonardo da Vinci. As such, “Vinci” is the name of the new school. Leonardo’s drawings contain various designs for staircases with multiple spirals; here the architects have opted for one of the most complex. Indeed, in Chambord only two sets of steps lead from one story to the next, while here there are four. In Suhr the specialists at pool Architekten designed two of the stairs to be closed on all sides; consequently two winding bands of concrete run from the ground floor to just below the skylight. They assume a particularly sculptural appearance thanks to the open flights of stairs above and below them. Yet here the architecture is not purely an end in itself. The atrium and stairwell provide a fascinating place for students and teachers to spend time.

The concrete piles arranged in colossal order give rise to a monumental impression when viewing the exterior of the building. Together with the overall cubic design and slightly overhanging roof, it calls to mind the Alte Kantonsschule in Zurich, one of the best-known school buildings in Switzerland, built from 1839-1842 by Gustav Albert Wegmann. This reference to an explicitly urban architectural form is a clear statement by pool that with its design it seeks to rule out any pseudo-rustic village homeliness. 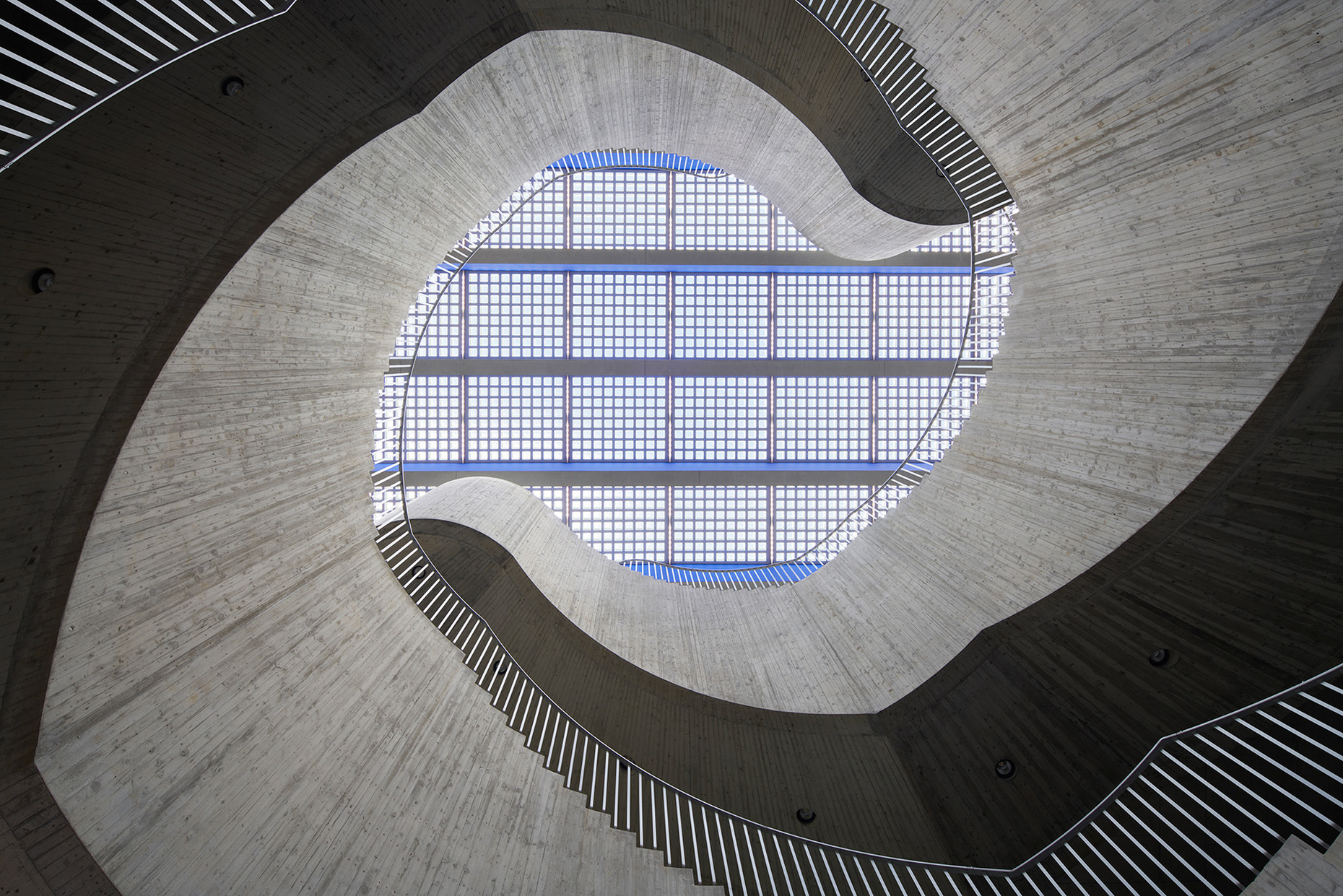 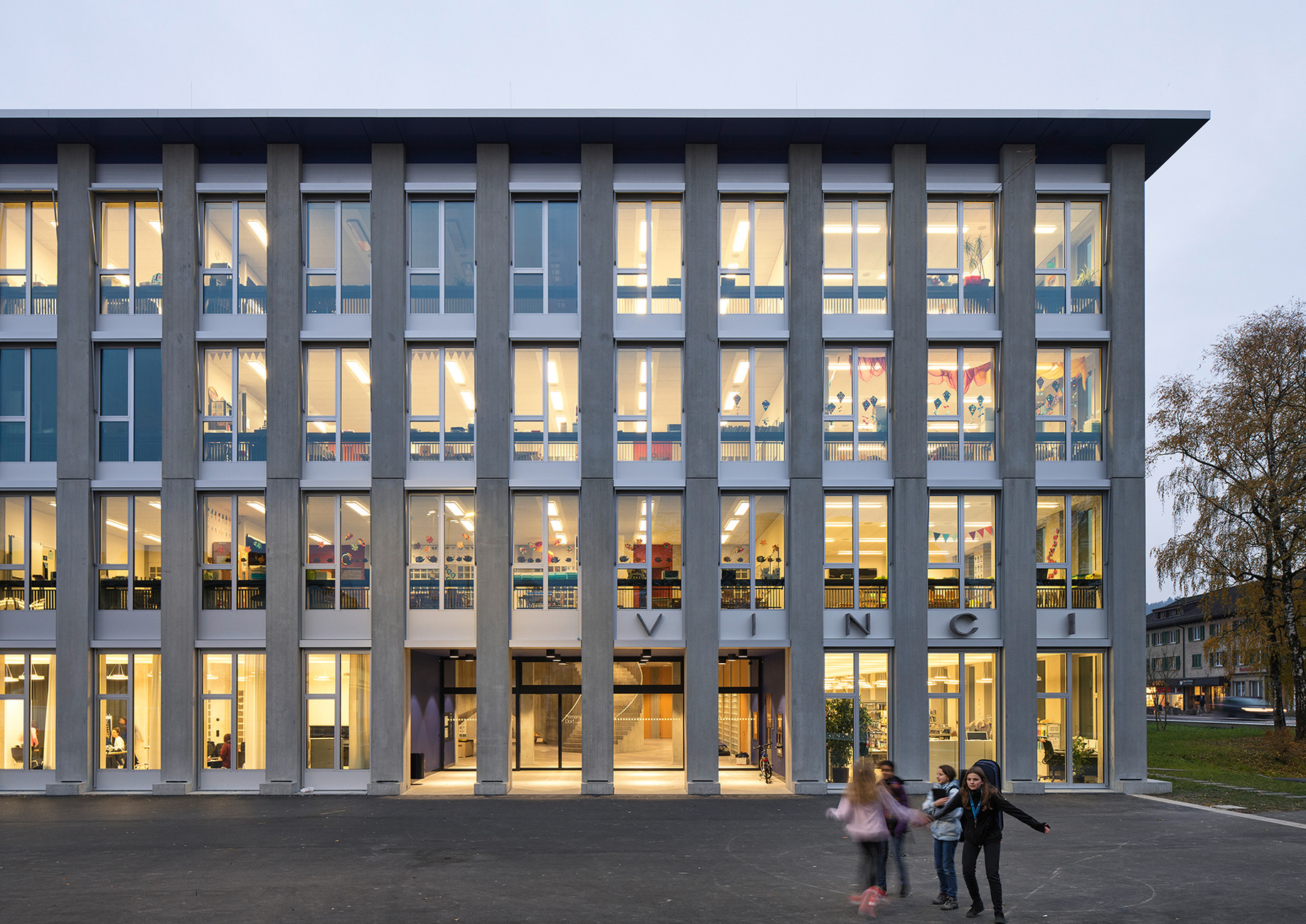 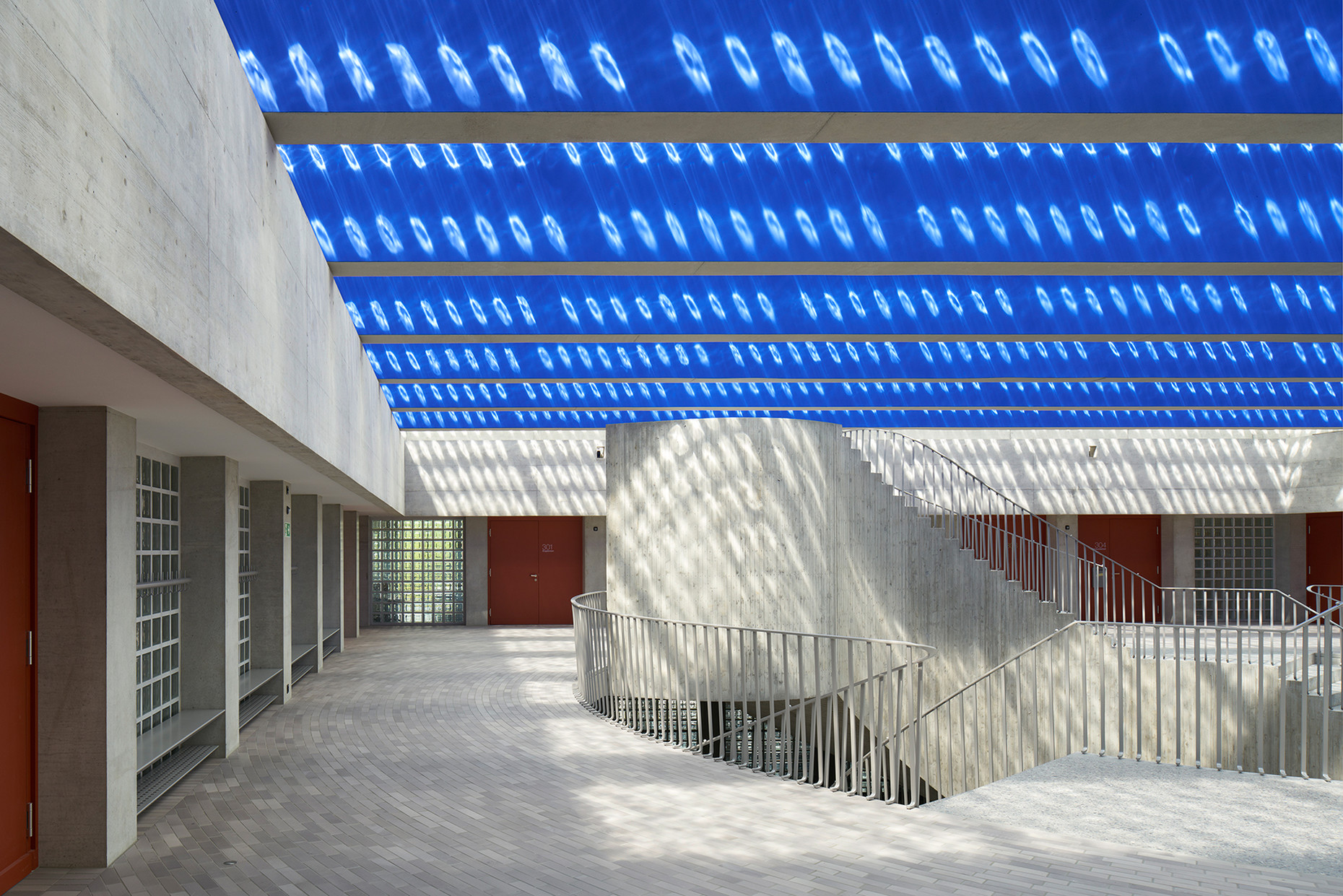 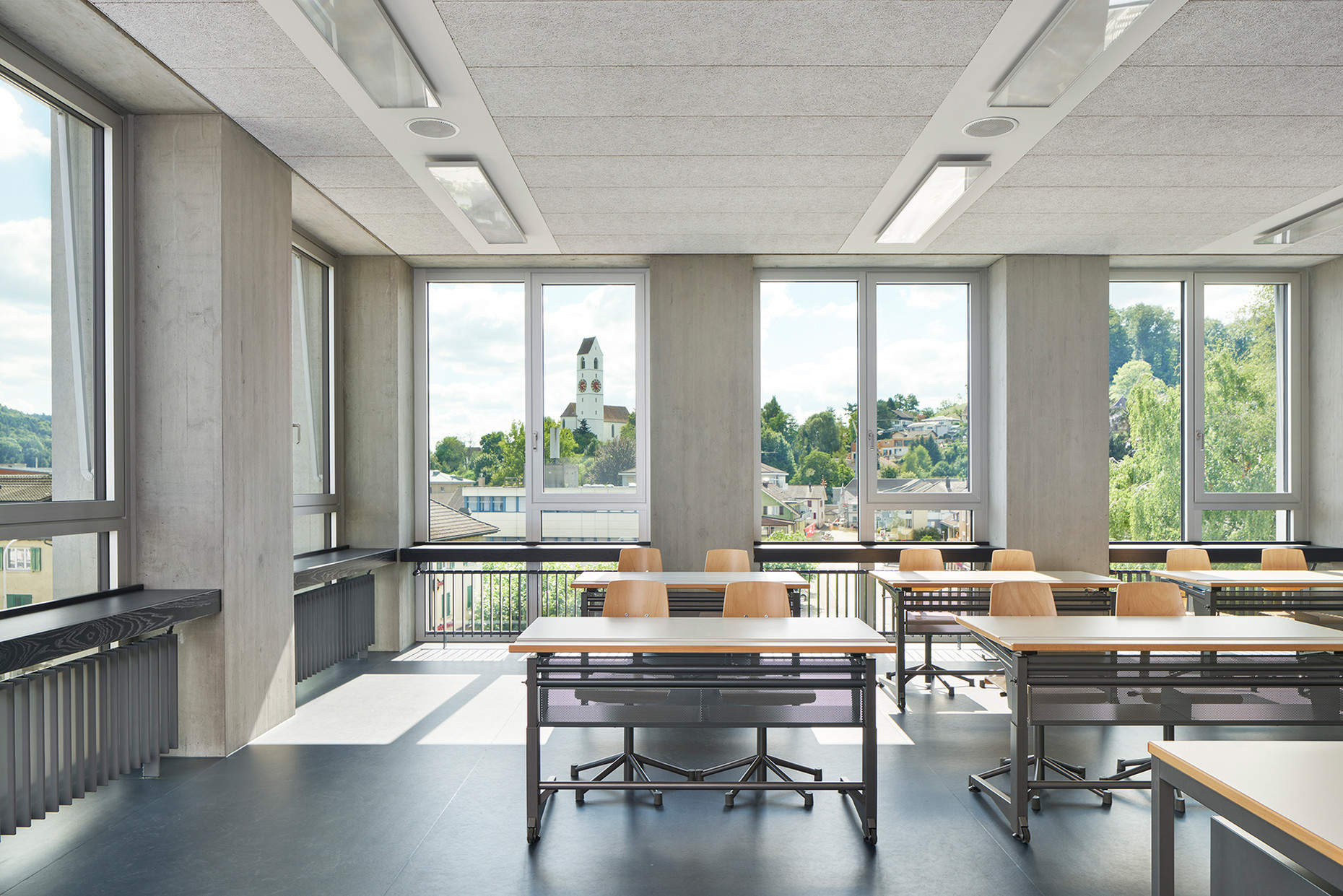 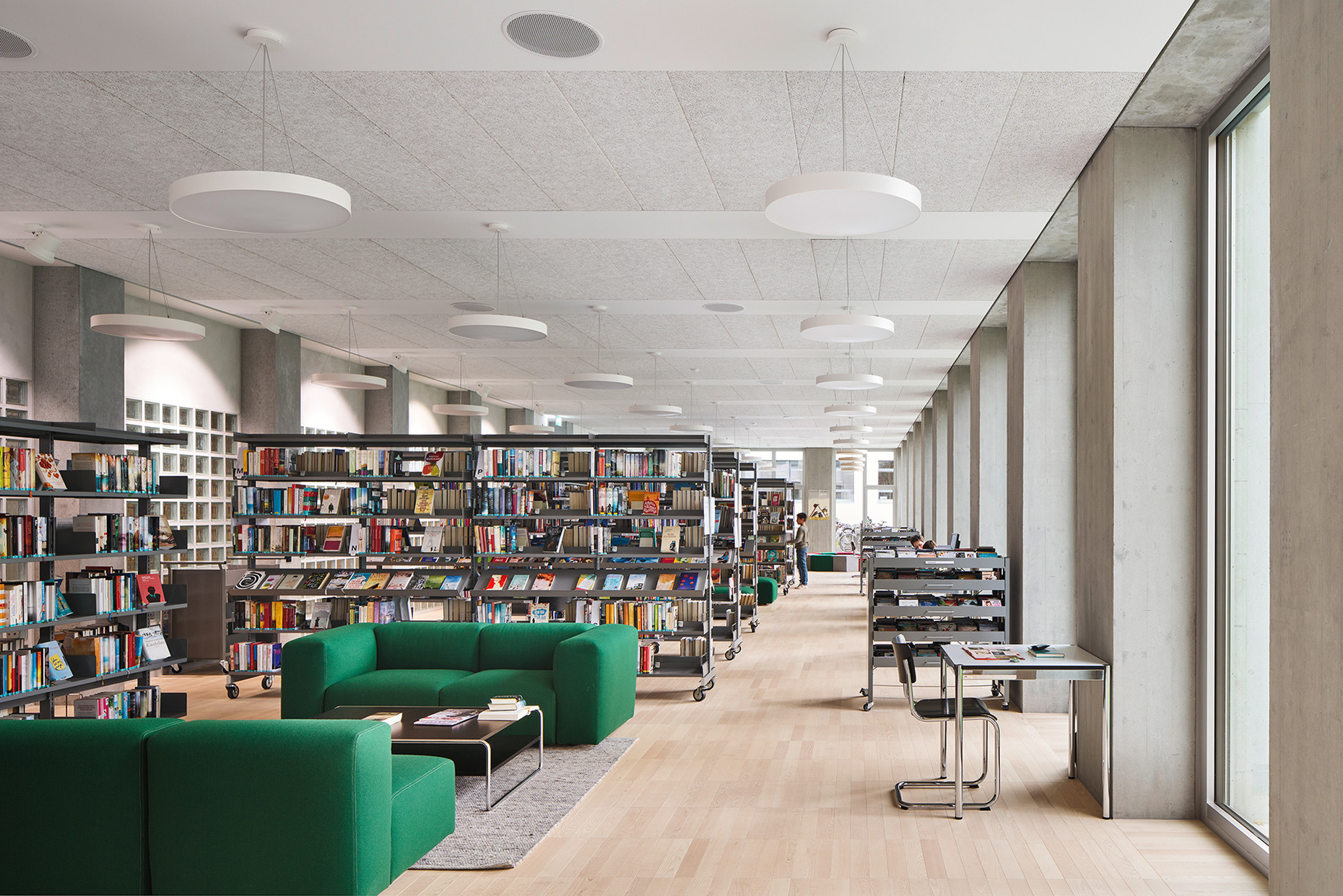 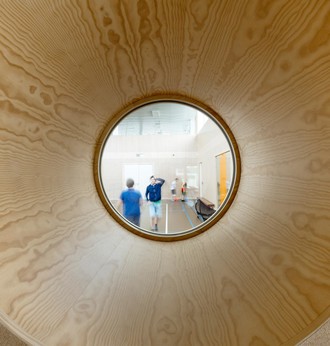 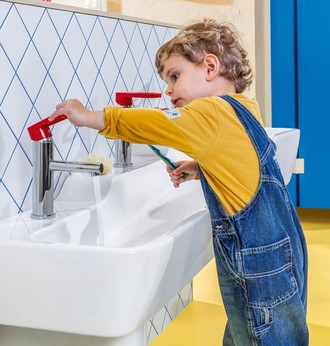 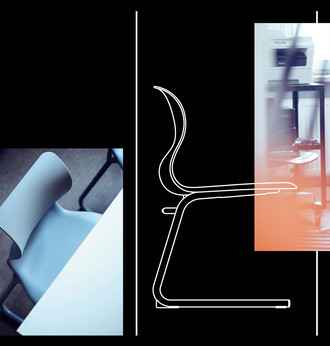 Time to get moving!

In the form of “Pro,” Konstantin Grcic created a universal chair that has been getting sitting moving for a good five years. Exclusively on Stylepark, Flötotto shows in a digital trade fair booth at the Salone del Mobile 2017 the whole variety of this amazing chair family.