Will we still work at desks in future? That was one of the many questions asked at Orgatec 2018 in Cologne. We review the trade fair.
by Fabian Peters | 11/1/2018

What impressions of the present and future of work defined Orgatec, probably the world’s most important trade fair for office furniture and equipment, in the year 2018? To get an answer to this question, it’s worth taking a look at two of the most successful stands in Cologne – those of Gumpo and Thonet. For Bavarian manufacturer Gumpo, RelvãoKellermann not only revised the product range and the corporate design, but also designed an exhibition stand that offers the perfect framework for the new products. The trick to this radiantly white, graphically conceived architecture was the lighting. Draped in thin covers, powerful photographic lamps created a very soft, pleasant and glare-free light. Yet the stand is worthy of note for another reason, too, namely the glaring absence of all the cocooning sofas and lounge chairs without which virtually no other office furniture supplier – let alone one known for its design – would dream of appearing today. Instead, there were desks, conference tables, lecterns and dividing walls, not to mention a stand architecture more reminiscent of individual offices than open-plan office landscapes.

An alternative was presented at the Thonet stand, whose design was placed in the hands of design studio Ply. Kept entirely in metallic silver with floors made of galvanized sheet steel, it offered a successful interpretation of industrial chic, without descending into kitsch industrial romanticism. The area was subdivided by semi-transparent curtains made of wire mesh, which reinforced rather than disrupted the stand’s impression of openness. The overall presentation evoked associations of a loft-like, open-plan office of the kind that the media seem to present as the ideal scenario for a creative working environment these days. “Offices are the new coffee shops,” read the slogan applied in large letters on the wall of the Thonet stand. In other words: The combination of working and relaxing, observation and concentration that is all part of the myth of the Viennese coffee house can now be found in the office. Here, people gather informally, with no sense of hierarchy, to exchange ideas or to work alone.

The idea of informal working is certainly nothing entirely new at Orgatec. Nevertheless, it was presented especially pointedly this year. If you had to state the central idea of this trade fair, then undoubtedly it would be the question of the future of the office as we know it, which is now being asked on many different sides. Most strikingly, the trade fair’s biggest exhibitor, Vitra, addressed the forms work will take in the future. With “Soft Work,” a sofa by Edward Barber and Jay Osgerby, Vitra presented a sofa system that was developed by the designers especially for informal working. Posture, seat height, the opportunity to integrate plug sockets and tables – all this is supposed to make it possible to work comfortably in places like hotel lobbies, airports or work lounges, instead of dashing off e-mails “on the hoof.” Here, then, the intention is not for the office to become a coffee shop, nor vice versa. According to Barber & Osgerby, “Soft Work” is intended as a full-fledged workplace. Consequently, they believe their furniture has a place in regular offices and are already proposing the “deskless office” and declaring the death of the conventional desk.

Vitra didn’t stop at this one concept of the future of work. At its stand, which was curated by Jonathan Olivares and Pernilla Ohrstedt, Sevil Peach and Konstantin Grcic presented their own ideas on this topic. Grcic’s “super-flexible space” in particular shows an interesting alternative to the sofa landscapes that have long since become representative of the “new office.” His scenario is more like a classroom than a living room. Everything is light; everything is mobile. The inspiration came from a gymnasium, Grcic says, in which the type of sport practiced changes time and again. “Stool-Tool,” his versatile stool, has its place in this concept as much as his new, small and economical swivel chair “Rookie,” which premiered here. In fact, the orientation towards school classrooms is an intriguing idea. Virtually no other environment sees work situations change with such frequency or demands furniture that permits individual work, presentations, small-group projects, and conference and plenary scenarios with no great effort required. The search for the future of the office might therefore begin in the classroom.

The discovery of informal working involves another aspect too, though: Occupational health science has long been aware that long hours spent sitting benefit neither health nor the quality of work. Instead of having workers play with their height-adjustable desks, the designers at Wilkhahn have come up with a better idea: Office workers who regularly get up and walk around have the opportunity to talk and network with colleagues and thus contribute to innovations in the company. For these types of discussions, the company recognizes the need for informal seating and lingering areas – and has therefore collaborated with the designers RSW to develop the “Sitzbock” and the “Landing” wall relief, which are designed precisely for these sorts of brief, chance gatherings.

The very antithesis to these sorts of office solutions can be found in the sprawling “Tama” desk by Eoos for Walter Knoll, a 30,000-euro piece of furniture that flies in the face of any claims that the desk is a thing of the past. In spite of forms reminiscent of Zaha Hadid, “Tama” nevertheless embodies a profoundly conservative idea of the desk, which is less a workstation and more a symbol of power – a status symbol in the owner’s office of a successful company. Precisely how senior management will work in future is far more evident in a design like “Signum,” a desk system that Unifor has developed in cooperation with American design and architecture company Gensler. It offers high-quality production and finish, a wood veneer and a tasteful impression – yet it is actually an add-on desk for space-saving purposes in open-plan offices. It is workstations like these that will in future draw even managerial staff into open-plan office spaces.

In general, the open-plan office now appears to be accepted as having no alternative. Many new products therefore aim to tackle the not insignificant disadvantages of this concept – such as the telephone and meeting booths that were ubiquitous at the fair. The market for acoustic solutions also seems to be booming as before. The same goes for cocooning sofas as places to retreat to, since they are now part of the standard range for almost all upholstered furniture manufacturers. Now Fritz Fritz Hansen has also jumped aboard this train, and with “Plenum” by Jaime Hayon it offers an original alternative to the existing products. Increasingly, shielded individual workstations are also being brought to the market, with a particularly opulent model offered by Poltrona Frau. The “Cove Lounge Chair,” a semicircular design by Foster + Partner, is covered entirely in fine leather.

A true trendsetter has emerged, meanwhile, in the “Kiik” modular upholstered furniture range by Ichiro Iwasaki, which was launched by Arper in the spring. At Orgatec a whole range of manufacturers exhibited similar add-on systems somewhere between upholstered bench and sofa, which can fulfil various tasks in waiting areas, offices, lobbies and lounges. Thanks to their height, like Vitra’s “Soft Work” by Barber & Osgerby, they are also suitable for working. A particularly versatile system in this regard was presented by Wilkhahn with “Insit” by Wolfgang Mezger.

After the trend towards homely offices caused a large number of classic home furniture manufacturers to penetrate the office segment in recent years, this year numerous outdoor furniture manufacturers pitched their tents at Orgatec, with Fermob and Gloster being two of them. Clearly the assumption here is that the outdoor area is becoming increasingly important as a potential workspace. We can look forward to seeing which branch of the furniture industry will be the next to discover Orgatec. Some halls are already looking uncannily like those of its sister exhibition, imm cologne. 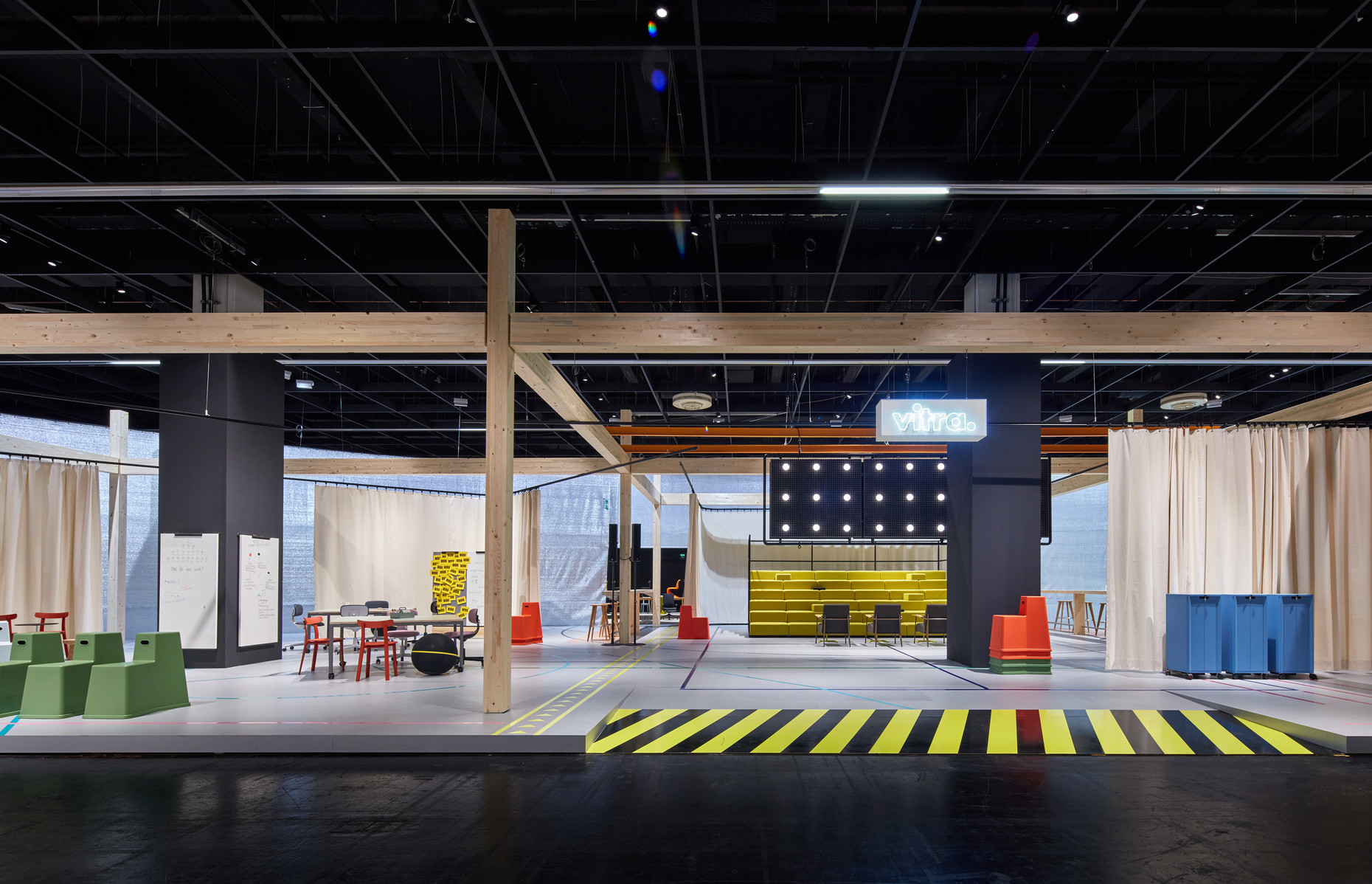 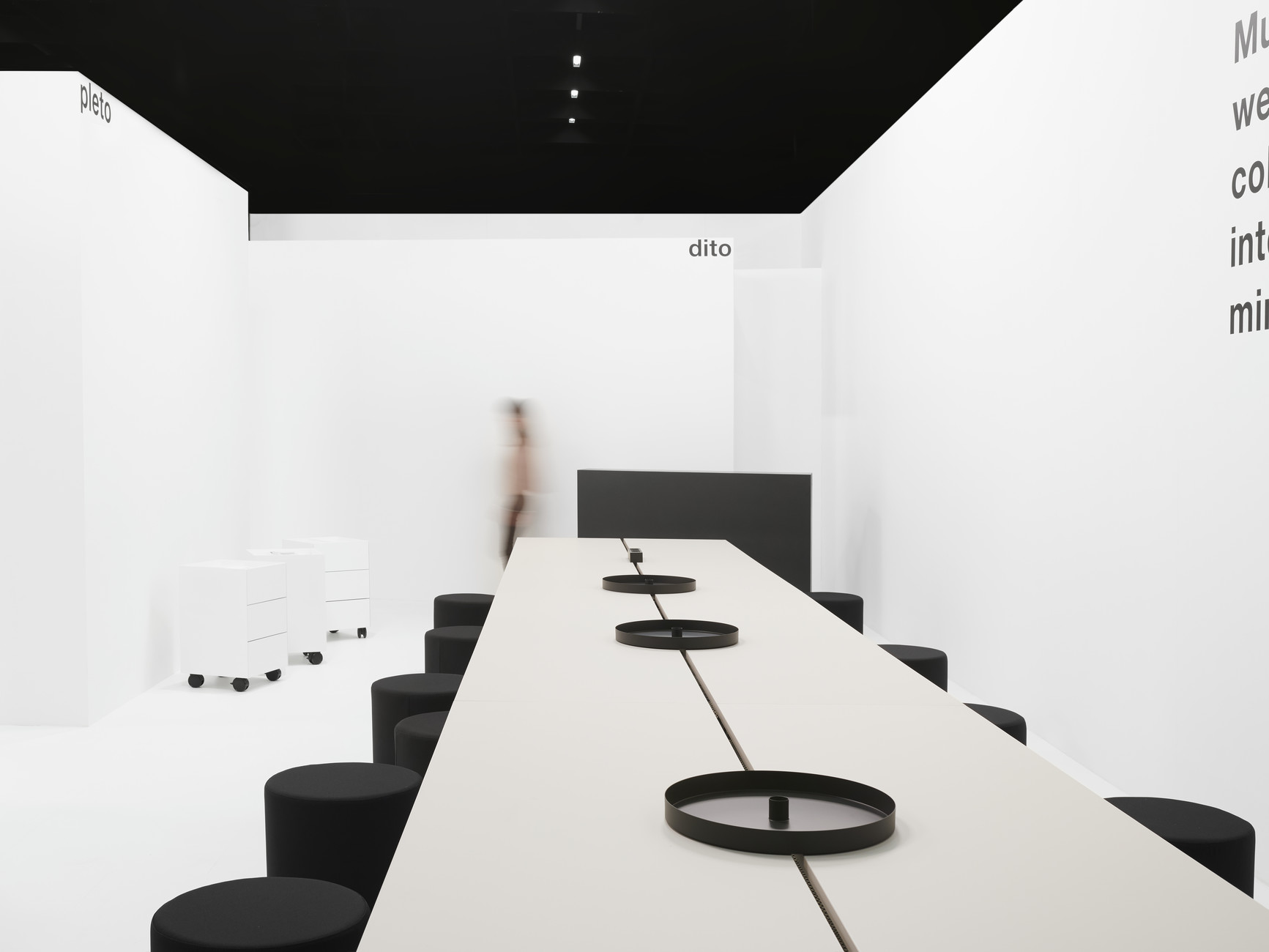 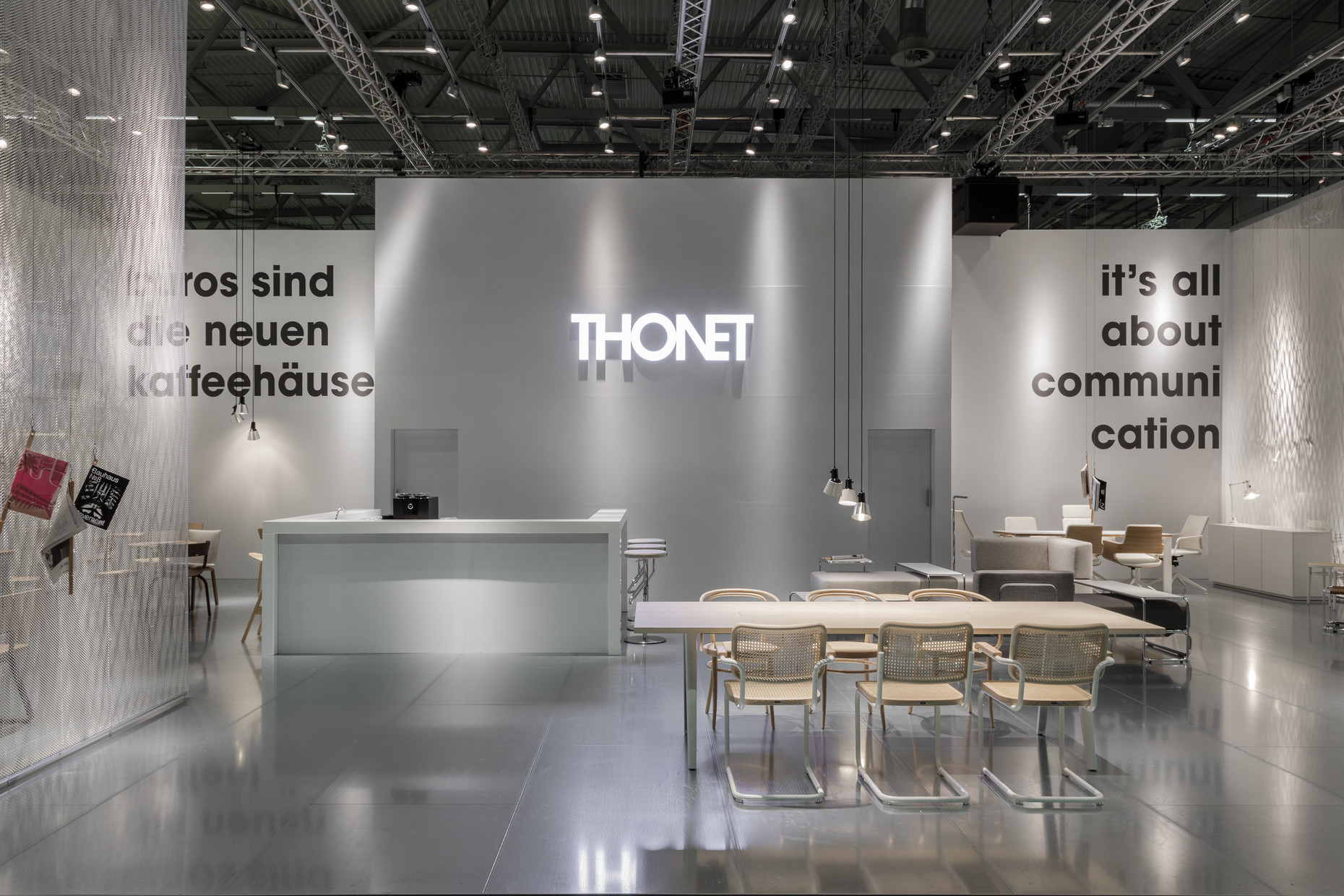 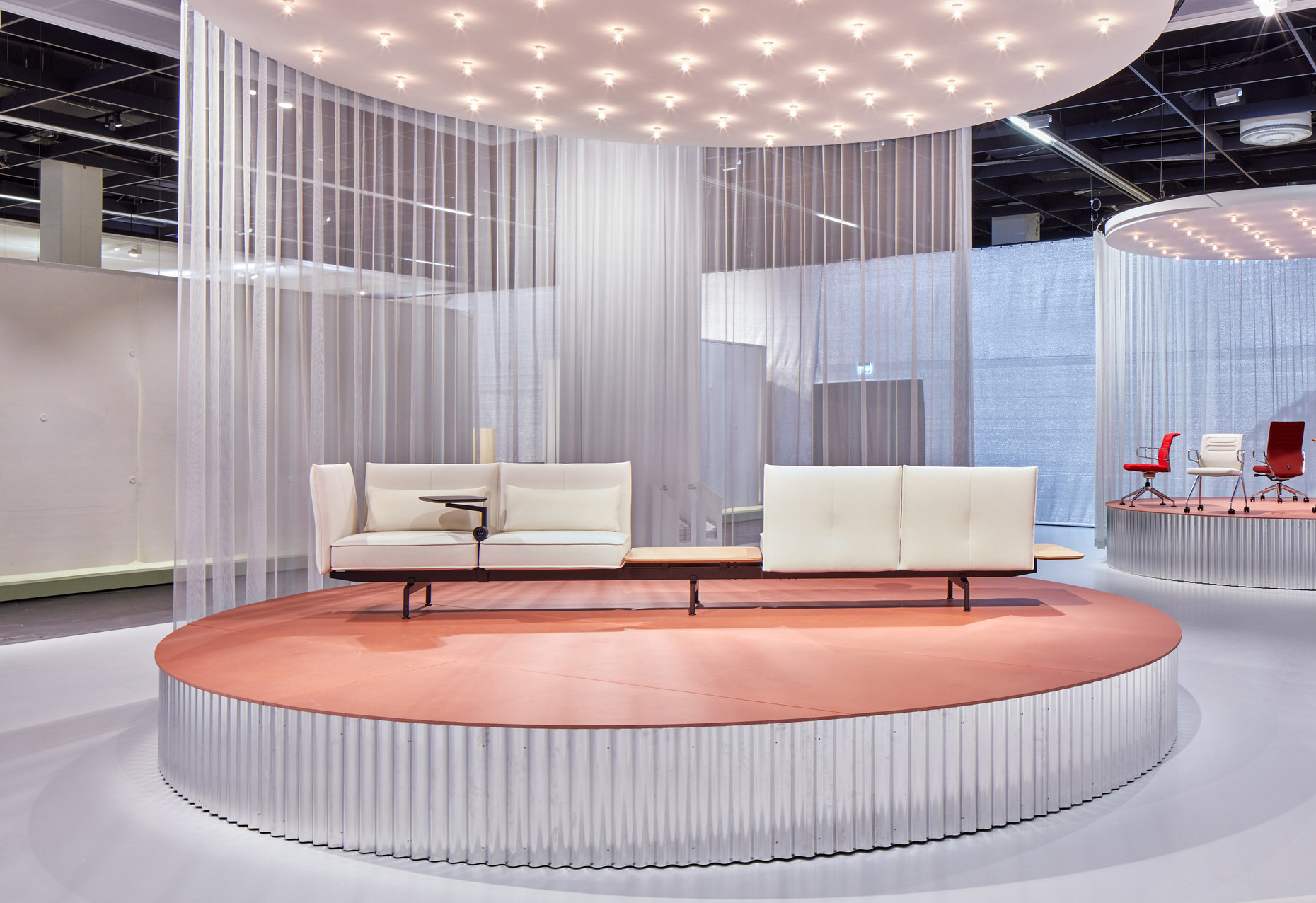 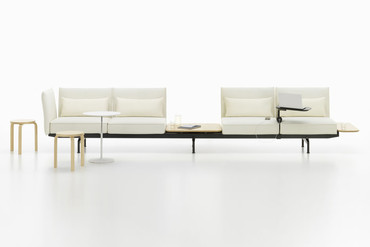 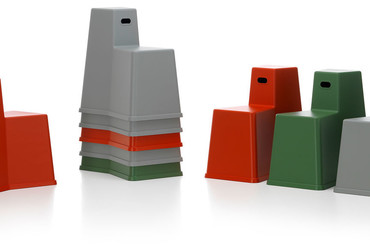 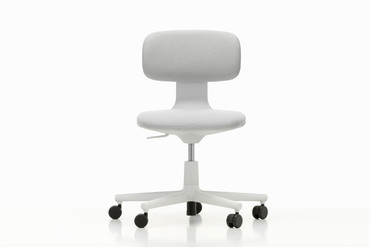 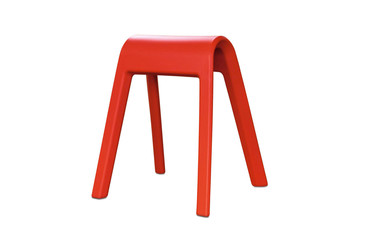 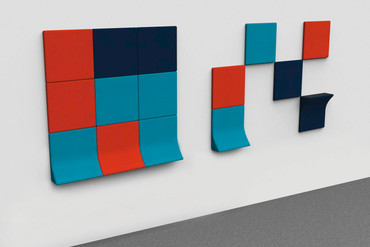 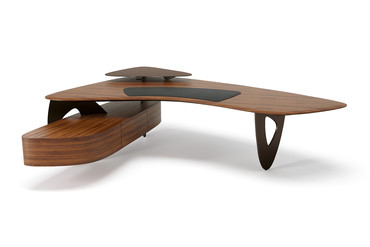 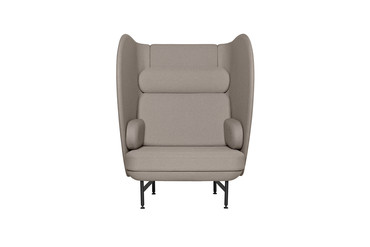 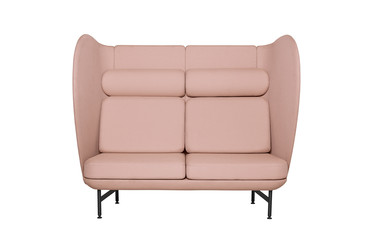 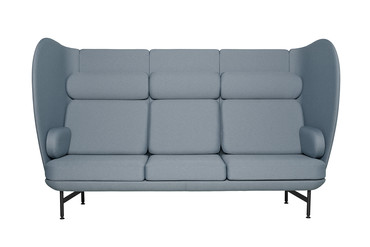 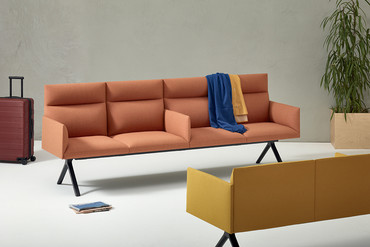 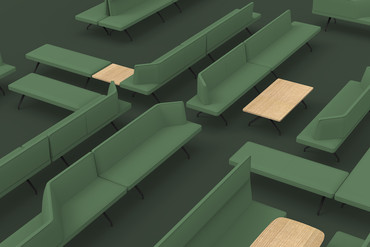 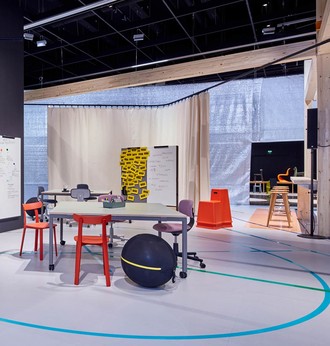 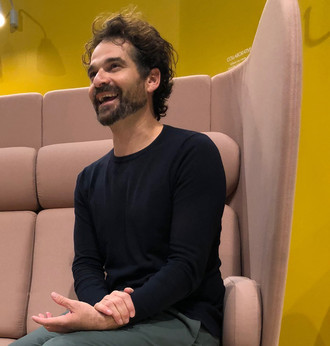 Discussion in the plenum

The new cocooning sofa created by Jaime Hayon for the Danish furniture manufacturer Fritz Hansen is called “Plenum” and was just presented at Orgatec 2018. Fabian Peters spoke to the designer. 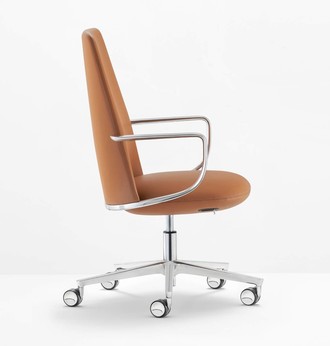 Claudio Bellini has designed an elegant executive chair for Pedrali to be launched at Orgatec 2018. 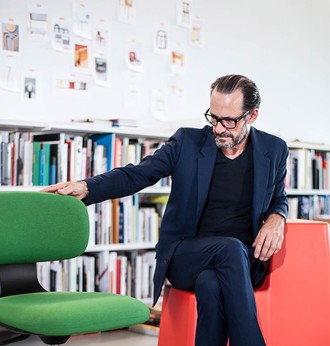