In our series "Spotlight on Women Architects" we regularly present the work of female architects – such as that of Berlin-based Ursulina Schüler-Witte, one of the great protagonists of German Futurism who, together with her husband, enriched the German capital by designing a number of iconic buildings for it.
by David Kasparek | 8/2/2022

There is this lovely old black-and-white photograph of Ursulina Witte. The young architect sports a dark bob and is elegantly dressed. She is wearing a sleeveless dark top with a pale pleated skirt and light summer shoes. There is a dark purse lying on the stool next to her and behind her are rolls of drawing paper. There are architectural drawings hanging on the walls, the casement window is slightly ajar, and the light outside is bright. It is summertime. Witte is sitting leaning forwards making notes. In front of her stands a draughtsman’s table angled at around 45 degrees; there is a large-format plan stretched over it. The young woman appears totally absorbed in her work, entirely lost in thought, focused and is obviously in another world. The picture dates from 1963 and was taken at the architectural practice of Bernhard Hermkes, for whom Witte had been working since 1961. Prior to this, she had successfully graduated in Architecture degree from TU Berlin in 1960 – a course of studies she had embarked on in 1953, one also taken by Hermkes. While still a student, she met the man who was later to become her husband and work partner – Ralf Schüler. A fellow native of Berlin, he too started working for Hermkes as of 1967. A qualified electrician, he however broke off his studies after hiring on with Hermkes, considering himself fully trained after working in the practice. This was the time when the projects the couple were working on included the design for the Architecture faculty building at TU Berlin (1961–1963), named after their boss at the time and located on Ernst Reuter Platz, with Schüler even engaged as site manager.

Nevertheless, the architect and her companion repeatedly incurred the wrath of their boss, for instance when she called him up to ask for a three-day extension to their annual leave. Ursulina and Ralf required a little more time to finish the drawings for their entry for the competition "to extend the Berlin exhibition center and to build a new congress hall with a capacity of 4,500". In a book brought out by Lukas-Verlag in 2015, Schüler-Witte, the name she went by after her marriage to Ralf in 1967, reports that Hermkes then slammed the phone back down on the hook angrily. In those days, telephones consisted of a receiver and a hook rest and people didn’t get married until their financials circumstances allowed for it. And although the above-mentioned competition did not pave the way for them to become freelancers, Ursulina and Ralf continued to have faith in their own abilities.

In 1964, they took part in the competition to design the Blissestrasse subway station. However, Hermkes was a member of the jury, which automatically disqualified Witte and Schüler’s entry from the competition. Surprisingly, however, their work did get to the judging stage. As it later transpired, this resulted in a dilemma. With Schüler/Witte’s piece receiving the best marks, the competition was doomed to failure. Nevertheless, the attention that the two received subsequently led to their being directly commissioned with designing the Schlossstrasse subway station in Berlin’s Steglitz district. Suddenly, all obstacles had been swept aside – both to their becoming self-employed and to their getting married.

Commissioned to design the above subway station, without further ado Schüler-Witte and Schüler broadened the scope of their activities to include a venture in the direct vicinity – to link up the A 104 freeway to the Steglitzer Kreuz intersection. It thus transpired that they produced the design for a complex interchange without having received a real request for it, one that crowned the subway station with ground-level buildings and a monolithic sculpture. However, since there was not enough money for the thus extended design, the couple altered the design yet again. What remained of it was a tower with three elevated stories above street level, for the implementation of which the young architect and her husband recommended private investors. The convoluted nature of the real estate market in West Berlin, which alternated between speculation and actual construction in the 1960s and 1970s, is legendary, particularly in Steglitz, with the result that the fate of this project, like a number of others, hung repeatedly in the balance and it was even canceled at one point. However, eventually the tower was realized in 1976; its upper stories, leased to the hospitality industry, were painted bright red and it boasted a gray shaft. It was not long until the building had been given its own nickname – Bierpinsel (Beer Brush). Today, disfigured by decorative but incomprehensible paintwork, the structure has gradually developed into that landmark that it was once intended to be.

Around this time, Schüler-Witte and her husband had the opportunity to put the stylistic vocabulary they had started to explore to the test on a considerably larger scale. North of the legendary AVUS sharp curve and opposite the radio tower (Funkturm), Berlin’s new International Congress Center, the ICC, was erected. An edifice of superlatives, it was 313 meters long, 89 meters wide, and almost 40 meters in height. In its interior it boasted 80 halls and rooms of sizes ranging from small to vast. These could accommodate from 20 to 9,100 users. Although it has been closed since 2014, the building has its own place in (West) German’s architectural history, having evolved into an Instagram favorite of kinds. It can rightly bear comparison with other buildings with a stylistic vocabulary inspired by modern technology – such as Richard Rogers’ Lloyd’s Building in London (1978–1986) and the Centre Pompidou, which Rogers realized in Paris in collaboration with Renzo Piano (1971–1979).

After the death of her husband in 2011, Schüler-Witte fought continuously and tenaciously for the preservation of this shimmering, silvery-gray spaceship which lends the entrance to the city from the freeway a look just as distinctive as the neighboring radio tower, together with which it has formed a congenial gateway to Berlin since its completion. Unpretentiously, Schüler-Witte was never concerned about her own name, her interest was in arguments guided by reason, the rational approach, as she explained during a guided tour of the building as part of the program accompanying a German Federal Chamber of Architects conference in Berlin in 2015. Time and time again there were ideas and concepts to be developed further. From a creative hub to housing for refugees. However, in 2021 Berlin’s then Finance Senator Matthias Kollatz (SPD) announced that no more money would be made available for doing anything with the ICC. In an interview with the Berliner Morgenpost newspaper Schüler-Witte commented "It is a disgrace for Berlin that the ICC is not going to be used anymore." Outraged, she railed "Don’t blame the building and all the opportunities it has to offer" for the fact that it is standing empty. "It is those in power on the political stage who are not lifting a finger (to do anything about it)." The building was to remain the pair’s only structure on this scale and consequently their main work. Schüler-Witte accordingly devoted 72 of the 227 pages in her book "Ralf Schüler und Ursulina Schüler-Witte. Eine werkorientierte Biographie der Architekten des ICC" to it.

The fact that the pair’s work consisted of more than just the ICC became clear when, in October 2010, Schüler-Witte and Schüler bequeathed their archives to Berlinische Galerie. Part of this has now been digitized and can be viewed. The bequest contains some 250 designs, of which only a fraction was realized. A glance at this oeuvre brings it home to us that the horizons of the two were wider than that first impressions might suggest. They came up with their design for the leisure center "Farahnaz-Region" for Iran, for example, in the period between 1974 and 1976. Another design for a congress center in Abu Dhabi dates from between 1981 and 1983. Neither of these got past the project stage.

Not only their monument to Rosa Luxemburg but also the column commemorating Karl Liebknecht on the Lichtensteinbrücke (Lichtenstein Bridge) in the Tiergarten district of Berlin (1986–7) on the banks of the Landwehrkanal (Landwehr Canal) did, by contrast, get built. Moreover, over time, a residential complex by the name of "Die Augsburg" (The Augsburgers) was gradually erected on Augsburger Strasse in the Schöneberg district of Berlin (1979-91), as was the extension to the Moabit Criminal Court (1987–91) and the nurses’ hall of residence at the Virchow-Klinikum in the Wedding district (1989–93). After the fall of the Berlin Wall, they also designed the secretariat services building for the city hall in Berlin’s Hellersdorf district (1991–8), later adding the "Pyramide" municipal exhibition center (1994) on the corner of Riesaer Strasse and Jenaer Strasse and the cupola over the subway station on Nollendorfplatz (2002). As only emerged from a death notice at Berlinische Galerie in mid-July, Schüler-Witte passed away as long ago as May of this year. The architect survived her husband by 11 years. The couple’s buildings, including two real icons of Berlin, will endure. 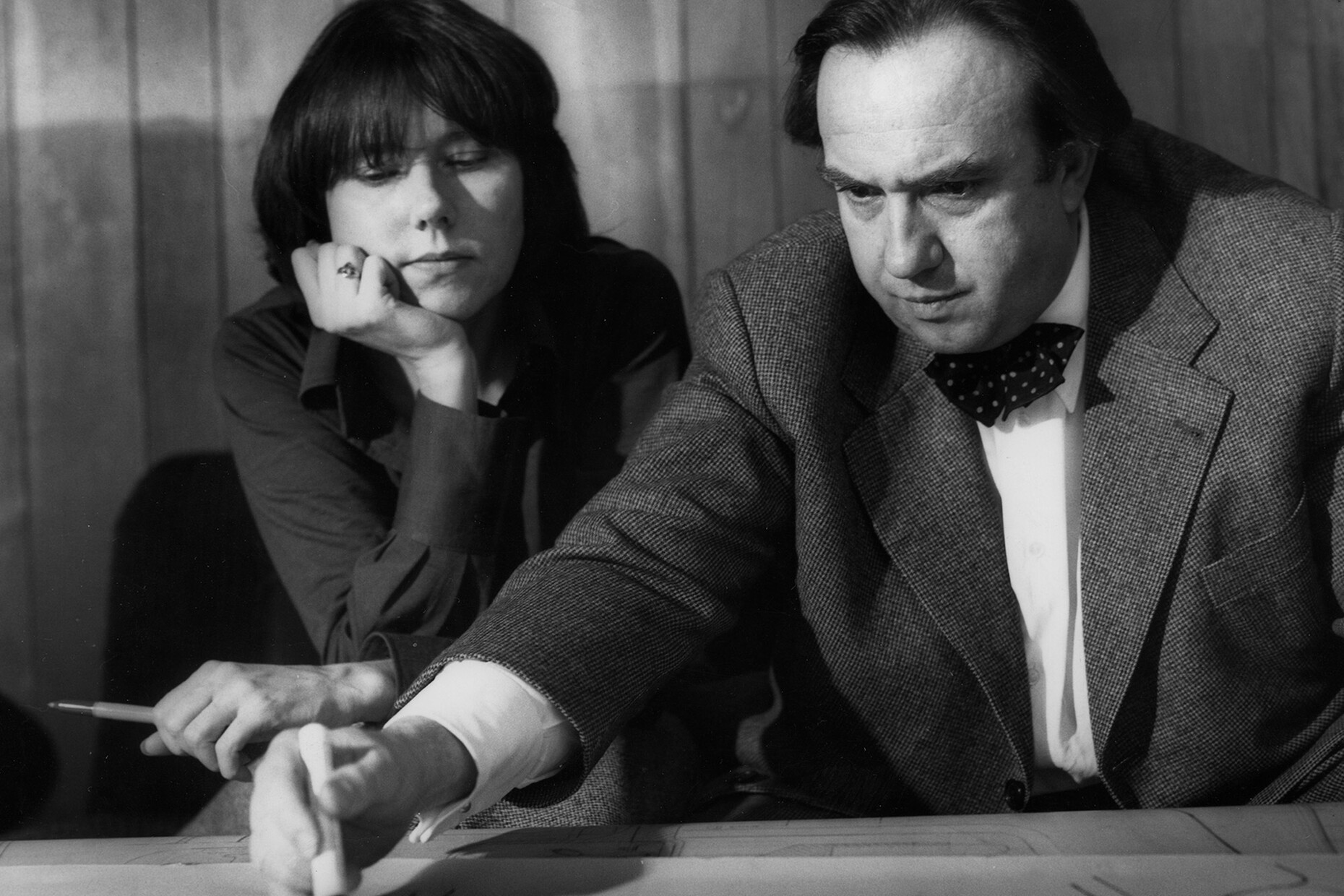 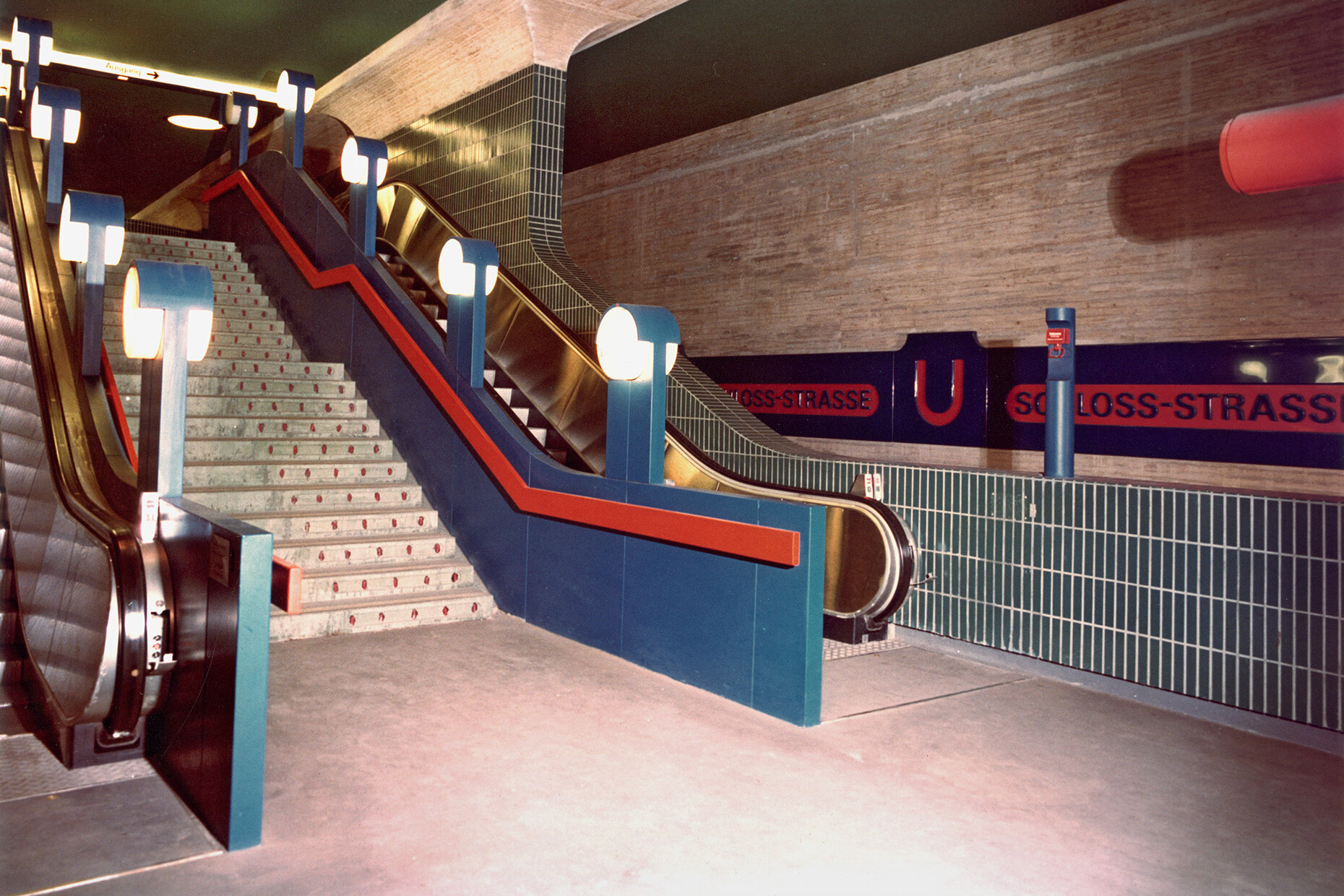 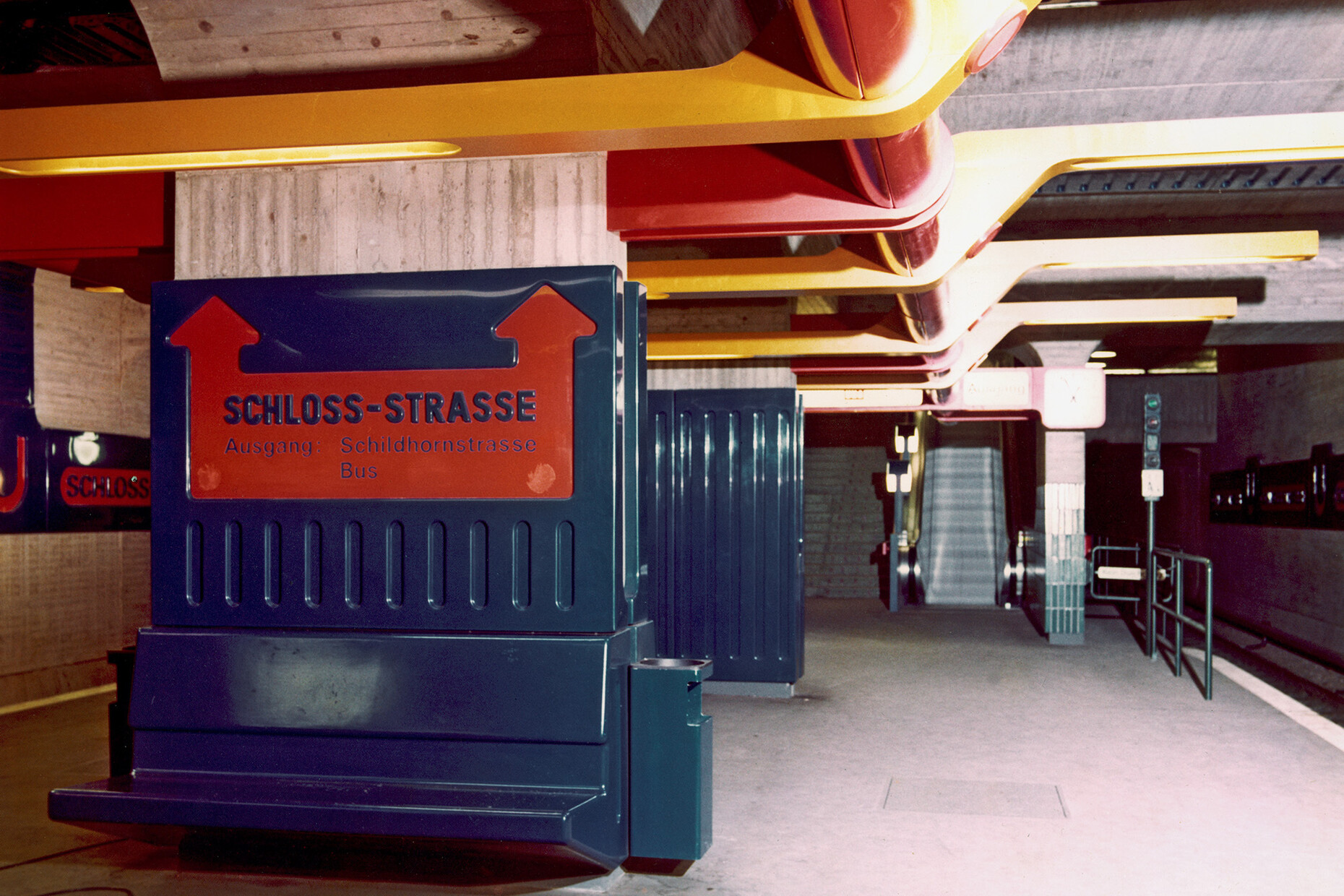 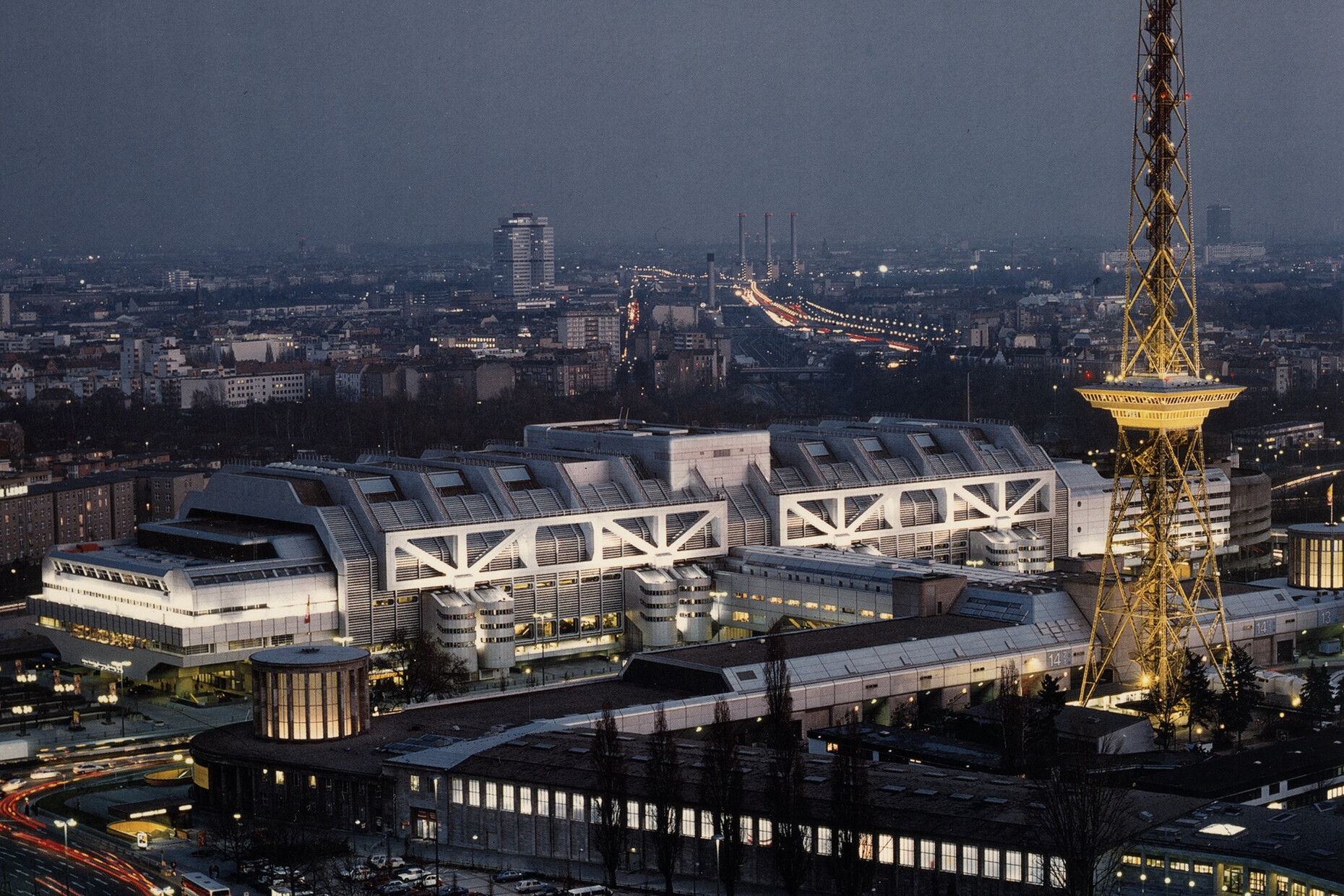 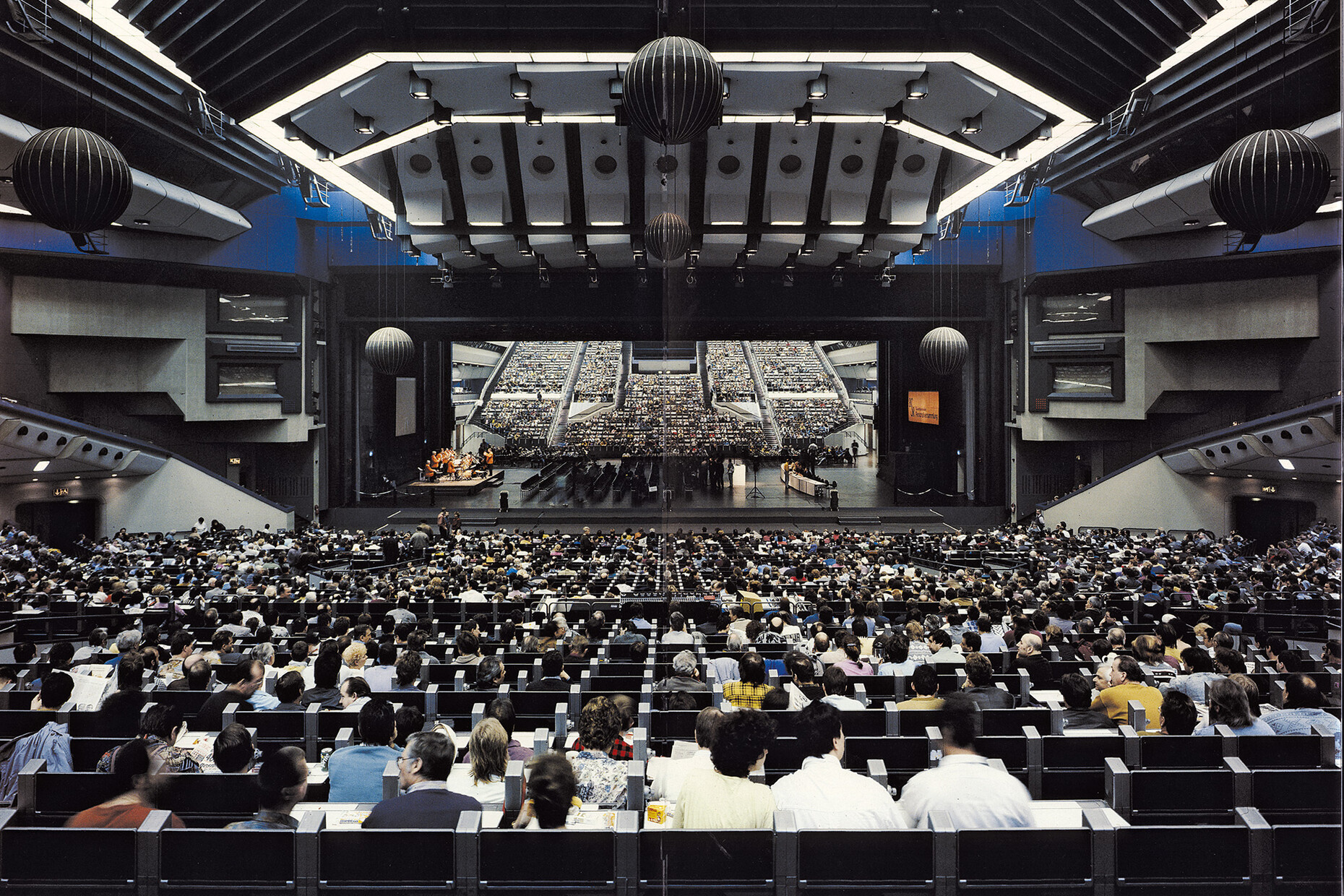 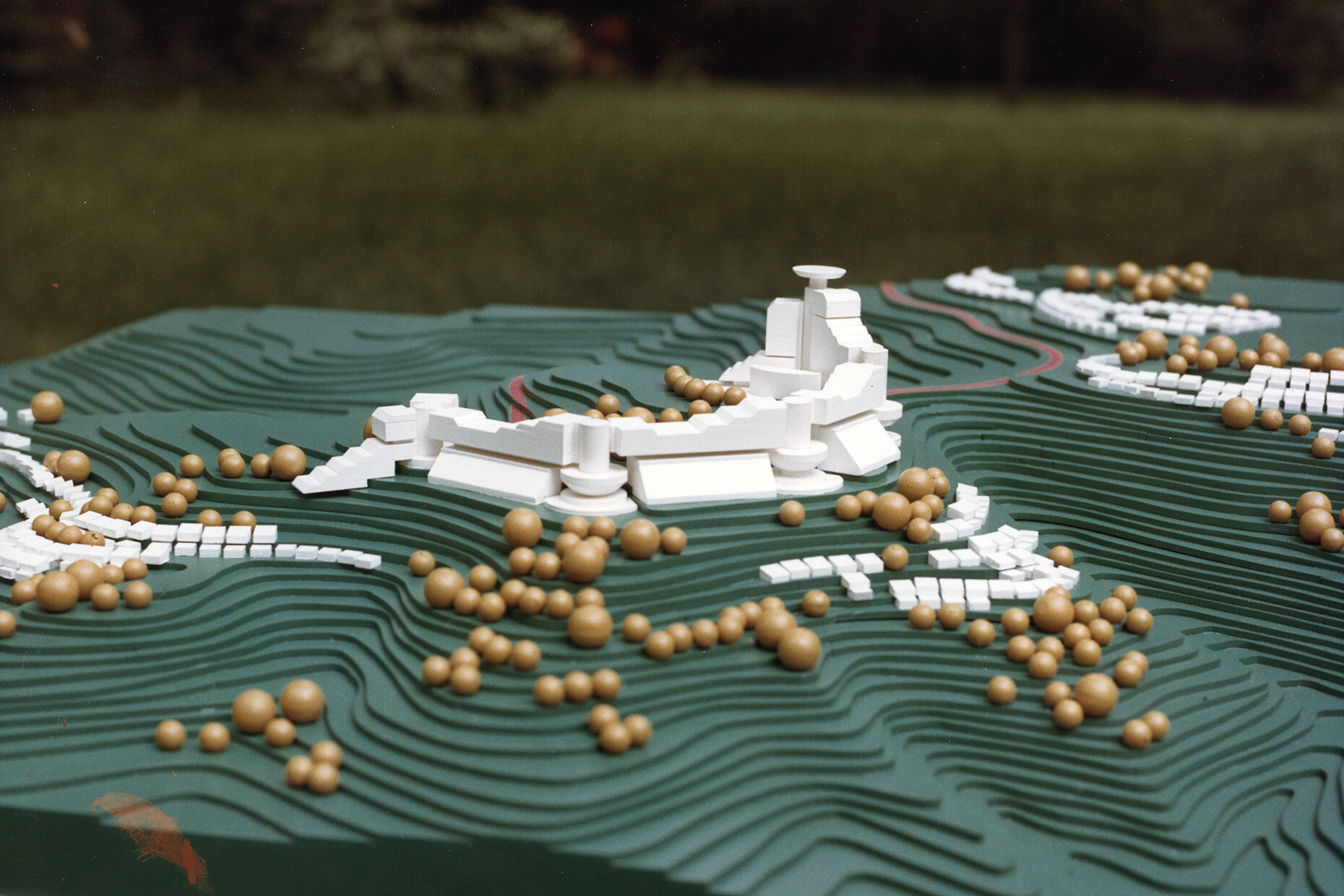 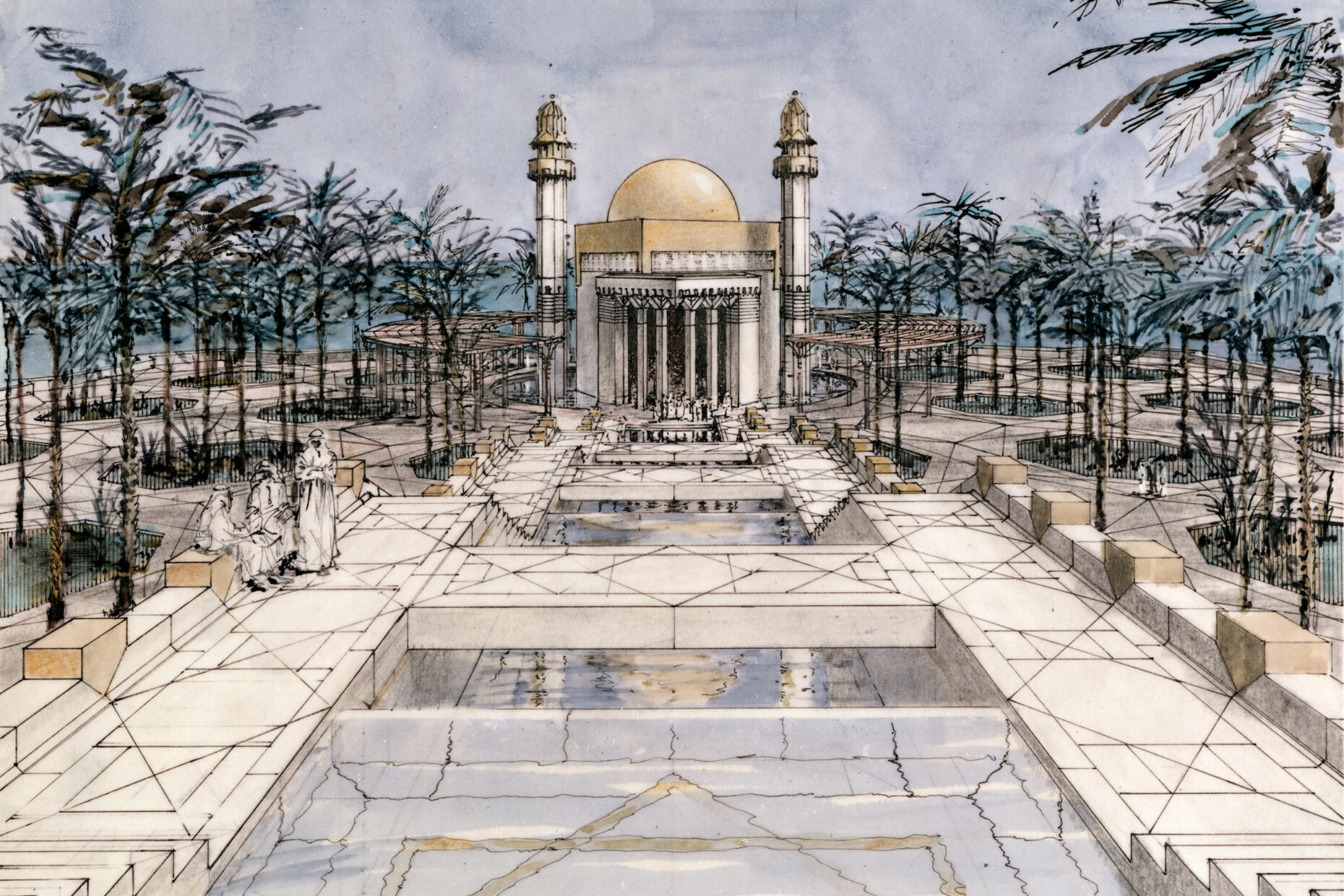 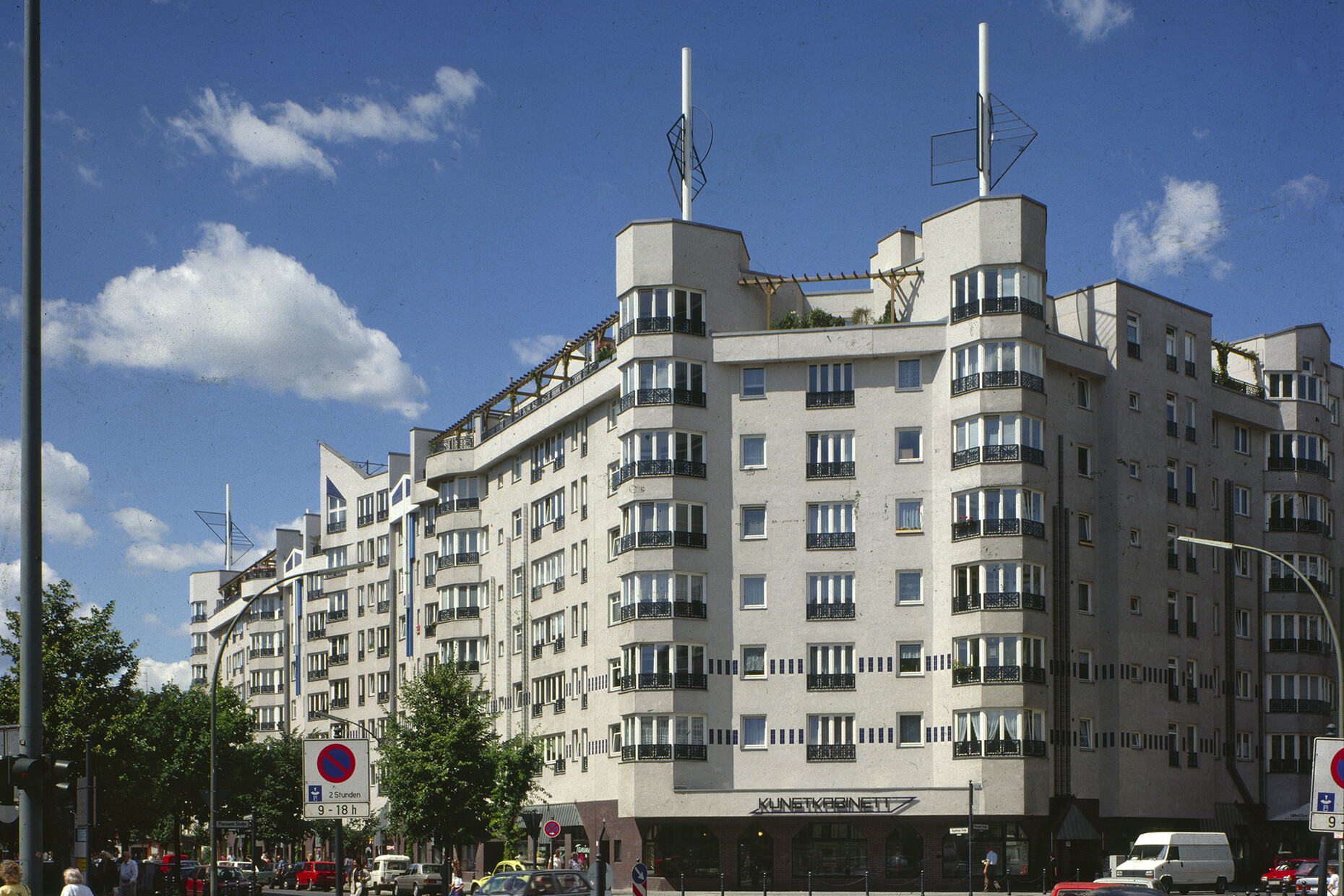 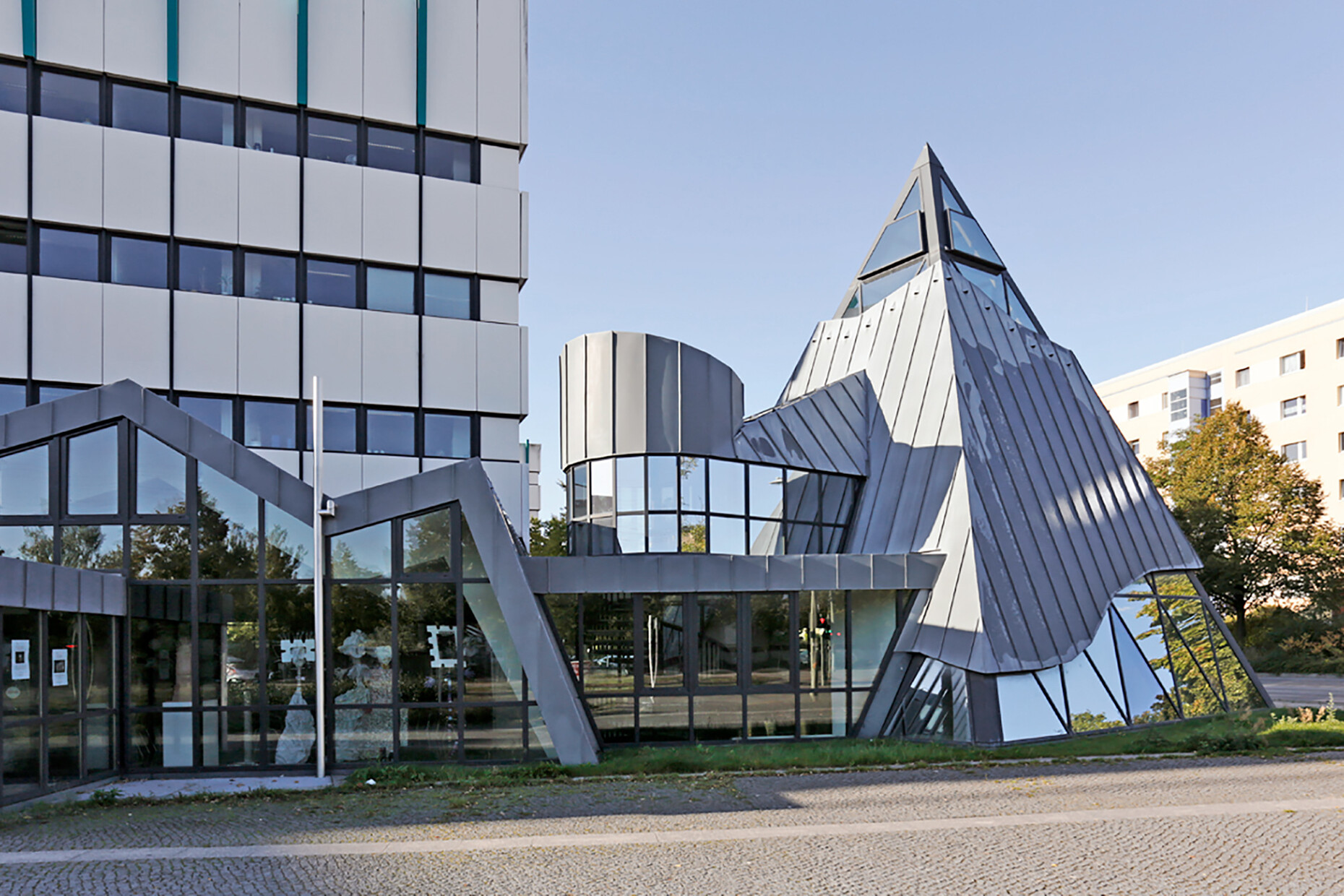 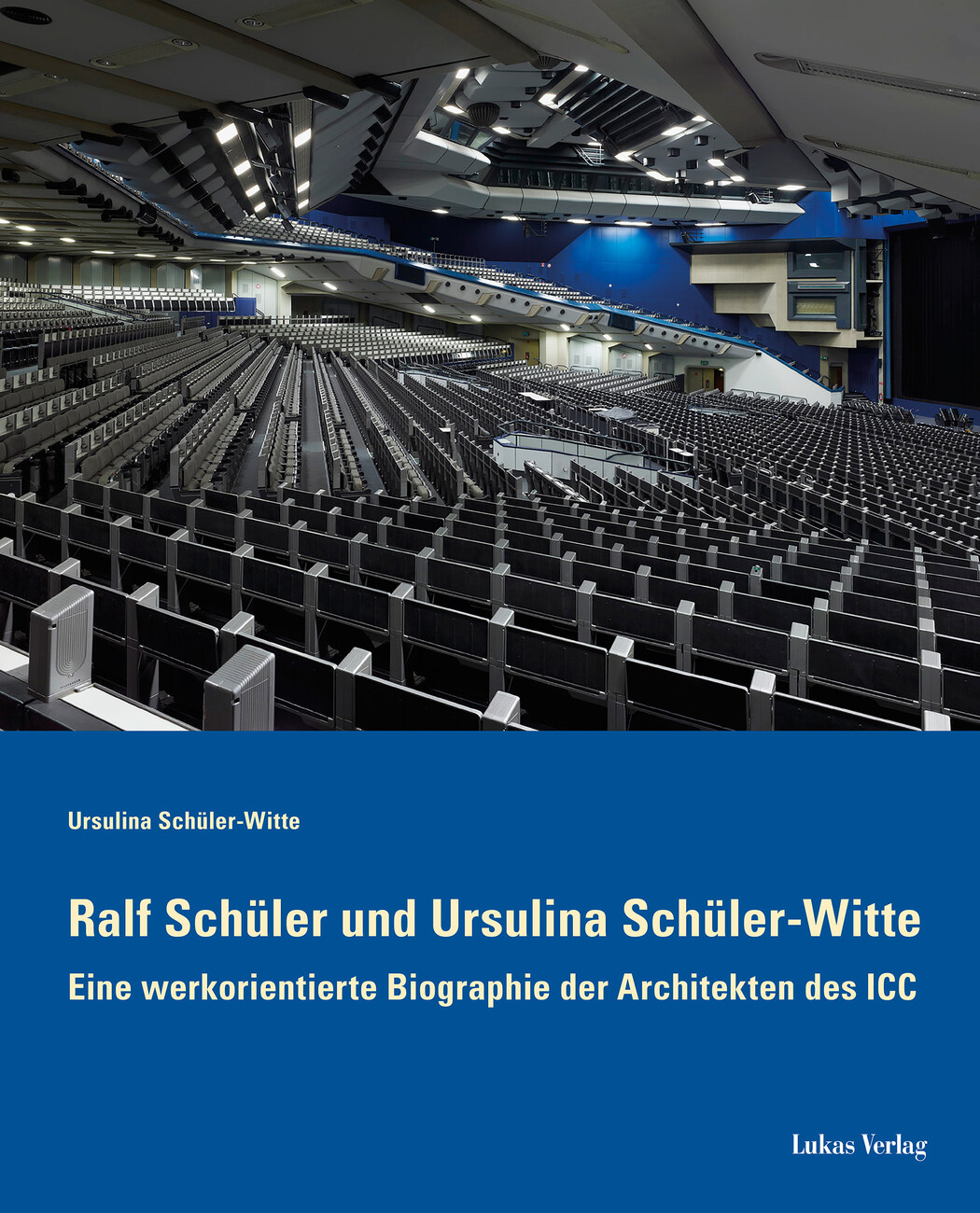 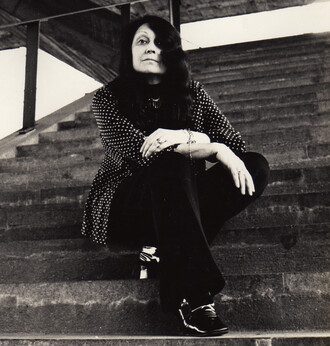 In our series “Spotlight on Women Architects”, we are introducing the work of female architects to you at regular intervals such as a great forgotten figure of Tropical Modernism: The multi-faceted work and impressive buildings of Italian-born Brazilian architect Lina Bo Bardi has greatly enriched Brazilian architecture. 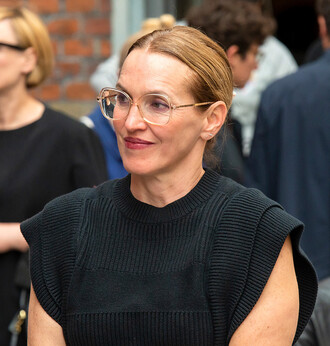 In our series “Focus on Female Architects”, we are introducing the work of female architects to you at regular intervals, such as that of Tatiana Bilbao, whose credo is “Planning together, building together, living together”. 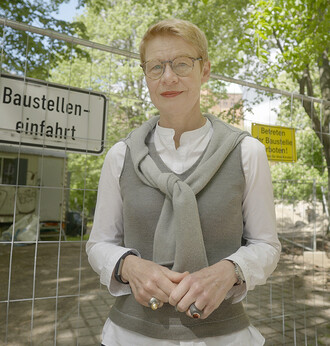 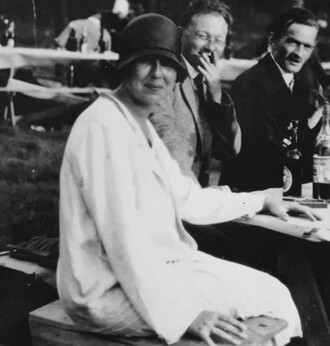 In our new series "Spotlight on Women Architects" we will regularly present the work of female architects – starting with Marlene Moeschke-Poelzig and the construction of the "Villa Poelzig" in Berlin that ended up being demolished.
Advertisement