Two new products have been added to the collection, hybrids of a shelving unit and an asymmetrical chest, extending outwards on one side and thus freeing up space on the other. Taking as given the break with regularity of line, this piece plays with differing volumes on each level, with harmony preserved by the rightness of proportion so dear to Christian Werner.

Its sobriety is announced by the monochrome appearance of the back panel and shelves, but the imagination behind it is expressed by the presence of the bronze-coloured main stem and then echoed by the handles.

Dark walnut strongly contrasts with the lacquer finishes on offer, or holds its own in the all-walnut version. 3 new lacquer colours have been added to the existing offer : moutarde, noir and brique. The chest, always in dark walnut, appears to be set into the shelving unit yet stands out a little more visually given the junction line of the doors, which are of differing widths, making the junction appear off-centre.

The shelving unit, on its own, is much more sober, minimal even, although the juxtaposition of a number of elements reveals the asymmetry of the stem and the unequal storage volumes. When a shelving unit, or perhaps several shelving units, is placed to the left of where a chest is to be located, one creates a more imposing, modular ‘third way’.

Units are fixed to the wall via two adjustable high wall brackets, with only minimal support (set back) at ground level, which brings lightness to the piece. 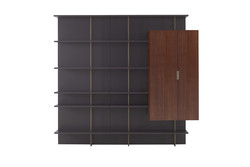 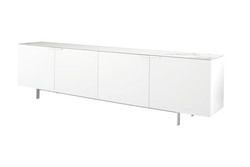 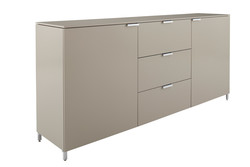 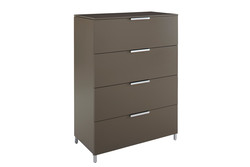 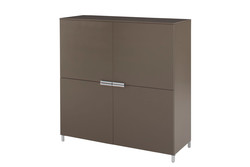 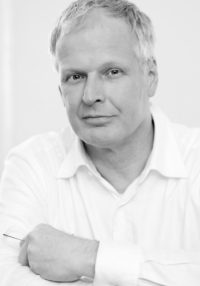